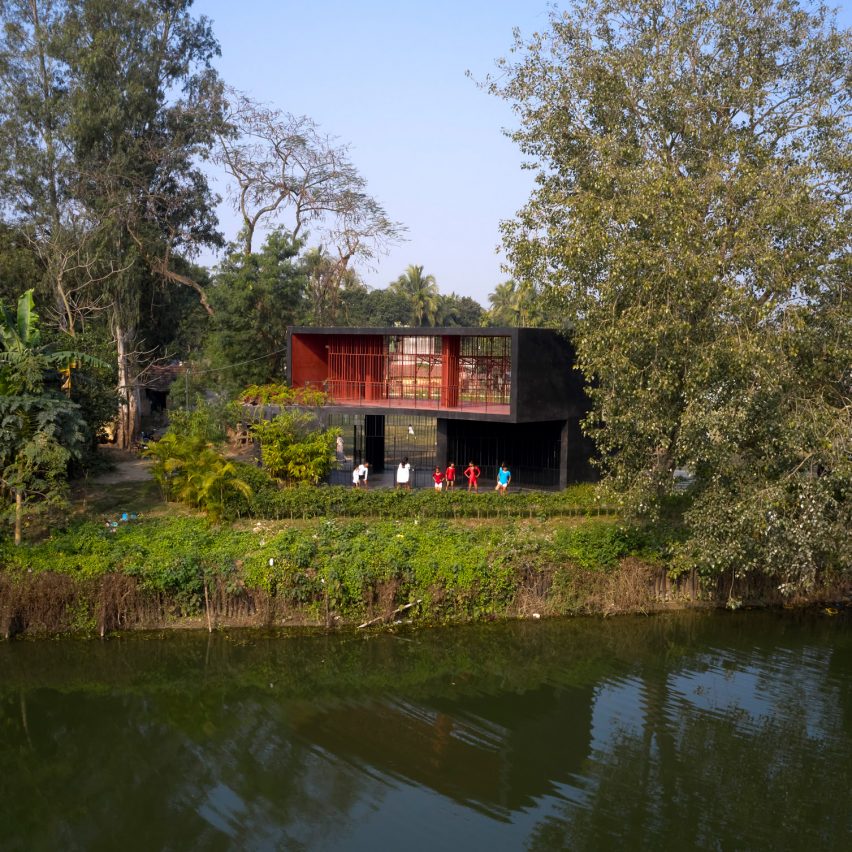 Architecture studio Abin Design Studio has combined a clubhouse with a small stand for spectators alongside a football pitch in the city of Bansberia, India.

Built for a youth football club in Bansberia in the Indian state of West Bengal, the clubhouse stands between the playing field and a large lake.

Abin Design Studio designed the multi-purpose structure to provide locals with a place to watch matches and training sessions and take advantage of views across the lake.

“It was influenced by the location of the playing field, minimal corner space, functional demands and viewing spaces for a holistic football ground.”

The clubhouse is formed of two stacked rectangular blocks that have been slightly rotated to give the upper storey direct views of the football pitch.

A staircase to this upper floor doubles up as a raked seating gallery for parents and spectators to watch matches.

The building’s lower floor contains a sheltered community hall that opens on to a seating area overlooking the lake. There are also male and female toilets as well as a store and pantry, as previously the club had no access to clean water.

The upper floor contains a multi-purpose hall with views across the lake and the pitch, which has been embraced by the community.

“Post the construction of this clubhouse, it has become the epicentre for their cultural and social activity,” said Chaudhuri.

“From sports to all kinds of festivals, the club became a point of regeneration of social life for the neighbourhood.”

Funded through a Bengal state government grant aimed at promoting sports and extra-curricular activities to young people, the building was designed to be inexpensive to construct and maintain.

The structure was built from pigmented concrete by local workers with additional financial support from the local community.

“For us, it was an opportunity to intervene through architecture bringing awareness and demonstrating how architecture can expand its sphere of influence further than defining the visual and material culture of its immediate context,” said Chaudhuri.

“It showcases how design and technology are adapted to suit local constraints, and most importantly, celebrates the cohesive efforts of local influencers and the huge amount of people involved in the successful realisation of peri-urban projects.”

Abin Design Studio is a Kolkata-based architecture studio that was established by Chaudhuri in 2005. It previously designed a terracotta-brick community centre in Bansberia and a concrete Hindu temple that was showcased in a film by architectural photographer Edmund Sumner.