New York studio AvroKO has overhauled a hotel in Hong Kong‘s Kowloon area, opening up its core to form a triple-height atrium and restaurant space, and refreshing guest facilities.

Eaton HK is the second hotel to open under the Eaton moniker, following the first in Washington DC earlier this year. 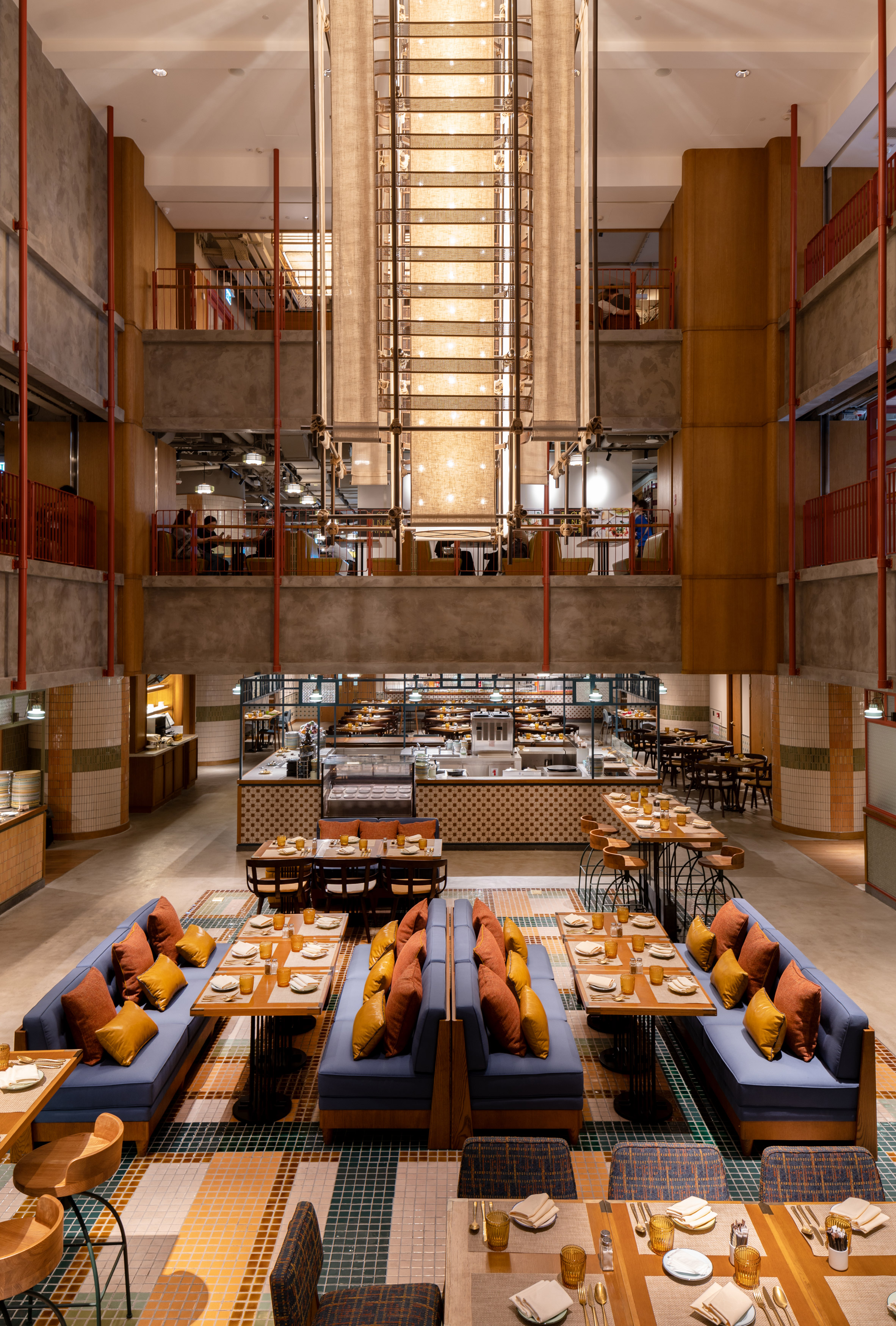 The concept for the chain includes merging public and private spaces, and incorporating a co-working space and membership club into the hotel. In Hong Kong, facilities also include an art museum, a cinema, a radio station, a bar and numerous eateries, in addition to guest rooms, a gym and rooftop pool. 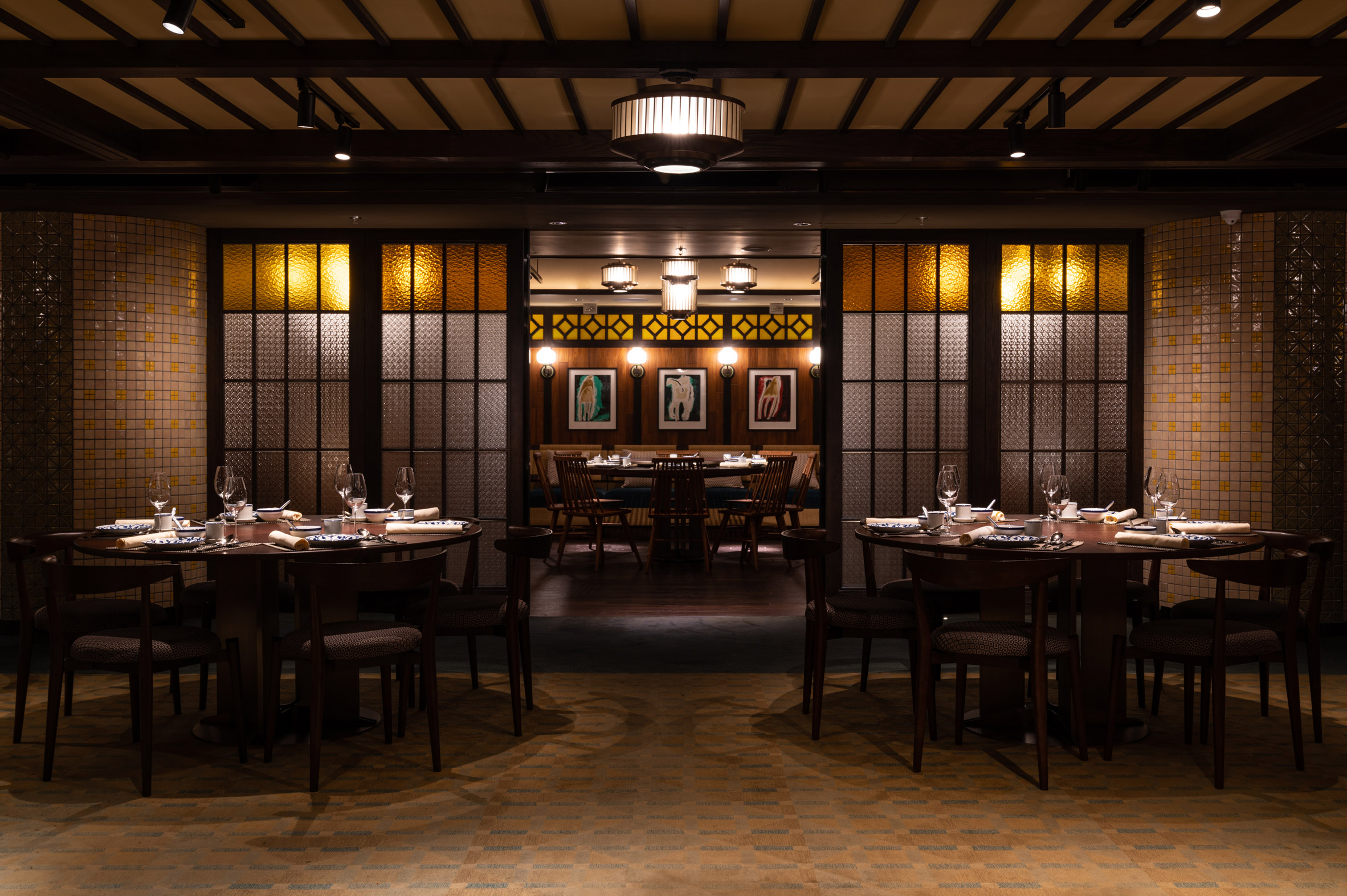 First built in the 1970s, the towering structure features meandering corridors and subterranean levels. Before Eaton took over the property, the hotel was popular with Mainland Chinese tourists for its affordability, and also served as a sort of shopping mall. 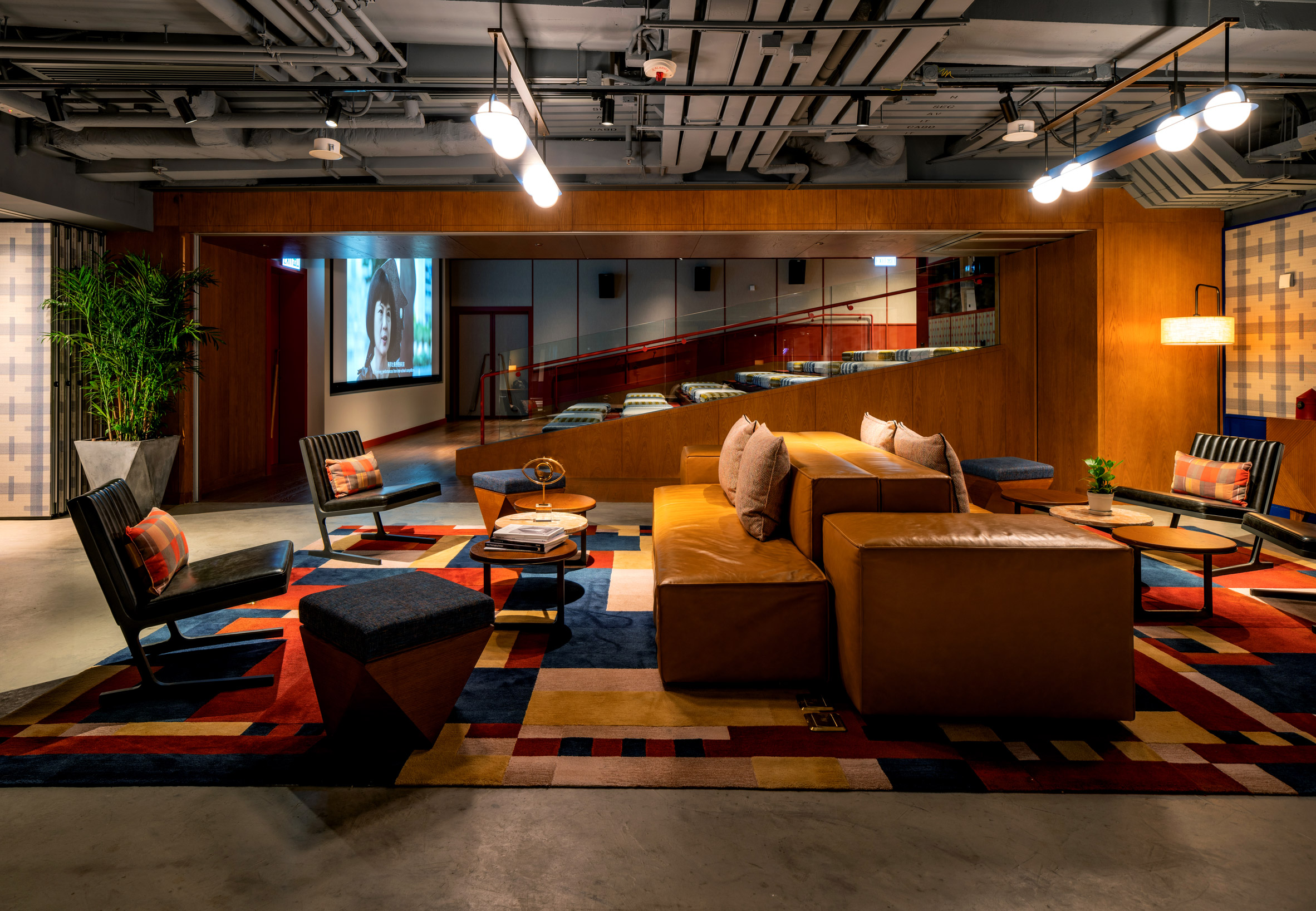 AvroKO overhauled the project by working with the existing building, to complete the hotel in just two years. Lead designer Phillip Pond worked closely with the hotel’s founder, Katherine Lo, who acquired the building from her father when he asked her to reimagine Eaton.

“[The building] has this reputation of being an old, tired workhorse, and referenced as ‘that old thing’,” said Pond of the existing hotel. 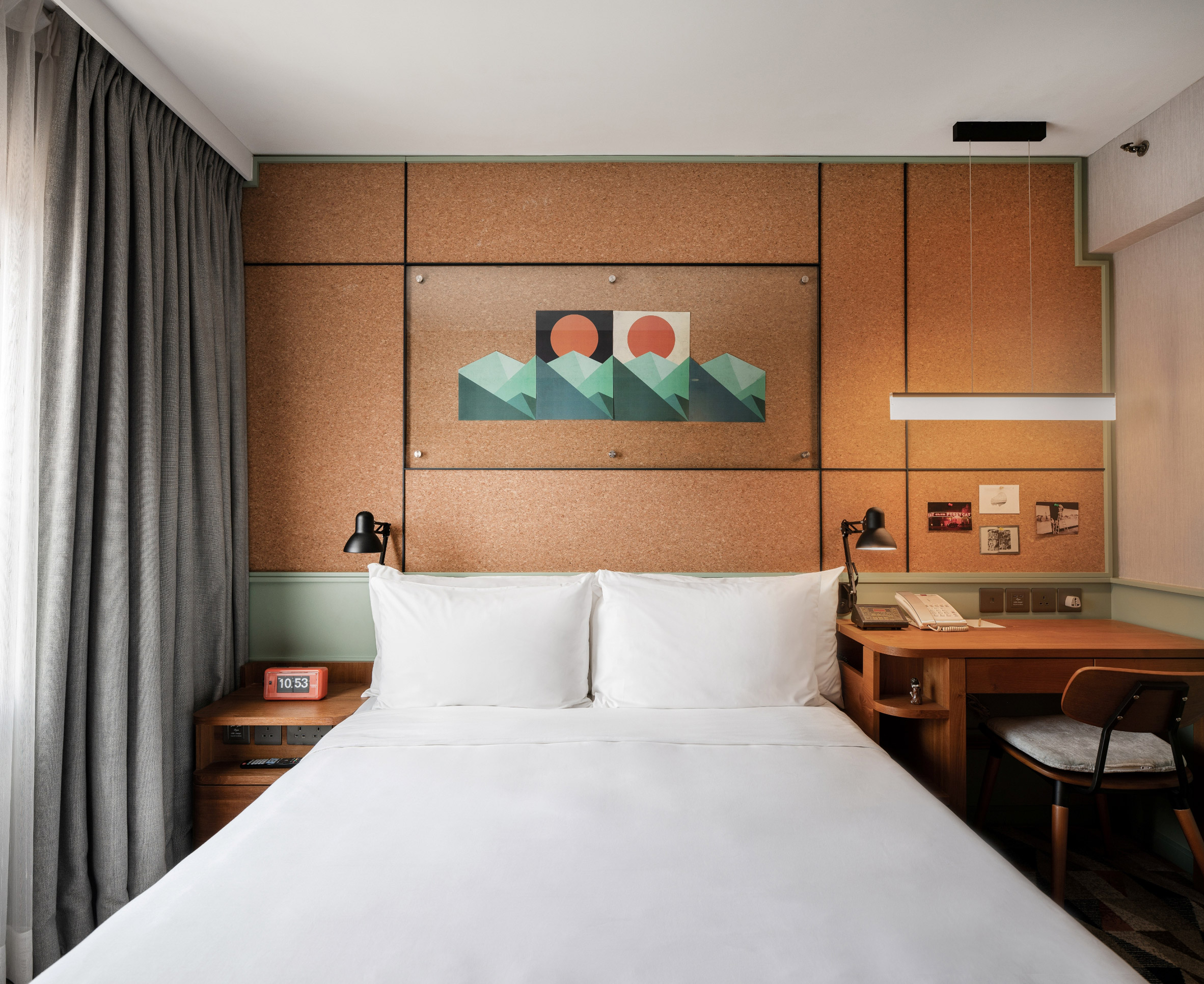 A notable feature of the redesign is a new atrium with a vast below-grade restaurant, The Astor, with pops of orange, mustard and dark blue. Here are eight live cooking stations, evocative of Hong Kong’s cha chaan teng [tea restaurant] culture, paired with Asian hawkers or open-air food markets.

“Every Sunday, my father would take our whole family to cha chaan teng,” said Lo, who grew up in Hong Kong and went to school around the corner from the hotel. “It is in this spirit of nostalgia for old Hong Kong food and family that served as the inspiration.” 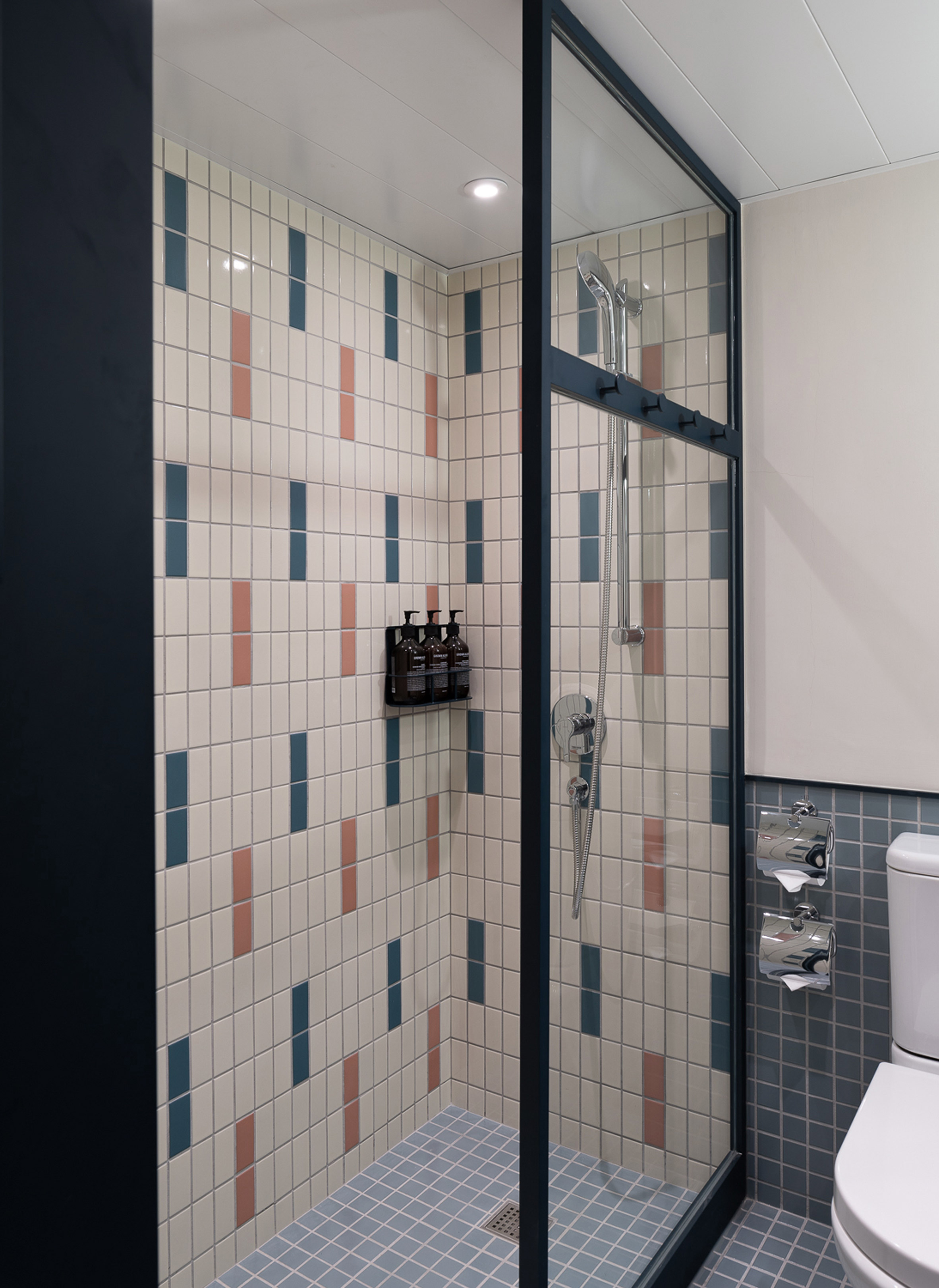 Even further underground is Michelin-starred Cantonese restaurant Yat Tun Heen. The hotel lobby is found on the ground floor, and a food hall with 10 vendors is open to the public upstairs.

On the fourth level is a co-working space and bar, with a terrace overlooking the Jordan neighbourhood of Kowloon. 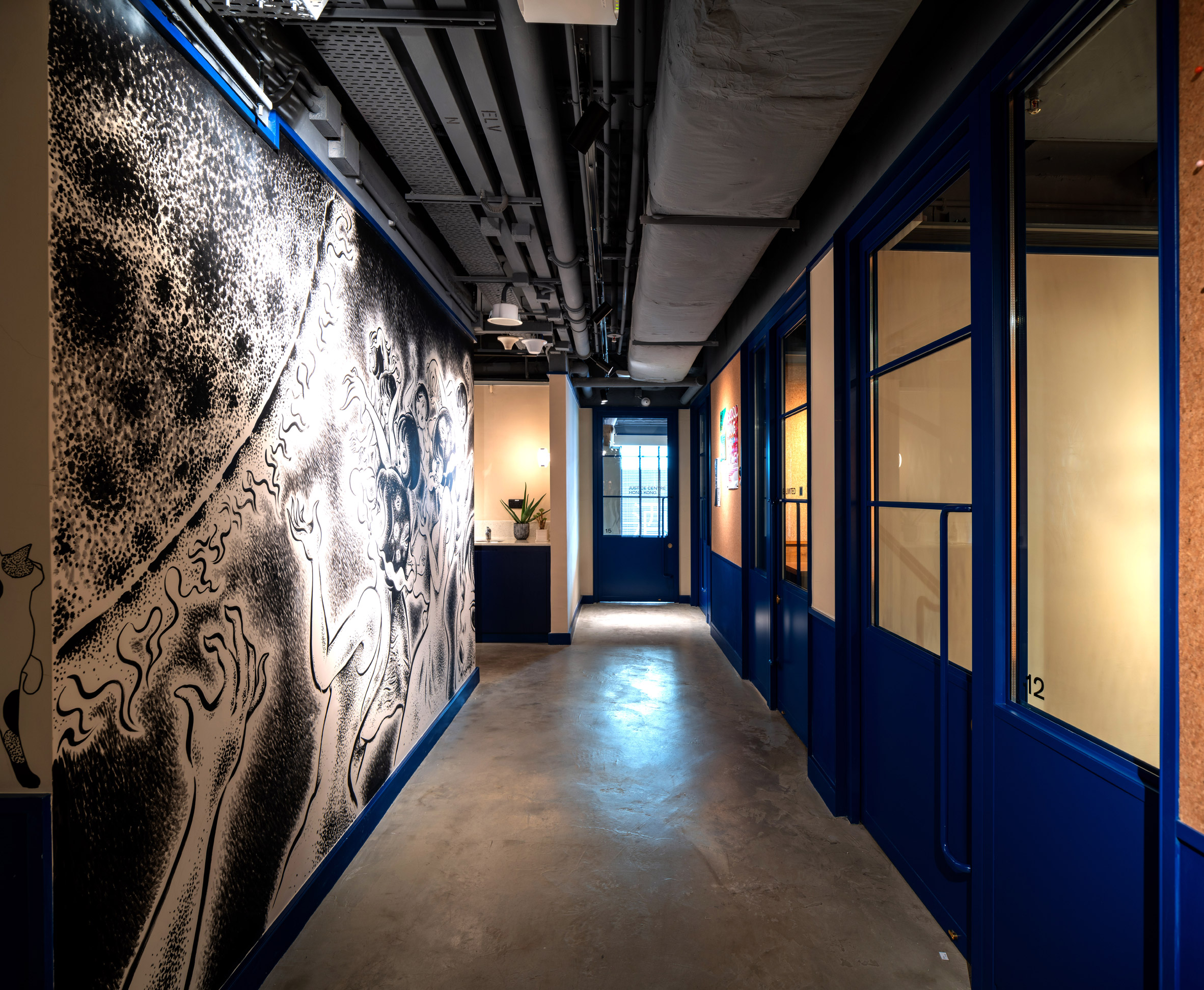 “The biggest inspiration was Wong Kar-wai arthouse films from the 1990s in Hong Kong, which were all shot in this neighbourhood,” said Lo. “We based the design process on [Kowloon], which is really old and gritty, and there are neon signs and it has hardly changed in 20 years.” 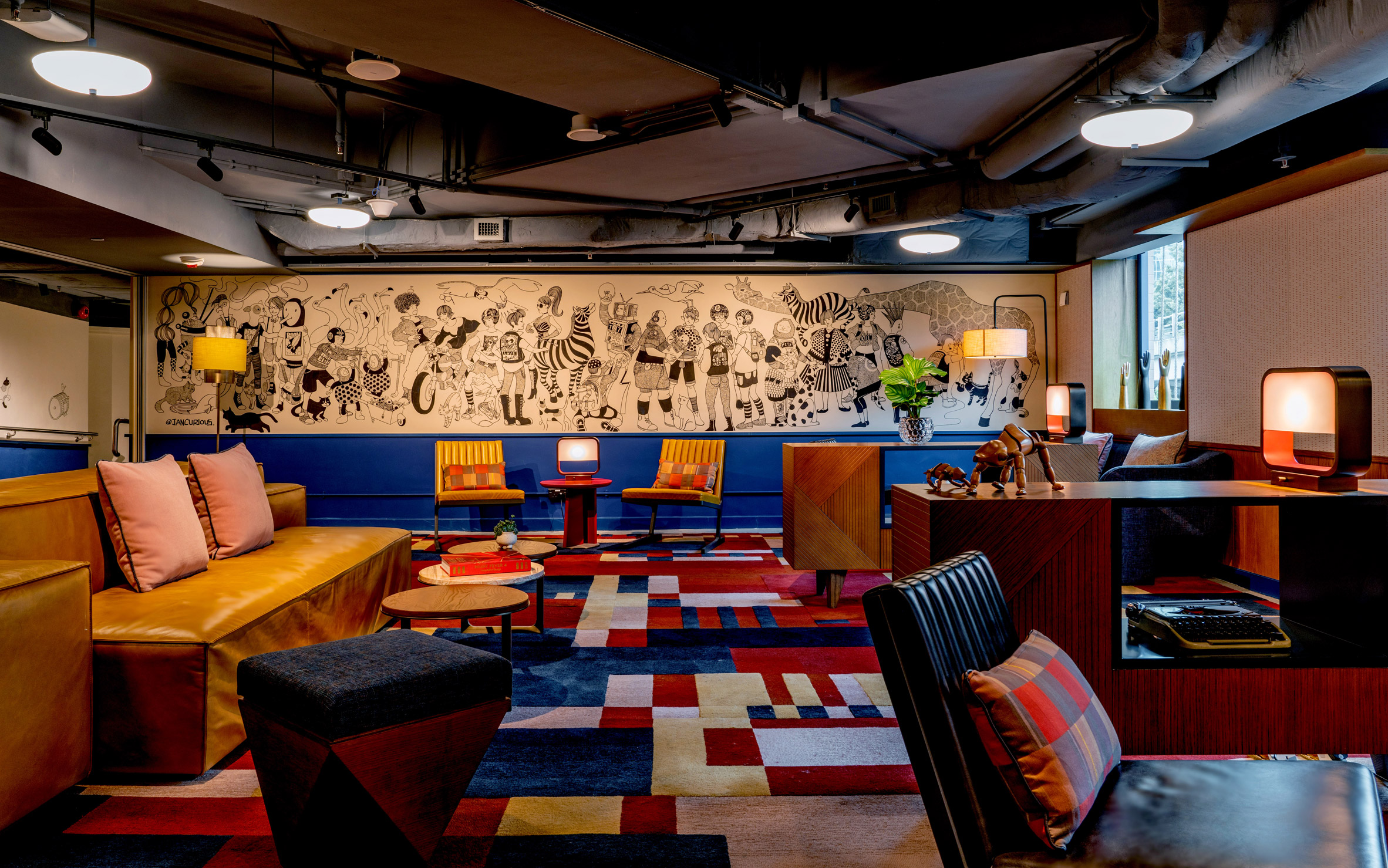 Guest rooms were retrofitted with updated surfaces and furnishings only. Tiles in the bathroom pay homage to the hundreds of tiled skyscrapers in Hong Kong, while steel doors and cabinets reference the grated doors for closing-up local shops. 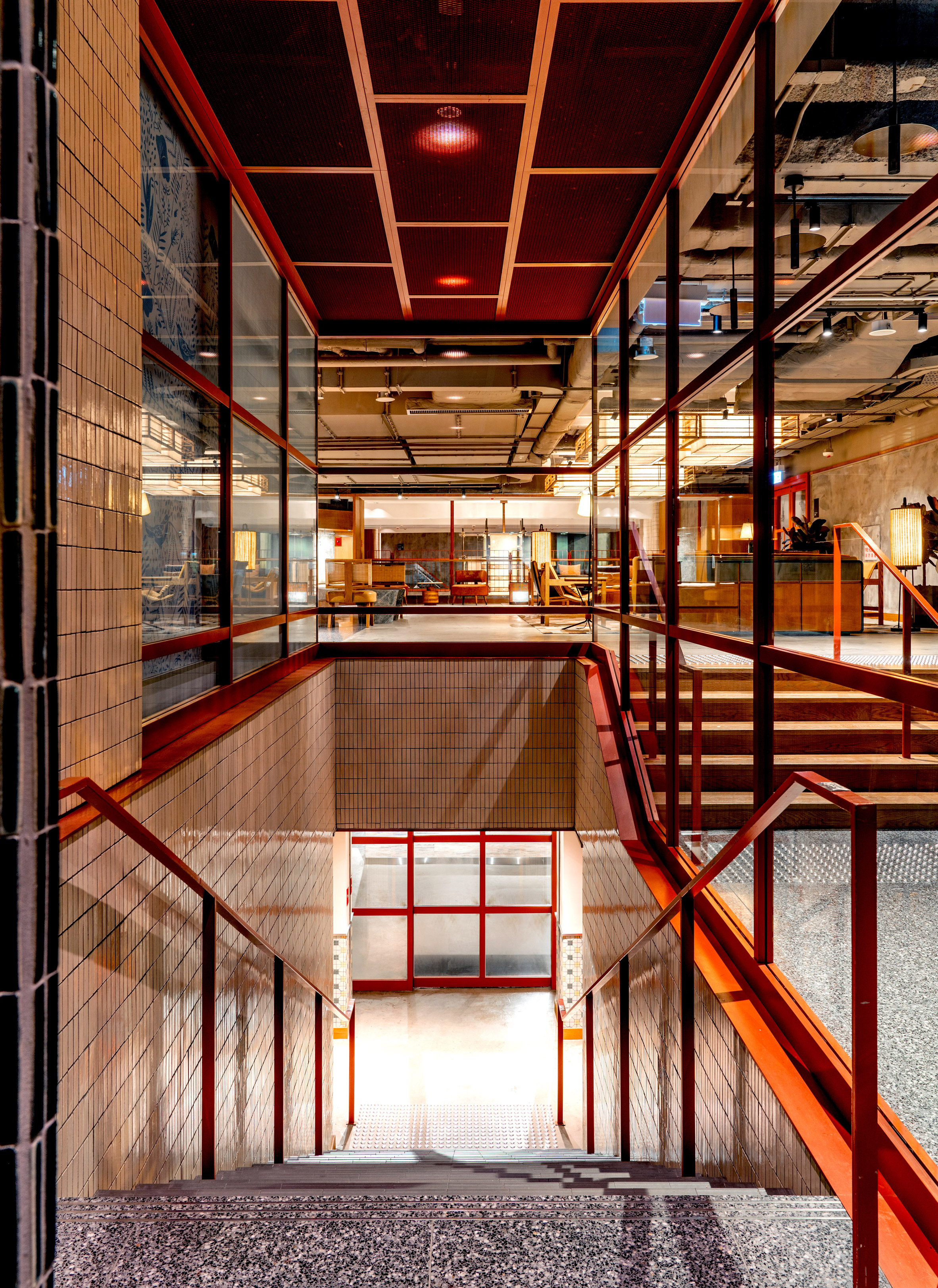 “There’s a lot of retro nostalgia for old Hong Kong in the details, like the tiles [in the bathrooms],” Lo said. “A lot of the millwork and metalwork was based on traditional local designs.”

Cork accent walls and dark wood furnishings are in oak, ash and teak soften the rooms. Geometric carpeting and artwork with hues of peach, teal, cream and navy add a retro vibe, and provide a link to the building’s quirky, somewhat postmodern architectural style. 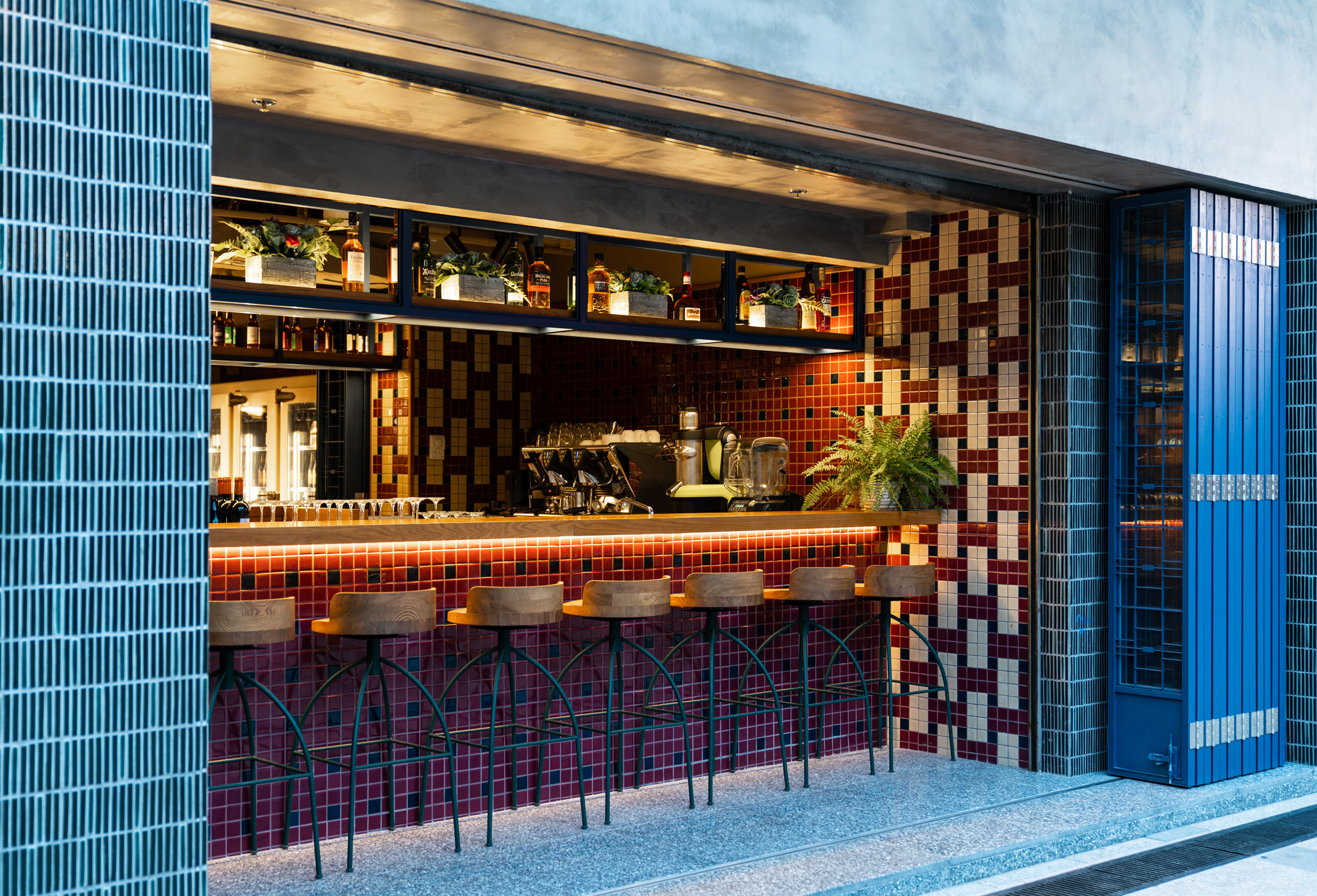 “We stumbled across images of Taliesin [Frank Lloyd Wright’s school in Wisconsin] and saw all of the colour and pure geometry, with wood and stone, and it felt very Hong Kong,” said Pond.

“The playfulness of [Wright] who had done everything and was a modernist at heart, but he had a sort of an Asian mindset as well that might have informed some of his geometry and approach to space.” 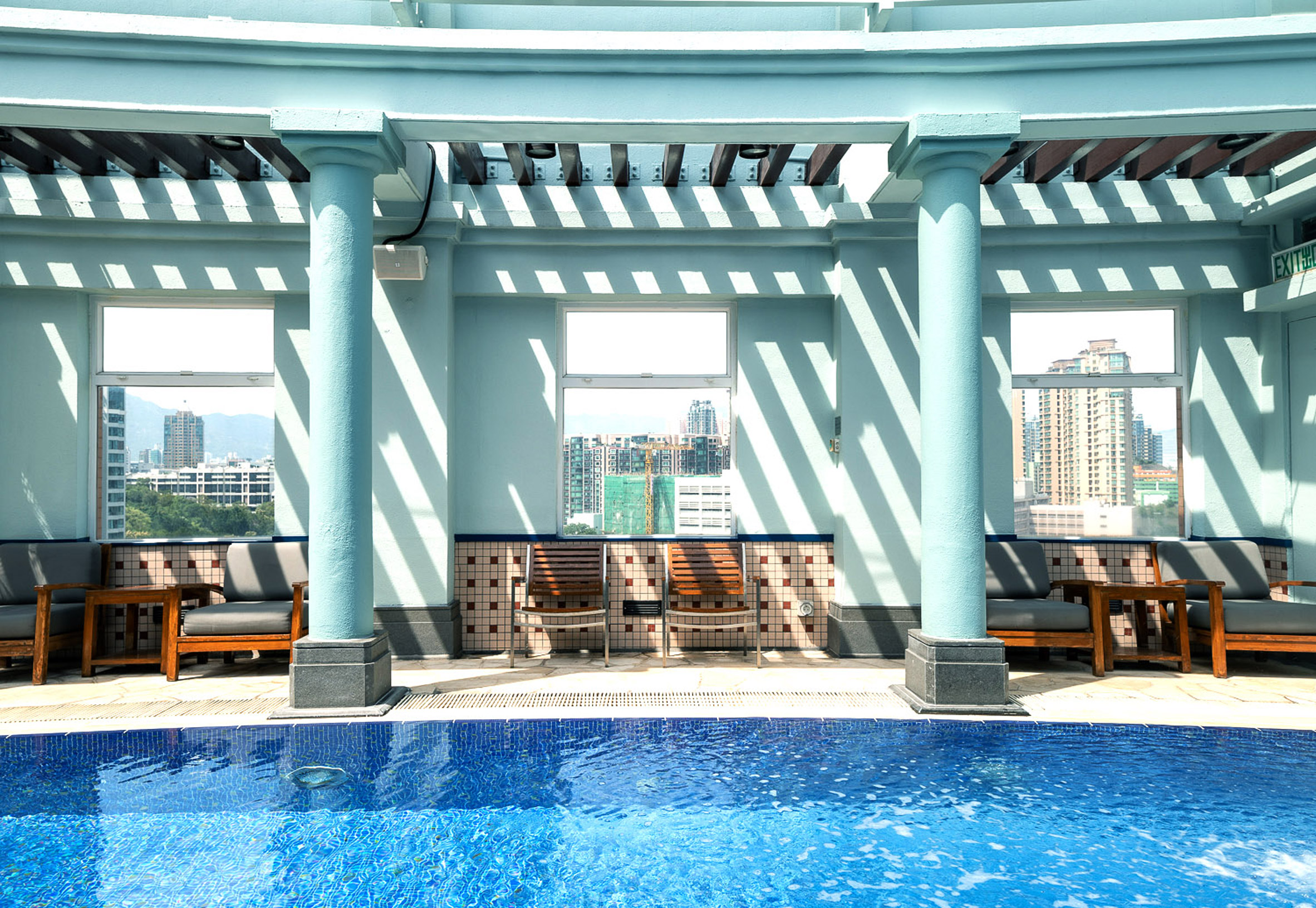 Eaton HK is a landmark in Kowloon’s emerging Jordan neighbourhood, with its curved pillars rising high at the corner of a busy intersection. Kowloon is often referred to as the “Brooklyn of Hong Kong”, as it is separated by water from Hong Kong Island and is where many artists are based.

Also in the area, the M+ Museum by Swiss firm Herzog & de Meuron is currently under construction. The firm has recently completed the Tai Kwun arts centre across Victoria Harbour.

Photography is by Lit Ma.