Bad Lab Beer Co brews and serves 16 draft beers on its site in Somersworth, an hour’s drive north of Boston. 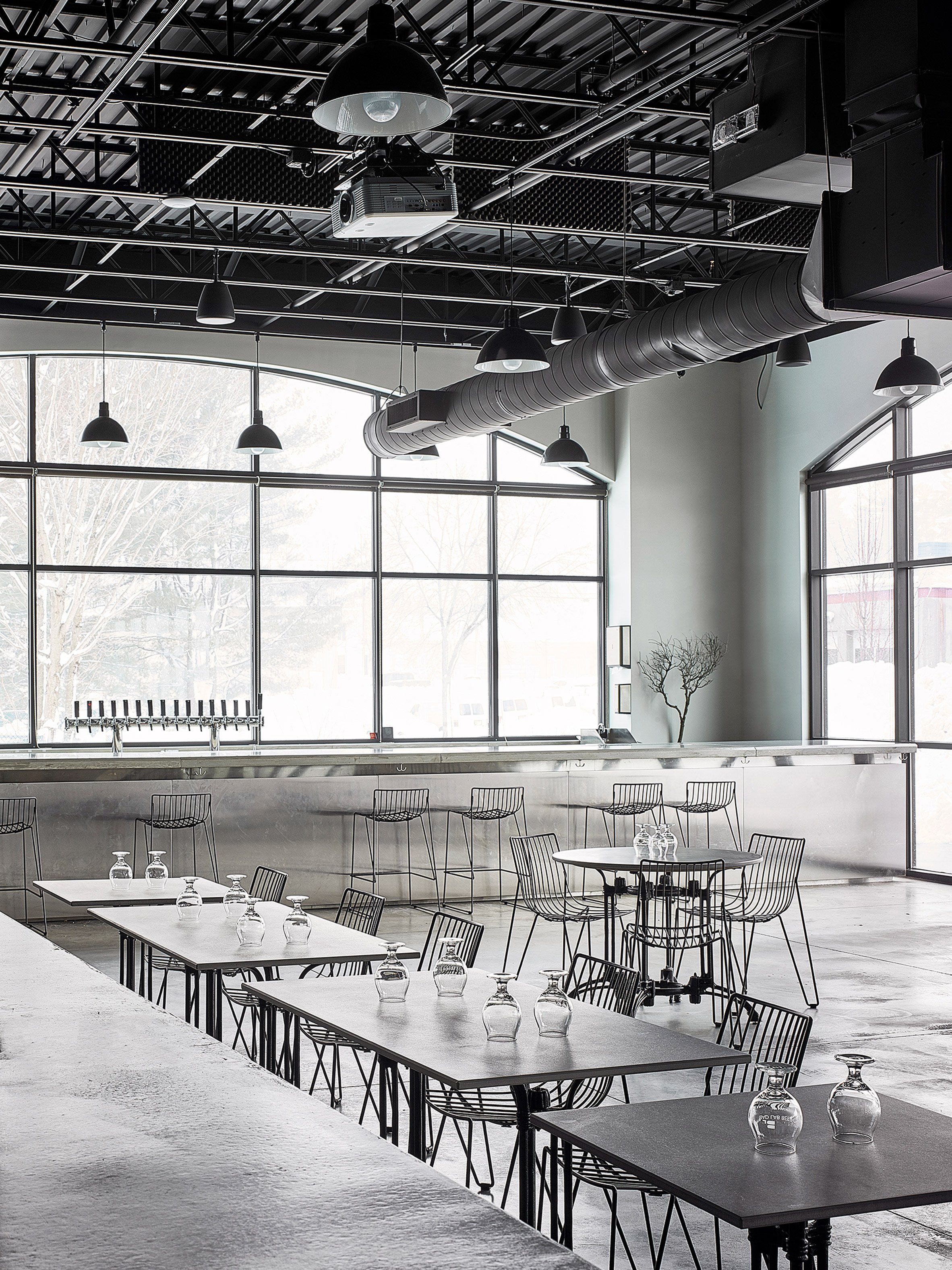 Housed within an old industrial building, the brewery features concrete floors, exposed ducts and large windows with black steel frames – all of which are highlighted by the pared-back interiors.

Based in Stockholm, Richard Lindvall led the design and drew influences from the architecture. “I wanted to build around the original details, only adding a few other materials to accentuate and compliment the simple and industrial feeling of the space,” he said. 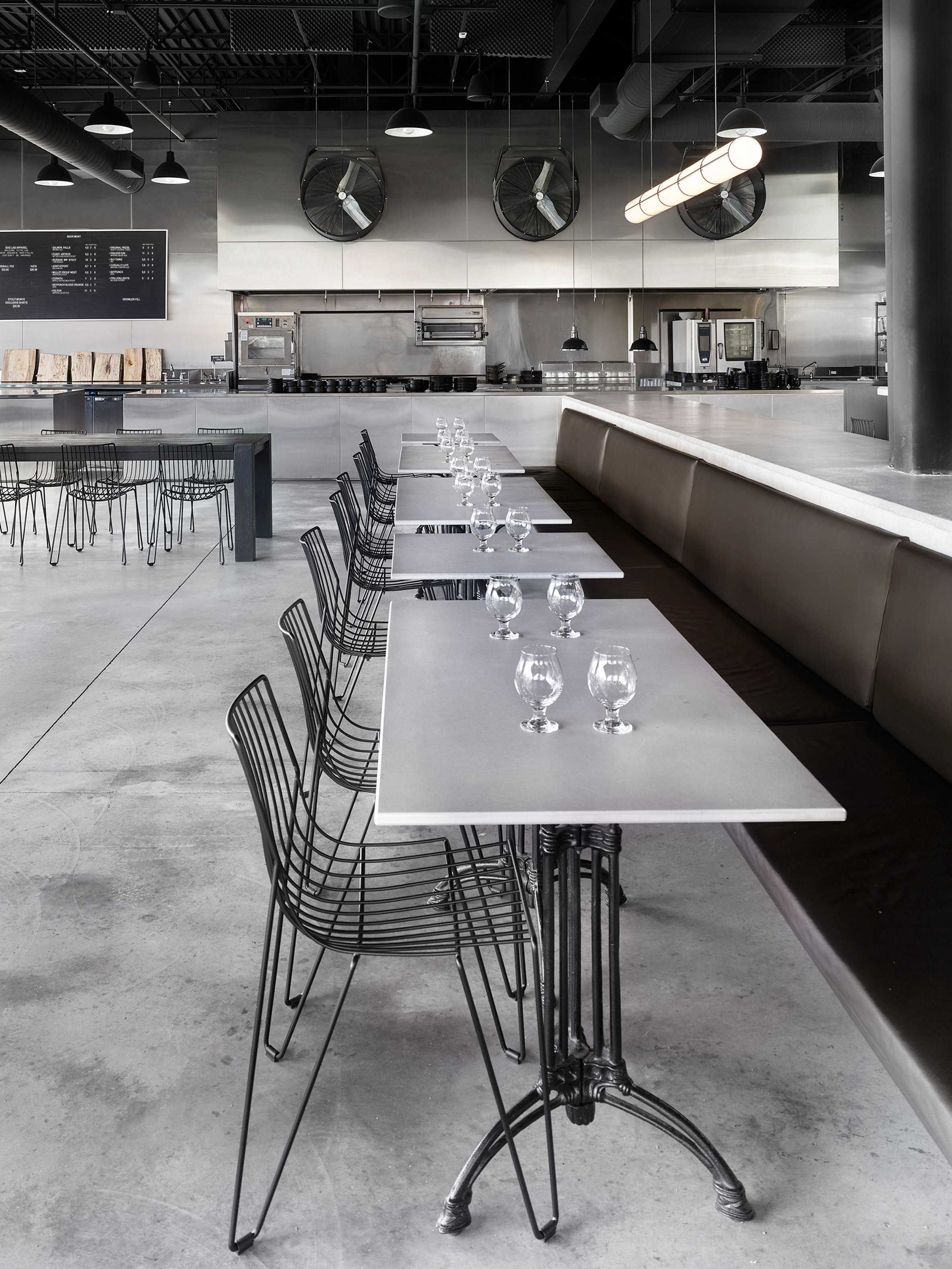 The layout includes a spacious dining room with ample natural light, and an open kitchen. Various high-top counters offer places to drink, with brewing facilities and restrooms located in the rear.

“My client wanted to create a restaurant and bar that would be a unique community gathering space where guests can interact with the bar and kitchen,” Lindvall said.

To separate the main dining area from a beer tasting space near the core of the property, Lindvall installed a 33-foot-long (10-metre) concrete counter, cast in-situ. One side incorporates a bench for dining, with storage on the other. 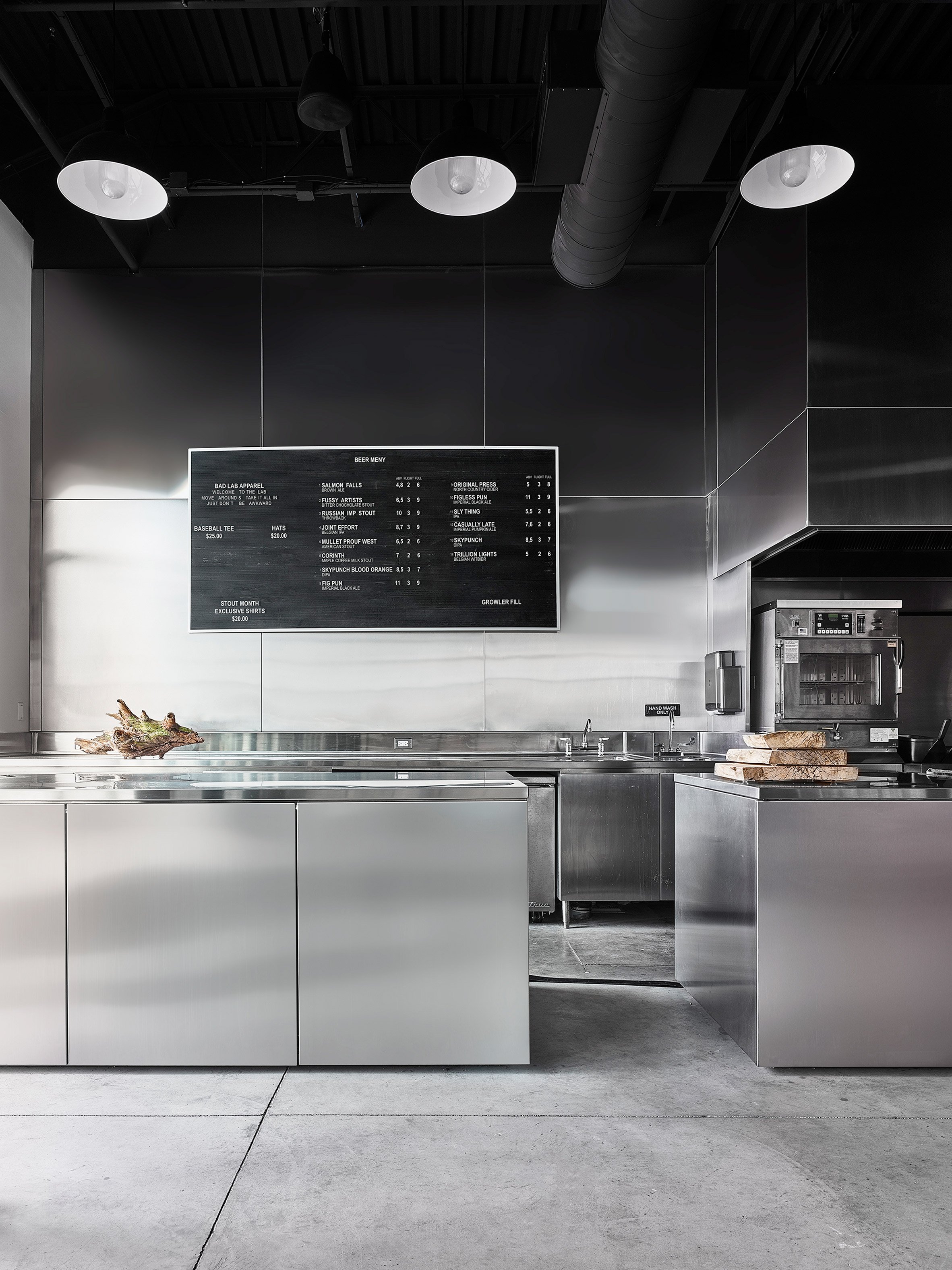 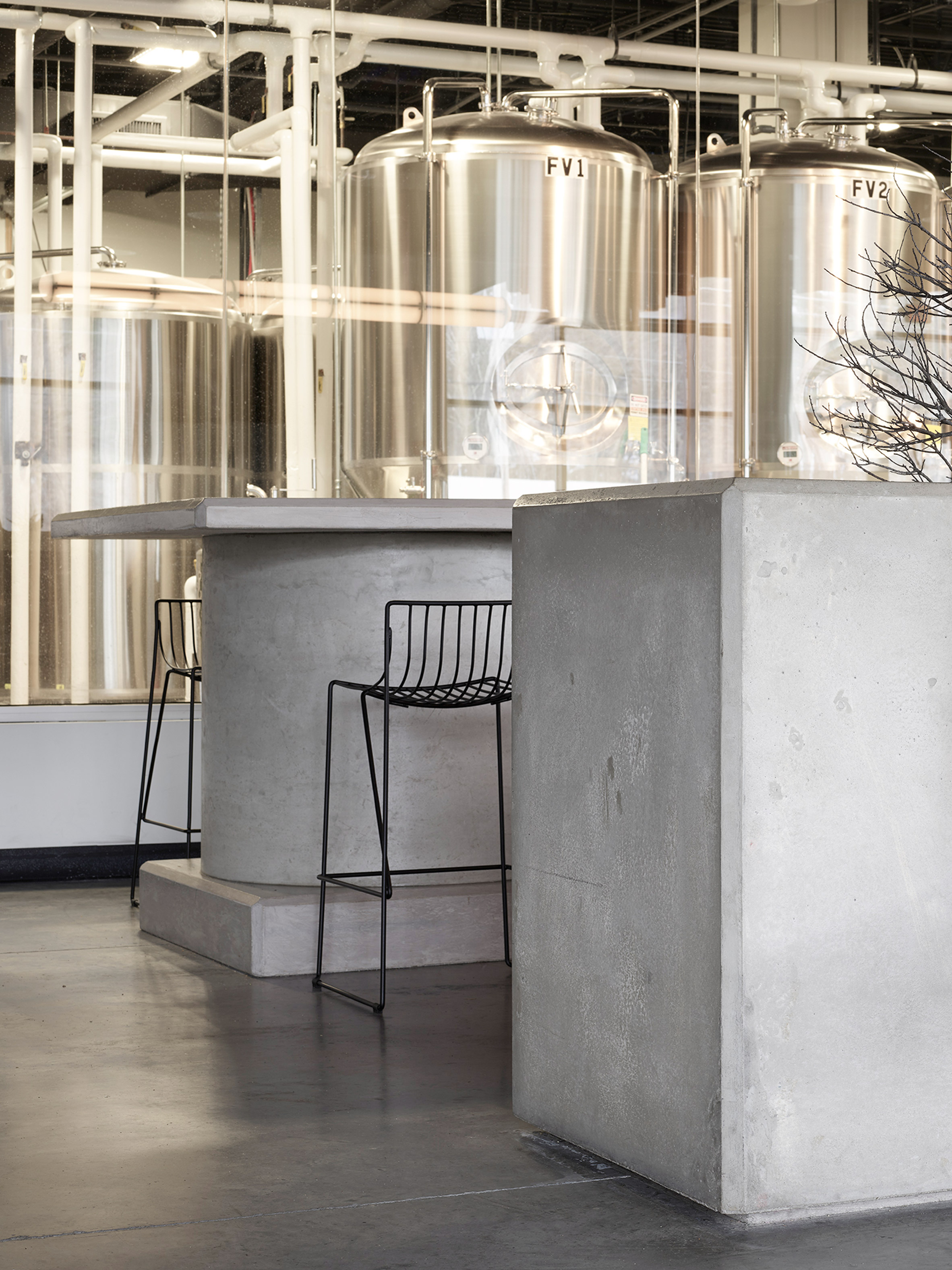 Bar stools and dining chairs are from Swedish company Massproductions, while a cylindrical pendant lamp was sourced from New York company Roll & Hill.

To add colour and warmth, Lindvall selected dark brown leather for a built-in bench, as well as natural decorative objects like tree branches. Sunlight also softens the brewery with its warm glow. 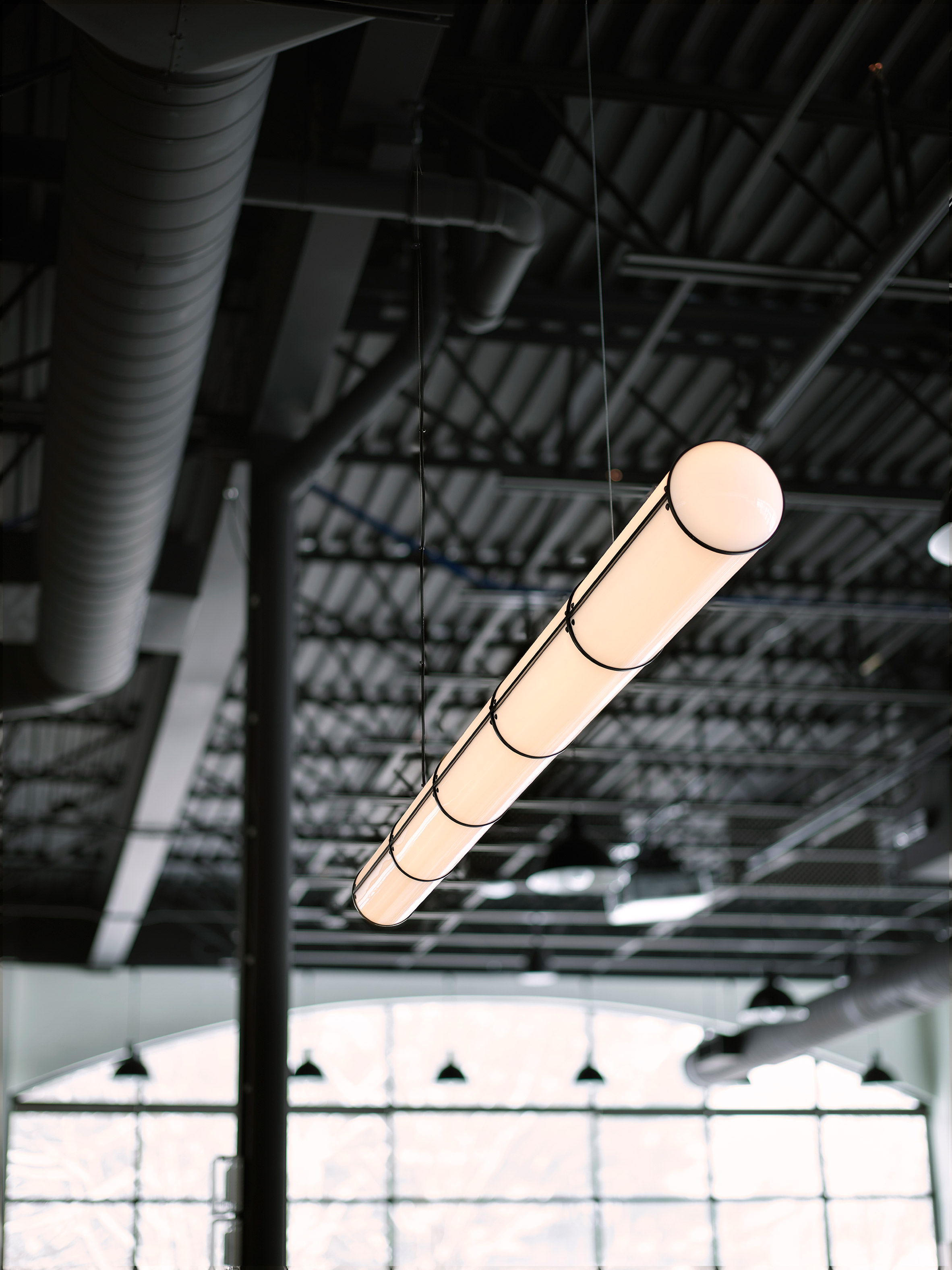 “When the sun comes through the windows and reflects on the kitchen it makes the steel warm and throughout the day it gives different effects depending on how light travels,” he said.

Lindvall has designed several other eateries, including a pale restaurant housed in a former sausage factory, and a greyscale bar with copper accents – both in Stockholm.

Photography is by Johan Annerfelt.