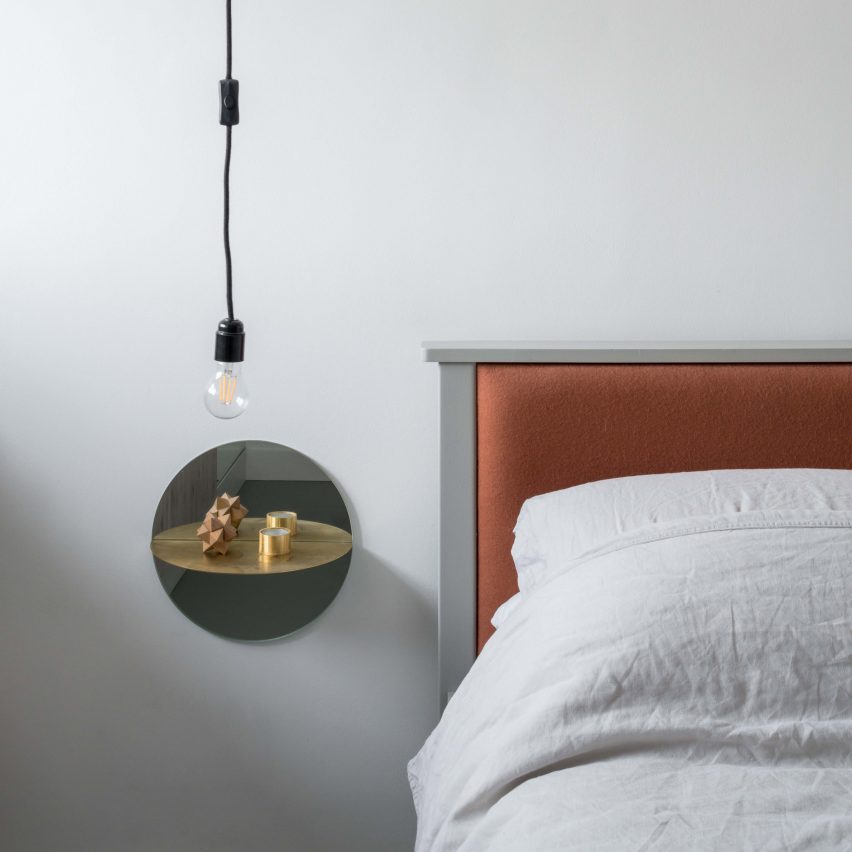 The maisonette is set inside Keeling House, a 16-storey residential block that was designed by English architect Denys Lasdun in 1957.

The founder of Studio Ben Allen and his wife decorated their home’s interior with an array of personal possessions so that it looks like a cabinet of curiosities.

Amongst these possessions are a number of optical artworks gifted by Danish-Icelandic artist Olafur Eliasson, whom Allen worked for over a 10-year period.

Several of the artworks are crafted from glass or mirror, and this prompted Allen to incorporate reflective elements in other spaces throughout the home.

The architect was also inspired by the round convex mirrors that appear in London’s Sir John Soane Museum, which playfully skew how visitors perceive the exhibition rooms.

A pair of oval mirrored side tables feature in the bedroom that’s located on the maisonette’s upper floor.

Another mirrored panel has been mounted on the wall to form the backing of a vanity table, which boasts a semi-circular brass ledge where jewellery, perfume bottles and other trinkets can be displayed.

The bedroom has otherwise been simply finished with white-painted walls, larch wardrobes and exposed-wired lighting fixtures.

In the bathroom, half-moon-shaped mirrors have been affixed to the doors of a storage cabinet, which sits directly above a bespoke green-concrete sink.

The image of the sink is repeated in an arched mirror on an adjacent wall.

Surfaces are clad with jade-green tiles, while taps, spouts and the tubular shower head are made from brass. Perforated shutters have also been installed in front of the windows to allow just a little amount of natural light to seep through from the outdoors.

“We wanted the bathroom to be purposefully darker to contrast with the brightness of the rest of the flat and to imbue it with a sense of refuge,” Allen explained.

At this level of the house, there’s additionally a study that has a green cushioned daybed and a larch work table.

Most of Eliasson’s art pieces can be seen in the maisonette’s stairwell, displayed alongside arched mirror shelves that hold candles or tiny architectural models.

Steps lead down to the lower floor, where Allen has exclusively applied a selection of “robust” materials which are meant to age well over time.

“[Materials] have also been chosen to give a sense of tactile warmth both when the flat is flooded with daylight, as well as on overcast days and at night,” added Allen.

The kitchen, for example, has oak cupboards and a green-concrete countertop. A grey-tile splashback is dotted with brass pegs where crockery or cooking utensils can be hung.

Just opposite there’s a book-lined sitting room complete with a black leather sofa and a cosy oak seating nook that doubles-up as a storage box.

To loosely divide these two spaces, Allen and his team have erected a trellis-style shelving unit that stretches from floor to ceiling. A small work desk can be pulled out from the blue fibreboard drawers that sit at the unit’s base.

The presence of the unit acts as a small homage to architect Lasdun, who had originally designed the flats inside Keeling House with galley kitchens that were separate from the sitting rooms.

This was changed in the 1990s when, at risk of demolition, the building was completely revamped to feature minimal, open-plan living areas.

Expansive panels of glazing look through to the maisonette’s balcony, where Allen has added a planter filled with wild grass and a Rhus Typhina tree. Beyond lies views of Hampstead Heath park and the city of London.

Allen established his self-titled studio in 2014 and has since gone on to complete a number of projects. Just last year, the studio created an artichoke-shaped garden room for a home in southwest London, and renovated a Barbican flat to include colourful fold-out furniture.

Photography is by French + Tye.

The post Ben Allen completes overhaul of his own home in east London appeared first on Dezeen.