Red corrugated roofing fronts the curving bars inside the Falafel Yoni eatery in Montreal, which architect David Dworkind based on the hues of a popular shoe. The shop is located in the city’s Mile End neighbourhood and only serves falafel – deep fried balls of chickpeas, commonly served in pita bread and eaten by hand. Customers can enjoy the Middle Eastern delicacy at a pair of curved bars, which features a grey top made of laser-cut steel placed above the red asphalt material.

The local architect chose the materials to meet with the colour concept for Falafel Yoni, which he based on the pairing of grey and red tones in a trainer by sports brand New Balance. 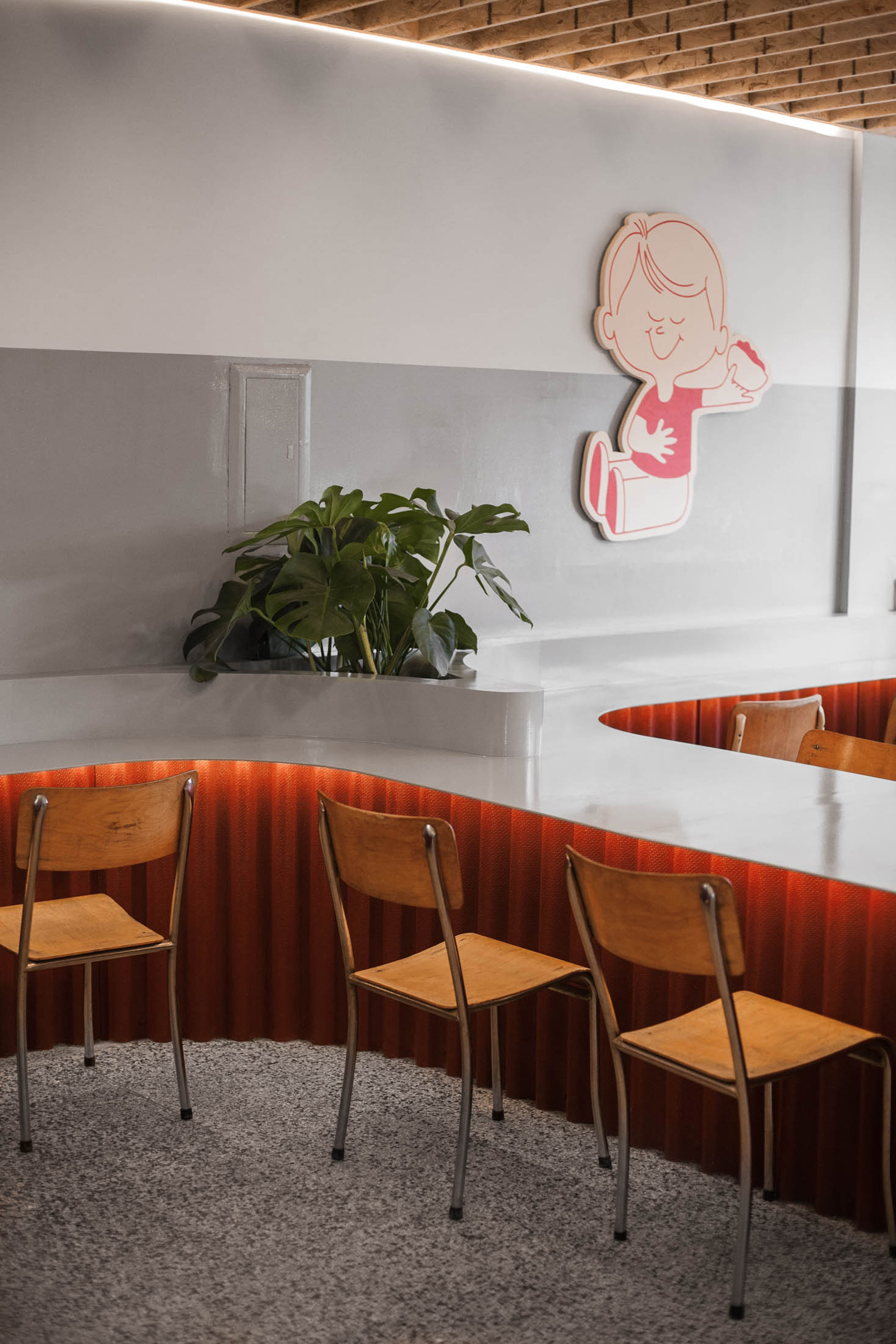 “The base of the curved bar is covered in a dark red corrugated asphalt roofing, which fit perfectly into the colour palette, inspired by a classic New Balance sneaker,” said a statement from Dworkind. 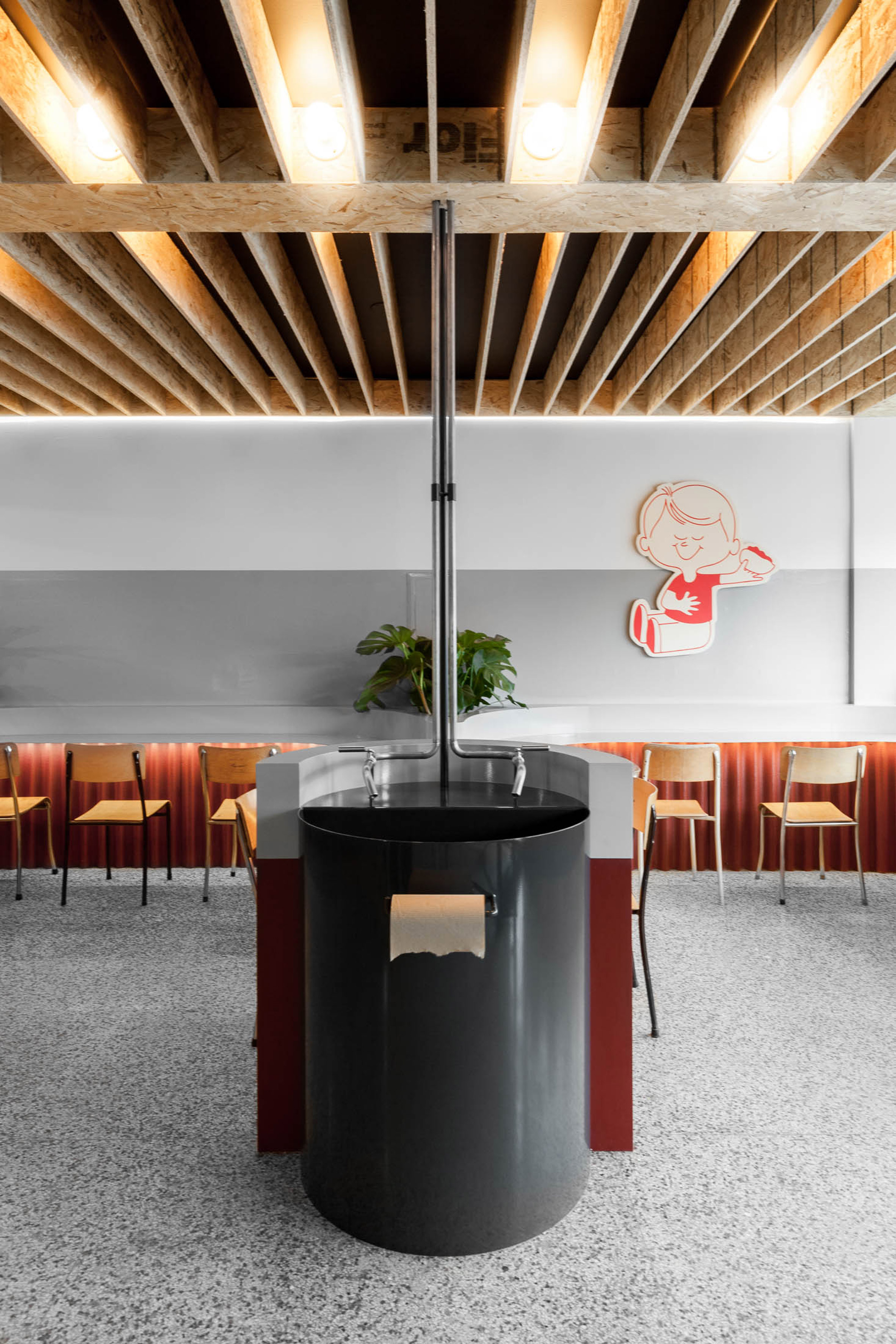 Dworkind’s “diner feel” bar is laid out to respond to the city’s zoning regulations. These stipulate that the eatery can only serve 12 people, despite the 950-square-foot (88-square-metre) shop being fairly spacious. Seats for six are placed in either side of the bar, which also fronts the servery.

The two sections form a tip in middle of the restaurant, where there is a sink for customers to wash their hands after eating.

A pair of stainless steel taps extend from the ceiling above into the dark cylindrical washbasin, which the architect cut from the same piece of steel as the bar top. Dworkind, who also used the steel for the bathroom sink and soap dispenser, has employed a cost-saving approach to the materials throughout the restaurant’s design. The 12 chairs were salvaged from school classrooms to “give a vintage touch to the design”.

Other rough details include the unfinished oriented strand board (OSB) panels that cover the uneven ceiling and form holders for overhead lighting. Existing terrazzo flooring runs throughout the falafel shop and into the customer’s bathroom, where the colour palette changes to green-painted walls and white tiling.

The bathroom is placed to the rear of the restaurant, where the kitchen and offices are also located. 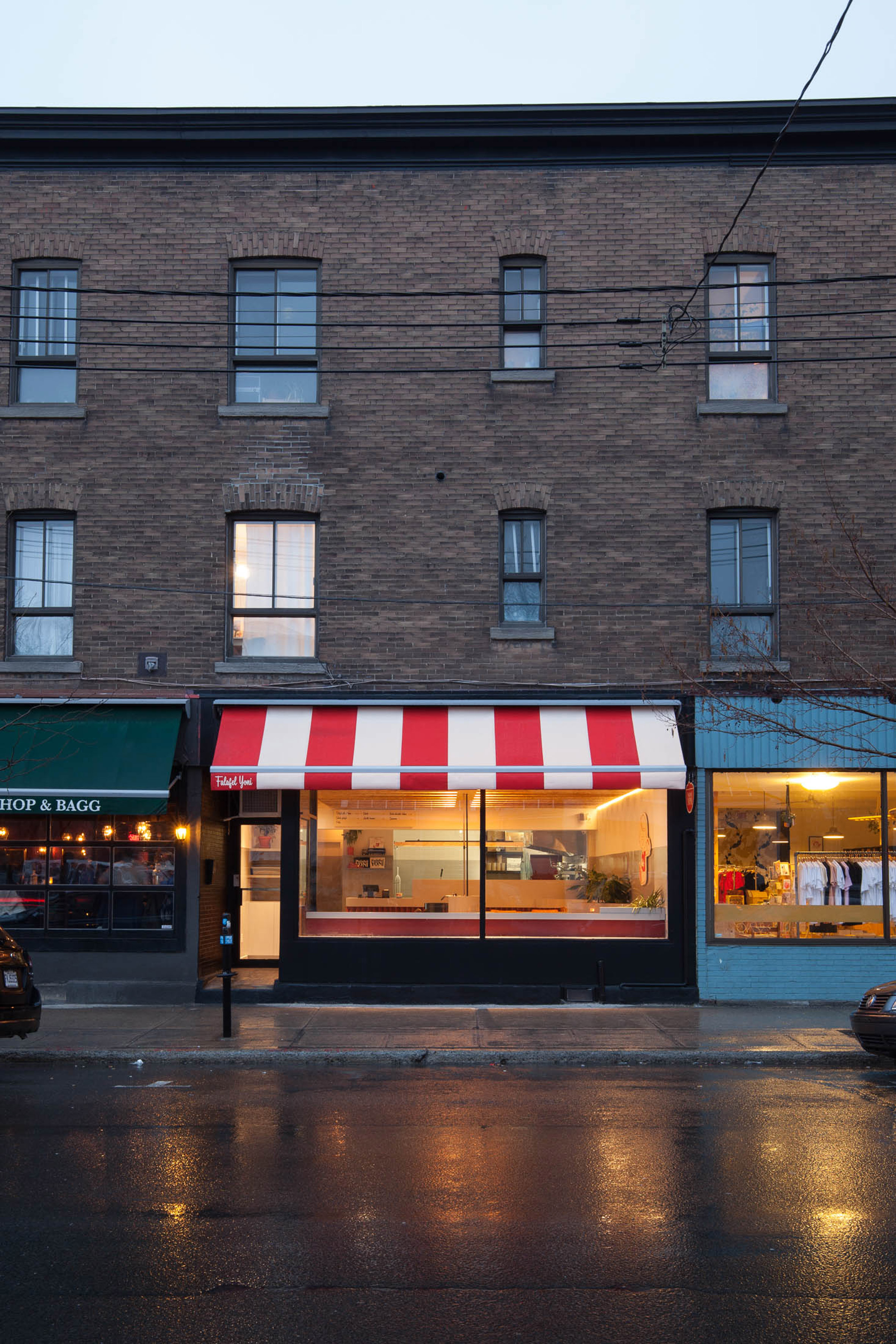 Dworkind has previously designed a Lebanese snack bar and bakery in the city.

He has also worked as a designer on a number of projects with architecture studio Naturehumaine, including a residence in Quebec set atop a bulky concrete wedge and the renovation of a mid-century Montreal house with plant-covered wall.

Photography is by David Dworkind.