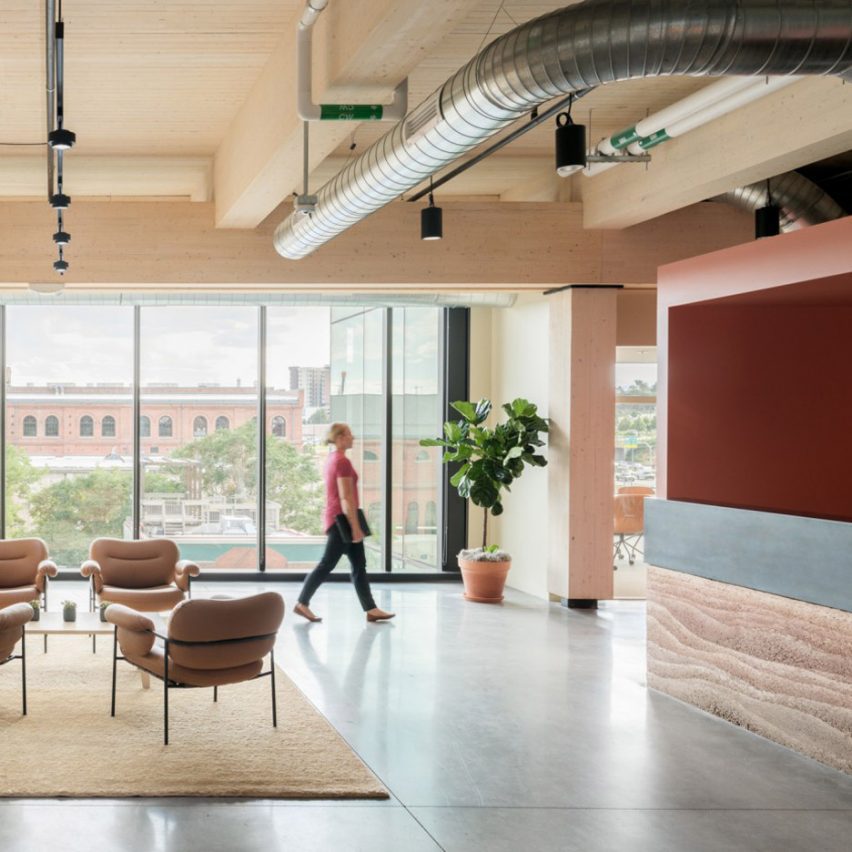 A natural material and colour palette helped the in-house design team at Education First to approximate the feeling of being outdoors inside the company’s office in Colorado.

Education First (EF) specialises in language-learning tours across the world, and its Denver outpost occupies the fourth and fifth floor of the city’s first commercial cross-laminated timber (CLT) building, Platte 15.

“All of our projects strive to be contextual,” the EF team explained. “For this project, we used figurative and literal references to nature as a way to connect to Denver’s outdoors as well as its ‘outdoorsy’ culture.”

Allusions to nature can be seen immediately upon entering the office’s reception, which is anchored by a huge boxy desk.

The bottom half of the desk is made from strata of rammed earth, while an overarching canopy is finished in a brownish-red colour that is designed to evoke the sandstone outcrops of Red Rocks, a mountain park located 10 miles west of Denver.

A couple of relaxed seating areas with tubular armchairs were incorporated into the space, as a nod to the log cabins that are found in more rural parts of Colorado.

Much like the reception, private meeting rooms, kitchens, telephone booths and a company auditorium are housed inside boxy volumes that sit apart from the building’s shell.

“Rather than try to hide the structure as we might have in a less interesting building, swallowing up columns with rooms and wall partitions, we sought to celebrate it,” said the design team.

Each of the “boxes” has been painted a colour that loosely references different elements of nature, with one finished in sandy beige and another in sky blue.

All have been fitted with gauzy natural-fibre curtains to temper acoustics save for the auditorium, which has concertinaed glass doors that can be pushed back in case the space needs to be used for larger company gatherings.

Staff can have more casual catch-ups in the break-out areas that appear around the perimeter of the office, dressed with comfy sofas, leafy potted plants and rattan pendants lamps.

A handful of outdoor furniture pieces such as chain-link swing seats are integrated into the interior to help reinforce the feeling of being outside.

The rest of the office is filled with banks of work desks, loosely organised around custom timber storage units that are inbuilt with whiteboards for impromptu brainstorming sessions.

The two levels of the office are linked together via a statement staircase made from the same CLT that was used in the construction of the building.

Designed to “feel like passing through a forest of trees”, its balustrade comprises a series of vertical timber beams that rise from the fourth floor all the way up to the ceiling on the fifth floor.

The company’s Denver office is one of six projects shortlisted in the large workspace interior category of this year’s Dezeen Awards.

Others in the running include the headquarters of lifestyle and wellness brand Goop, which Rapt Studio decked out with soft colours and rounded furnishings to foster a calming ambience.

Photography is by David Lauer.