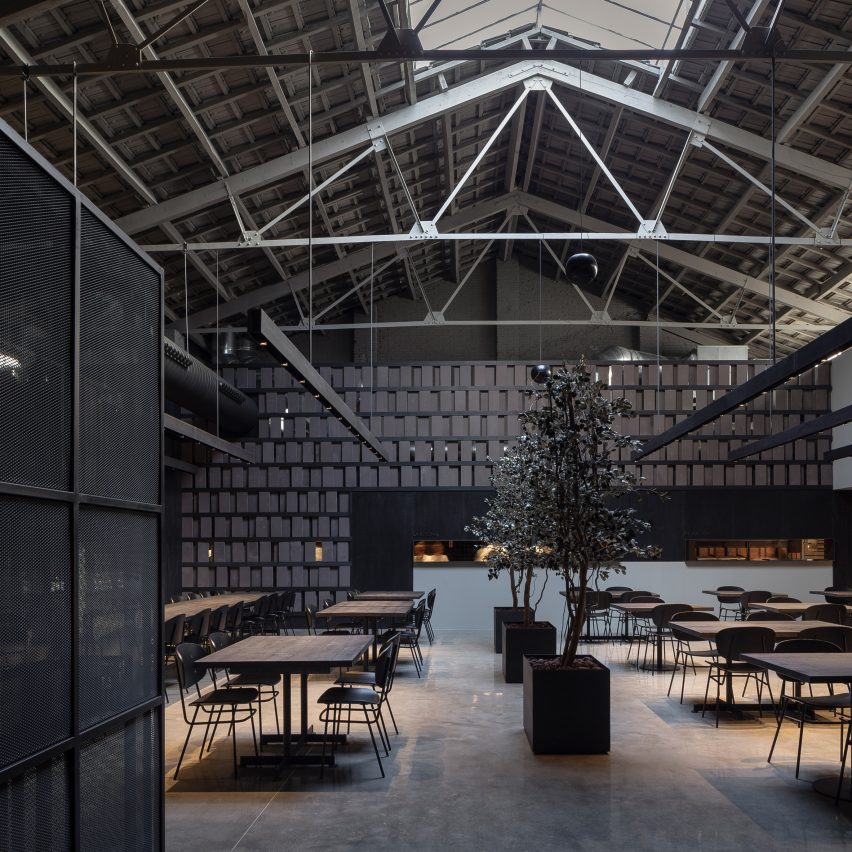 Coal-coloured surfaces and blackened furnishings provide the dark interiors of this market-style restaurant in Valencia, designed by Francesc Rifé Studio. 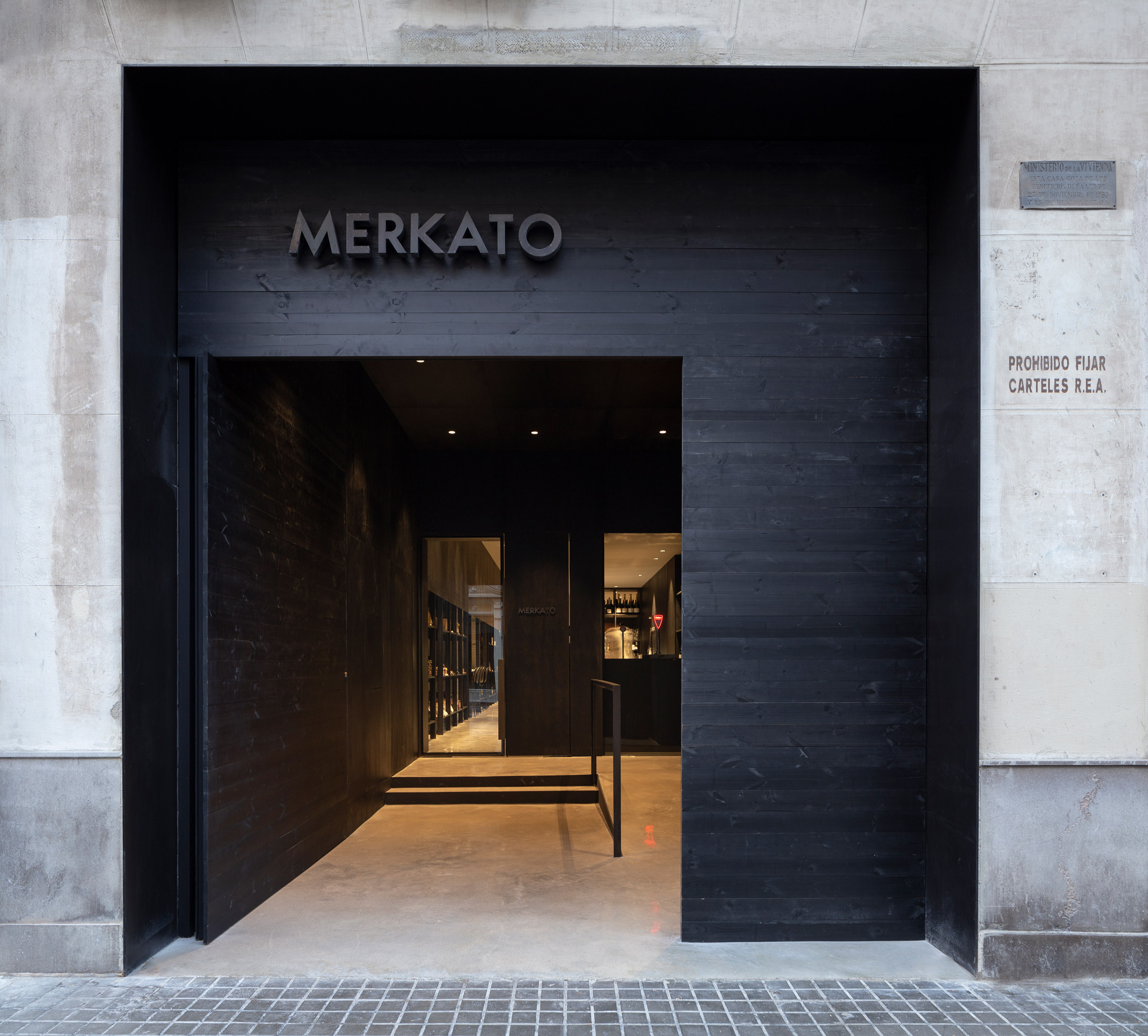 Located in Valencia’s buzzing Eixample district, the lofty space is described as a gastronomic market. It plays host to a restaurant, bakery and deli, all of which serve Spanish delicacies. 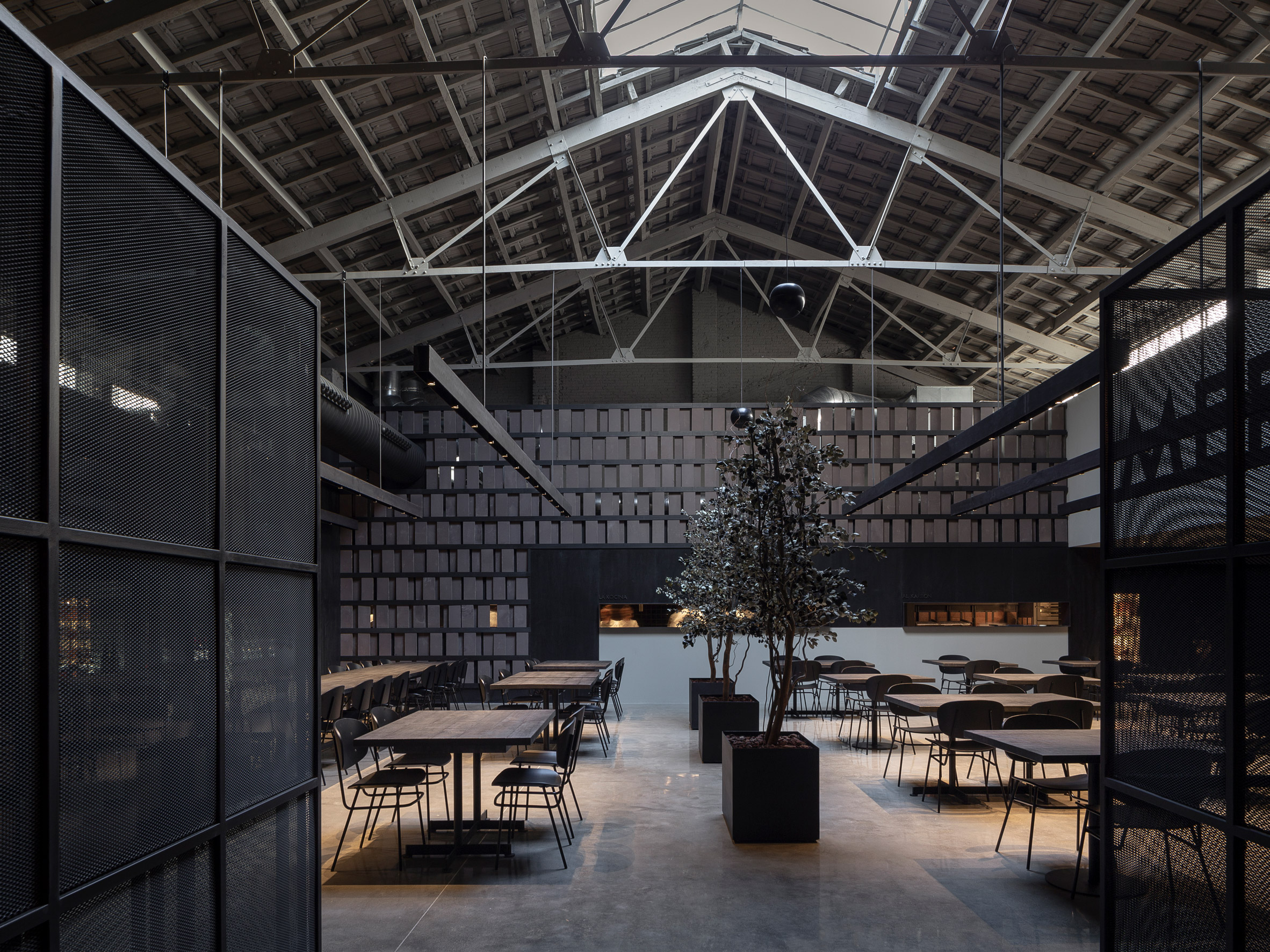 The building is accessed via a huge door fronted by panels of blackened pinewood, hinting at the hue of the spaces that follow inside.

After walking down a long corridor lined with purchasable food goods, visitors reach the main dining space, which is meant to evoke the atmosphere of an outdoor courtyard. 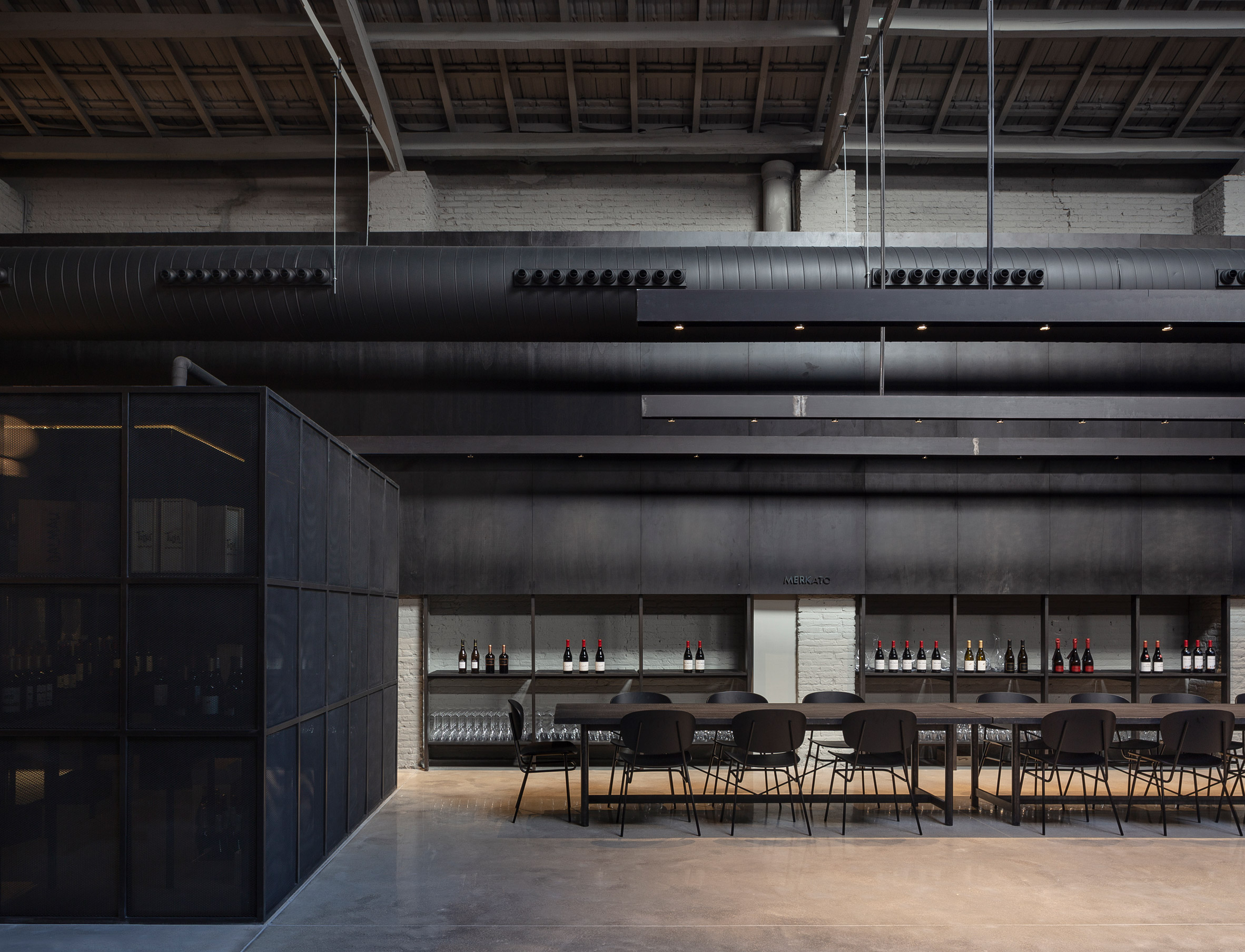 Box planters containing leafy green trees sit between the black timber tables, while a skylight punctures the peak of the roof to bathe the room in natural light.

A long partition wall composed of charcoal-coloured terracotta tiles runs along the rear of the room, obscuring the kitchen. Some tiles have been left out, allowing diners to catch glimpses of the chefs preparing dishes. 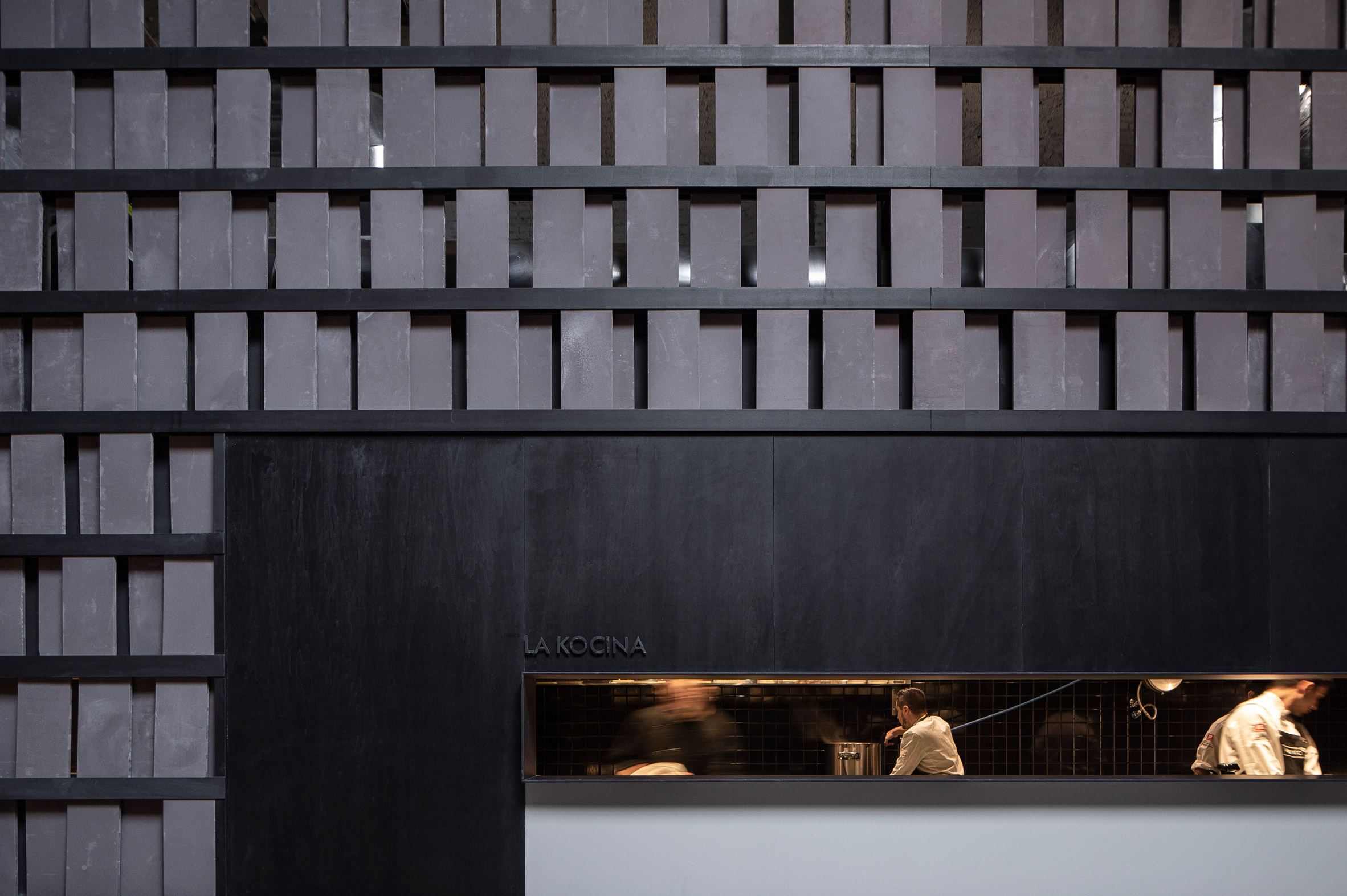 On the other side of the space is a trio of boxy volumes made from sheets of black metal mesh, designed so that they could be installed without the need to make any extensive changes to the building’s structural shell.

One of the volumes accommodates a staircase that leads to the restaurant’s mezzanine level, while another contains basins where customers can wash their hands. The third is fitted with shelving units used to store bottles of wine.

“Efforts have been made to maintain the industrial nature of the space, without falling into themes or traditions – we used simplicity as a principle,” the studio explained.

“Our studio has created a renewed market concept based on honesty, both in materials and products.” 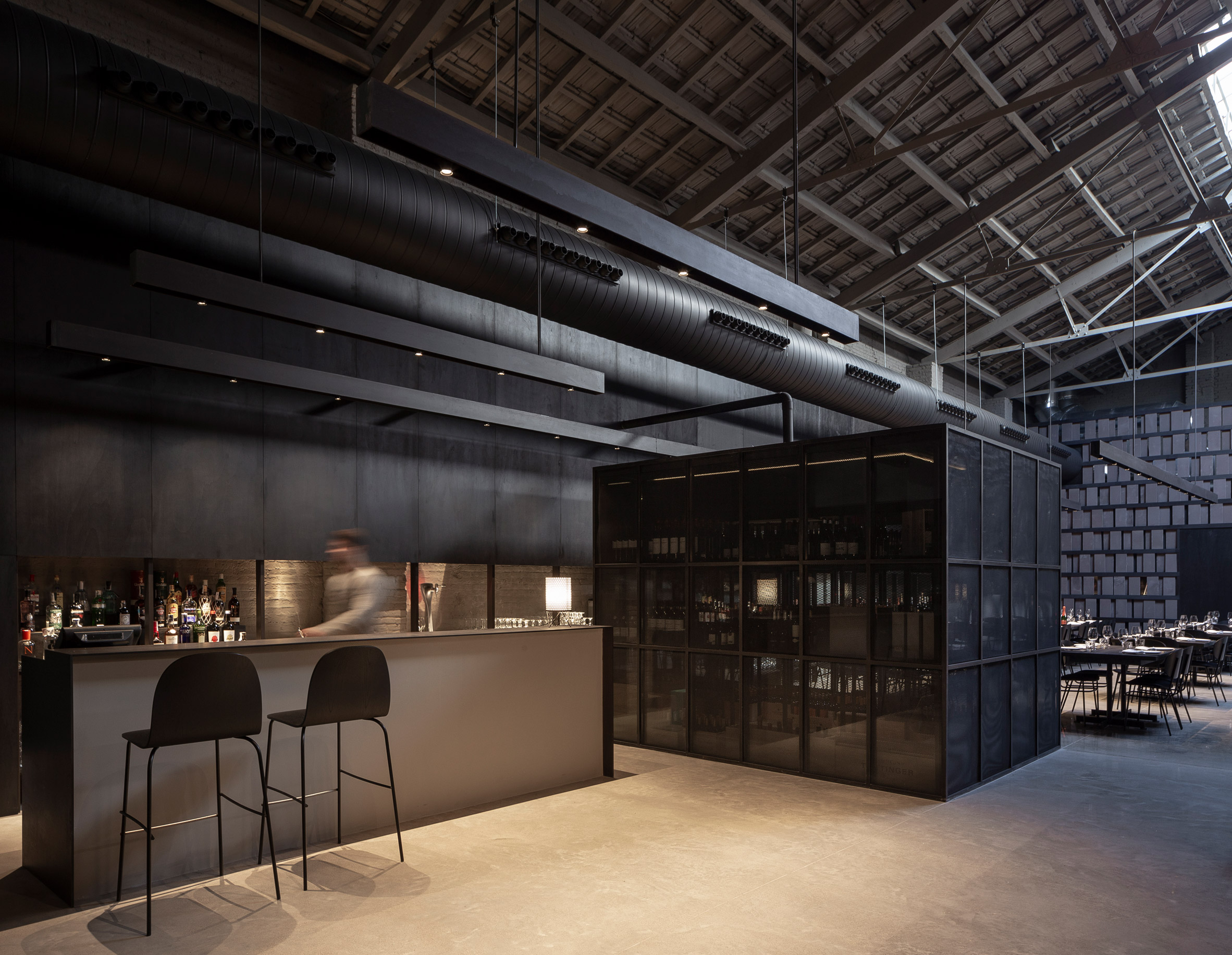 Behind these volumes sits the bakery area, which the studio wanted to have a “warmer climate”.

To achieve this, they decked it out with an oatmeal-coloured rug, oversized pendant lamps, and chairs upholstered in dark green fabric. 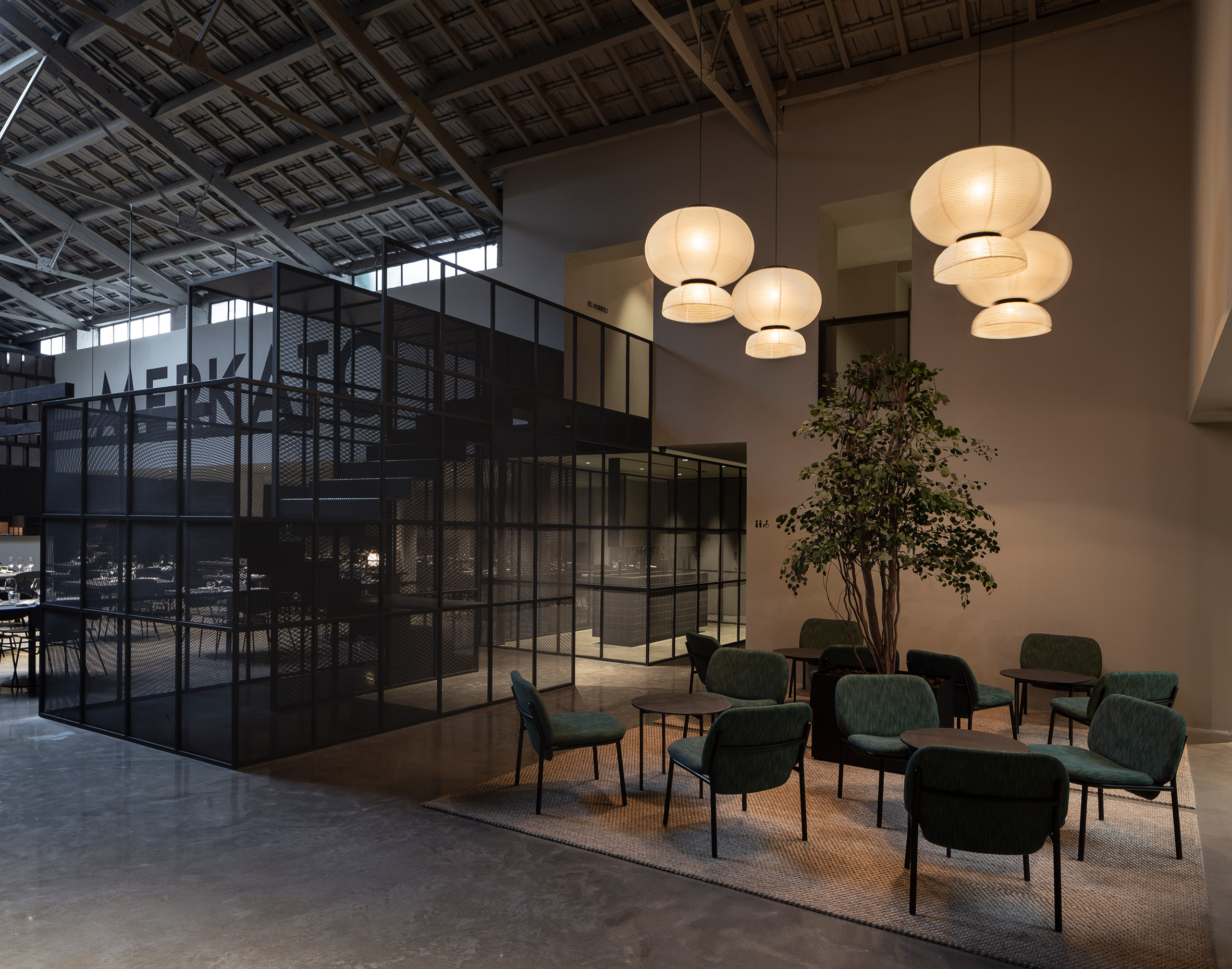 Merkato has a number of other interesting features for foodies including a fishmonger and a dark room where diners can “clandestinely” taste meals being trialled for the menu, which lies behind a hidden bookshelf.

This isn’t the first time that Francesc Rifé Studio has opted for a dark-hued palette – last year it fashioned greyscale interiors for the Avianca lounges in Bogotá’s airport, which feature slate-coloured soft furnishings, carpets and walls.

Photography and video are by David Zarzoso and Fernando Moreno.