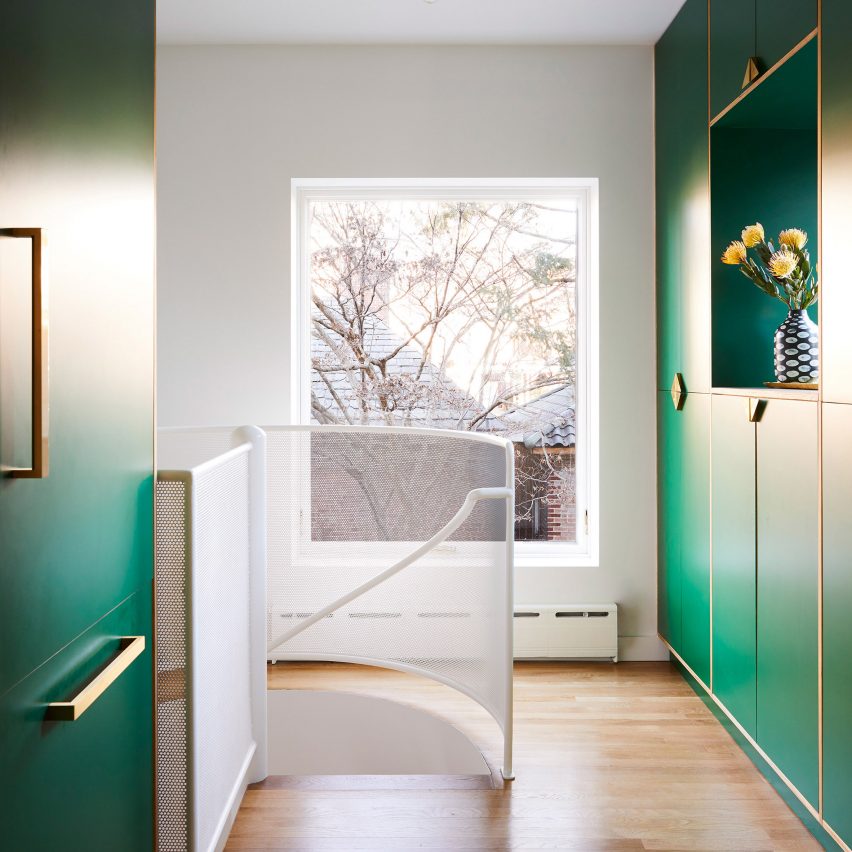 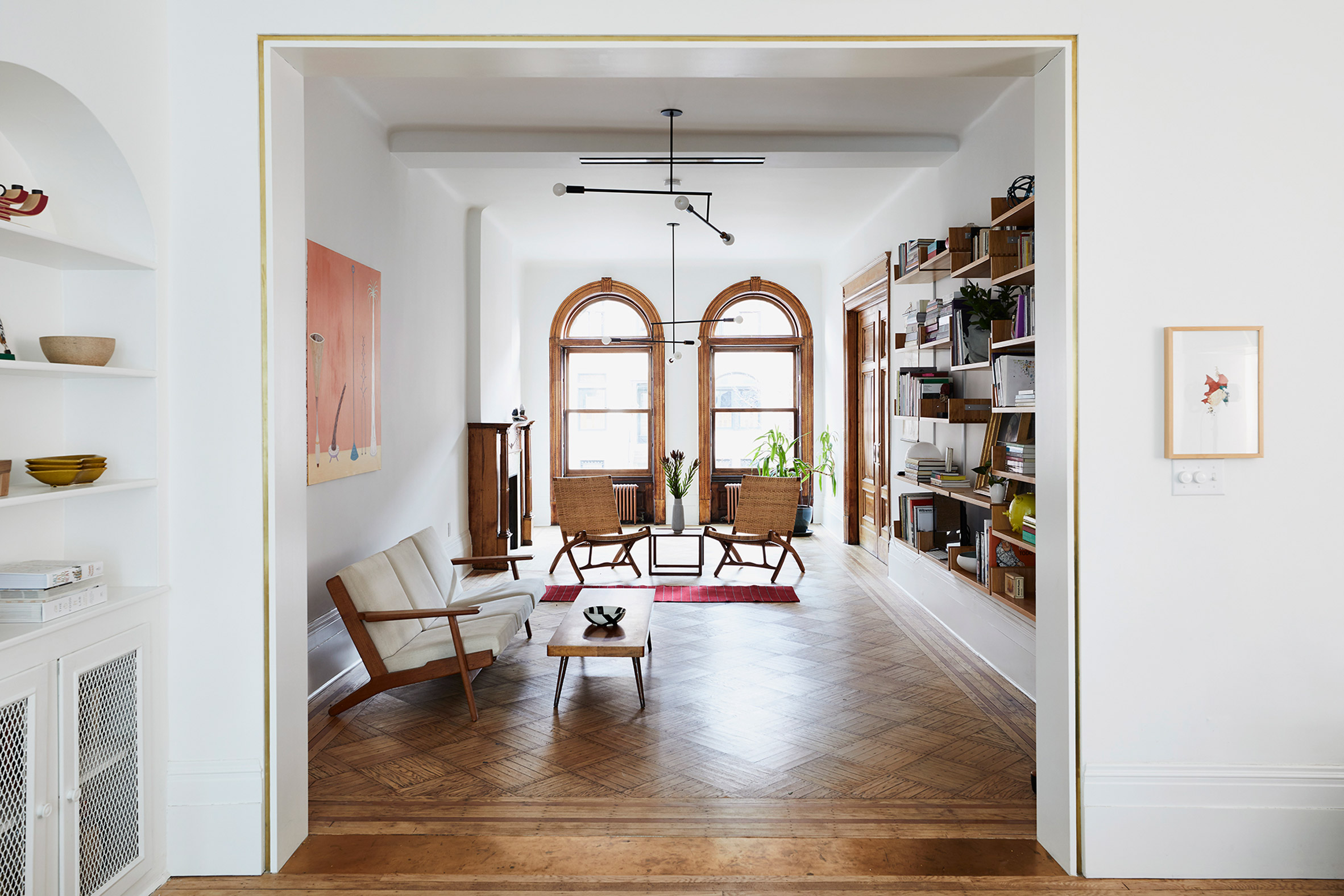 GRT Architects’ overhauled four-storey brick home is located in Prospect Lefferts Garden neighbourhood – an area near Brooklyn’s Prospect Park that is characterised by quiet streets and many historic residences.

Called Prospect Lefferts Garden Townhouse, the property was originally completed in 1910 by architect William M Miller, and features an eclectic mix of romanesque and neo-renaissance elements. 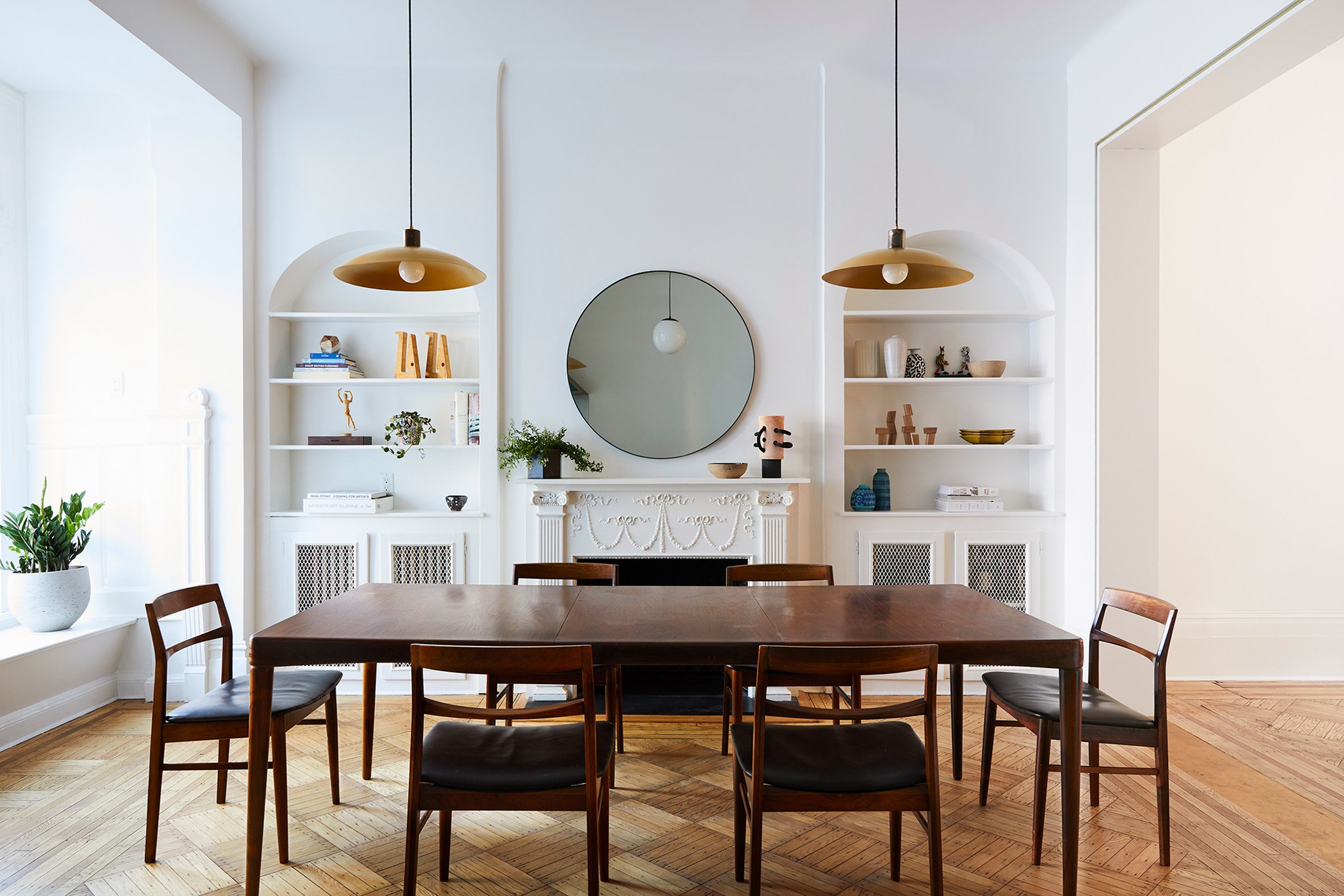 Modifications and upgrades were added over the years following its completion to suit the needs of a variety of different owners.

“At some point, a two-storey addition was built in the rear and in 1940 the ground floor was turned into a doctor’s office,” said GRT Architects in a project description. 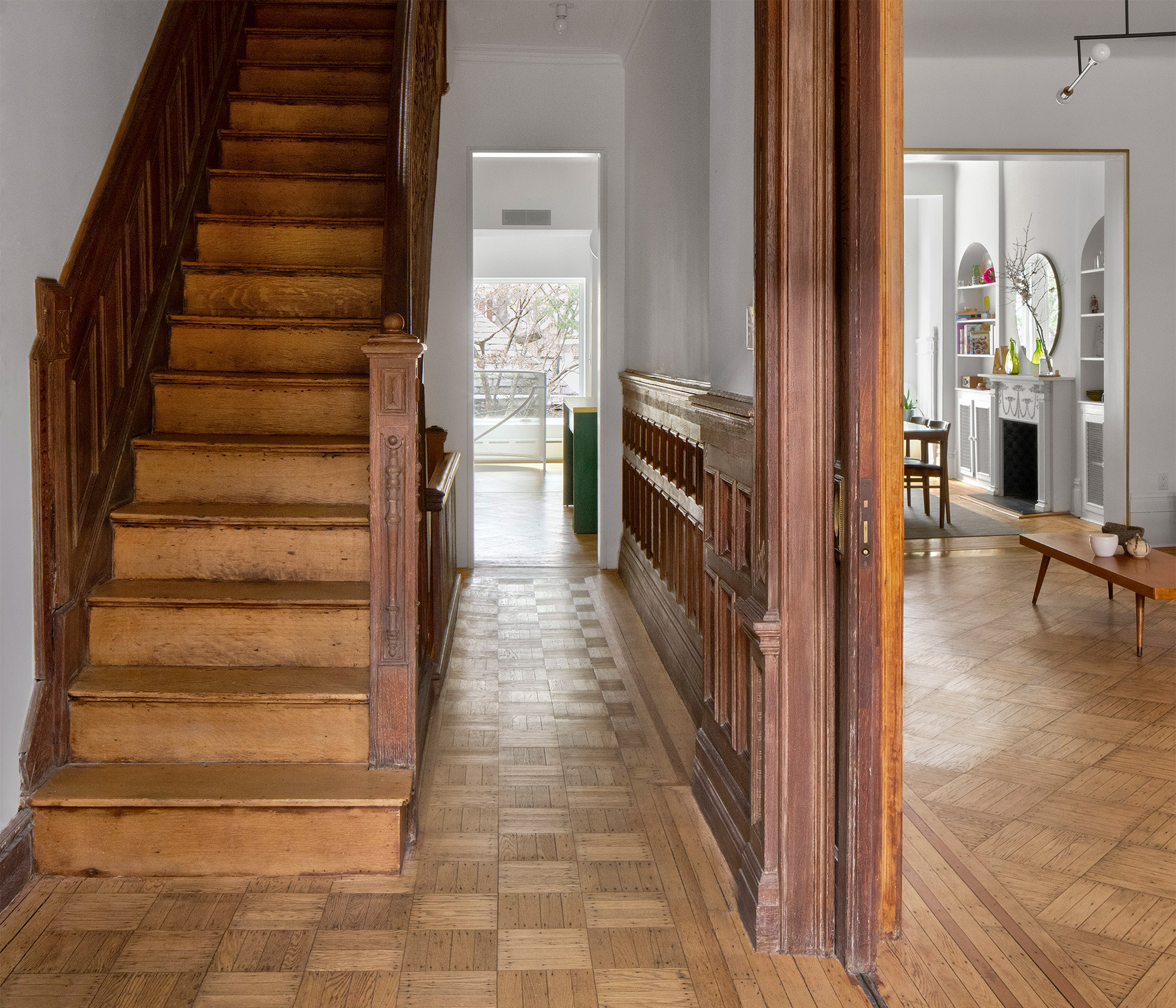 GRT Architects designed the renovation of the 4,100-square-foot (381-square-metre) home to pay homage to these historical details, while also providing continuity with newer aspects. 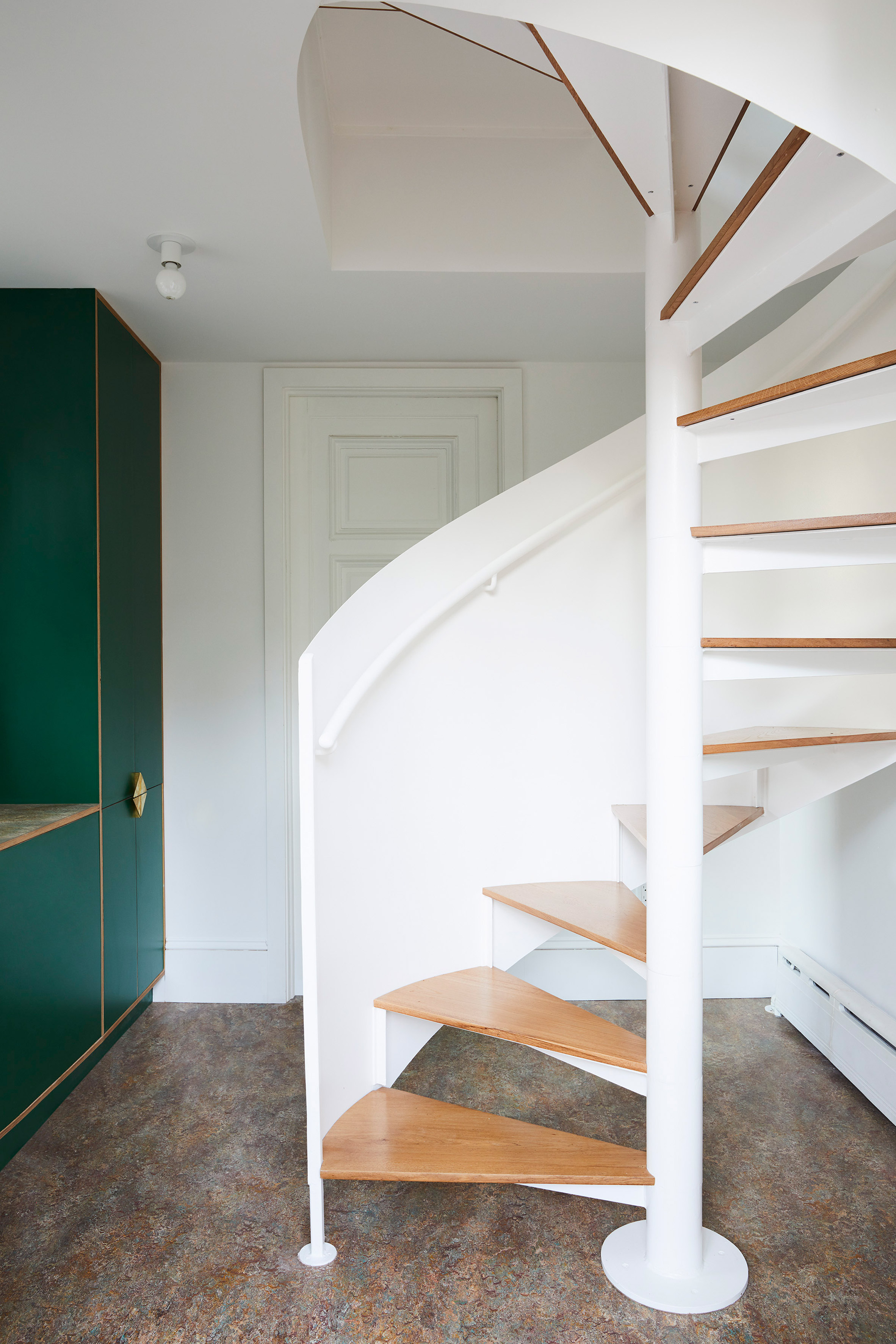 “This highly choreographed play between new and old, contemporary and historical, led to a result that celebrates both and satisfies the demands of our modern clients,” said the studio.

“When working on historical buildings, we begin by establishing an attitude of new to old.” 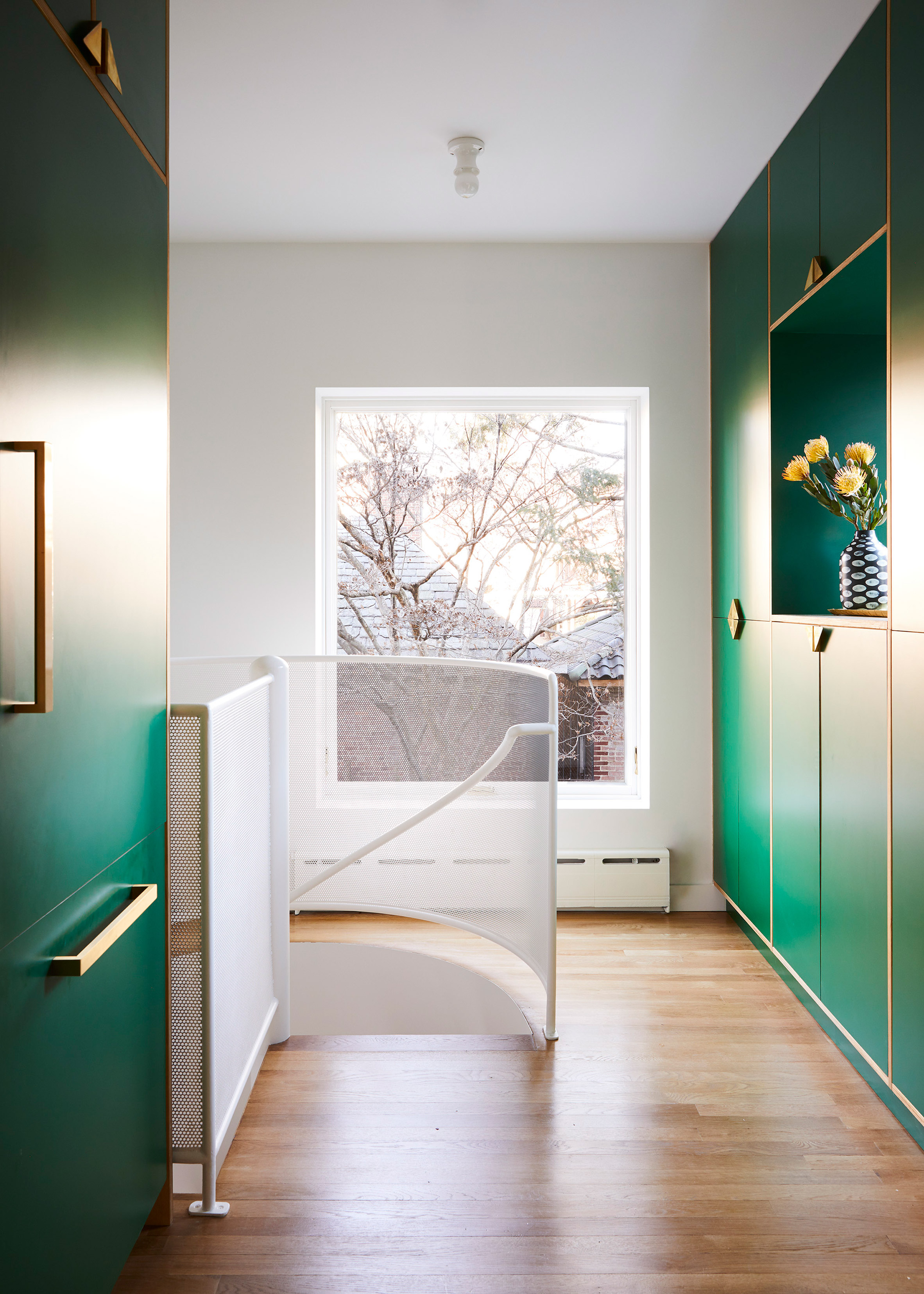 Many of the home’s wooden details were preserved, including original parquet wood floors, numerous fireplaces, a traditional wooden staircase, and elaborate wall panels and trim.

Sky-blue enamelled bathtubs, which would otherwise have been outdated, were also given new life. 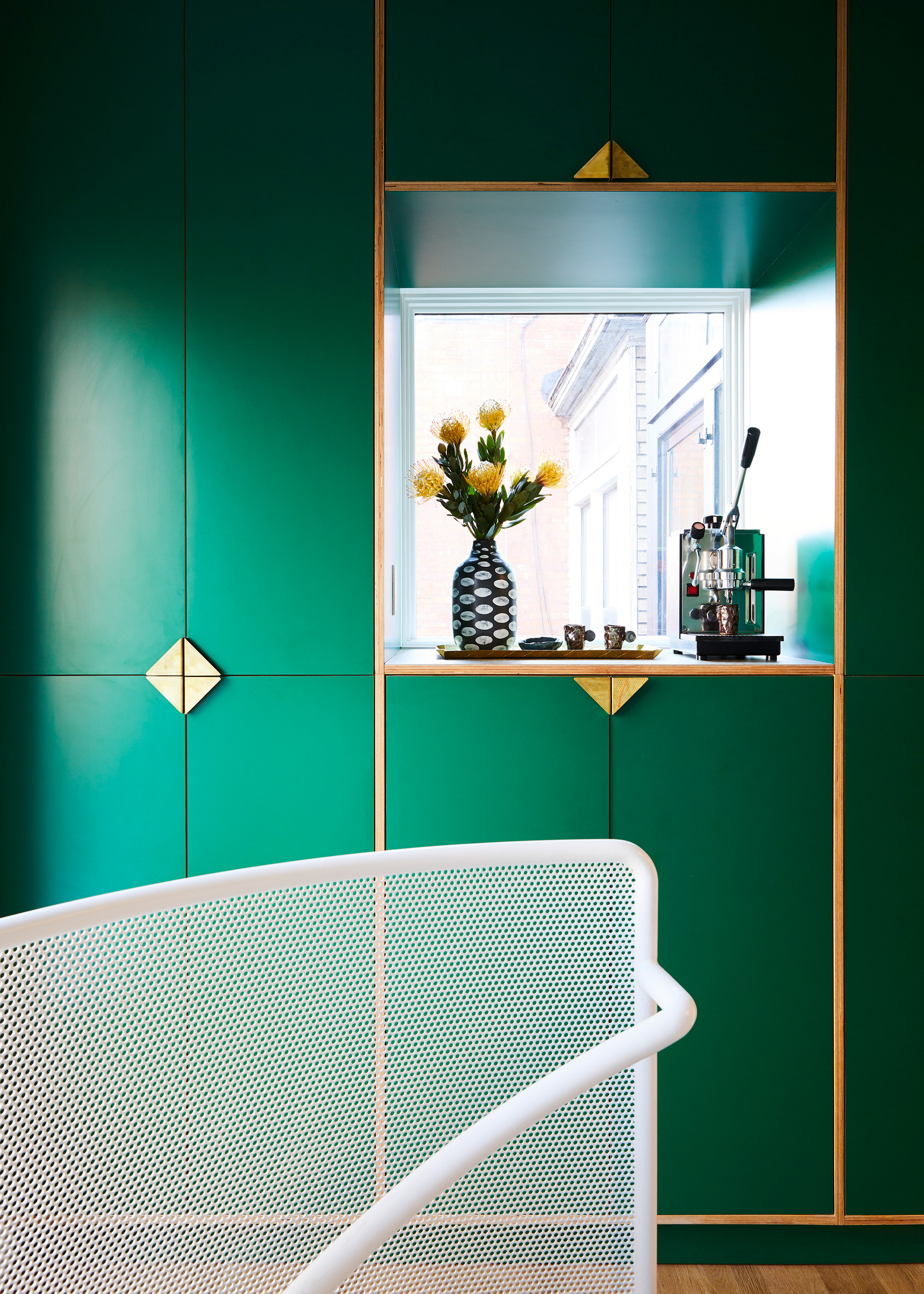 Complementing these older details are white-painted walls that act as a blank backdrop for a number of new green accents.

Green linoleum cabinetry in the kitchen is decorated with golden details, including a shiny island countertop made by Forbo Marmoleum. Triangular brass pulls were custom made by GRT Architects, and are used throughout the home. 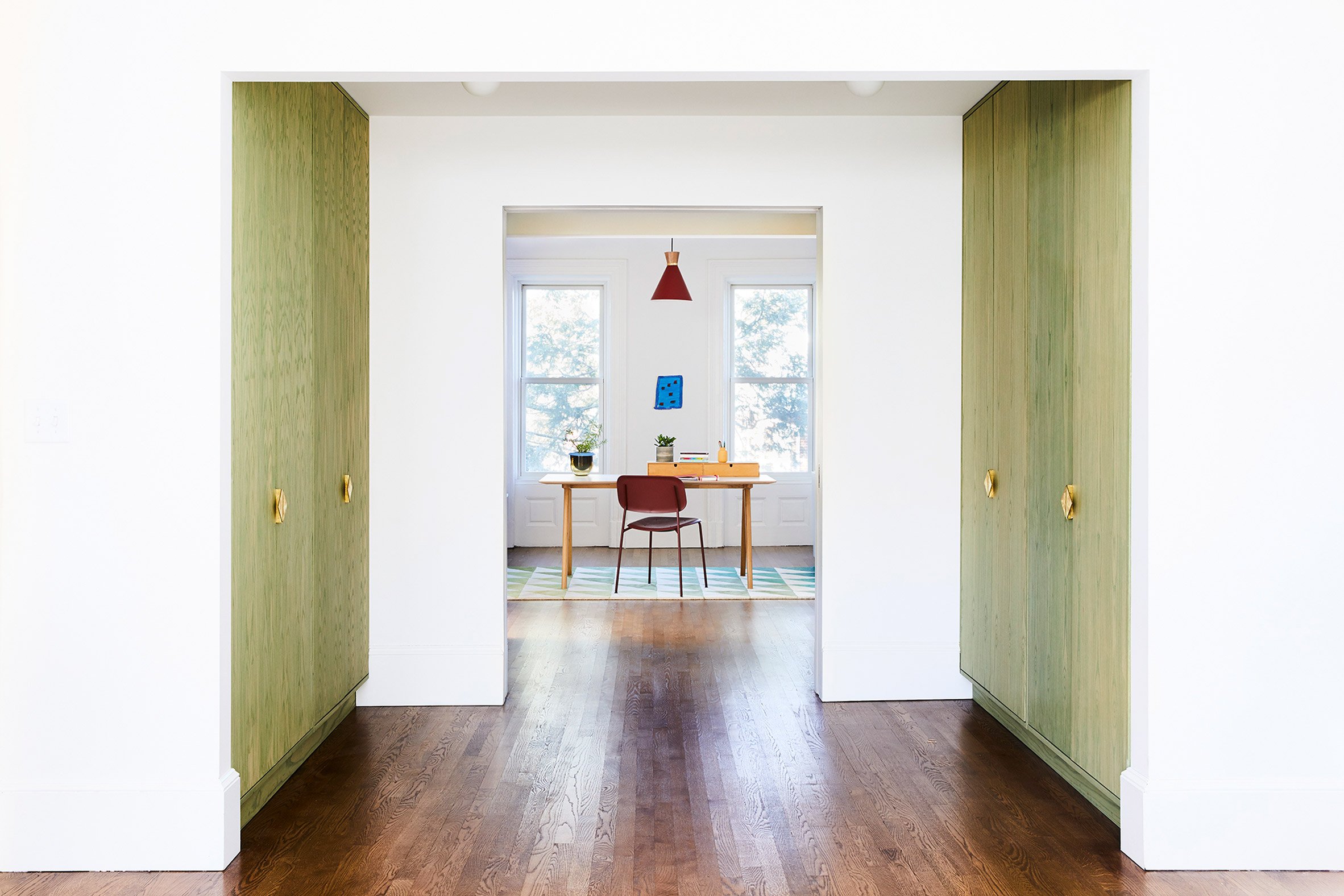 “We deliberately created a kitchen that felt contemporary and stood in contrast to its historical frame,” said GRT Architects.

Other golden details include the untreated brass frame that wraps the new enlarged portal between the living and dining room, which occupies the residence’s second level. In the eating area, the studio coated trim in matte white. 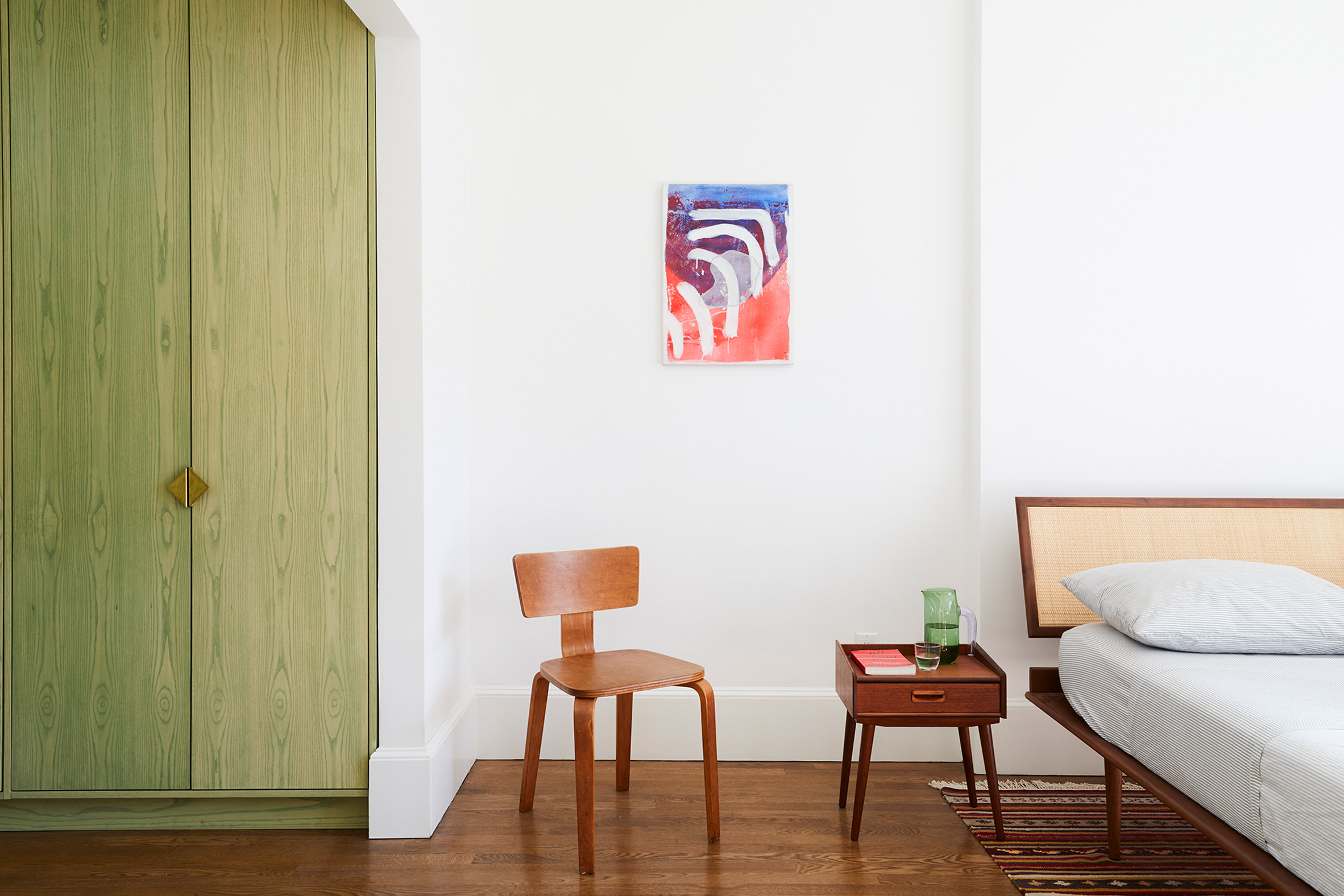 “Rather than try to match the existing historical mouldings, we opted for minimal trim with brass inlays and a broad brass threshold marking the new opening,” said the studio.

An opening upstairs was similarly enlarged to provide views across the home. Another one of these sight lines is opened near to the kitchen, allowing natural light to pour in from a large window. 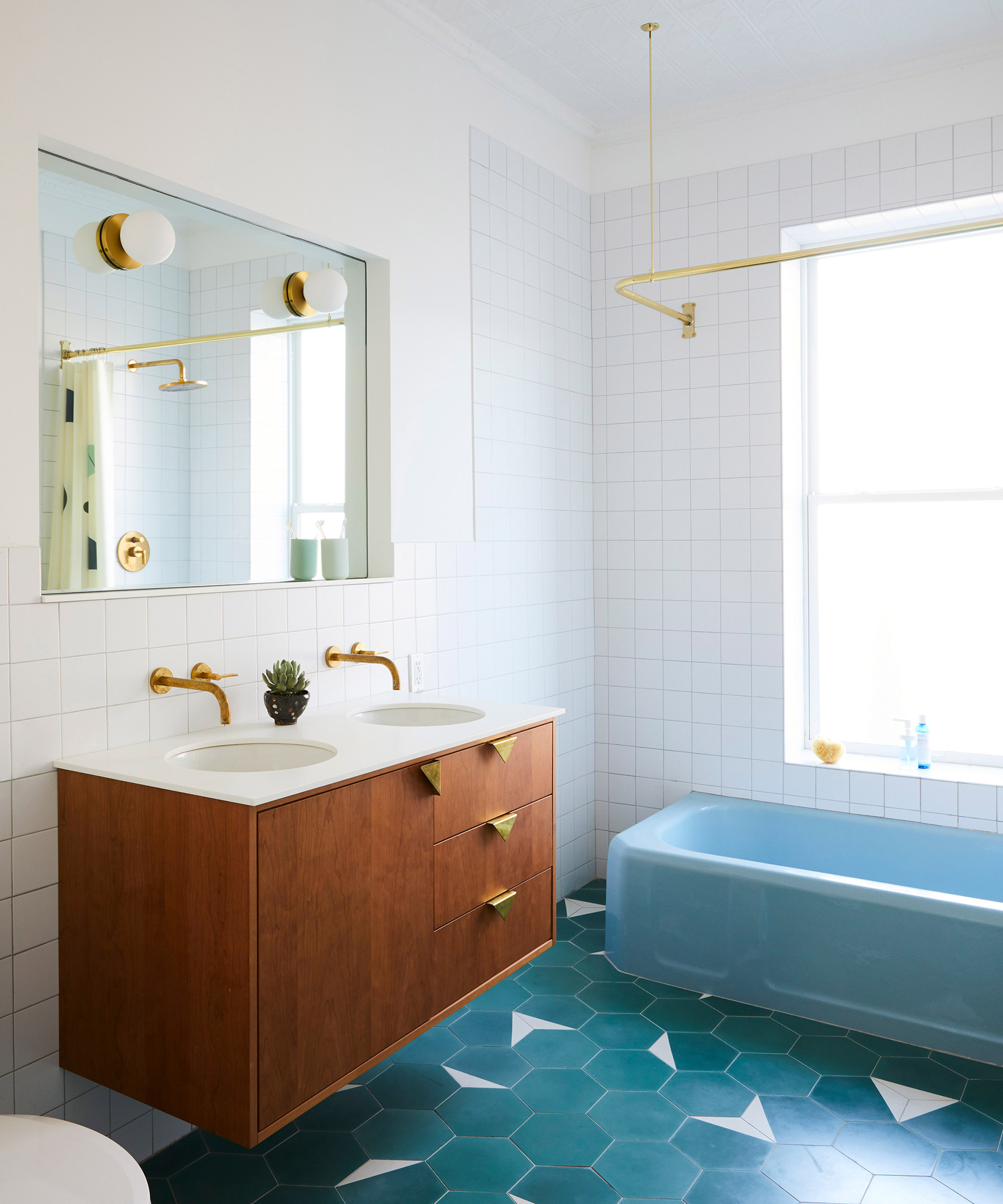 A focal point of the townhouse is a white, metal spiral staircase that was added at the rear of the property. The stairs land at a storage area at the lowest floor level, in the more recent two-storey addition. Access to the back garden is provided here through a new glass door.

“As landmarked buildings require a literal approach to facade preservation, we set a gradient from invisible improvements facing the street to obviously new elements towards the rear,” the studio said. 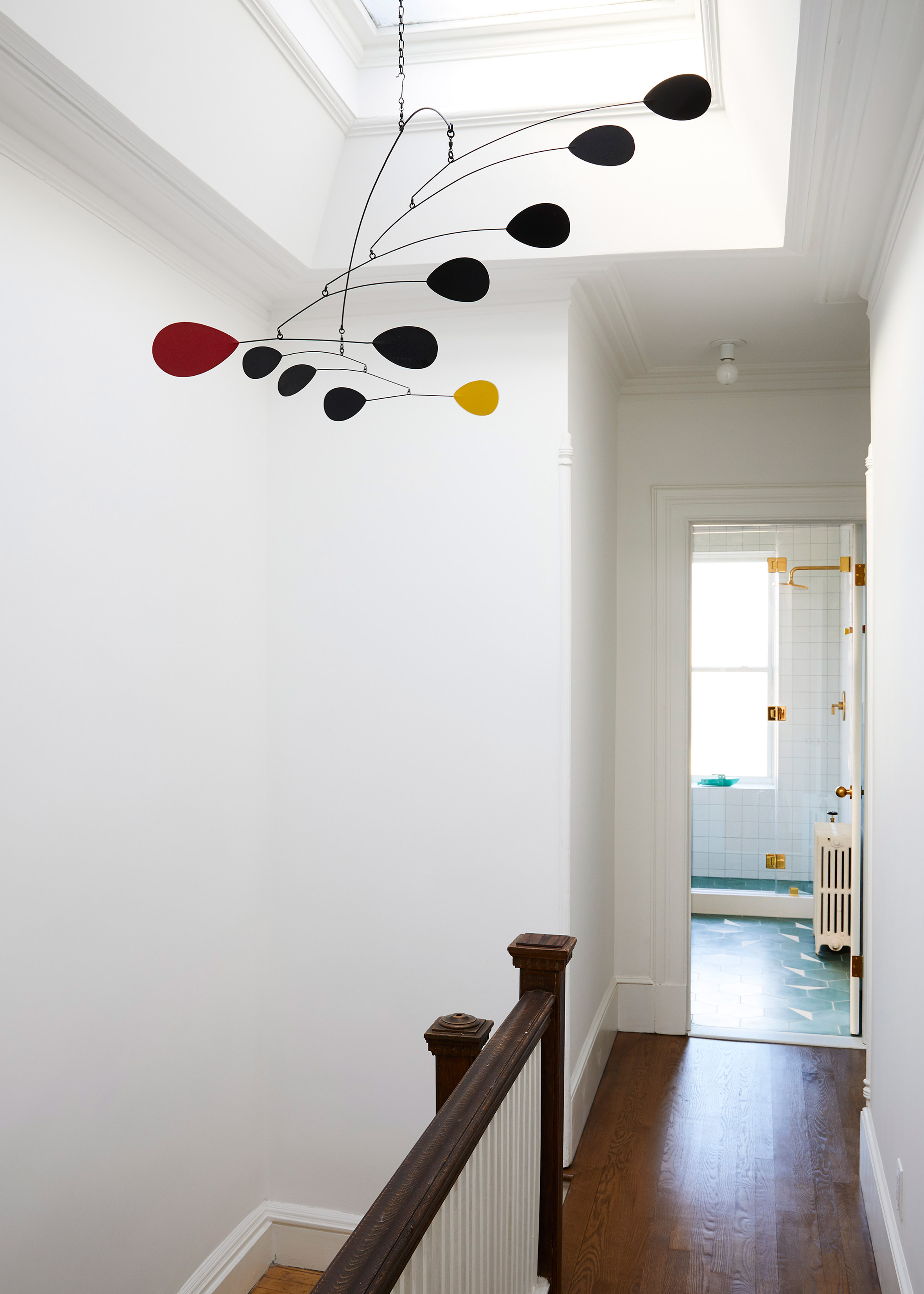 A lounge, bathroom and bedroom are also located on this lower level. The third floor level, which is set above the main living space, is dedicated entirely to a master bathroom and an office.

A walk-through closet links the two spaces together, without requiring passage through the stairwell. Plywood cabinet doors are treated in a pale green stain to highlight the wood grain, complement the verdant palette seen throughout.

Continuing the contrast between old and new, GRT Architects have peppered the interiors with mid-century furnishings and new lights fixtures by Raco and Andrew Neyer. 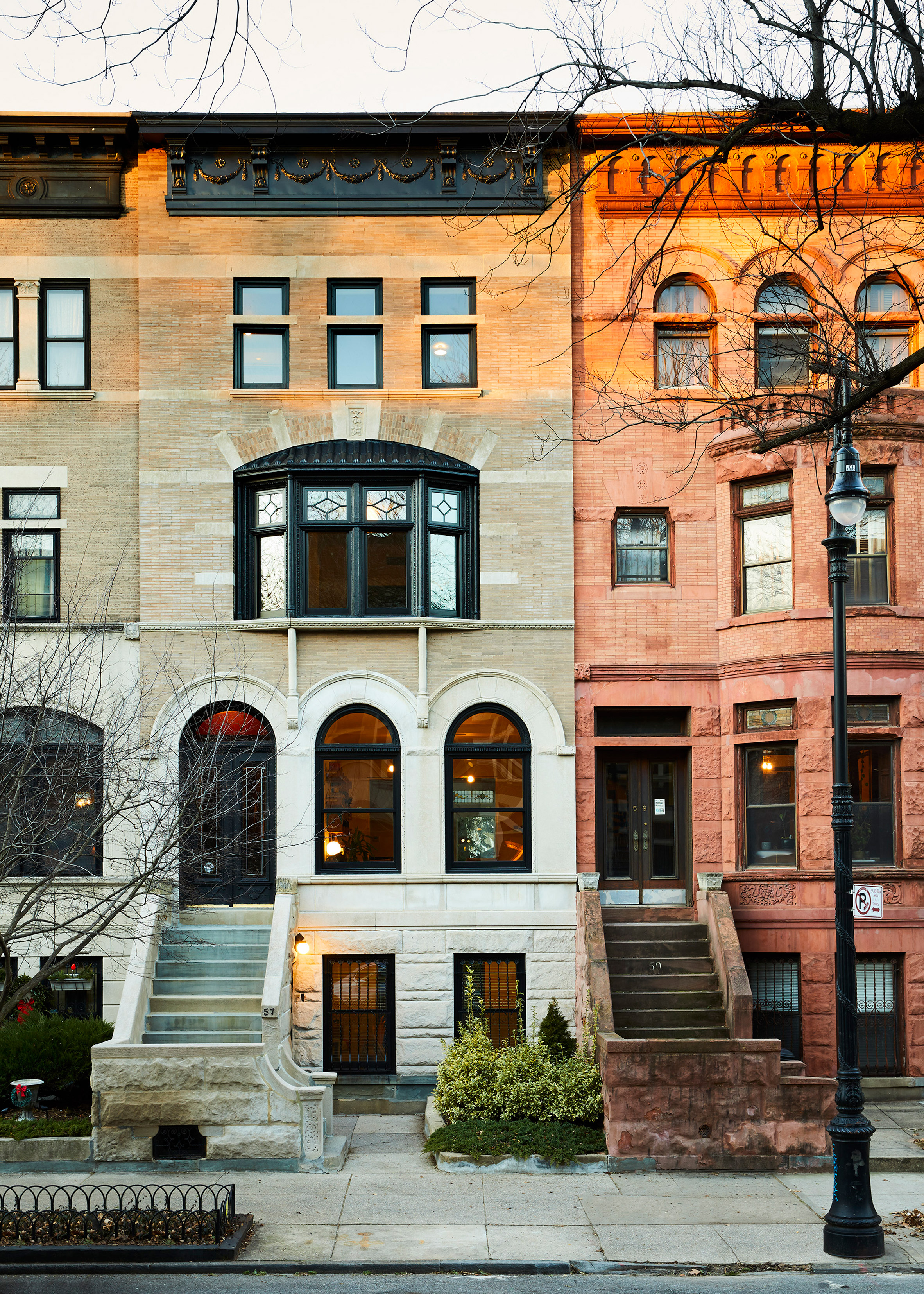 GRT Architects – based in Brooklyn’s Greenpoint neighbourhood – chose similar mid-century accents for the renovation of a townhouse in the borough’s Fort Greene area, where it also added a fluted glass stairwell, and pops of lavender and white.

The studio has also worked on renovation projects in Manhattan, including the transformation of the top of a 19th-century building into an office with a pink kitchen and navy lounge, and restoring the decorative exterior of Fashion Tower.

Photography is by Nicole Franzen unless stated otherwise.