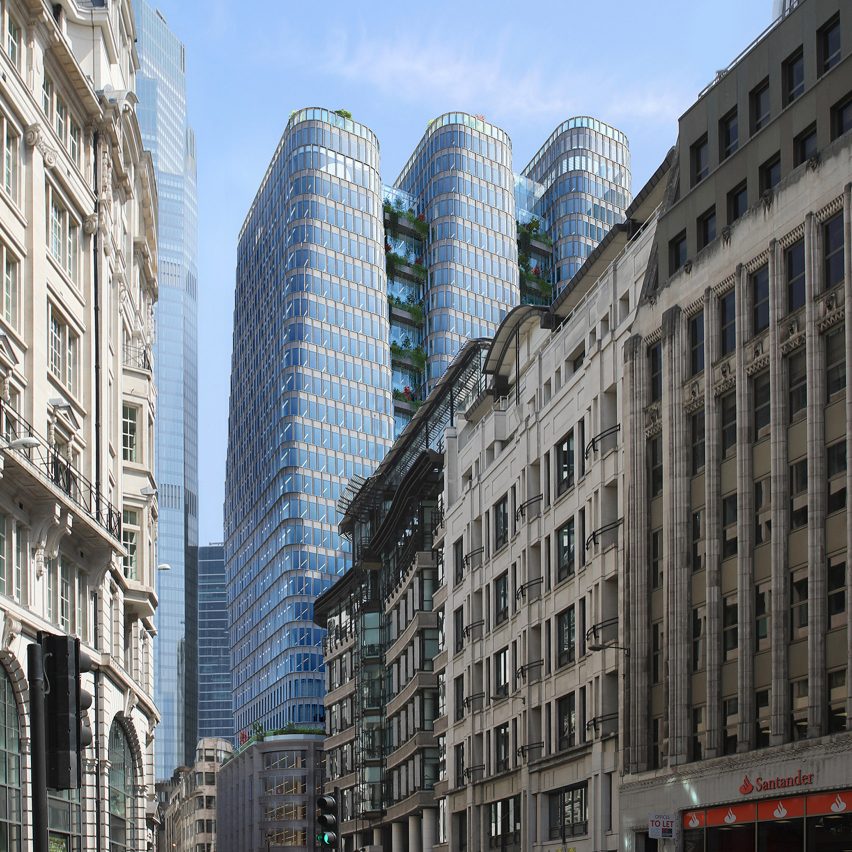 Kohn Pedersen Fox has unveiled its design for a trio of skyscrapers linked by vertical planters, which is set to be built at 70 Gracechurch Street in the City of London.

The 154.7-metre-tall complex is designed by Kohn Pedersen Fox (KPF) to host a mix of office and retail spaces, alongside a viewing platform on its upper floors.

It is intended as a “new voice” for London’s Eastern Cluster – a group of skyscrapers that also includes KPF’s Scalpel tower, alongside RSH+P’s Leadenhall Building and Rafael Viñoly’s Walkie Talkie.

The design for 70 Gracechurch Street comprises three tapered glass towers, which are elevated on top of a stepped podium and linked by stacks of planters.

It was commissioned by Hong Kong developer Tenacity to replace an existing 10-storey building on the site that was completed by BDP in 2002.

“70 Gracechurch Street establishes a vision for a relevant future office and aspires to be a new voice in the Eastern Cluster,” said John Bushell, design principal at KPF.

“A more articulated building, creating an elegant composition of different elements and integrating urban greening, it provides variety internally and externally to create the sort of workplace it’s worth leaving your house for.”

While the majority of floors will be used as office space, levels 29 and 30 of the towers will be made into a public viewing gallery with a winter garden.

A large portion of the ground floor will also be dedicated to the public, with spaces for flexible marketplaces and pop-up stalls.

KPF hopes this will make “improvements to the public realm” and establish a link to the nearby Leadenhall Market – one of the oldest marketplaces in London.

“The elevated office lobby is on levels two and three, allowing 40 per cent of the space on the ground floor to be accessible as public realm,” explained KPF.

“The vision is for an accessible and lively space where the historic market blends seamlessly with the latest retail innovations.”

According to KPF, the scheme will be five times more energy-efficient per square metre than the existing building and will consume 45 per cent less energy per year in total.

This is expected to be achieved by targeting a BREEAM rating of “outstanding” and through the use of designs such as natural ventilation and a high-efficiency facade.

KPF is an international architecture studio that was founded in 1976 by Pedersen alongside Eugene Kohn and Sheldon Fox. It is responsible for a number of skyscrapers in many of the world’s major cities.

Its design for 70 Gracechurch Street follows its completion of Beijing’s tallest skyscraper, which measures 528 metres in height, and a supertall building at New York’s Hudson Yards that has a 345-metre-high Edge observation deck.

Visuals are by Pixelflakes unless stated.