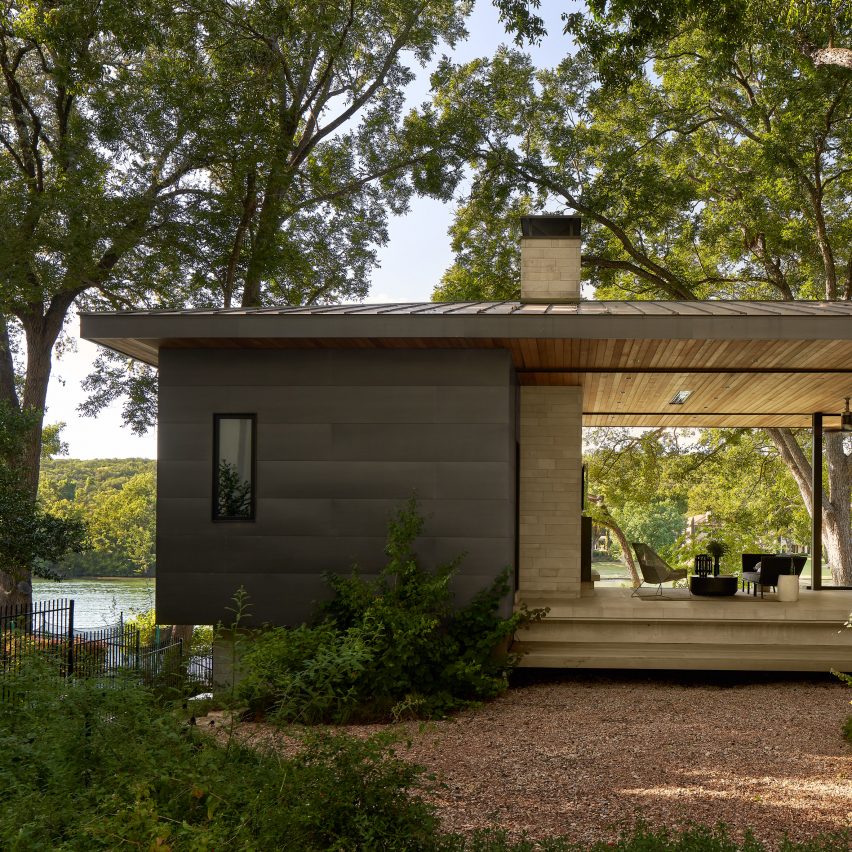 US firms LaRue Architects and Britt Design Group have renovated a 1950s waterfront cabin in Austin, turning it into a full-time residence reminiscent of dogtrot houses in the American South.

Dogtrot houses traditionally feature two cabins separated by a central breezeway under a communal roof, cooling the house in the days before air conditioning and creating a sheltered semi-outdoor space to sit in.

LaRue Architects and Britt Design Group used a breezeway to separate the main house from the guest quarters of Ski Slope Residence, which is named after the street it is located on.

The building sits on an elevated perch above a 1.2-acre wooded site along the west bank of Lake Austin.

Originally, the dwelling consisted of a rustic, hexagon-shaped structure dating to the late 1950s, and a modest extension that was added in the 1970s.

The property was purchased by Lou Ann and Don McLean, who hired two local firms to oversee the project – LaRue Architects, which handled the architecture, and Britt Design Group, which conceived the interiors.

The team was tasked with preserving original elements while updating the dwelling for contemporary use. The first big decision was to keep the footprint of the hexagon-shaped yet rebuild its walls and to completely replace the other structure.

“The design challenge was how to integrate a modern-home design concept into the hexagon geometry and have the final architecture become a cohesive building,” the architects said, noting that they also had to contend with a steep slope in the rear of the property.

The team decided to convert the hexagon element, which formerly held a living room, into a main suite. The remainder of the program is held within a single-storey, bar-shaped volume that runs perpendicular to the hexagon wing.

One side of the bar encompasses an open-plan living room, dining area and kitchen, while the other contains a bedroom and an office. The central portion holds an entryway and a grand piano, along with a wine cellar – an important addition given the clients own a vineyard in Argentina.

Just beyond the house is a new guest suite. Situated between the guest quarters and main dwelling is the breezeway, which is adorned with a fireplace and lounge furniture.

“It has a generous roof overhead with a warm, wood-clad ceiling, which protects the space from the sun and other elements,” the team said.

One side of the breezeway steps down to a skinny, above-ground swimming pool. Held within limestone-faced walls, the pool rises up from the sloped site.

Inside, the team used neutral colours and earthy materials, including white oak floors, to tie the home to its natural setting. The owners’ personal furnishings were incorporated throughout the dwelling.

“The clients have a wonderful collection of art objects and furnishings they’ve collected from their travels around the world,” said Laura Britt of Britt Design Group. “Weaving their personal story into the fabric of the overall design was a fun challenge.”

The living room is dressed with streamlined sofas, a low-lying armchair and a round coffee table. The adjacent dining area has a custom-built table made of wood from the property.

The kitchen is fitted with custom walnut cabinets with wooden legs. Other distinctive elements include a glass-front refrigerator, an armoire used to hold coffee-making equipment, and lighting fixtures from the New York studio Apparatus.

In the main bathroom, the team put special care into creating a relaxing atmosphere.

“The owner’s bathroom has a serene, ethereal feeling, with dappled light cascading across the large soaking tub and modern porcelain floor,” said Britt.

Throughout the residence, large windows offer a strong connection to the landscape. Along the water, a new boat dock with a rooftop deck offers another vantage point for taking in the scenery.

Other projects along Lake Austin include a house by A Parallel Architecture that features stone cladding and wood-trimmed windows, and a two-storey boathouse by Andersson-Wise with openings that allow people to dive directly into the water.

Photography is by Dror Baldinger.