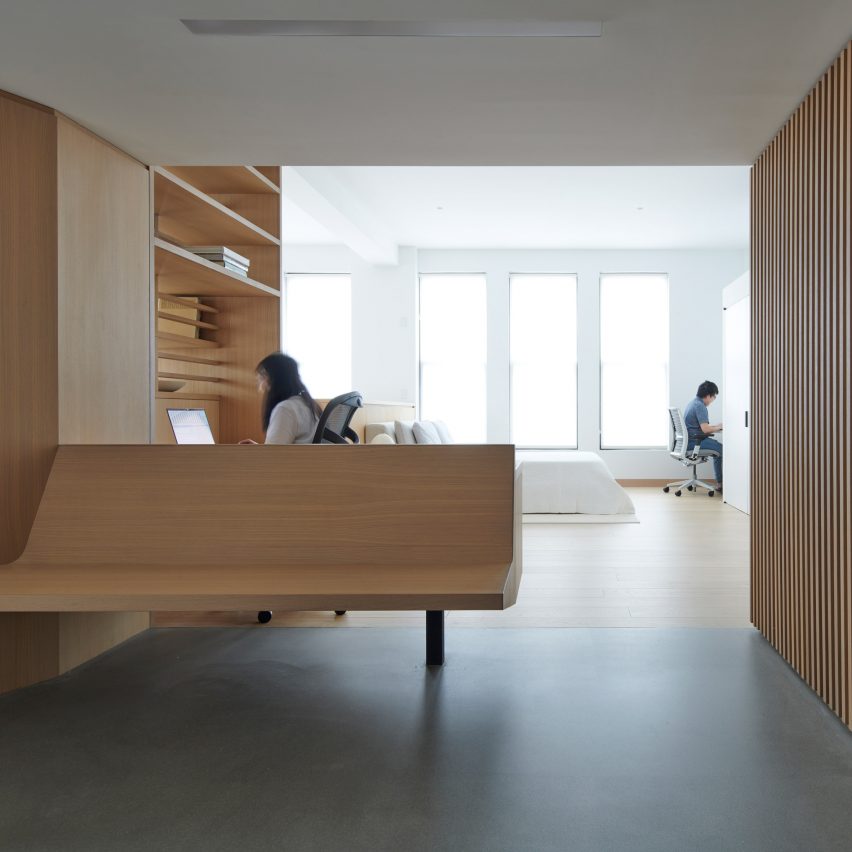 Occupying the 12th storey of a converted commercial building in one of Manhattan’s historic neighbourhoods, the apartment has generous windows and floor area, but previously made poor use of these qualities and felt cramped.

“The existing conditions stifled the unit’s access to light and air,” said the design team. The owners tapped Shane Neufeld, of  Brooklyn-based Light and Air Studio, to rethink the space.

“The space featured a low-hanging storage loft that hovered over the entry and a sprawling closet that loudly commanded the center of the space, disrupting any potential for meaningful visual connections,” said Neufeld.

“Our goal was to maintain the functionality of the storage loft while creating a more generous entry and rethinking the programming and materiality of the apartment in its entirety,” the designer added.

The team removed many of the apartment’s internal walls and reduced the footprint of the overhead storage loft to allow taller ceilings. Within the reconfigured welcome area, custom closets, shelving, and a sculptural wooden bench provide plenty of storage, some behind a slatted wooden wall.

Light and Air also updated the flooring in this area, marking the transition between the concrete of the building’s corridors and the apartment’s hardwood. The polished concrete is also found in the kitchen and bathroom.

Within the 1,200 square-foot (111-square-metre) apartment, Light and Air partitioned the space using open shelving, allowing some perspectives to stay open between the living room and bedroom.

“Our strategy took the shape of an open floor plan with minimal partitions and reducing the existing material complexity through a more straightforward approach,” said Neufeld.

The living and dining room is positioned in the corner of the unit and has windows facing in two different directions. 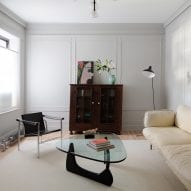 These spaces were connected to the kitchen, which remained in the same location, but was updated with matching cabinetry, new appliances, and an additional sink that provides more functionality.

Throughout the apartment, the designers employed a minimal palette. The walls have no base moulding, there is flush cabinetry, and custom, built-in desks.

“As one moves in and around the different elements (some floating effortlessly off the ground), its functional variety and formal character become more readily apparent,” Neufeld concluded.

Light and Air studio, also known as L/AND/A, was founded in 2017. The firm also designed a townhouse in Brooklyn, with a skylight illuminating a central staircase.

Other New York City apartment renovations include a “minimal but warm” apartment that was designed by Selma Akkari and Rawan Muqaddas, and a loft on Broadway that local studio Worrell Yeung reconfigured to meet the needs of a growing family.

The photography is by Kevin Kunstadt.