A dark blue storage unit stands boldly against the otherwise all-white kitchen at this house in Montreal, where the same minimalist aesthetic continues throughout the interior.

The House on Drolet Street is a combined effort from Dominique Jacquet and Anne Sophie Goneau, who designed the new residence to be as pared back as possible while presenting pops of personality. 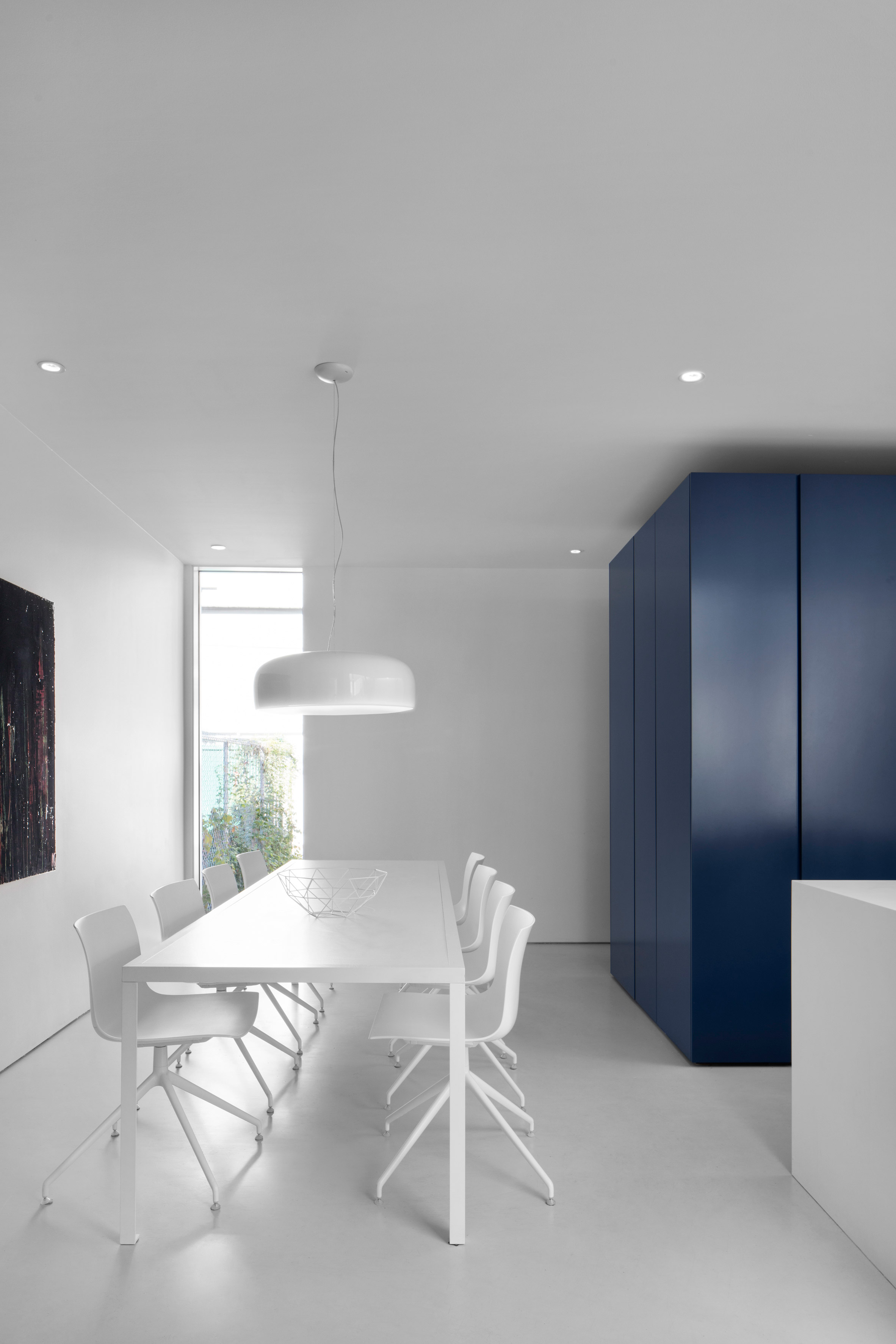 From the front and back, the two-storey building appears almost cube-shaped. Long vertical windows, the same proportions as the doors, puncture the white-painted brick facades.

“The openings are positioned in such a way as to preserve privacy without compromising the entrance of natural light and the view of the external environment,” Goneau said. 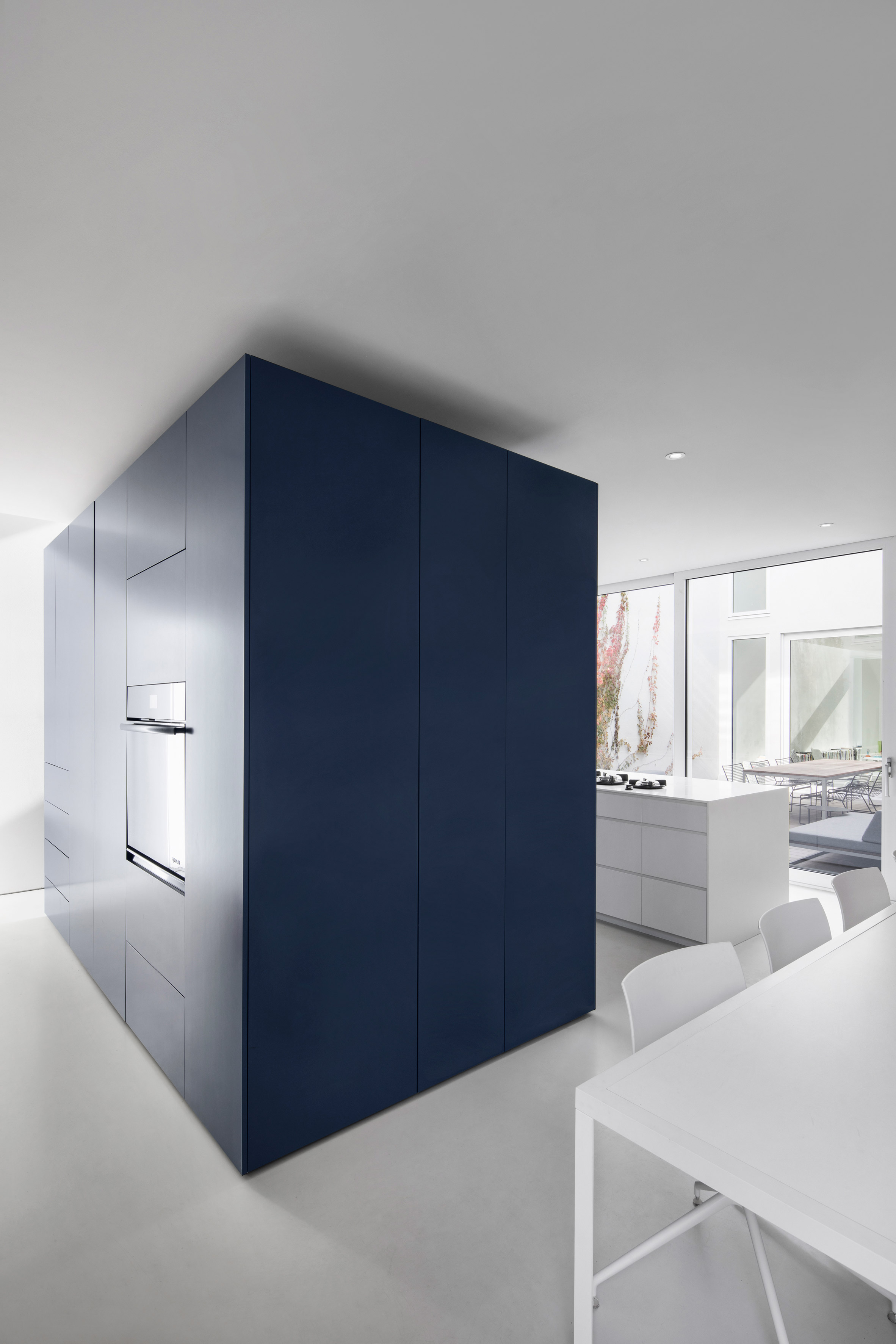 A stack of horizontal concrete planes that don’t quite touch each other forms steps up to the entrance.

Inside, the colour palette is just as stark. White is used for almost all of the surfaces and furniture, with just a few prominent exceptions. 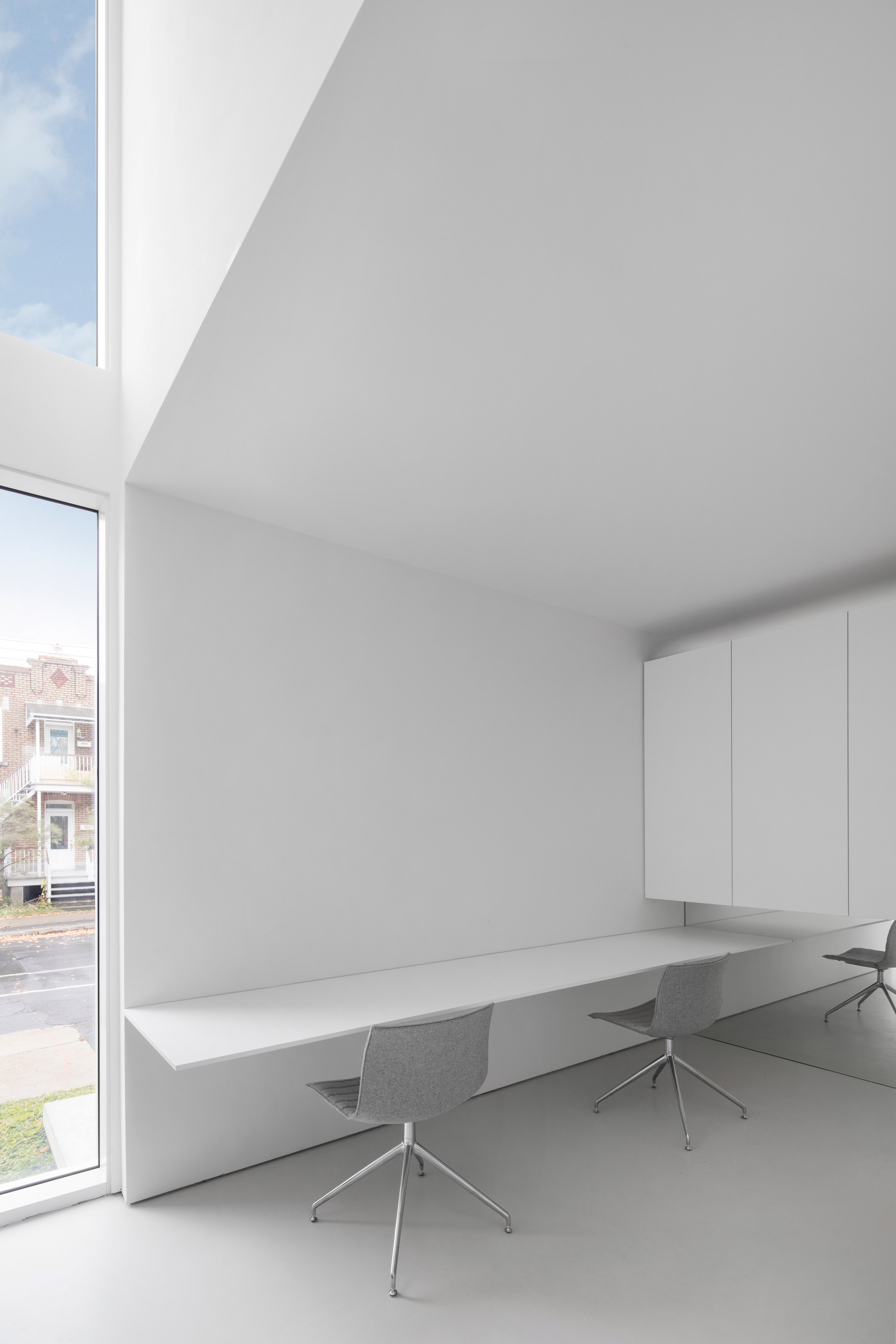 “The general layout is a deployment of blocks in space, made of solid materials that are distinguished by their texture, colour or materiality,” said Goneau.

Both levels are organised around a central courtyard, which divides the plan roughly in two. Rooms on either side have large windows facing onto this enclosed outdoor space, so it acts like a light well. 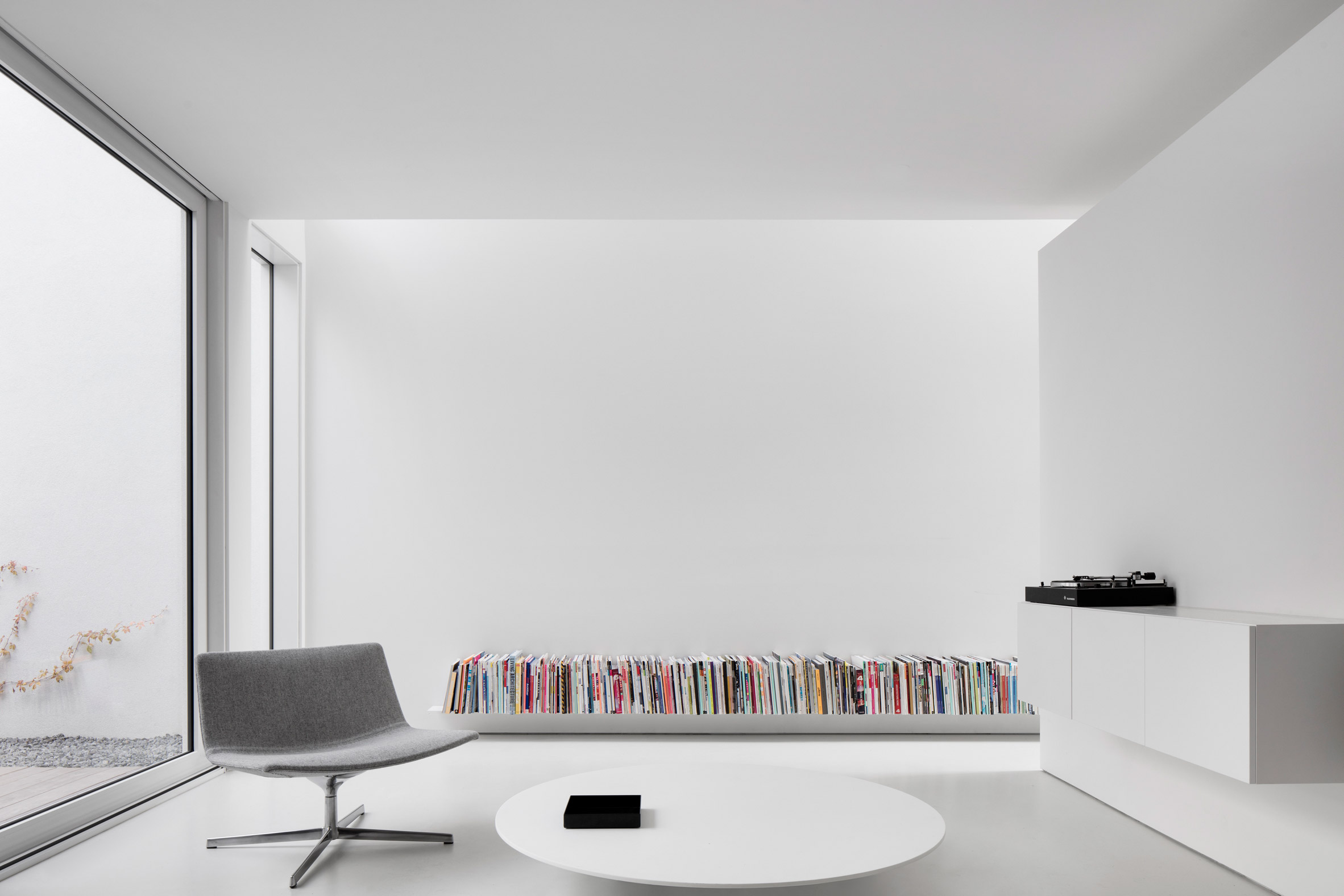 The front portion of the ground floor is occupied by an entrance hall, a sitting area and a study – all partitioned from one another but without doors. Contrast with the white decor is created by a black sofa and a dark fireplace, plus carefully placed accessories like a record player and a tray of the round coffee table.

The upper storey is stepped back slightly from the external wall, creating a thin double-height space along the edge of the house. A long, low bookshelf runs along this rift, connecting the study and lounge connect, to highlight the change in ceiling level. 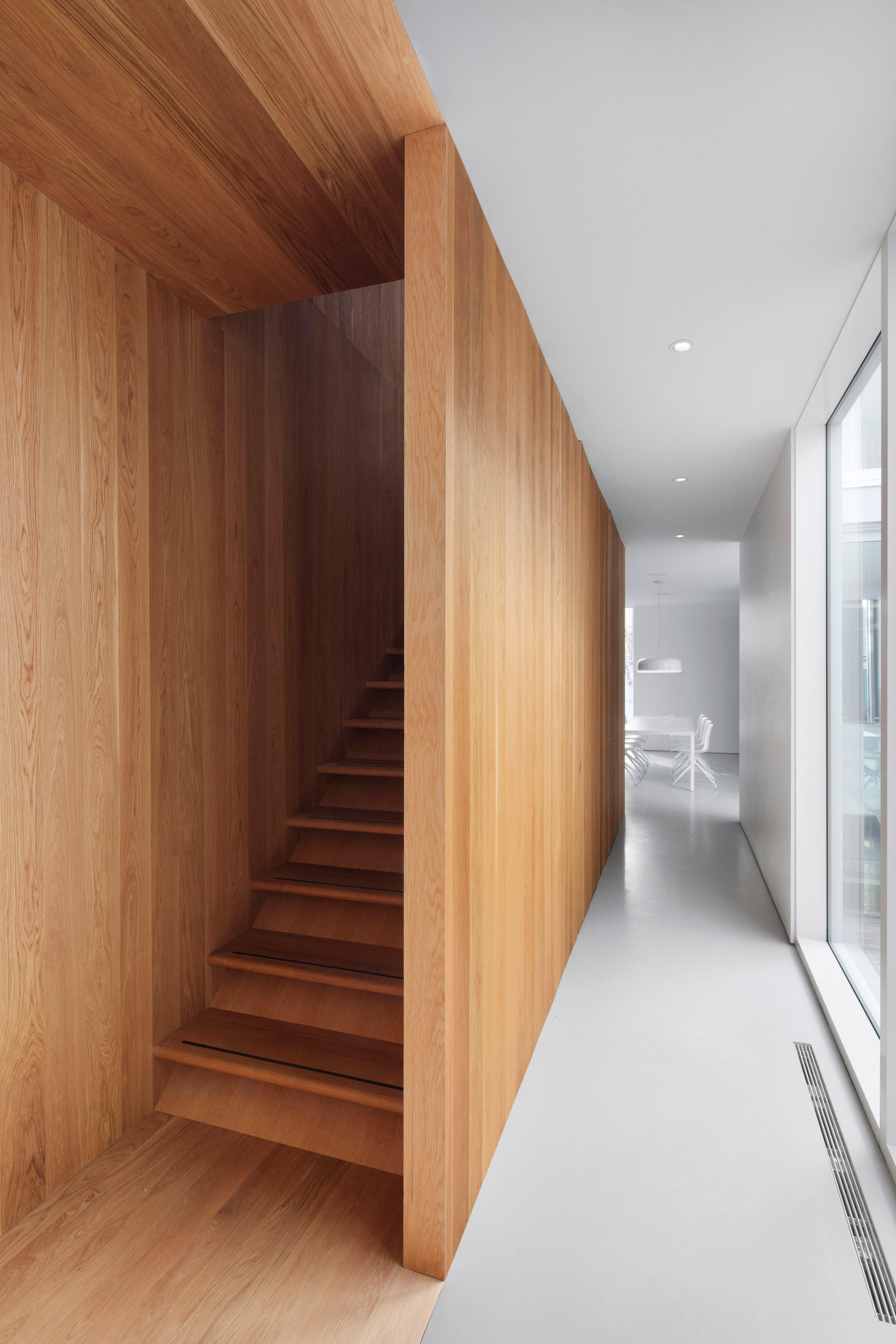 The same first-floor setback occurs on the other side of the courtyard, where the kitchen and dining room are located. Dividing this space is a floor-to-ceiling unit coloured dark blue, which contains cupboards to hide clutter, the oven and the refrigerator. “Deposited on the ground, it creates in periphery a zone of circulation,” Goneau said. 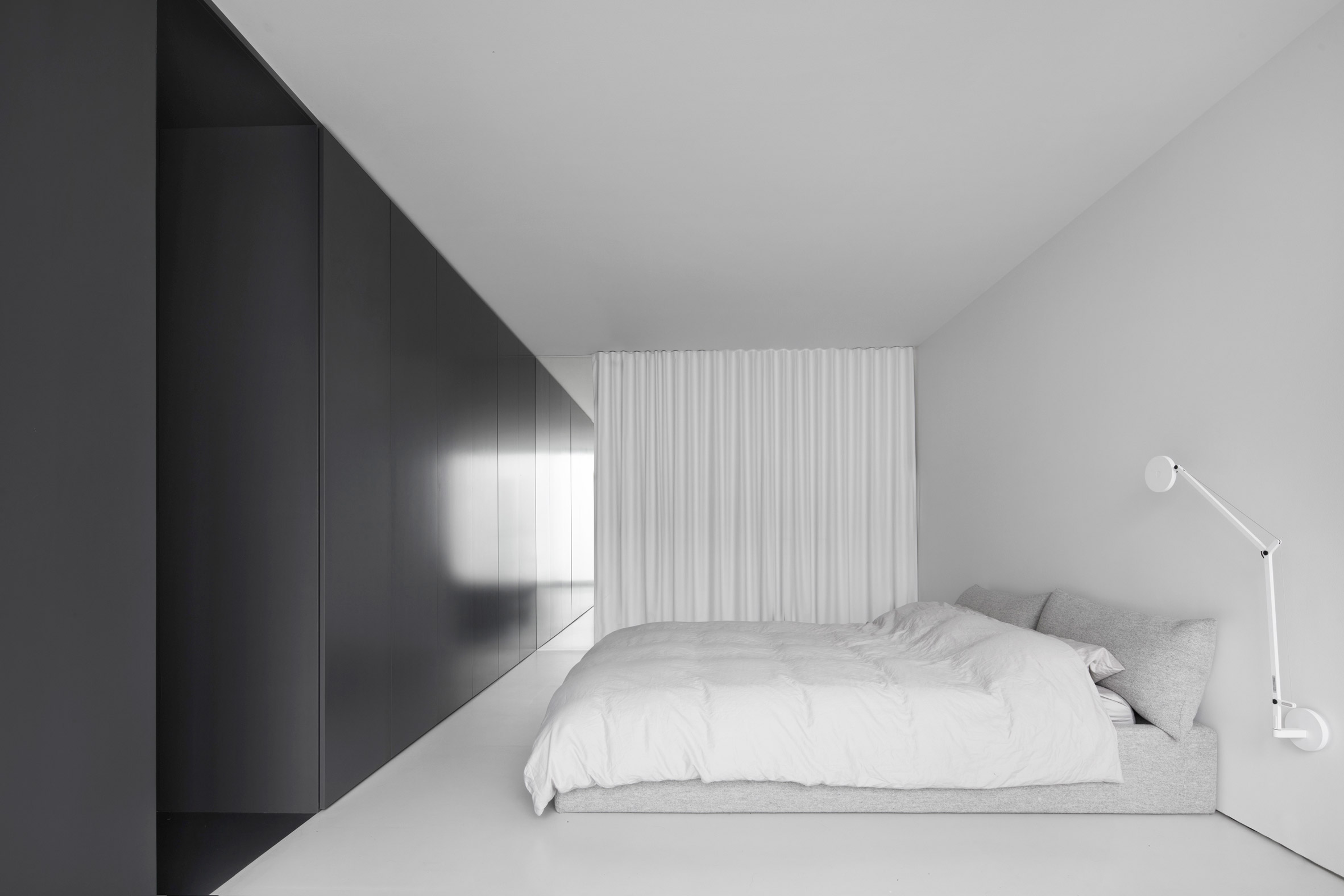 A lower kitchen island features an integrated stove with black details, and a sink with a metal faucet.

Another of the “blocks” that break up the interior is an entirely wooden staircase, which also houses a large cupboard and a small bathroom on the ground floor. Placed between the two sides of the home, opposite the courtyard, the timber adds warmth to both halves. 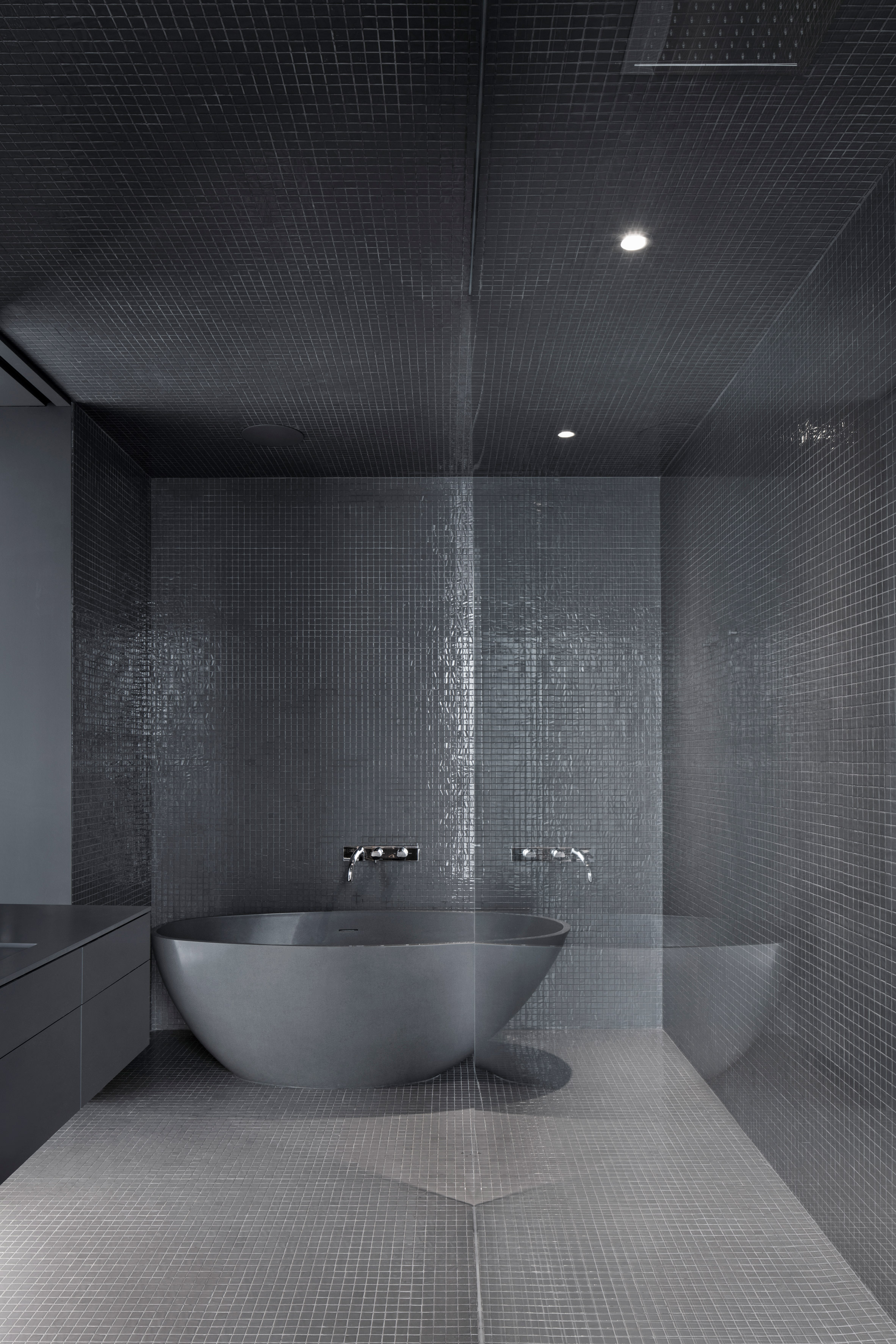 The treads are affixed to a sloped panel connecting the two levels and a translucent pane allows natural light in from high up. “The staircase space, darker, marks a pause at the passage of the two bright levels,” said Goneau.

Again split into two by the courtyard, the layout places a master suite at the back, and a kids’ room, bathroom, and spare room used as a nursery towards the front. 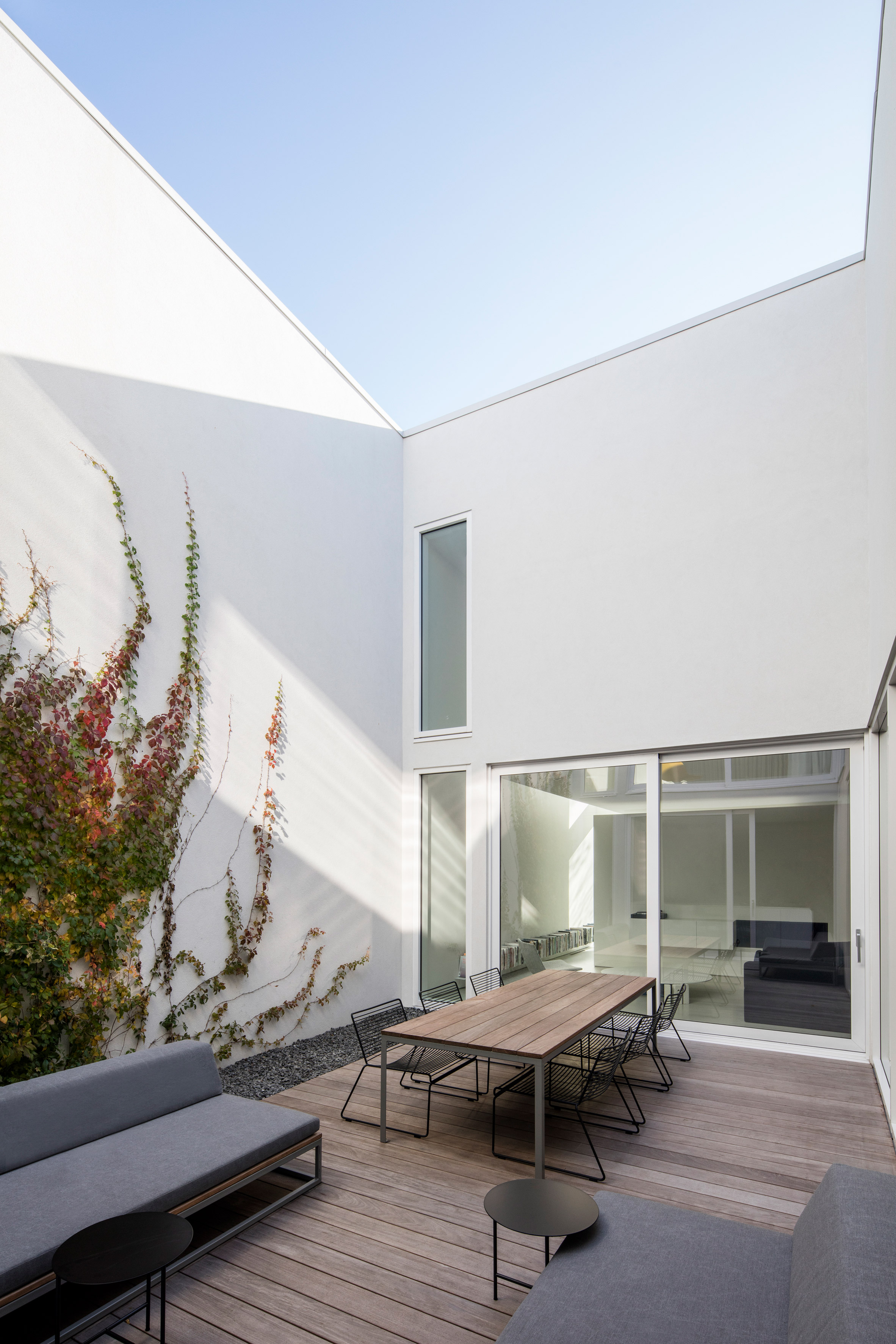 In the main bedroom, a yellow chair provides the accent and dark grey closet covers a full wall. The same hue is used across the bathroom behind, from the mosaic tiles on almost every surface to the freestanding tub. 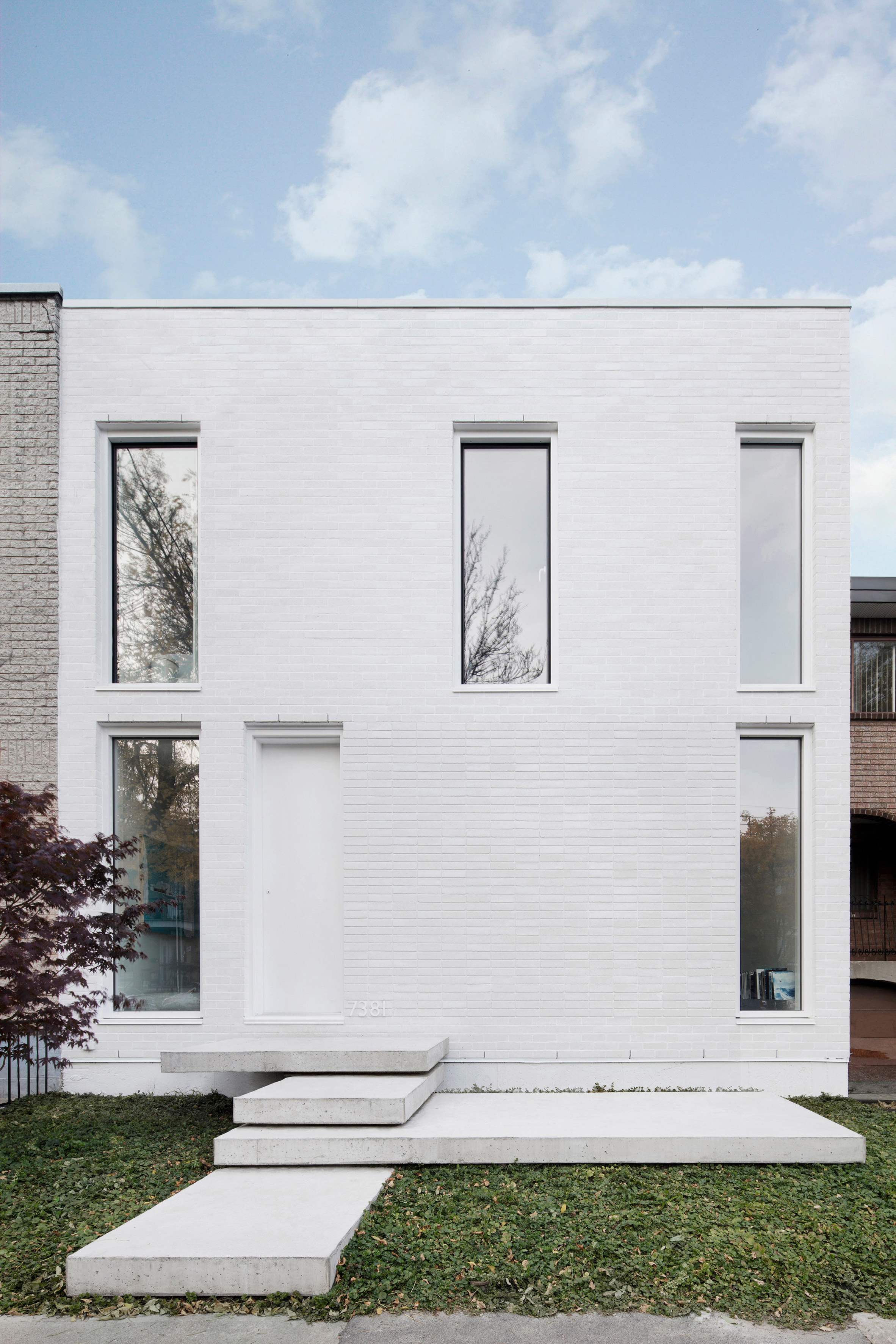 The home’s decked courtyard is furnished with sofas and a dining table, with plants growing up one wall adding a touch of greenery.

Canadian designer Goneau is no stranger to minimalism, having previously completed a workspace for a tech company and an apartment renovation that are both also in Montreal and equally pared back.

The post Montreal home by Dominique Jacquet and Anne Sophie Goneau is minimal inside and out appeared first on Dezeen.