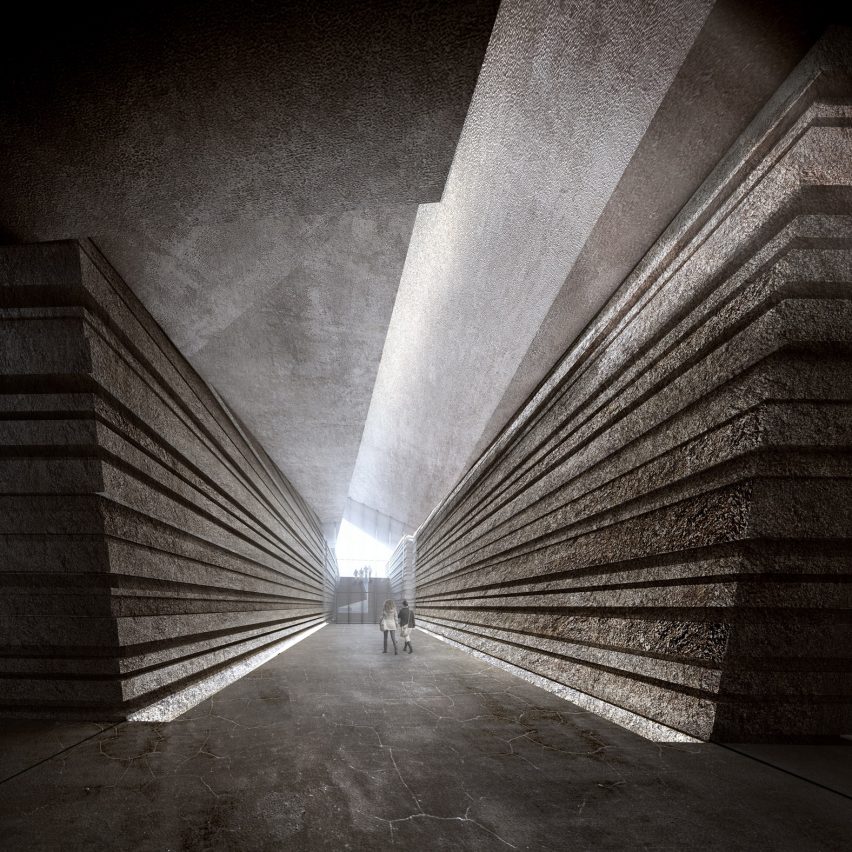 The underground Museum of the Great Famine by Nizio Design International in Kiev, Ukraine, will be topped by two misaligned green roofs.

Dedicated to the millions of victims of Holodomor, or the Great Famine – a manmade famine in the former Soviet Ukraine from 1932 to 1933. 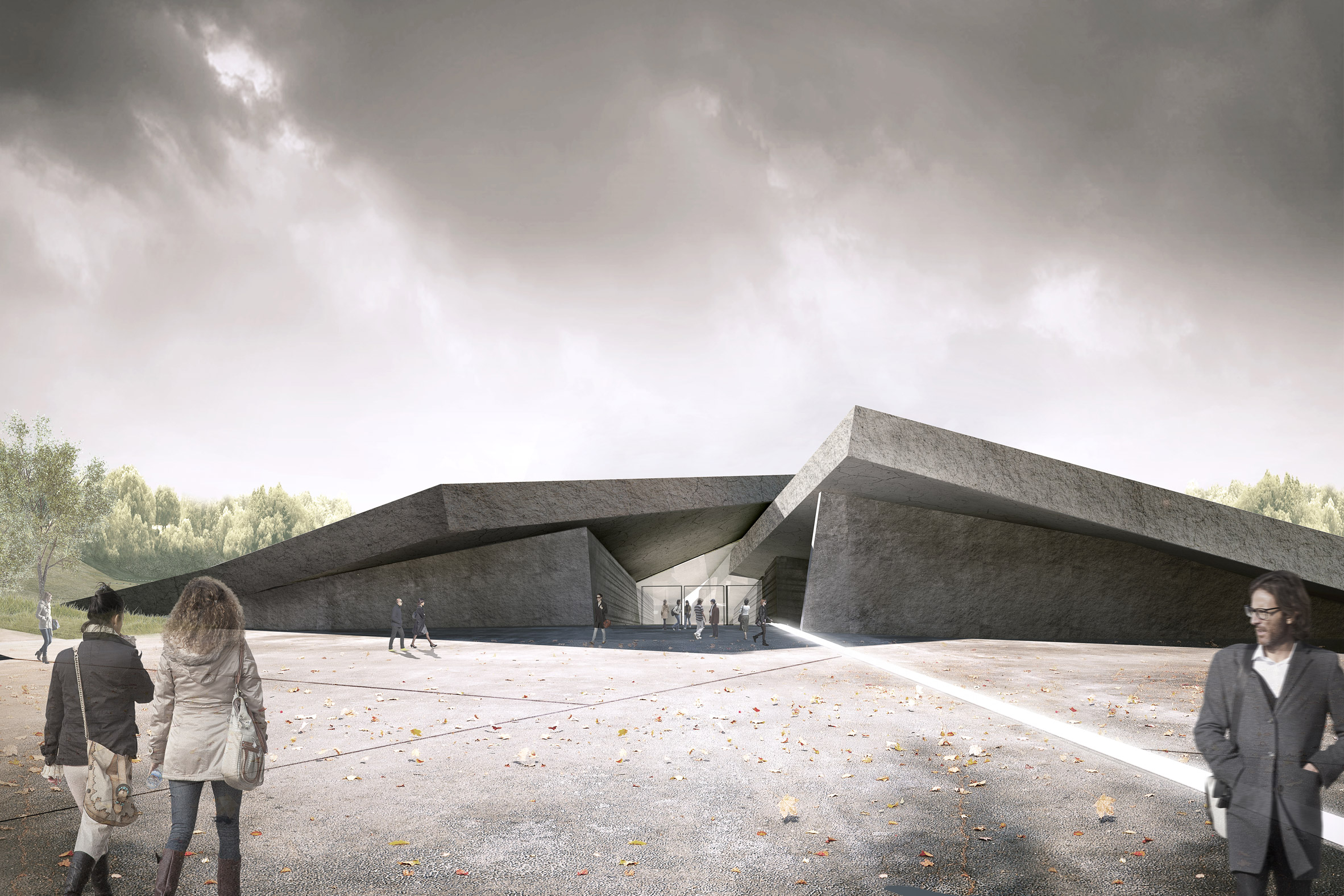 The 14,000 square metre Museum of the Great Famine, which will be the “largest museum project” in the country, is being designed by Polish studio Nizio Design International in collaboration with the Ukrainian design studio Project Systems.

It will sit on the same axis as the capital city’s existing Holodomor museum and candle-shaped memorial. It will have a “tectonic” form created with an angular split roof atop heavy concrete walls that descend down to the subterranean exhibition spaces. 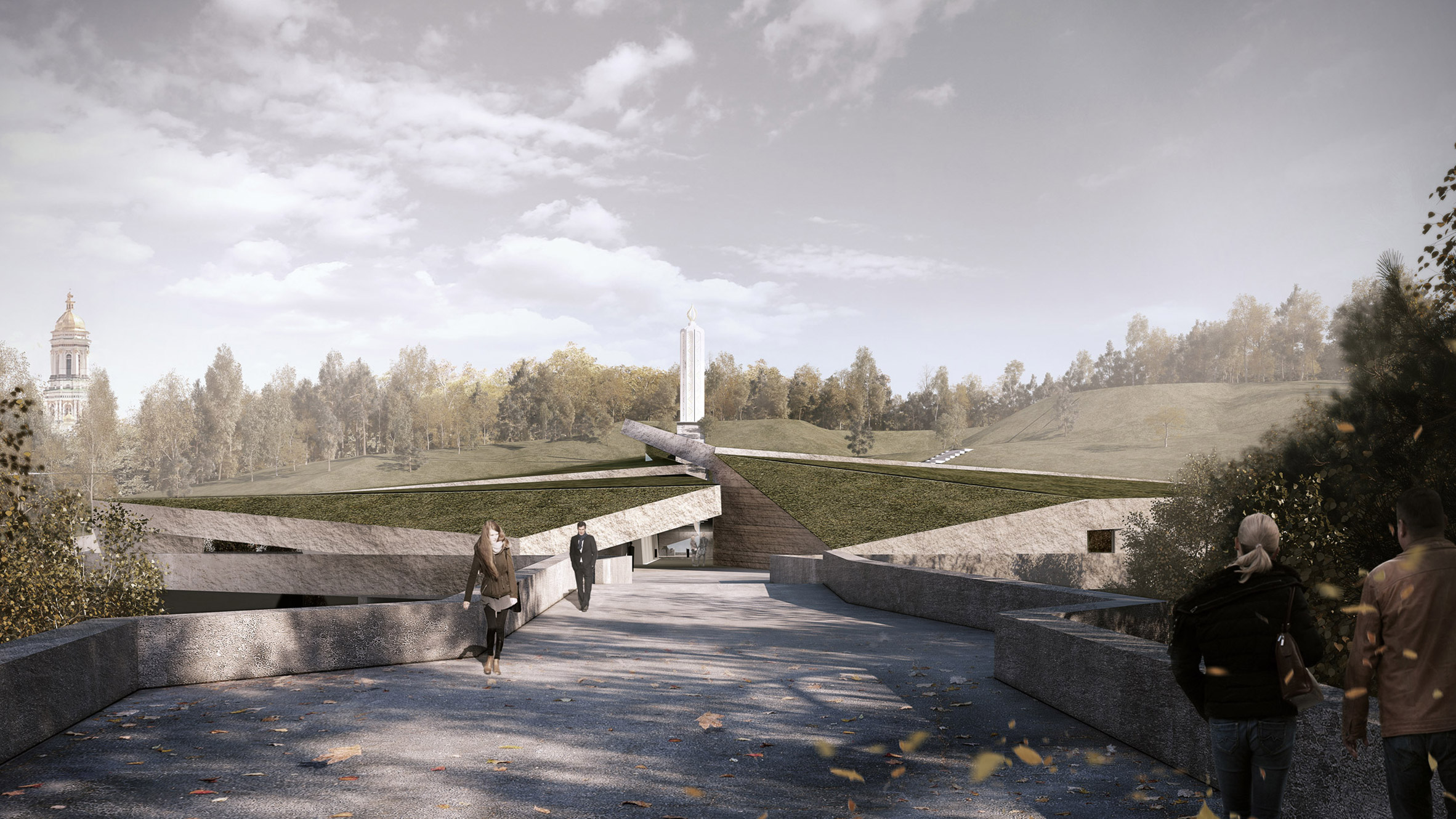 “The starting point for the design of the Museum of the Great Famine is the concept of blending it into the tectonics and landscape of the Dnieper valley slope, near Pechersk Lavra, a place of unique importance in the history of Ukraine,” explained the Warsaw-based studio.

Historians disagree over whether the Holodomor famine was genocide, as it its recognised in Ukraine, or the result of the wider famine in the Soviet Union. The European Parliament recognises Holodomor as a crime against the Ukrainian people.

“The architectural form of the building is an image of the idea of bringing to light the deliberately hidden truth about the Holodomor,” said the studio. 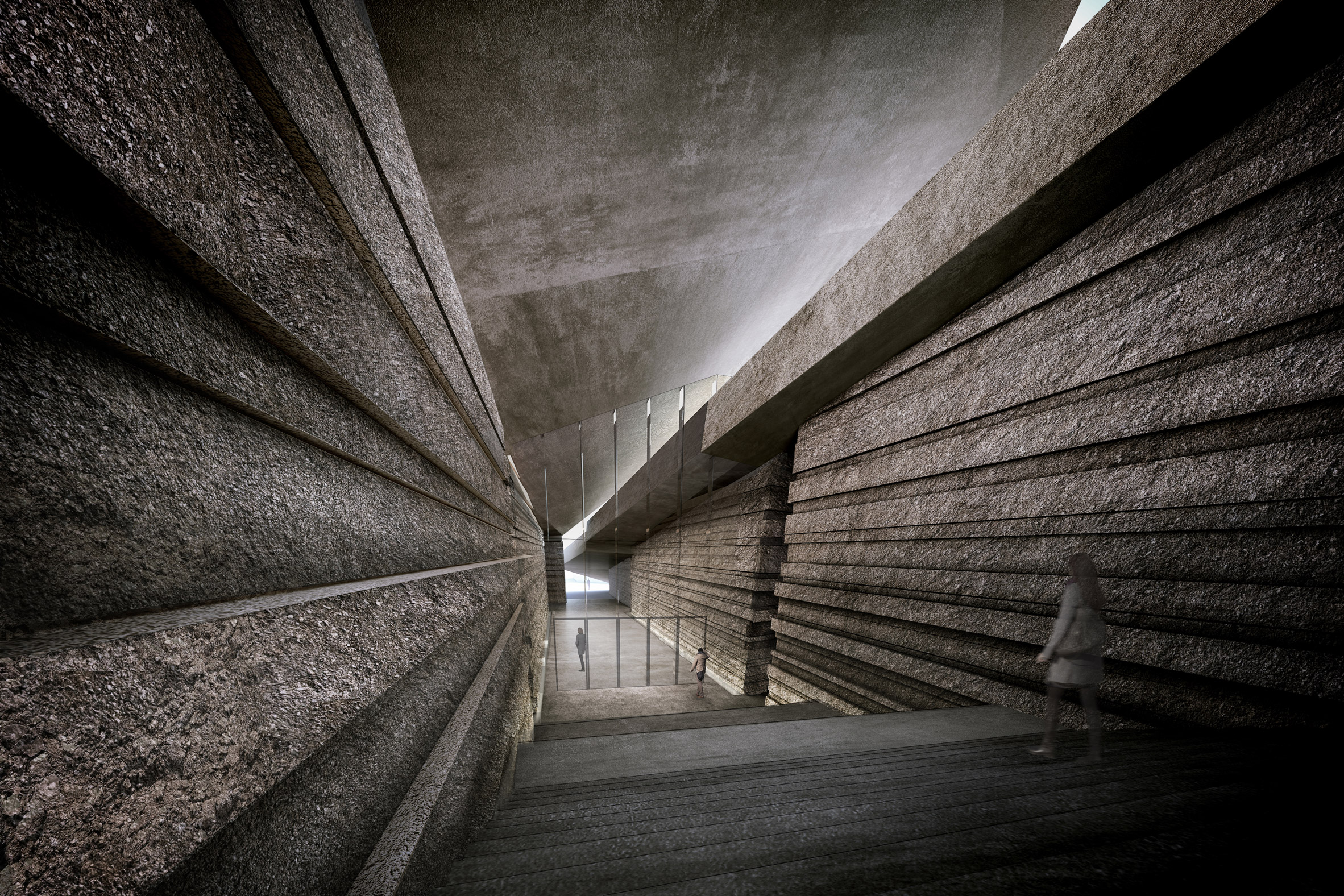 Approximately 3,500 square metres of the Museum of the Great Famine will be dedicated to a permanent exhibition developed solely by Nizio Design International, and designed like a series of theatre sets.

The museum will comprise two contrasting parts, with the first introducing visitors to the reasons behind the famine. A soil motif and angular walls that extend into the space will feature throughout to reference the destructiveness of the Bolshevik revolution in 1917. 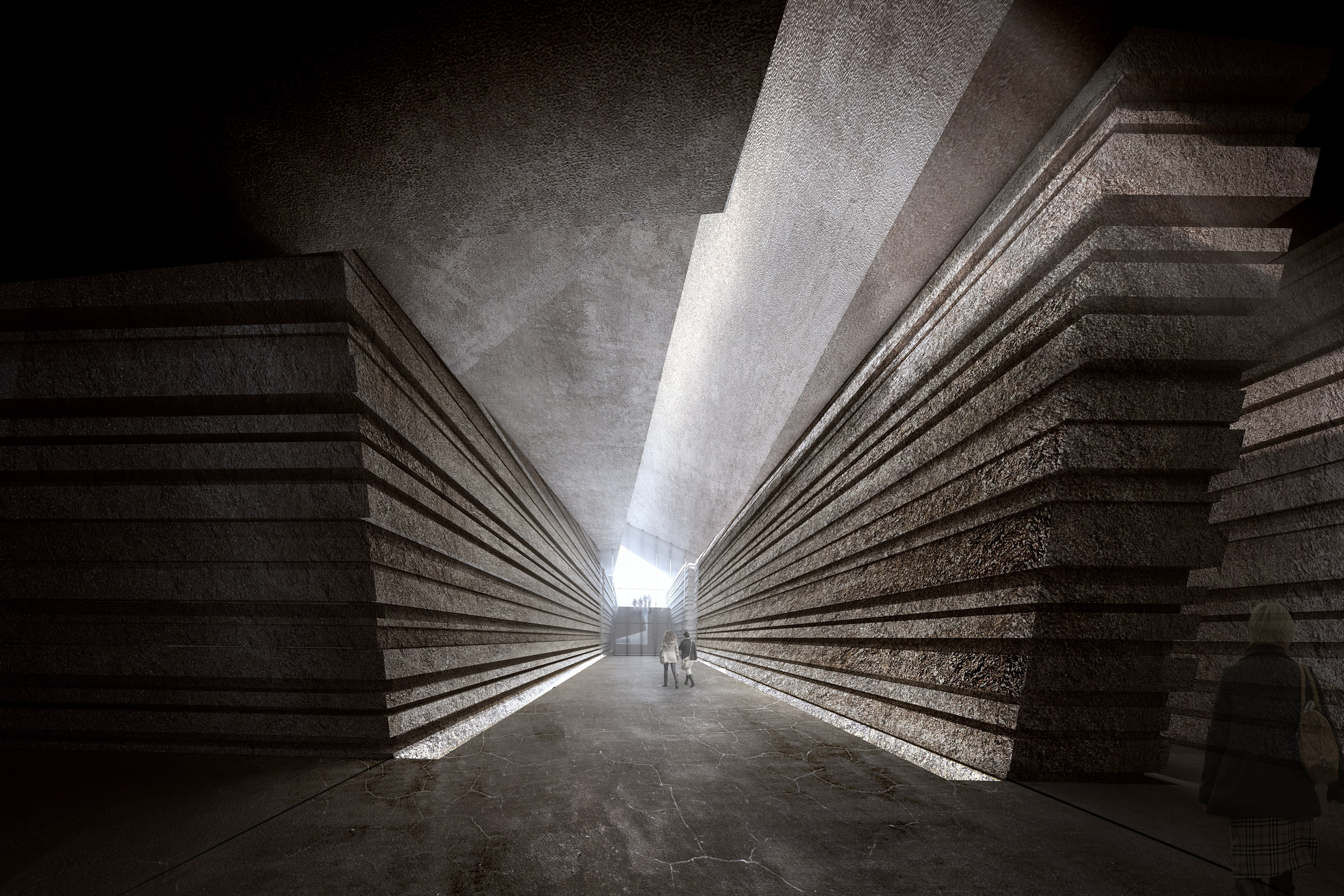 The second part of the exhibition will be dedicated to the “rebirth” of Ukraine, its struggle for independence and the overcoming of trauma that resulted from the Holodomor.

It will feature motifs of green sprouting plants and crops, alongside use of more lighting and a brighter colour palette. 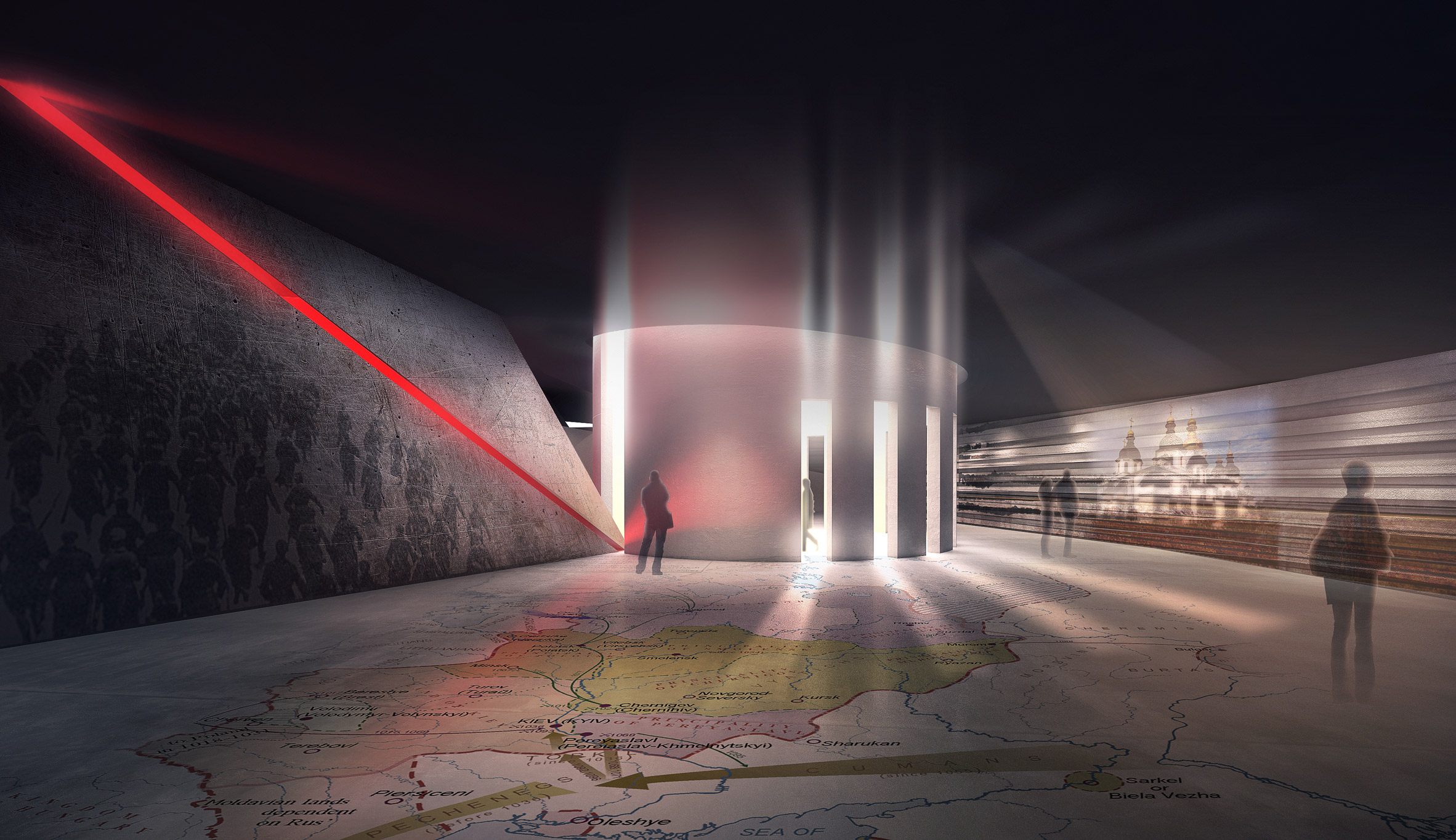 Nizio Design International and Project Systems LTD has also incorporated a “Zone of Silence” within the Museum of the Great Famine close to the exit, which will have soft lighting and plants to offer a quiet place for rest and reflection.

The date of the completion of Museum of the Great Famine has yet to be announced.

In 2017, Studio Architektoniczne Kwadrat also created a subterranean memorial museum in the Polish city of Gdansk on a historic site from the second world war, which is topped by an angular tower.