A pair of symmetrical fibreglass slides spiral down towards the surface of the water at this pool house designed for an English country house by New York architect Rafael de Cárdenas.

Rafael de Cárdenas of Architecture at Large collaborated with London architecture office Purcell to design the pool house for the owners of a mid-19th-century manor in an undisclosed countryside location. 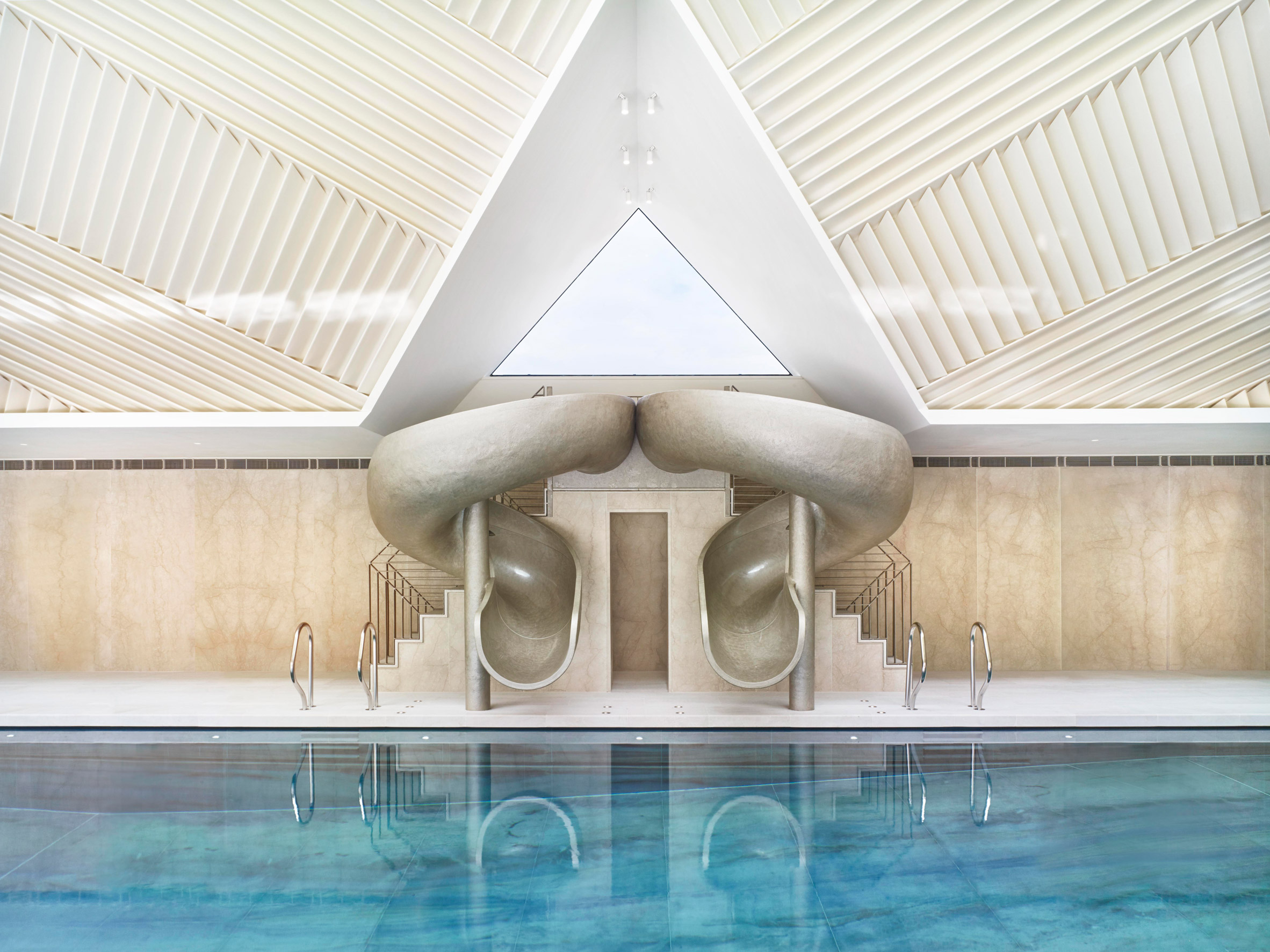 The pavilion is the Manhattan-based architect’s first ground-up project and is representative of his studio’s experiential approach to architecture and design, which sees it apply form and materials to create spaces with distinctive atmospheres.

The pavilion is positioned perpendicular to one side of the manor so the space between the two buildings creates a sheltered courtyard.

Materials including brick and copper used for the building’s exterior were chosen to complement the appearance of the existing manor, but the design also seeks to introduce something unique to the estate. 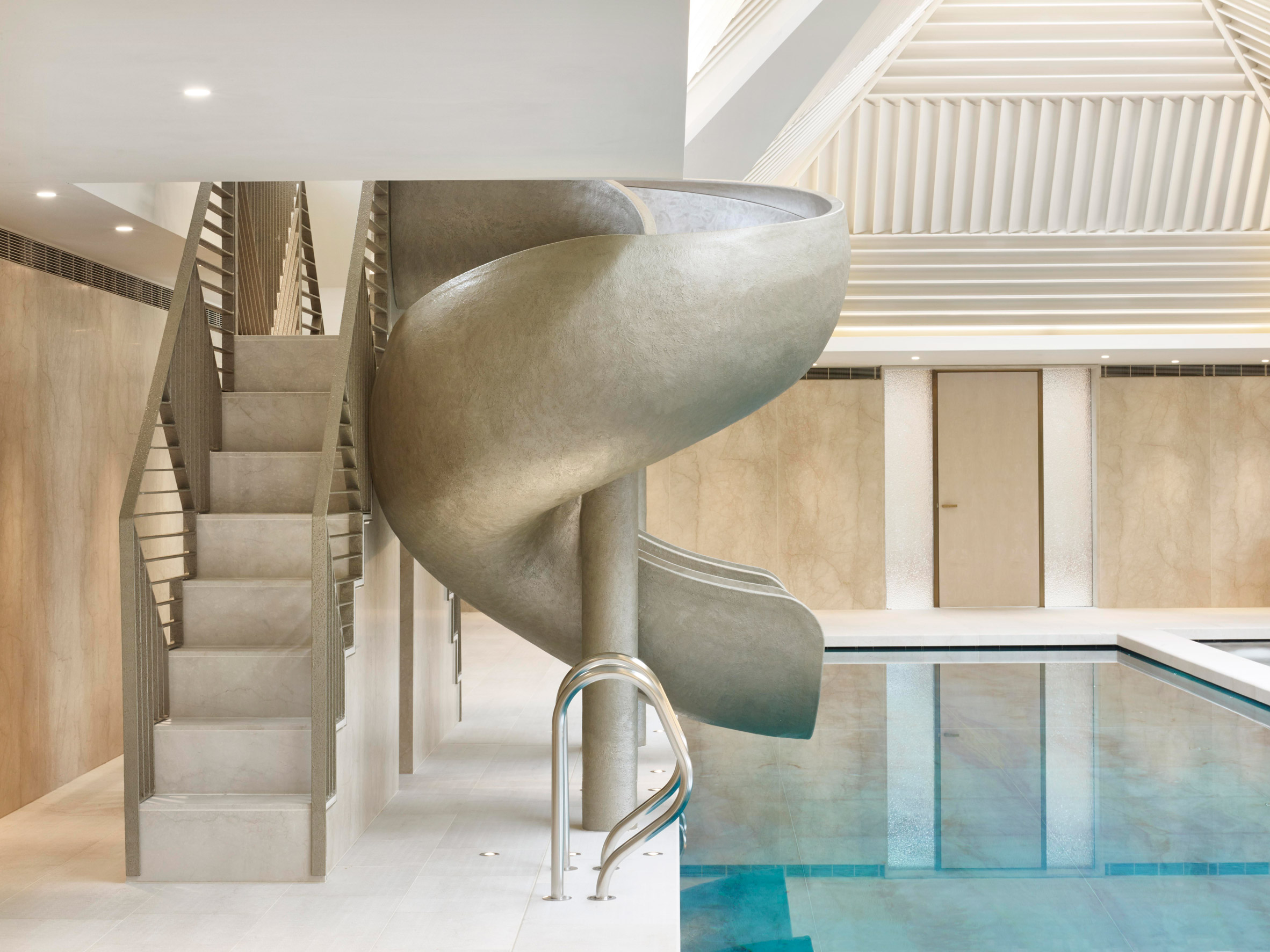 “Given that the pool house was going to be its own building, the main thing was to make it feel like a destination,” said de Cárdenas, “something quite distinct from the main house, but that would draw on and complement its surroundings.”

A roof comprising a pair of funnel-like forms that incorporate large heated skylights helps to organise the interior space and visually separates the pool area from the round structure containing the hot tub.

The inner surface of the ceiling is covered with fibreglass panels featuring angular ridges that help to provide acoustic dampening while also creating a pattern that responds to changing light conditions. 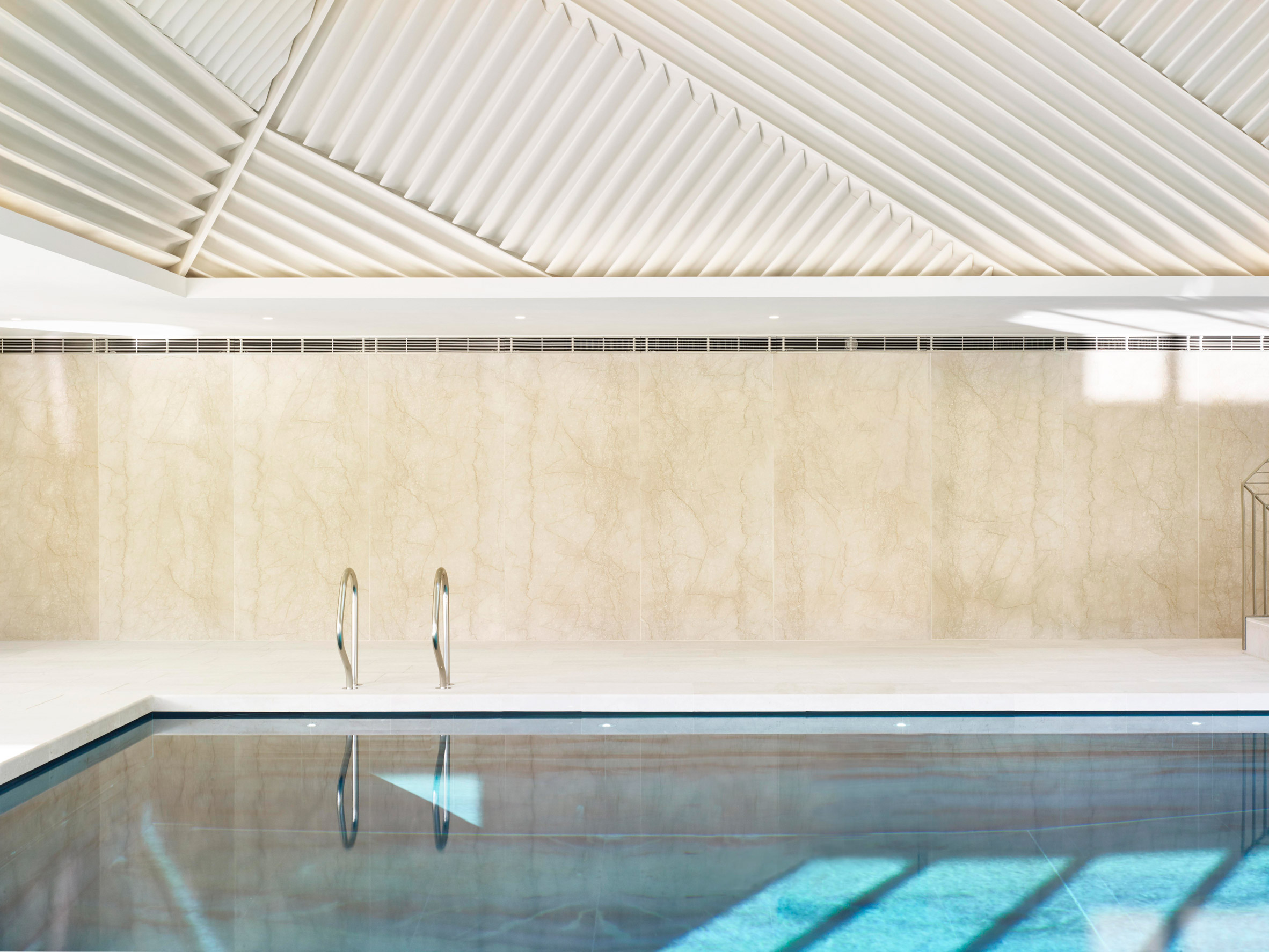 “The patterning of the fibreglass ceiling mainly serves a practical, acoustical function to dampen the sound and rein in reverberation,” the architect told Dezeen.

“But we worked diligently to make it a decorative feature as well, through its profile and illumination.”

A set of sliding doors along one side of the building opens onto a formal garden and adds to the bright feel of the interior, while the hot tub is situated in its own rounded structure lined with a series of curved windows and topped with a cupola-like skylight. 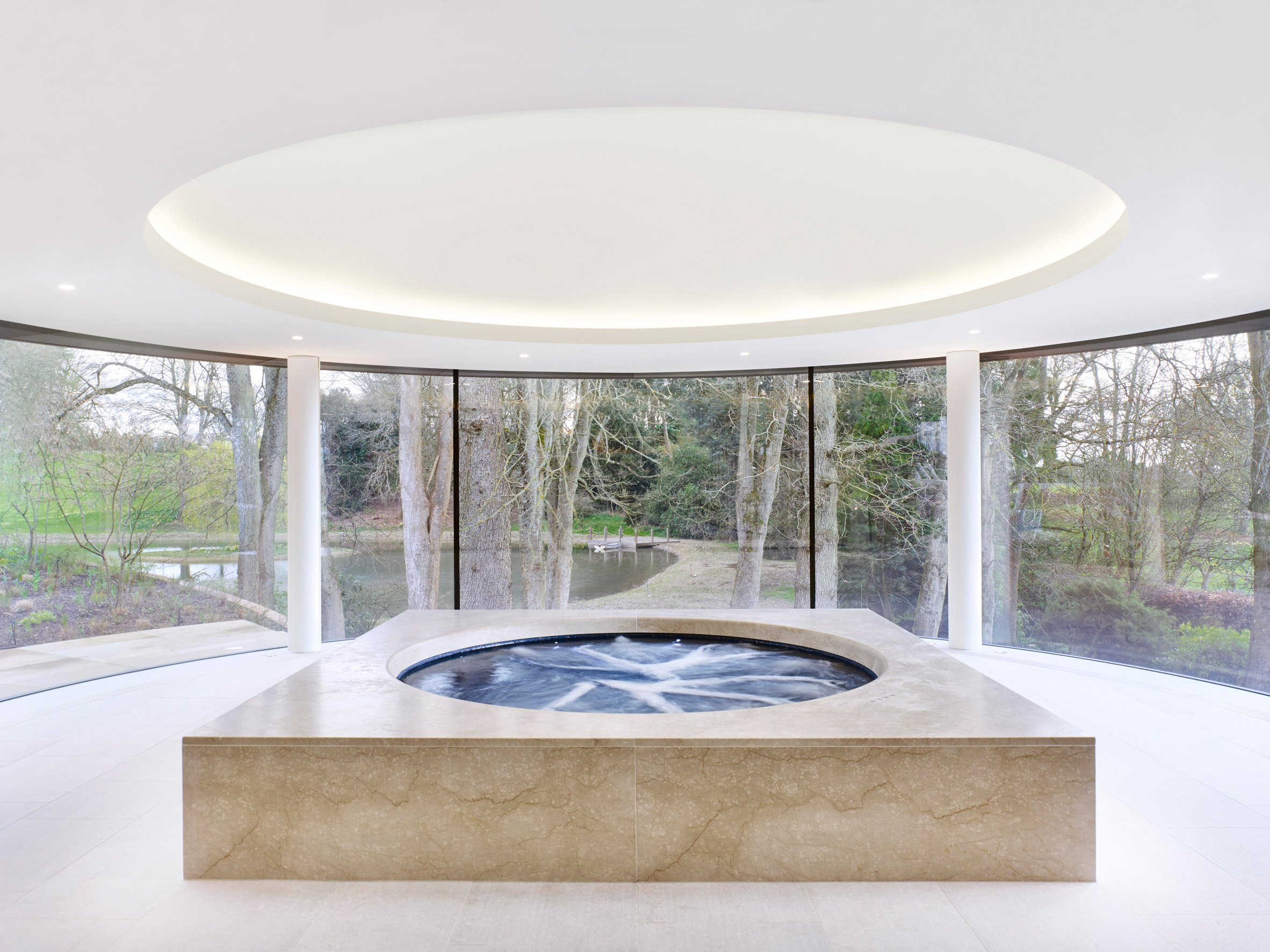 The clients have two children and stated in the brief that a slide should be incorporated into the design. The architects chose to install a pair of symmetrical slides that the children can race down.

“Slides are typically an additive eyesore and usually purely an expression of their function,” de Cárdenas added, “but here we wanted to make them an architectural feature.”

“They are dual slides in part for symmetry’s sake, but also to allow for play. They are located as they are so as to mesh with the horizontal flow of the pool with minimal interruption.”

The two slides are constructed from fibreglass with a hand-applied resin finish and are positioned below a triangular window overlooking a vegetable garden. 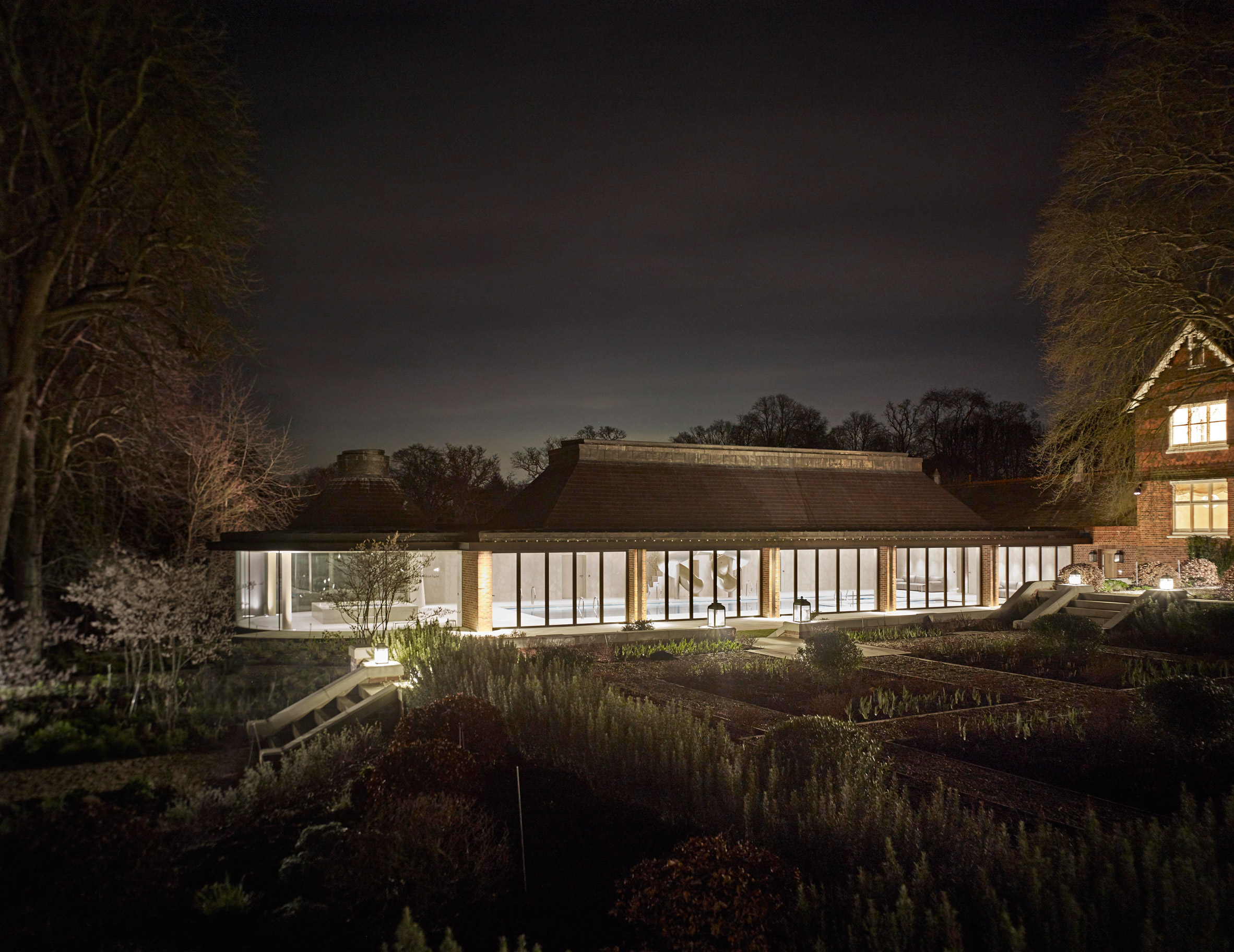 Walls and floors around the pool are made from Botticino marble, which was treated with an anti-slip rullato finish on the floors.

All images are taken from a recent monograph published by Rizzoli that details projects from the studio’s past ten years, spanning commercial and residential interiors, art objects and furniture, and pop-ups.

These previous works include the conversion of a 19th-century New York firehouse into an office space for young technology companies, and an installation produced for Miami Design District that combined neon lighting, patterned floors and tropical plants. 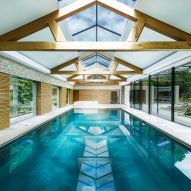