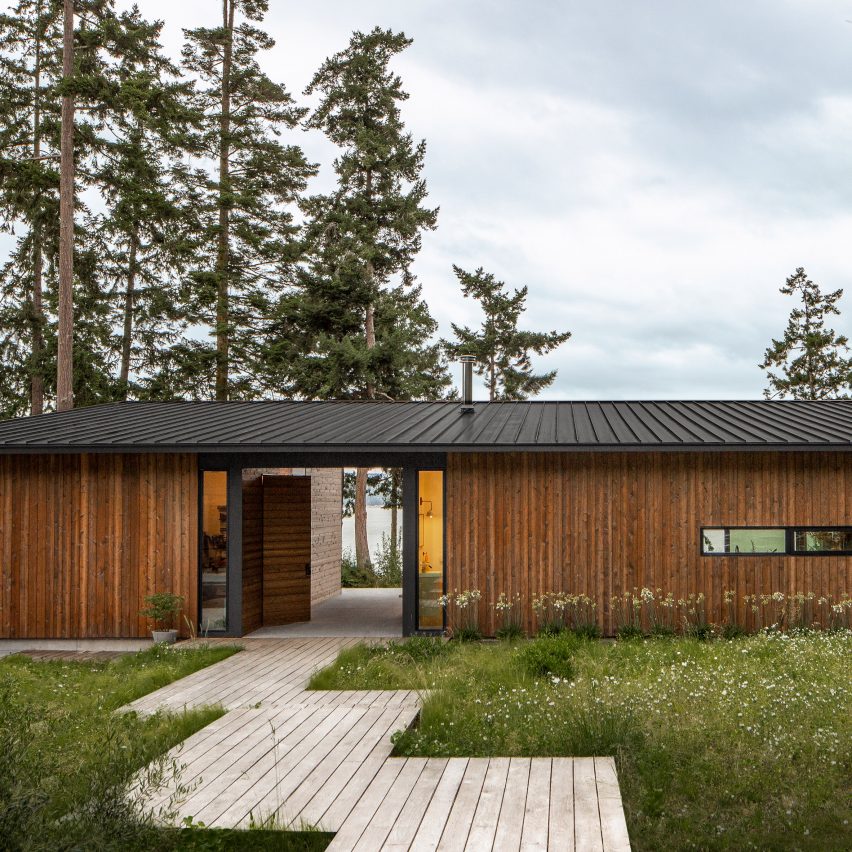 Cedar siding and a central breezeway feature in this compact home in the Pacific Northwest designed by US firm SHED for a couple who will soon retire.

The project, called Whidbey Dogtrot, is named after its location on Whidbey Island, which lies just north of Seattle. The single-storey dwelling is perched on a bluff overlooking the Puget Sound.

The project was designed by Seattle’s SHED Architecture and Design for a couple who are transitioning into retirement. They desired a compact, low-maintenance home that embraces its picturesque setting.

“In addition, the home needed space for guests, visits from adult children, hobbies, music and a home office,” the team said.

For inspiration, the architects looked to the dogtrot-style house, which features a central breezeway covered by a roof.

They conceived a low-lying home made up of two rectangular volumes flanking an open-ended passage, where the front door and a wooden bench are located. The building is topped with a black, standing-seam metal roof.

To ensure privacy, the team limited the amount of apertures on the front elevation, which faces west. The home opens up on the east, where large stretches of glass offer sweeping views of the landscape. 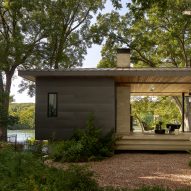 One side of the house contains the primary living quarters, which total 915 square feet (85 square metres). This area encompasses an open space for cooking, dining and lounging, along with a bedroom suite and reading nook.

The other side holds a 281-square-foot (26-square-metre) flex space and bathroom.

Throughout the dwelling, the team incorporated neutral colours and contemporary decor. Interior finishes include pale wooden cabinetry, creamy white walls and concrete flooring. Heat is provided by a hydronic system.

“The home is thoughtfully designed to make the most of its square footage,” the architects said. “The result is a modest and functional dwelling strongly anchored to its site.”

Other projects by SHED include a sustainable Seattle home that was influenced by circus tents and Japanese design, and the conversion of a horse stable into a studio and guesthouse.

The photography is by Rafael Soldi.