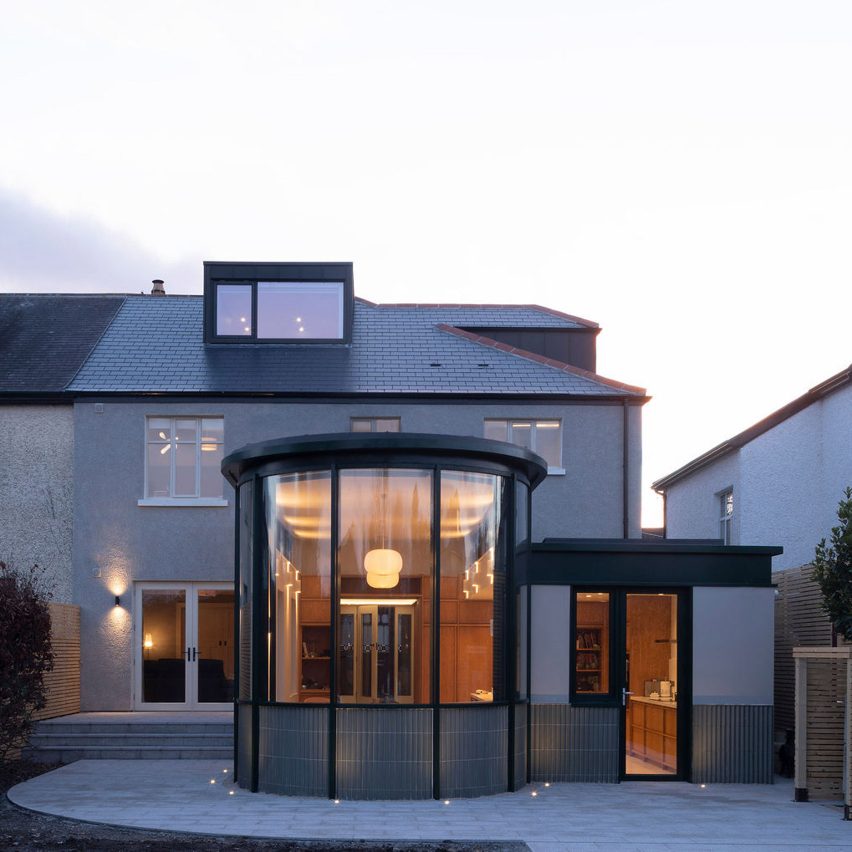 Scullion Architects has added a curved-glass extension that references Victorian conservatories as part of its renovation of a 1930s semi-detached house in the suburbs of Dublin.

The two-storey home was updated with the glass extension, designed to be a continuation of the home, and renovated with a repositioned kitchen diner that reflected the client’s request for a family-focused space.

Named Churchtown, the extension was informed by Victorian glass conservatories and shop fronts, which the architects hoped would add a lightness to the previously dark home.

The curved-glass design overlooks the garden and is framed by forest-green metalwork and hardware to add a “delicacy” and reflect the 1930s joinery on the facade’s fascias and bay windows.

“The intended atmosphere of the new room is certainly influenced by the great Victorian glasshouses and sun parlours of Richard Turner; and the curved glass form does echo that as well,” Scullion Architects director Declan Scullion told Dezeen.

“Unlike the Victorian glasshouse, however, the glass itself is curved. This was born out of wanting to achieve that wonderful liquid-like quality that glass achieves when curved, like on a Victorian shop front, which also feels quite luxurious.”

The building’s original layout positioned the kitchen in a dark corner of the home, with windows that looked onto a passageway that lead to the garden.

Scullion Architects transformed the kitchen into the heart of the home by implementing an open-plan kitchen diner that maximises light through large openings and clerestory windows.

The studio worked with materials typically found in homes of the early 1930s and adapted their use in ways that would be unconventional during the period.

“We looked at early 1930s modernism, like the Tugendhat House, as a peripheral influence on form and material selection,” said Scullion.

White terrazzo covers work surfaces, floors and is used as a splash-back in the kitchen diner.

Stained oak-panelled cabinetry runs through the kitchen to conceal appliances and a pantry.

The wood and terrazzo palette that was used for the kitchen extends to a lobby area containing a bar, utility space, and glass doors that lead to the main entrance hall.

The entrance hall was updated with oak herringbone floors, and walls fitted with wainscoting add to the neutral, earthy palette.

“We wanted the visitor and owners to feel a change in tone and lightness as they moved from the main house towards the new extension – hence its lighter, more conservatory-like atmosphere that befits its garden setting,” said Scullion.

Scullion Architects is a Dublin-based studio, founded by Declan Scullion in 2016.

The studio has previously completed a home extension that folds around a courtyard and designed a glazed sunroom with a copper parapet.

Photography is by Fionn McCann.