Japanese studio FujiwaraMuro Architects has completed an exceptionally narrow timber house in Kobe, featuring an atrium that allows daylight to reach each of its levels.

The site FujiwaraMuro Architects was given to work with was just 22 square metres, and flanked on either side by existing residential buildings. The studio had experience of dealing with the restricted sites common in many Japanese cities, having previously fitted a three-and-a-half-metre-wide house fronted by metal curtains onto a plot in Osaka.

They initially thought the site would be too small to build on successfully, but they ultimately treated the constraints as a challenge. 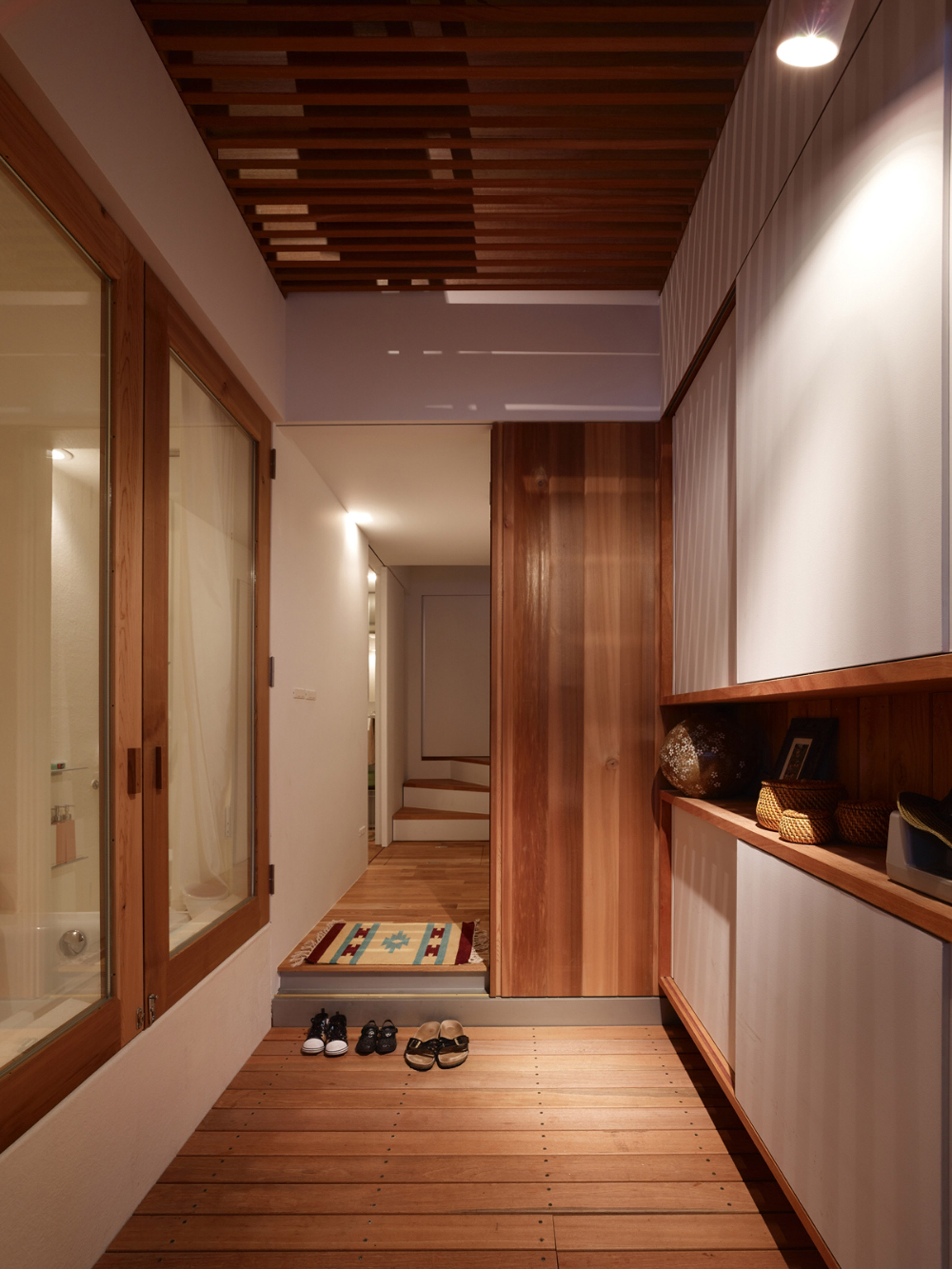 The building is set back from the street, with a large opening on the ground floor forming a garage, and the main entrance set into the rear wall.

The entire street facade is clad in boards of knotted timber, interrupted only by three windows of varying dimensions set at different heights to frame views of the city and surrounding hills. 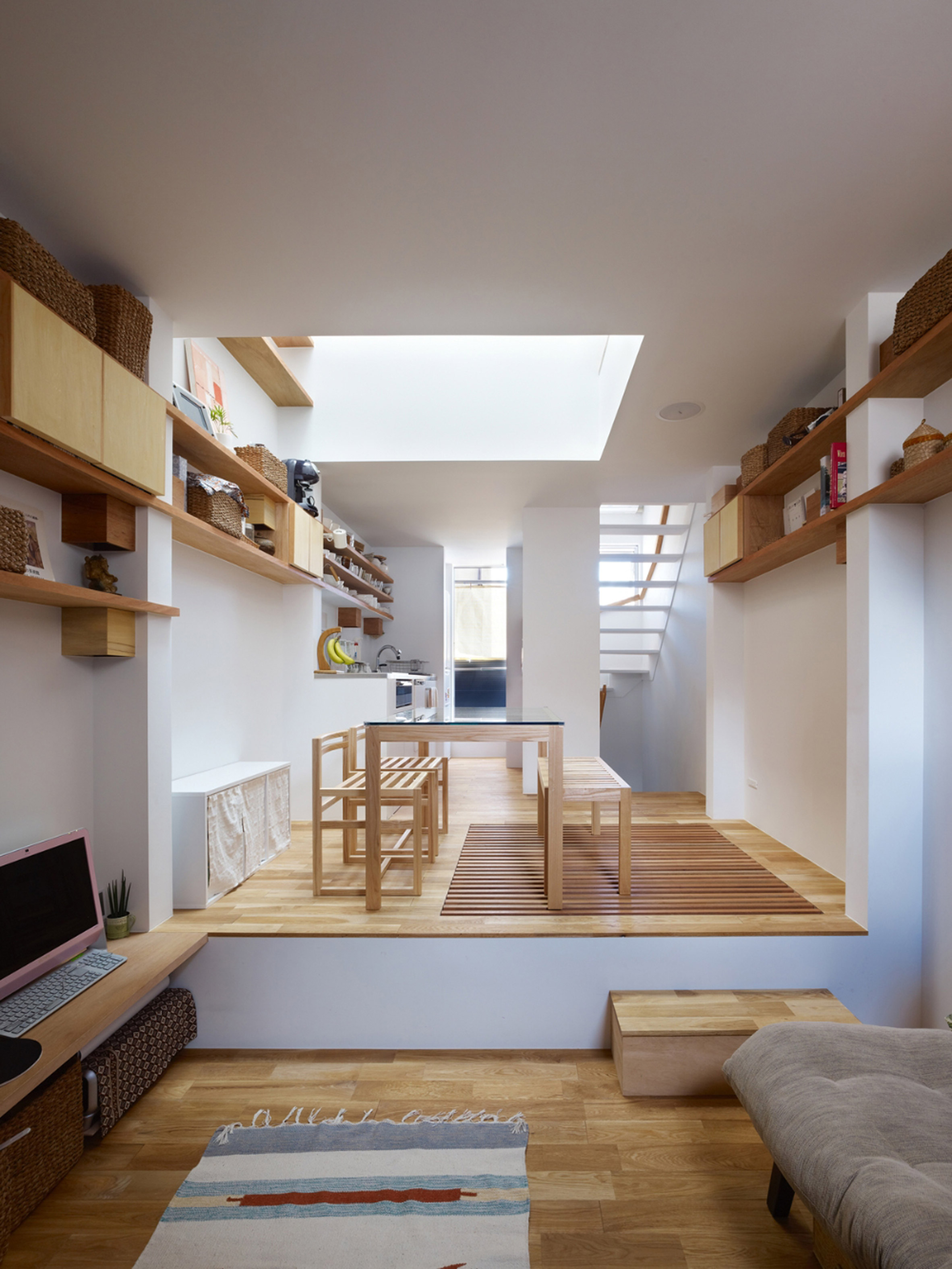 The entrance leads into a hallway lined with storage on one side, and a bath and shower room on the other. A toilet is also accommodated on this level, with a staircase at the far end ascending to the upper floors. 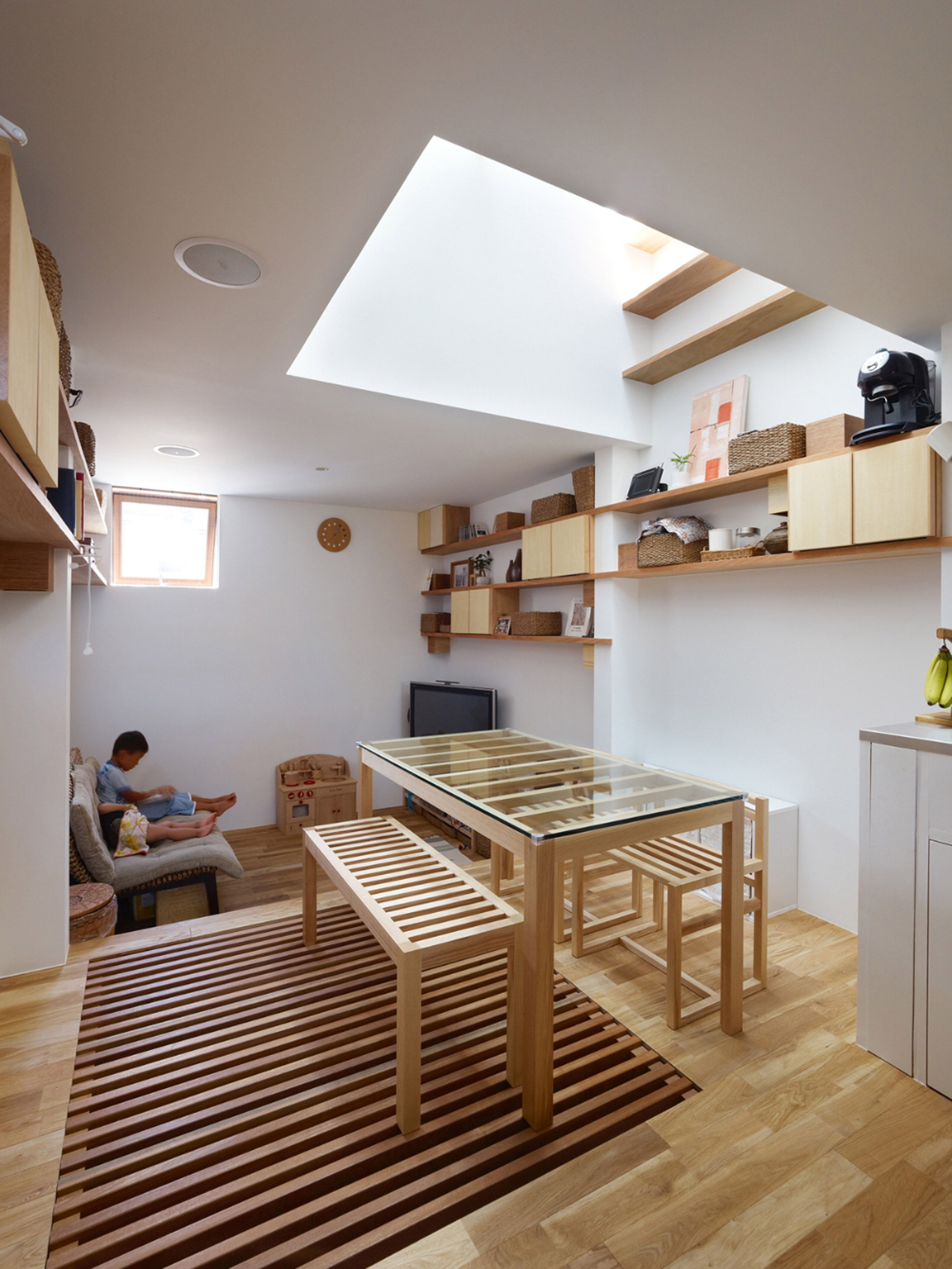 On the first floor, a kitchen and dining area is connected to a sunken living room by a single step. Each space in the house is linked to the others by openings or windows to create areas with adjustable levels of privacy.

“When many people are in the house, their relationships grow closer,” said FujiwaraMuro Architects. “Even when only one or two people are there, they feel calm rather than lonely in the space.” 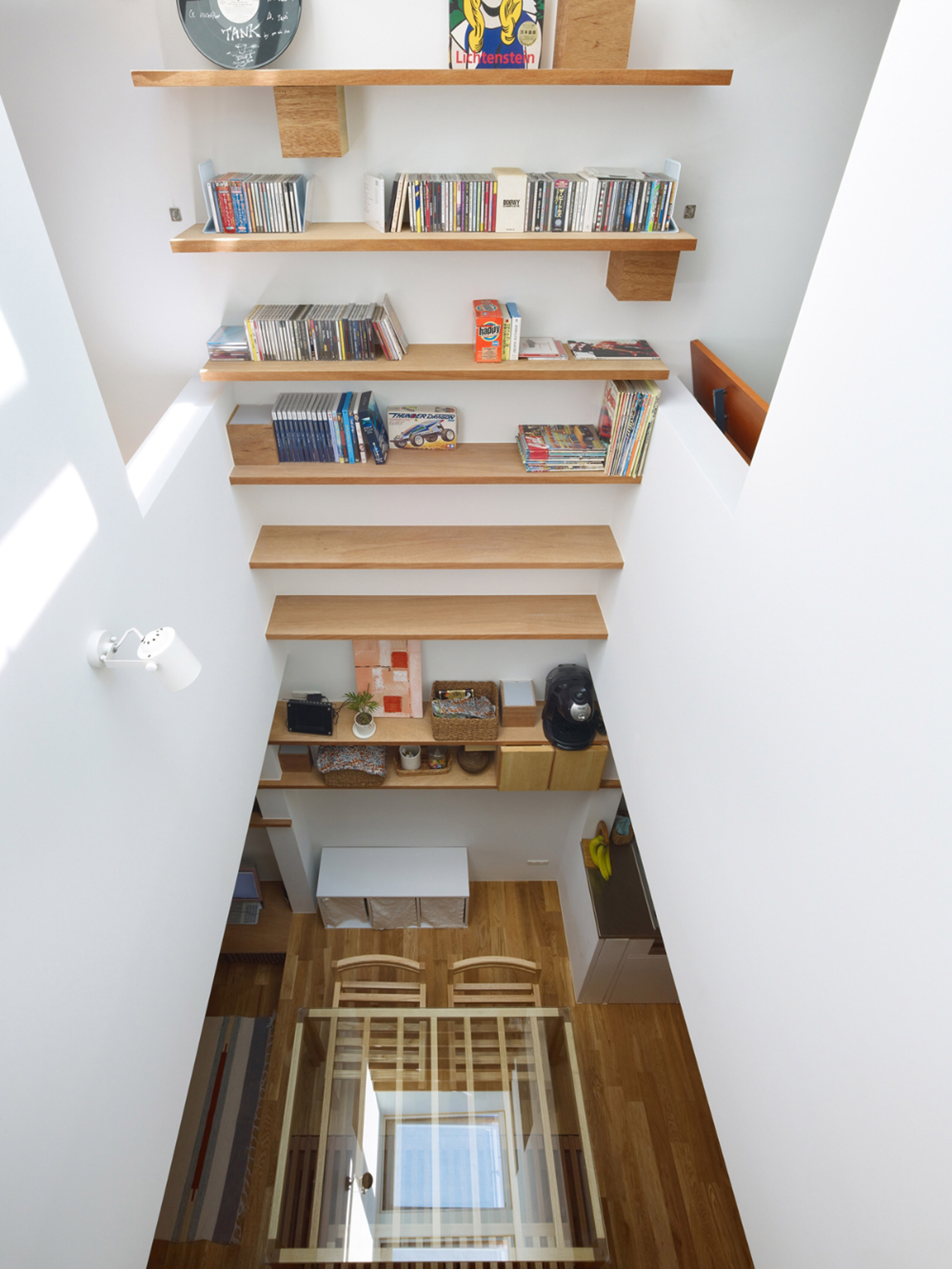 Large windows at the rear of the kitchen brighten the interior and open onto a small balcony. Light also streams down into the heart of the home from a pair of rectangular roof lights. 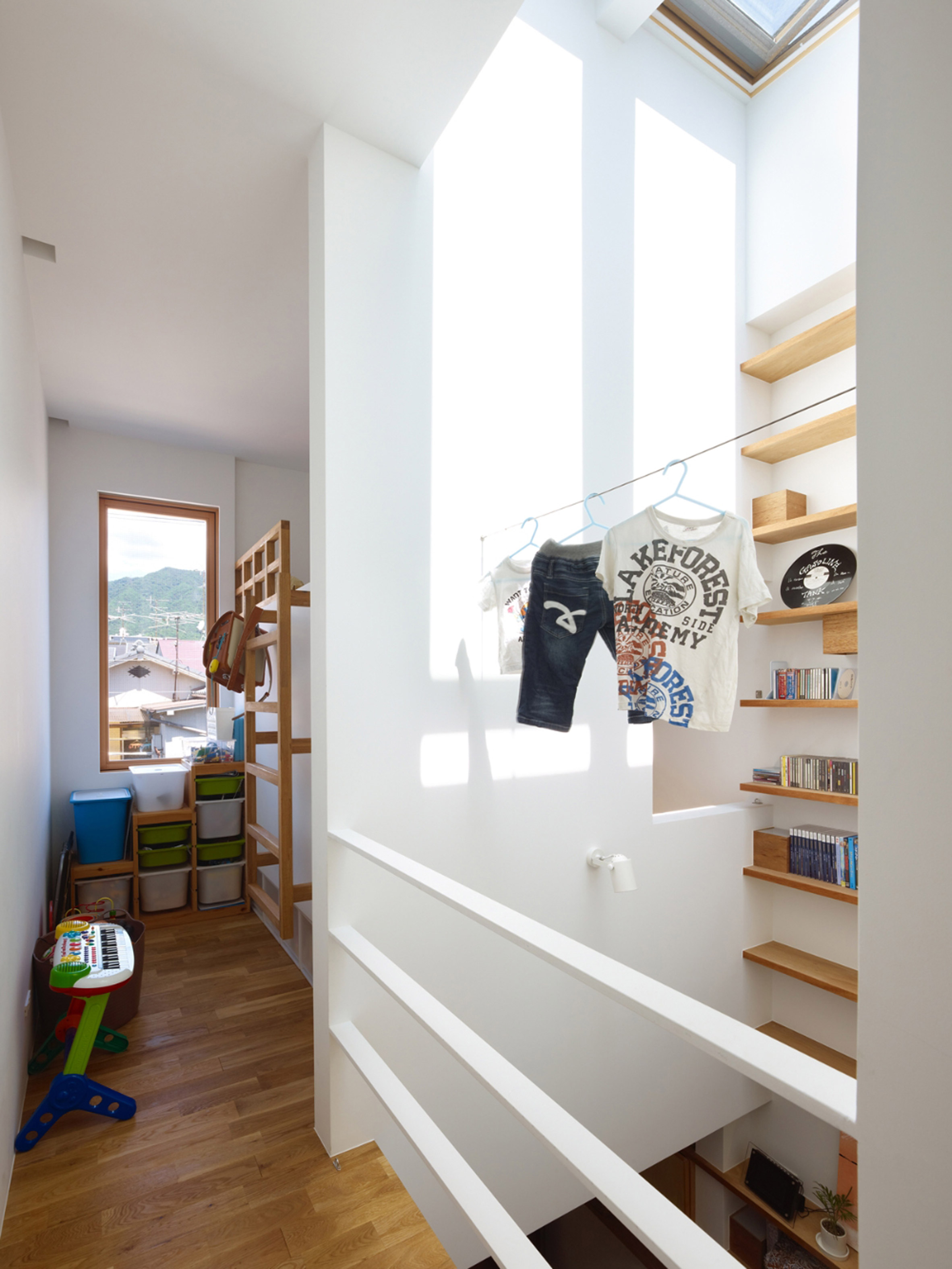 The floor of the dining space features a slatted wooden surface that enables the natural illumination to filter down to the lower level. For the same reason, a dining table with a glass top was specified to sit above the slatted floor.

Shelving that extends across the walls of the living and dining areas also reaches up through the void to the upper level accommodating the bedrooms. The main bedroom is located at the top of the stairs and can be closed off from the rest of the space using a curtain.

A child’s room that occupies the area on the other side of the void is visually connected to the parents’ room and the living space below by a pair of opposing openings. FujiwaraMuro Architects has also worked on projects with more generous sites, including a family home in Kyoto lined with huge vertical louvres, and a house in Sayo featuring boxy wooden rooms that branch out from a crooked blue spine.

Photography is by Toshiyuki Yano.