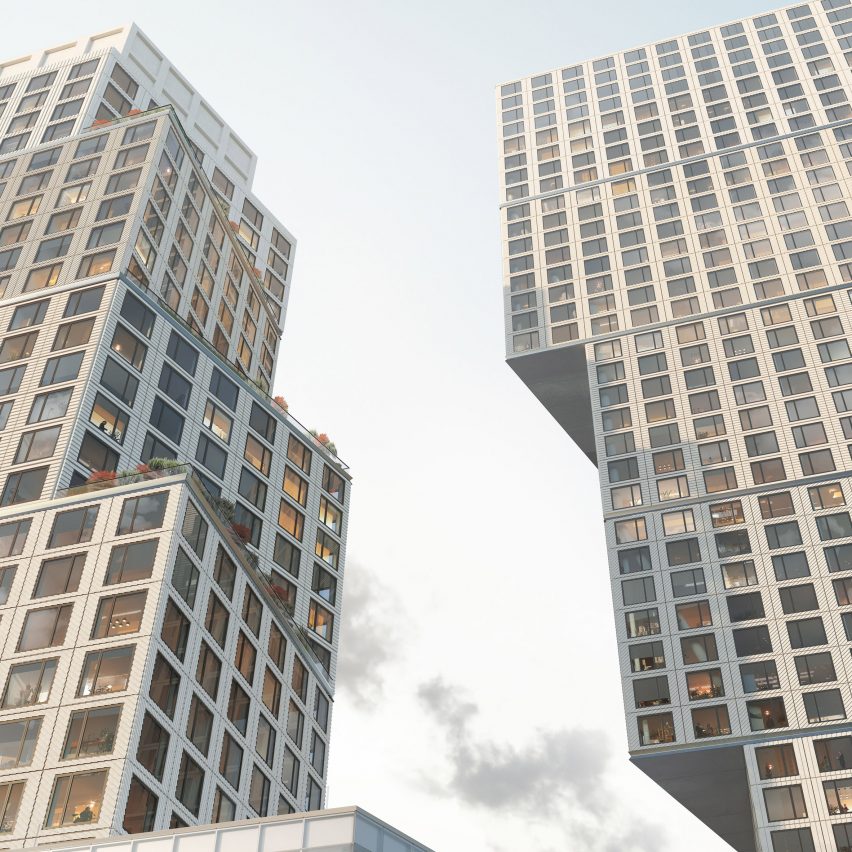 A skyscraper and a tower designed by architect Jason Long and architecture firm OMA have topped out in the Greenpoint neighbourhood of Brooklyn, New York.

Brookfield Properties is developing the project as part of Greenpoint Landing, a waterfront development master-planned by the Park Tower Group.

The stepped residential buildings are designed to look as if a single building has been torn apart and the two halves placed next to each other.

The gap between the two buildings frames views of the Manhattan skyline across the East River.

Both towers are formed of gridded concrete panels inset with square windows that measure eight by eight feet (2.4 metres). The precast concrete panels are angled slightly, to mimic the shingles of nearby townhouses.

A total of 745 residential units will be split between the 40- and 30-storey towers in Greenpoint – a Brooklyn neighbourhood just north of Williamsburg.

“These towers, our first in Brooklyn, have reached an important milestone made possible by the perseverance of Brookfield, Park Tower Group, BBB and the entire construction and design team during an unprecedented time,” said Long.

These housing complexes will be mixed-income, meaning 224 – or 30 per cent – of the units will be offered at affordable prices and the rest at market rate. In New York, affordable is defined as costing around a third of the median income for a family living in the city.

Greenpoint Landing encompasses a plan to develop a 22-acres waterfront site by building 5,500 residential units, along with a school and parks. Of these units, 1,400 will be affordable.

The first Greenpoint Landing building, One Blue Slip, opened in 2018 followed by Two Blue Slip in 2020. Both were designed by New York-based practice Gachot Studios. Four more towers are also under construction.

More skyscrapers recently topped out in New York include The Spiral by BIG and 50 Hudson Yards by Foster + Partners.