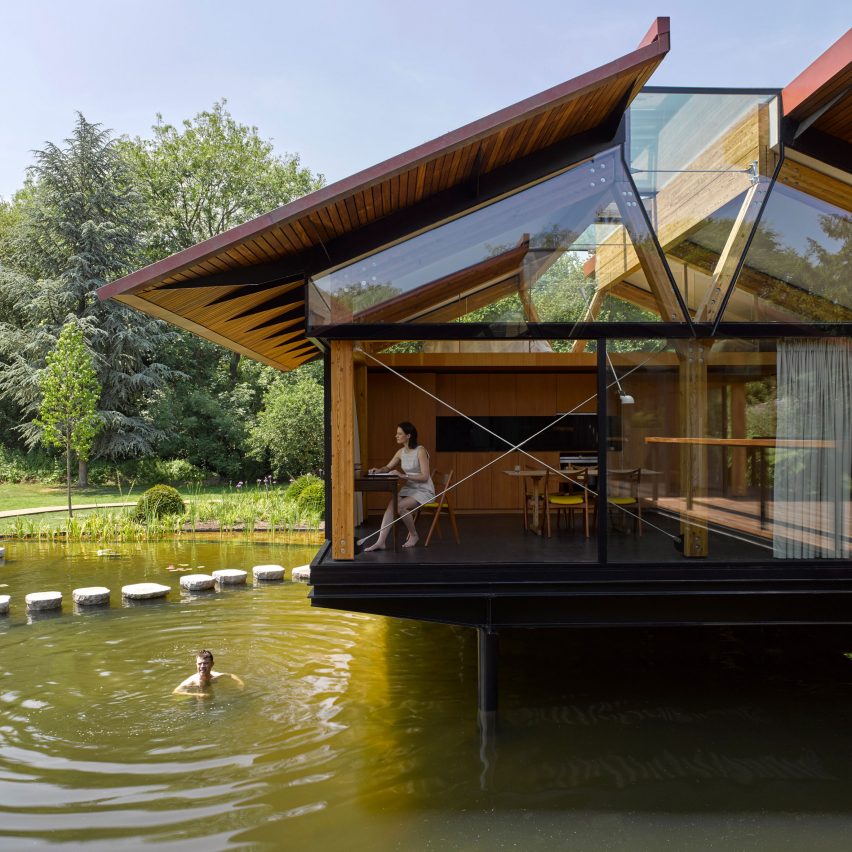 Architecture studio Hamish & Lyons has completed Stepping Stone House, an extension to a manor house in Berkshire, England, that is raised on stilts above a lake. 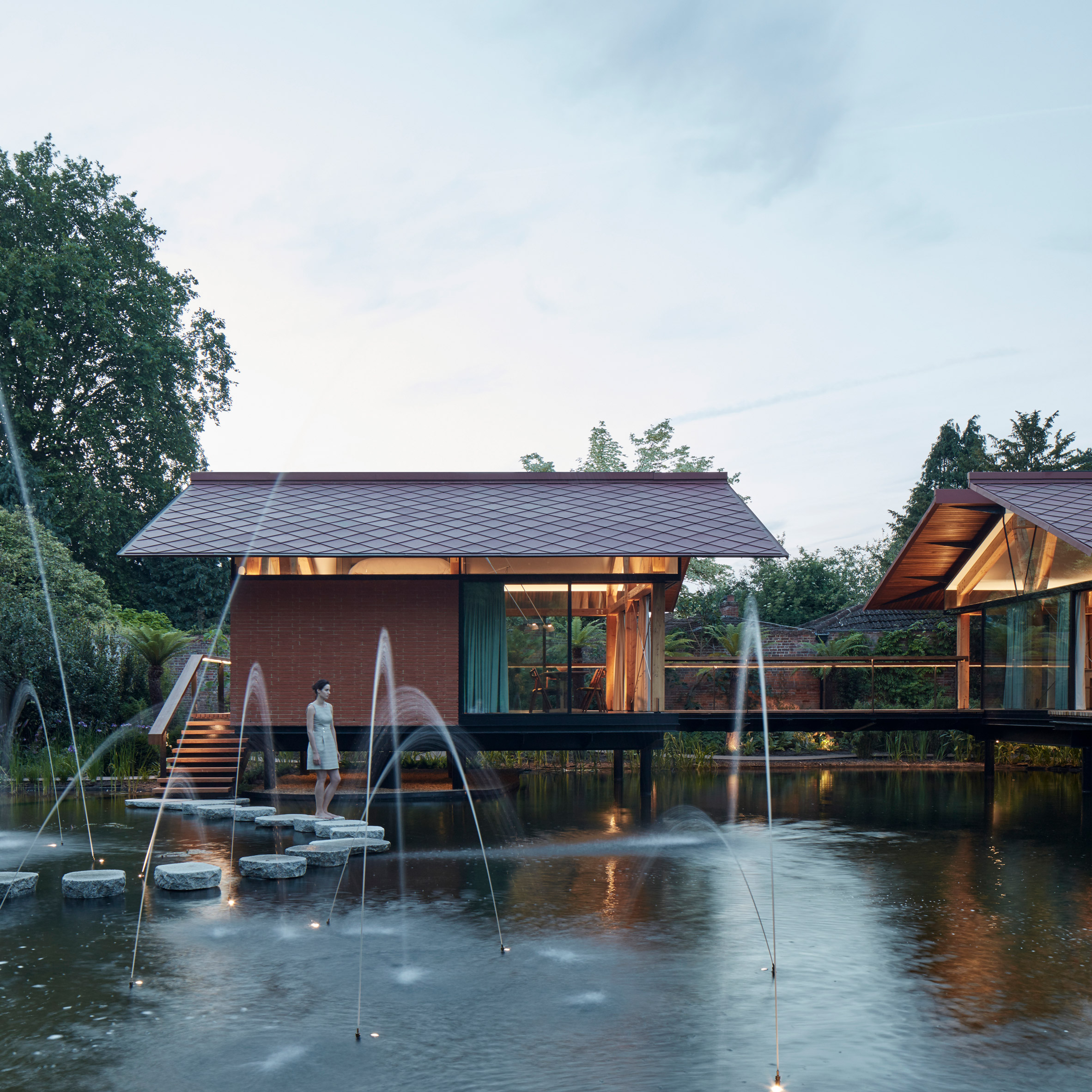 Three of the children live with attention deficit hyperactivity disorder (ADHD) – a behavioural disorder that can make you hyperactive – so the extension’s design is intended to provide a soothing space filled with daylight and natural materials that immerse the occupants in nature.

The larger of the two buildings provides the family with a new living space connected to the existing house’s ground floor by a structural glass bridge. 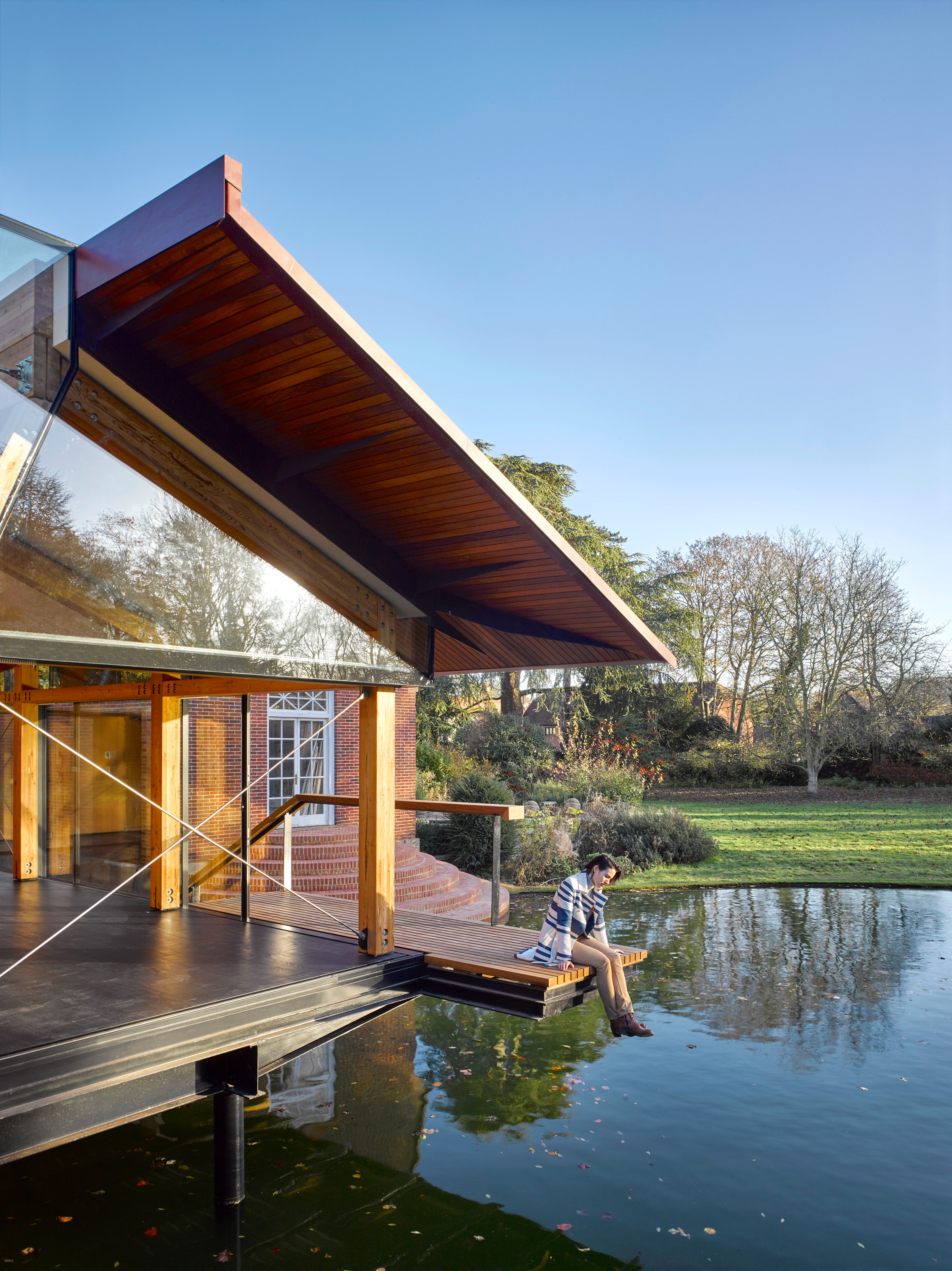 The smaller structure accommodates a self-contained guest house with a kitchen and living space, utility corridor, bathroom and a bed tucked in beneath the pitched ceiling.

Stepping Stone House is raised above the lake on steel pillars, which protects them from flood waters and makes it possible to swim underneath them. 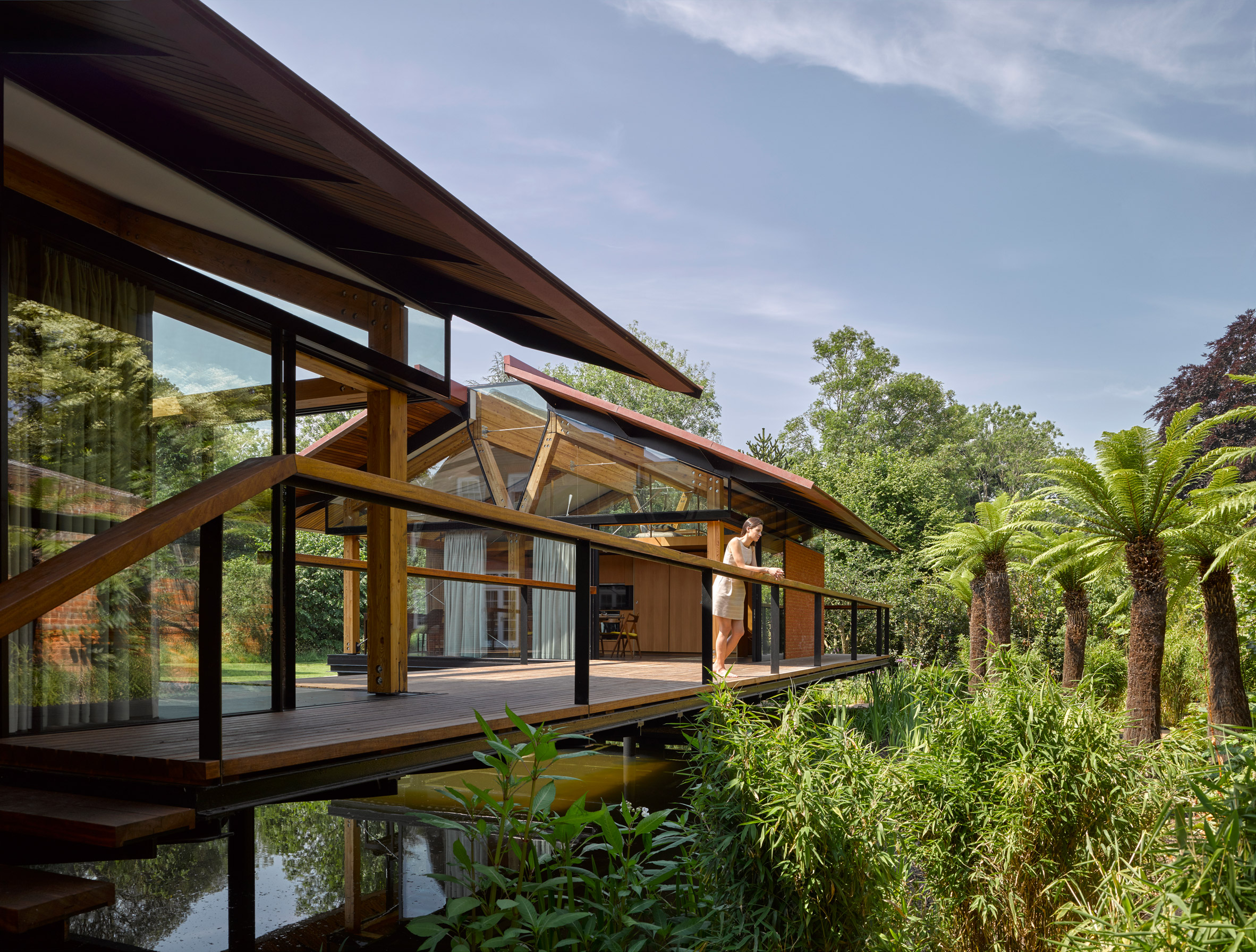 “The minimal steel structure was designed to give the impression of the building floating over water,” the architects suggested.

“Light bouncing off the water reveals the building’s undercroft, where the black steel ribs are highlighted against the white corrugated floor deck.” 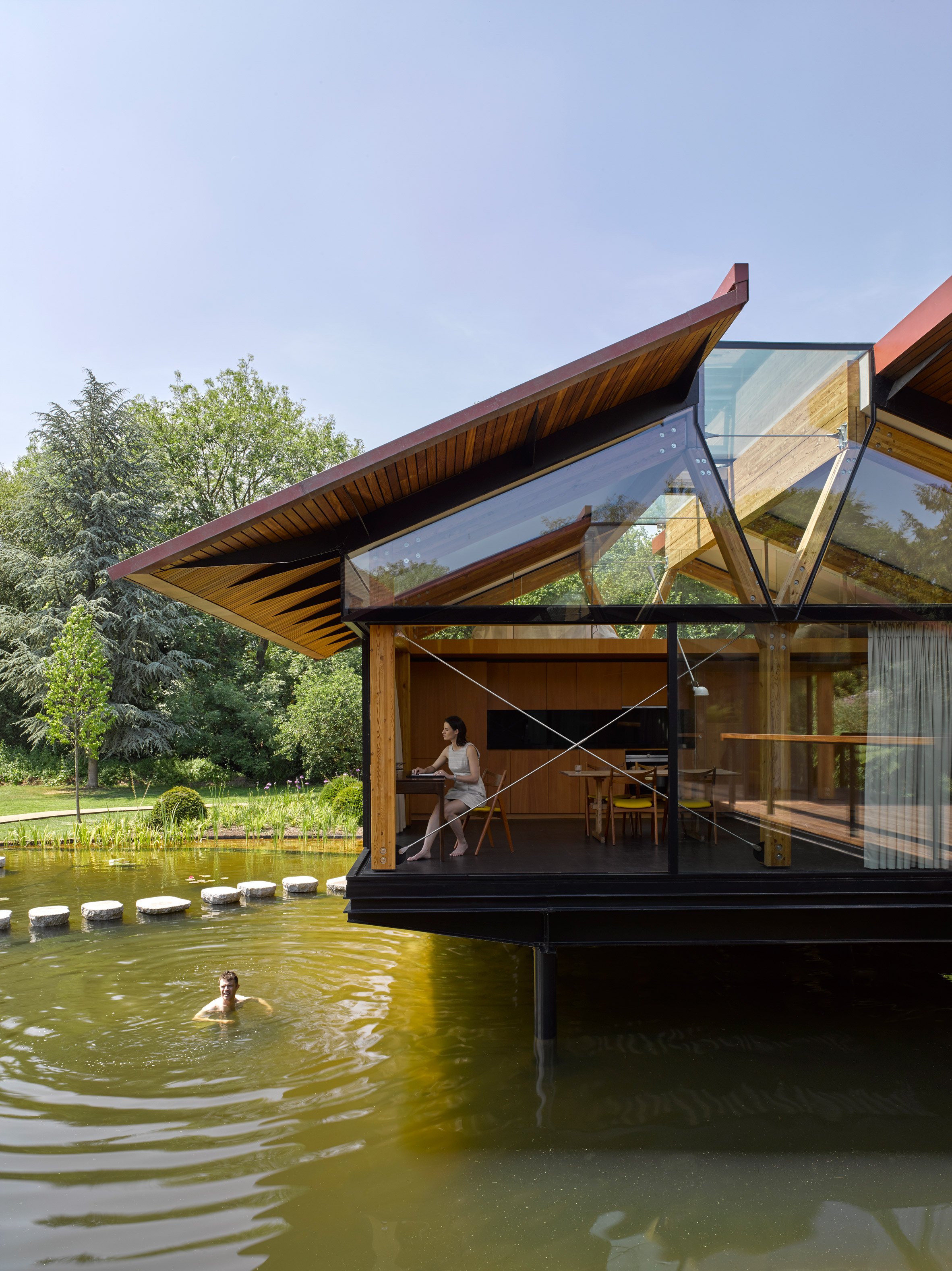 Both structures are topped with sloping roofs featuring exaggerated eaves that shade the interiors from direct sunlight and provide a sheltered walkway connected to the living areas.

The roofs are supported by Y-shaped columns made from glue-laminated timber that was chosen for its precise and stable properties, and to add to the warmth of the Douglas fir panelling used throughout the interiors. 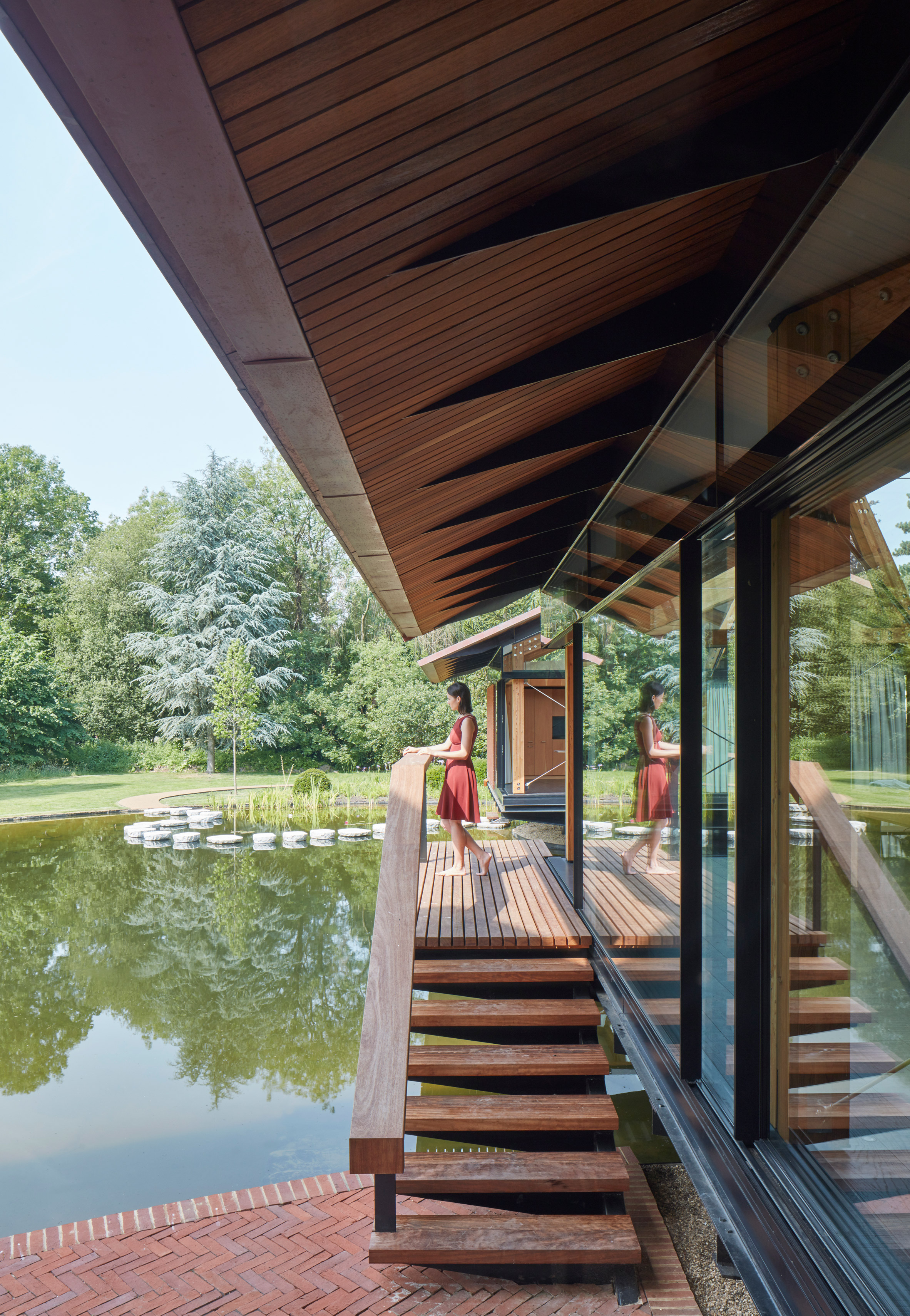 The tops of the supporting pillars separate to create space for skylights that extend the full length of both buildings and offer a view of the sky from inside.

Tapered steel fins that cantilever out from the Glulam structure to support the eaves echo the exposed steel frame at floor level. The soffits are clad in hardwood that introduces a further natural element to the interiors, and the roofs are topped with copper shingles. 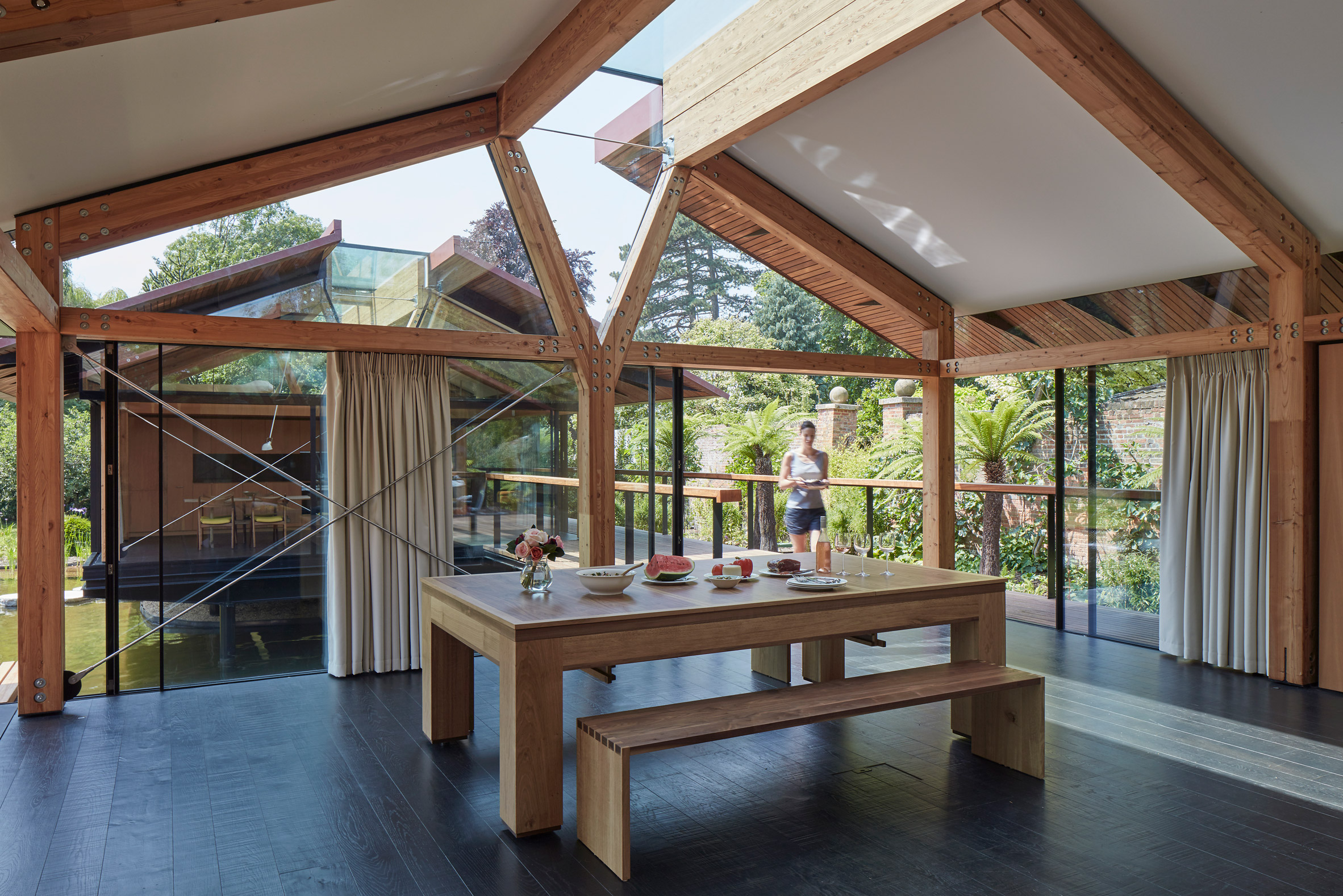 “The malleable copper allowed a bespoke edge detail to be formed to give the roof eaves a blade-like sharpness.” 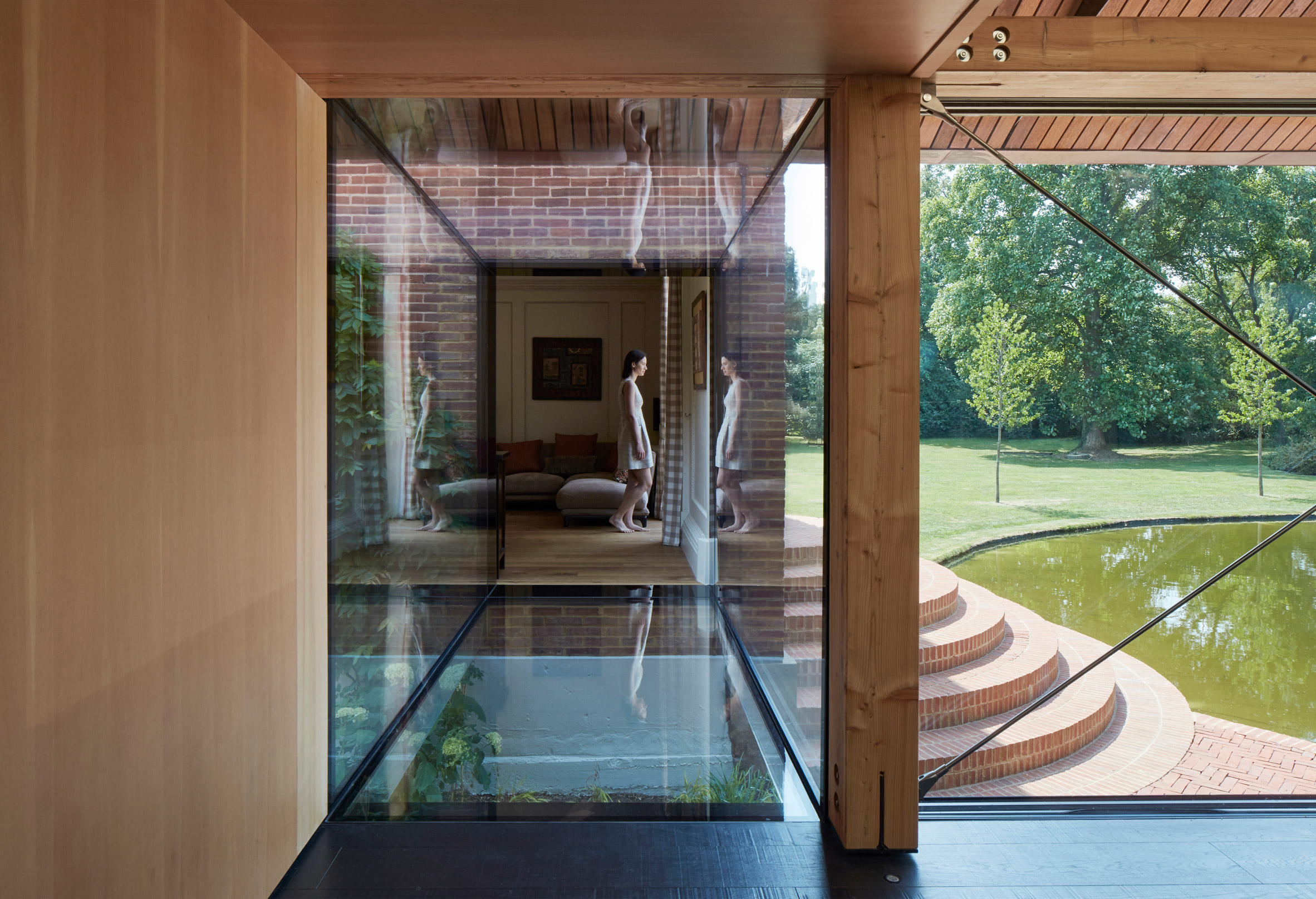 Glass walls that wrap around Stepping Stone House incorporate sliding sections so the interiors can be opened up to the fresh air. The remaining surfaces are clad in brick to reference the existing house.

Hamish & Lyons also worked on the landscaping, which includes the swimming lake and a circular route that leads from a parking area through a garden of tree ferns towards the water. 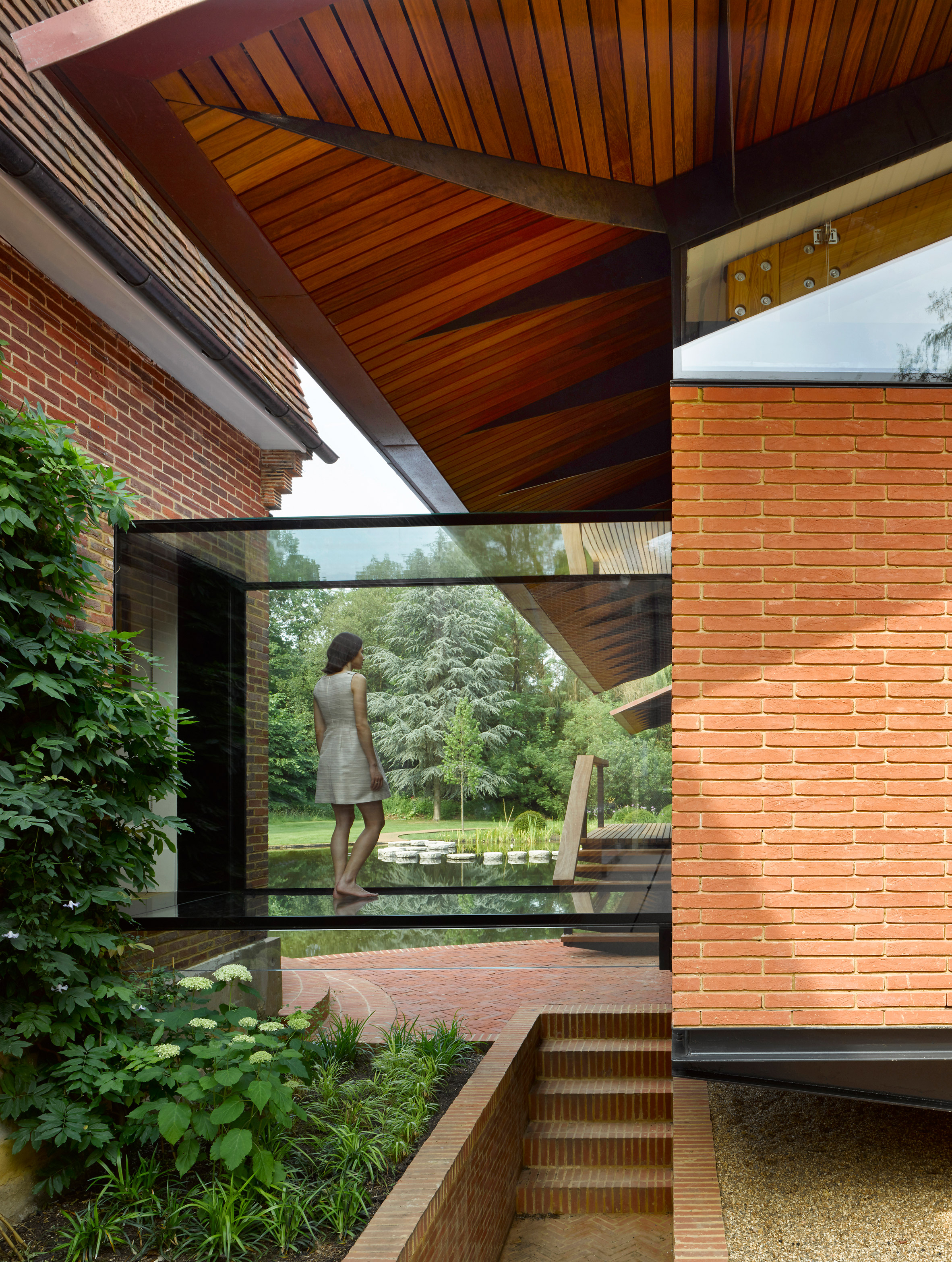 Stepping stones lead to a staircase and elevated wooden walkway that connects the two buildings via a bridge.

A cantilevered diving platform extends from the southern side of the main living space, with a further set of steps leading down to a brick terrace at the water’s edge. 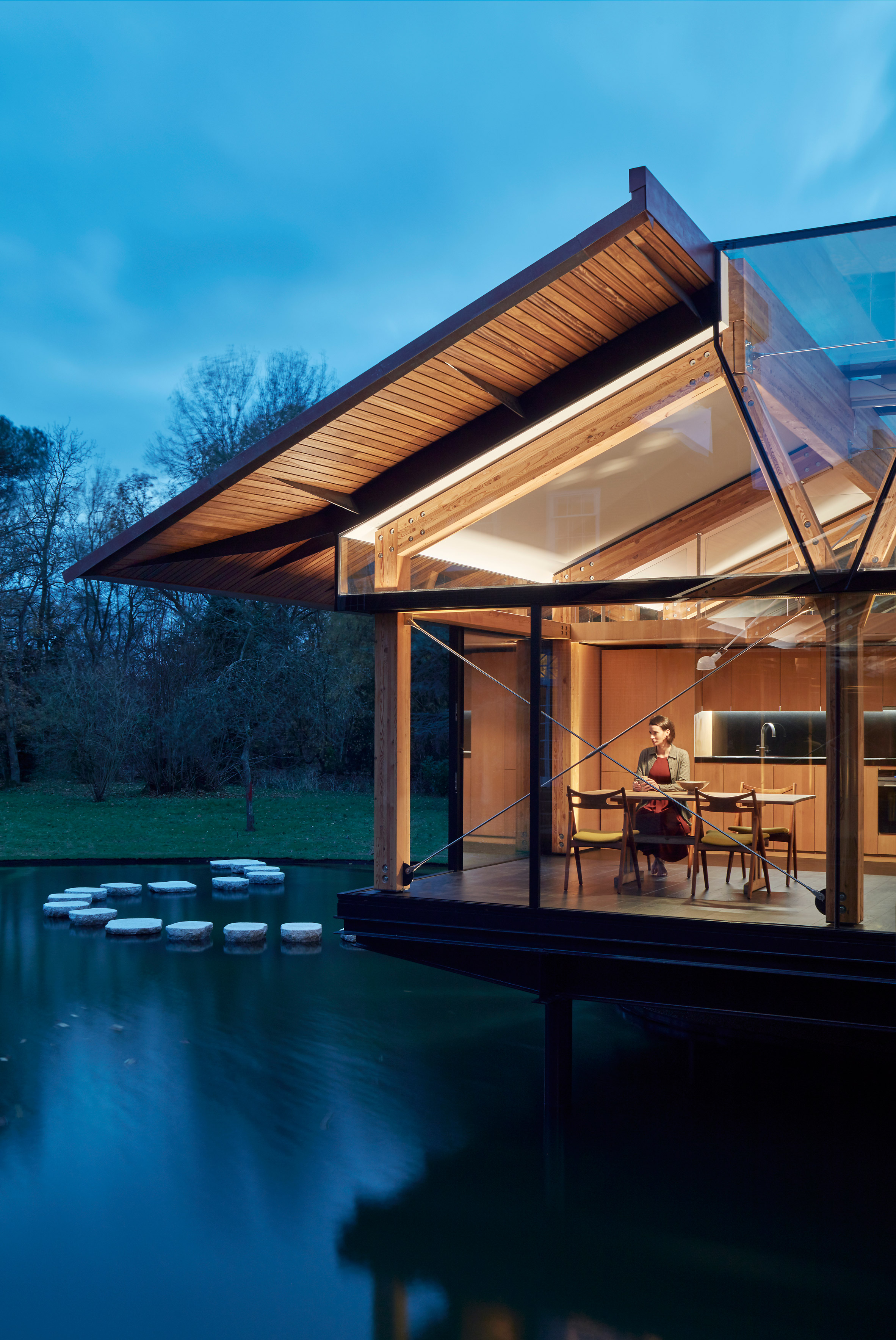 The architects designed the building as a modular system that was prefabricated and allowed for improved efficiency of construction.

They also claimed that the system could be used to produce similar buildings in a variety of different contexts or locations.

Placing buildings on stilts allows architects to bring buildings closer to nature. Lund Hagem used stilts to anchor a summer house to a rocky shore in Norway, and White Arkitekter built a bathhouse on columns rising from the sea in Sweden.

Photography is by James Brittain. Film is by Will Scott.

The post Stepping stones lead into house extension over an English lake by Hamish & Lyons appeared first on Dezeen.