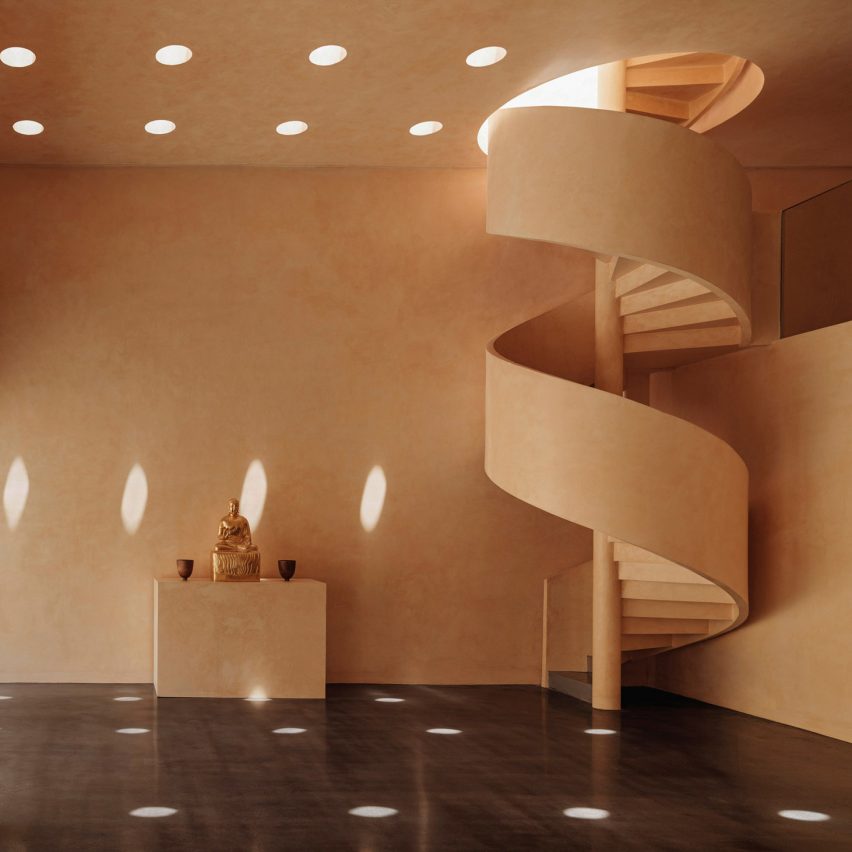 Shanghai-based studio Team BLDG has turned the bathhouse of a former aluminium factory in Xiamen City into an art gallery and studio called The Field for an artist who creates Buddha statues.

Team BLDG redesigned the bathhouse of the old aluminium factory, which was converted into a creative office park in 2019, from the inside out to create a series of toplit spaces for artist Jiang Sheng.

“Based on the architectural concept of ‘the residence of Buddha’, we renovated the building from the inside out,” architect Xiao Lei told Dezeen.

“For the facade, we blocked up all the south side windows facing the main street, to make the new facade, resulting in three blocks arranged south to north that shape a rhythmic stepped form.”

“The magnolia tree at the east side can be a landmark of the renovated building, and guide visitors inside,” Lei added.

After rearranging and simplifying the building’s exterior, the studio had it hand-painted in the same sandalwood yellow as the interior – a colour that is also traditionally associated with Buddhism.

The studio wanted to create a “hidden and invisible architecture” that would work as an intermedium to showcase the Buddha statues and contain the essence of Buddhism. The large magnolia tree outside the building also influenced the design.

“To make the architecture hidden in the colourful and noisy creative office park district, and make the boundaries between the outside and inside disappear, we tried to simplify the exterior,” Lei said.

“We painted all the elevations with the same colour as the interior to make the new language calm down and as a background of the tree, the Buddha sculptures, and the light.”

Inside the gallery, Team BLDG turned the three blocks into three distinct spaces – a bright main hall, a more closed-off “dark” room, and an office.

The studio added multiple skylights to the spaces, a decision that was informed by its experience of previous projects in the city.

“We have done several projects in Xiamen since 2012, and we are very impressed by the strong sunlight in the city,” Lei said.

“The original building of the exhibition hall has four round skylights on top, and the effect of the light columns is very close to our initial expectation of the atmosphere, but we would like to see a more dense ‘light rain’ effect for the art pieces.”

“So by simulating in the models, we finally modified the four skylights into 28 round skylights with 300 millimetres in diameter, and added two square skylights in the dark room and one for the office staircase,” Lei added.

Which room the artist’s Buddha statues are placed in is decided by the light, with statues made from dense materials such as wood and stone set in the “bright” room where their shadows are constantly changing with the sunlight.

In the dark room, statues made from transparent materials, including glass and jade as displayed.

“Light means the source of wisdom in Buddhism,” Lei explained. “Both light and wisdom are originally intangible, but through the skylight light can be made tangible.”

“When light is introduced into The Field, another dimension is added to the space. As time passes, light and shadow flow silently, elaborating the artistic conception of ‘eternal’ and ‘constant’ together with Buddha statues settled here.”

Team BLDG also added a spiral staircase to the interior of the building, which leads to a roof terrace right next to the magnolia tree.

An outdoor staircase was constructed to connect two of the blocks, while thick elevator shaft walls were removed to create a lightwell lit by one of the new skylights.

“By simplifying the building’s form and concealing the details, we made the building more like a kind of background, as Yoshio Taniguchi said: ‘Architecture is basically a container of something. I hope they will enjoy not so much the teacup, but the tea,'” Lei said.

“Meanwhile we used the skylights to bring light inside the space, which can enhance divine and religious atmosphere, so the Buddha statues in the space became more prominent.”

The artist was pleased with the end result, Lei said. “He believes that our design is a design that follows nature.”

Photography is by Jonathan Leijonhufvud.