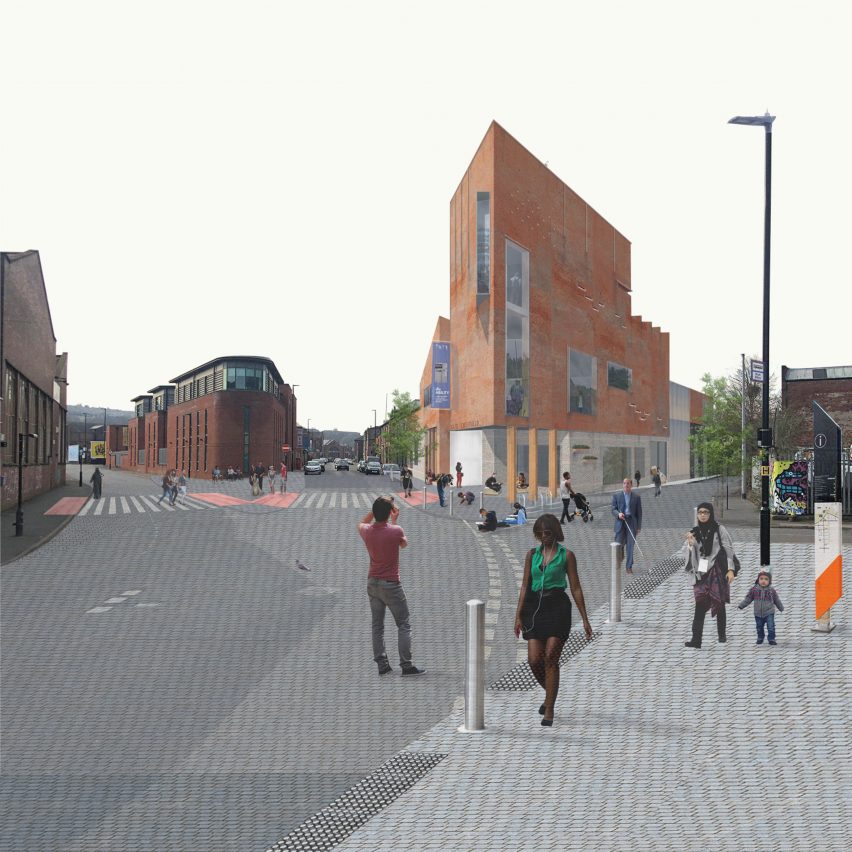 A low-carbon housing proposal and a design for a Tate museum in Sheffield feature in Dezeen’s latest school show from students at the University of Sheffield‘s School of Architecture.

Also included is an anti-racism call to action and a project that envisions a new model for rural living.

“The Sheffield School of Architecture is well known for its ethos of social conscience and sustainability.

“In the past year, these strengths have been evident throughout students’ work, both as architects and as campaigners.

“Our students have produced some truly exceptional work, both as designers and as members of a wider community. Here we present a selection of the exciting projects, designs and campaigns from our students.” 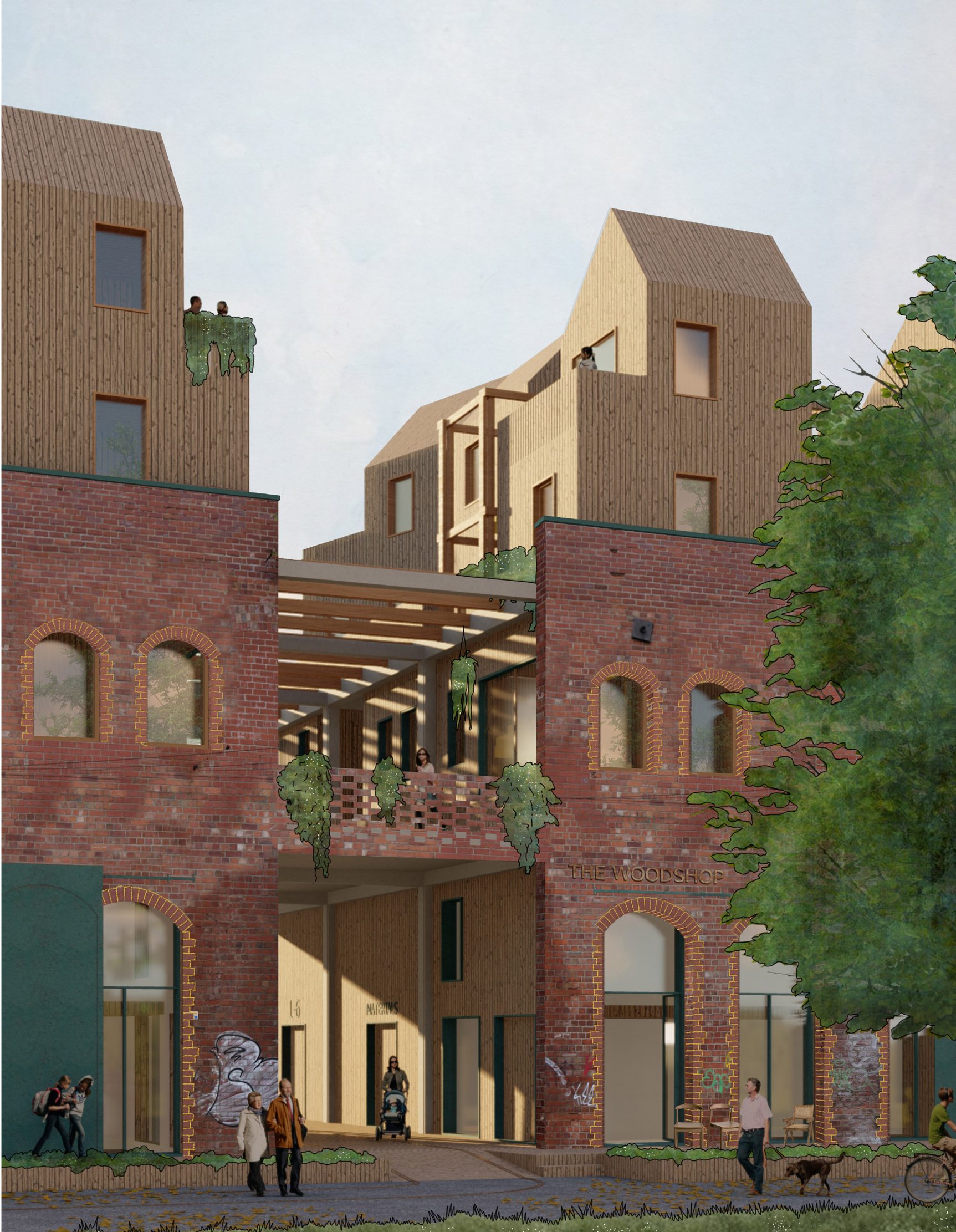 “The Neepsend Co-operative, set in Sheffield’s industrial Neepsend, integrates co-operative living with productive industry to explore the future of low-carbon housing in response to the climate emergency and housing crisis.

“Built on a derelict brewery, this thesis utilises the existing infrastructure to minimise embodied carbon and material use.

“The new architectural interventions including multigenerational micro-neighbourhoods, a co-operative hub and a fabrication laboratory add layers to the site’s rich history. This creates a hybridised structure of existing brickwork and locally-sourced timber.

“The project is a testbed for transforming derelict industrial sites while meeting Sheffield Council’s zero-carbon ambitions.” 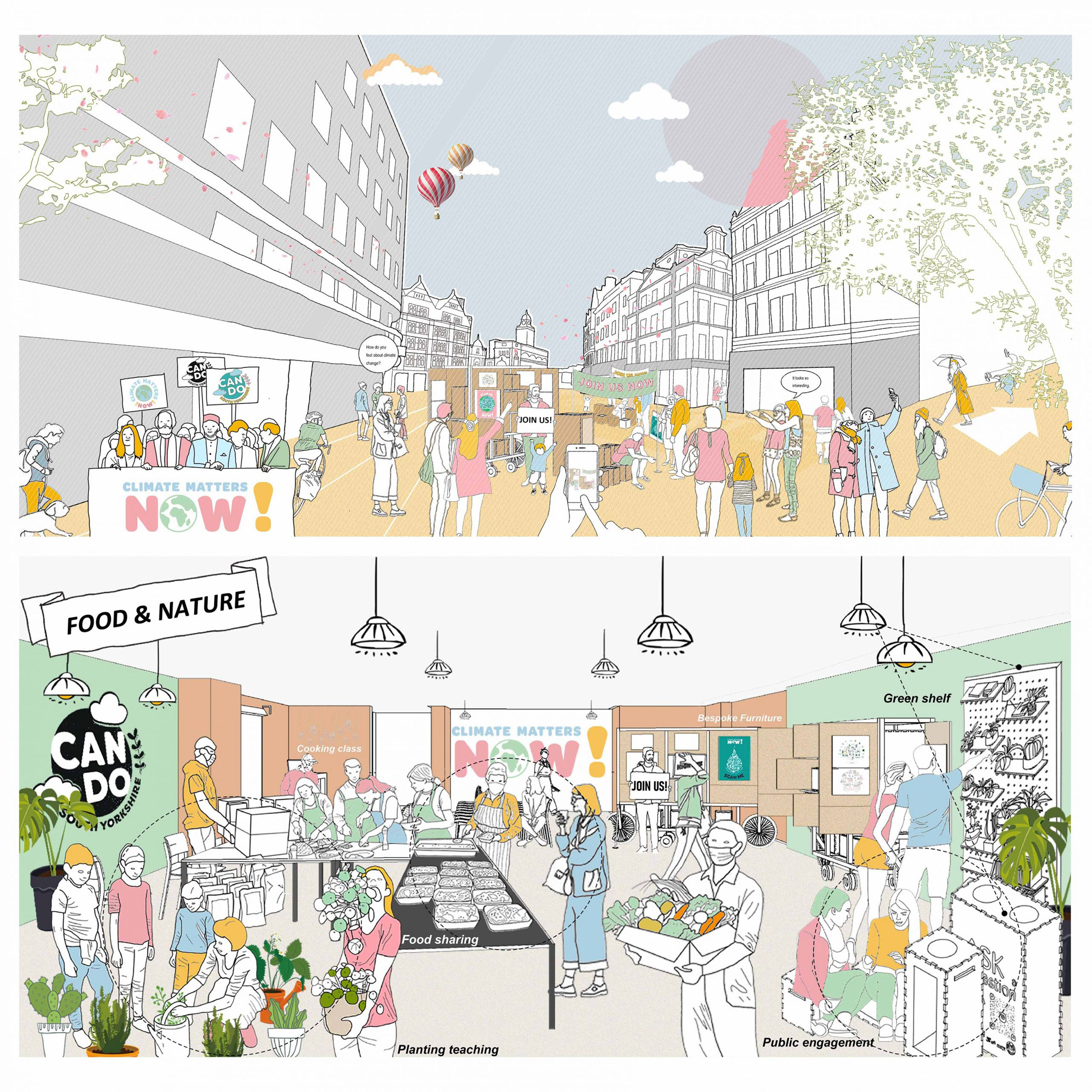 “One student team, Climate Matters Now, worked with Sheffield Climate Alliance to develop a vision for an ambitious project that aims to connect people, nature, and climate.

“The team tested a series of pop-up and engagement ideas which, alongside Sheffield Climate Actions own engagement plans, guided the team’s proposals.

“This included a series of climate-related themed weeks, alongside a pop-up climate hub in Sheffield, and additional engagement tools and prototypes.” 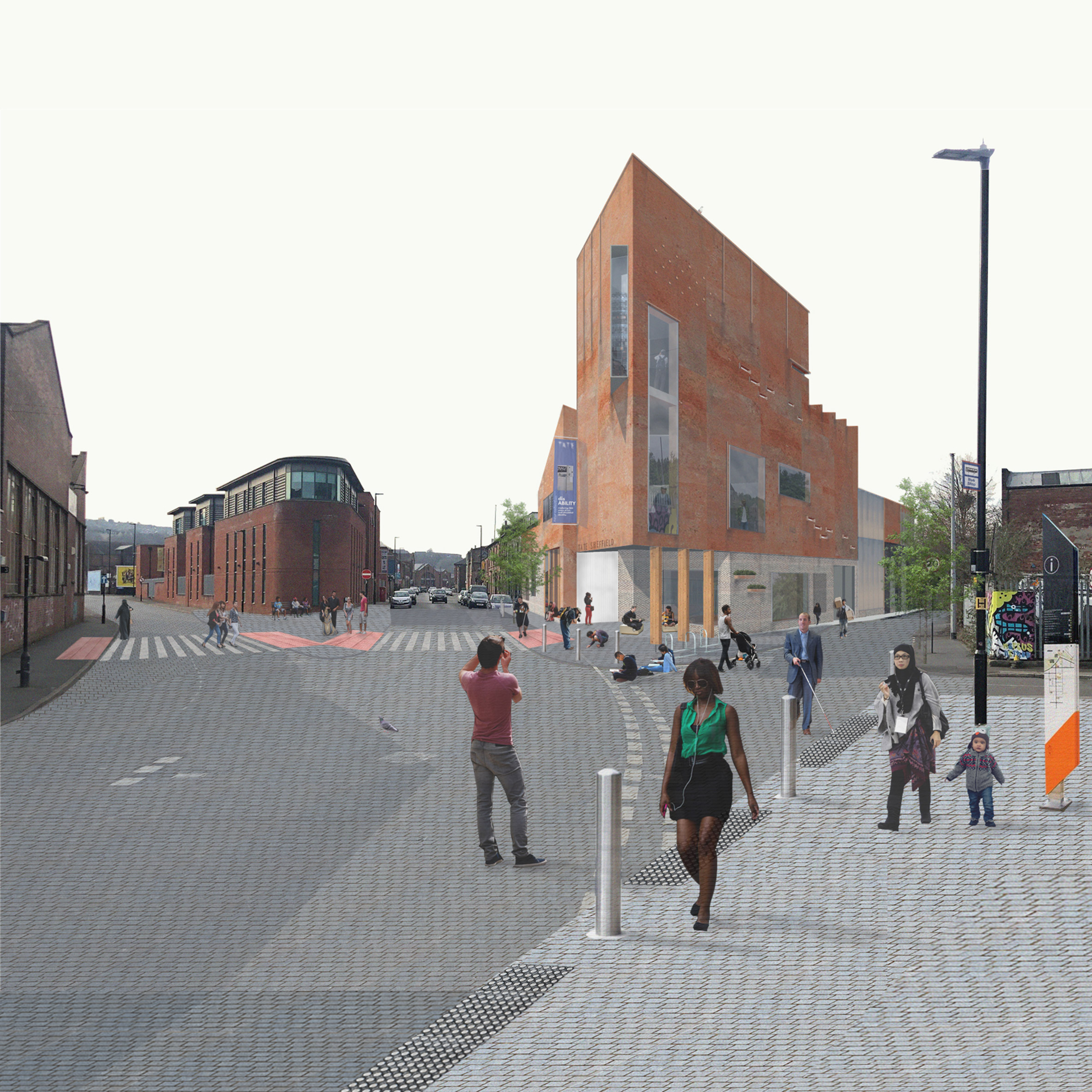 “Tate Sheffield, located in the city’s Kelham Island quarter, acts more as a centre for the arts than a traditional gallery.

“The design embodies a critical re-examination of the history of the Tate organisation and art itself: combining the permanent collection, ‘ART & disABILITY,’ with a series of temporary exhibition spaces, a workshop, archive, research space, library, and more.

“Drawing inspiration from Kelham’s tangible industrial past, the building references themes of scars and stitches to tell a story of hardship and resilience, aiming to allow meaningful connections to be found in the tensions between art, people and place.” 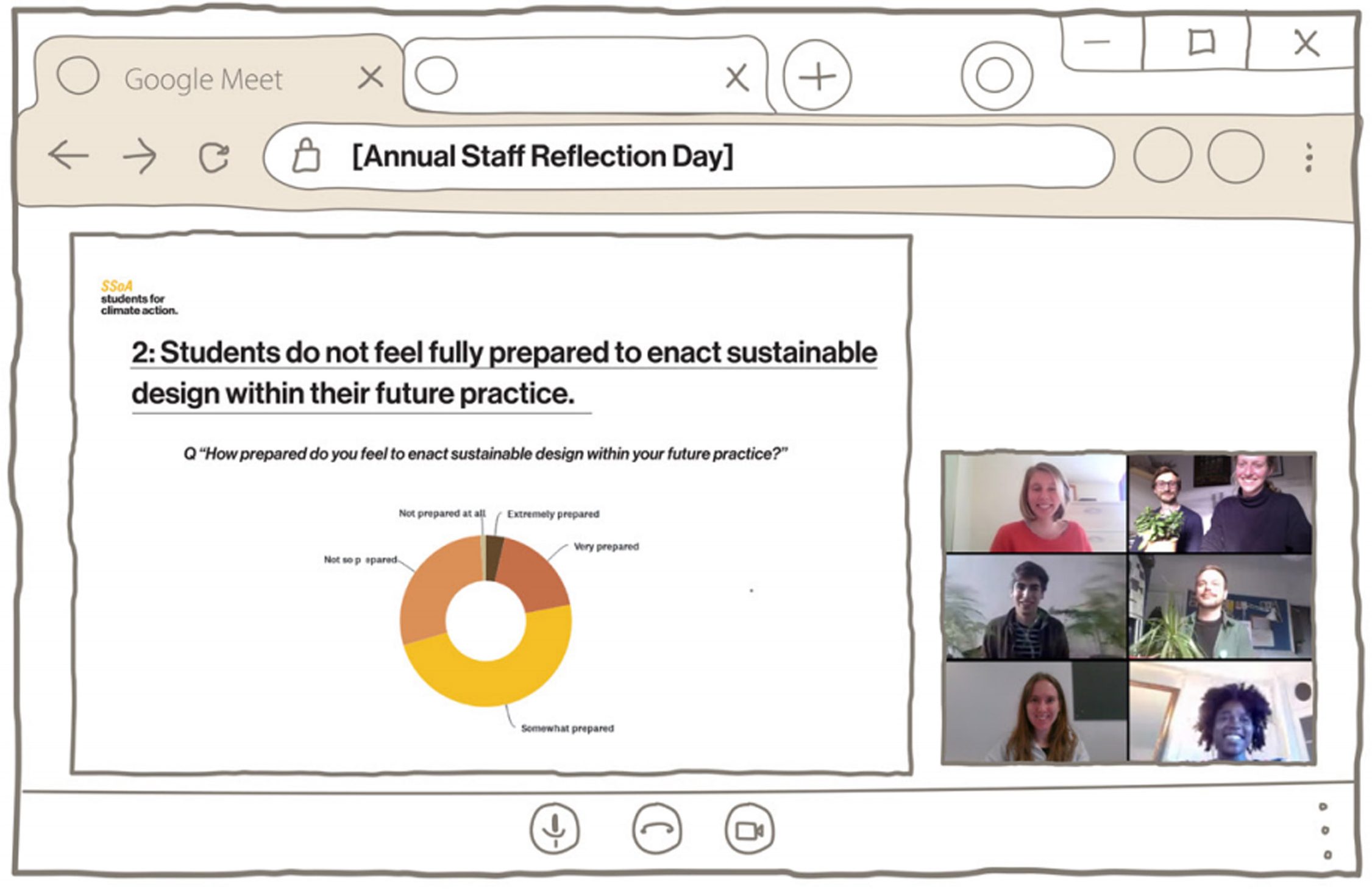 “A student-led group is campaigning for a greater emphasis on sustainability in the curriculum.

“Their concern is that architectural education hasn’t yet grasped the urgency of the climate emergency, and this group gives students in the School of Architecture a collective voice.

“They’ve grown from seven to thirty members, including students from undergraduate and postgraduate courses.

“The group has also fostered a constructive relationship with the department: hosting lectures and creating shared resources to open up different approaches to sustainability.” 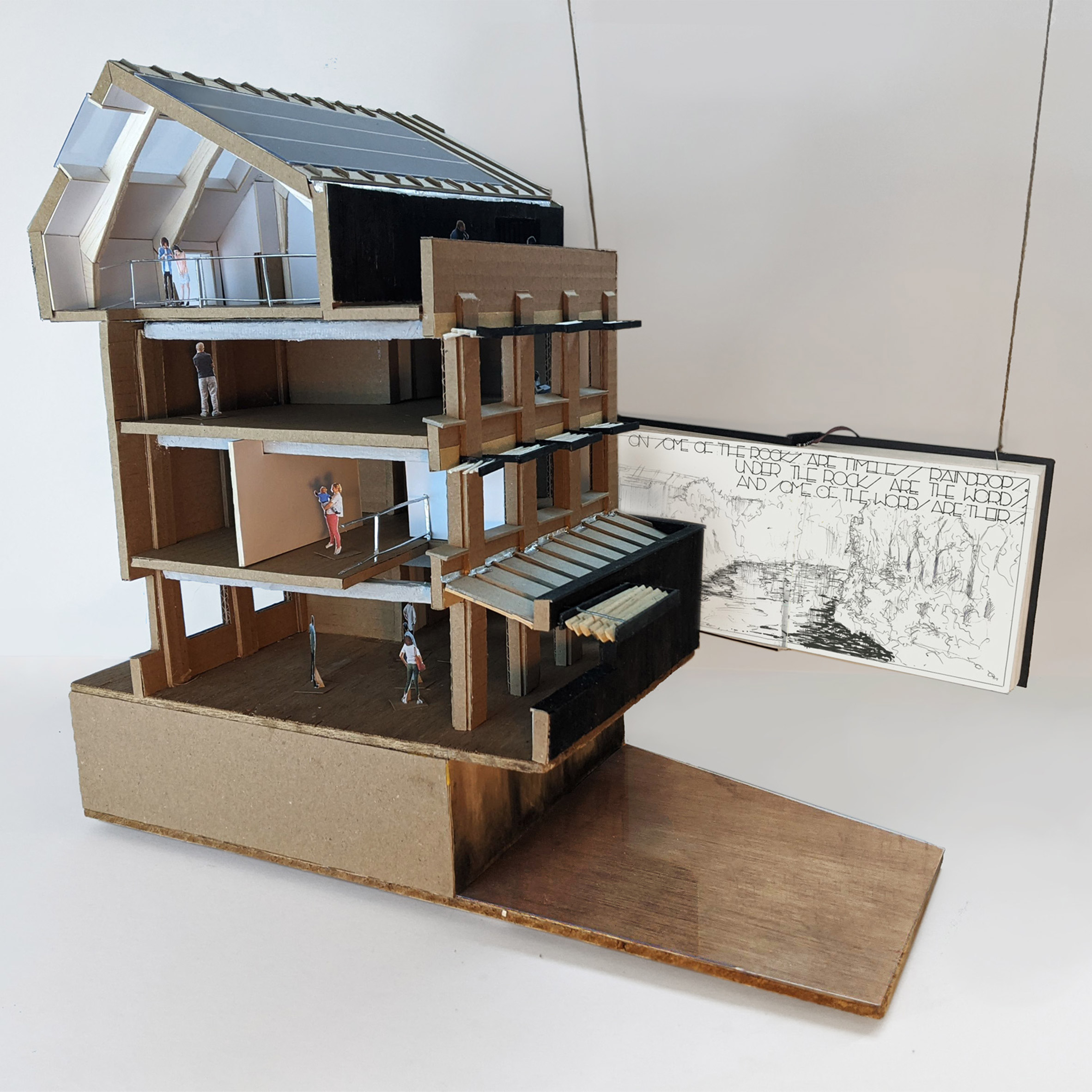 Rehabilitation on the River Don by Thomas Matthews

“This scheme sets out to explore how we can situate sustainable projects in their wider ecological context. It examines how a building can reflect on a history of pollution and exploitation of the River Don while also playing an active role in its rehabilitation.

“The project champions an approach of prioritising the existing when designing sustainably. The extension is modest in size and increases the efficiency of the existing fabric.

“This shows itself in detailing the retrofit to EnerPHit standard, and opening up floor voids and installing solar shading to optimise the spatial and thermal qualities of the building.”

Anti-Racism Call to Action by University of Sheffield students

“Anti-Racism at SSoA: A Call to Action was written in the summer of 2020 by a group of students from varied year groups and backgrounds, each advocating for a change in the operation of the Sheffield School of Architecture.

“The letter was a product of conversations between students. Split into three main parts, it firstly calls out the school’s complicity in racism; the second demands action and lists a detailed action plan to initiate this.

“The third part of the letter draws upon experiences of marginalised students.”

Students: students from across Sheffield School of Architecture’s courses 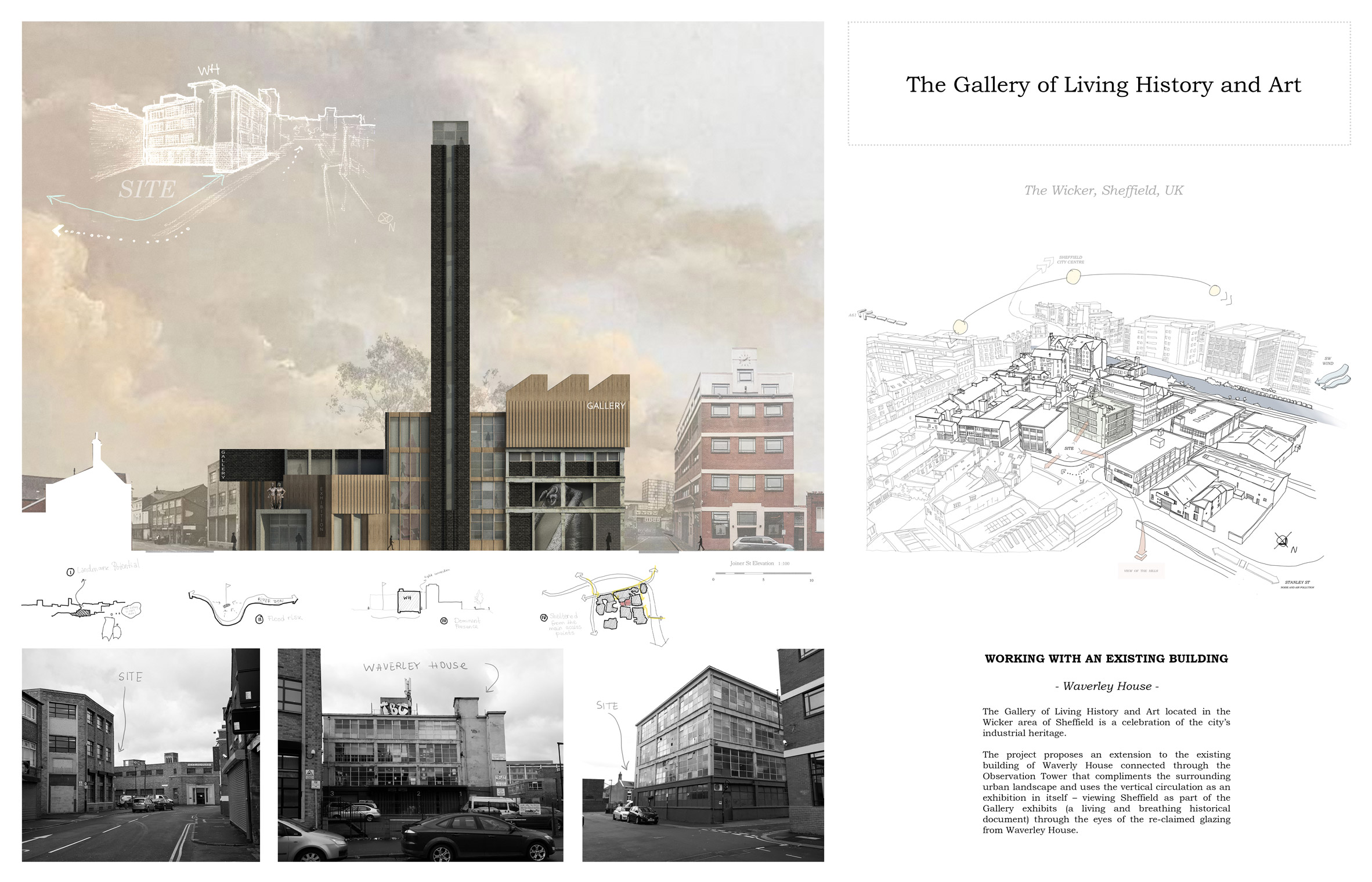 Sheffield Gallery of Living History and Art by Mariya Nesheva

“The Gallery of Living History and Art in Sheffield is a celebration of the city’s industrial heritage that aims to enrich the local cultural scene whilst attracting a wider range of visitors with the introduction of the existing Drawing Matter Collection.

“The project proposes an extension to the existing building of Waverly House connected through the Observation Tower that compliments the surrounding urban landscape.

“It uses the vertical circulation as an exhibition in itself – viewing Sheffield as part of the Gallery exhibits (a living and breathing historical document) through the eyes of the reclaimed glazing from Waverley House.” 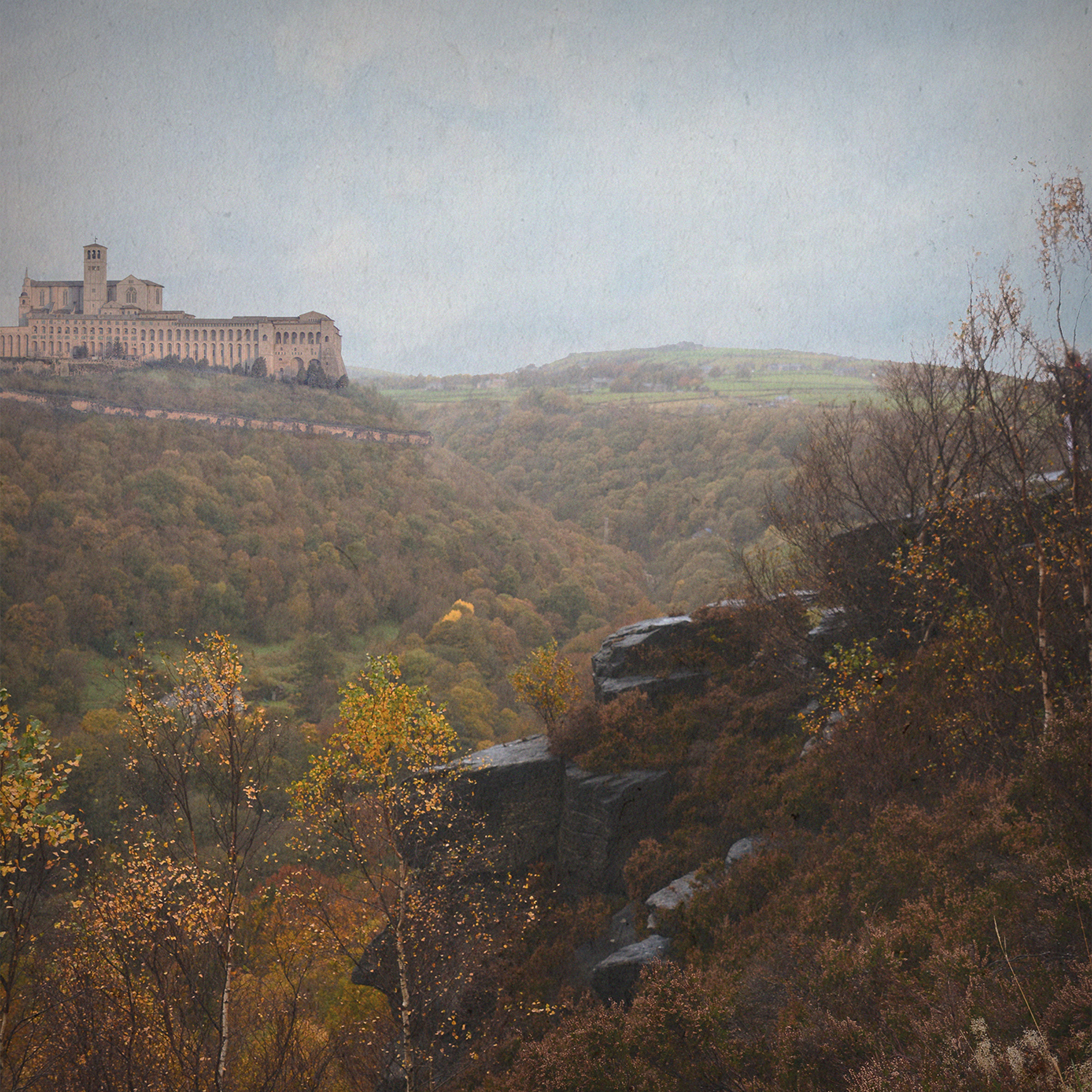 “Amid a climate, financial, housing and mental health crises, Elmet is envisaged as a new model of rural living that is based on a model of locality that places importance on local materials, skills and history.

“The scheme takes inspiration from Italian hilltowns like Assisi, Bergamo and San Gimignano, amongst others, as well as more local influences such as Heptonstall and Hebden Bridge.” 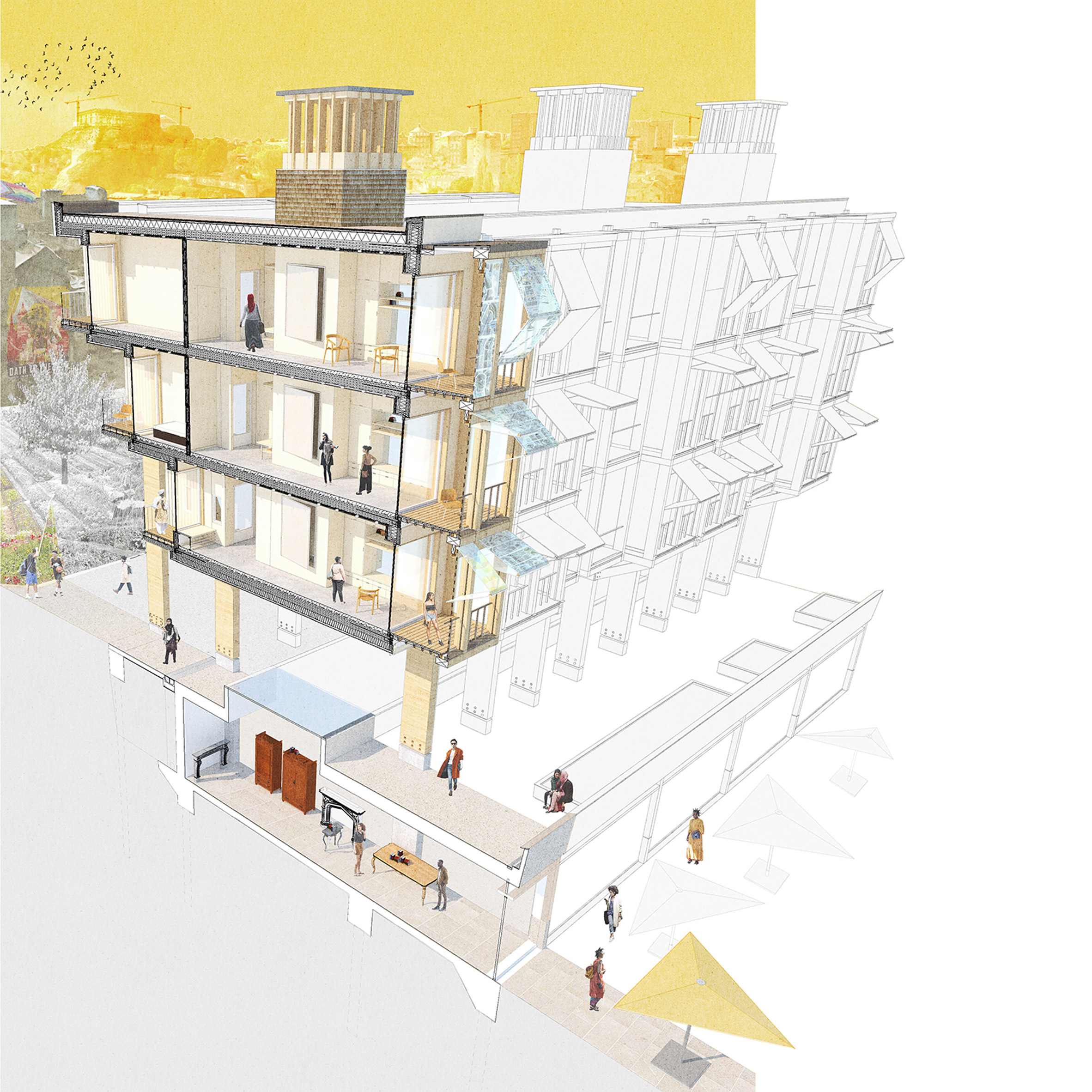 The Queer Republic of Nottingham

“Set in an alternate reality, the queer republic of Nottingham has emerged, and hierarchies of power are reversed. Every day starts with an oath to the (progress pride) flag. Roads into the city have been blockaded, leaving rail as the only entry point.

“Trans clinics and surgeries have begun to replace coffee shops and travel agents. Coming from near and far, displaced queer people make their way here – and not just for the excellent food.

“Welcomed with open arms: the ministry of plunder carves up the old, non-queer reserves of wealth and shares it amongst the new arrivals.” 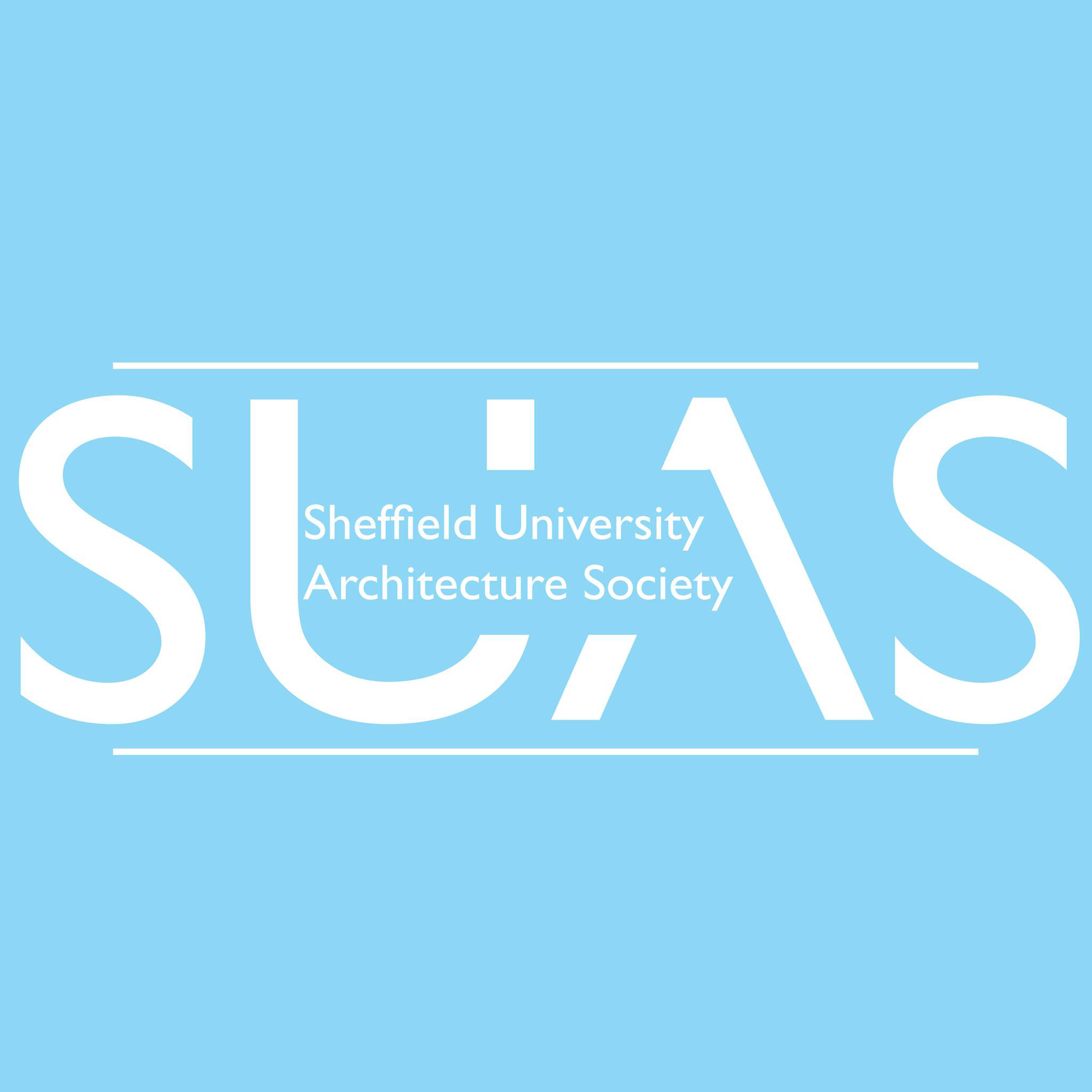 “Sheffield University Architecture Society encourages a thriving social and educational scene within the School of Architecture by bringing together undergraduate and postgraduate students and staff who are studying, teaching or interested in architecture and its related fields.

“The society encourages lively architectural debate and learning through a weekly lecture series, inviting practising professionals (largely alumni) to present a lecture on their related field.

“This includes design film screenings and weekly ‘Lunchtime Specials’ series of talks given by students for students, on a range of topics including ‘how I got my placement’ and ‘how I did this drawing.'”

This school show is a partnership between Dezeen and the University of Sheffield. Find out more about Dezeen partnership content here.

The post Ten student architectural projects from the University of Sheffield appeared first on Dezeen.