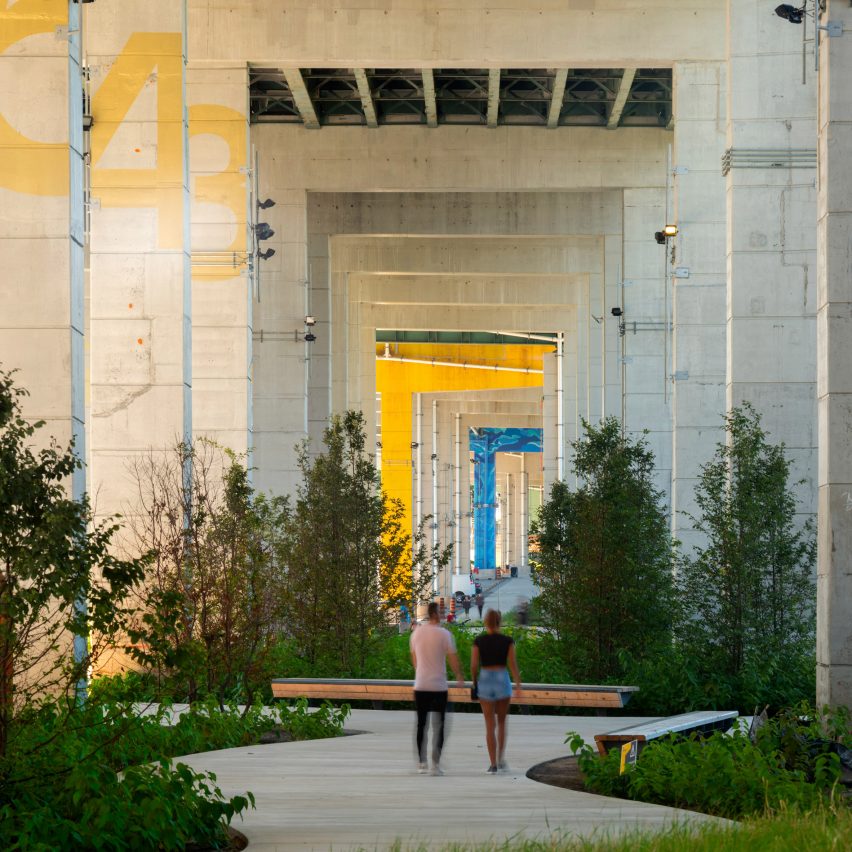 Toronto firms Public Work and Greenberg Consultants have completed a new park underneath the city’s Gardiner Expressway, to provide “a vital artery for pedestrians and cyclists”.

The first phase of The Bentway – a new park and path planned to span 1.75 kilometres (one mile) underneath the elevated freeway – wrapped up in August 2018. 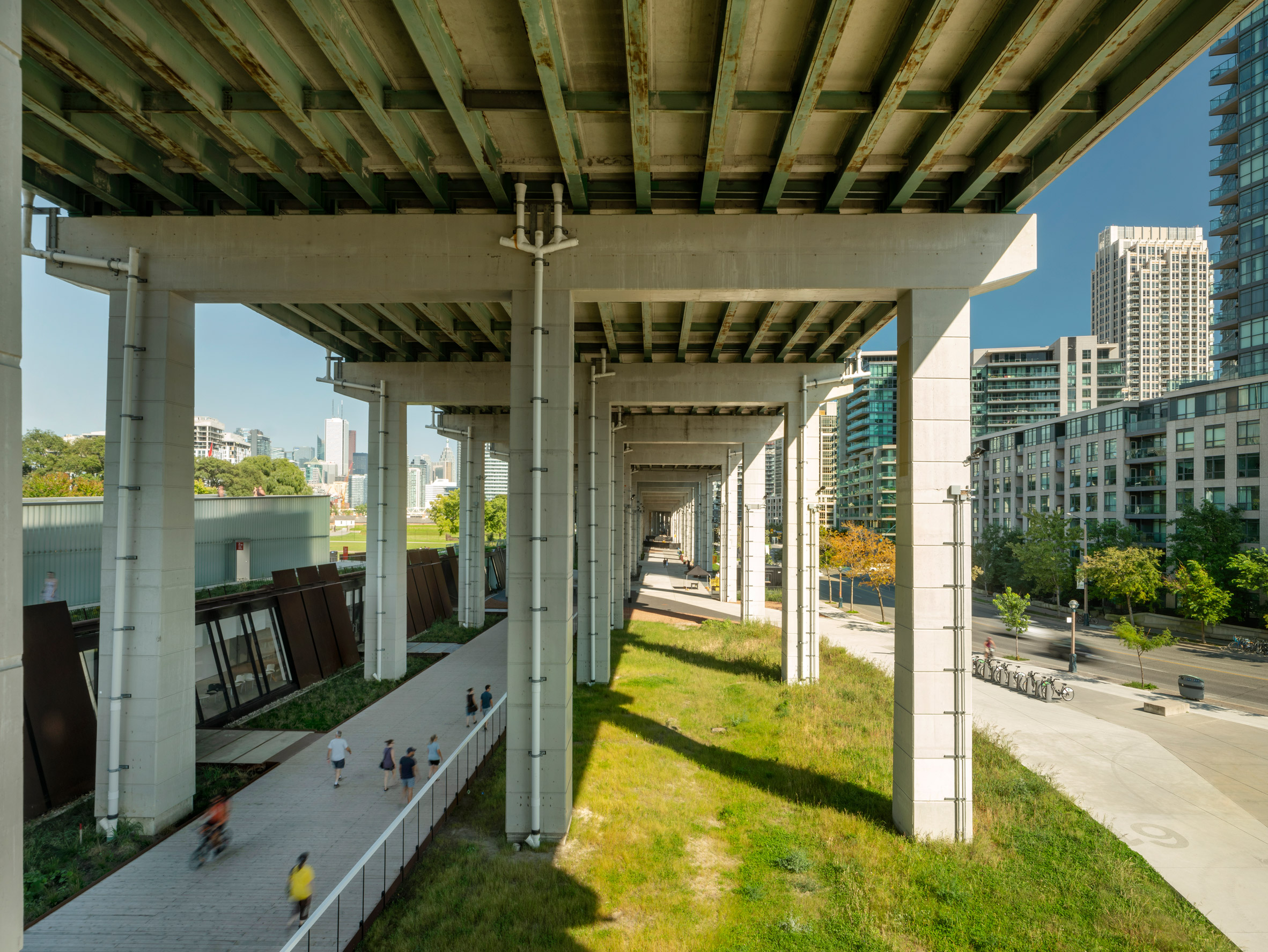 First revealed in 2015, the proposal is the brainchild of Public Work – which served as the design lead and landscape architect – and design advisor Greenberg Consultants.

The two firms aimed to create various outdoor areas for year-round activities and events in the under-utilised space. 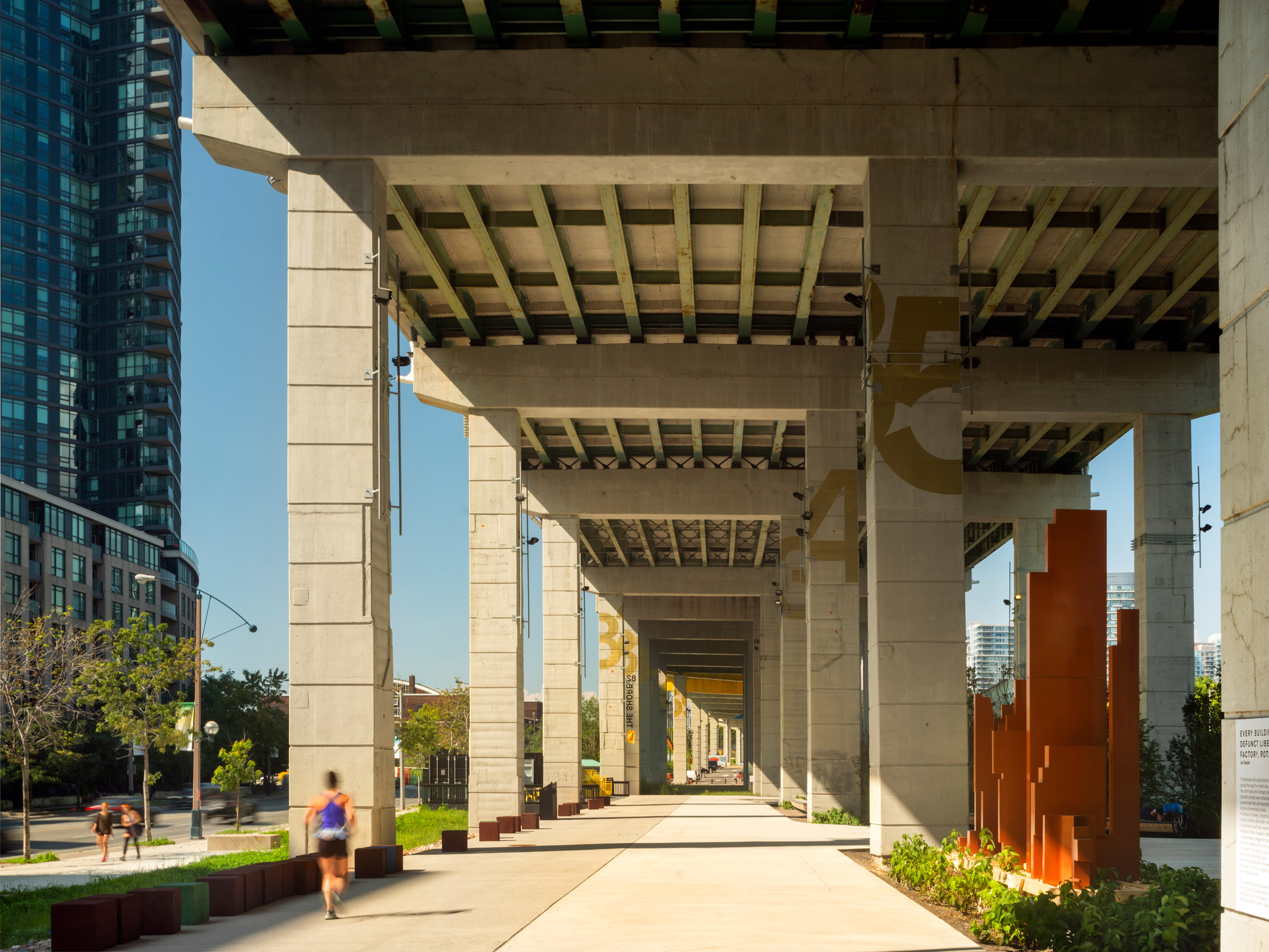 New facilities are protected from the elements by the existing infrastructure above, and separated by concrete pillars that support the highway.

“Public Work’s starting point for the design was the Gardiner [Expressway’s] series of supportive concrete columns called ‘bents’, that can either function together or on their own to offer spaces for a diverse range of programming and events,” said a statement. 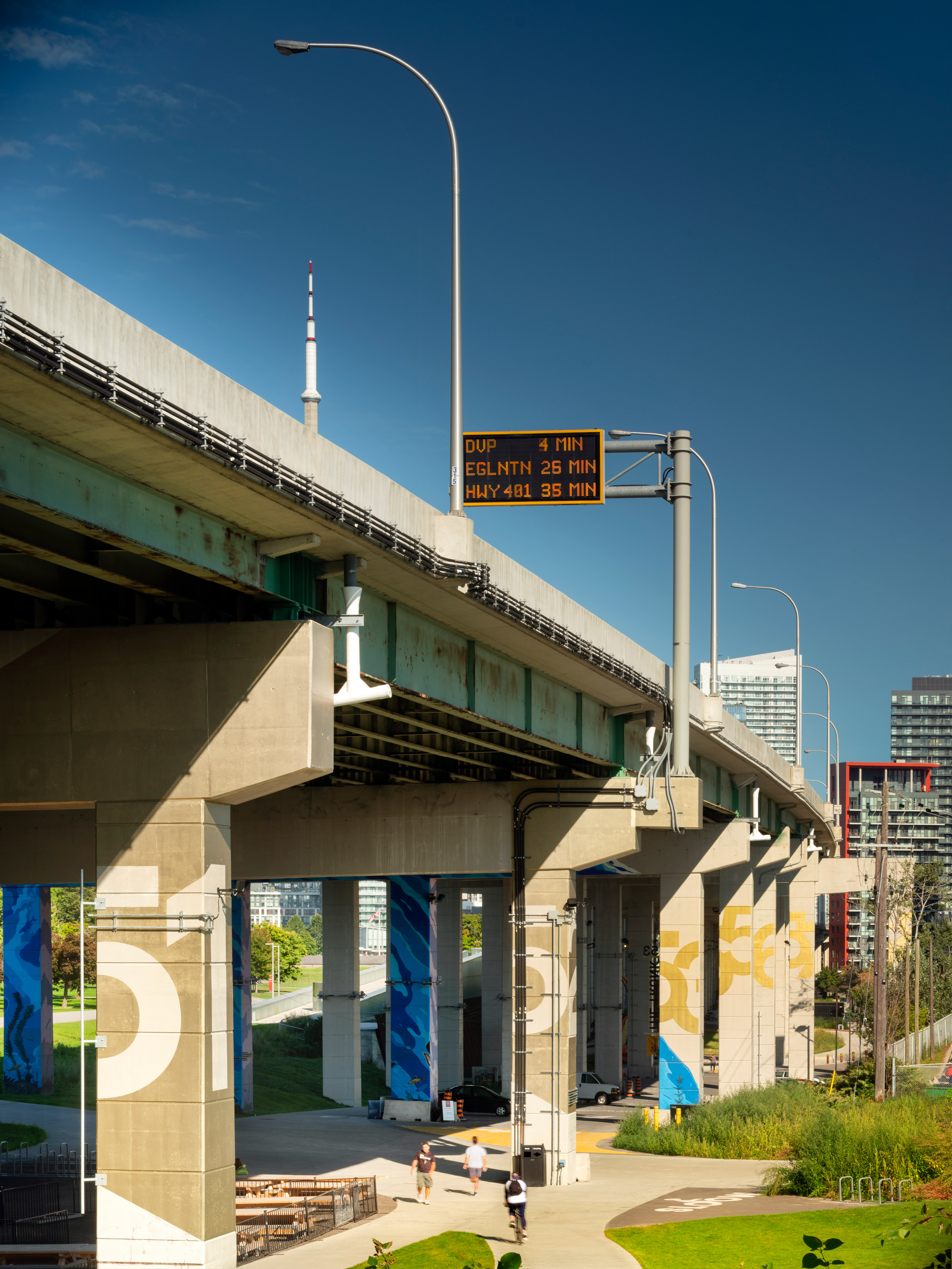 “The expressway provides a canopy at varying heights from intimate to a majestic 15 metres high, with the bents offering structural support for clamps, cables, power and lighting.”

The recently completed portion of The Bentway stretches from Strachan Avenue to Bathurst Street, and runs across seven different neighbourhoods in the city. The firms said it will provide “a vital artery for pedestrians and cyclists”. 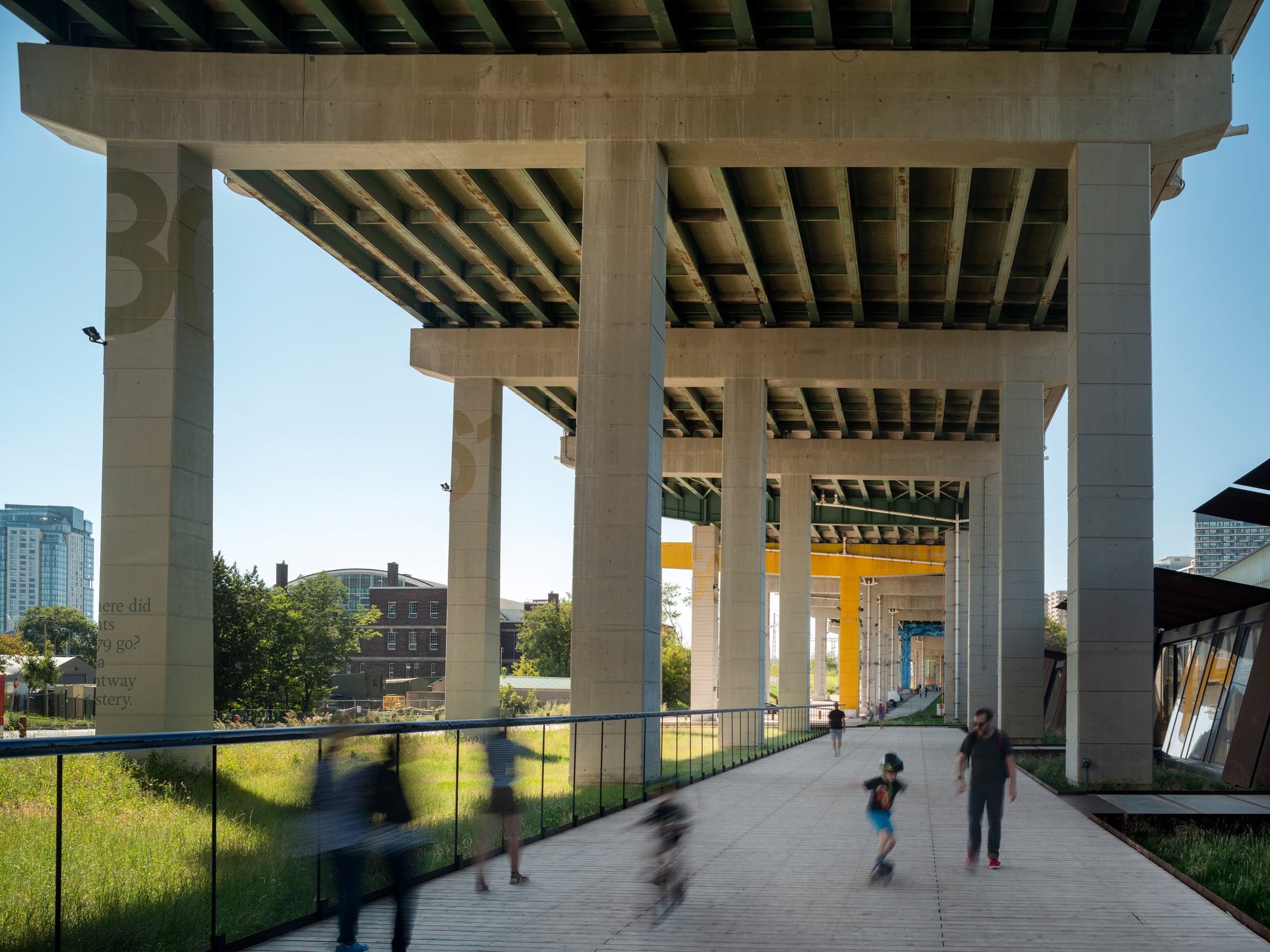 Facilities include various gardens, a skate trail, recreational amenities, as well as space for markets, public art, festivals and other public events. Additional aspects include a meandering walkway with plantings, a staircase that doubles as seating for an outdoor theatre, and a wider path for cyclists, skaters and joggers.

To enter the first section of The Bentway, visitors descend at Strachan Gate into an open-air amphitheatre, where bleachers can seat about 250. Washrooms, an adjacent lawn, and a green room also complete this zone. 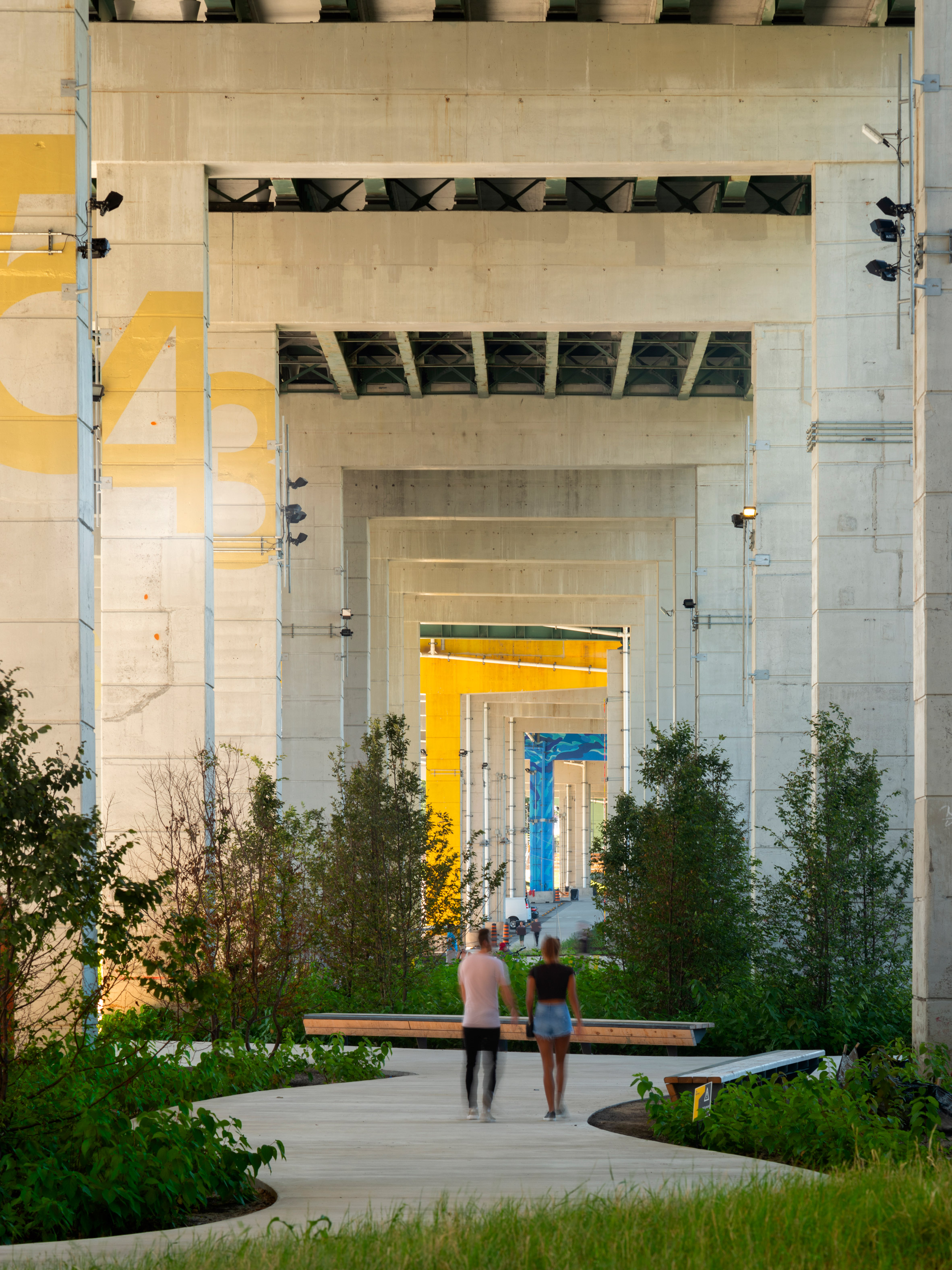 The new path also expands access to Fort York, which is a 43-acre national historic landmark with buildings dating back to the War of 1812 – a conflict between the United States and the United Kingdom.

Another events space is located in front of Fort York’s visitor centre. Nearby is a lush area with indigenous grasses, which is intended to be watered by storm run-off from the roadway above via a sustainable drainage system.

“On the ground, the project knits together public and private land, treats stormwater and repurposes displaced soil to establish a new topography,” said the statement

Much of The Bentway’s design is based on adaptive reuse, utilising existing architectural elements and design concepts to guide the project. 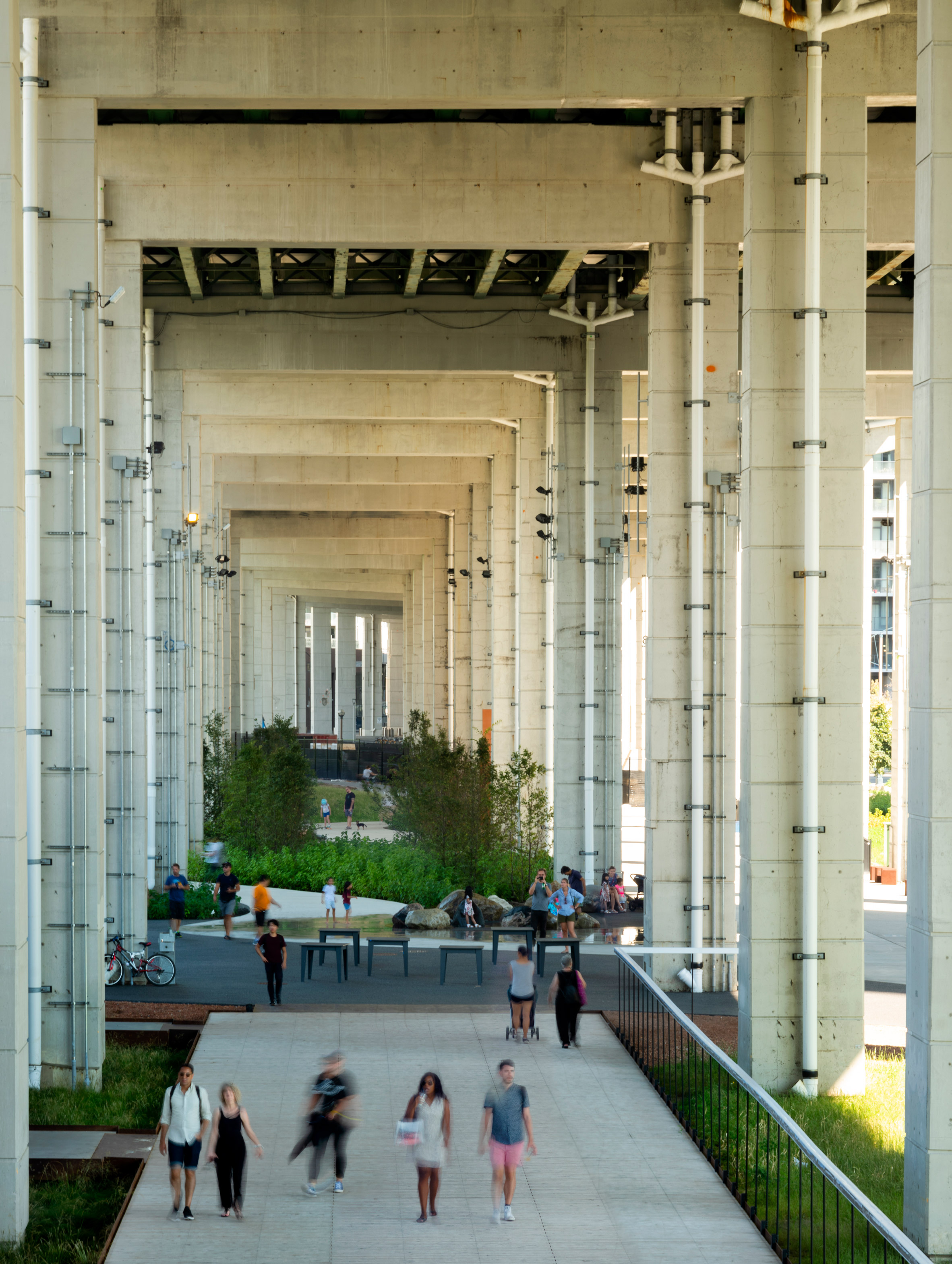 “The project’s materiality demonstrates resourcefulness and an overall desire to apply the lightest touch to achieve the greatest impact,” said the statement.

Pillars, which are used as markers along the pathway below, also create nooks for different outdoor zones. Existing numbers that were originally used to mark for repair purposes are now reinterpreted for wayfinding. 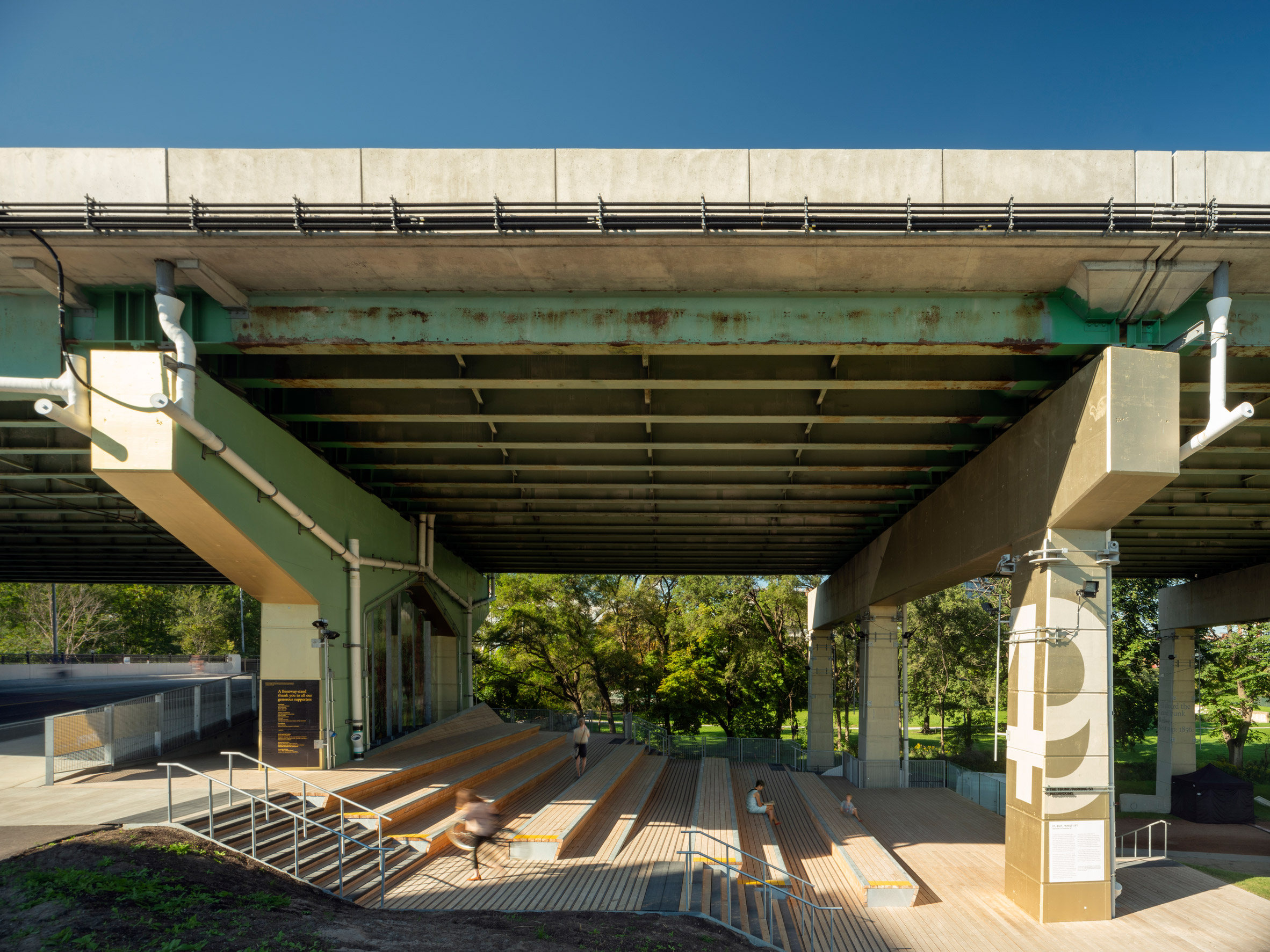 “The multifunctional space is an expression of Toronto’s unique creative energy and serves as an example of how the re-use of infrastructure can support new forms of public life,” said the team. 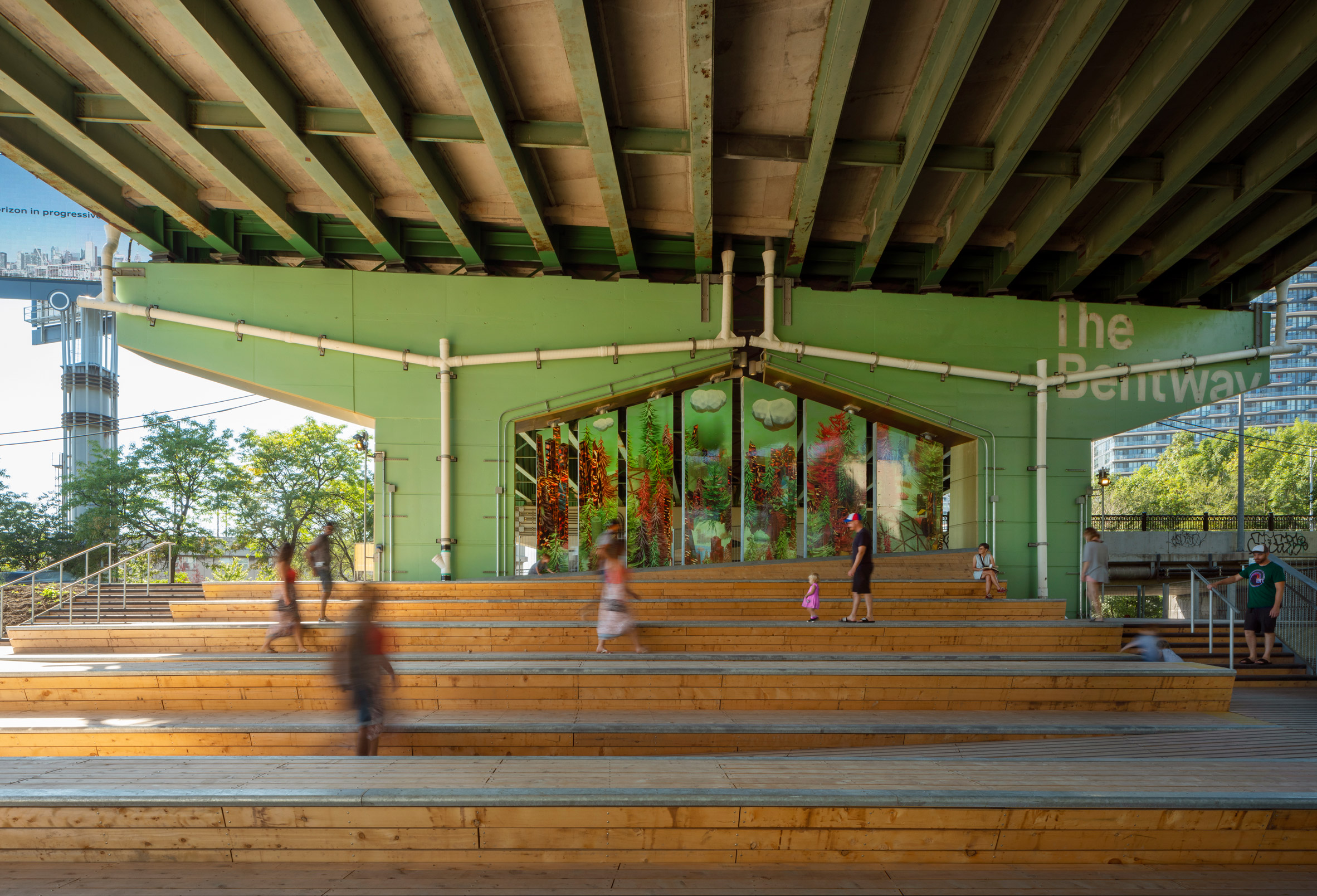 Prior to this initial phase, the firms completed a 220-metre-long skate trail along The Bentway last year, which becomes a water play zone or “kids’ splash pad” in the summertime.

The next phase will see a wooden bridge built from cross-laminated timber and suspended from the underside of the Gardiner Expressway. The design will offer a safe route to access Fort York Boulevard. 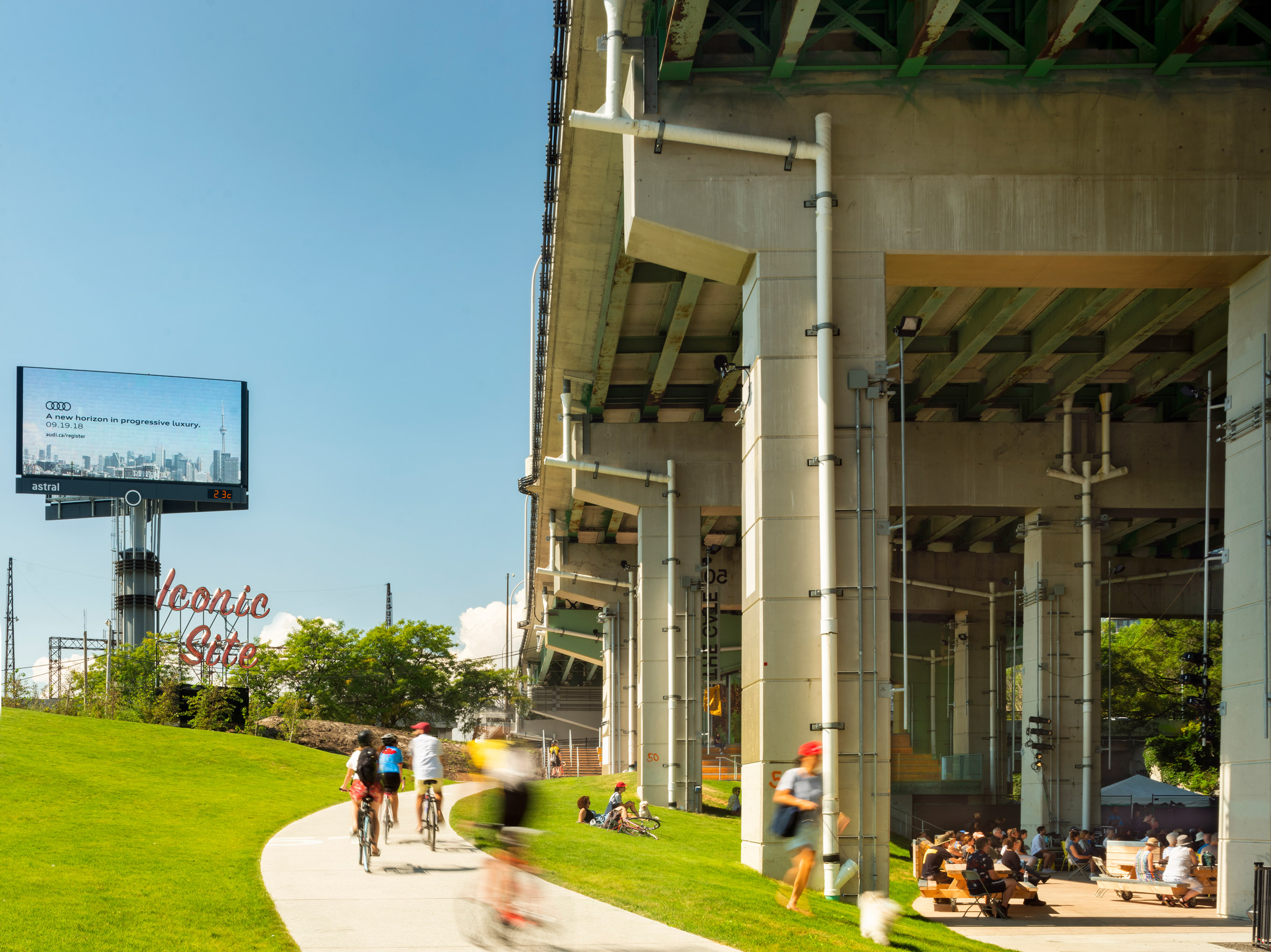 The Bentway is planned to link important attractions and destinations across Toronto, from Fort York National Historic Site, Ontario Place and Exhibition Place, to Harbourfront Centre and the CN Tower.

The project was funded through a public-private partnership between the City of Toronto, and philanthropists Judy and Wilmot Matthews. Not-for-profit The Bentway Conservancy has been set up to manage and operate the scheme.

The development is among a number of architecture and urbanism projects set to transform Toronto in the upcoming years.

The Bentway is also a member of the High Line Network, an international network of projects that transform forgotten infrastructure into new urban landscapes, which was instigated by New York City’s High Line.

The Underline in Miami by James Corner Field Operations is similarly designed underneath an elevated transport route, planned as a 10-mile-long (16-kilometre-long) park and urban trail.

Photography is by Nic Lehoux unless stated otherwise.