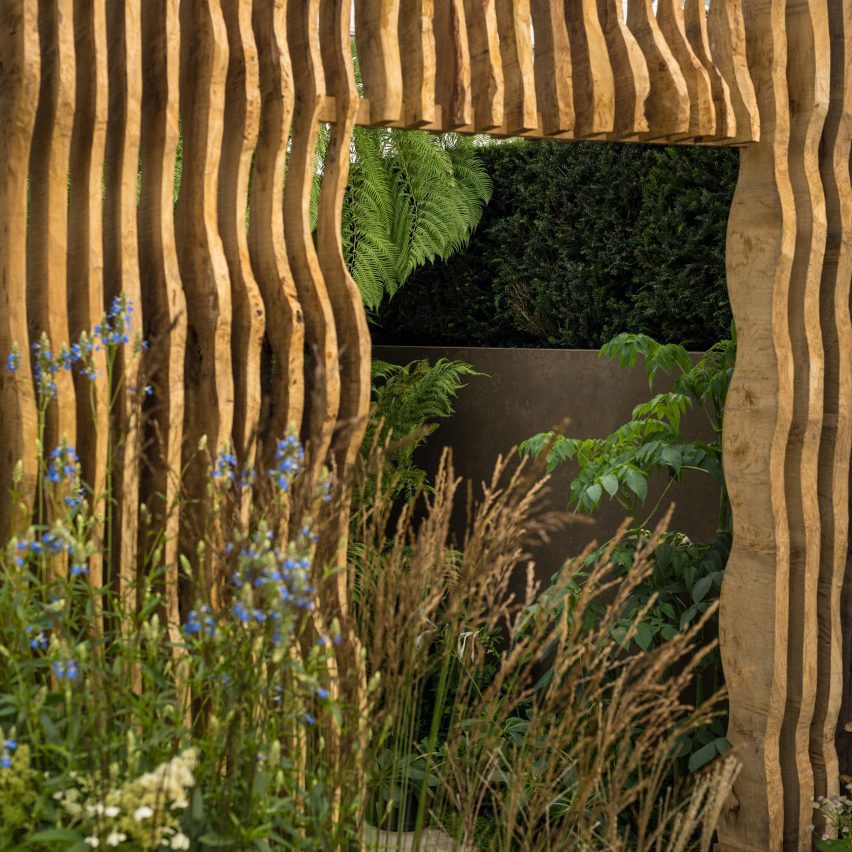 Hoblyn designed The Boodles Secret Garden for this year’s RHS Chelsea Flower Show, which took place in London from 21 to 26 September. It was installed by garden designers The Garden Builders.

The designer’s aim was to create an enclosed retreat in the spirit of the secret garden featured in the children’s book by Frances Hodgson-Burnett.

To achieve this, he planned a series of walls to divide up the space using materials that have just as natural a texture as the planting areas.

The two walls that form the backdrop to the garden are hand-finished with Armourcoat‘s exterior polished plaster (PPX).

This limestone render is durable, low-maintenance, and offers the appearance of naturally honed stone.

“The garden has a very naturalistic feel about it, using a lot of natural products like timber in its raw form and hand-dressed stone,” said Hoblyn, “and I really wanted to create a wall that had the same mood.”

“Armourcoat PPX creates this lovely pitted effect, so it looks like it’s been there for a long time, which is bang on for the ambience I was trying to create for the sanctuary garden,” he explained.

The garden’s undulating wooden screen forms the entrance to the enclosed garden.

The screen is made from consecutively cut oak sheets that have been hand carved to create a rippling surface. There are gaps between each sheet, as well as a doorway cutaway, offering visitors a glimpse inside.

On either side of these walls, Hoblyn added ornamental grasses, tree ferns, and flowers in shades of pink and blue.

This is the seventh garden that Hoblyn has created for the Chelsea Flower Show, which typically takes place in May but was postponed this year as a result of the Covid-19 pandemic.

Here, he hoped to highlight the importance of finding sanctuary and restoring wellbeing at a time of global crisis.

The designer points out that this is not his first time using Armourcoat PPX in a show garden, as he believes the product is well suited to an outdoor setting.

“It’s a perfect exterior product as it looks flawless and is designed to last,” he said.

“I would use it for all my show gardens because it’s a great way to get a really good effect, but it’s a real product that you can use outside,” he added. “This is not a stage set; this is a real garden.”

The Boodles Secret Garden was awarded a Silver Gilt medal from the organisers, recognising it as one of the best in show.

For more information about Armourcoat PPX, visit the manufacturer’s website.

Photography is by Patrick Kerrigan-Hall.

This article was written by Dezeen for Armourcoat as part of a partnership. Find out more about Dezeen partnership content here.