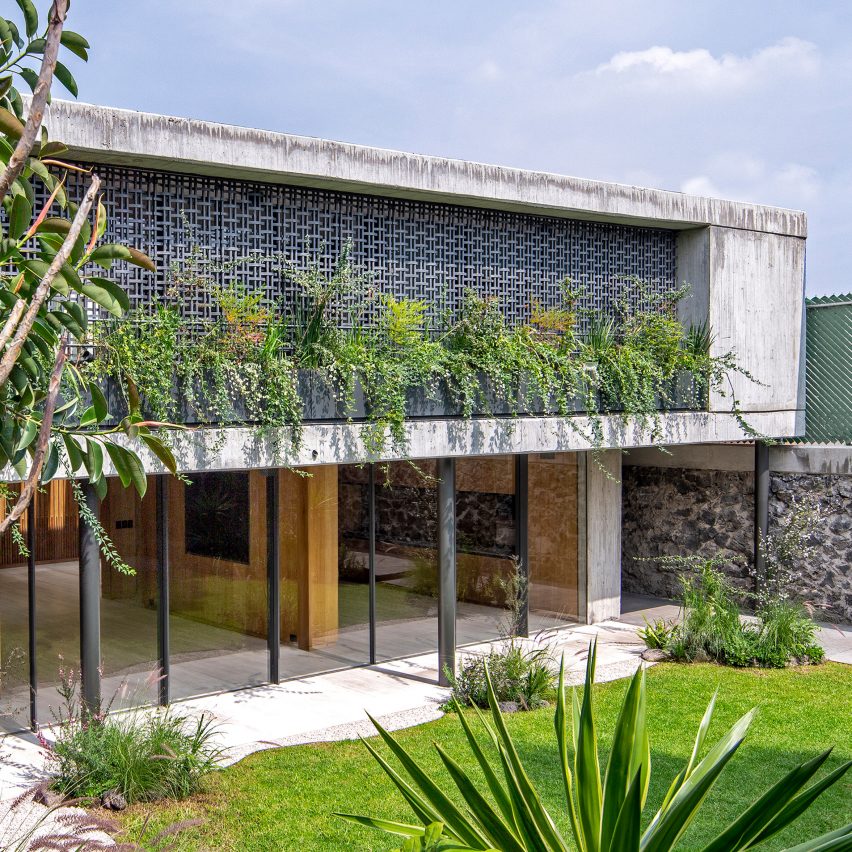 Mexican firm Viga Arquitectos sought to lighten up the atmosphere in a concrete house by reconfiguring the layout, adding pale-toned finishes and incorporating more greenery.

The project, called Casa Agua, entailed the renovation and expansion of a 1970s house in Mexico City whose original architect is unknown.

The residence is located in Pedregal, an urban neighbourhood that was designed by famed architect Luis Barragán with input from artist Diego Rivera.

Local studio Viga Arquitectos wanted to preserve the home’s original elements while creating a more open atmosphere for the new owners – a family of five.

“As part of a sustainable approach, it is intended to take advantage of the existing reticular structure, respecting the load-bearing walls and columns but always with the idea of ​​opening the space to its maximum,” the studio said.

Rectangular in plan, the two-storey home has walls made of concrete and glass.

On the main elevation, which faces south, the architects added a new balcony that slightly extends over the lower level and is supported by metal columns.

Fronting this balcony is a folding, steel lattice that provides privacy.

“The main reason for the screen is that the client wanted to regulate their views during the day without the use of shades,” the team said.

A defining feature of the 600-square-metre home is its circulation strategy, the architects said.

The building is accessed via a pathway that runs alongside a garden and connects to an exterior patio, which frames the main entrance.

The front door leads into a double-height vestibule that was conceived as both a “wooden box” and an indoor patio. The lofty space features a new, chunky staircase enclosed within wooden slats.

“Flooded with natural light and crossed by a bridge, this hall becomes the pivot of the house,” the team said.

The ground floor holds public and service areas, while private spaces are found on the upper level.

Nearly all of the building’s non-structural walls were demolished during the renovation. The architects completely reconfigured the layout, which included the addition of bathrooms and closets for each room upstairs.

White walls and pale-toned oak flooring help create an airy atmosphere. Concrete columns were covered with bleached walnut in order to “lighten the volume and allow the visual continuity of the open space”.

Running through the centre of the home is a five-by-eight-metre skylight that ushers in soft daylight.

The home’s exterior landscape was an important consideration for the architects. Ancient layers of lava were exposed, and endemic vegetation was added to the site. Plants were added to the garage’s roof and the new balcony.

The greenery helps block views from the outside, and also helps “erase the limits of the interior with the exterior”.

Mexico City’s Pedregal neighbourhood – master-planned by Barragán in the 1940s – is known for its collection of distinctive homes.

Other residences there include the Lluvia house by PPAA, which features a black exterior and a central courtyard with a magnolia tree.

Photography is by Ángela Vizcarra.