James Jeffries of 31/44 Architects has designed a spacious and light-filled Amsterdam townhouse for his family, faced in grey brickwork and illuminated inside by a large skylight.

Architect Jeffries, who co-founded of the London- and Amsterdam- based practice with William Burges and Stephen Davies, designed the three-storey townhouse to slot into a narrow plot. 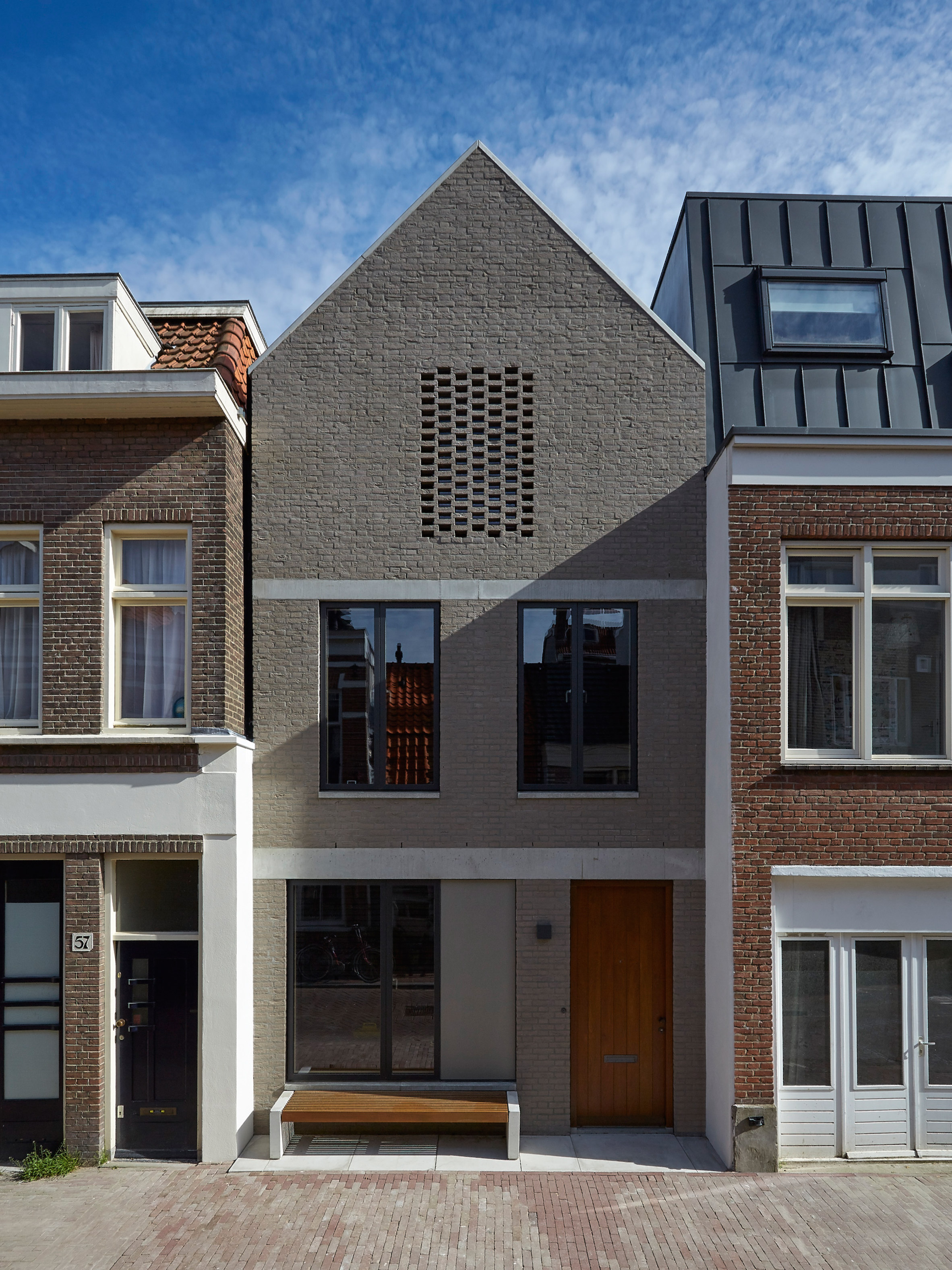 The aim was to reference the dilapidated 20th-century worker’s cottage that previously occupied the site – one of number built by local tradesman using simple materials that gave the street a distinctive character.

On the street-facing side, the gabled Wenslauer House features a dark grey brick facade, with bands of concrete above large window openings defining the different levels. 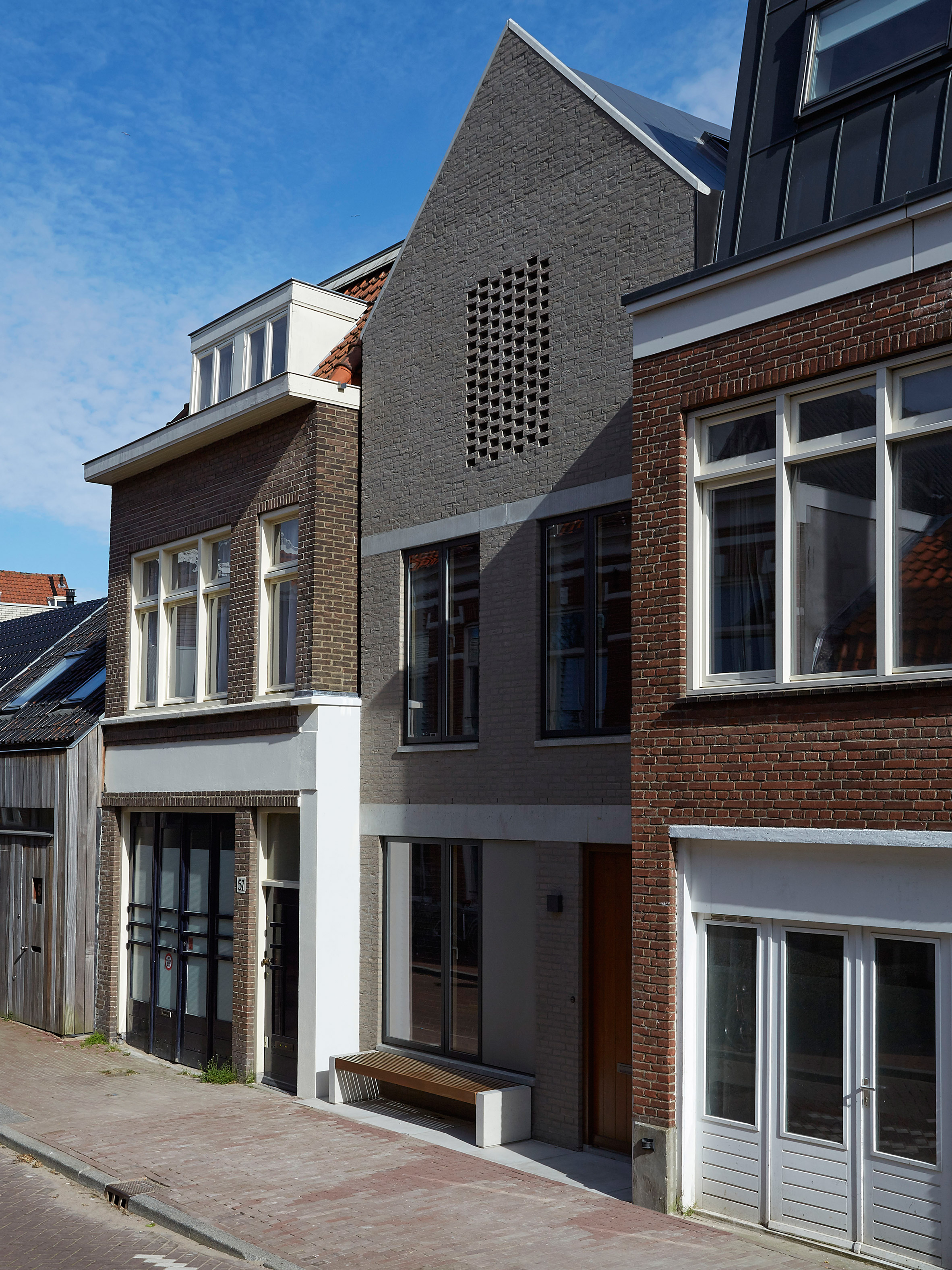 “The brickwork on the north-facing street facade is laid in a Flemish bond to make the surface as textured as possible,” said the studio.

“The facade receives the sun only at the start and end of the day when the oblique angle of the sun brings the surface to life.” 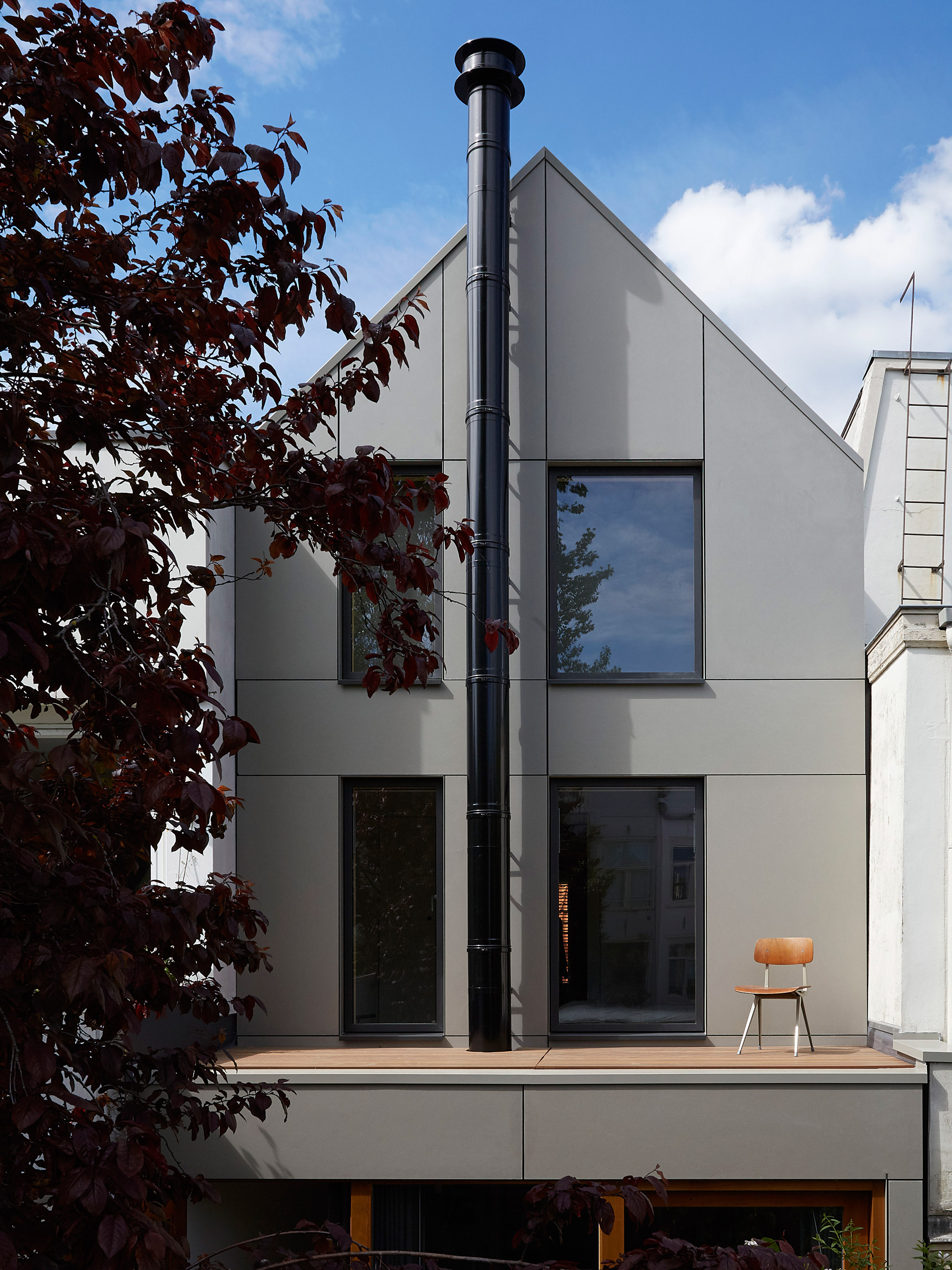 As a contrast to the front, the rear is clad in dark grey panels of fibre cement.

There is also bench in front of the house, added as a shared amenity for the street, which has a lively sociable community that frequently takes over the road during summer evenings. 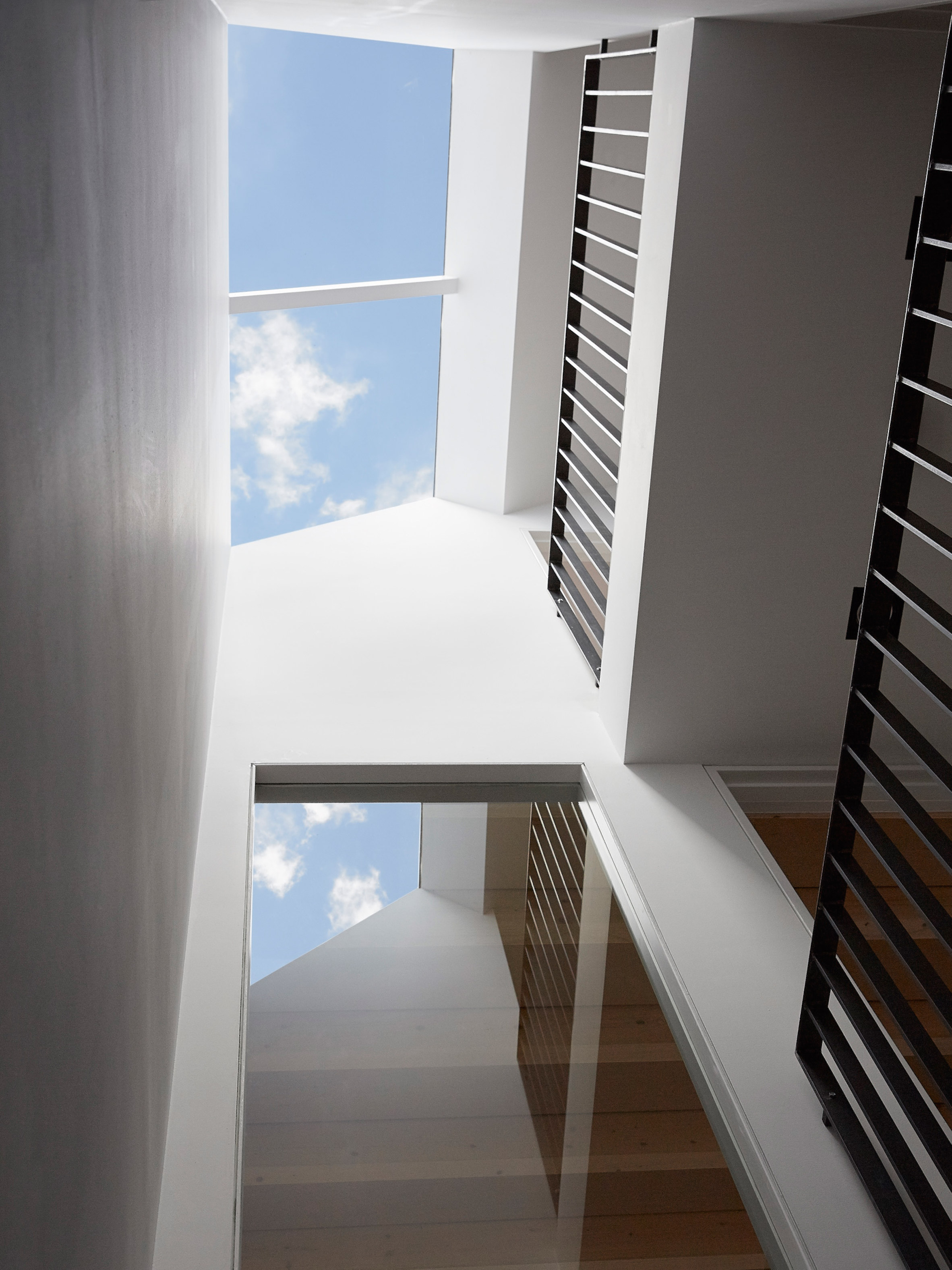 Inside, a void that runs from the roof to the ground floor is topped with a large roof light. The skylight brings natural light into the centre of the plan at each level.

Openings that overlook this central area on each floor are lined with black railings, creating balconies. 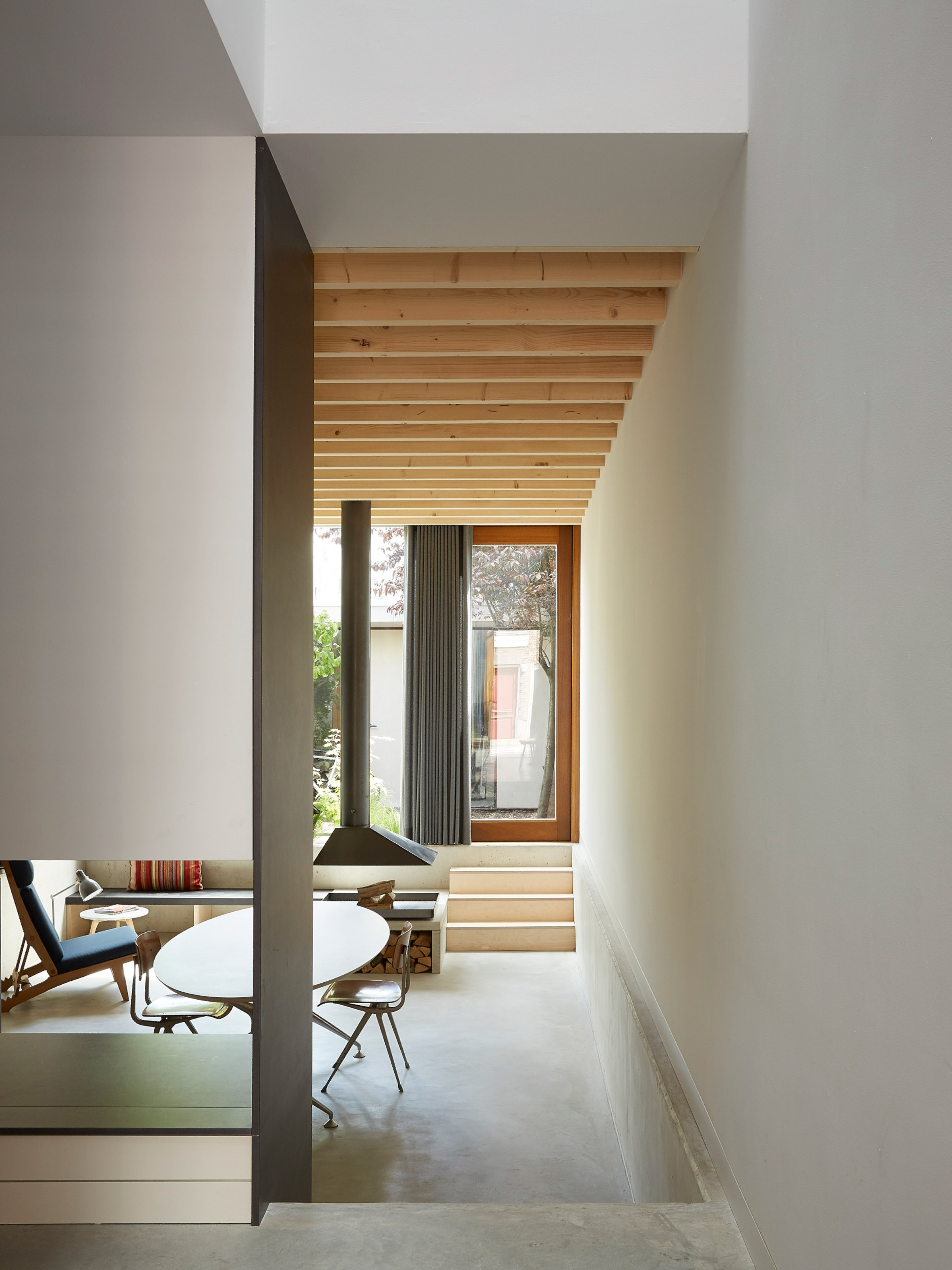 The ground floor features a split level. Jeffries’s studio is situated at the entrance level, with a large window onto the street.

Wooden steps lead down to a lower area lined with concrete that is occupied by kitchen and living room, where glazed doors open onto the rear garden. 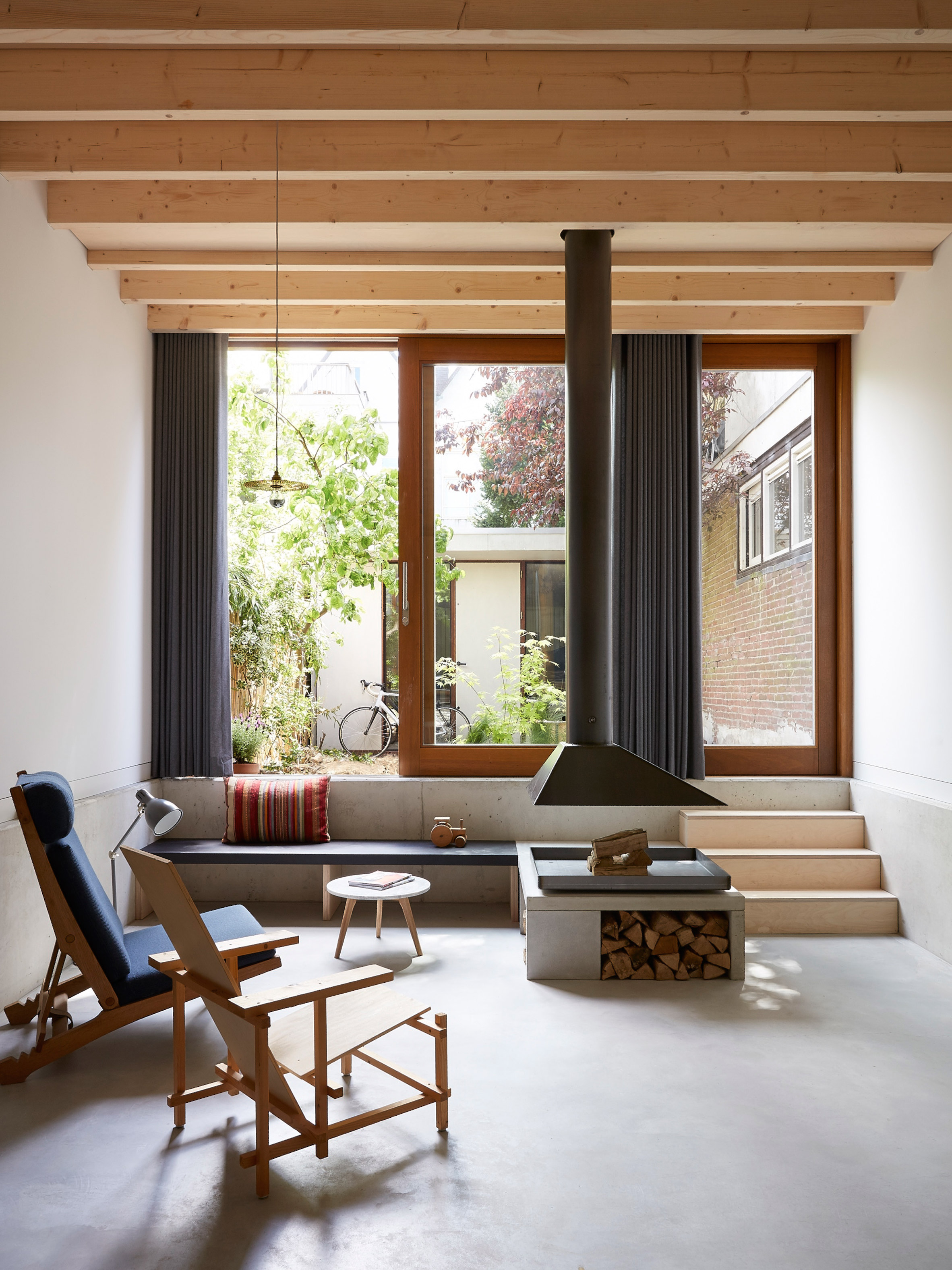 A concrete fireplace in the living area is topped by a suspended steel chimney, while a built-in bench beside it creates a place to sit that is close to the fire with views to the garden.

“Constructed from precast concrete panels, the fireplace features a suspended steel flue that is left boldly exposed on the rear elevation – a quiet reference to the light-industrial heritage of the area,” said the architects. 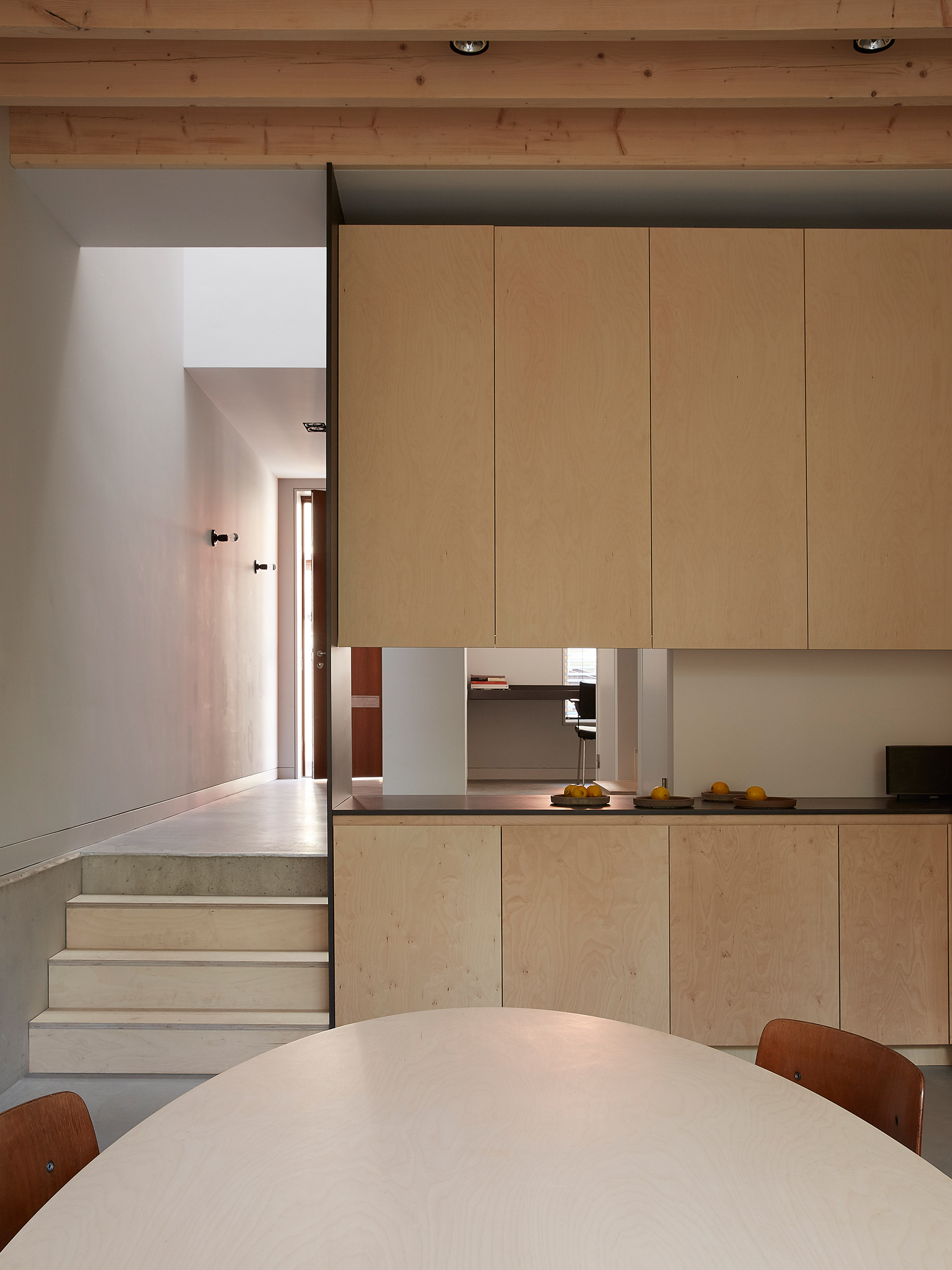 Opposite this, L-shaped wooden cabinets wrap the kitchen. They echo a series of custom-made units of black and grey MDF and plywood in the property, including the bathtub and sink.

The timber structure remains exposed across the ceiling of the ground and first floors, because Jeffries wanted to create a warm atmosphere in the spaces that his family will spend most of its time. 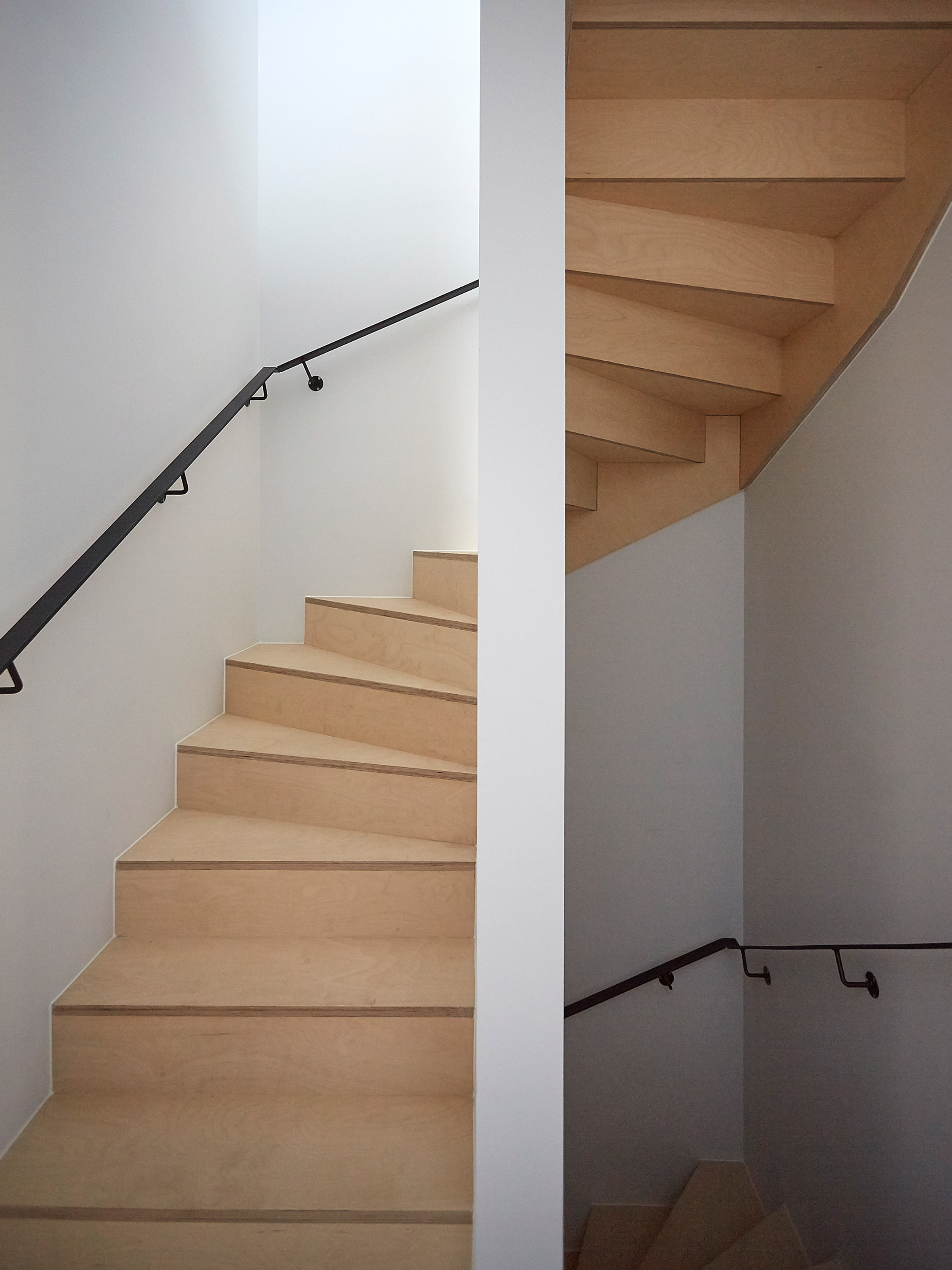 Birch-faced plywood is used for the staircase at the centre of the house, leading to the a second living room on the first floor.

The master bedroom on the other side of this level has a door that opens to a small terrace. 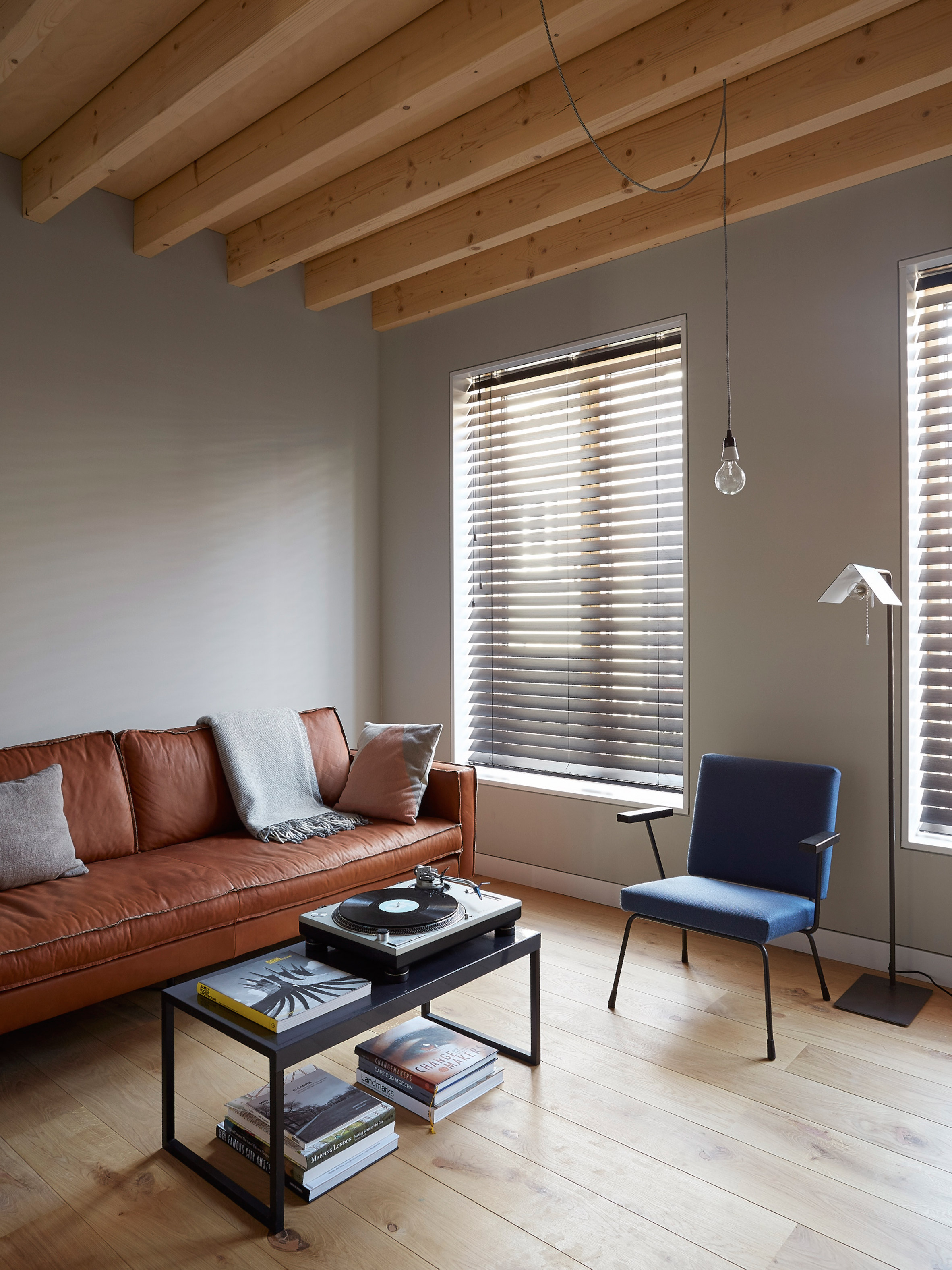 Another two bedrooms are placed in the second floor of the property. The larger of the pair has a skylight and walls lined with plywood.

A bathroom in between the two bedrooms occupies a narrow space in the eaves of the roof. 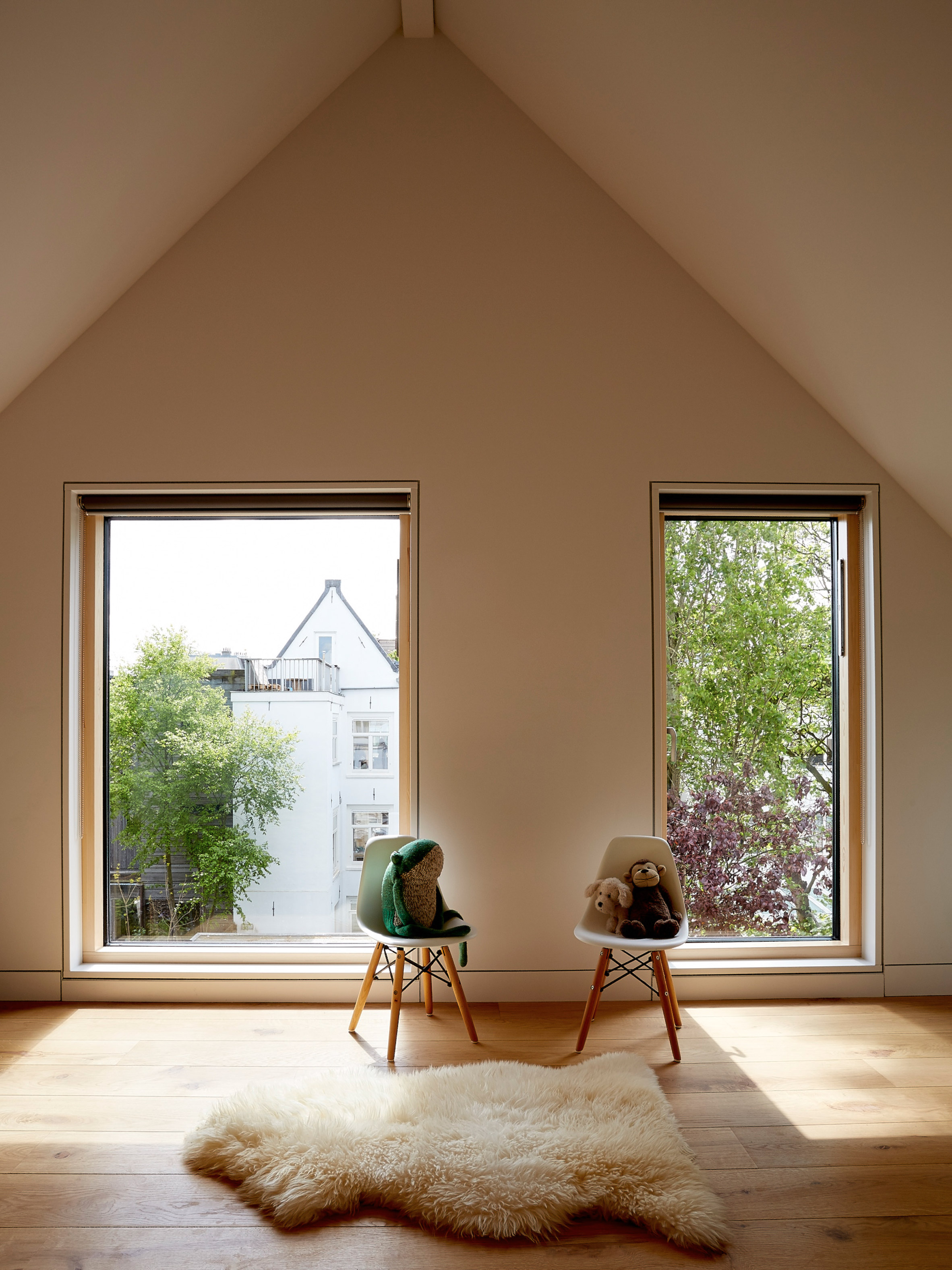 Other recently completed residences in Amsterdam include a wooden townhouse by MAATworks and a prefabricated house by Marc Koehler Architects.

Photography is by Kasia Gatkowska. 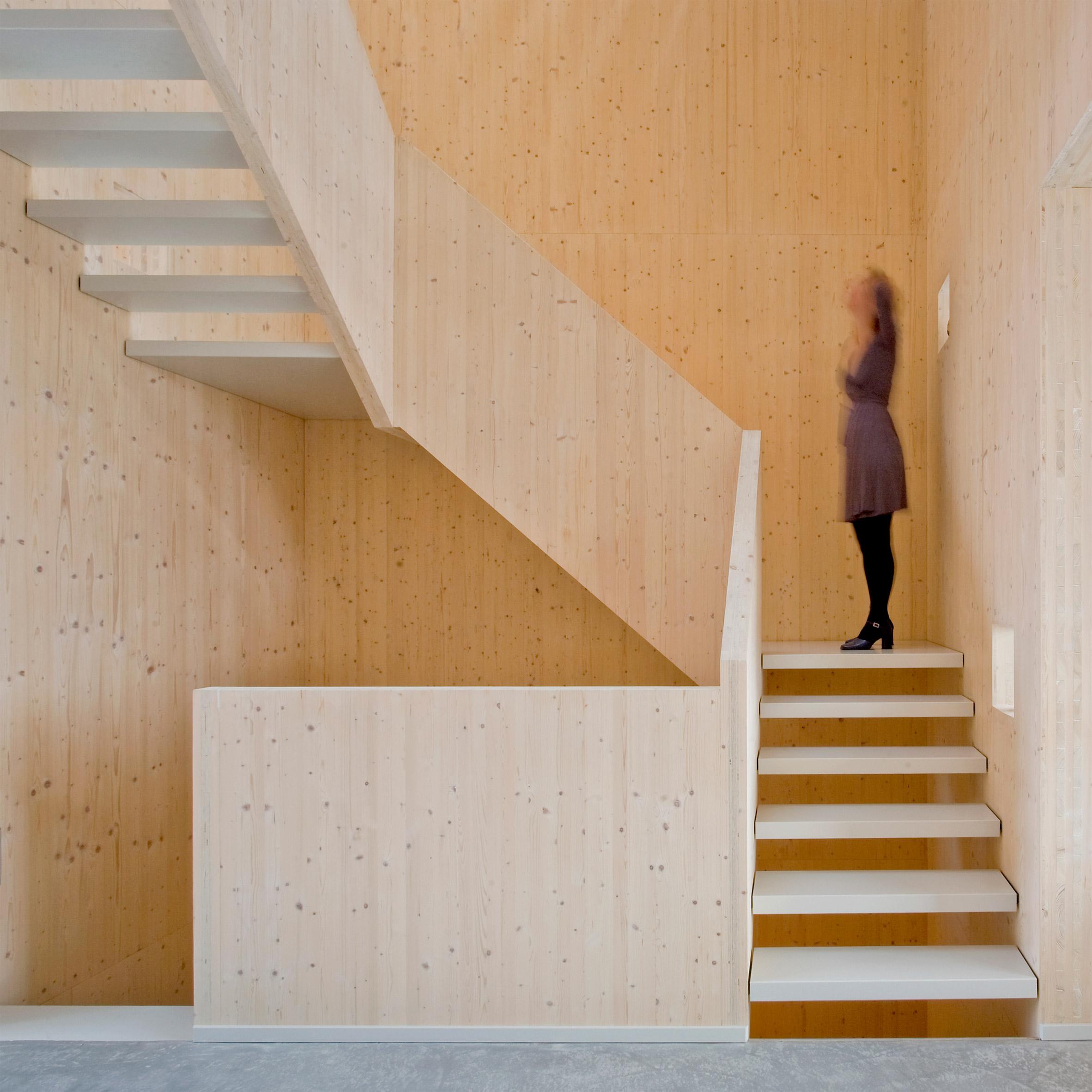