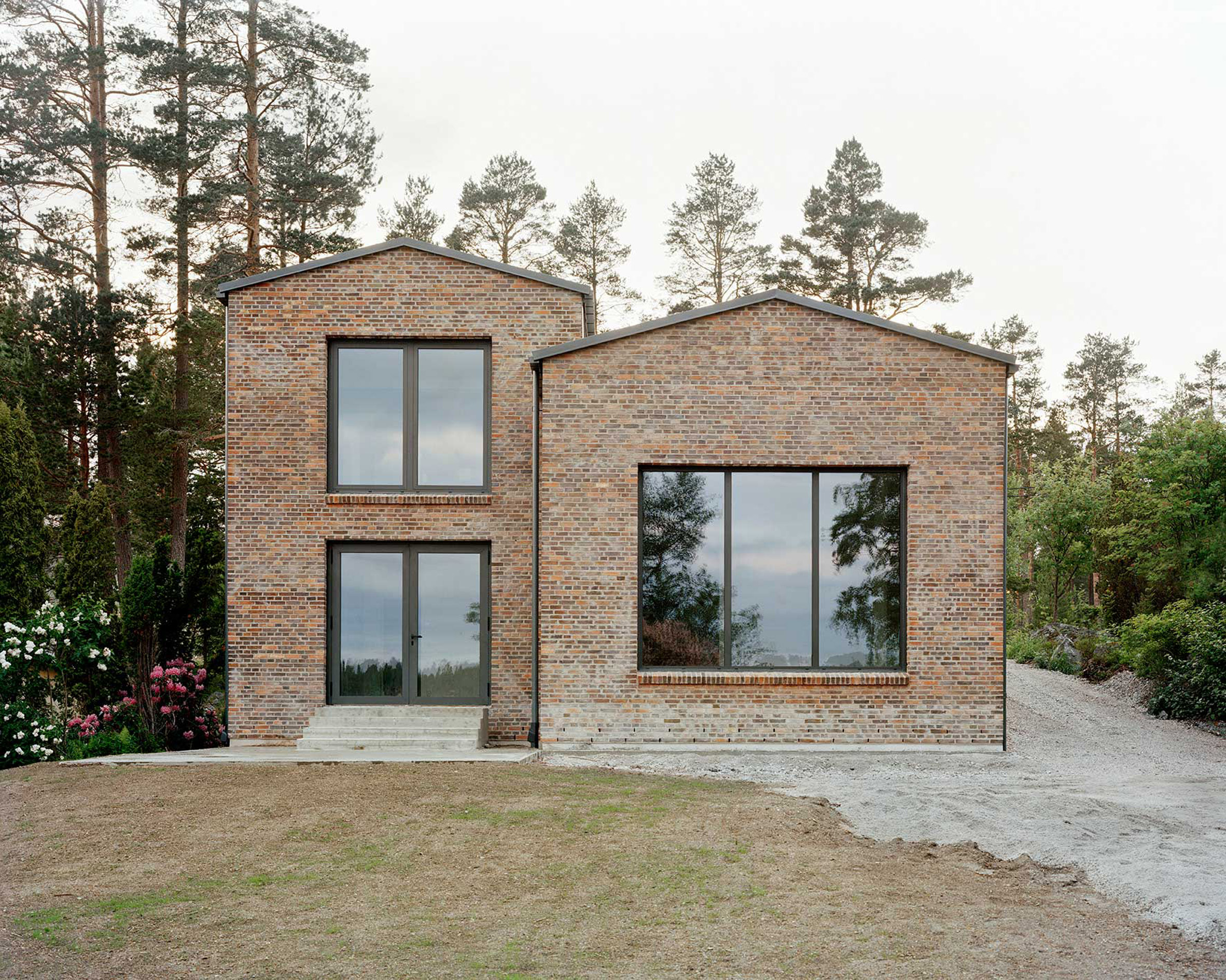 Stockholm-based Hermansson Hiller Lundberg designed House Juniskär for site in the Swedish city that steps down from the higher entrance level to the lower garden at the rear.

To adapt to the incline architects Andreas Hermansson, Andreas Hiller and Samuel Lundberg split the house, made of Danish bricks, into two volumes of different proportions and heights. 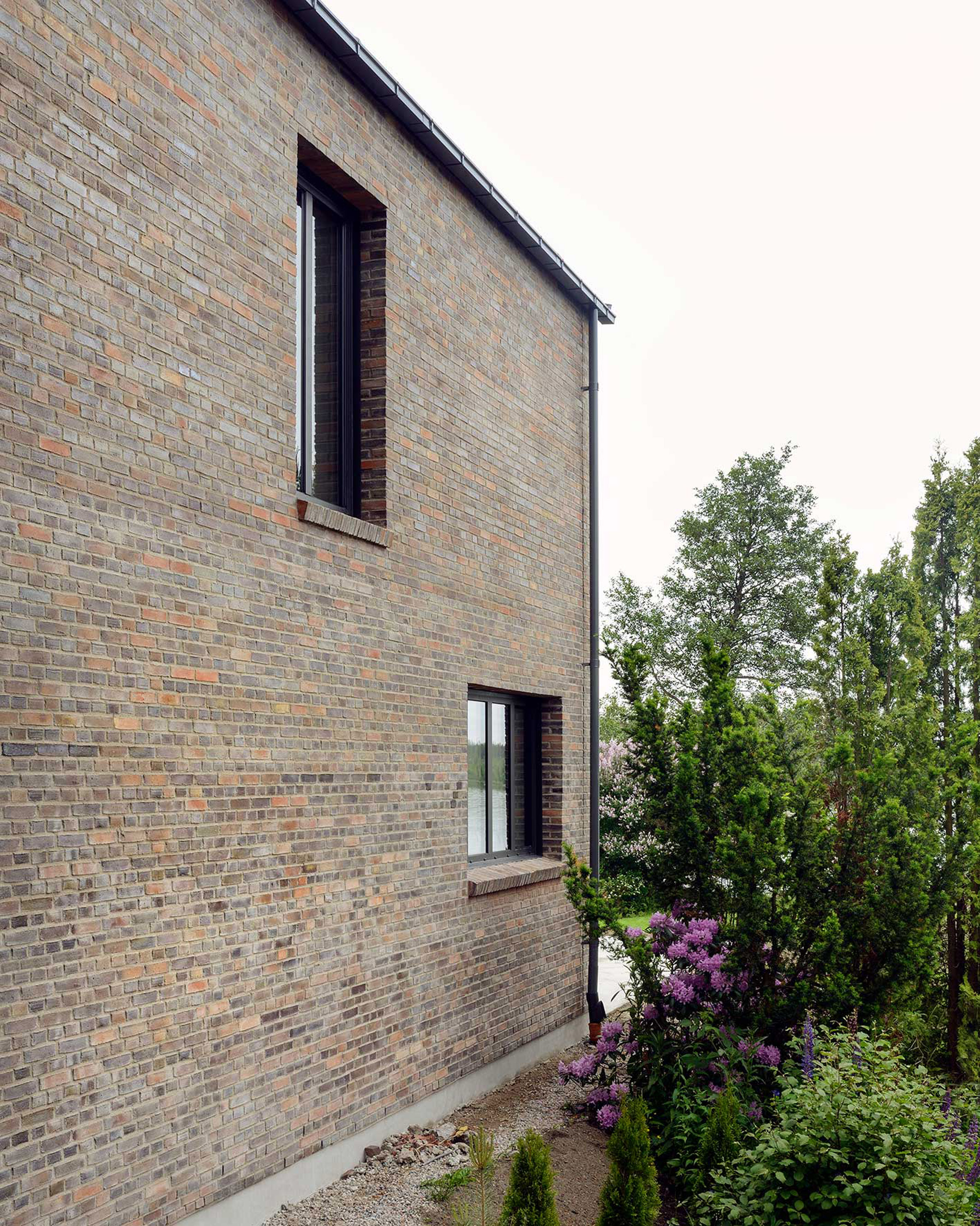 One slots onto the raised level and stretches backwards, increasing in height, while the other two-storey volume is set on the lowest level. 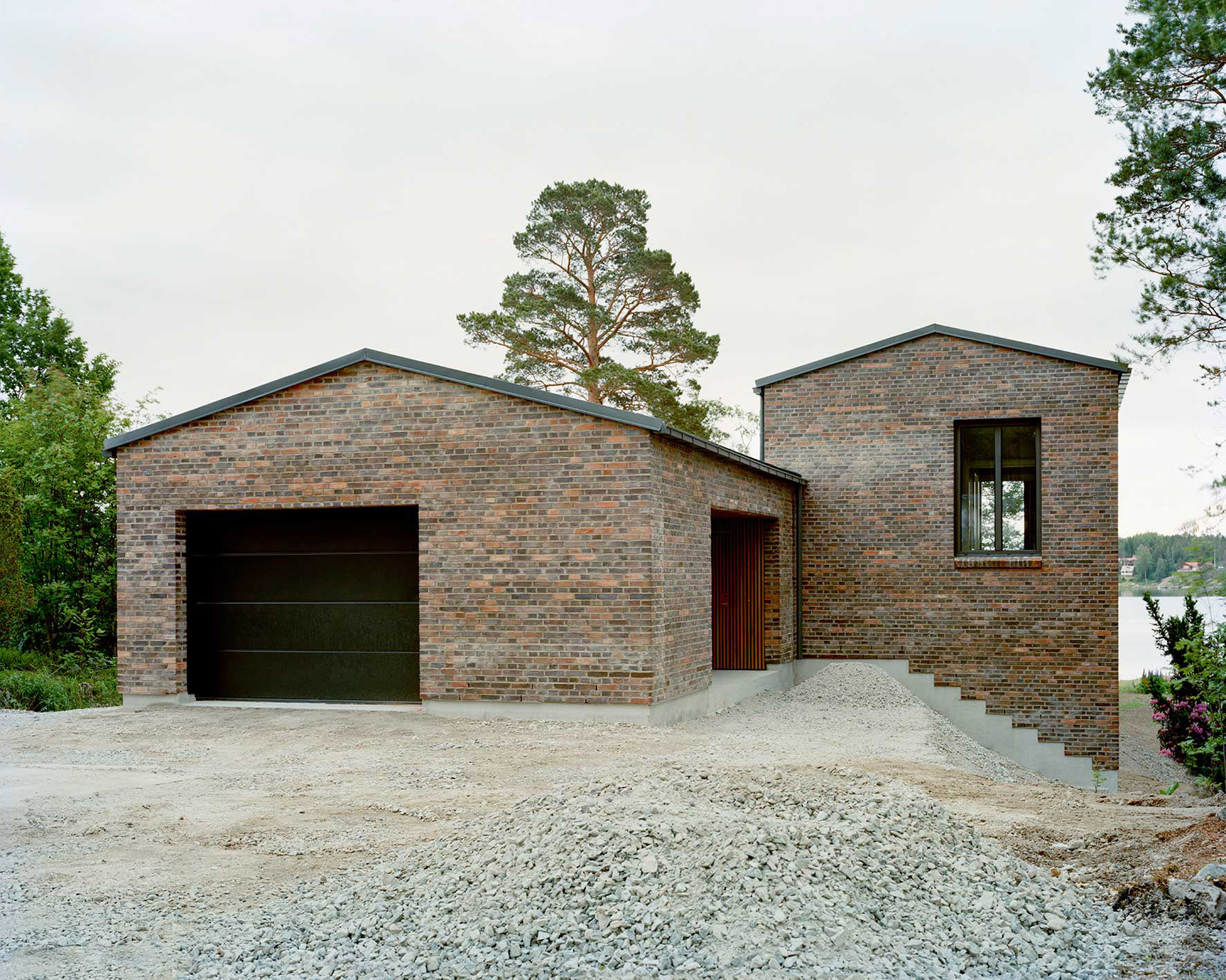 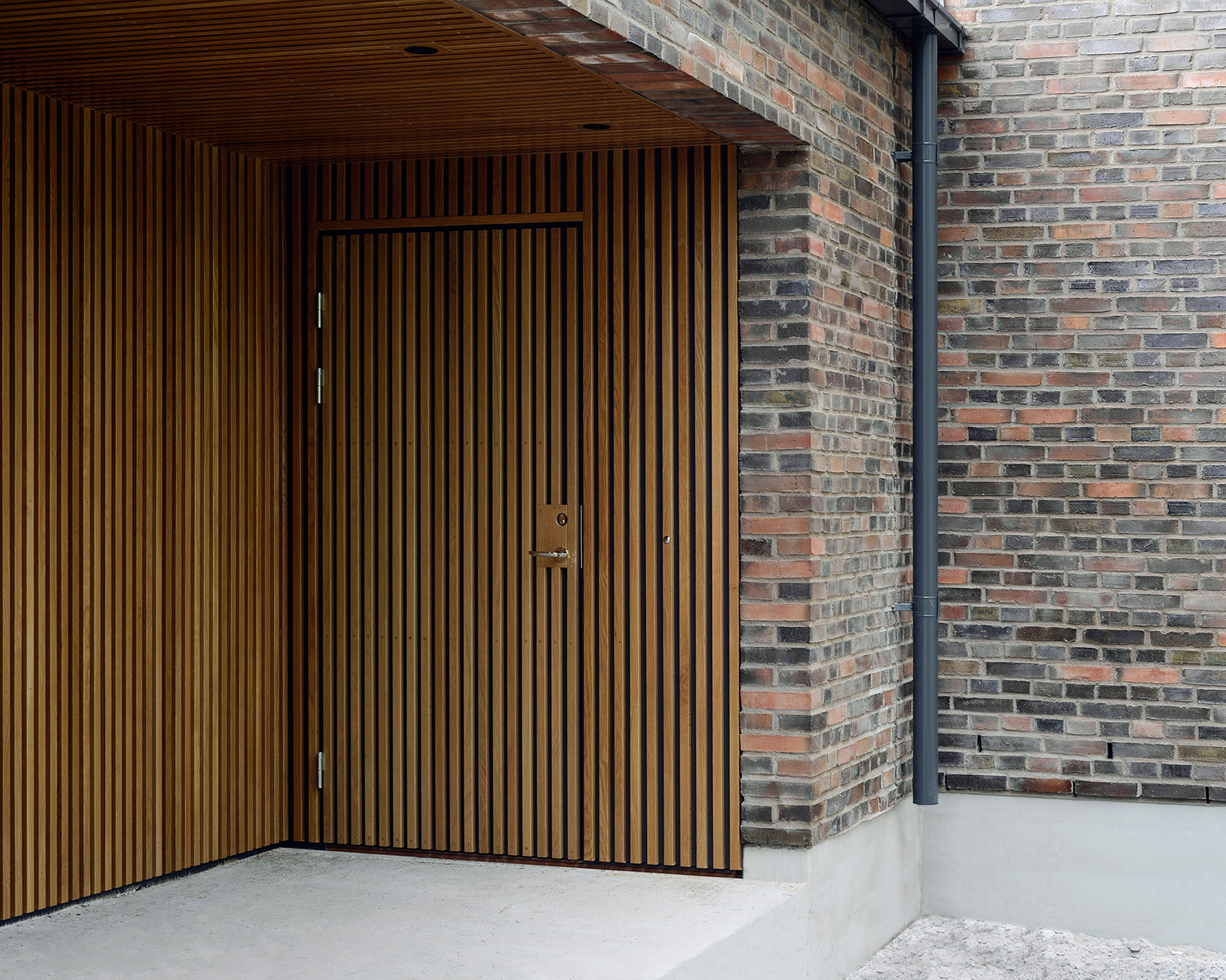 Loos developed the theory in the 1920s as an alternative to traditional stacked floor levels. Instead, it proposed dividing a house’s interior into interconnected multi-level spaces arranged on the basis of their importance.

His ideas have influenced many contemporary buildings, including a Brazilian home made up of geometric blocks and a Spanish property with staggered floor slabs. 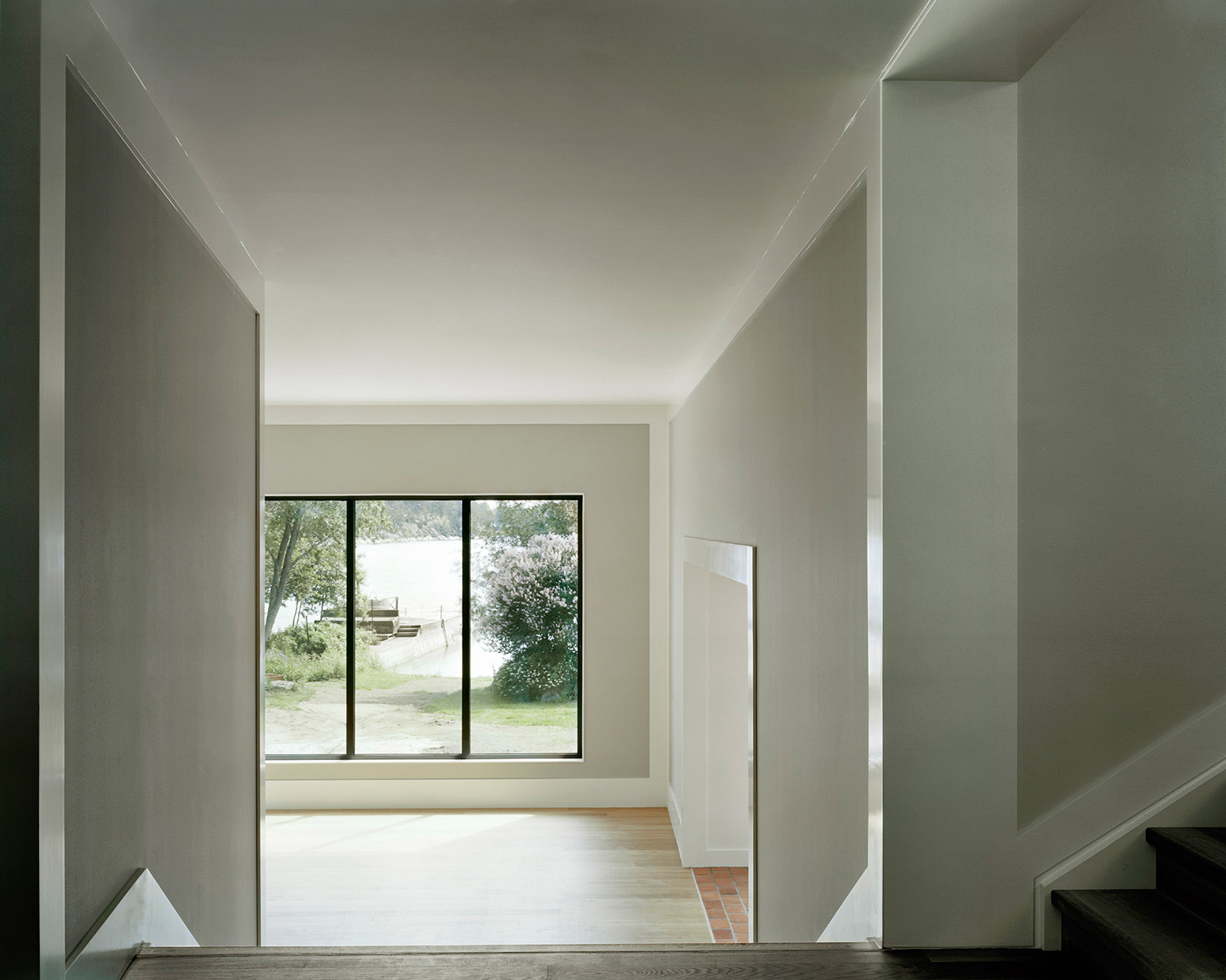 “The house is composed of two clear building volumes with different proportions and heights, which allows for the exterior adaption to the sloping site as well as an interior variety of interlocking spaces or Raumplan,” the firm explained.

“In the interior the spatial sequence turns horizontally and vertically around the large stair that connects all levels.” 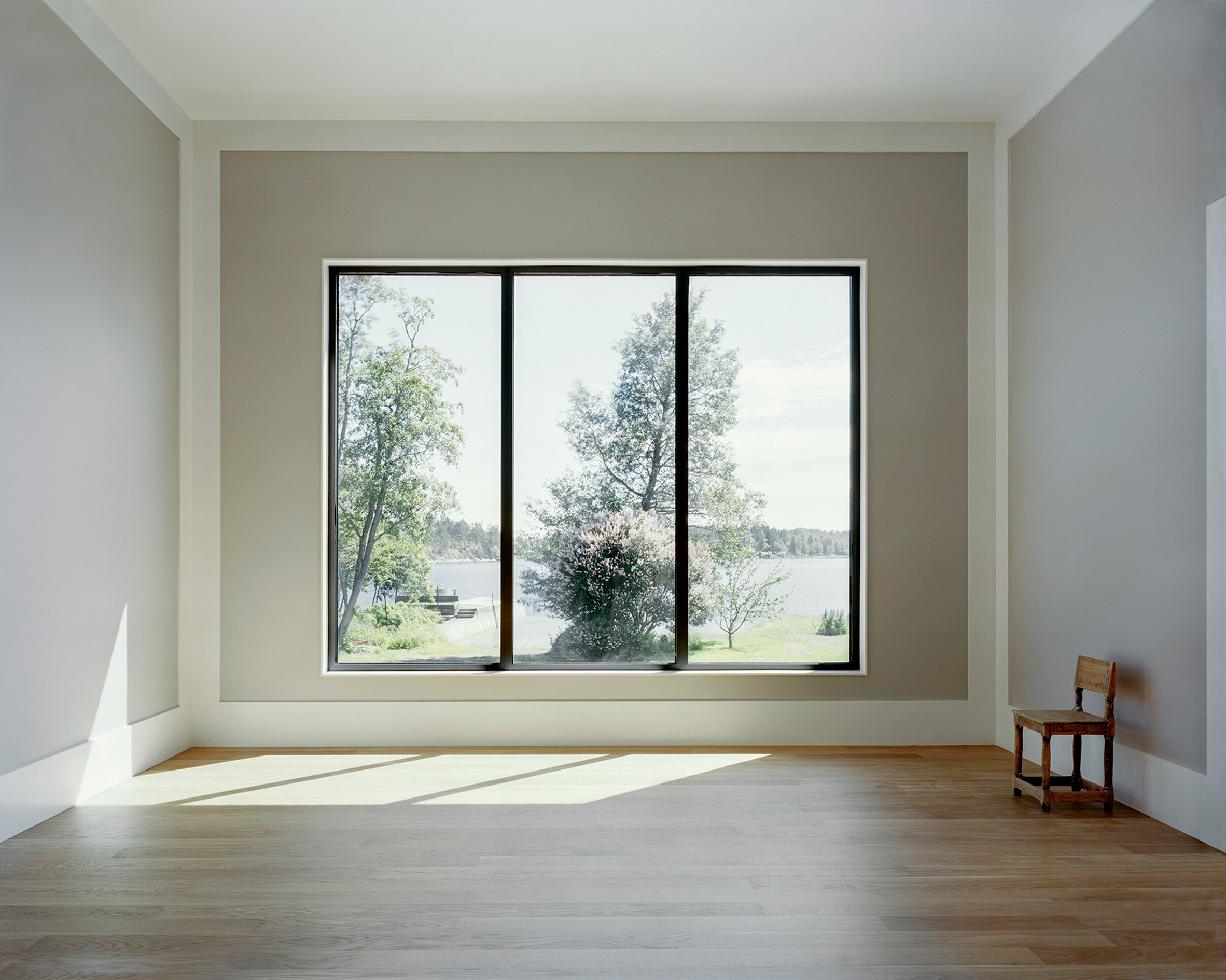 Because of the staggered arrangement of the volumes on the site, the residence has a more regular appearance from the rear than it does from the front.

“The house has a sort of doubleness, or Janus-character, since it is formal and symmetrical towards the garden but informal and plastic toward the entrance side,” said the firm. 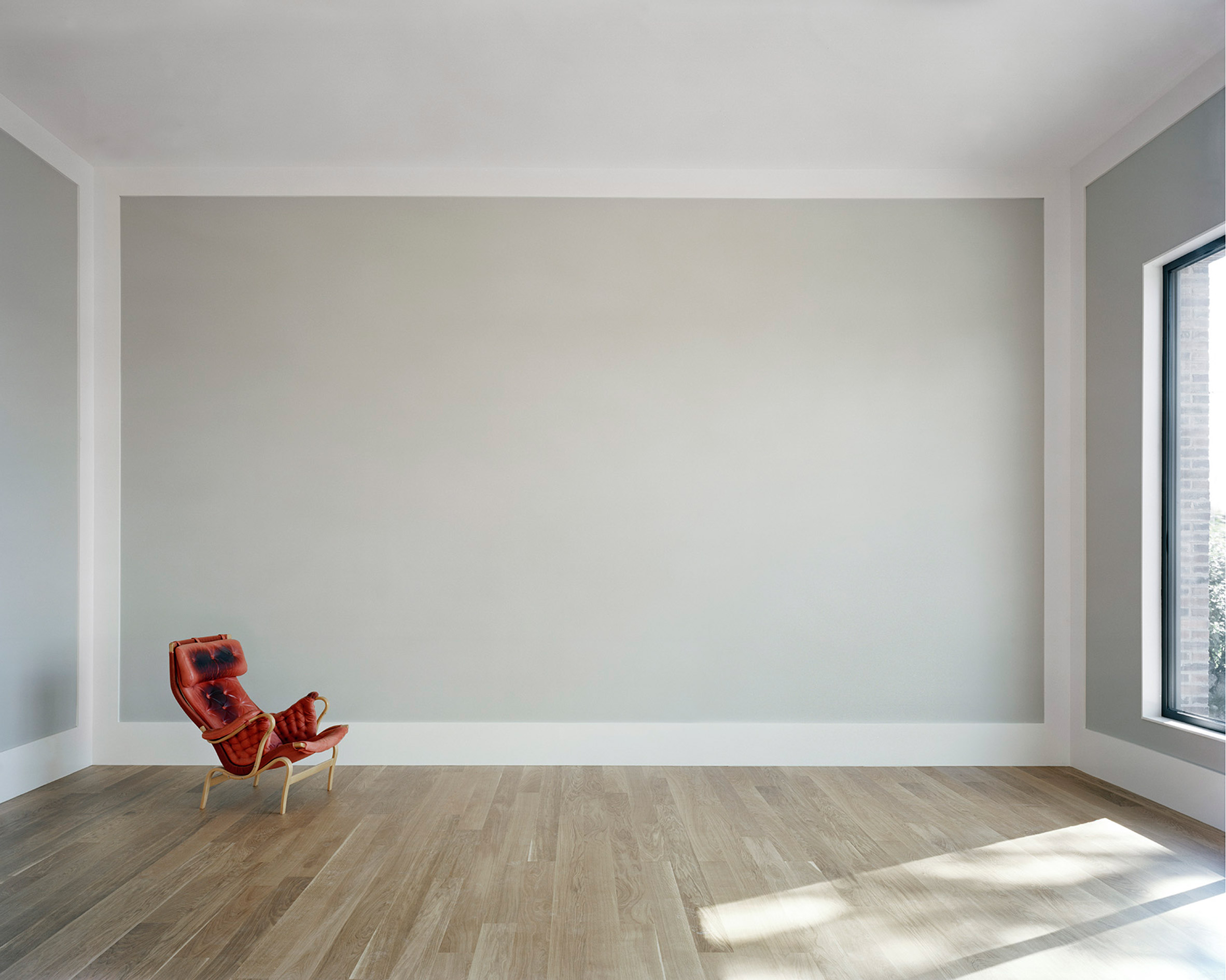 Windows with brick sills are placed in line with English Cross bond bricklaying, which the architects intended to give the house a classic and monolithic appearance.

An inlet on the upper level lined with wooden panels forms a covered entrance to the house, opening onto the single-storey hall. 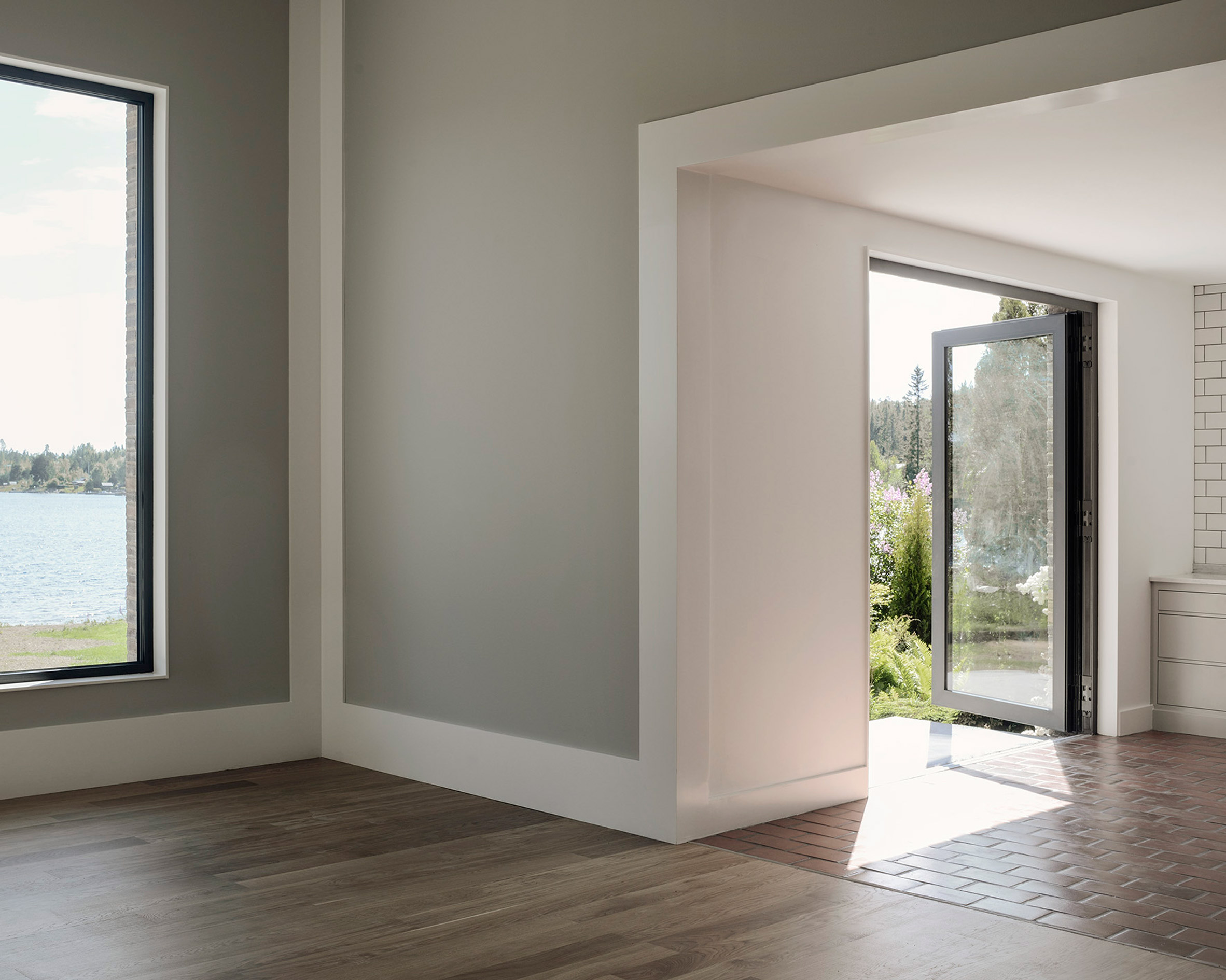 From here, the central stair leads down to a double-height living room where a large window offers views to the garden and water beyond.

An archway opens to the single-storey kitchen next door, which features tiled flooring. Muted grey cupboards line one wall running along to the adjacent utility room and are complemented by a white tile splash back. 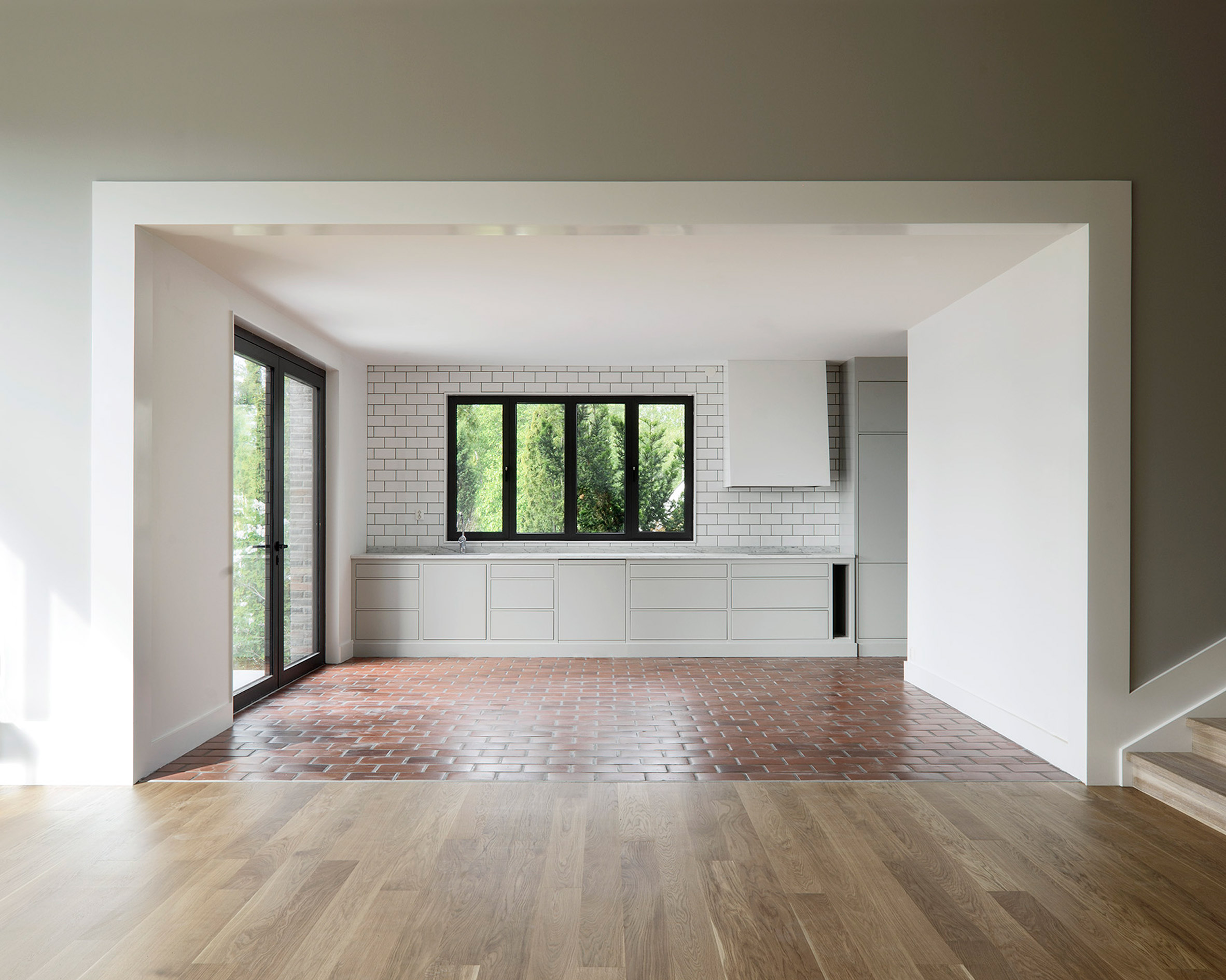 The master bedroom with an ensuite bathroom occupies the first first of the taller block.

The walls in each of the spaces are painted in slight different hues of greys and greens, which the architects intend to create subtle dislocations in the perception of the proportions of the rooms. 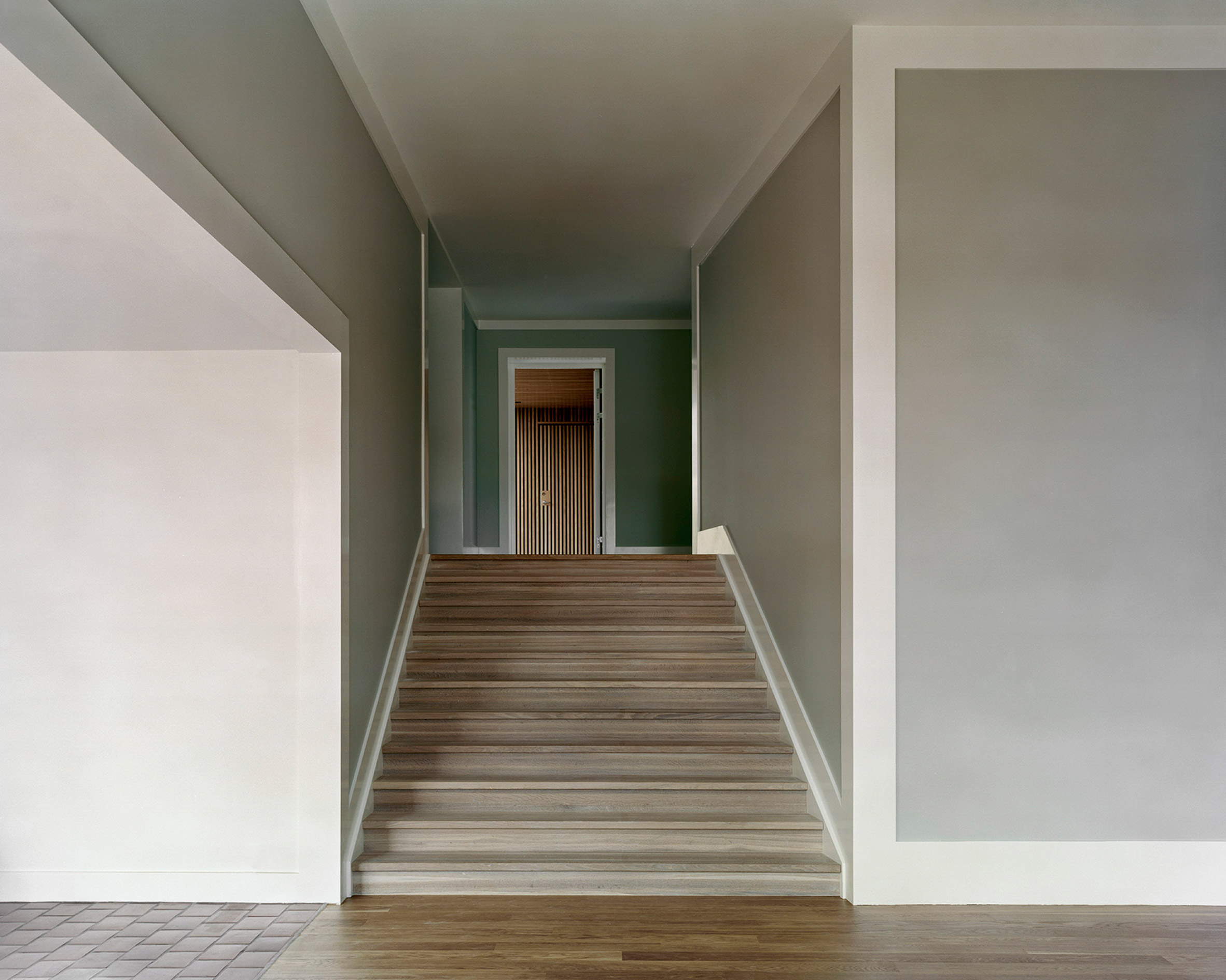 White panels line the corners of each of the rooms, while wooden boards cover the floor throughout the house.

House Juniskär was a finalist at this year’s World Architecture Festival, where winners included Mallorca home made up of four white blocks and a Swedish cultural complex. 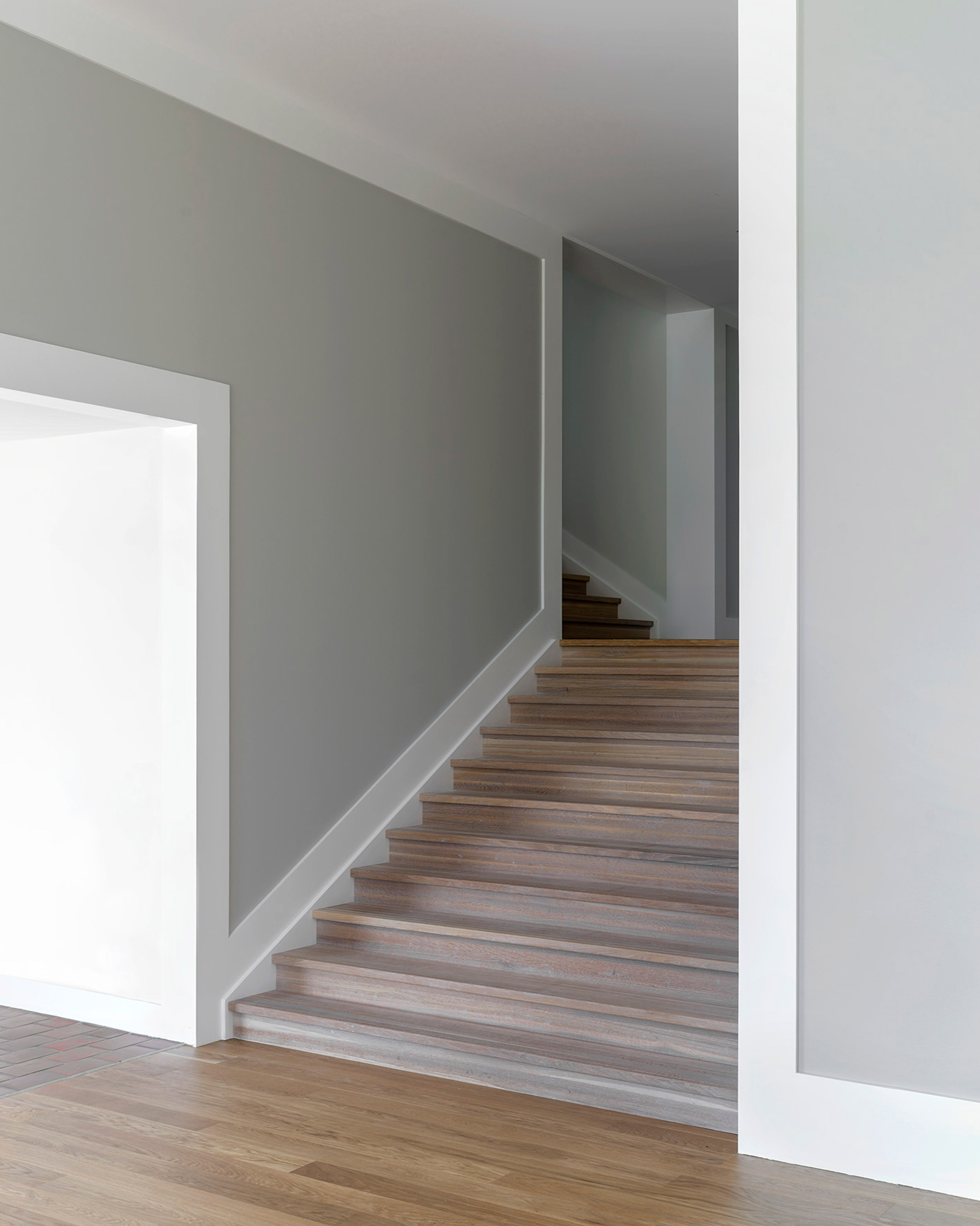 Other projects by Hermansson Hiller Lundberg include a residence near Stockholm that references Classical architecture.

Photography is by Mikael Olsson. 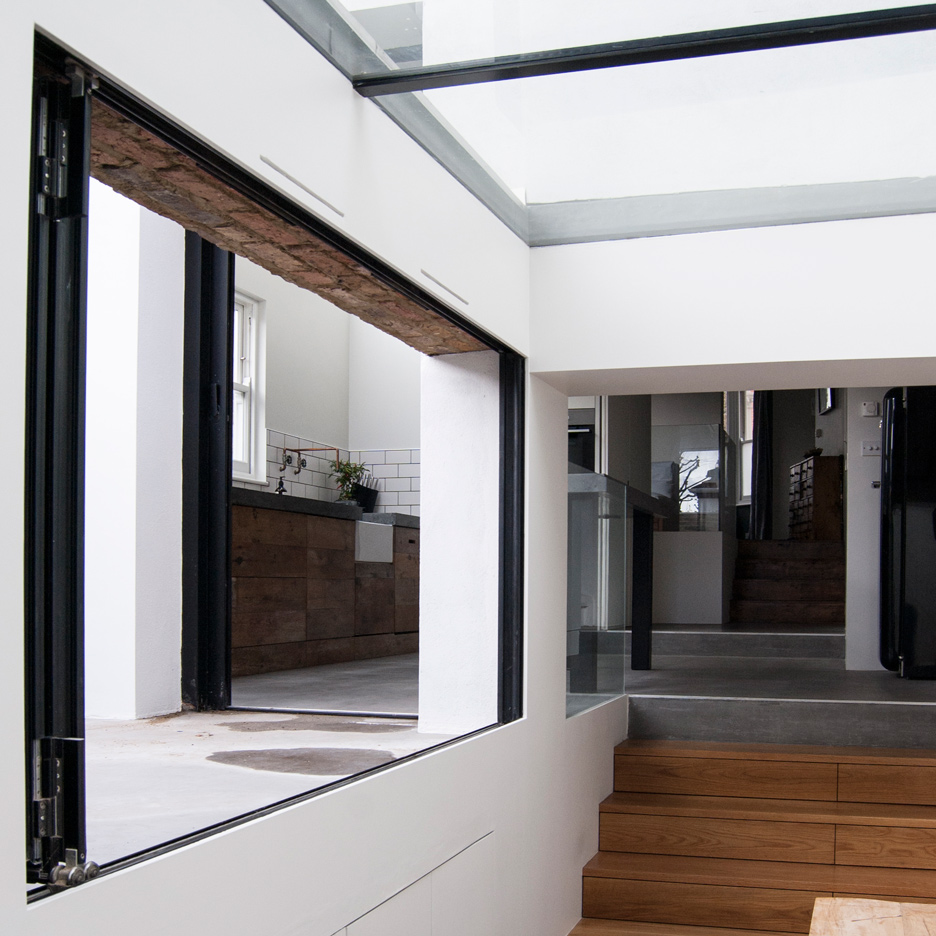