The feature film will follow the relationship between Van der Rohe and his client, Chicago nephrologist Edith Farnsworth, during the design and construction of the glass-box dwelling.

The movie does not yet have a release date, but Bridges is confirmed to play Van der Rohe, while Maggie Gyllenhaal has been chosen for the role of Farnsworth.

The two previously starred together in 2009 drama Crazy Heart, for which Bridges won an Academy Award for Best Actor and Gyllenhaal was nominated for Best Supporting Actress.

Farnsworth – a prominent doctor – commissioned the house in Plano, Illinois, in 1945 as a getaway where she could pursue her hobbies, relax and enjoy nature.

Her relationship with Mies began as friendly, and allegedly romantic, but their partnership soured and resulted in a court battle over construction costs of the house.

Farnsworth House is considered an important example of the international style and one of Van der Rohe’s most revered works – although the only noteworthy house he completed in the US.

The 1,500-square-foot (140-square-metre) home comprises horizontal planes supported by steel columns, with floor-to-ceiling glass forming the external walls. These provide panoramic views of the wooded landscape, and allow visitors to see straight through from one wide to the other.

Completed in 1951, the residence was added to the US National Register of Historic Homes in 2004 and now serves as a museum.

In 2014, preservationists concerned about the risk of flooding proposed a system of hydraulic jacks that would lift the building it into the air.

German-American architect Ludwig Mies van der Rohe, often referred to as Mies, was one of the most significant architects of the 20th century.

Before his death in 1969, he completed a vast array of projects in the international and modernist styles – the most recognisable including the Seagram Building in New York, the 860-880 Lake Shore Drive towers in Chicago, and the Barcelona Pavilion.

The architect’s Neue Nationalgalerie in Berlin is currently undergoing renovation work overseen by David Chipperfield, and is set to be extended by Herzog & de Meuron, while his Martin Luther King Jr Library in Washington DC is due to be overhauled by Mecanoo.

Also, a tower that Mies proposed for London was recently revealed in detail for the first time ahead of an exhibition at the RIBA. 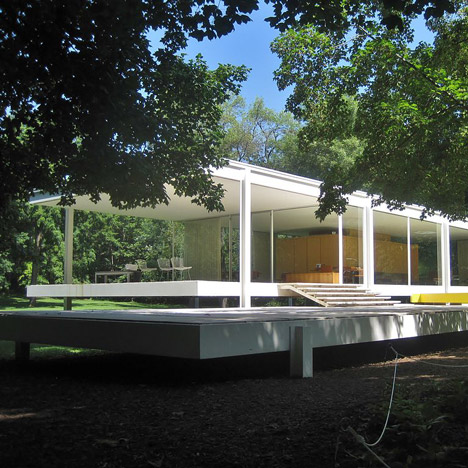