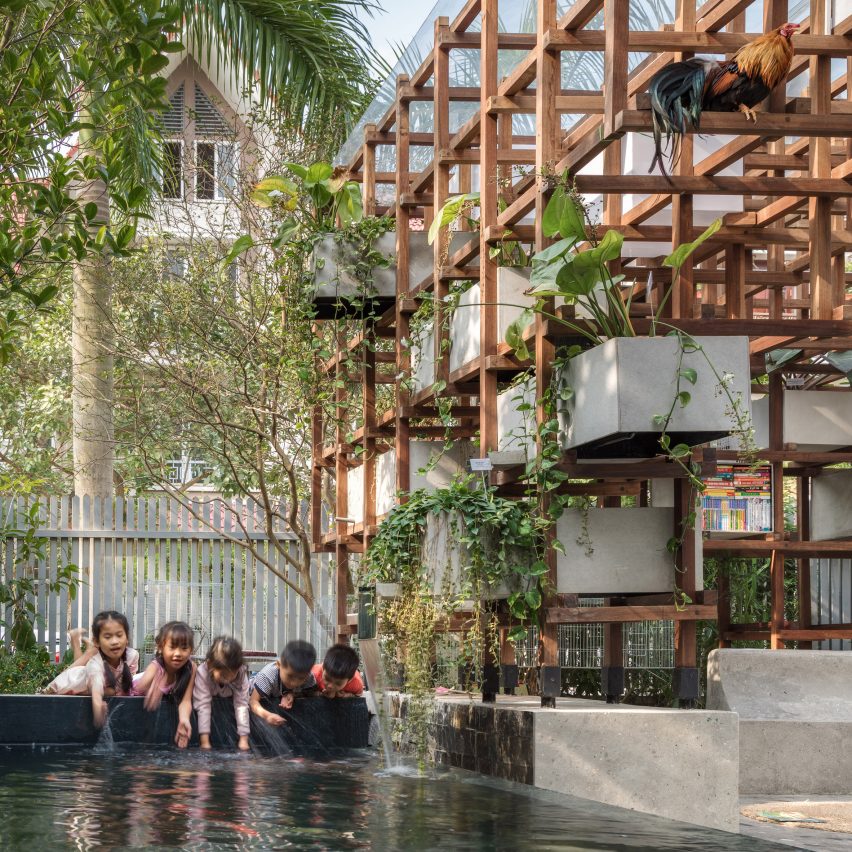 VAC Library by Farming Architects is a large wooden climbing frame that uses solar-powered aquaponics to keep vegetables, koi carp and chickens in Hanoi, Vietnam. Farming Architects designed the library and city farm hybrid as a way for children to learn about self-sustaining ecosystems. Koi carp swim in the pond adjacent to the structure, crossed

The post Climbing frame library in Vietnam has a thriving aquaponics system appeared first on Dezeen.

Industrial finishes “resistant to animal wear and tear” are used across this veterinary clinic, which occupies the ground and basement floors of an extended building in Montreal. Thomas Balaban Architect (TBA) completed the renovation and extension of a two-storey photography studio, turning it into a four-storey structure that houses four apartments and the Hôpital Vétérinaire

This wooden chicken coop, installed in the grounds of summer house in rural Finland, is styled like a miniature log cabin perched above the ground on granite rocks. London-based studio Chan Brisco Architects designed the Kana Talo chicken house for a property on the southern shore of Lake Porovesi, which is located 500 kilometres north

Vietnamese studio Tropical Space has created an elaborate coop that features a network of boxes, platforms and stairs, which can be used by both chickens and children. The coop was commissioned by an elderly couple who wanted to move to the country side and keep chickens. They also wanted their grandchildren to come and visit often, and needed

The post Tropical Space creates playground for chickens and children in Vietnam appeared first on Dezeen.

Architecture studio Alma-nac has built a round-the-clock emergency hospital for pets, which is designed to keep cats and dogs away from each other. The first of its kind in the UK capital, The London Animal Hospital (TLAH) is designed to offer the best possible care for its animal patients, and to create a relaxing environment for the owners and

A pouf packed with plants, a faceted flat-packed hideaway and a big ball of twine are among the shelters that Los Angeles-based architects and designers have created for the city’s stray cats. The 13 outdoor shelters were created as part of the annual Giving Shelter fundraiser for FixNation – for the Architects for Animals charity

Penguins slide and somersault down the sloping rooftops of a popular Aarhus housing complex in this animated movie, created by French film studio 11h45. The film features Isbjerget, also known as The Iceberg, the huge harbour-side housing development completed in 2013 by a team of architects and studios including JDS Architects, CEBRA, SeARCH and Louis Paillard. In the movie, this angular structure

The post “The Iceberg” housing in Aarhus becomes a playground for penguins in new animation appeared first on Dezeen.