The 1 Hotel Brooklyn Bridge in New York was designed to bring the surrounding park into the building, says architect Jonathan Marvel in this movie Dezeen filmed for the AHEAD hospitality awards.

Designed by Marvel Architects, the hotel stands alongside the Brooklyn Bridge Park, with views of the bridge and across the East River to Manhattan. The property has been nominated in seven categories at the AHEAD Americas awards, which will take place in Miami this week.

According to Marvel, 1 Hotel Brooklyn Bridge was designed to seamlessly blend the experience of being in a hotel with that of the surrounding parkland. 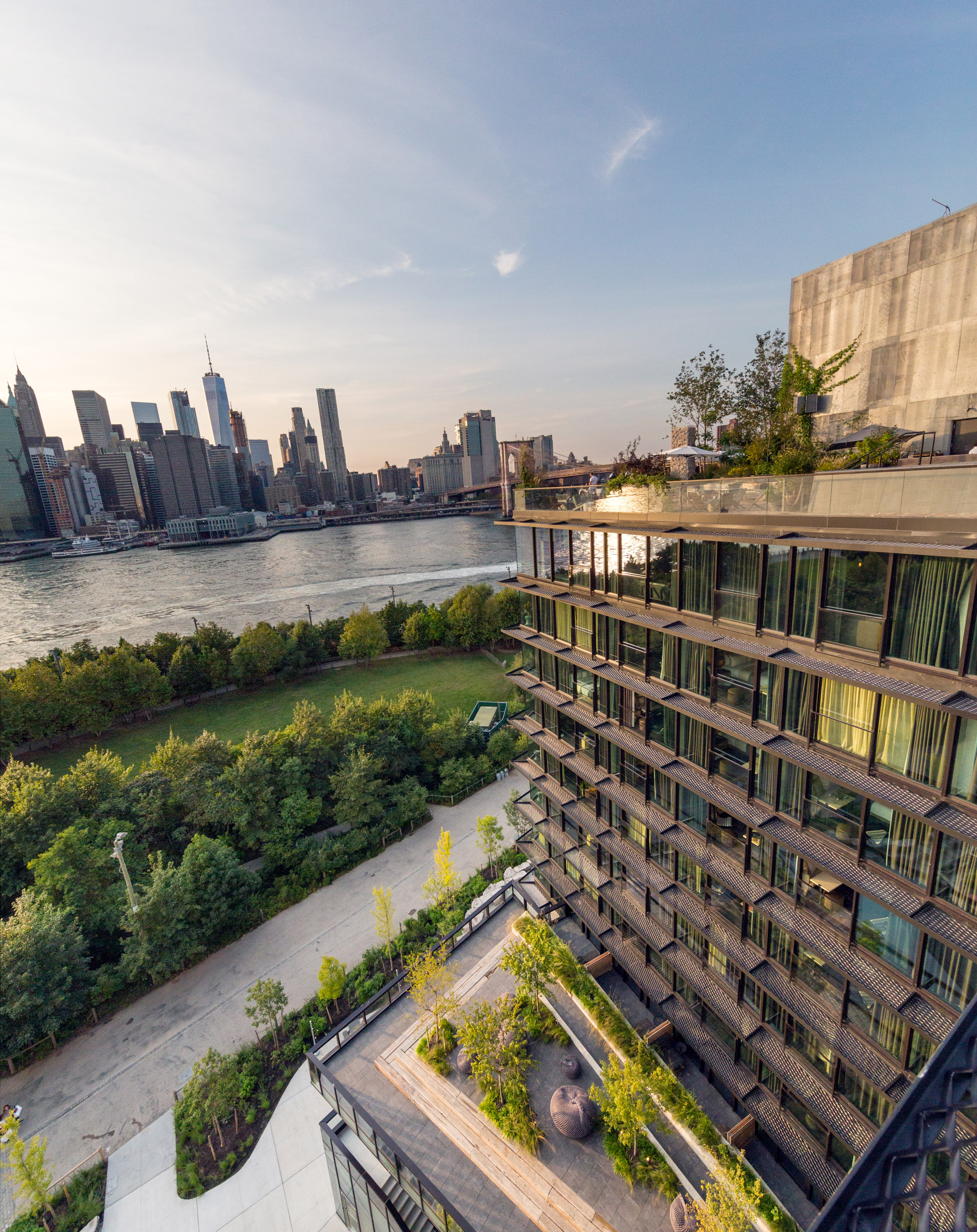 “The hotel had to be designed in a way that allowed you to be part of the park, and everything in the hotel is themed around the park,” says Marvel in the movie, which Dezeen filmed at his New York office.

“There’s a plant in every room. There’s filtered water, there’s no bottled water, so we’re really operating in a sustainable way.” 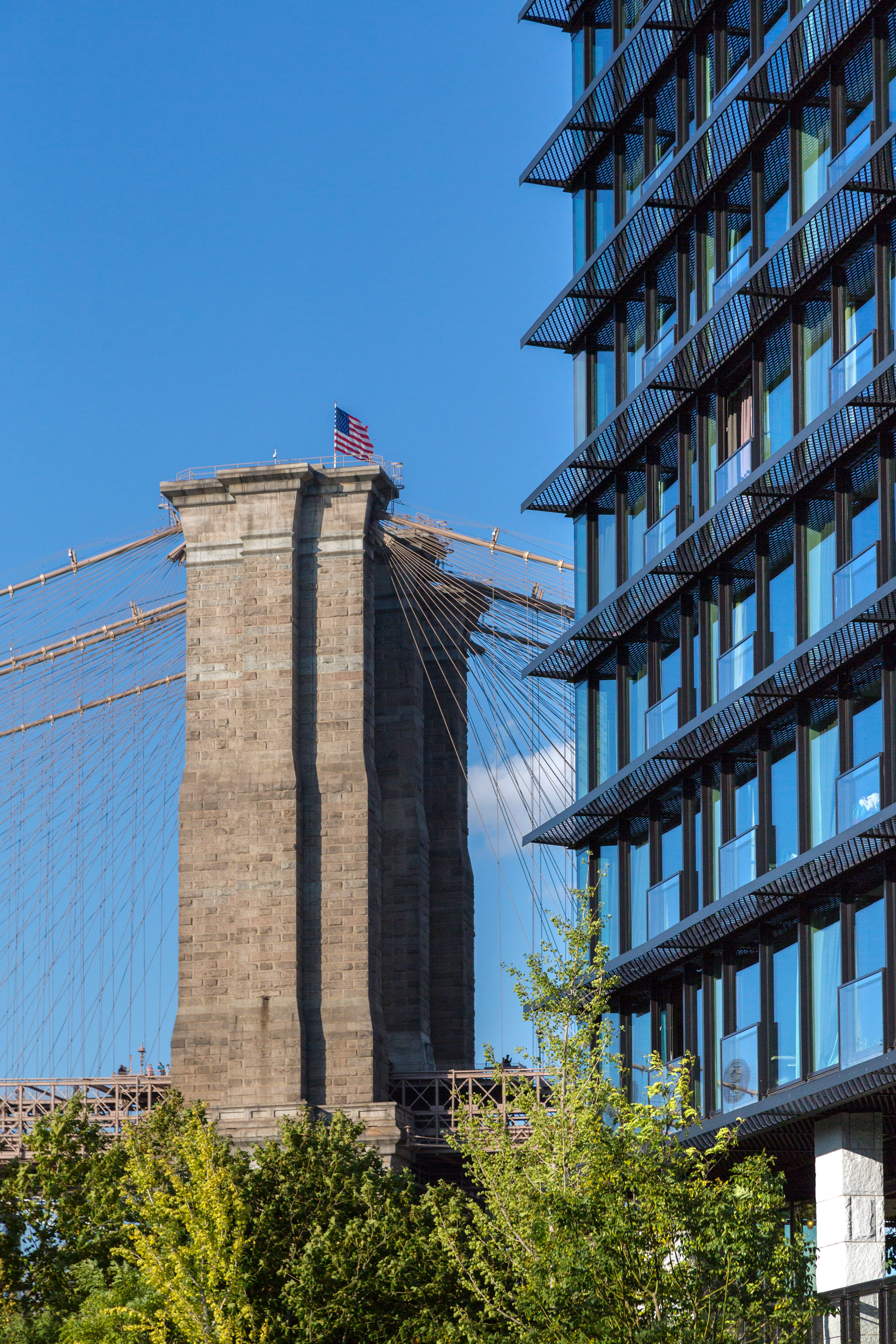 The public areas on the ground floor of the hotel, which secured Marvel a nomination in the AHEAD Awards’ Lobby and Public Spaces category, have been designed to merge indoor and outdoor space.

“We created a big double height space around the perimeter of the building,” explains Marvel. “When you walk in through any of the doorways, you feel like you’re still outside because you’re in a space that’s thirty feet tall.” 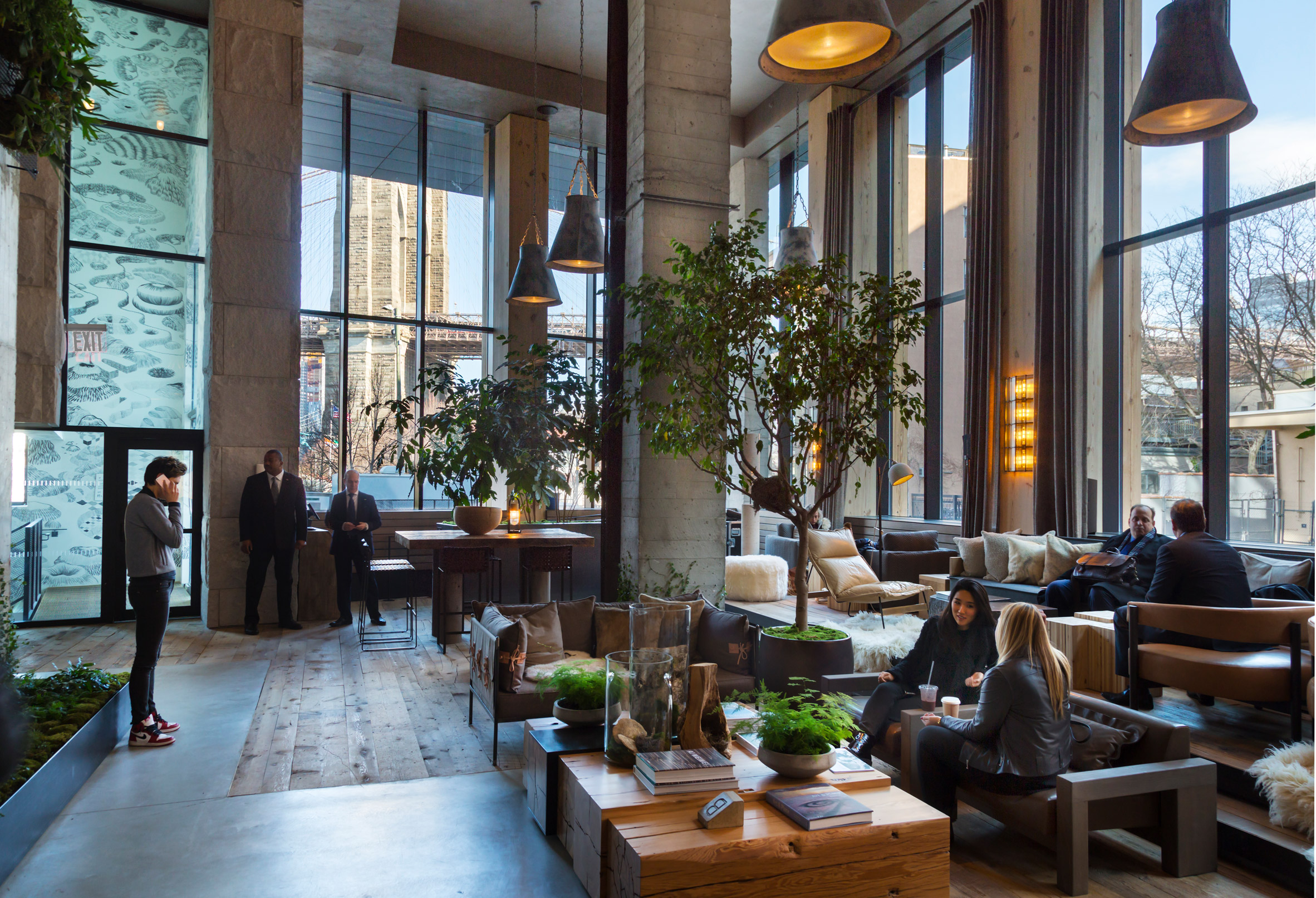 The principle of bringing the park into the hotel was extended to the guestrooms. “When you go to the window you can slide open this amazing glass door and be in the park without actually having a terrace to walk out on,” he says.

The hotel was awarded a further nomination at the AHEAD Awards for an expansive suite, which comes complete a hammock. “The Riverhouse Suite is a very large area on one of the upper floors where you have this striking view of the city,” Marvel explains.

“There are no walls, and we’re really trying to bring the visitor into that harbour-front experience as much as possible.” 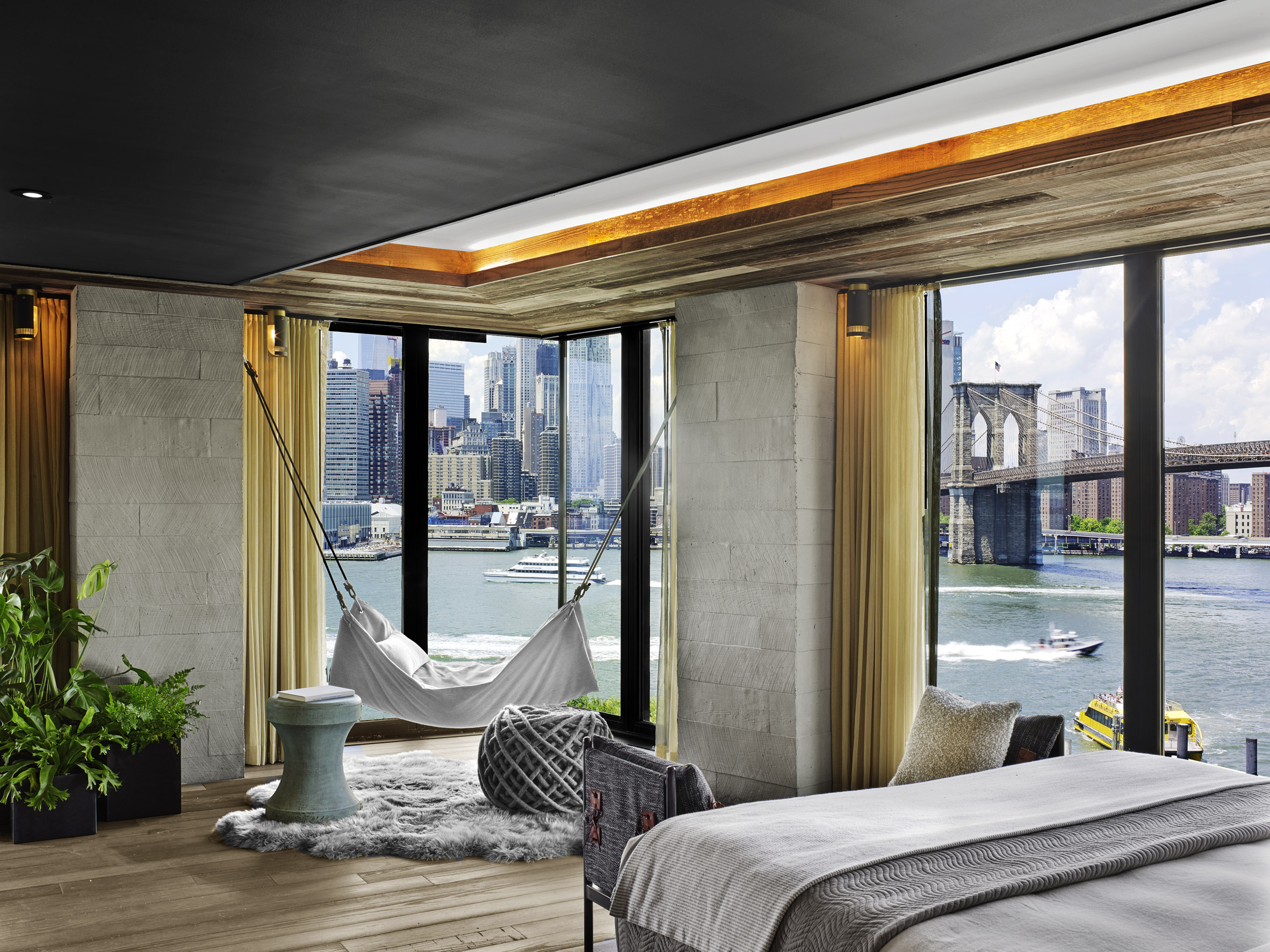 The materials that were used to construct the hotel reference Brooklyn’s history of waterfront industry.

“We wanted the building to feel like it was part of the industrial warehouse aesthetic of the working waterfront,”continues Marvel. “We wanted to bring that kind of ruggedness and no-nonsense to the aesthetics of the hotel.” 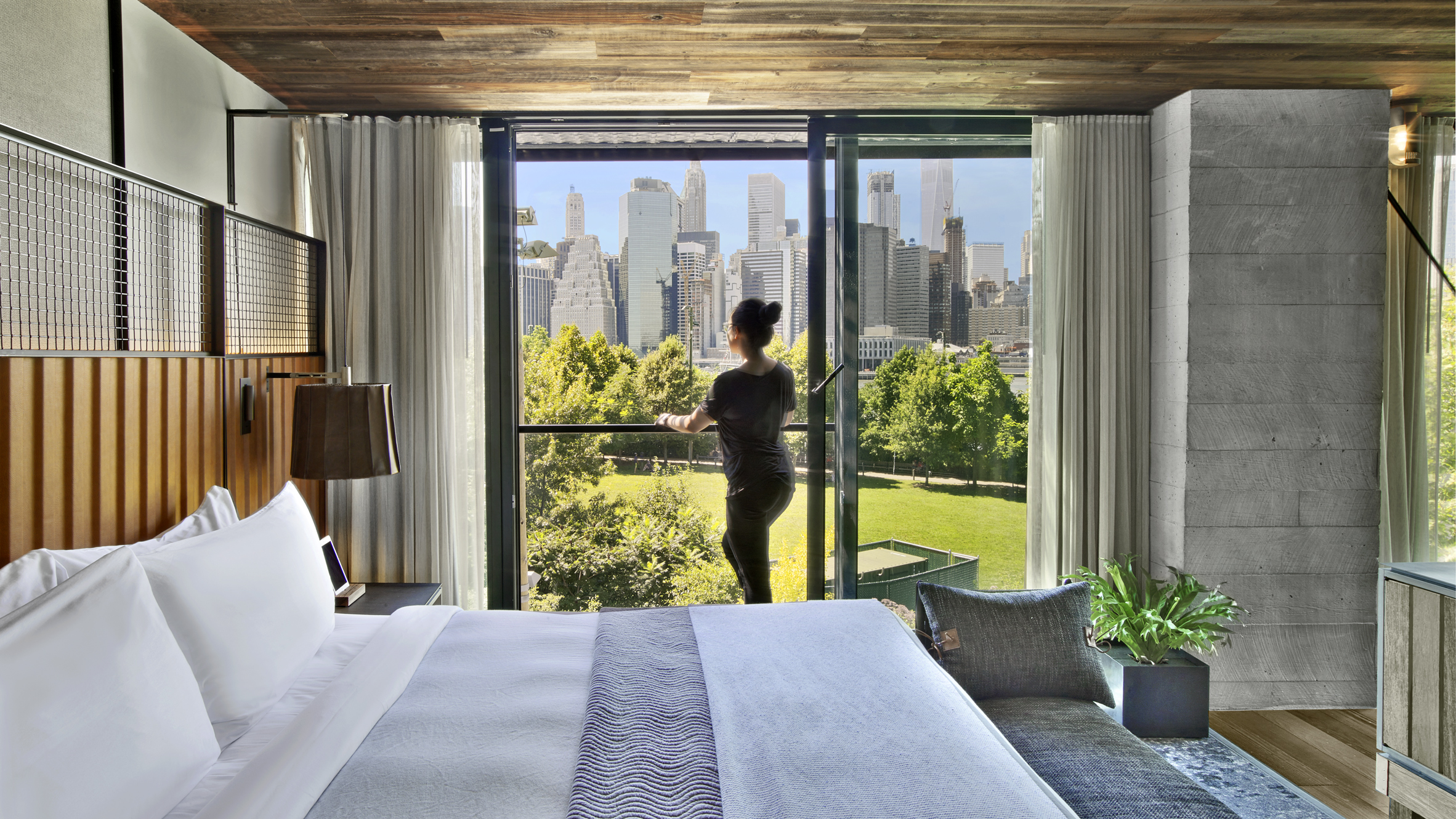 Hurricane Sandy, which struck New York in 2012, also had an impact on the design of the building.

“The levels of flooding in this area created an untenable and uninsurable situation the way we’d designed it, so we had to pick the whole building up five feet,” Marvel explains.

“In doing that, we really created an elevated plaza that didn’t exist in the previous design,” he continues.

“We created new ramps and stairs, and we had to pick up all of the boilers and create these bulkheads on the roof, because what normally would have been underground now had to be raised above ground.” 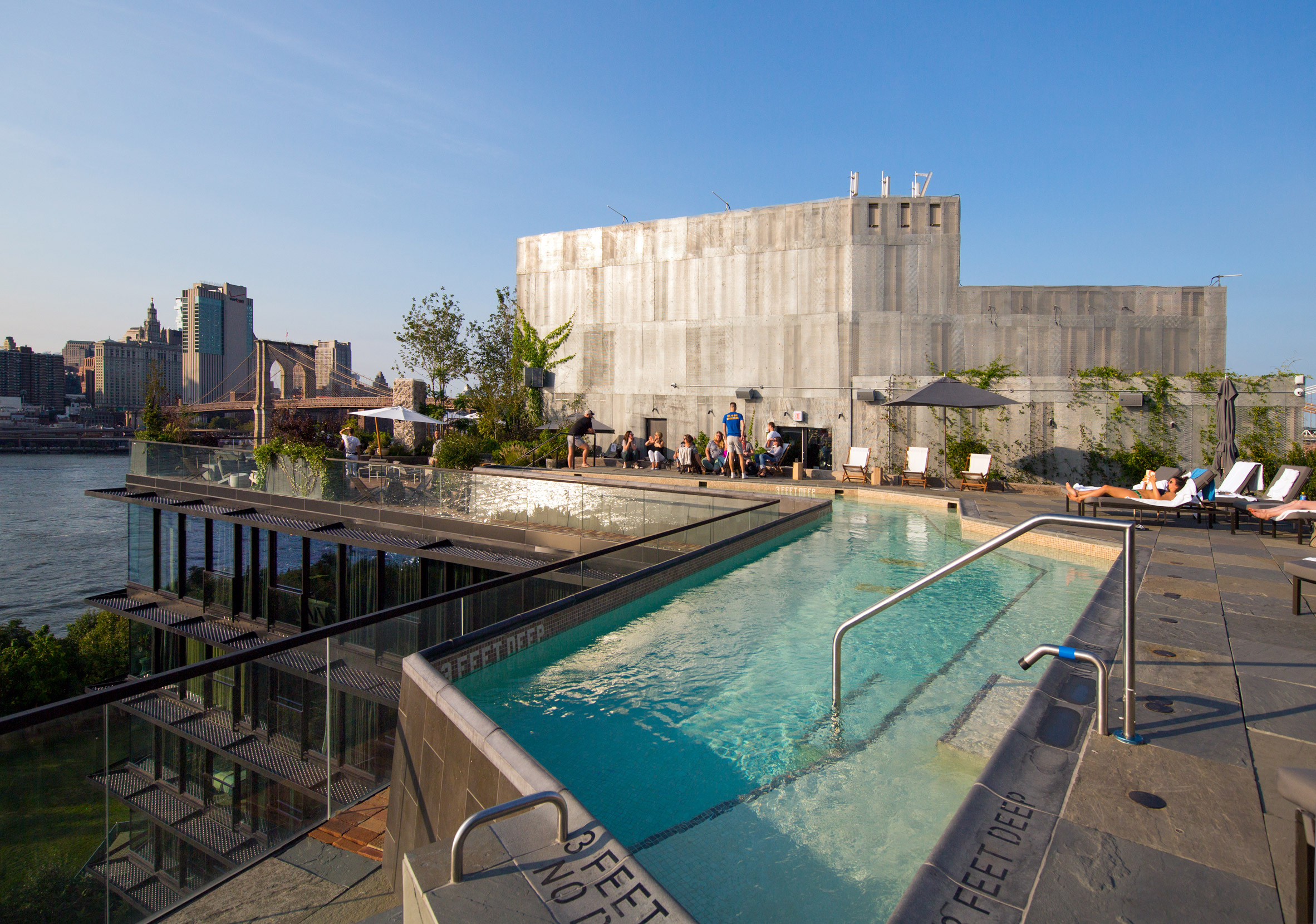 A notable element of the hotel’s design is a rooftop terrace with panoramic views of New York, which incorporates a bar and a swimming pool.

“We’ve created different pockets of areas around the roof itself,” says Marvel. “You have a very noisy side facing the Brooklyn Bridge, you have the dramatic side facing the New York City skyline, and then you have a quieter side where the pool is.”

The Hotel is attached to a neighbouring residential building called the Pierhouse, which Marvel Architects also designed as part of the same development. By mixing residential use and hospitality on the same site, Marvel hopes to foster interactions between locals and visitors.

“Hotels are not just a place for people to stay – they really act as the community’s living room,” states Marvel. 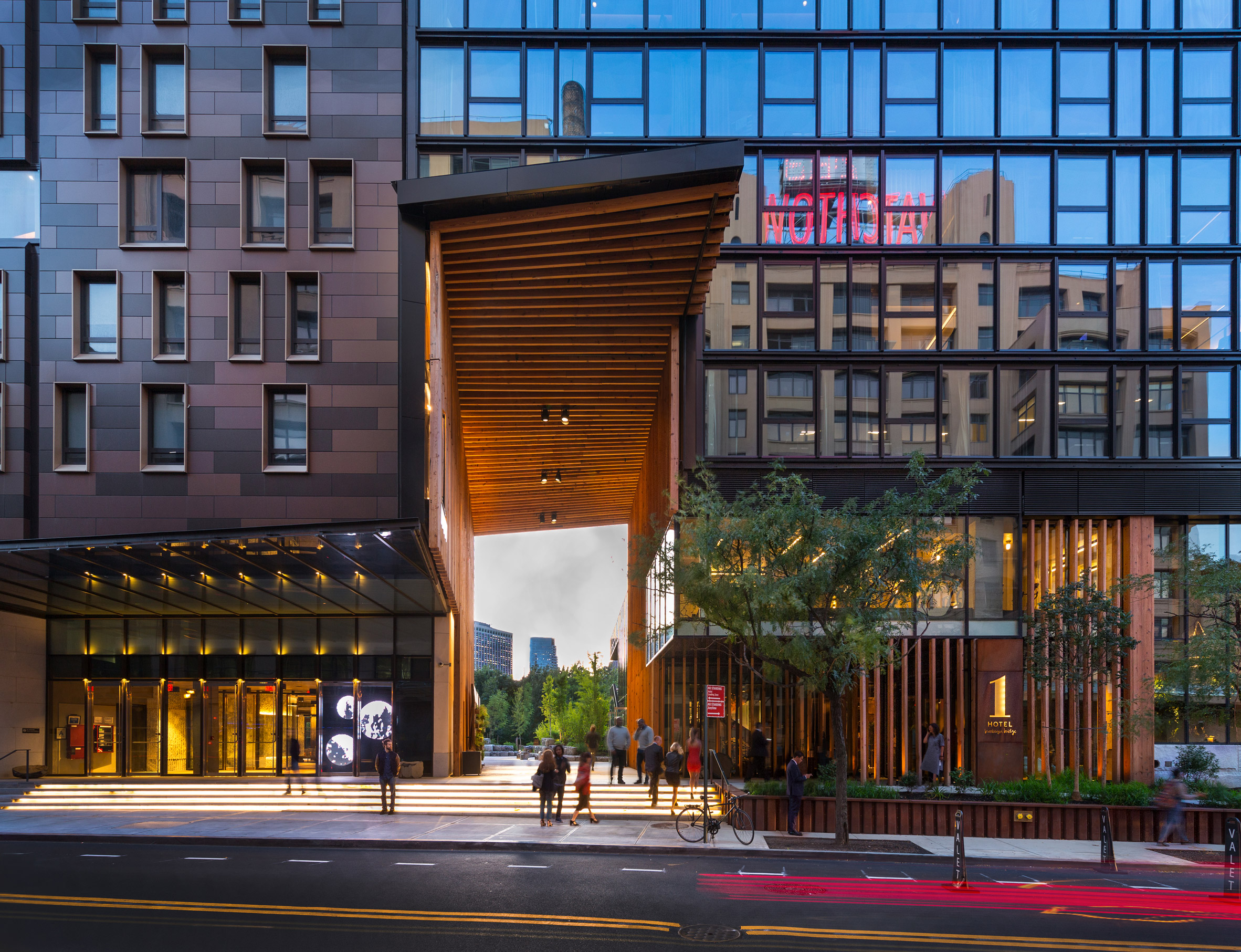 1 Hotel Brooklyn Bridge is the most-nominated hotel for the upcoming 2018 AHEAD Americas hospitality awards, which take place in Miami next week.

It is up for prizes in the Bar, Club or Lounge, Guestrooms, Landscaping and Outdoor Spaces, Lobby and Public Spaces, Spa and Wellness, Suite and Urban Hotel – New Build categories.

This movie was filmed at Marvel Architects’ office in New York for the AHEAD Awards. All photography is courtesy of 1 Hotel Brooklyn Bridge.

The post 1 Hotel Brooklyn Bridge designed “to be part of the park,” says Jonathan Marvel appeared first on Dezeen.