British architect David Adjaye has spoken about the design decisions behind his textured concrete skyscraper for Manhattan, as more details and renderings of the project are released. 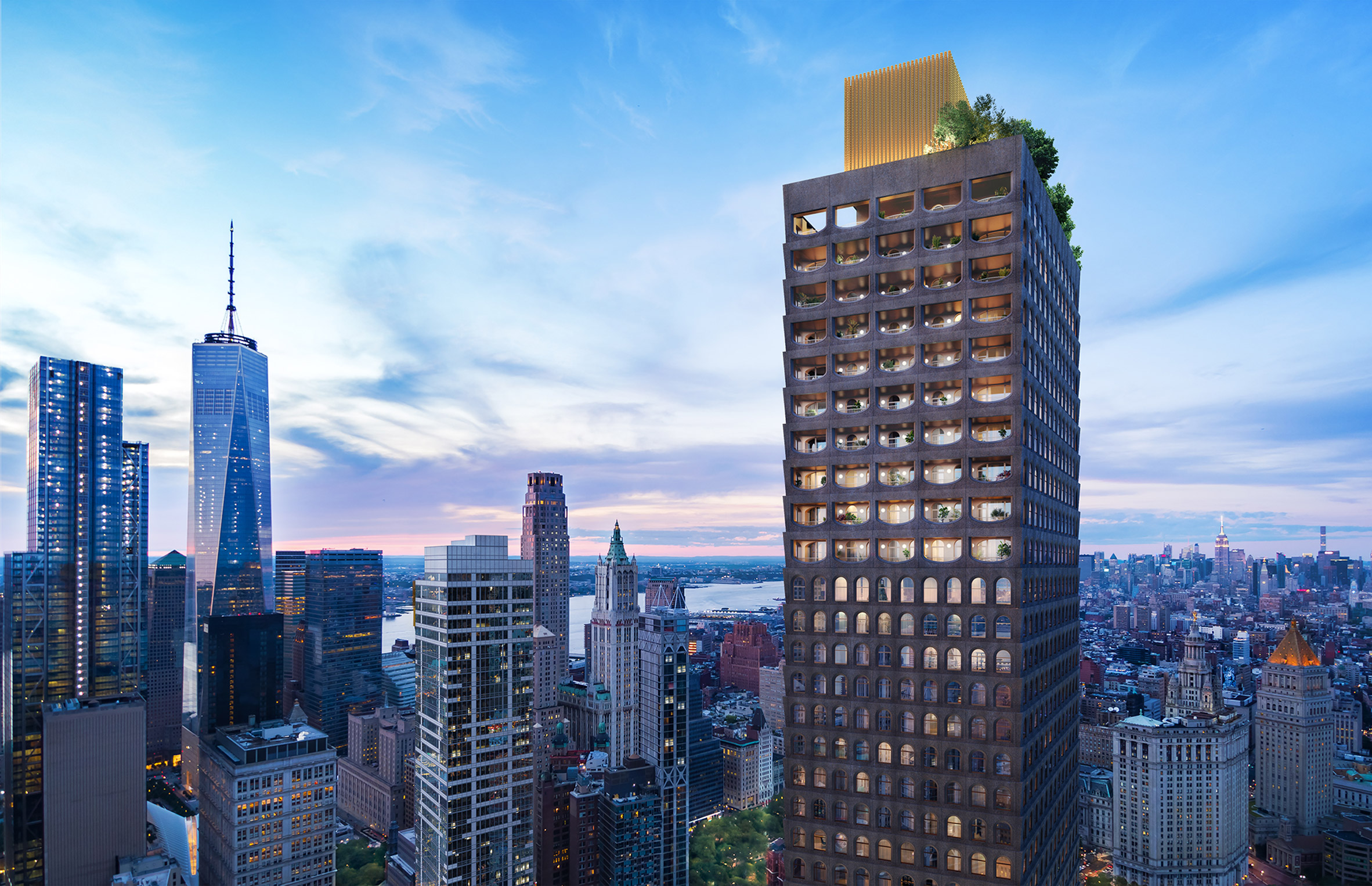 Located at 130 William Street, the residential tower will feature facades textured with lumpy hand-cast concrete all the way up to its peak. 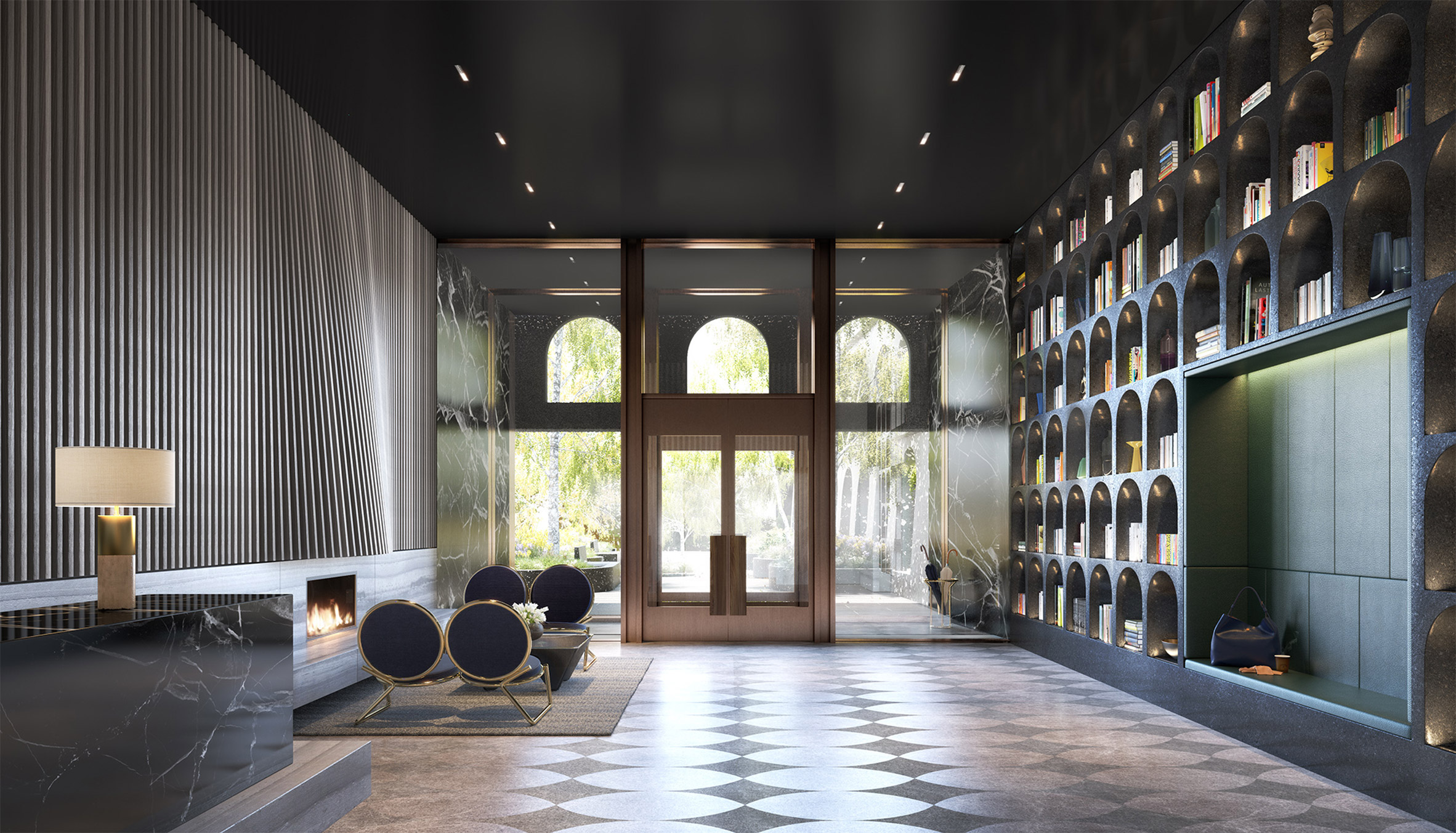 This will make the high-rise perfect for drone photography – which could capture close-up images of the material even close to the top – and for avian wildlife to cling to, according to the architect.

“The building all the way to the top is going to be great for drones and birds,” Adjaye told a group of journalists during the opening of a sales gallery for the project at 19 Beekman Street, on 18 June 2018. 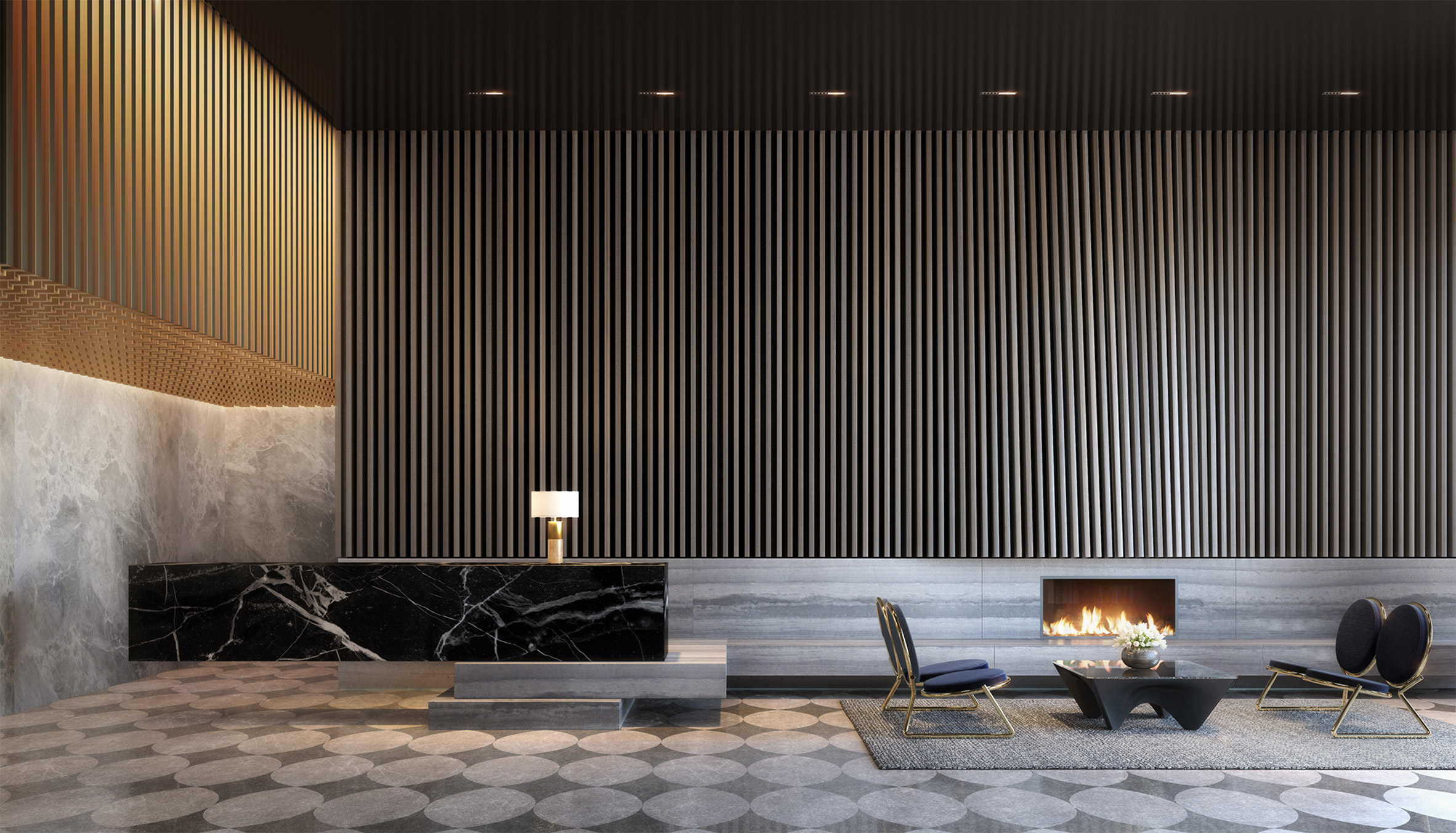 Shown in a 1:1 model of the building’s concrete exterior mounted on the wall of the gallery – just a few blocks from where the 66-storey high-rise will be built – the lumpy form of the concrete facade will cast darker shadows across the grey surface.

But Adjaye intends the nubbly surface for his first New York skyscraper to only be revealed on closer inspection. 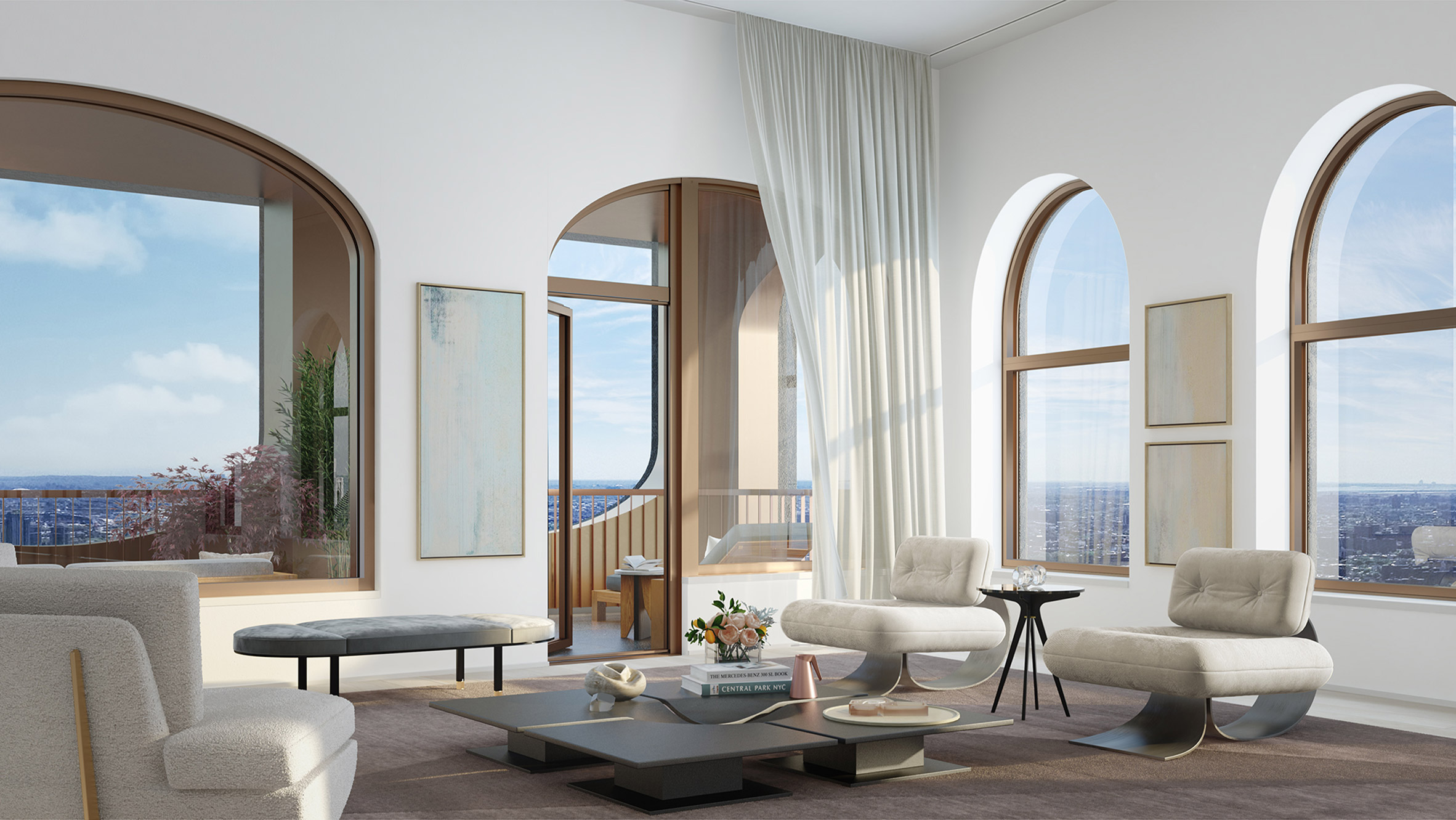 “I call it a lava stone texture – almost like a molten material that’s just frozen,” he said. “I really wanted the reveal to have this texture where you saw the crystalline nature of the aggregates.”

“I’m always talking about the weight of material that they’re gravity based things, we tend to panelise everything and turn them into flat surfaces,” said the architect. “What I didn’t want is it to just be flat.” 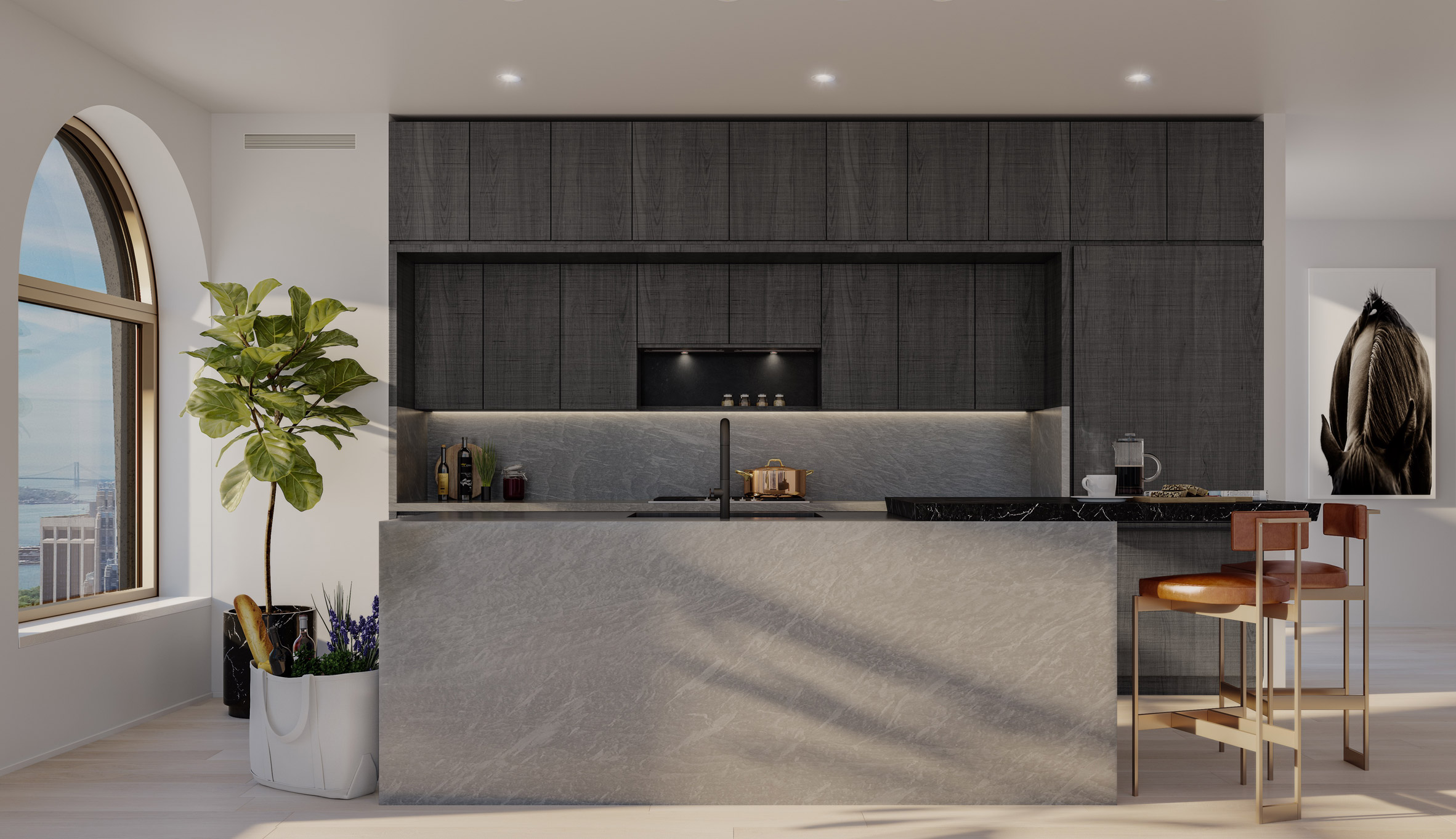 By choosing this facade treatment for the skyscraper, Adjaye is among several architects ditching “default” glass facades for their towers in New York.

He hopes the exterior will provide a complementary, contemporary addition to the surrounding historic, brick commercial buildings in the city’s Financial District. 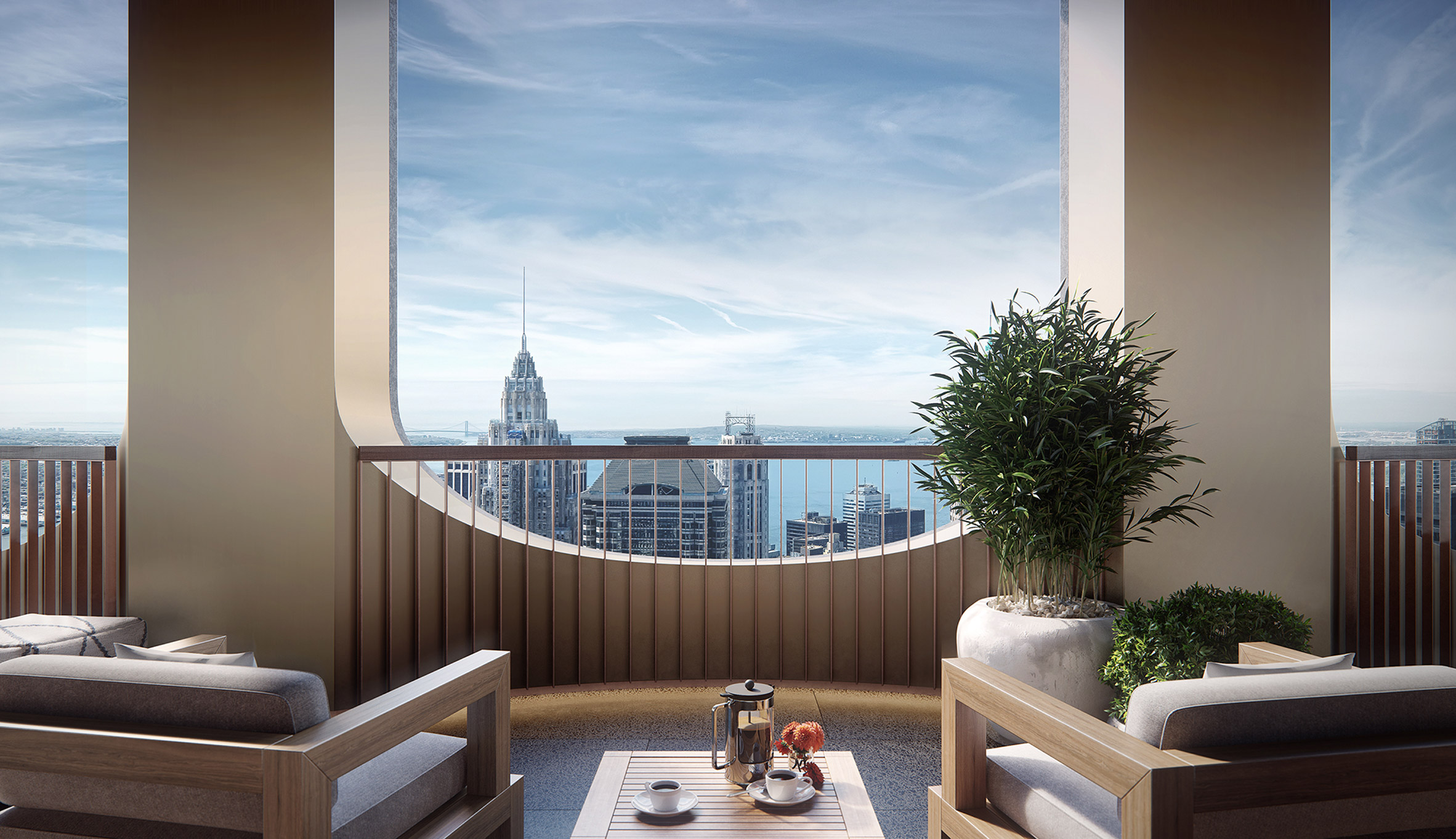 “I wanted something that would be part of this collection of high-rise buildings here but be very distinct in its own right,” he said. “It’s very much a 21st-century building.”

At the event, hosted by the project’s developer Lightstone, Adjaye also presented new exterior and interior renderings, maquettes of the tower, and a model apartment with an open-plan kitchen, living and dining room, and a bathroom. 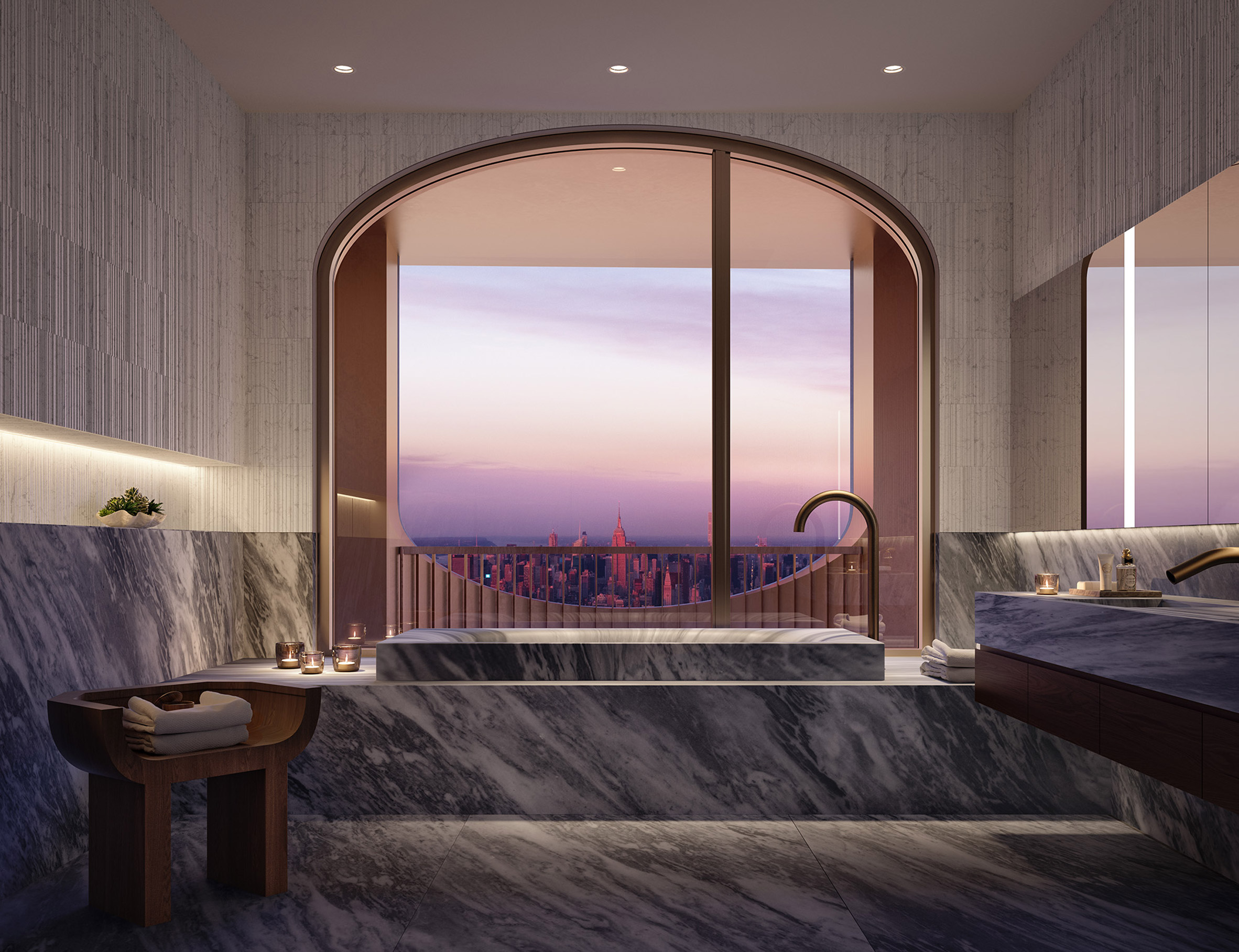 130 William’s arched openings form a key structural component of the facades’ stacked composition, which will cause the skyscraper to gradually taper inwards and created channels for collecting rainwater. 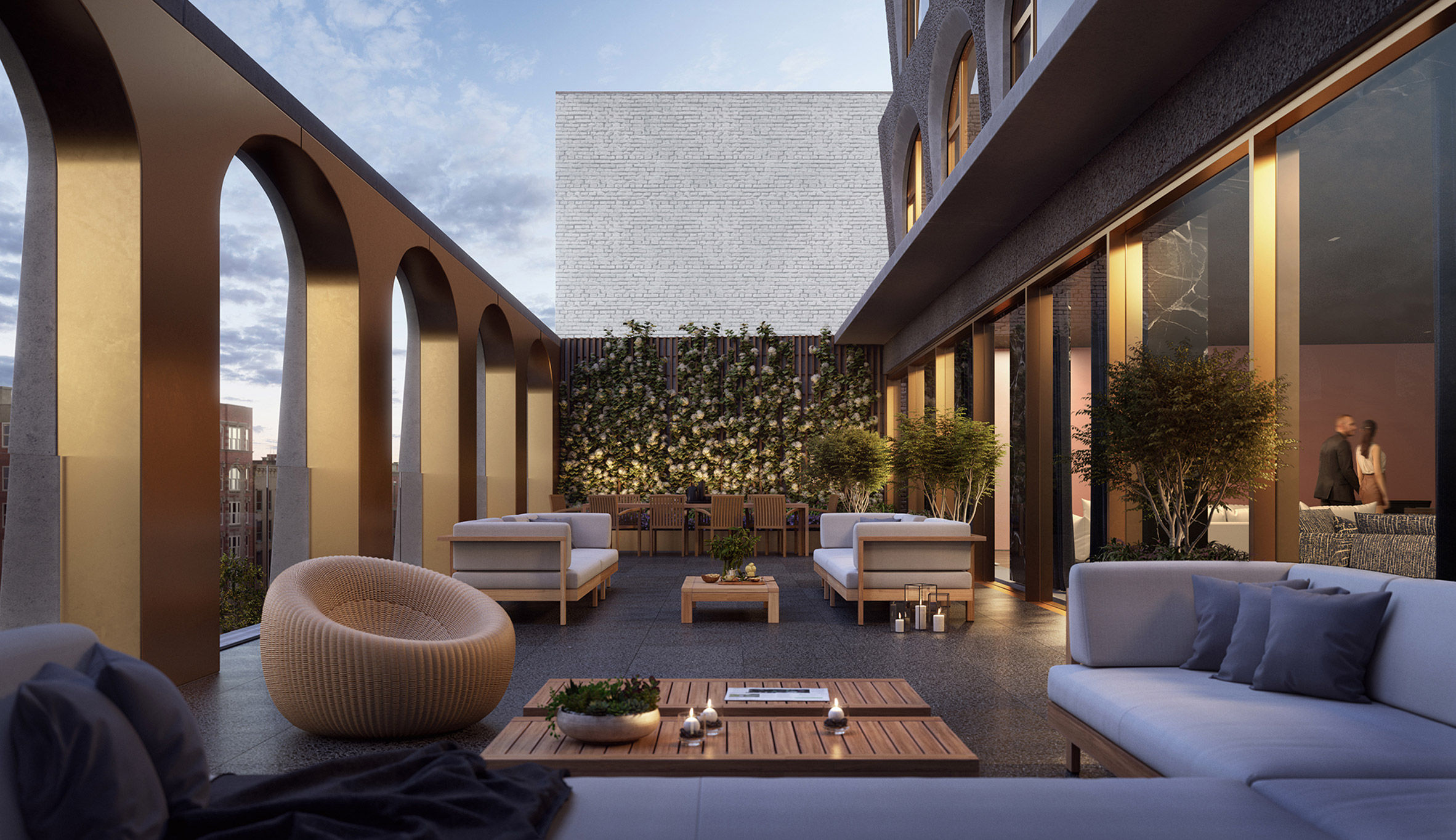 This stacked “motif” will continue through the interiors of the building, for elements including a cantilevered reception desk. Adjaye describes this as one of many technically difficult but apparently “simple gestures” inside.

“I like to make things seem effortless, even though they are not,” he said.

Renderings also reveal designs for a host of amenities – from a children’s play area designed for different activities and a “religious” basketball court with clerestory windows, to a dark cavernous swimming pool that appears to be in the basement but is actually “in the sky”. 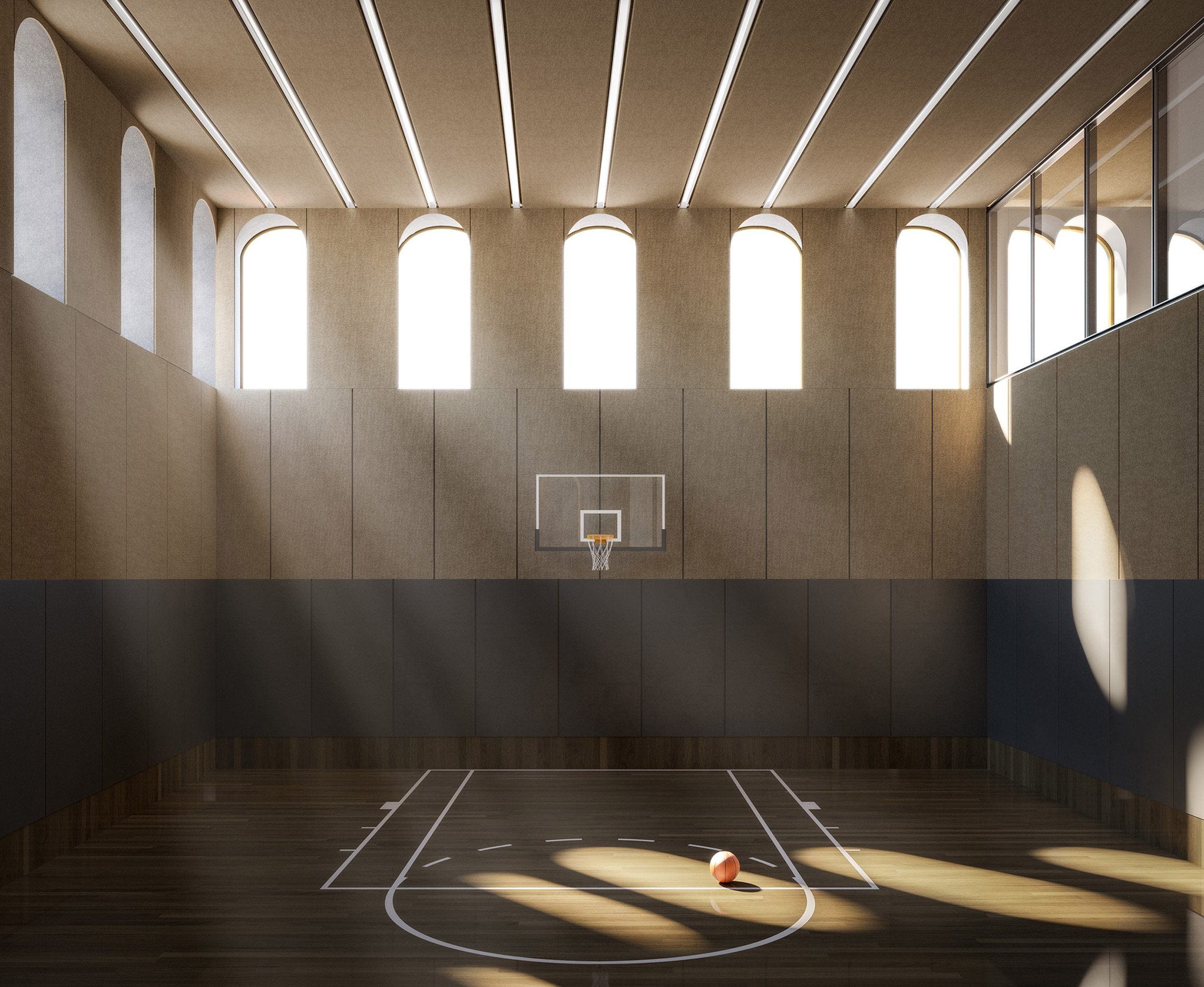 The dark palette in the pool matches a mock-up of one of the 244 luxury condominiums inside the building. Standout features include a bathroom lined with serrated, monochrome marble tiles. 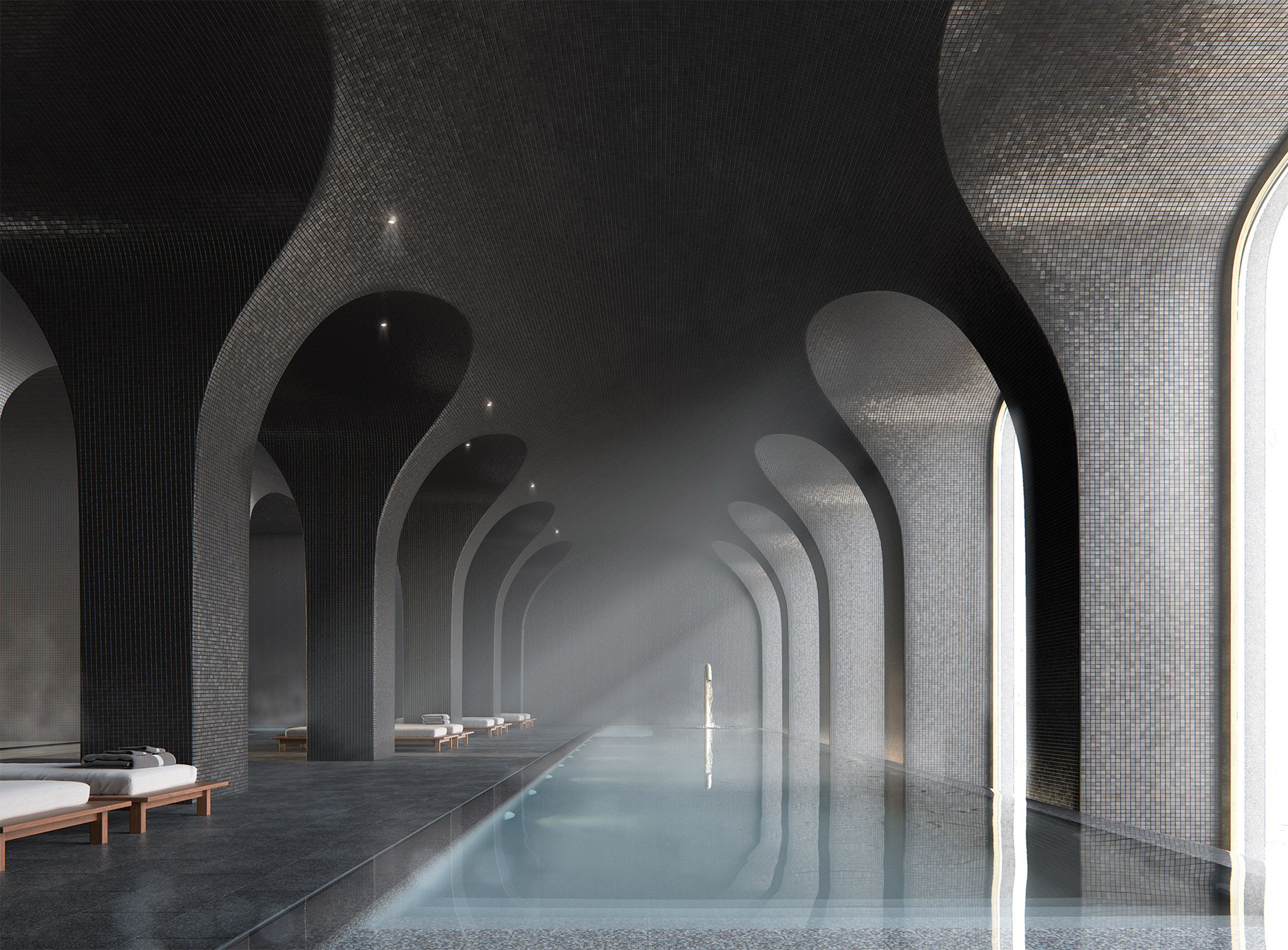 Adjaye – who is a keynote speaker at the AIA Conference on Architecture in New York today, 21 June 2018 – gained his fame in the US for the National Museum of African American History and Culture in Washington DC.

His firm, which has offices in New York and London, recently completed a spy museum in New York and is working on a number of projects across America – from a library and events complex in Florida to a concrete art museum in Texas.

Renderings are by Binyan, courtesy of Lighthouse.

The post 130 William skyscraper for New York will be “great for drones” says David Adjaye appeared first on Dezeen.