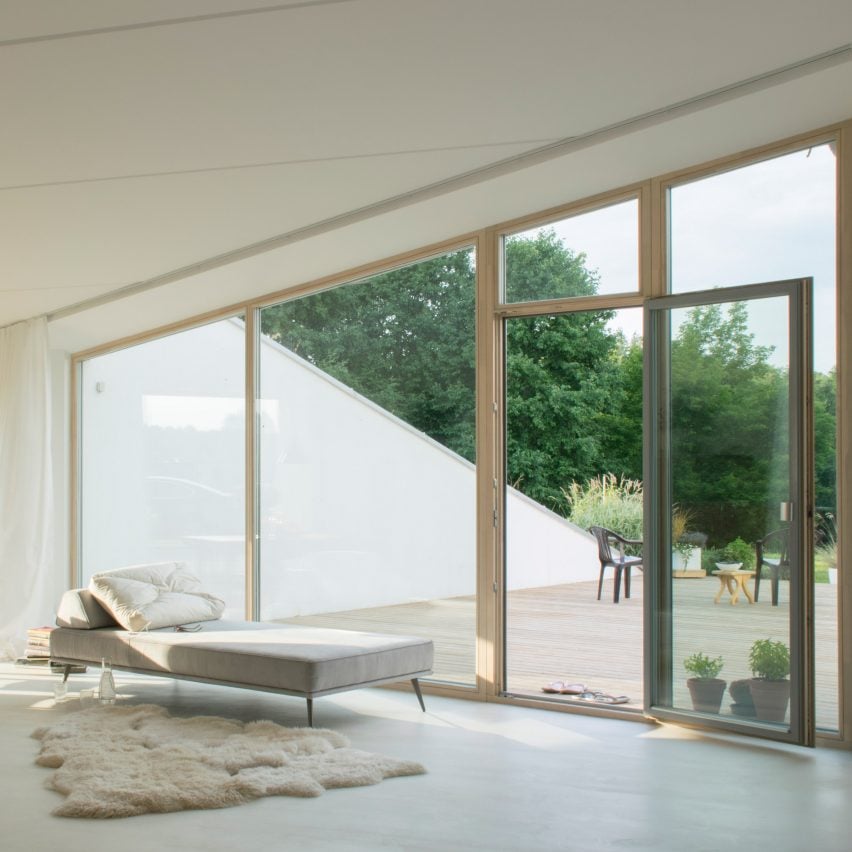 Vilnius-based studio After Party has completed a creek-side house in northern Lithuania featuring a pink kitchen, a planted roof and a terrace that slices through the building.

Located in a suburb on the outskirts of Panevėžys, House and the River is the home of a woman who lives alone but frequently hosts family and friends.

The house is designed to reflect the changing needs of its owner, with a living room designed to feel just as comfortable for a single person as for a large group, and with a mix of indoor and outdoor living spaces.

After Party founders Giedrius Mamavičius and Gabrielė Ubarevičiūtė have also given the house a distinct character, with the use of sharp angles and splashes of unexpected colour and materiality.

The 150-square-metre building has a wedge-shaped volume, thanks to a plant-covered roof that slopes all the way down to the ground. This creates two storeys inside – a square ground floor plan and a small rectangular mezzanine above.

The most radical feature is the terrace that slices diagonally through the living space, creating a secluded patio that faces towards the river.

The spacious kitchen and dining space is located immediately adjacent to this terrace, so that the two spaces feel as one.

“The large wooden terrace creates a feeling of solitude from neighbouring houses, frames the river views and serves as a living room under an open sky,” Ubarevičiūtė told Dezeen.

“The slight rotation works as a device to capture wider views of the river, lets the morning sun filter into the interior space and naturally zones it with varied ceiling heights,” she explained.

The rest of the living spaces are organised around the kitchen and terrace.

Storage is slotted into the spaces where the ceiling height is low, while guest bedrooms are located along one side of the ground floor. Meanwhile the mezzanine accommodates the master bedroom and a separate lounge.

White walls, floors and ceilings give a bright and modern feel to the interior, allowing key elements to stand out.

Among these standout features are a fireplace with gold surfaces and a boulder in its base, a pink-painted kitchen island with a pink terrazzo countertop, and a series of antique furniture pieces.

“By maintaining the clean white space as a background for living, the intention is to increase the awareness of the things that appear there,” said Ubarevičiūtė, pointing to a dining set from the Soviet era and a cupboard that once belonged to the client’s grandmother.

Ubarevičiūtė said the boulders (there’s a second boulder forming the front doorstep) have a local connection, having been found in a neighbouring farm.

“All of these elements manifest the idea that luxury is built, not necessarily through expensive things or materials, but rather through the stories they tell,” she said.

The roof of House and the River has been planted with grasses, herbs and flowers, creating a more enjoyable experience in the living spaces while also allowing the building to become a haven for bees and other insects.

As the land where the house is located, along with its neighbours, has only recently been developed from meadowland, the architects were keen to maintain biodiversity and the feeling of being surrounded by nature.

“We created an unmanicured wild meadow that compensates the local biodiversity and extends the slopes of the river into a continuous green vista,” concluded Ubarevičiūtė.

Photography is by Giedrius Mamavičius.

Other projects in Lithuania on Dezeen include a garage that was turned into a Corten-clad micro home and a house with a glass garage to display the owner’s car.