A multi-coloured house is turned upside down and used as a climbing frame in this competition-winning design by architecture office Alma-nac.

Set to be built this summer, The Upside Down House will form part of a new children’s play park in Green Park Village, a residential neighbourhood in Reading, England.

The play house will feature a chimney that raises it up into the air, as well as a slide that emerges from an upturned front door and a drainpipe that functions as a fireman’s pole. 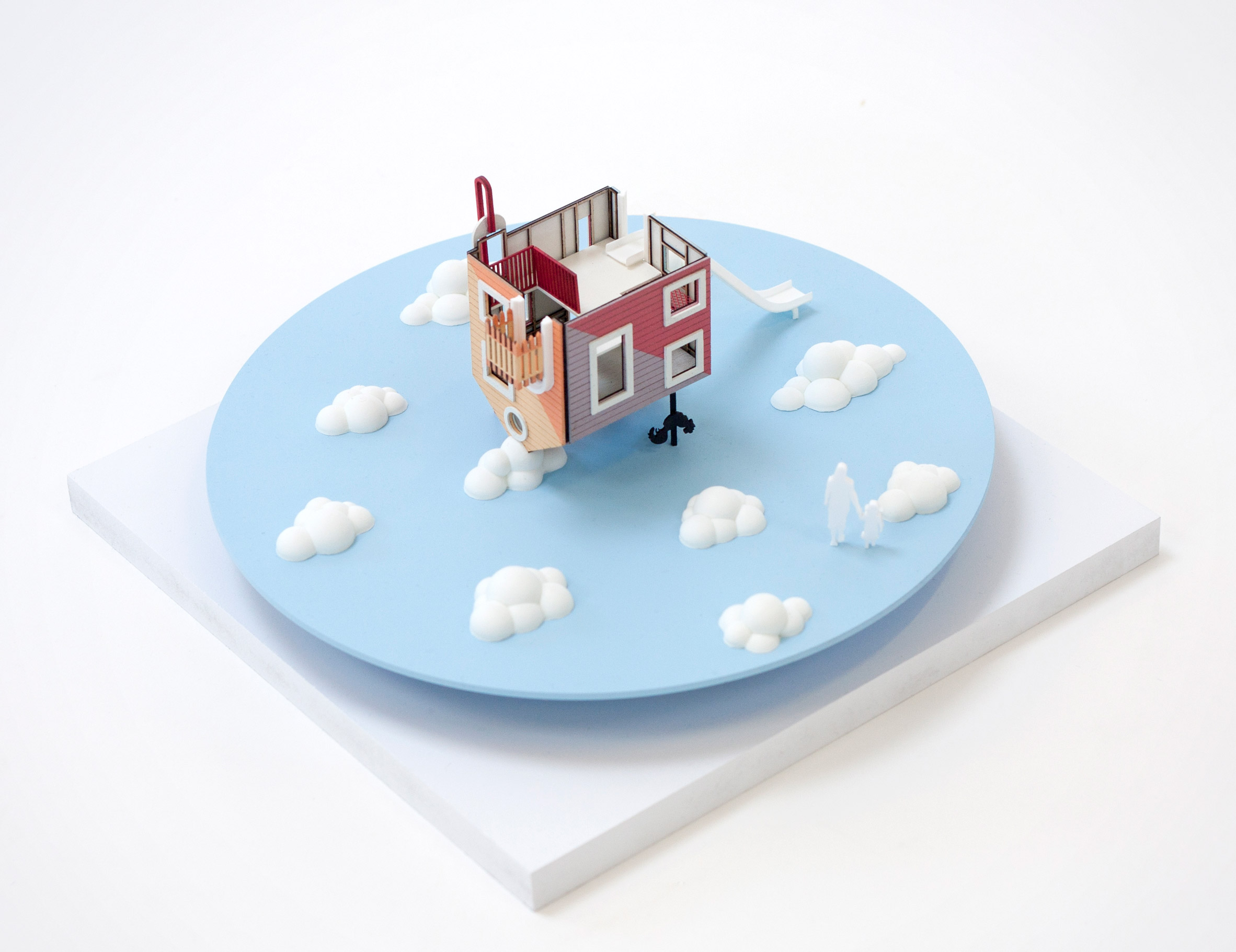 Other highlights will include a climbing wall that adjoins a window, a balcony surrounded a painted picket fence and a tunnel concealed behind a pair of rose windows. 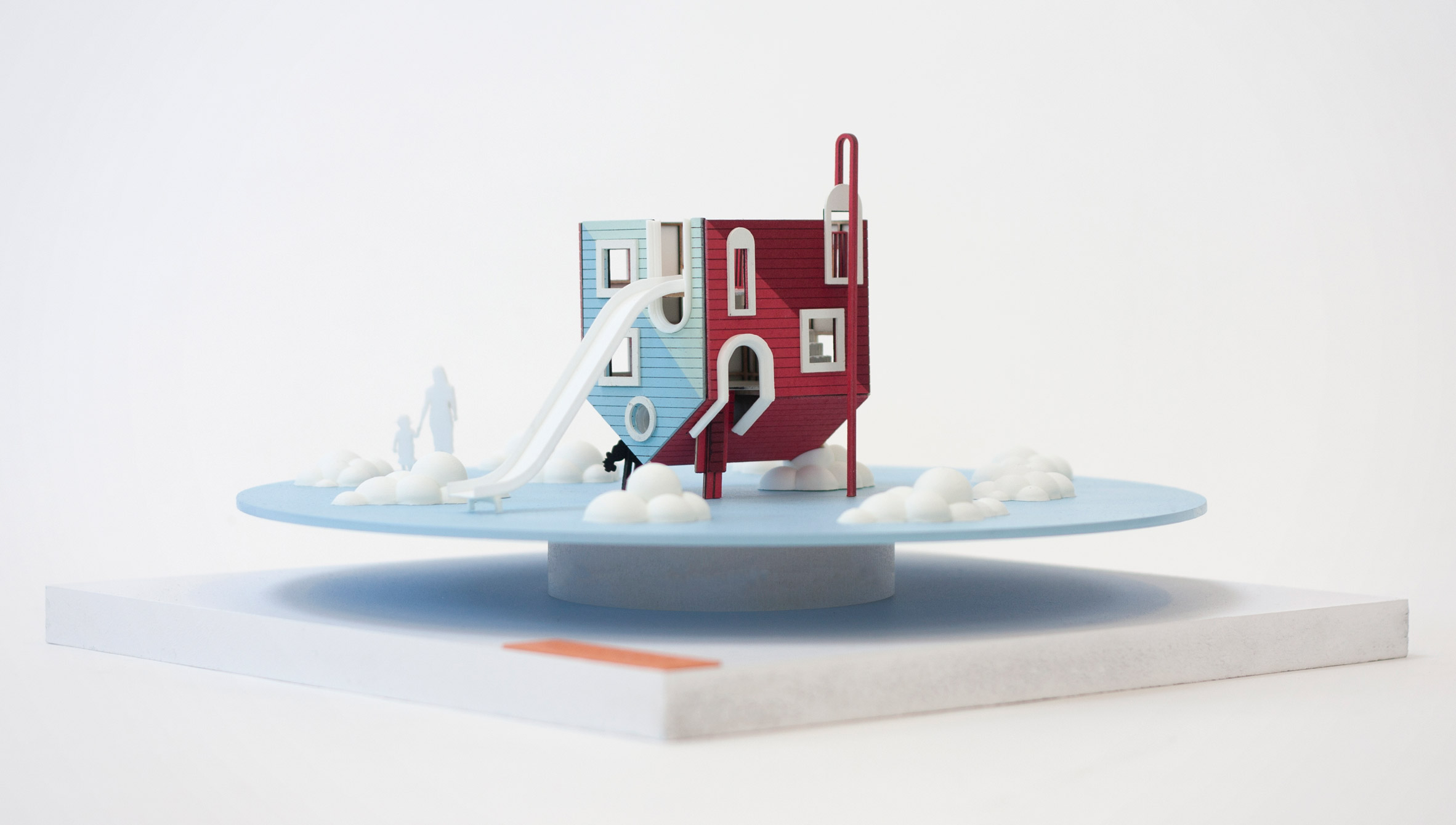 “The floor becomes the sky, the roof becomes the floor, enter through the chimney and slide out of the front door,” said the team.

“It maintains the joy of a good play/tree house – the ability to be ‘king of the castle’ and a hidden world where only children can go.”

The Upside Down House was the winner of a competition called House of Colour, which called for “novel and inspiring concept designs for a £15,000 playhouse or set of playhouses”. 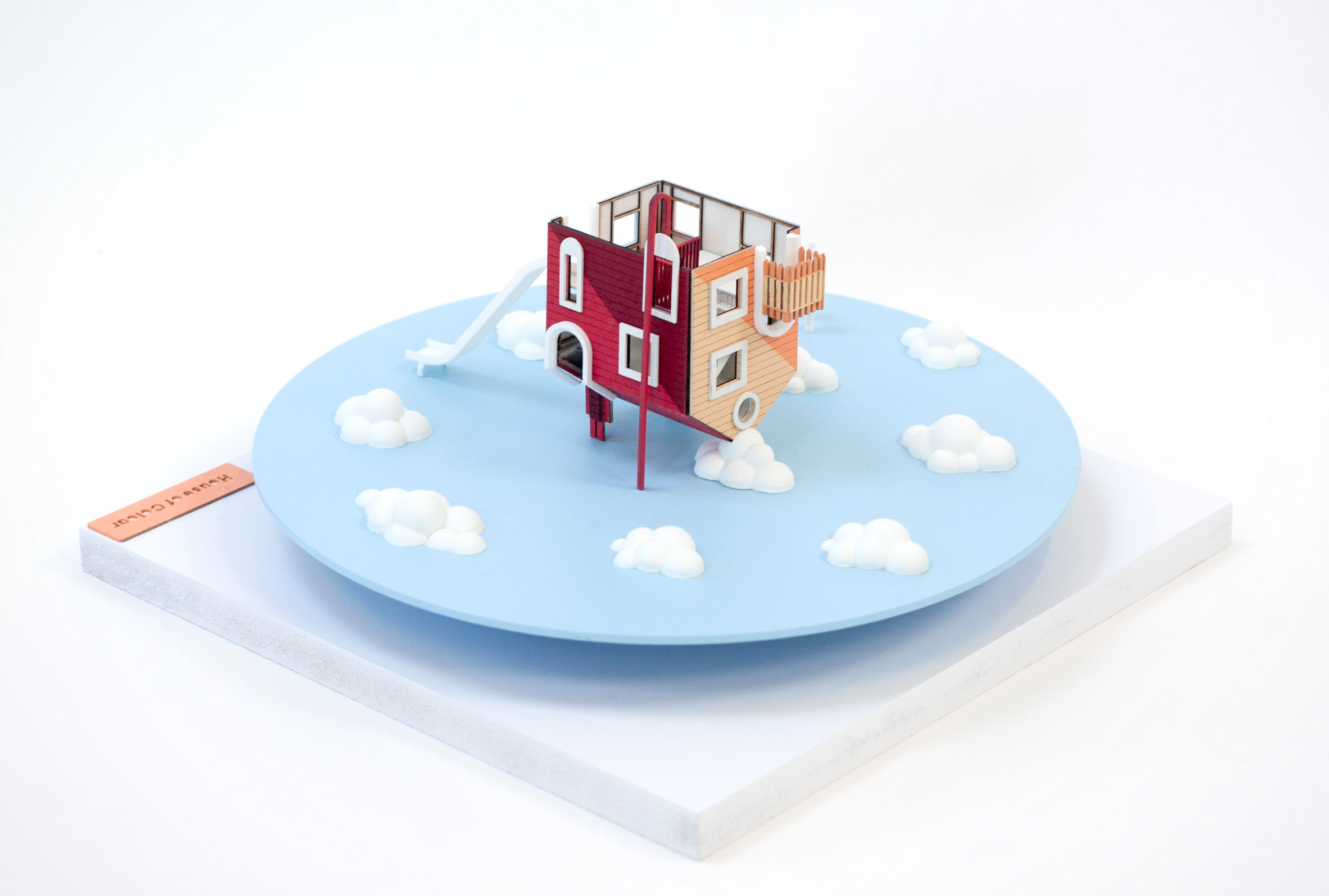 The contest offered a response to an issue raised by Dezeen columinst Phineas Harper last year – that the designs for children’s play spaces are too often lacking in imagination.

Alma-nac’s design is intended as a playful abstraction of the houses in the area – encouraging children to look at their surroundings in a new way.

“It draws on the formal language of Green Park Village and borrows architectural motifs from that context. The distortion and reorientation of these elements brings a sense of surreal playfulness to the suburban village landscape,” said the studio. 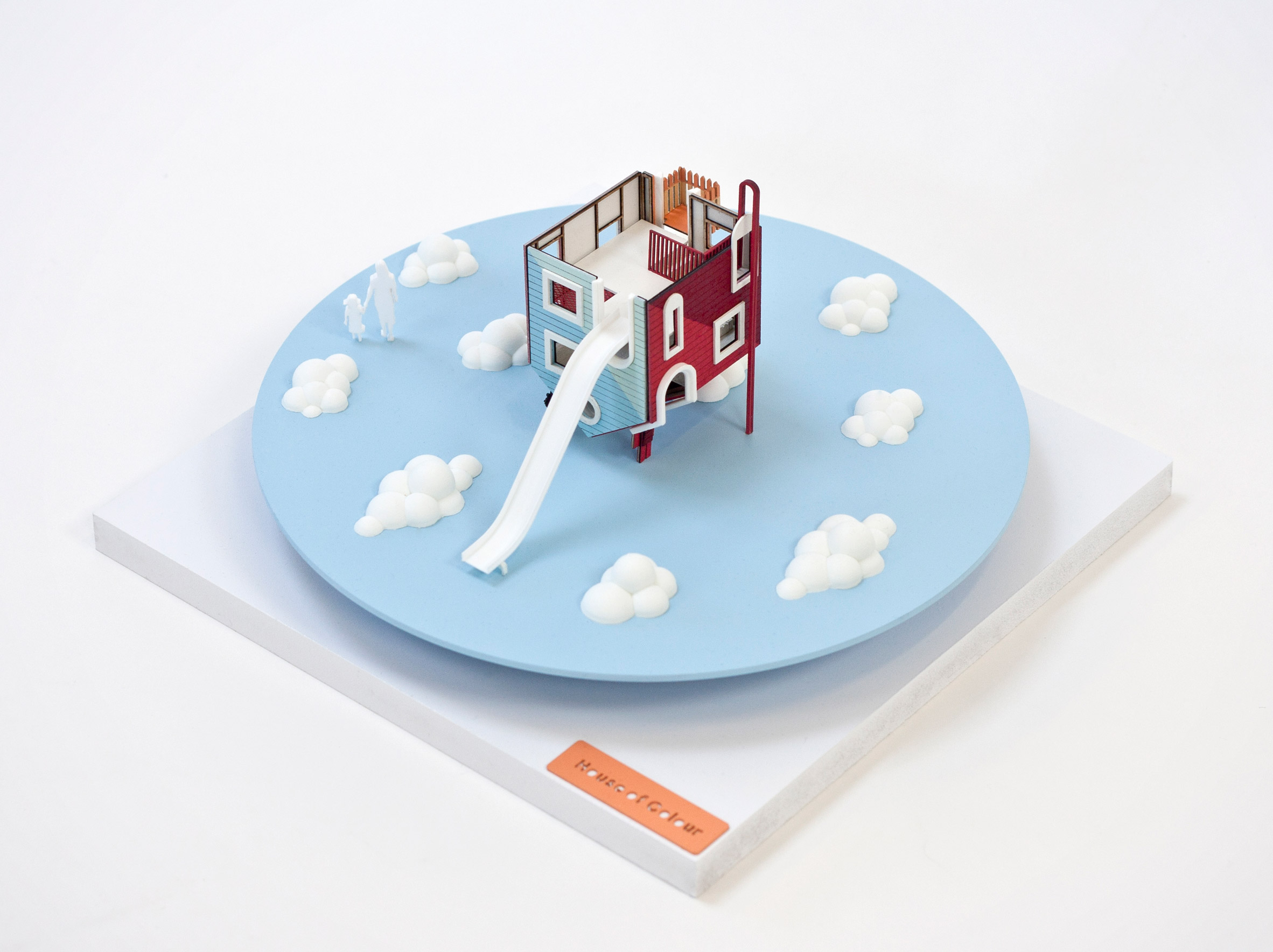 The intention is to apply a different colour palette to each of the house’s sides. One side will be finished in red and pink, while another will be painted in yellow and orange hues. Shades of blue and green will colour the remaining two walls.

“Each facade has its own adventures and its own colour. They can be seen as part of one house or four houses together each with its own story,” added the team.

The house will sit on top of a blue surface dotted with cloud-shaped sculptures, to create the impression of a sky.

Inside, domestic details including artworks and a fireplace will be painted onto walls. 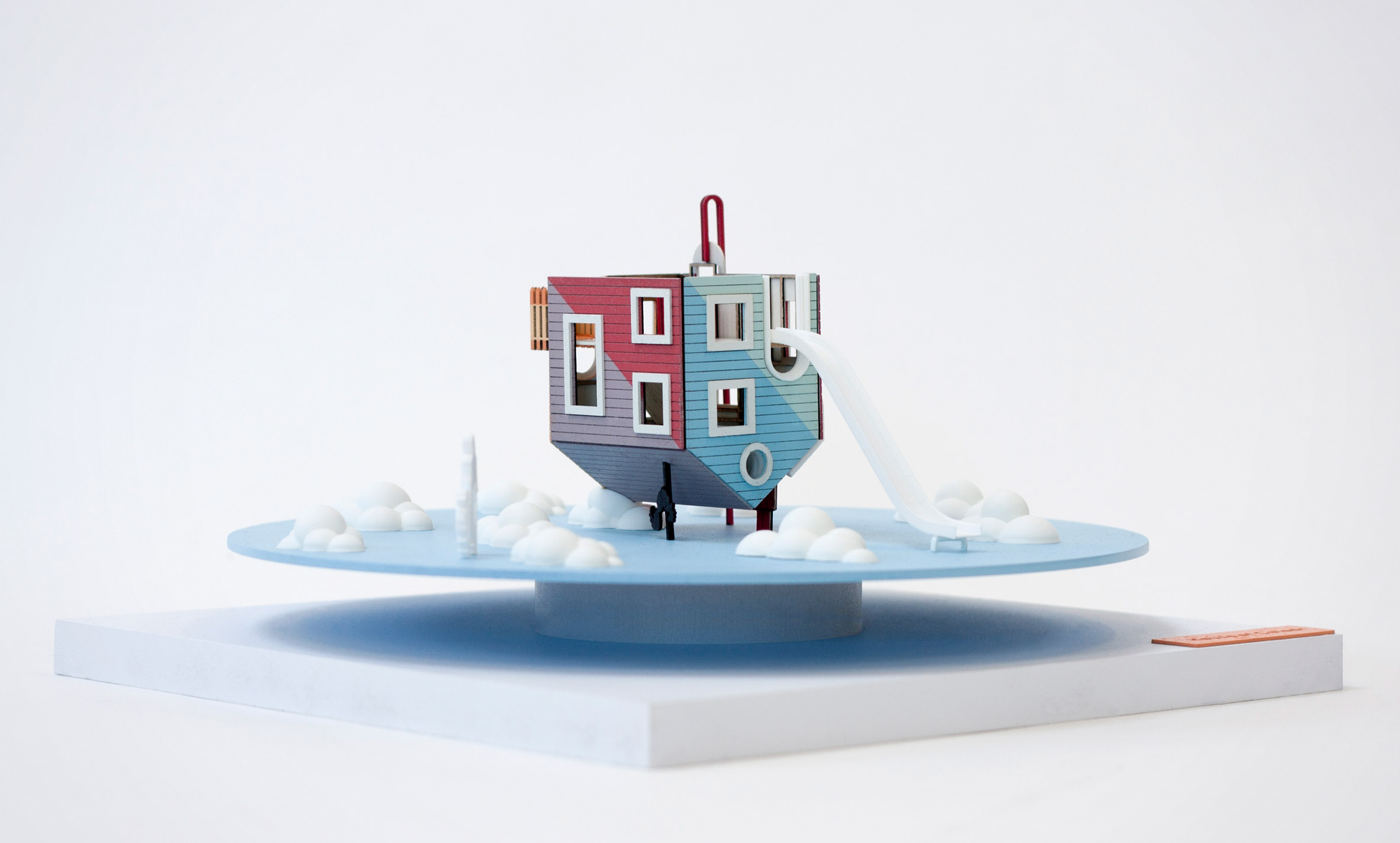 Alma-nac often introduces colourful details into its designs, with past examples including a giant gingerbread house, an extension with a huge pivoting door and a set of flats with colourful herringbone-patterned floors.

The studio is currently waiting for a final decision to be made on the exact location where The Upside Down House will be built, but is expecting to submit a planning application imminently. 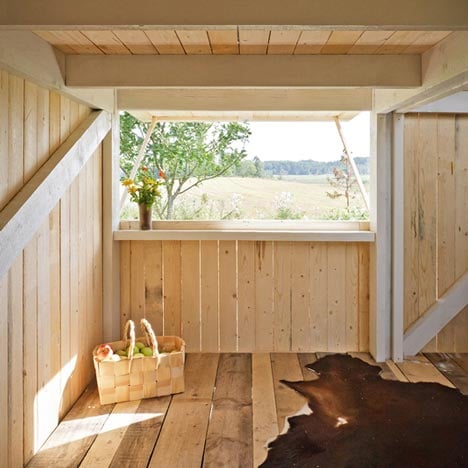