Canadian firm MacLennan Jaunkalns Miller Architects has completed a swimming centre for the University of British Columbia, which is surrounded by fritted glass and topped with a dramatic white roof.

The multi-use Aquatic Centre was designed for both elite-level swimming and daily community use in Vancouver. Amenities for Olympic training, community access, students at University of British Columbia (UBC) are incorporated into the project. 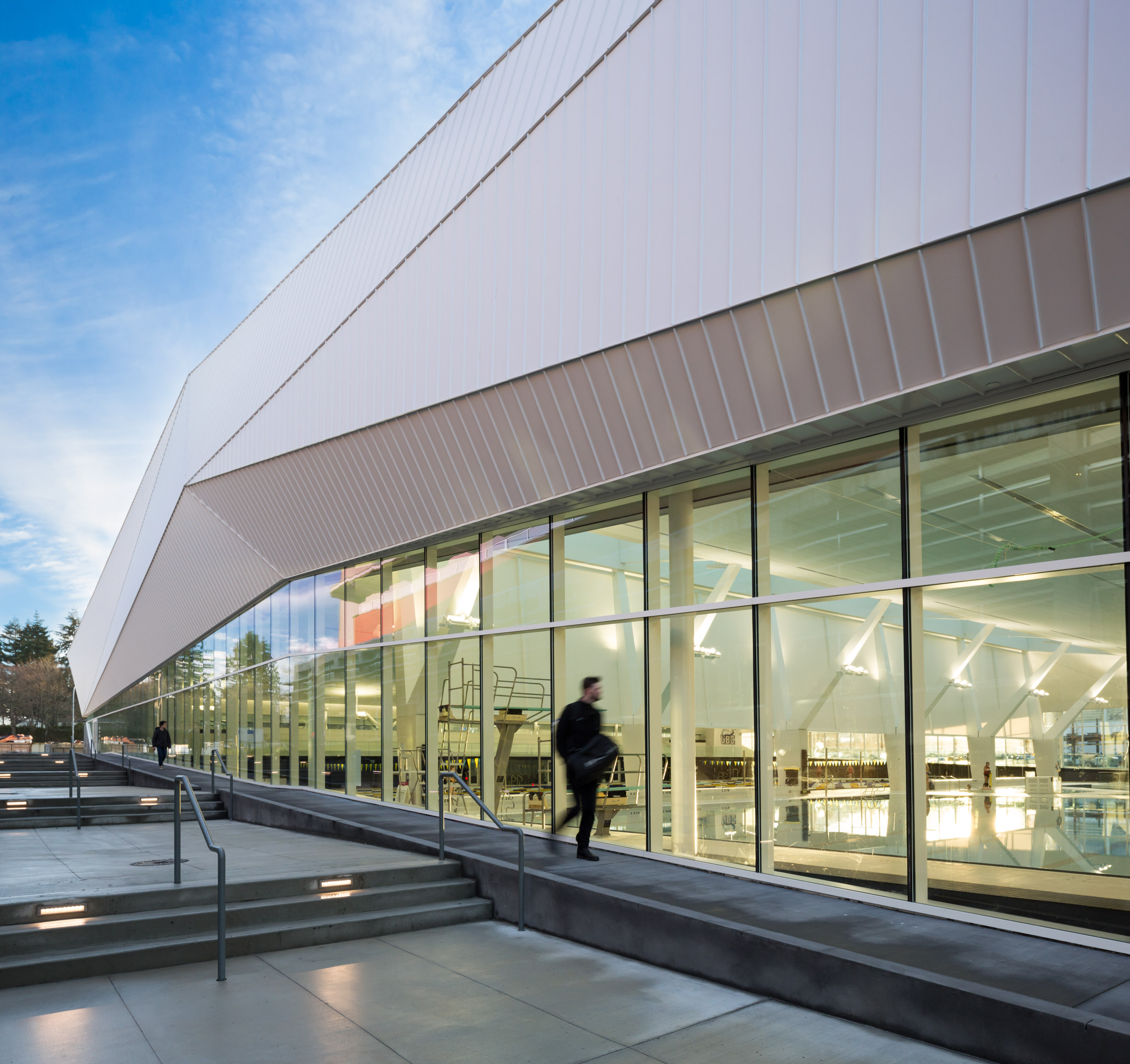 The single-storey building has a square plan measuring 85,000 square feet (25,908 square metres), and is wrapped with fritted glazing across three elevations to bring sunlight inside. 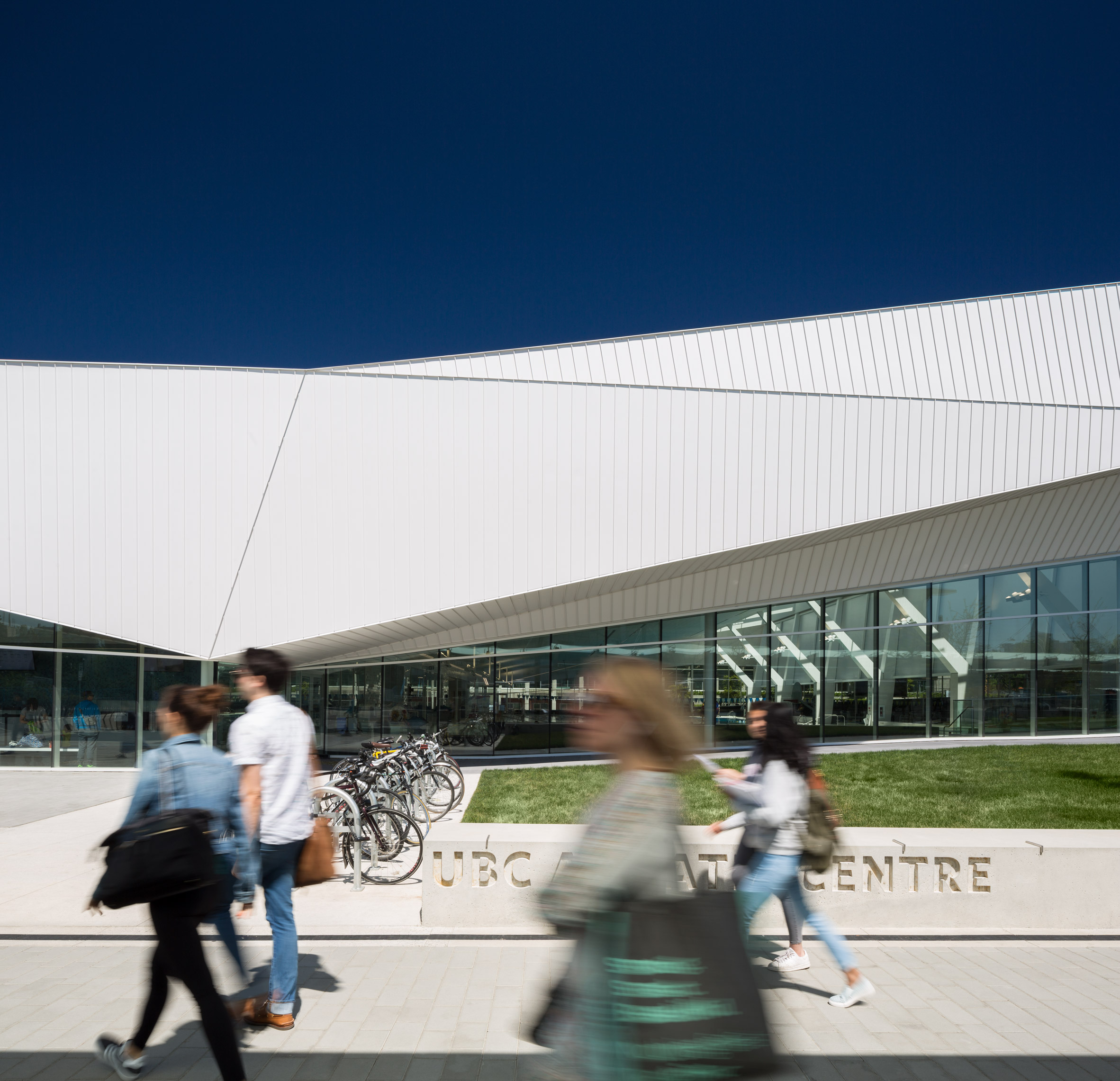 Upon entering through a reception and lobby area is a narrow corridor along one of the facades, lined in floor-to-ceiling windows. A geometric pattern of tiny blue squares covers the glazed surface. 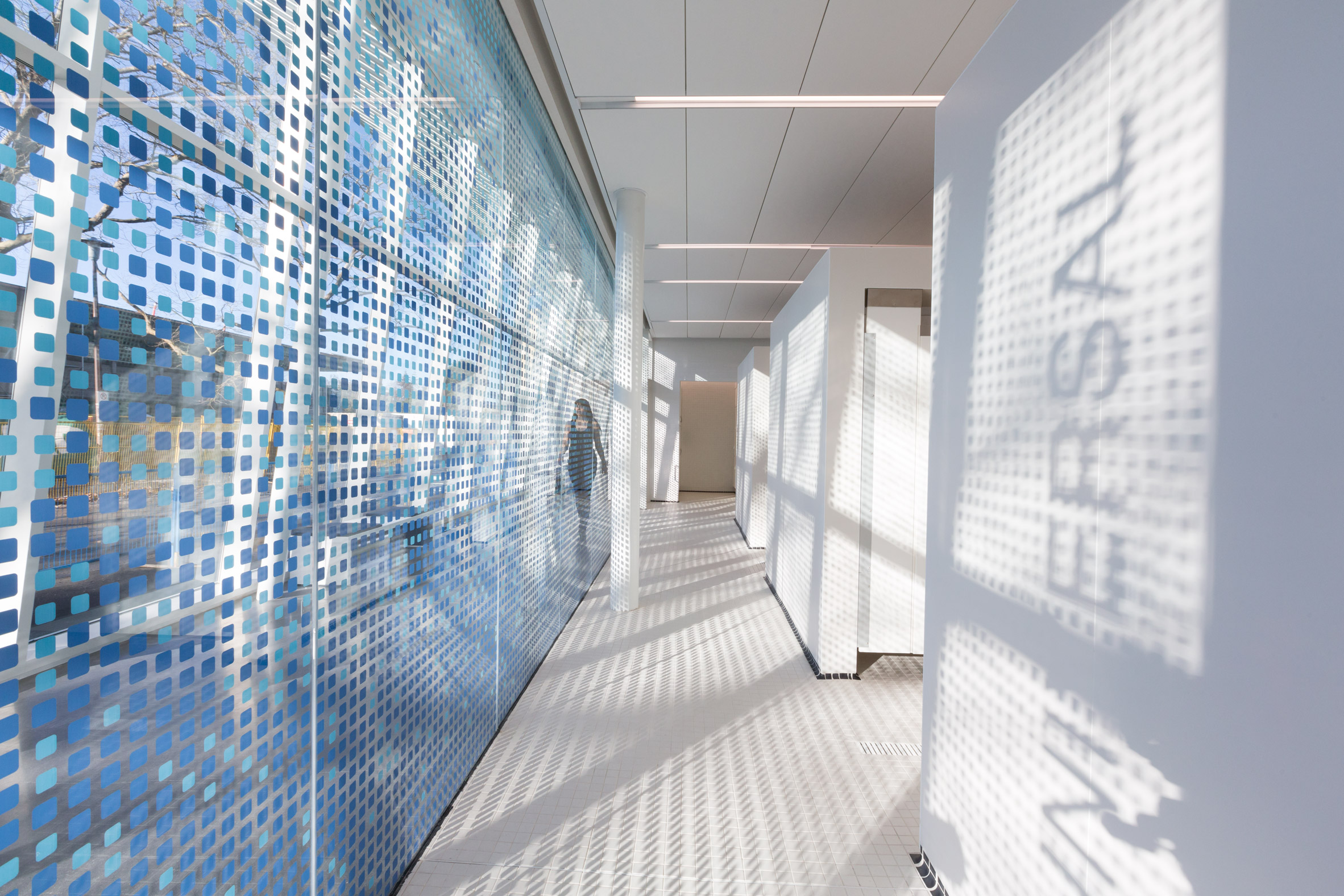 Attached to this concourse are various changing rooms with showers and bathrooms, while administration offices are located nearby.

The whole interior features bright white walls and floors, which enhance the turquoise hues of the pool designs. 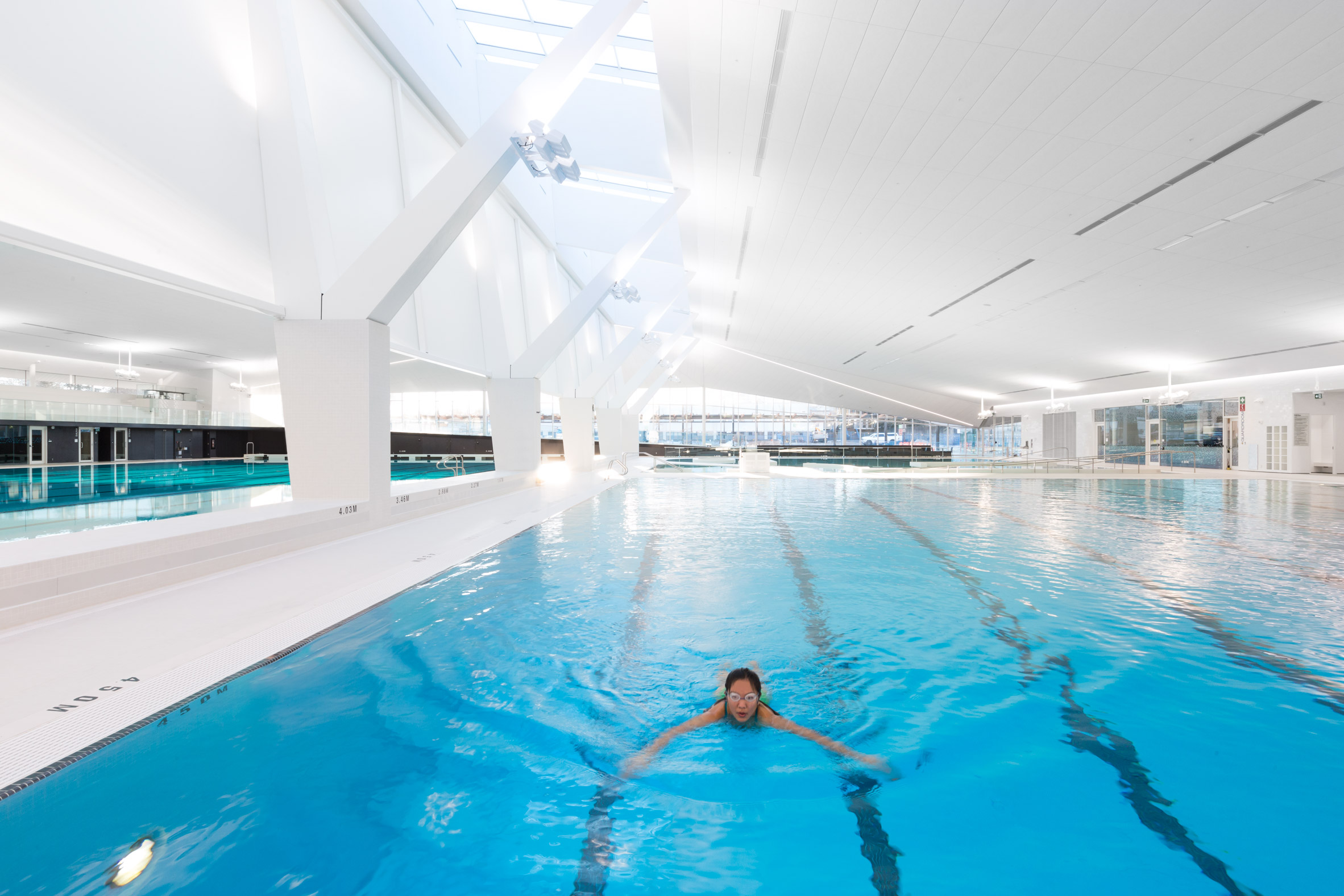 The main swimming area is divided into two sides with Y-shaped columns and a translucent screen. A continuous skylight also bisects the building. Windows line its sides, with storage closets, classrooms and viewing areas completing the plan. 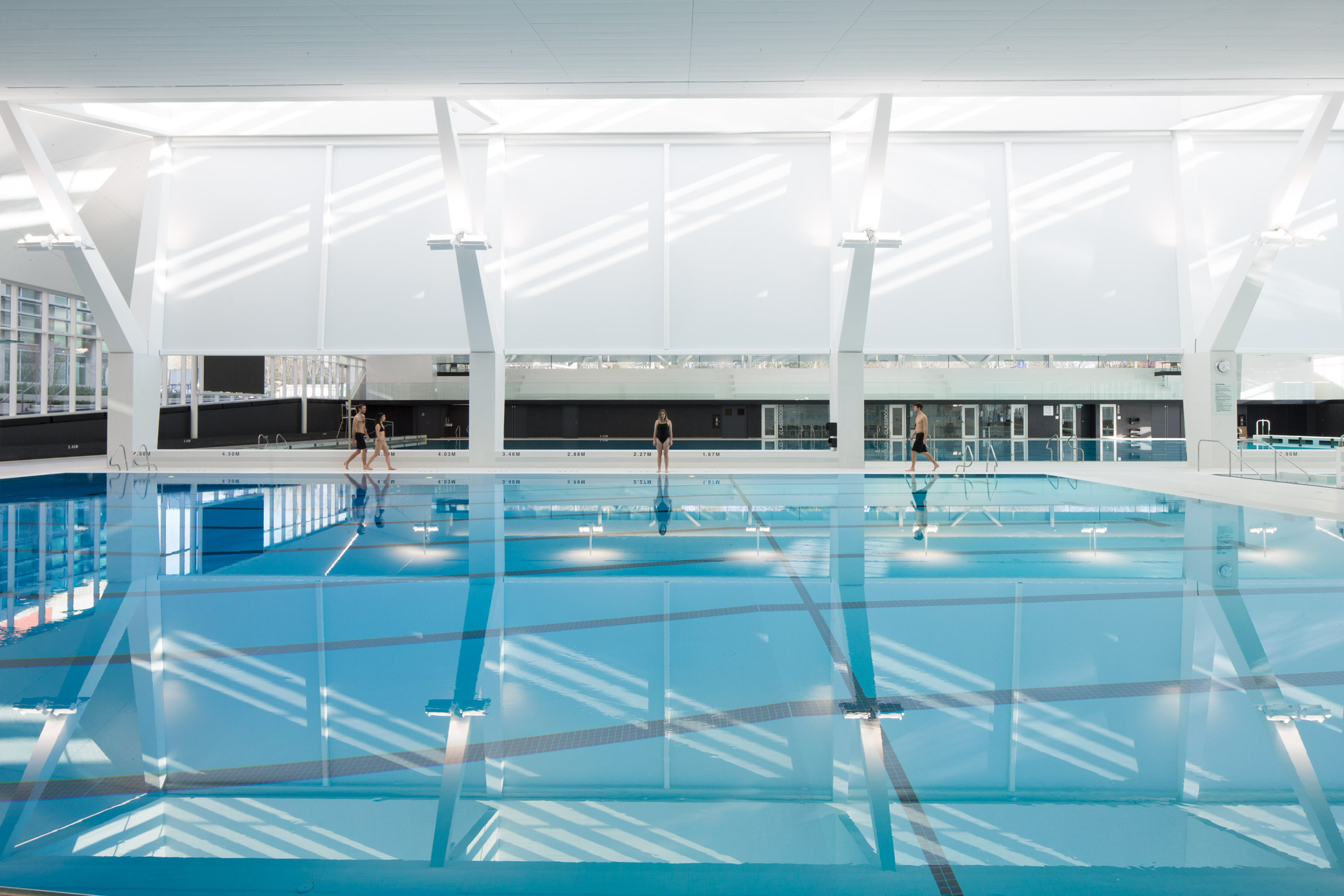 “In 2012, UBC sent more swimmers to the London Olympic Summer Games than anywhere in Canada, and had the most successful swim team in the country,” said MJMA.

A 82-foot (25-metre) recreational lap pool and “diving well” has a moveable floor and diving platforms, while a leisure swimming area has a smaller pool or “leisure basin” for hydrotherapy. 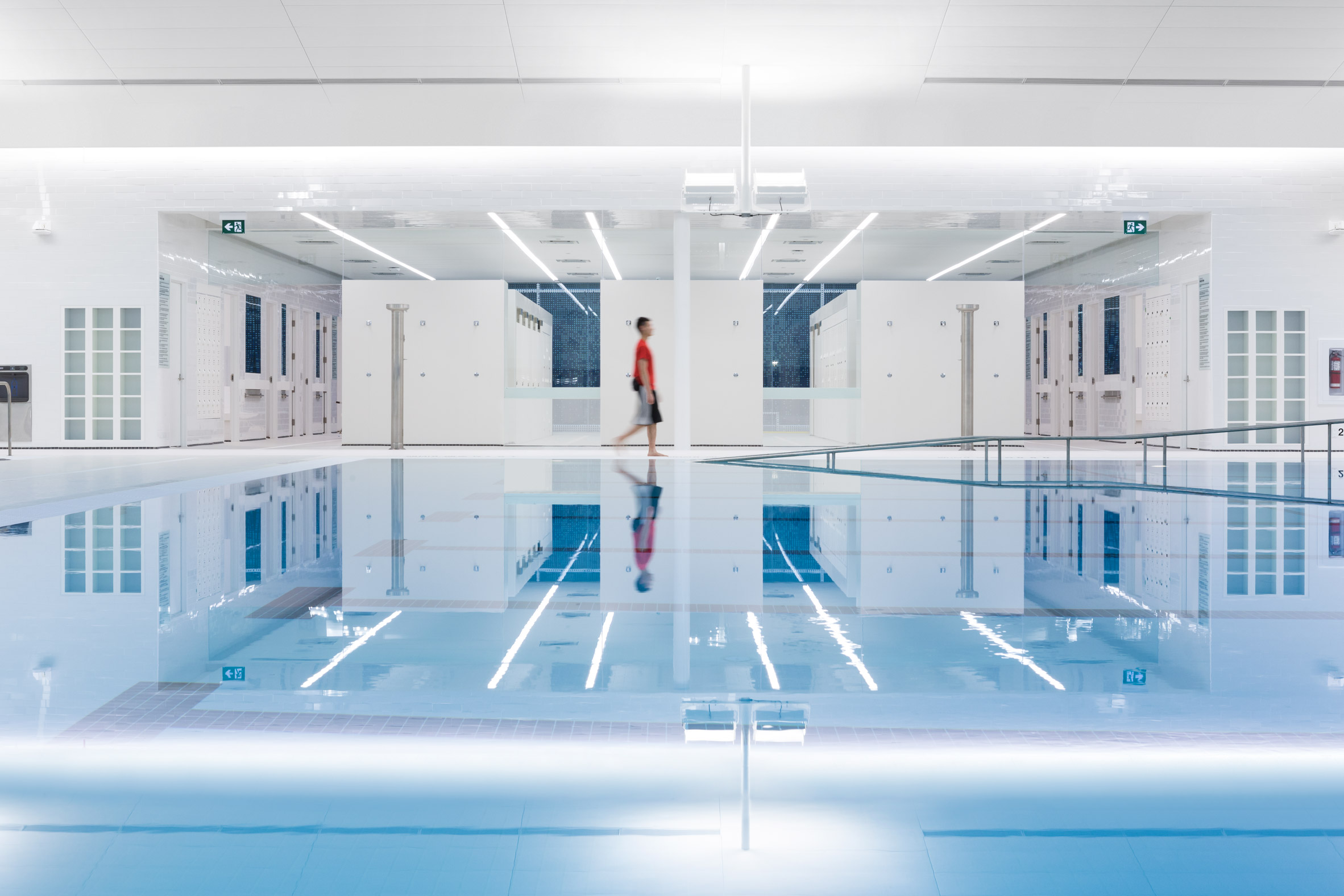 A plan was developed by on-campus research for optimum swimming pool air quality, to help mitigate problems with swimmers’ asthma. The water’s surface is scoured by air flow from a central bench structure and then returned at the perimeter pool gutter. 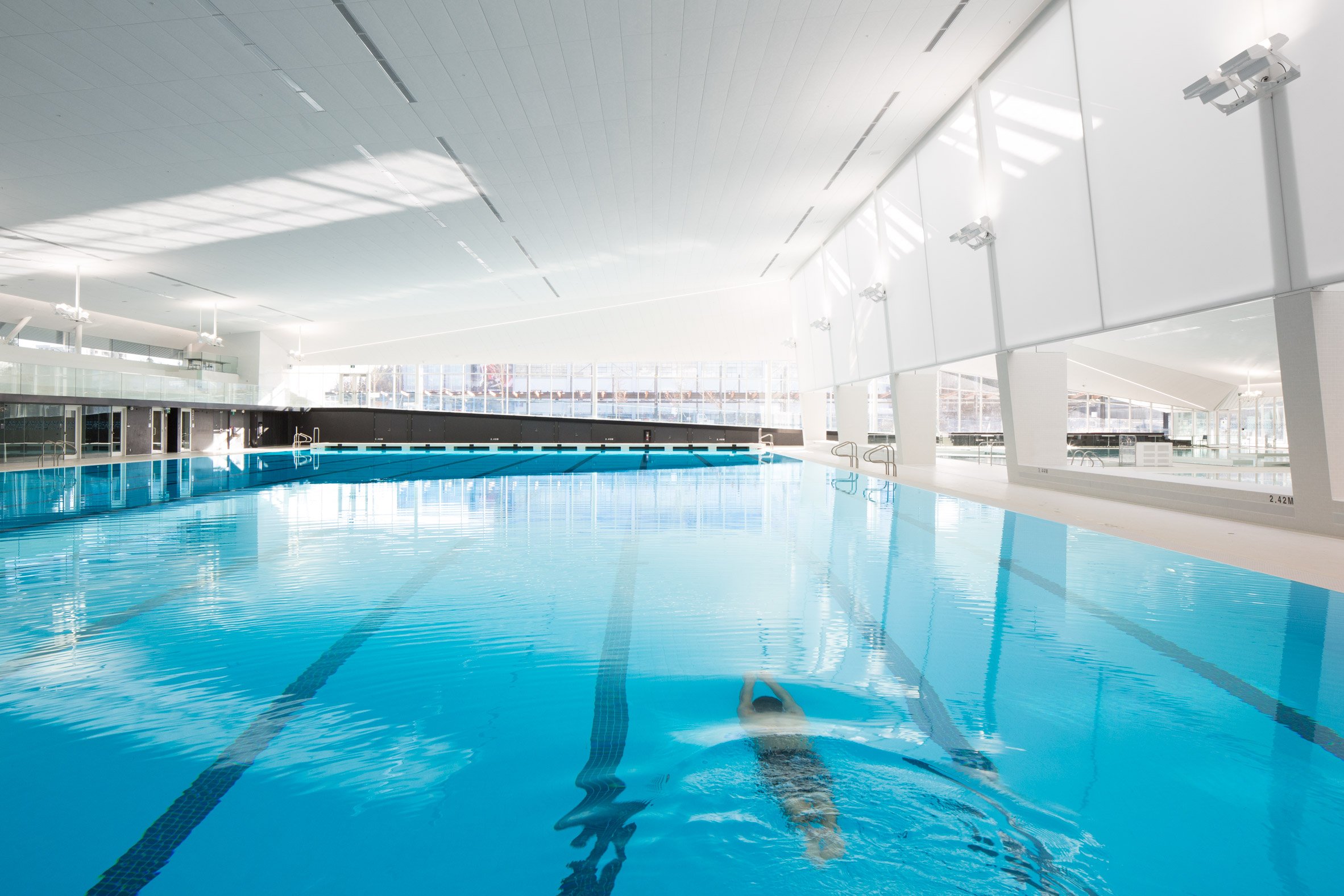 Energy for harvesting rainwater and heat recovery systems is drawn from the UBC District Energy system.

A three-compartment cistern stores water from the roof and adjacent transit plaza, which is used to refill pools from evaporative loss, as well as grey water for flushing toilets and site irrigation. 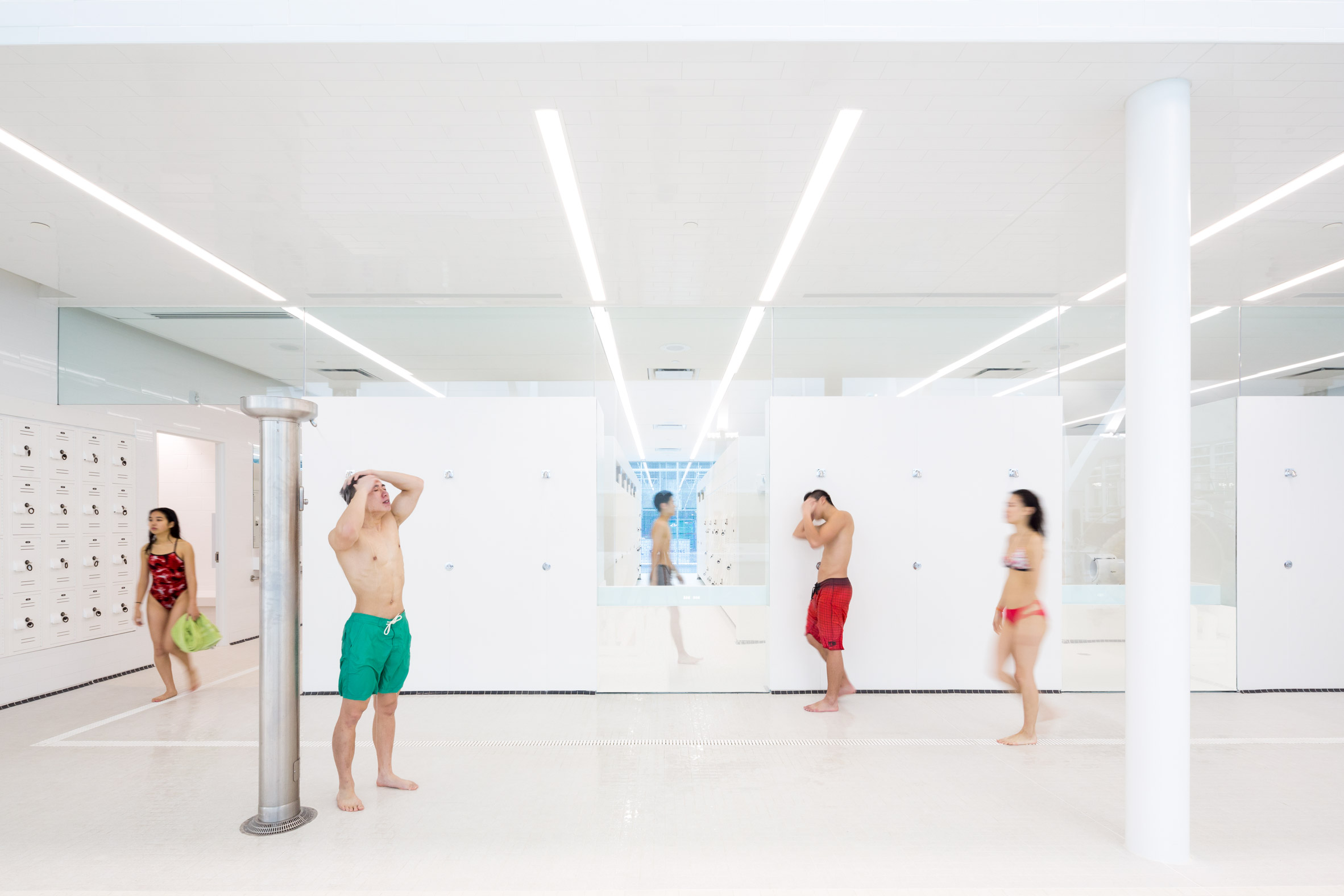 UBC Aquatic Centre is sited close to an alumni centre for the university, which has a three-storey facade covered in thousands of fritted glass panels.

MJMA was founded in 1988 by John MacLennan, Viktors Jaunkalns and David Miller. MacLennan retired in 2009, and the firm acquired Andrew Bramm, Robert Allen and Ted Watson as partners. MJMA has also completed a lakeside cabin lined in sliding glass doors and black metal in Ontario.