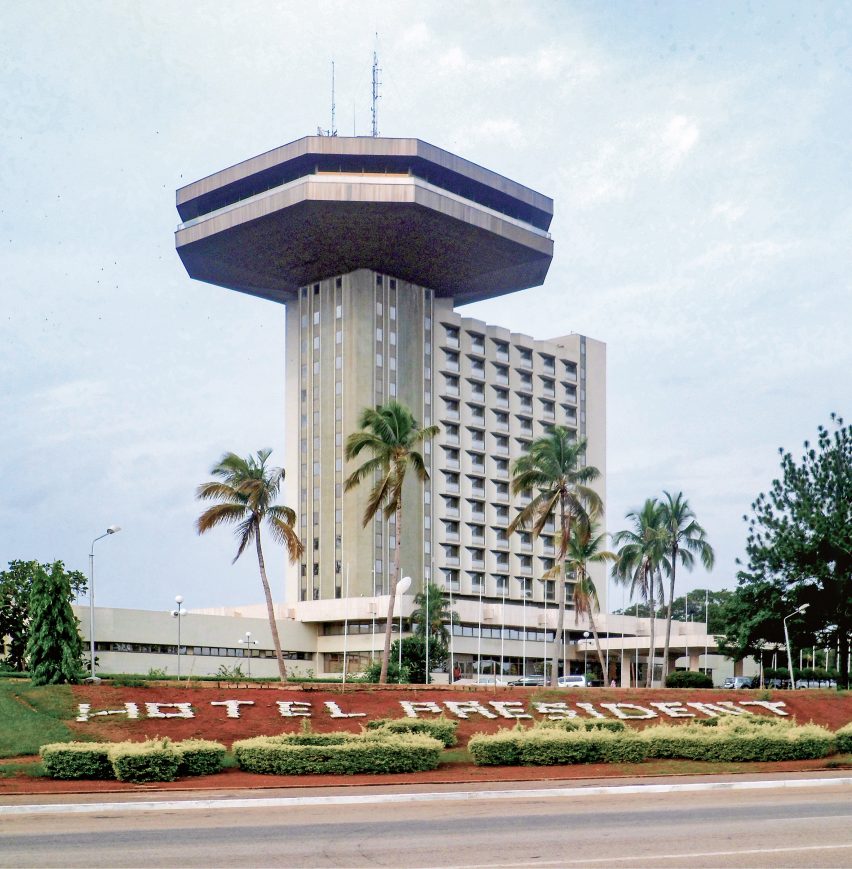 In the third part of our Sub-Saharan Africa Architectural Guide series, the editors of the guide pick their highlights from Guinea-Bissau, Guinea, Sierra Leone, Liberia, Ivory Coast, Ghana, Togo, Benin and Nigeria.

With contributions from nearly 350 authors, the Sub-Saharan Africa Architectural Guide aims to be a comprehensive guide to architecture in the southern part of the continent.

The third volume of the seven-volume publication is named Western Africa along the Atlantic Ocean Coast and focuses on the architecture of Guinea-Bissau, Guinea, Sierra Leone, Liberia, Ivory Coast, Ghana, Togo, Benin and Nigeria.

Read on for the book’s editors, Philipp Meuser and Adil Dalbai’s, picks from the region:

Located on National Heroes’ Square, to the southwest of the Presidential Palace, this building can be related to other revisionists’ experiences of the modern movement during the period of new brutalism.

It is defined by one single volume with the main facade covered in a vertical brise-soleil to enable control of the heat excess in the offices. The arched roof was also used to create ventilation, adjusting the building to its tropical climate.

A wide spiral staircase characterises the entrance level and establishes access to the other levels of the building.

As in many other African countries, a large-scale education offensive began in Guinea after independence in order to facilitate the training of a local elite. In 1962 the Institut Polytechnique de Conakry (IPC) was founded as the first institution for higher education in the country.

Under its first president Ahmed Sékou Touré, Guinea wanted to break away from the former colonial power and aligned itself with the Soviet Union, and the country’s first university complex was designed by a collective of Soviet architects.

The university was initially designed for 1,500 students – one of the largest university projects in western Africa at the time. Its main building, completed in 1964, housed the administration, rectorate, library, and conference hall, as well as a few classrooms and offices.

Most of the offices and classrooms for the faculties were spread over several elongated blocks. With their concrete mesh ⁄ brise-soleil – an element often found in late colonial and early post-independence modernist architecture – these buildings made natural ventilation possible and so were a good response to the local tropical climate. The dominant characteristic of the main building is the large mosaic on the north side of the main lecture hall, which shows a black Prometheus breaking free from his chains.

Orkidstudio’s new girls’ school in Kenema was designed to provide extensive new learning facilities for up to 120 young girls from the local area and was the only local school that didn’t allow corporal punishment.

However, just four weeks from completion progress was brought to a halt and the site closed as the first confirmed cases of the Ebola virus hit the region. After a two-year delay, the school opened in 2016.

The overall style of the imposing, neo-classical masonic temple on Mamba Point was influenced by the secret society’s lodges in the US.

The edifice has various classical elements: high Doric marbled columns, cornices at the top of the parapets, and pediments. Originally it was covered in marble, but due to damage it suffered during the civil war, most of this skin is gone.

A historic monument that hovers above Monrovia, the masonic temple was likely the site where decisions affecting the entire country were debated and finalised, as members of the True Whig Party, which dominated Liberian politics from the 1870s to the 1980s, were often Freemasons.

Initially a small village that gained its name in 1901, Yamoussoukro became the political capital of Ivory Coast in 1983, while the port of Abidjan remained the country’s economic capital.

The reason behind the relocation of the coastal capital to a more central, inland location was not only to emphasise the prosperity and national identity of the country away from the former colonies, but also that the location was the birthplace of the then head of state, President Félix Houphouët-Boigny.

The master plan for the new city was drawn up by the Tunisian-born architect Olivier-Clément Cacoub in the 1970s and early 1980s. It was an attempt to combine a great city and a village in the form of a new town made up of a collection of modern villas.

Olivier-Clément Cacoub designed the Hôtel Président in 1980, three years before the city was appointed the Ivory Coast capital.

As the first building in Ghana to have been awarded a four-star rating by the Green Building Council of South Africa, One Airport Square draws equally on the themes of globalisation, sustainability, and tradition.

The Italian and Ghanaian architects constructed a diagrid exterior in homage to the patterns on the palm-tree bark, and of the style of rural homes in northwest Ghana. The frame is structured to support Accra’s seismic sensitivity, and the projected terraces shield the large office windows from strong solar-rays.

As a multi-purpose edifice, the recently completed building boasts offices, cafes, and restaurants, as well as a sculpture by the local artist Kofi Setordji in its piazza. One Airport Square has become the landmark of Accra’s new architecture landscape.

The Bank for Investment and Development (EBID) is a landmark building in Togo’s capital city Lomé. It consists of two elements, connected by a bridge symbolising the link between the fifteen member countries of the Economic Community of West African States (ECOWAS).

Thes thirteen-storey building rests on a basic structure composed of fifteen elements, which also stand for the member countries. It is dedicated to African women, as represented by a three-metre-wide sculpture depicting three figures, a mother, a sister, and a daughter.

The patterned conference room rotunda suggests an inverted gourd and a fountain makes a feature of the essential element of water. The project is one of Atepa’s personal favourites and he later applied the same architec­tural and symbolic gesture in his design for Yundum International Airport in Banjul, the Gambia.

According to the architects, the aim of this residential complex was to not only to create a luxury compound in the increasingly expanding city of Cotonou but also to reinterpret African identity through reinventing the local contemporary style.

The team of Italian architects, consisting of Alfonso Femia and Gianluca Peluffo from the practice 5+1AA, succeeded in their aim, although the inspiration behind the roadside walls appears to originate from northern Africa.

The closed and solid-looking exterior walls are painted an intense shade of red, therefore generating a stark contrast to the glistening white buildings within the complex. These internal structures are pierced by unevenly distributed square windows with cedar frames, giving the residential buildings a decidedly unique, varied, and picturesque appearance.

Demas Nwoko’s approach to architecture is through art and combines modern elements with a Nigerian vernacular architectural language. Though he was not formally trained as an architect, his works embody his in-depth understanding of the nation’s architecture and its heritage. This can be seen in the chapel he created for the Dominican Institute.

The Dominican Chapel also includes sculptural elements such as carved timber columns and elaborate metalwork on the balustrades and gates. Situated at the site’s highest point and accessible by way of a steep road off the main Ibadan–Oyo Highway, the house of worship is a prominent landmark.

The chapel was consecrated in 1973 and four years later in the journal of the Royal Institute of British Architects, architecture critic Noel Moffat said: “Here, under a tropical sun, architecture and sculpture combine in a way which only Antoni Gaudí perhaps, among architects, has been able to do so convincingly.”

The post Architecture highlights in Western Africa along the Atlantic Ocean Coast appeared first on Dezeen.