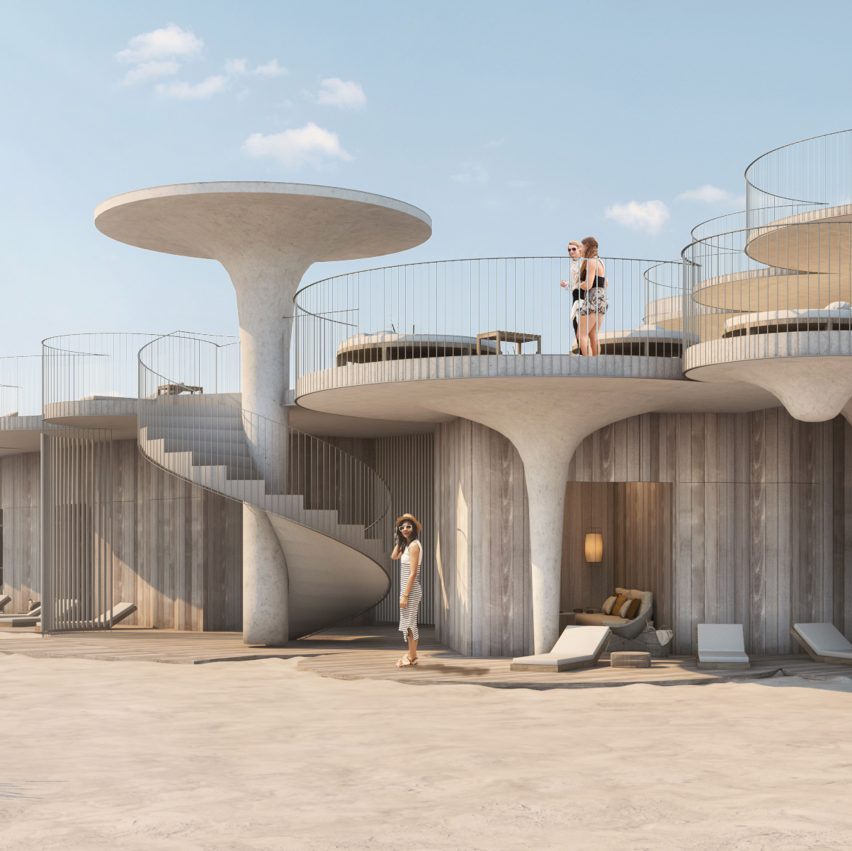 Design offices including Esrawe Studio and Rojkind Arquitectos have unveiled plans for Asbury Beach Club, a resort in New Jersey that will feature sand-coloured concrete sunshades.

The club is located on the Atlantic Ocean in Asbury Park, a seaside town on the Jersey Shore coastal strip of New Jersey in the USA.

Asbury Beach Club will include two sites on the beach, a public lot on the north side and a private lot on the south side.

Due to the beach club being built on a floodplain with a zoning height limit, the building has been designed to be low-rise.

Held up by umbrella-shaped concrete columns, the development’s roof doubles as an elevated pool deck reached via various staircases.

Changing rooms, exclusive cabanas and an outdoor sand gym will be housed on the private lot’s lower level.

“This enclosed lower level is [going to be] clad in reclaimed wood to match the original boardwalk,” said Esrawe Studio, which was named interior design studio of the year at Dezeen Awards 2020.

The concrete columns will extend to the public north side of the club, where a cluster of them will form a shade canopy.

Underneath the canopy, there will be seating and other public amenities, including showers and restrooms.

Sculpted from sandy-coloured concrete, the development’s curved shapes will echo formations such as sea caves.

“When water, wind, sand and rocks interact, they alter the morphology of the earth to create niches, cavities and semi-open spaces interconnecting land and sea,” said Esrawe Studio.

A privacy screen composed of precast concrete cylinders mounted on a thin steel frame designed to look like beach grass will be built on the building’s west side.

To ensure maximum privacy for guests, this screen will extend 8 feet (3 metres) above the pool deck on the side facing the street.

The screen’s precast cylinders and steel frame will taper along the north and east sides of the building until the screen is only a thin metal railing on the beach, providing open views to the sea.

Other projects informed by their surroundings include a stone-clad house in a woodland close to Antwerp which is reflected in the large pond that it overlooks, and a lakeside house in Sweden clad with pine slats to match its forest setting.

The post Asbury Beach Club on Jersey Shore will be formed from sandy concrete canopies appeared first on Dezeen.