A curved concrete staircase weaves around a sloping garden that rises through the centre of this house in Buenos Aires designed by local studio Bam! Arquitectura. 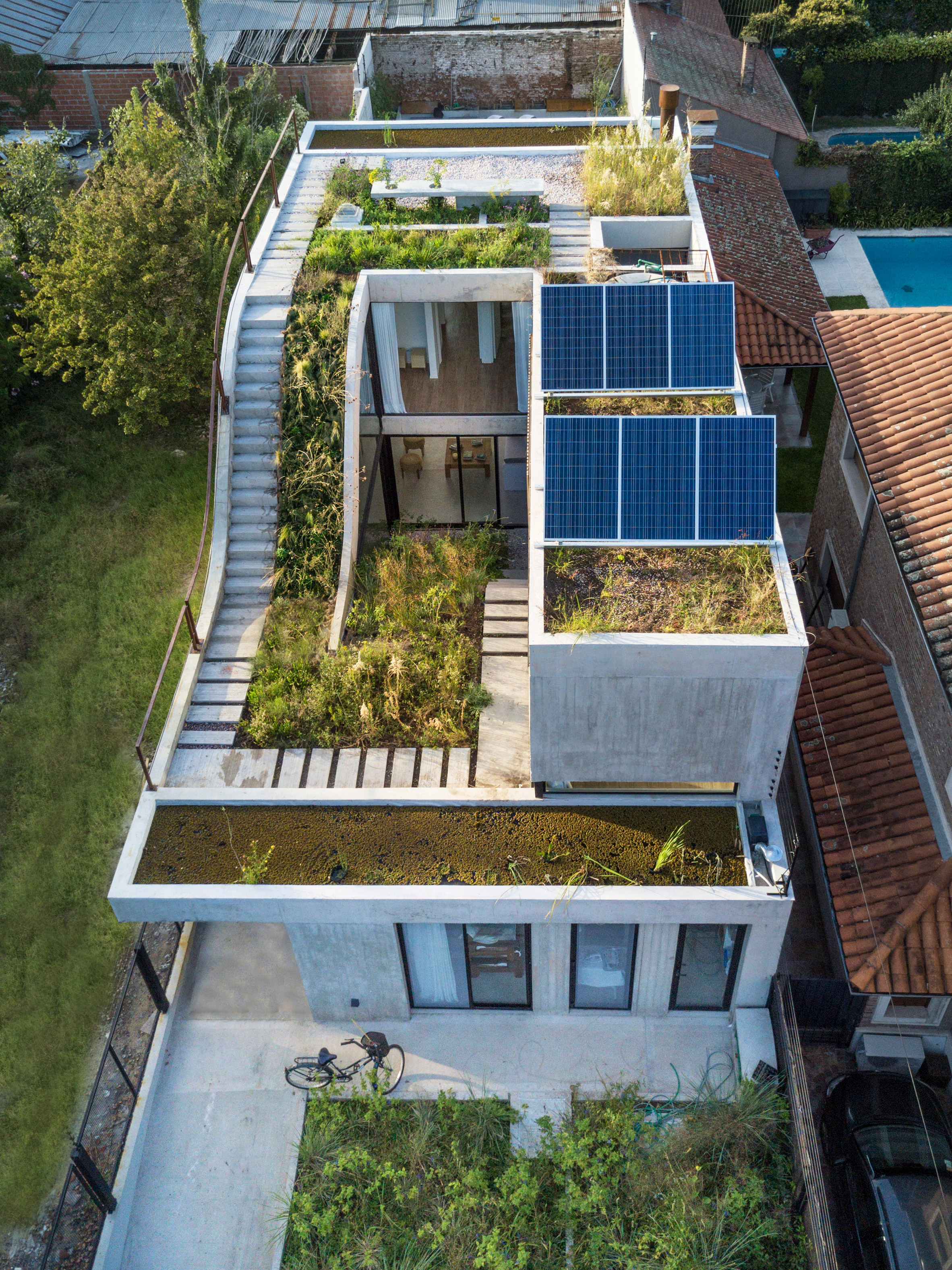 House MeMo occupies a site in a densely packed area of San Isidro, a municipality located in the north of Buenos Aires province, which the architects wanted to fill with greenery. 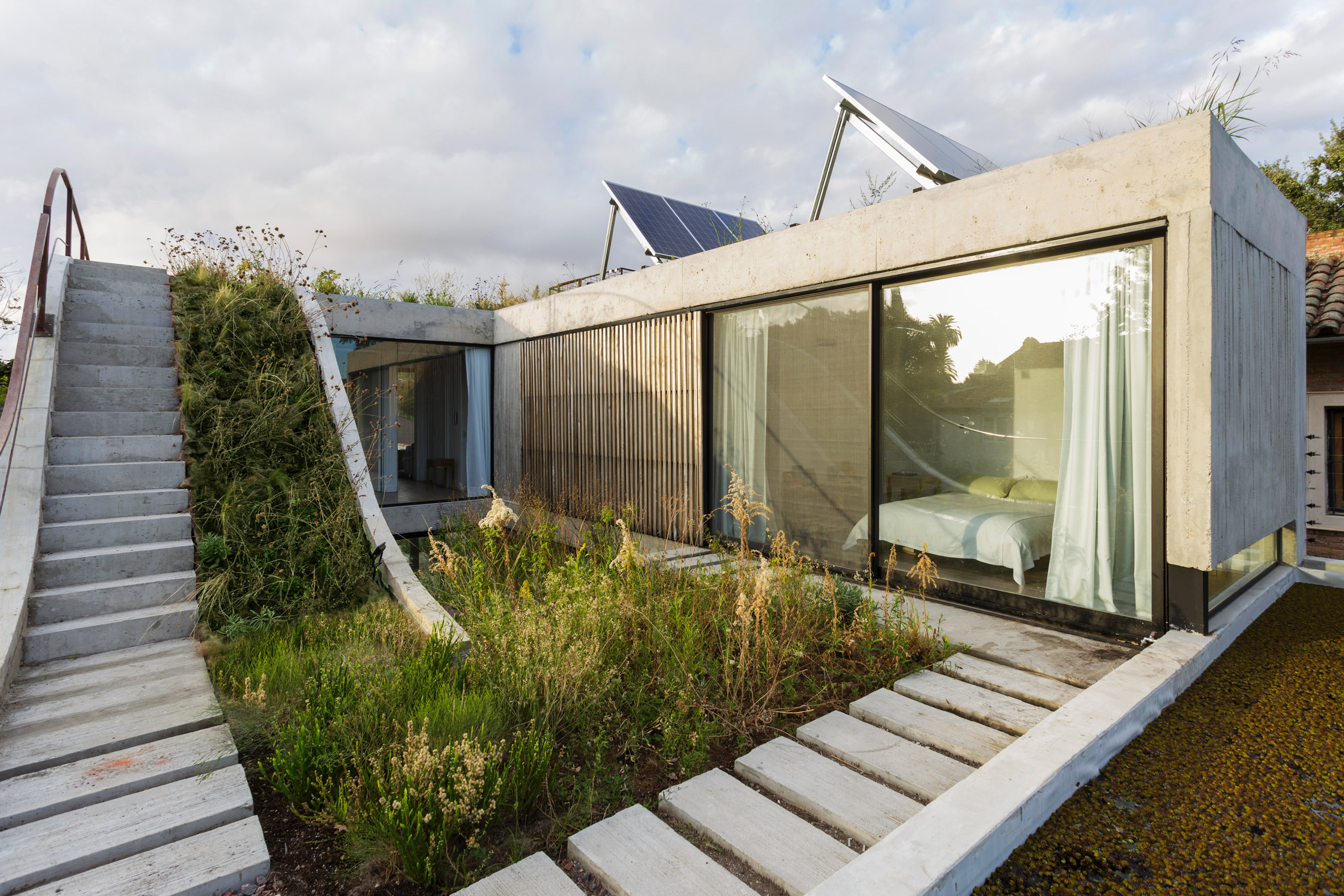 Planted with native vegetation, the ramped garden at the centre of the two-storey house is adjoined by the main stairway, which leads from the entrance ground floor to the roof garden on different levels. 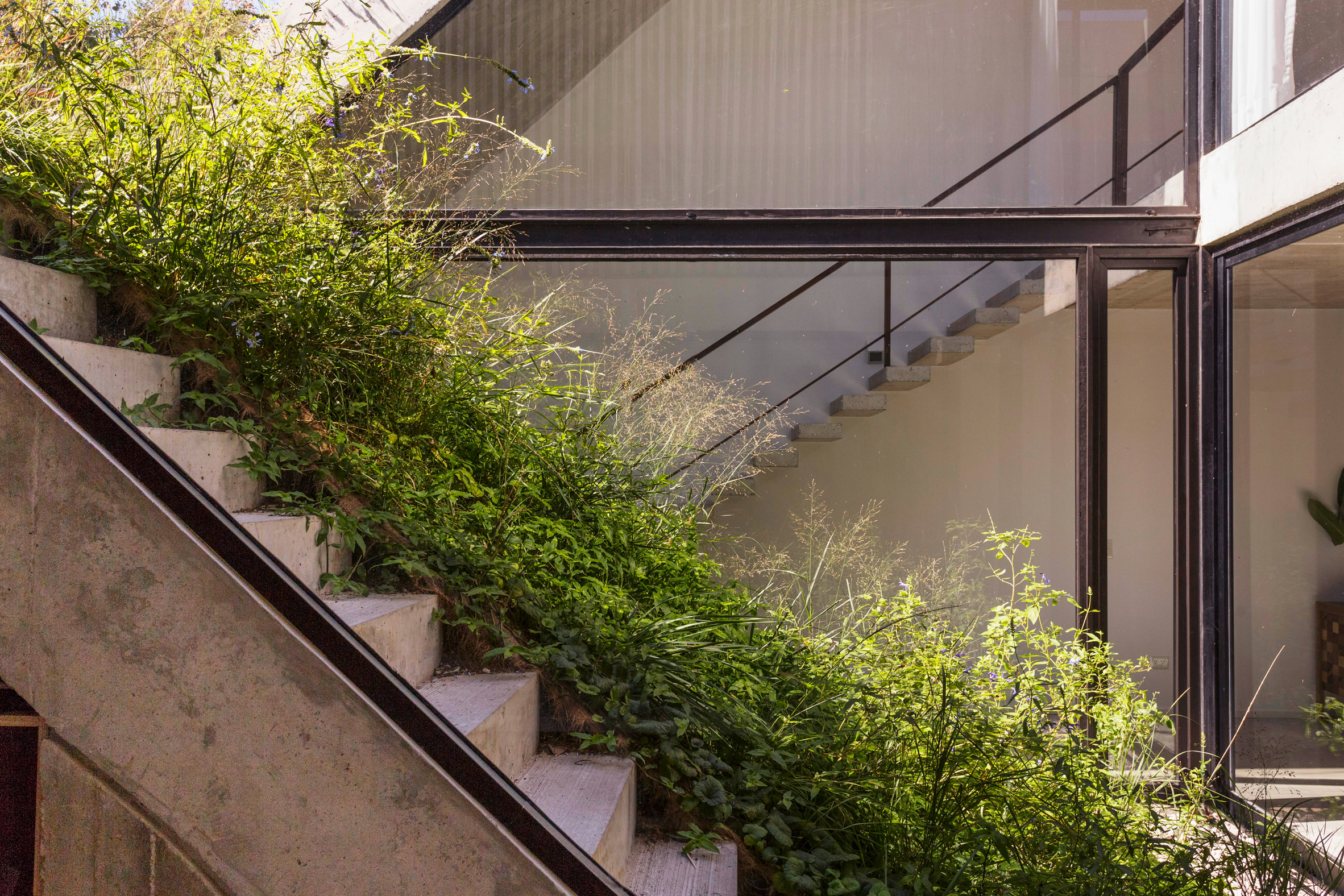 “The premise was to develop a project in a plot between infill buildings, while reducing to the maximum extent possible the loss of green spaces due to the construction of the house,” said the architects. 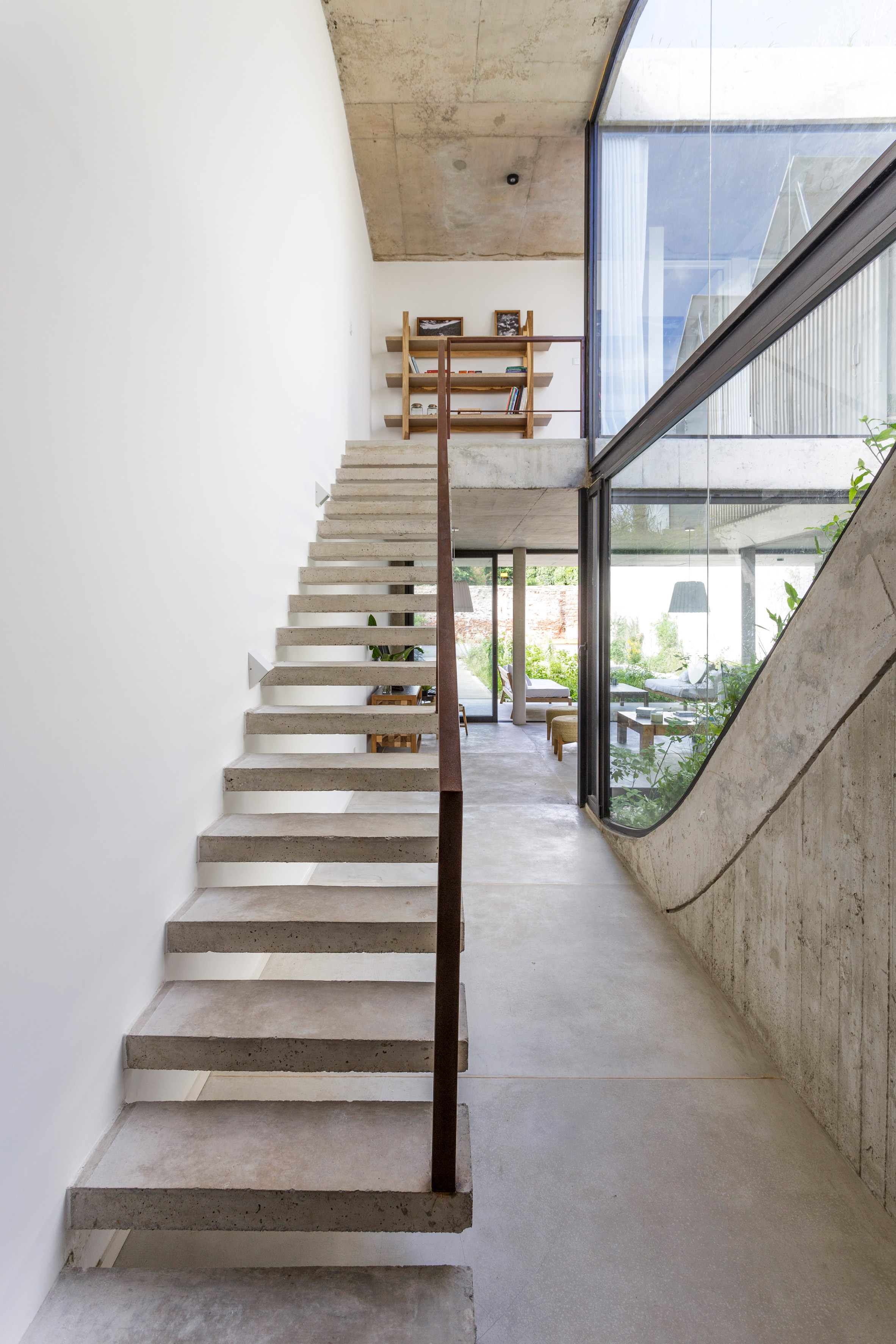 “With such a concept in mind, we at Bam! decided to work on architecture and landscape simultaneously,” they continued.

“The square metres of the building footprint turn into a three-dimensional garden, which connects all the architectural floors.” 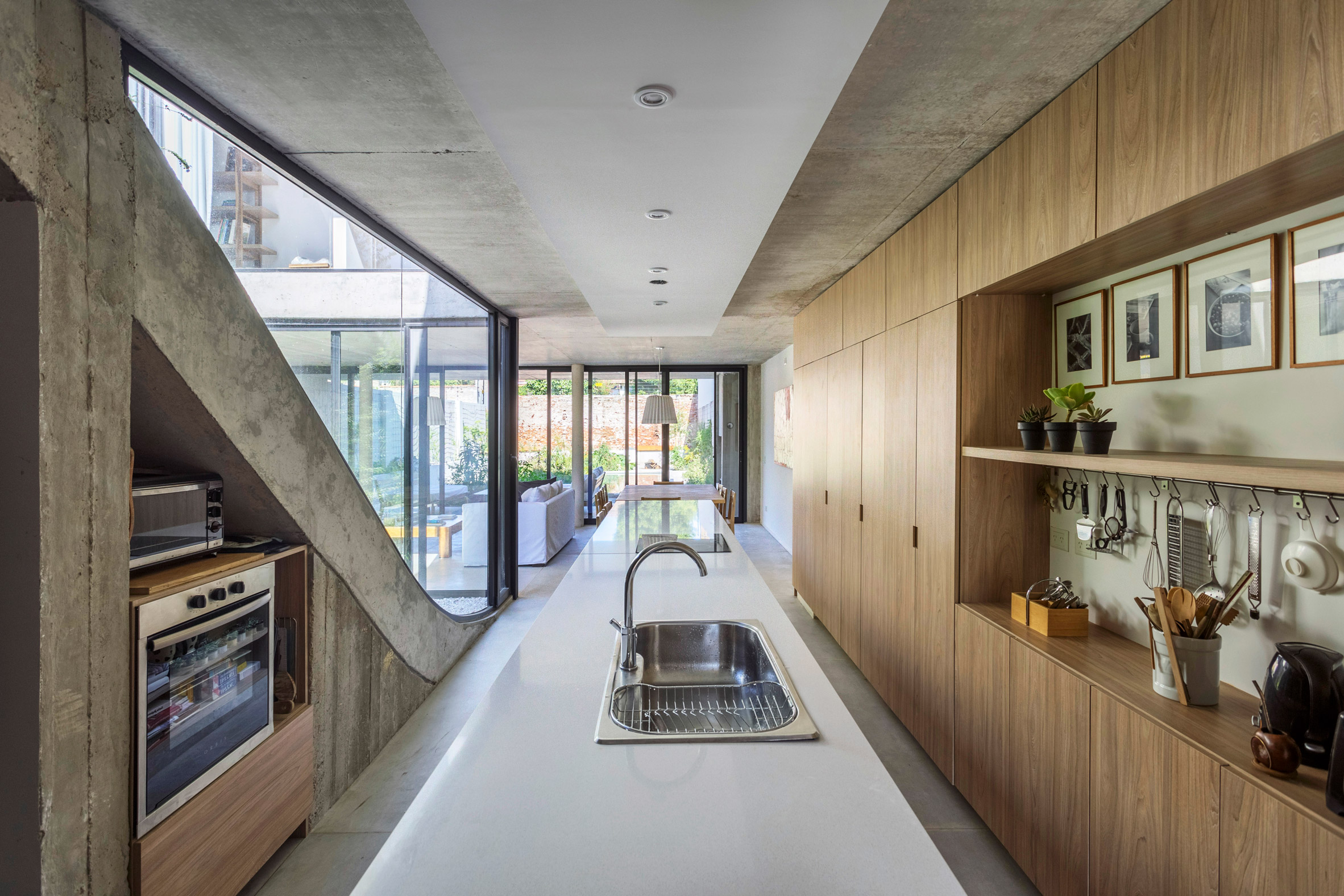 On the flat levels, the concrete staircase is matched by paving stones. The route culminates in a terrace at the top of the house, landscaped with gravel and fitted with a bench for the resident to sit and appreciate the surroundings.

In addition to the abundance of greenery, other environmentally friendly features include a series of vegetable plots for the resident to grow her own food. 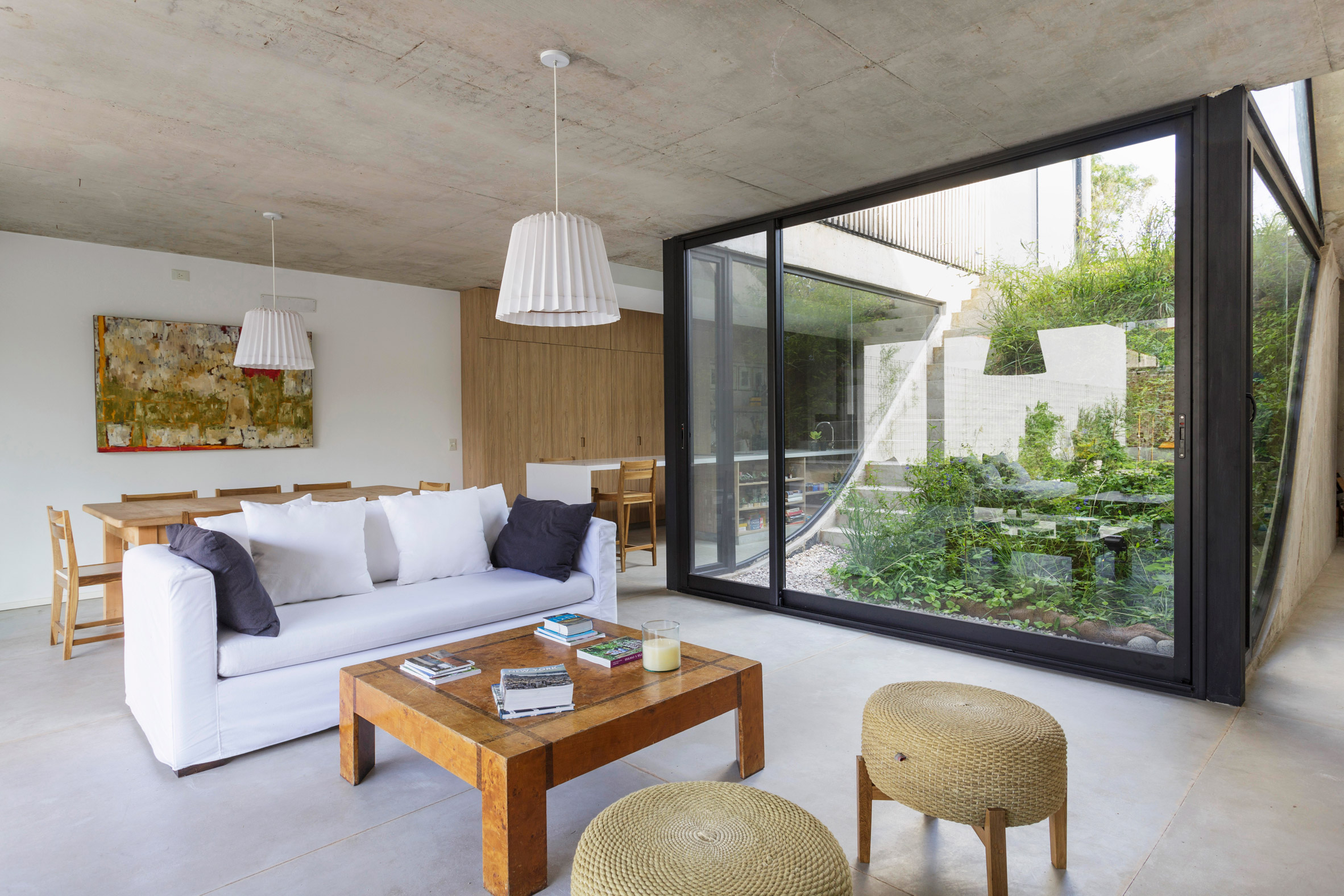 Solar panels on one of the rooftops provide electricity, while rain water is collected to irrigate the vegetation.

The spaces of the house are arranged around the garden that is carved into the centre of the house. Large windows surrounding it help to bring plenty of natural light into the rooms. 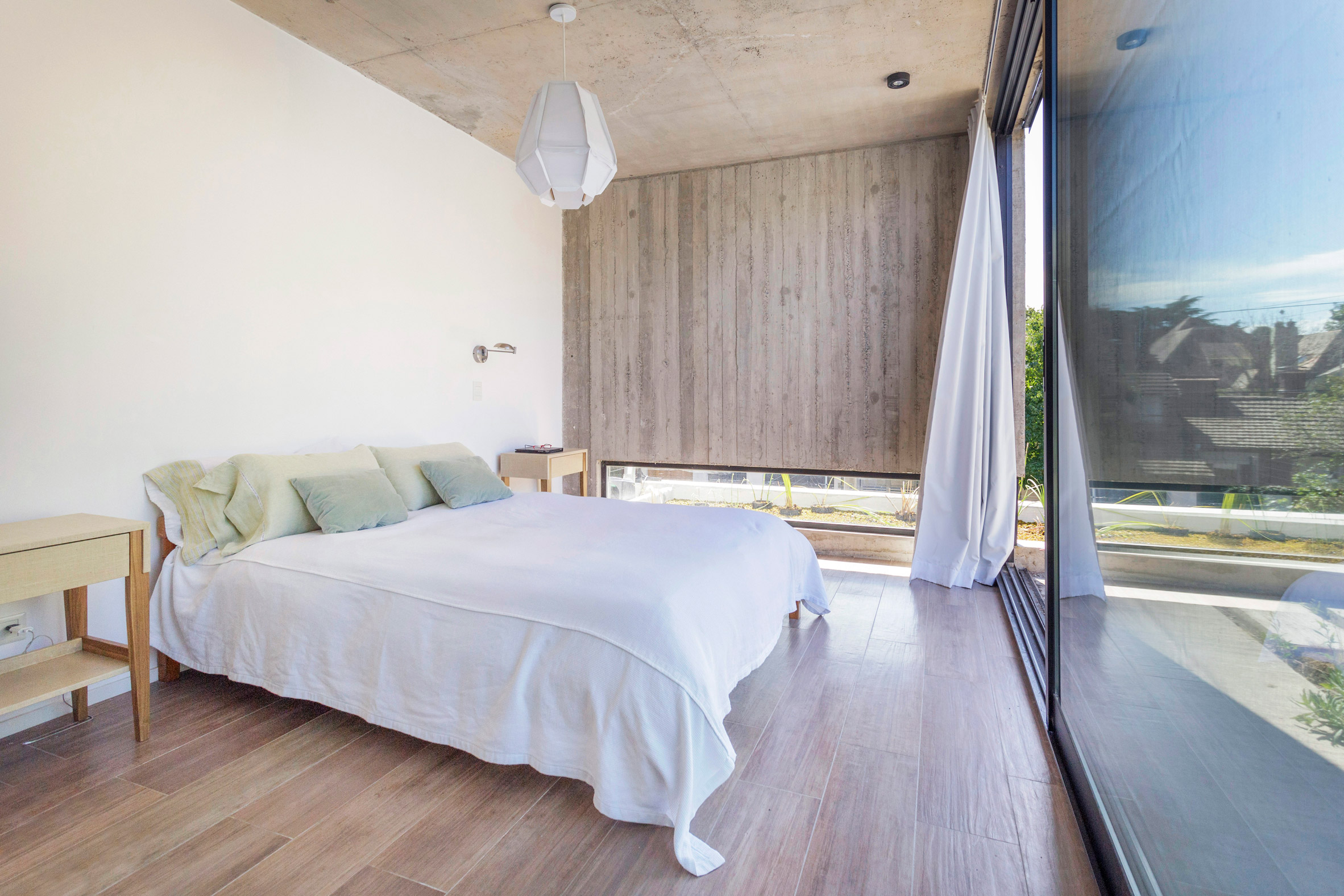 “In order to provide an ideal indoor environment, our design is based on having the same amount of natural light in all the areas of the house, cross and controlled ventilation, and constant open views to the garden, which provides a better thermal comfort,” explained the architects. 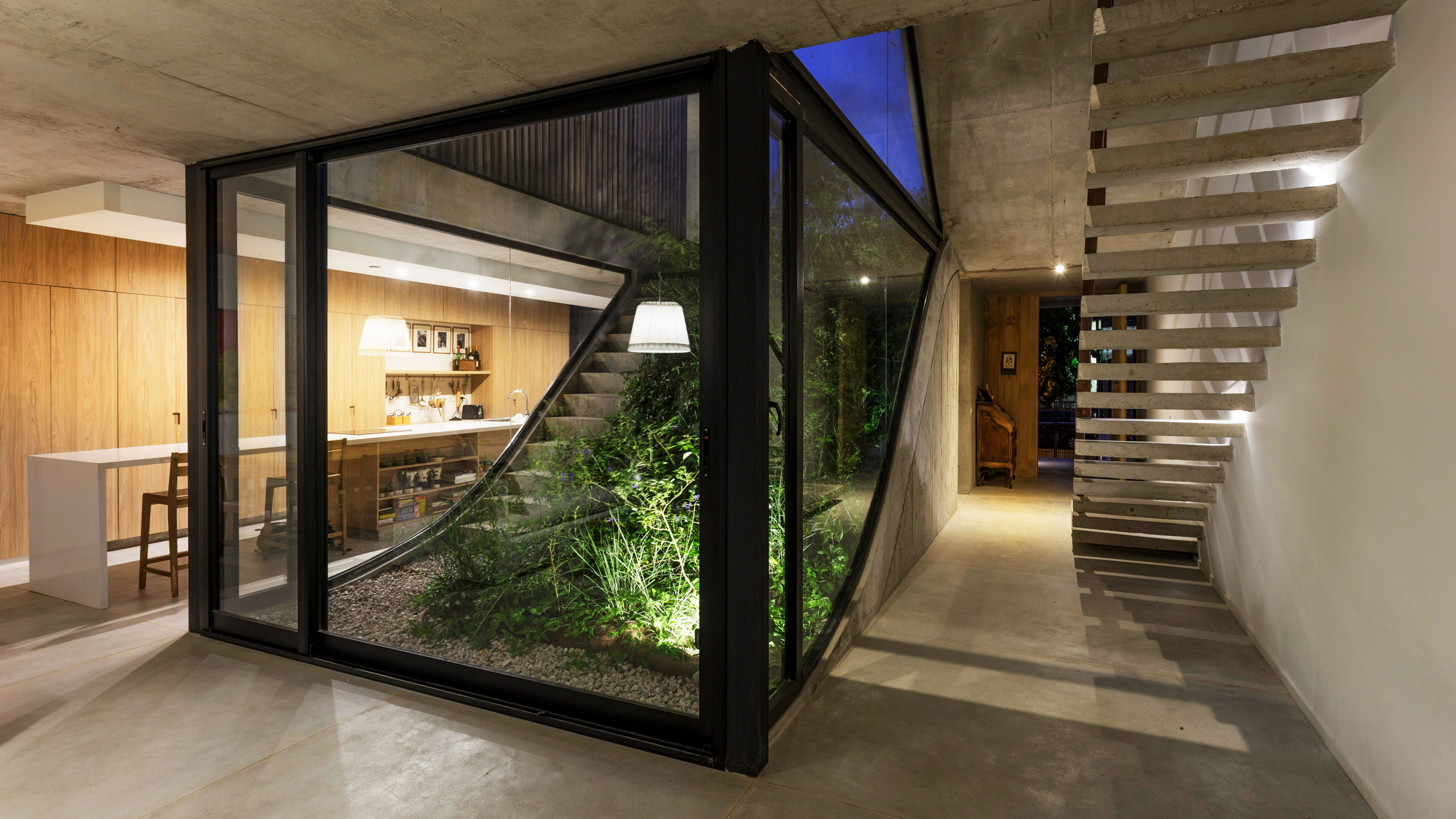 The owner, a single woman, lives alone most of the time but also has sons who regularly visit. This prompted the architects to create an open-plan space on the ground floor for socialising.

On this level, the living and dining areas both face into the central garden and open to the long back garden where there is a swimming pool, a fire pit and lots of planting. 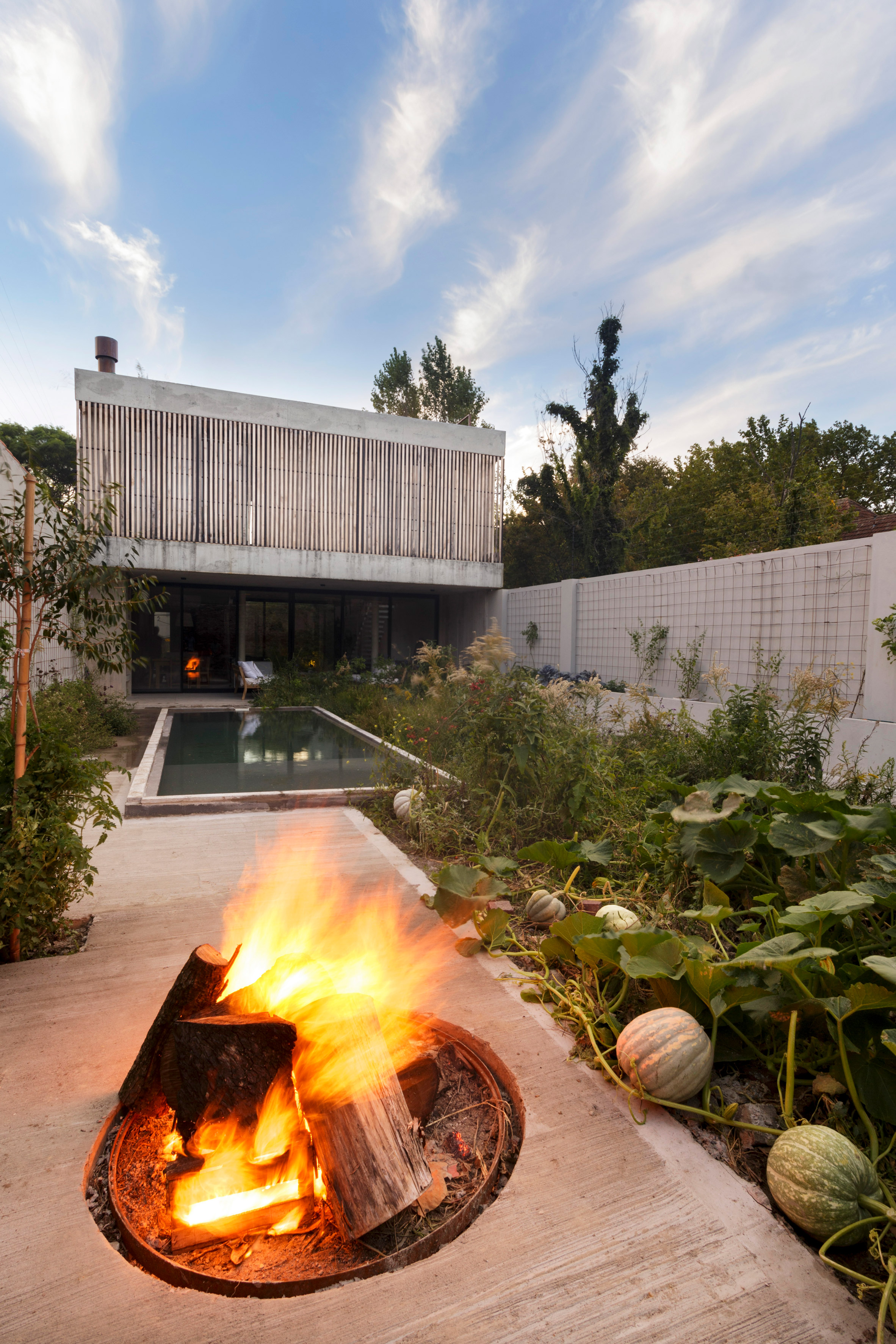 The kitchen is naturally illuminated by a curved window slotted above the exposed concrete wall of the garden. Some of the kitchen appliances are fitted into the frame, while others are integrated into the long white central island and wooden storage cabinets along the back wall.

Bedrooms are located on the first floor. The master bedroom, complete with an en suite bathroom faces onto the central garden, while two further bedrooms at the rear overlook the back garden. 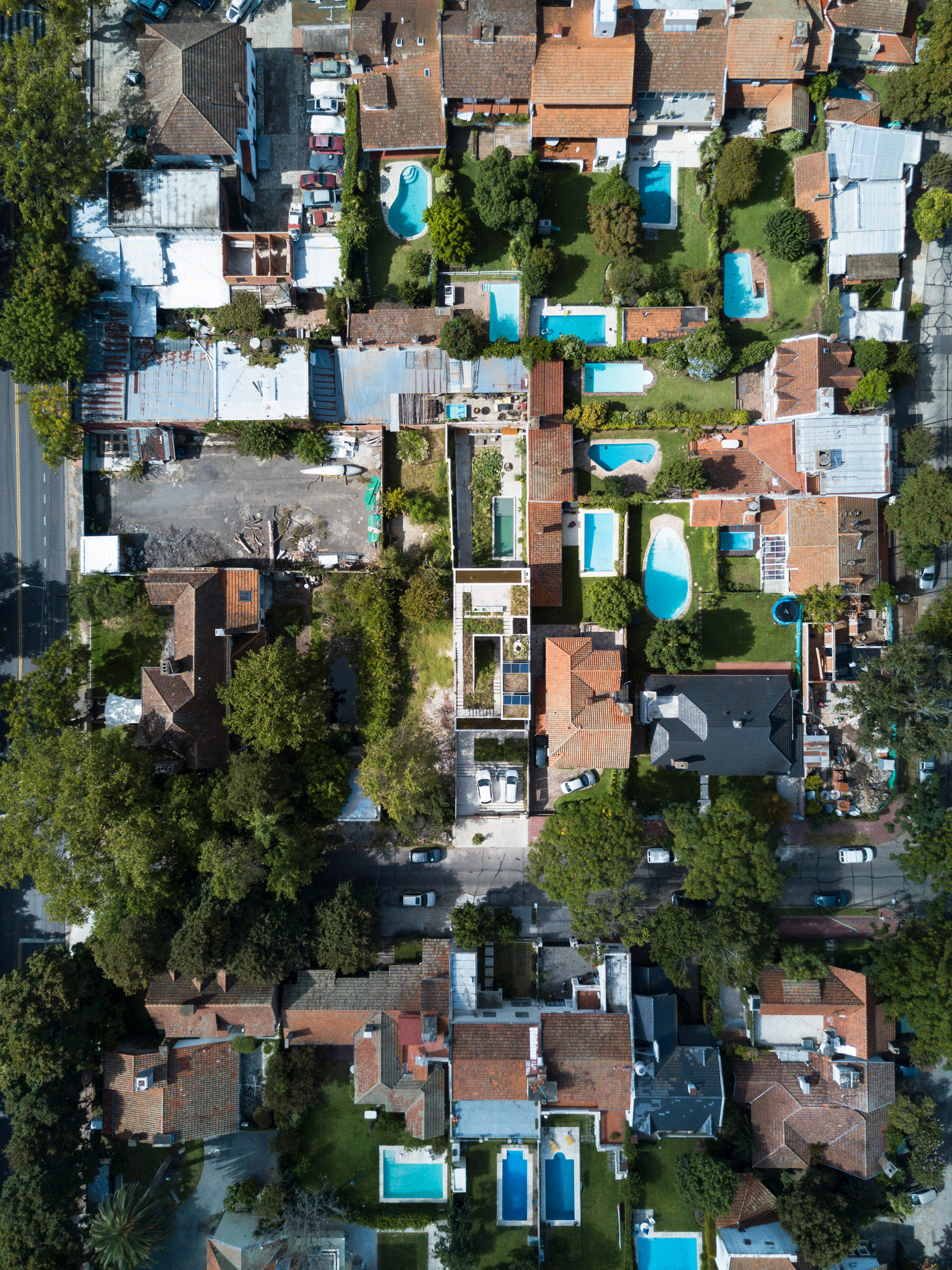 Other recently completed houses and extensions in Buenos Aires including a skinny corrugated-metal home by CCPM Arquitecto and a greenhouse-like structure by Adamo Faidon set over the top of a trio of 20th-century houses. 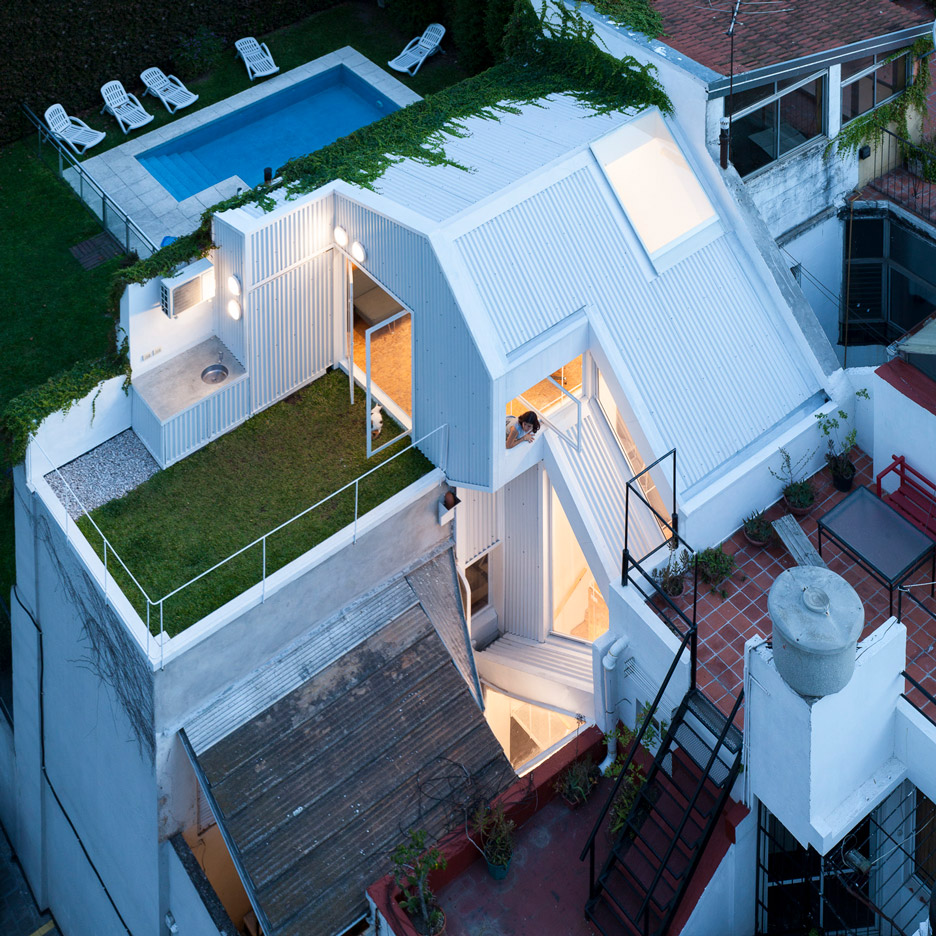 Photography is by Jeremias Thomas.