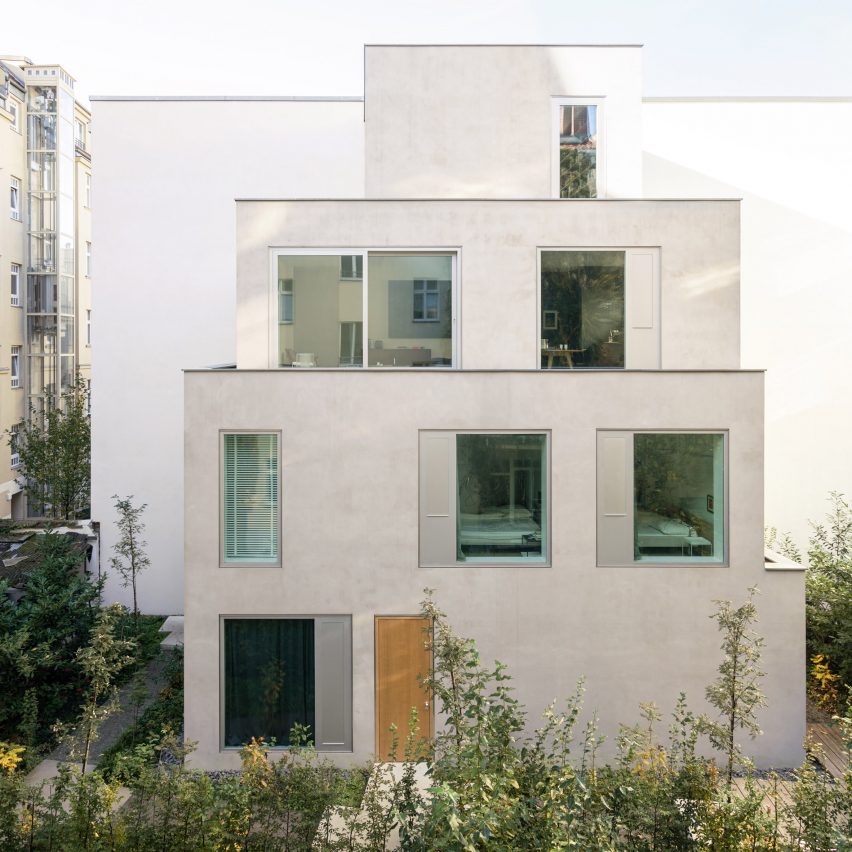 Located in Mitte, a borough in central Berlin, RHE42 is a 190 square-metre design that contains two apartments and was built against a large fire wall within a typical Berlin courtyard.

Berlin is suffering a housing shortage, and the building was created as one solution in which unused space can be used to build homes and fill remaining spaces in the centre of the city.

“Due to the severe housing shortage in Berlin, densification is a big issue,” Batek Architekten founder Patrick Batek told Dezeen. “You can either add on top of houses or use the remaining space in an inner courtyard like here. To build in a courtyard with very limited access was a big challenge.”

The studio used three stacked cubes to create the form of the building, with each box smaller than the previous to give the design a tapered effect.

Terraces were formed on each level by using offset space around the staggered and stepped cubes.

The exterior is covered with a grey render that complements pale hues of the neighbouring buildings and adds a subtle texture to the facade.

Floor-to-ceiling windows are framed by metal trim and sit flush against the exterior walls, while wooden doors provide a warm contrast against the pale render.

“In order to emphasise the character of the simple boxes, it was important that the windows and doors are flush on the outside,” said Batek.

“The outside and inside the design shouldn’t be too cold or sleek,” he continued. “Therefore we worked with exposed plaster on the outside which does not have the perfect look but has a certain depth.”

The design of the building’s exterior was created as a kind of blank canvas for the interior.

“Usually we work as interior designers so the idea was to create a very simple and reduced architecture that provides the framework for the interior design,” Batek explained.

Concrete platforms leading to entrances reference a period of the home’s construction when the contractors placed wooden boarding on the site’s muddy floor, creating subtle geometric shapes that the studio then recreated in concrete.

A 60 square-metre apartment containing an open-plan kitchen, living and dining area, a bedroom and bathroom spans the ground floor.

Above it, a larger 130 square-metre apartment extends across the upper three floors and is accessed by a ground-floor entrance beside the firewall.

Inside the larger apartment, functions have been divided per floor to create a coherent and organised floor plan. A guest bedroom and a master bedroom with an ensuite are found on the first floor, while the upper levels host the social spaces.

Natural oak flooring was used throughout the interior to bring warmth to the space, while the walls were painted white to add brightness to windowless spaces.

Grey cabinetry and feature walls zone the kitchen in the open-plan living space. Dark terrazzo countertops were used to add “depth and haptics.”

A double-height ceiling opens up into the third stacked cube, which doubles as a mezzanine, allowing light to flood into the multifunctional living space.

A walnut balustrade sits above the open-plan living space on the mezzanine level which leads to an outdoor terrace.

Batek Architekten was established in 1999 by Patrick Batek and the studio works across interior design and architecture. In 2018 the studio completed a gallery-like backdrop for Zalando’s beauty store in Berlin.

Photography is by Marcus Wend.