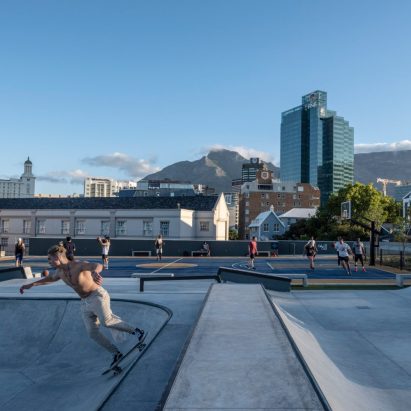 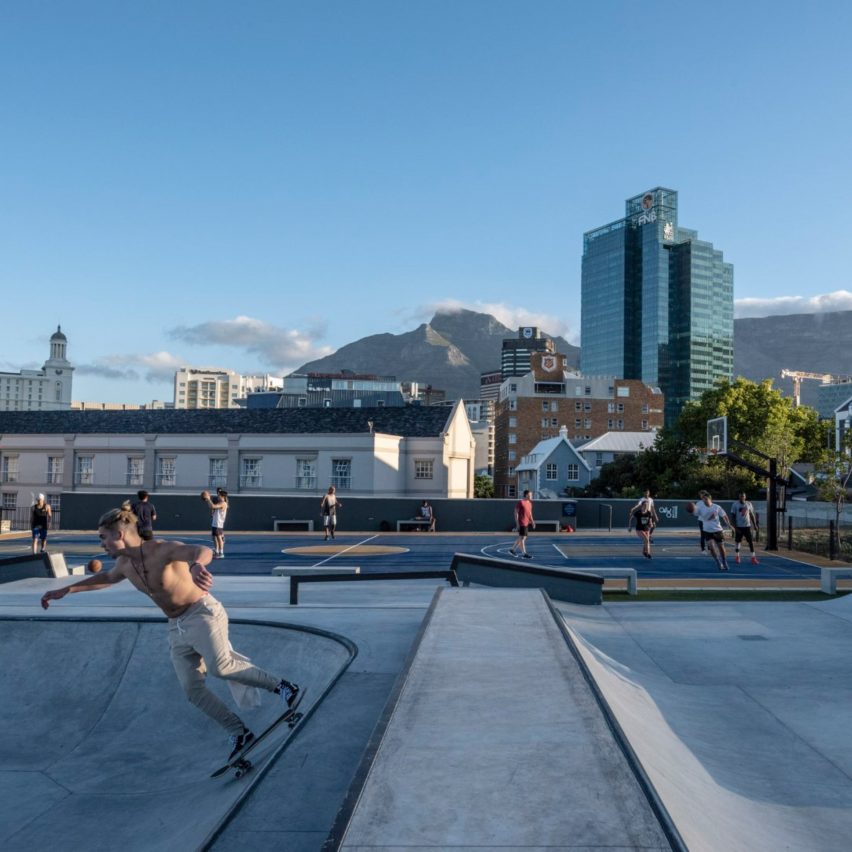 An old coastal fortification in Cape Town has been transformed into an urban park, skatepark and garden by South African studio DHK.

The 12,000-square-metre park Battery Park is located in the high-end V&A Waterfront district, which is also home to the Thomas Heatherwick-designed Zeitz MOCAA art museum. It sits on what was once the Amsterdam Battery, a series of coastal fortifications built in the 18th century. 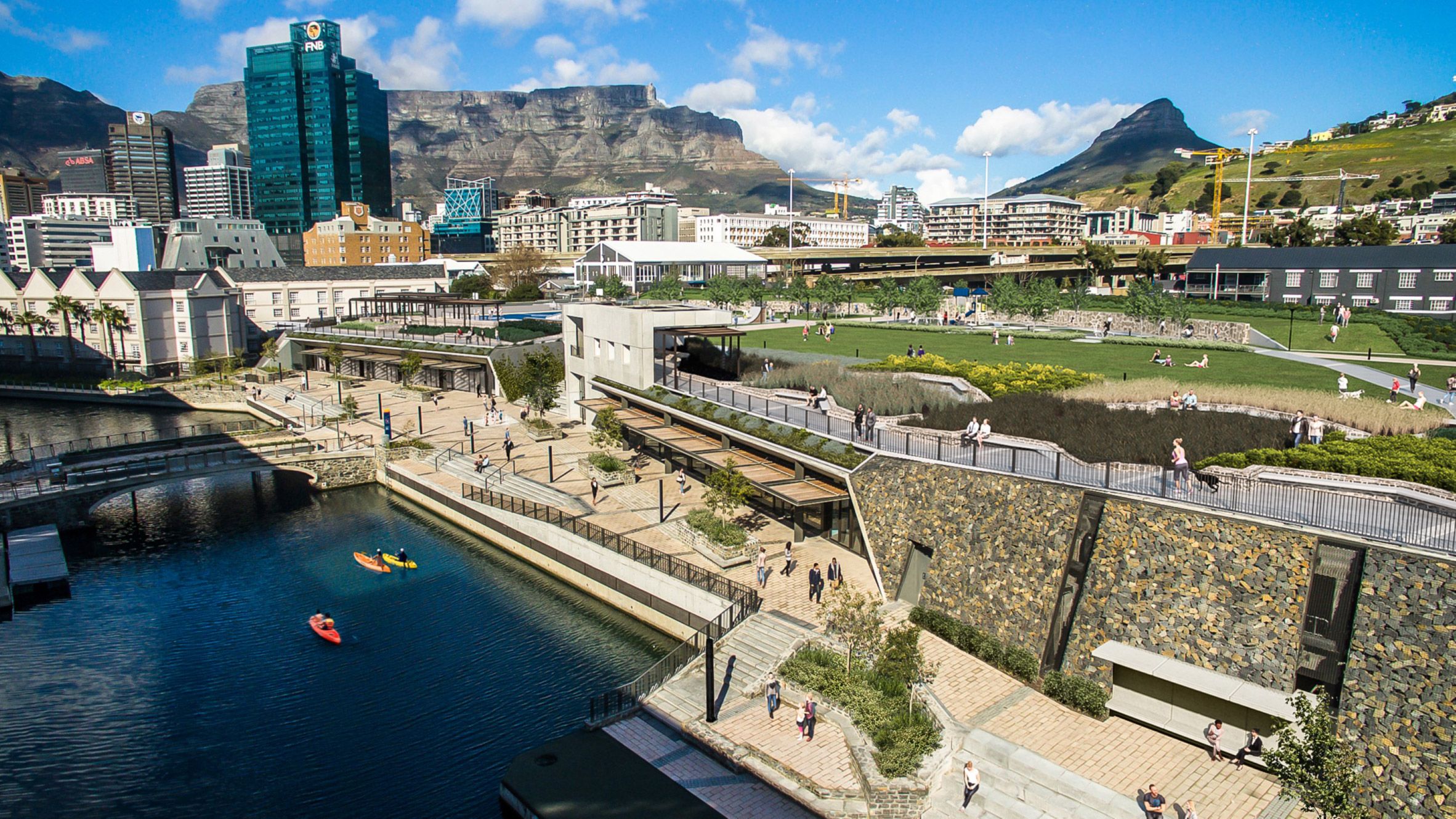 The project forms part of an urban vision developed by architects DHK to transform the underused Canal District, by bringing a greater variety of visitors.

“The intention was to facilitate a new hub of activity within the V&A district whilst being respectful to the heritage of the Amsterdam Battery, once a place of exclusion and incarceration, but now a public space designed to support and engage the greater Cape Town community”, explained lead DHK architect Pierre Swanepoel. 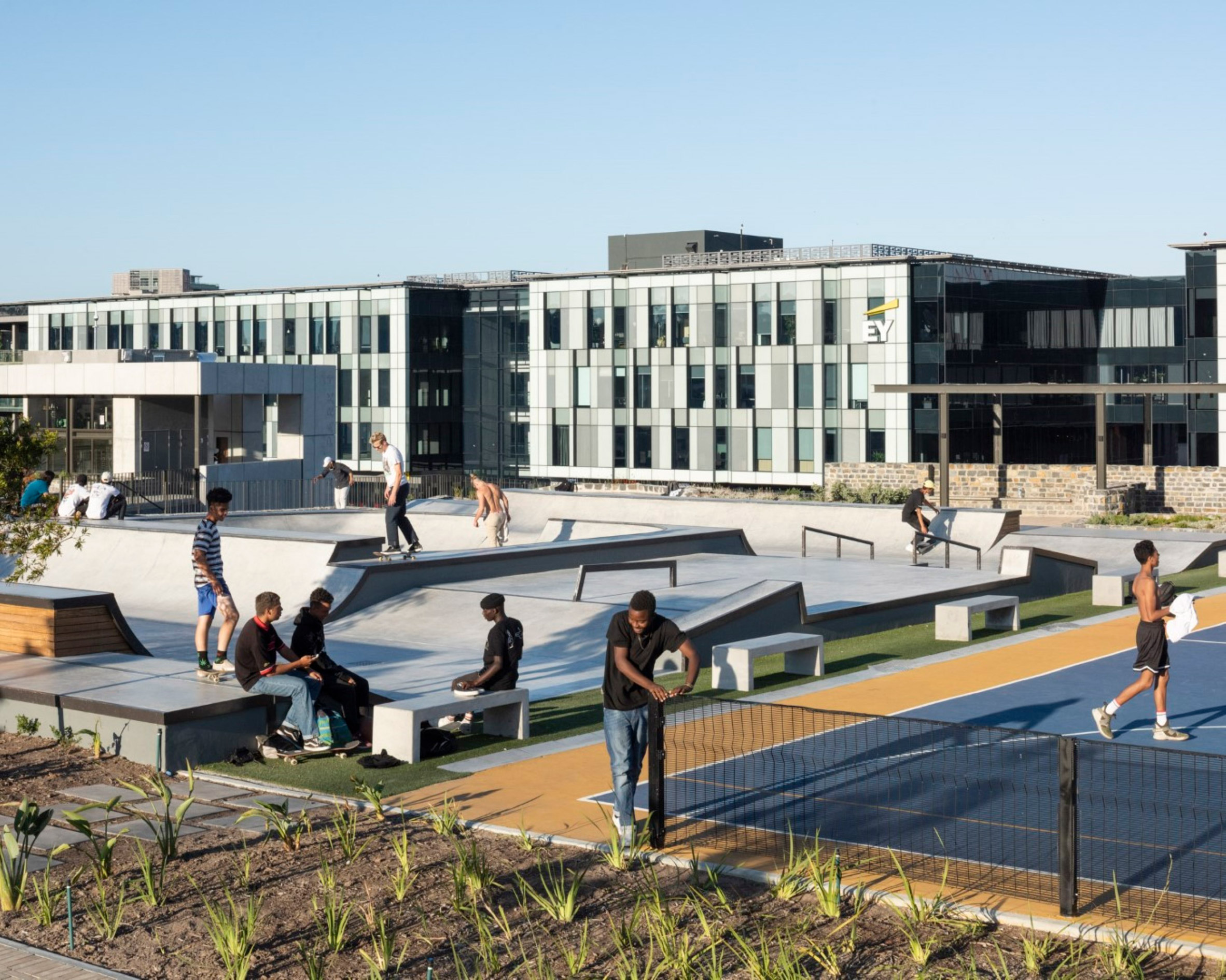 Battery Park includes a concrete skatepark, meandering walkways, in-built benches, a basketball court and new pedestrian routes to and from the V&A Waterfront.

The park, which is free of charge and reachable via the city’s bus and train network, is designed to attract to all of Cape Towns inhabitants and visitors, regardless of their economic class and demographic.

“The V&A Waterfront is one of the most affluent areas in Cape Town and is frequented by locals and tourists. Battery Park does not simply appeal to a higher demographic but to the greater Cape Town community by providing a safe, public space that offers activities, gardens and a piazza – free of charge and for all to enjoy,” said the team at DHK. 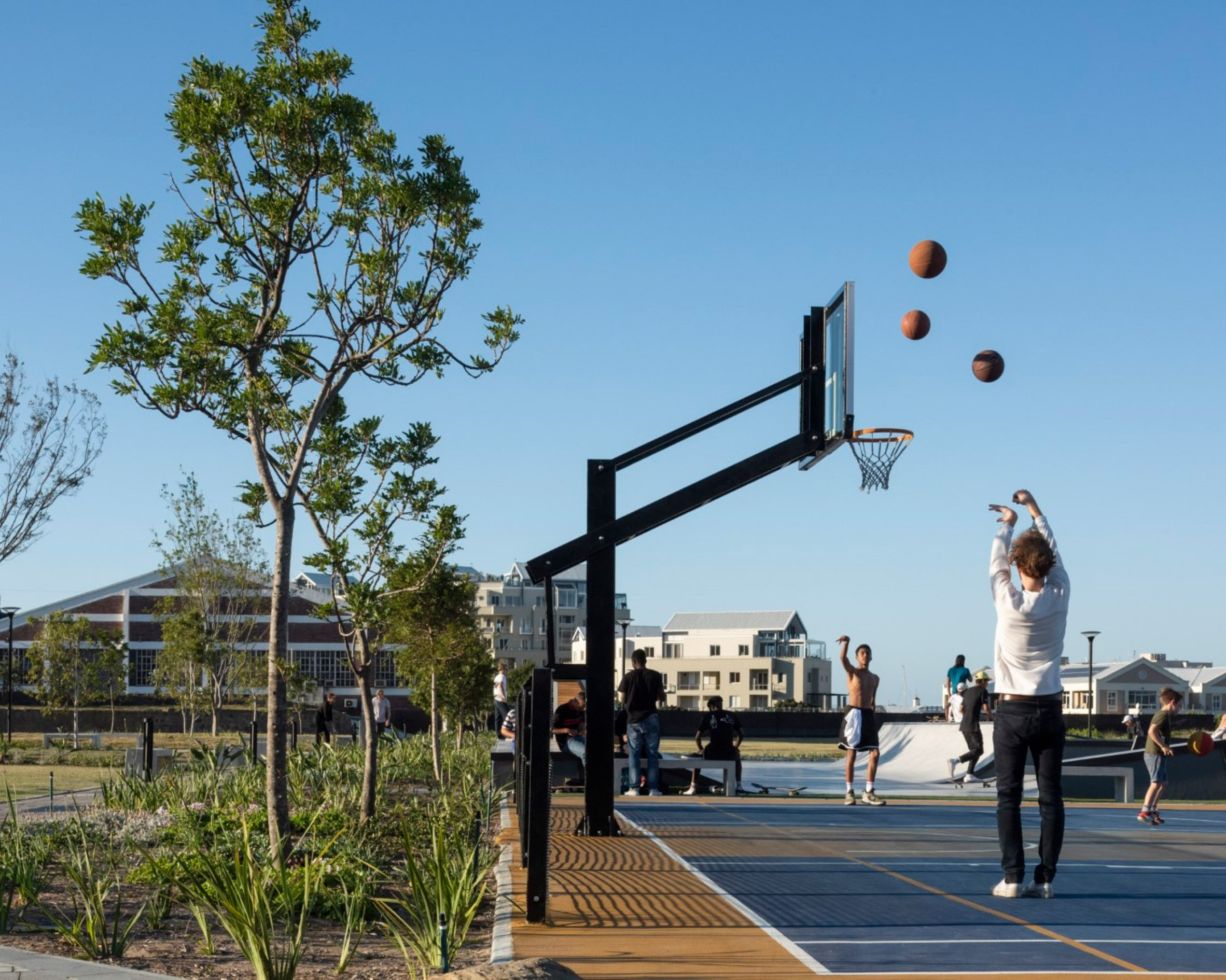 On the elevated park level, visitors can explore landscaped gardens with trees and stone-clad planters. Throughout the park and piazza, cantilevered steel pergolas scale the design and provide shade.

In contrast to the hard landscaping and concrete benches, softer elements like timber have been used for the pergola shading and cladding for parts of the skate park. Planting is placed in certain key areas to creep up the buildings and to integrate with the facade. 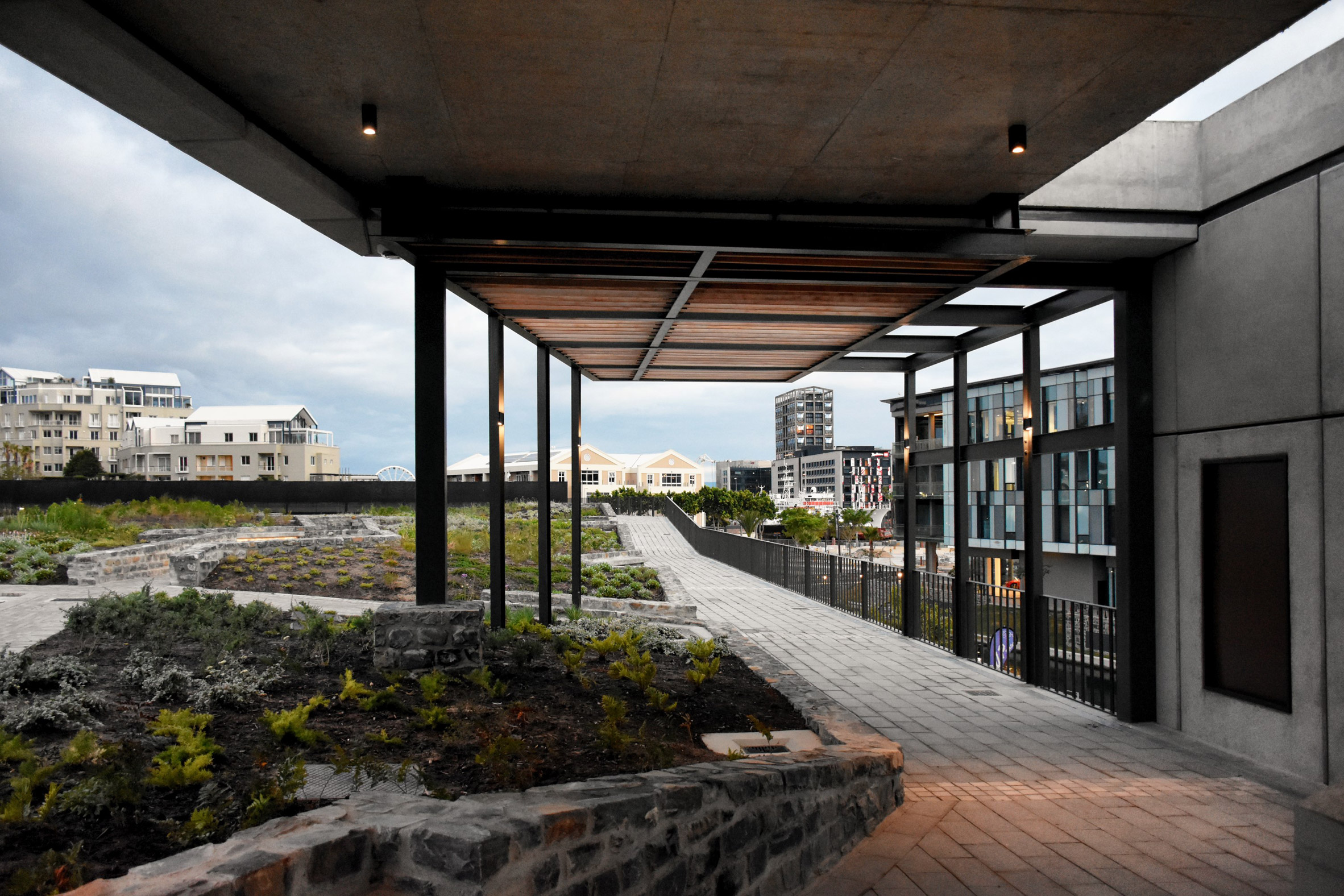 The intention behind the piazza was to activate the canal via a range of water sports and provide a link between the V&A Waterfront and the city centre, encouraging a pedestrianised environment.

Retailers include surf and skate shops, stand-up paddle board rental and lessons, bicycle rentals and retail, a deli and a restaurant cafe. 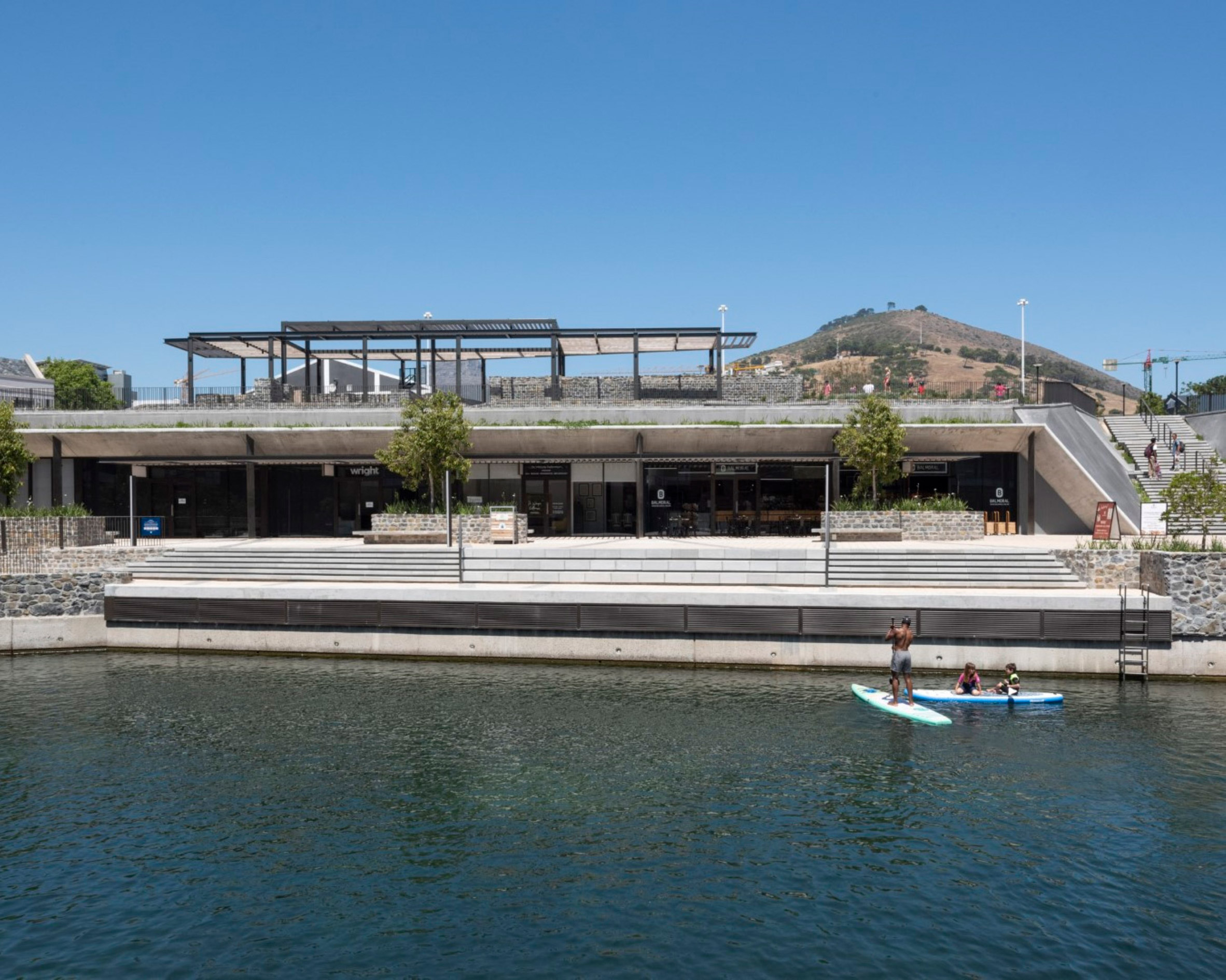 The canal area fronting Battery Park was previously unused, but the architects at DHK hope that the new park will create a more scenic route for visitors engaging in water sports.

Much of the park is constructed using concrete, which the architects described as being a material that represents current construction in South Africa and contrasts with the original stonework of the Amsterdam Battery.

“At present, concrete is generally used in the construction of multi-storey buildings throughout South Africa,” said DHK. “The intention behind the use of concrete is to ensure a clear distinction between the construction periods of the original Amsterdam Battery and the current new additions.” 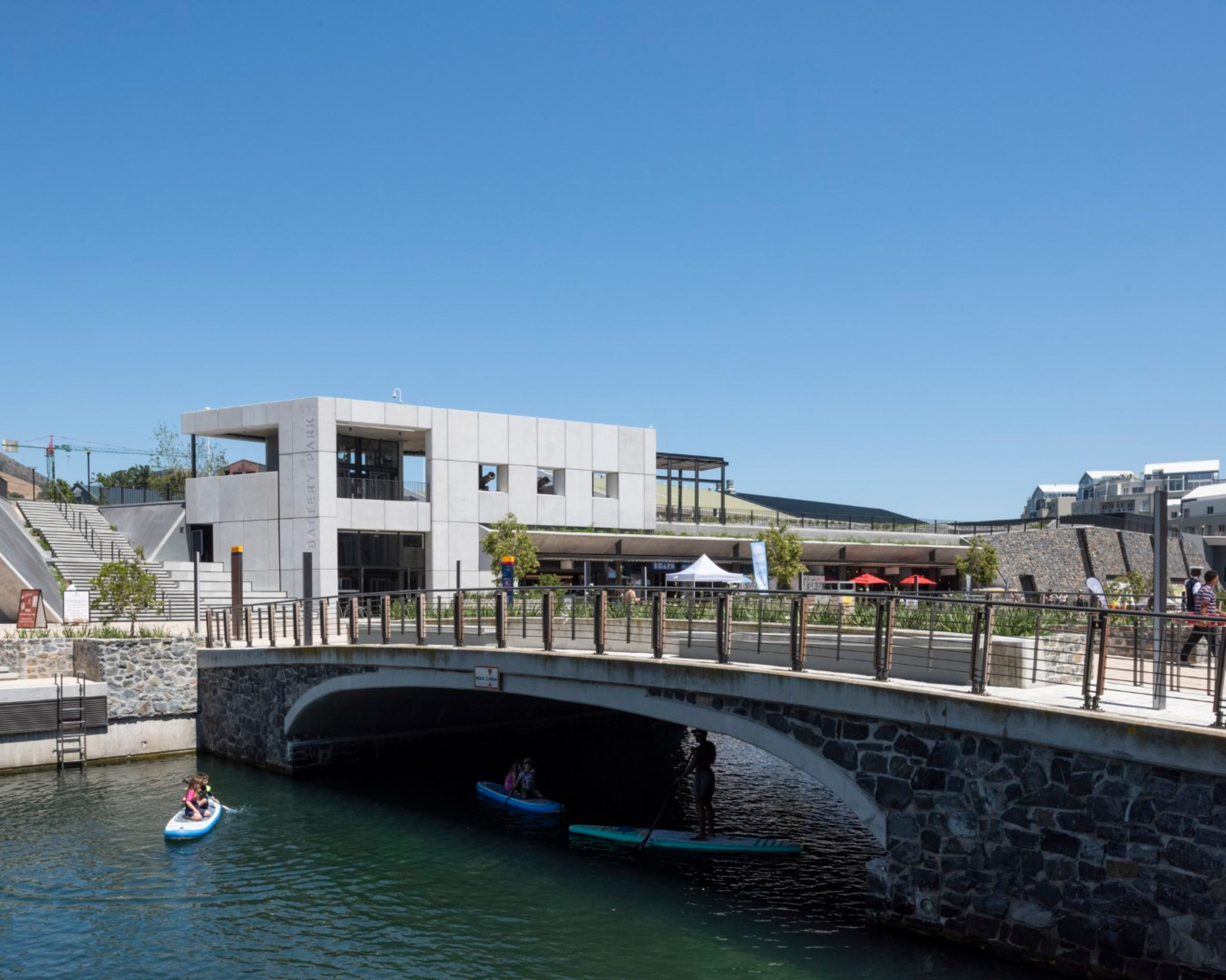 The old Amsterdam Battery was largely demolished in 1905 to make way for a railway that connected the port to the city. The remnants are now eight metres above the level of the canal that runs through the site.

During the construction of Battery Park, archaeological excavations were used to inform the design. All the stone used throughout the park and piazza was excavated from the site itself during construction.

The raised park sits at the battery’s original inner courtyard level. Planted edges that sit above the retail units on the piazza level estimate the natural ground level that would have fronted the original battery. 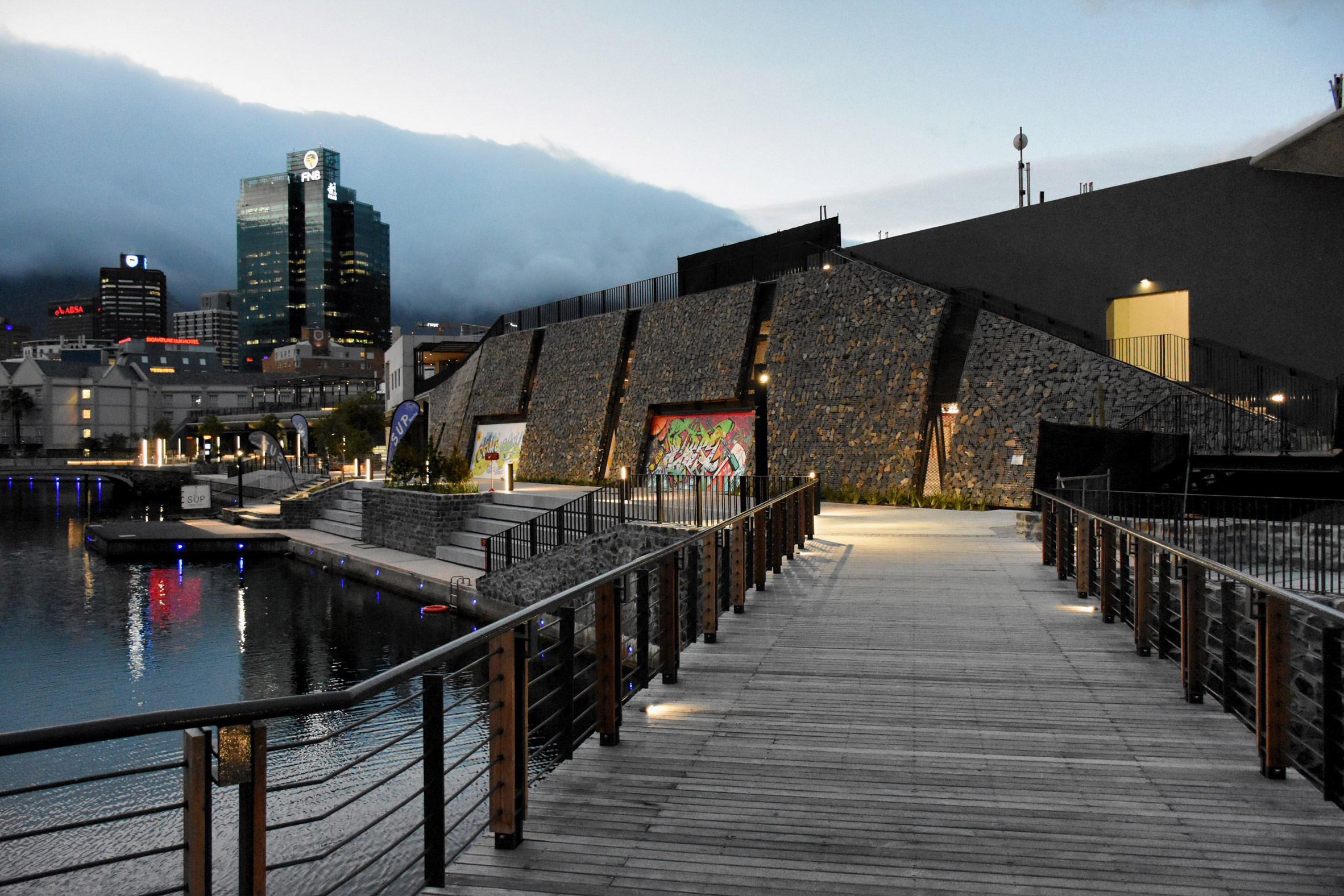 A visual connection to Cape Town’s Noon Gun on Signal Hill has also been retained, preserving the site’s historic sightline.

A concealed parking facility is housed within walls made of loosely packed stone-filled gabions, to reference the battery’s original facade.

Other recent public realm projects completed in Cape Town include a monumental arch that pays tribute to anti-apartheid activist Desmond Tutu, designed by Snøhetta. A plant-filled dome is also expected to open in the city this year.