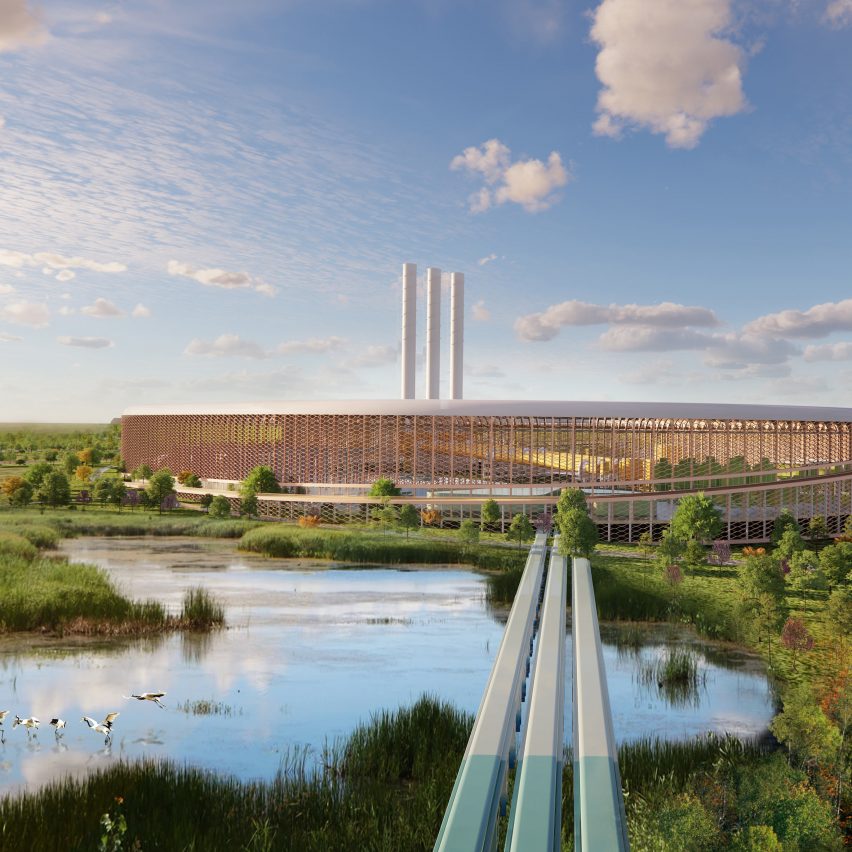 BIG has designed a factory and a number of waterborne vehicles for The Metals Company, which aims to reduce the environmental impact of battery production by extracting metals from the seafloor.

The proposed designs will facilitate an alternative to the mining of nickel, cobalt, copper and manganese.

These metals are essential for batteries such as those used in electric vehicles, but their mining can have a devastating impact on humans and the environment.

The Metals Company is developing a process to instead extract the necessary metals from fist-sized rocks that lie loose on the seafloor, which it claims will have a much lower impact than traditional mining.

“If the ongoing research and studies conclude that harvesting minerals from the seabed can be done in an environmentally and socially responsible way, we will not only be able to accelerate the green transition but give form to an entirely new industry that will create a sustainable circular metals economy for future generations.”

BIG envisions a processing plant that also acts as a materials innovation and community hub in a regenerative landscape.

The factory contains equipment for pyrometallurgical processing and hydrometallurgical refining, space for stockpiles and product storage alongside offices, visitor experiences and an innovation centre focused on the electric-vehicle supply chain.

The ultimate aim for the plant is to be circular, in that it will eventually recycle metals that have already been extracted and produce zero solid waste.

The Metals Company estimates that after three to four decades, there should be enough battery metals in the system to meet demand without further extraction, so the plant would be converted for recycling.

It works by using robotic vehicles to shoot a jet of seawater across the tops of seafloor rocks, which are called polymetallic nodules, to gently pry them from the sediment. Because these nodules are on the surface of the seafloor, there is no need for destructive drilling or blasting.

BIG’s robot design further minimises damage to the seafloor with a protective shell that reduces the dust plume kicked up during nodule collection.

After collection, the nodules travel by pipe up to a surface production vessel.

Initially, The Metals Company will use a repurposed deep-water drillship for this purpose, but the next-generation vessel designed by BIG is a 216-metre ship that will run on carbon-neutral electrofuels.

Its sunken deck will be covered with photovoltaic solar panels. The company plans to scale to a fleet of 10 production vessels.

It estimates this would enable the provision of over 40 million tonnes of battery metals by 2050, or enough to produce 280 million electric vehicles, a quarter of the global passenger car fleet.

According to Ingels, BIG applied the same level of care and detail to the industrial vehicles and facilities as it does when designing more public-facing projects.

“With The Metals Company, we are designing a human-made ecosystem channelling the flow of resources with the care and attention conventionally reserved for the front of house.”

There is no site currently set for the plant, but The Metals Company claims it has several brownfield sites under consideration and hopes to build facilities across three continents.

BIG’s previous industrial projects include Copenhill, which is dubbed the “cleanest waste-to-energy power plant in the world” and is topped by an artificial ski slope that is open all year round.

All images are courtesy of The Metals Company.