The first phase of Bjarke Ingels’ barrier system designed to protect Lower Manhattan from tidal surges and rising sea levels is getting underway.

A request for proposal (RFP) for has been issued to find a stewardship partner for the BIG U project, which was created by a team that includes the Danish architect’s firm BIG and Dutch studio One Architecture & Urbanism. 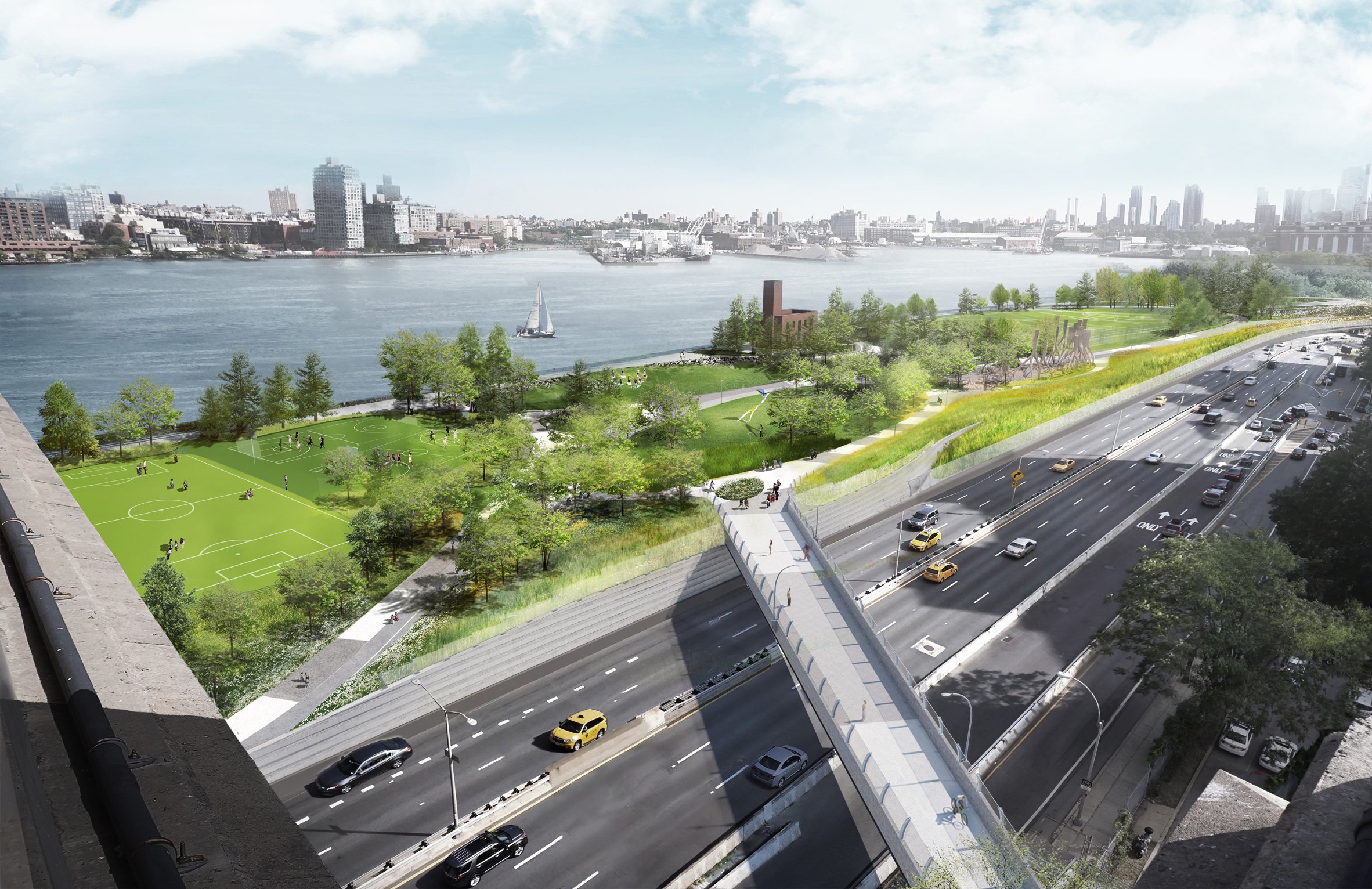 The scheme was one of several winners in a competition initiated by Rebuild by Design in the wake of Hurricane Sandy, which damaged large swaths of the US eastern seaboard in 2012.

The BIG U defences are designed to prevent the extensive flooding experienced by Lower Manhattan during the storm, and combat sea-level rise expected as a result of climate change. 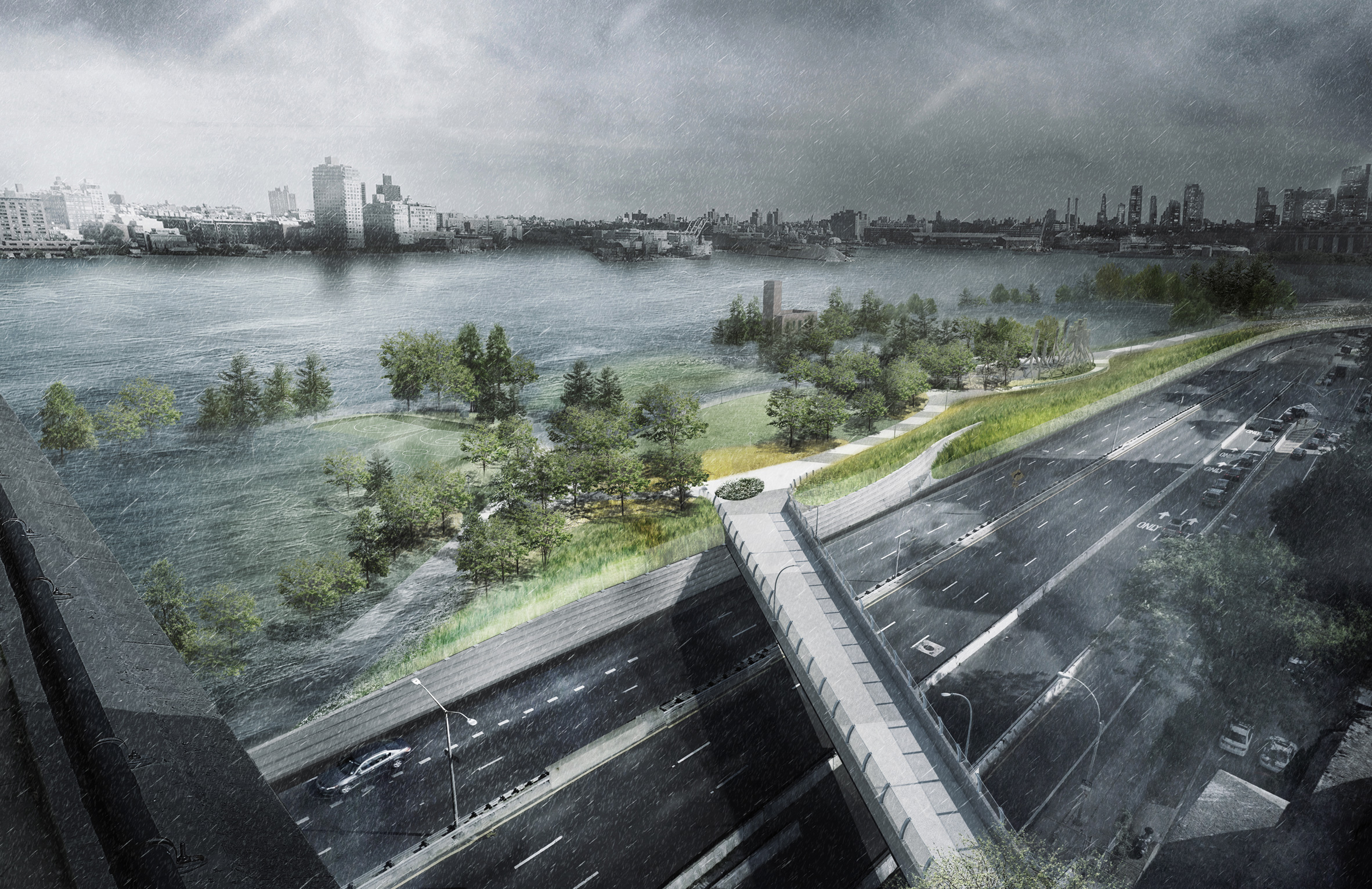 Plans involve creating a 10-mile barrier that would stretch from West 57th Street, wrap around the southern tip of Manhattan, and run back up the other side to East 42nd Street.

Phase one, known as the East Side Coastal Resiliency (ESCR) project, will focus on a section of the East River Park along the Lower East Side – using $335 million (£256 million) in combined public and private funds. 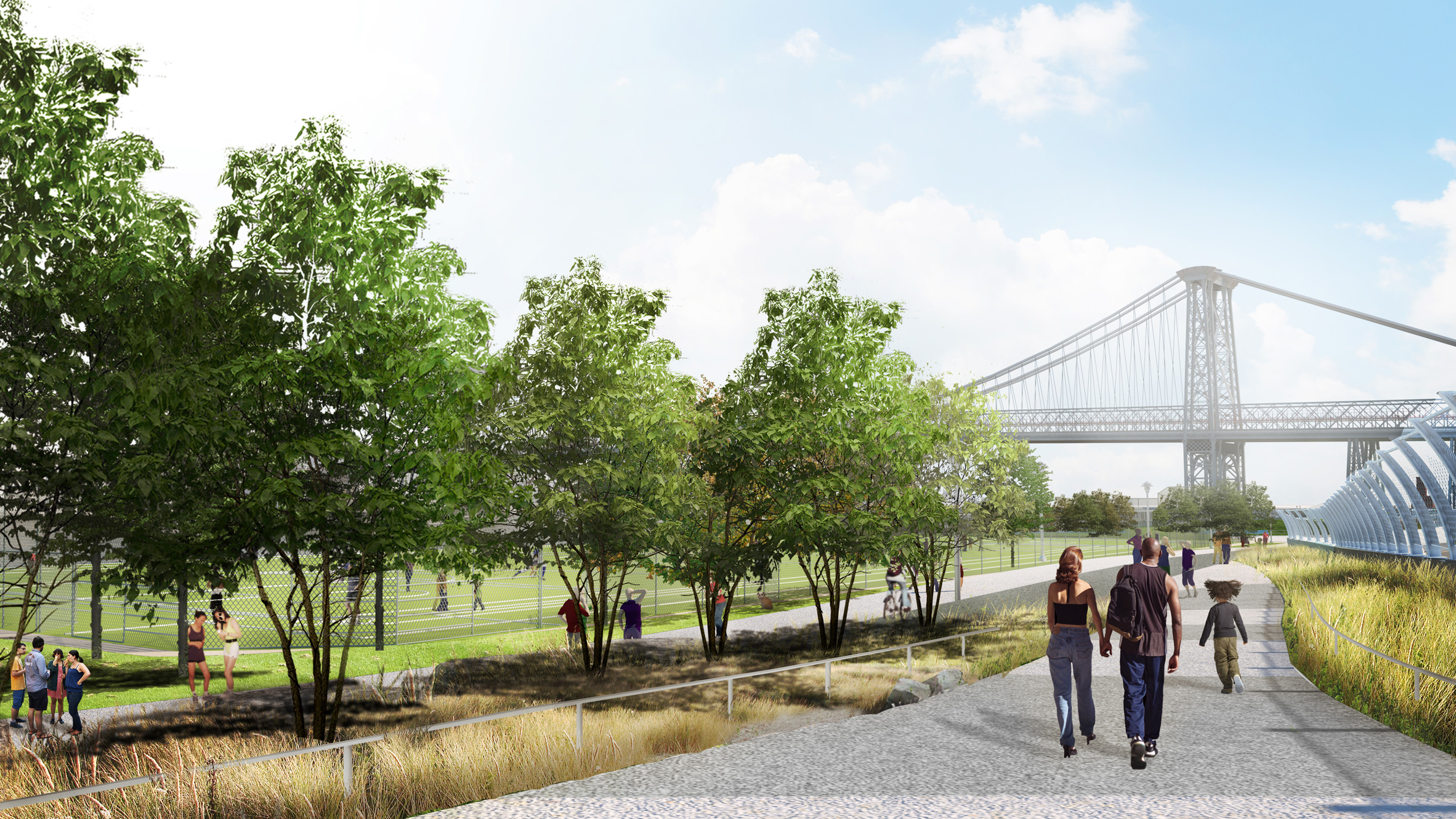 A “bridging berm” barrier – planted with a selection of salt-tolerant flora, and including public spaces and viewpoints – is proposed to protect the low-lying ground. Ingels explains more about the project in a movie filmed by Dezeen in 2014.

The RPF issued by Rebuild By Design and Good Old Lower East Side (GOLES) calls for a partner “to explore and ultimately recommend potential park stewardship models with funding mechanisms that could enhance the long-term operating budget while addressing issues of equity”. 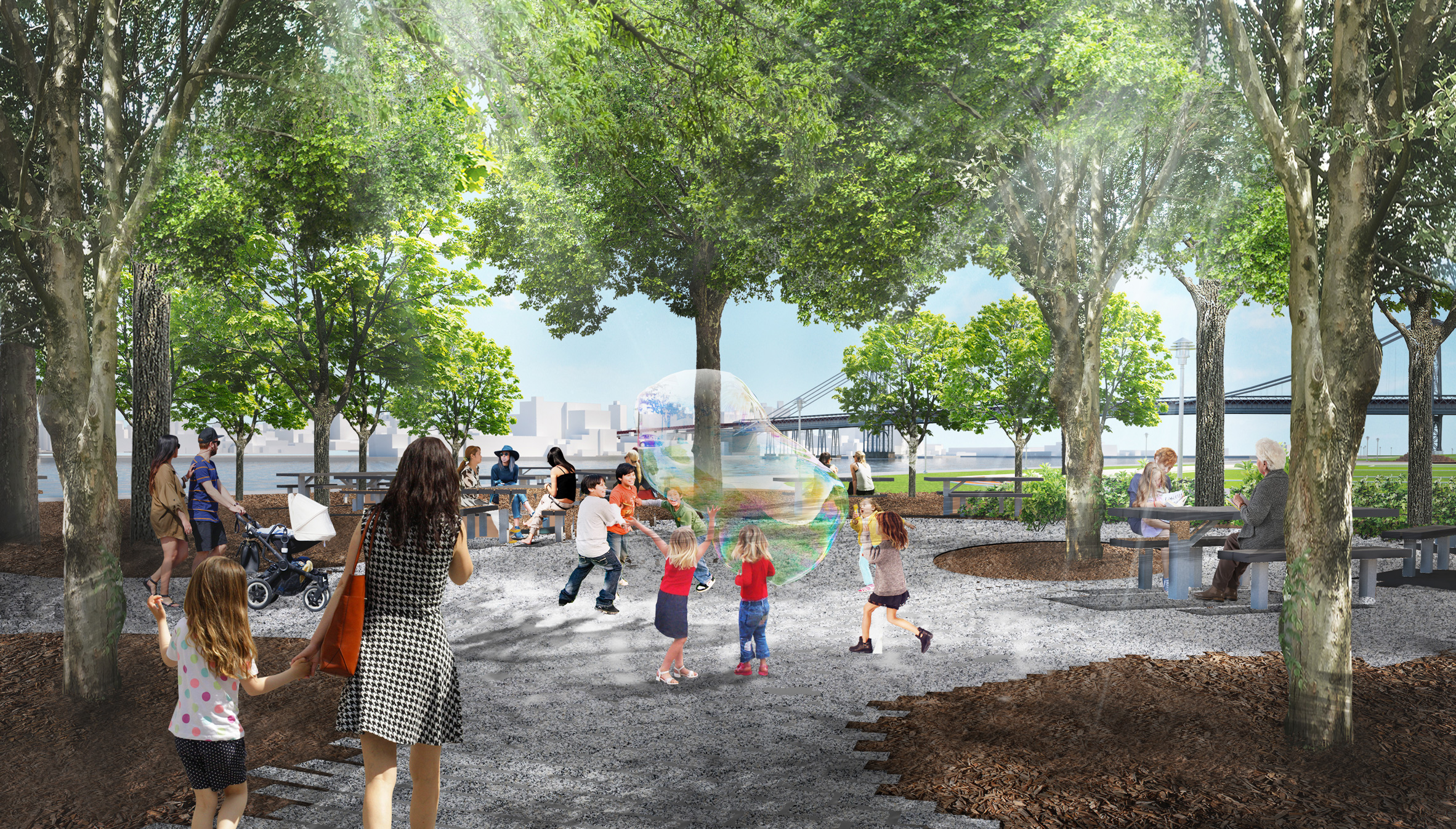 The submission deadline is 9 August 2018, and the chosen organisation will be informed by the end of the same month. The research project will then take place over the following eight weeks. 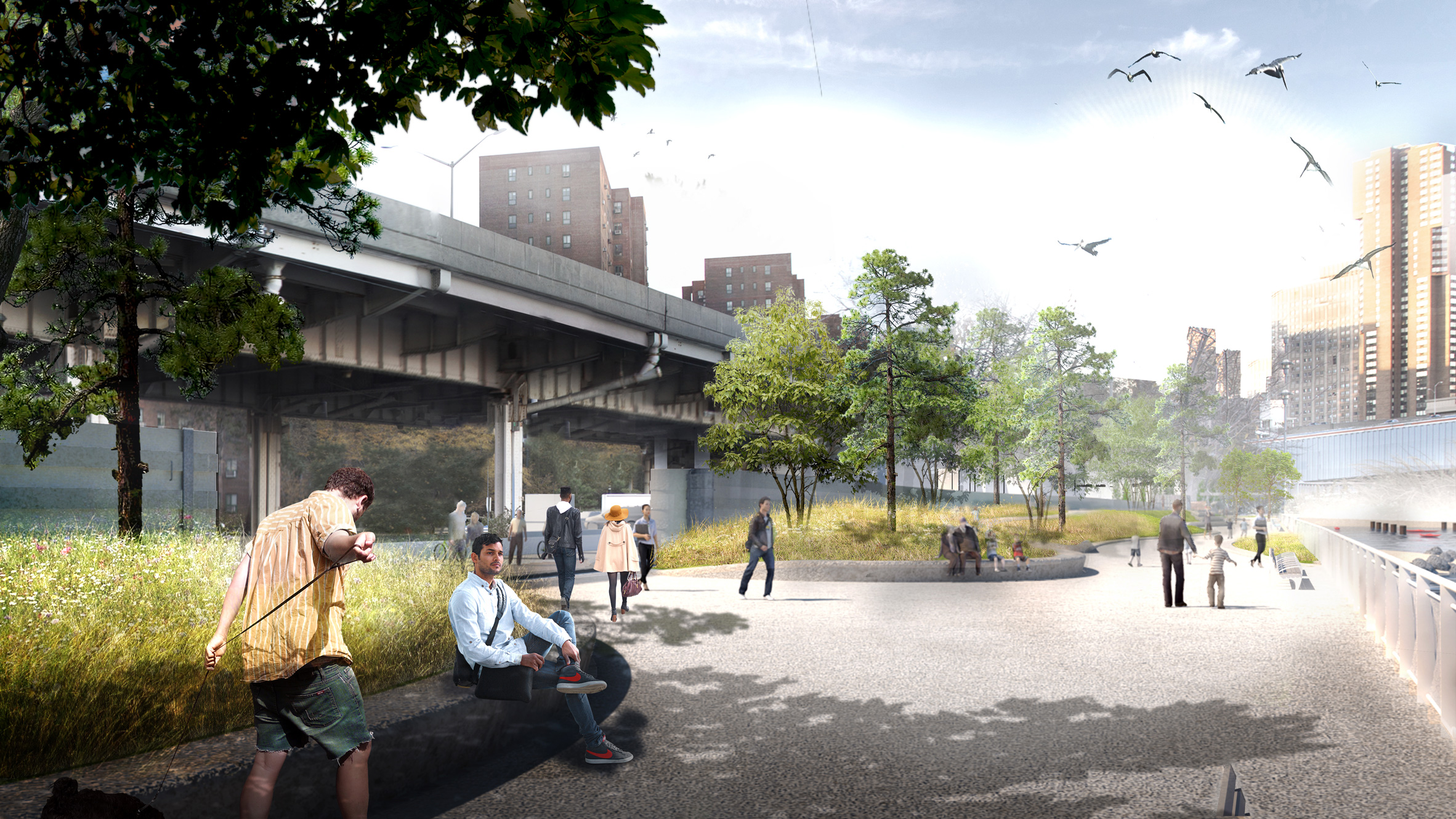 BIG and One Architecture & Urbanism have also collaborated for a more recent Resilient by Design competition, which aims to tackle the effects of climate change on the Bay Area.

The studios have proposed a scheme to prevent a creek in San Francisco from flooding.

BIG has several other projects on the go in New York City, where it has an office. The firm’s twisting towers beside the High Line park are well underway, and initial construction has begun on The Spiral skyscraper that forms part of the huge Hudson Yards development on Manhattan’s West Side.

However, its Two World Trade Center still hasn’t made it above ground level as tenants for the offices are yet to be secured.