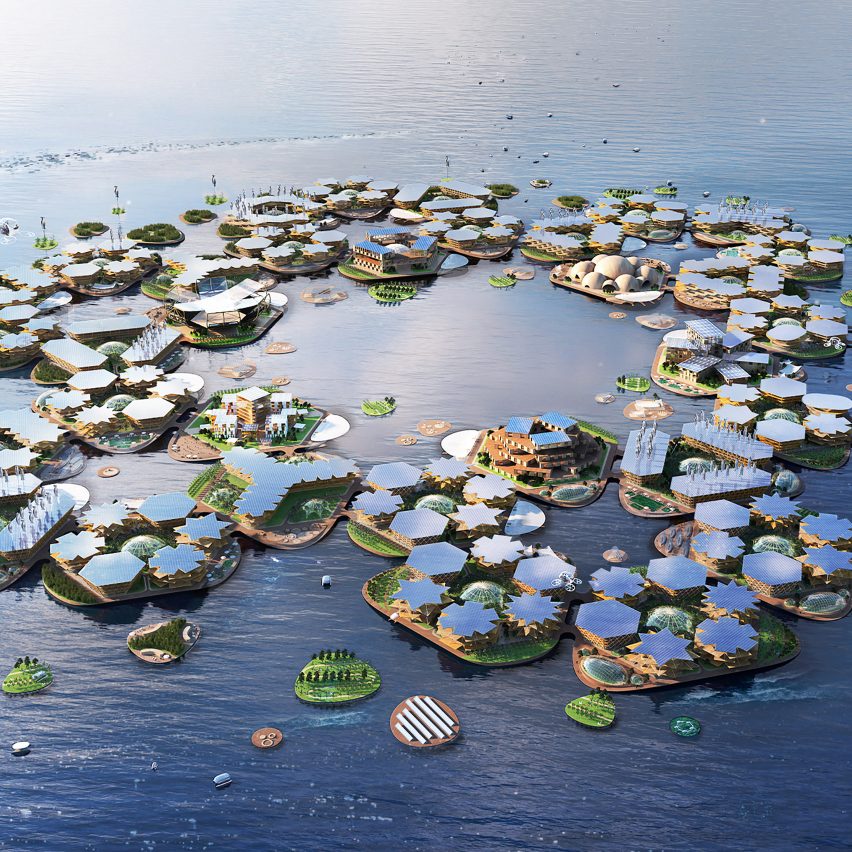 Architecture firm BIG has designed a concept for a floating city of 10,000 people that could help populations threatened by extreme weather events and rising sea levels.

Called Oceanix City, the concept consists of buoyant islands clustered together in groups of six to form villages. These clusters would then be repeated in multiples of six to form a 12-hectare village for 1,650 residents, and then again to form an archipelago home to 10,000 citizens.

“We’ve based it on this modular idea of a hexagonal island,” Ingels said in the presentation at the roundtable. “It has the omni-direction of a circle but it has the modularity and rationality of something manmade.”

BIG developed the concept with MIT‘s Center for Ocean Engineering and Oceanix –  a non-profit set up to innovate ways to build on water.

The scheme was unveiled at the First UN High-level Roundtable on Sustainable Floating Cities, which Oceanix co-convened with MIT, the Explorers Club and UN-Habitat, a UN offshoot mandated to work with city development.

Oceanix City is intended to provide a habitable, off-shore environment in the event of rising sea levels, which are expected to affect 90 per cent of the world’s coastal cities by 2050.

Each of the modules would be built on land and then towed to sea, where they would be anchored in place. The miniature islands are also designed to survive a category-five hurricane.

Arrangements would be flexible so that the cities could be moved if water levels became too low.

BIG intends the buildings atop to be constructed from locally sourced “replenishable” materials such wood and fast-growing bamboo, which also offer ” warmth and softness to touch”.

A number of renewable energy resources, such as wind and water turbines and solar panels are also incorporated. Food production and farming would be integrated and follow a zero-waste policy.

“Every island has 3,000 square metres of outdoor agriculture that will also be designed so that it can be enjoyed as free space,” said Ingels.

Structures populating the modules will be low-level – predicted to rise four to seven stories – in order to keep the centre of gravity.  Renderings show that the buildings will taper out towards the top to provide shading and also extra roof space for solar panels.

Each mini-village will include a community framework for living, including water baths, markets, spiritual and cultural hubs, but BIG intends the Oceanix City to be adaptable to “any culture, any architecture”.

Another major benefit of the floating city, according to Oceanix co-founder Marc Collins Chen, is that it is an example of an affordable development, which could offer a solution to displaced societies.

“It is our goal to make sure sustainable floating cities are affordable and available to all coastal areas in need,” said Chen. “They should not become a privilege of the rich.”

Oceanix City is intended to be developed in sub-tropical and tropical areas that are most at risk of flooding first, but could soon offer a more attractive living environment.

“The idea that we are presenting here is not that we will all be living at sea in the future,” said Ingels. “It won’t be waterworld.”

“This is simply another form of human habitat that can be a seed, that essentially can grow with its success as it turns out to be socially and environmentally desirable to chose this lifestyle,” he continued.

BIG’s unveiling of Oceanix City at the UN marks a major step forward for developing cities adapted to climate change and the resulting threat of rising sea levels and extreme weather events.

“We must build cities for people, not cars,” she said. “And we must build cities knowing that they will be on the frontlines of climate‑related risks — from rising sea levels to storms. Floating cities can be part of our new arsenal of tools.”

Chen revealed that the team will move forward with producing a prototype of the scheme, with ambitions to launch it on New York’s East River.

Oceanix City forms part of a surge of interest in floating cities, developed in response to rising sea levels. Examples of projects include colonies of floating houses along Amsterdam’s river IJ and an amphibious house in the UK.

A number of US cities are exploring other ways to bolster their vulnerable shorelines. Boston and Miami are taking steps to address flooding, while San Francisco and the Bay Area unveiled a design competition asking for ways to protect coastal areas from rising sea levels, as well as earthquakes.