A stark white palette is used both outside and in this Brazilian home, designed by local firm Bloco Arquitetos as a series of angular volumes on a steep site.

Cora House is situated on a sloping property in Brasília, and the incline of the land played a pivotal role in the massing of the building. 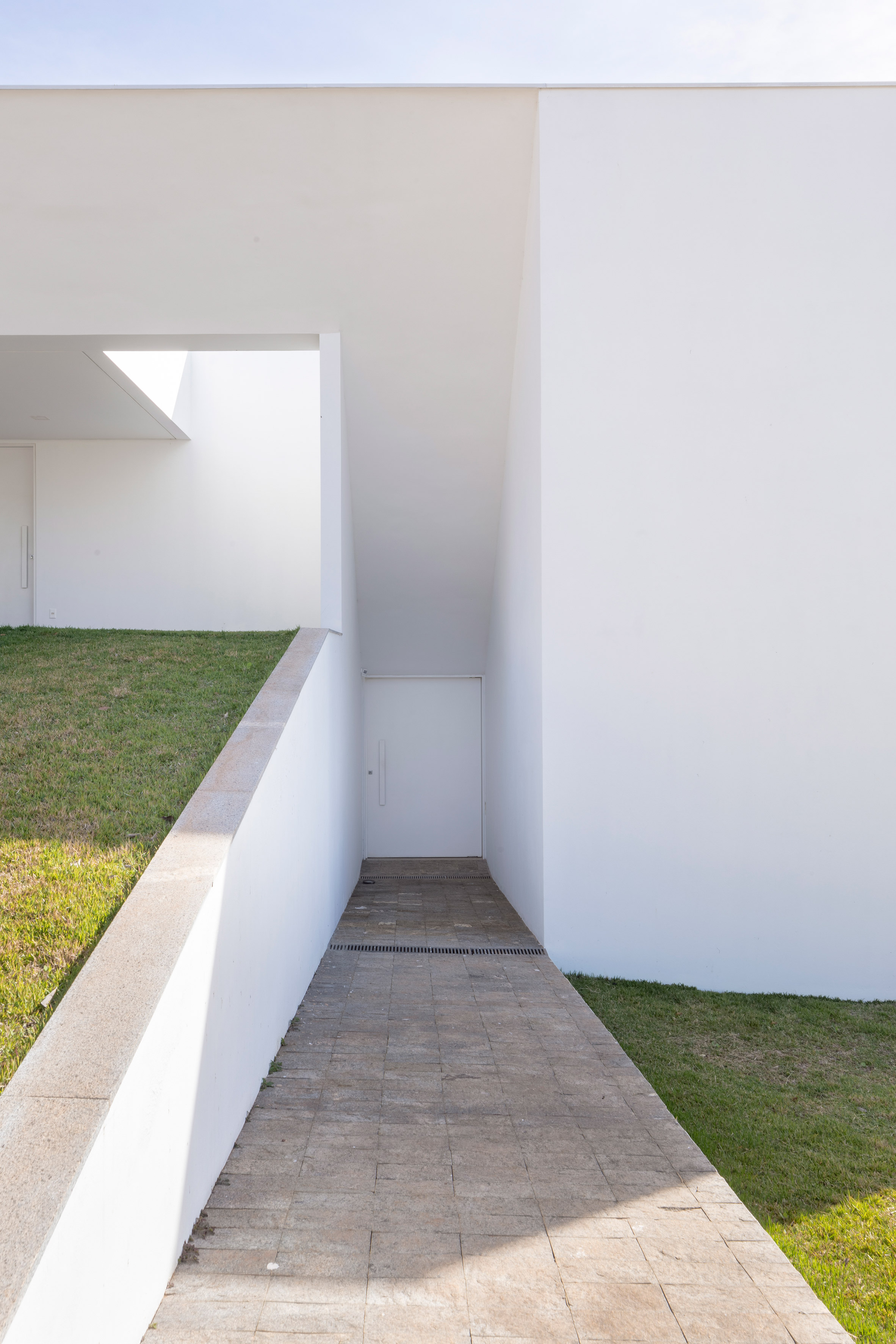 Its two levels are both accessible from the street. A narrow path leads down to the living area, while a driveway ramps up to a covered carport that has direct access to the upstairs bedrooms.

“The public space created between the recessed volumes function as the interface between the house and the street,” said Bloco Arquitetos. 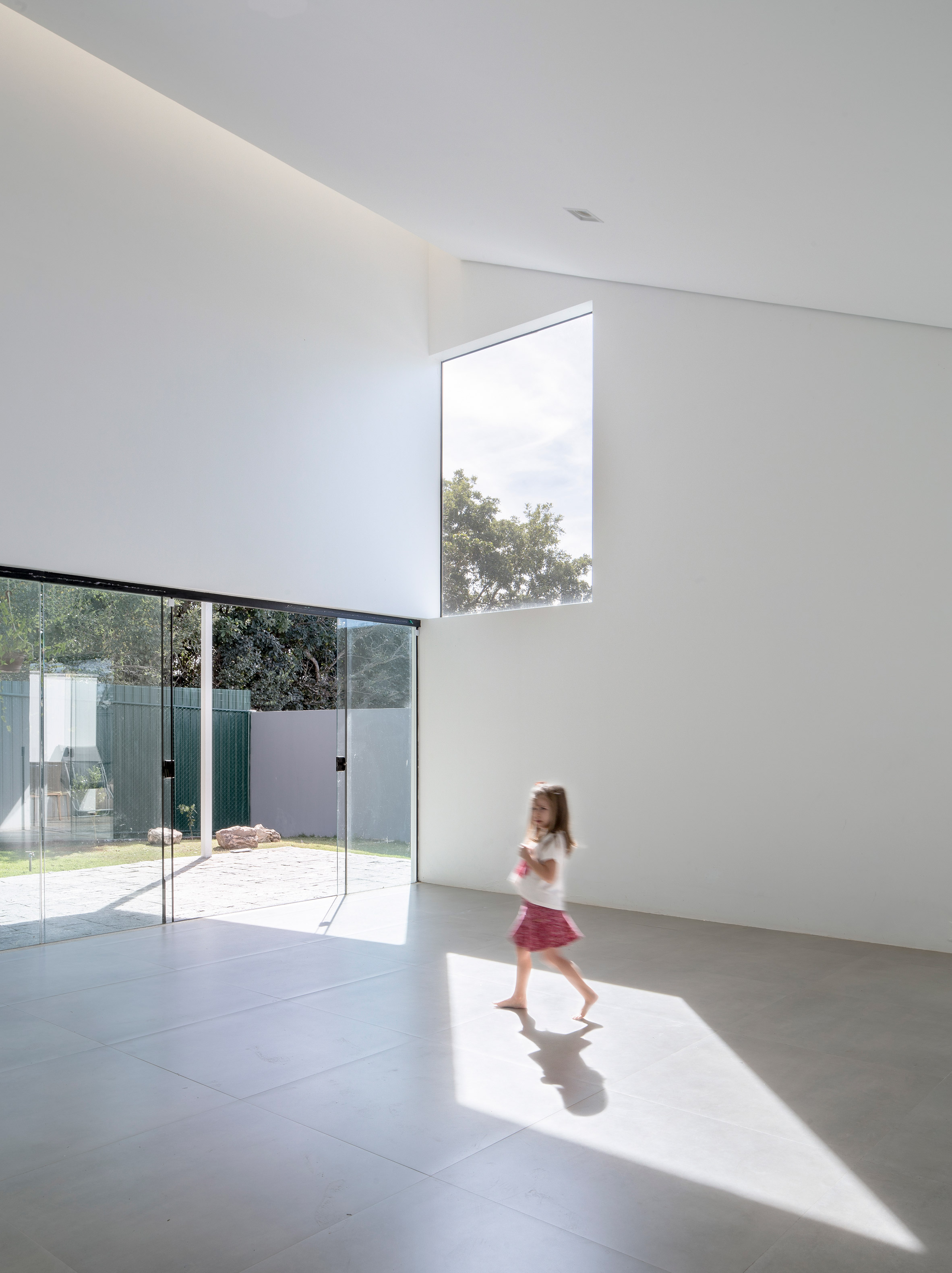 The layout allows the house to occupy the maximum area allowed for construction on the site, while maintaining the gradient of the land.

“The aim was to create an architectural promenade that could exacerbate the perception of certain aspects of the natural ground: the topography, the natural light and specific views to the outside,” said the studio. 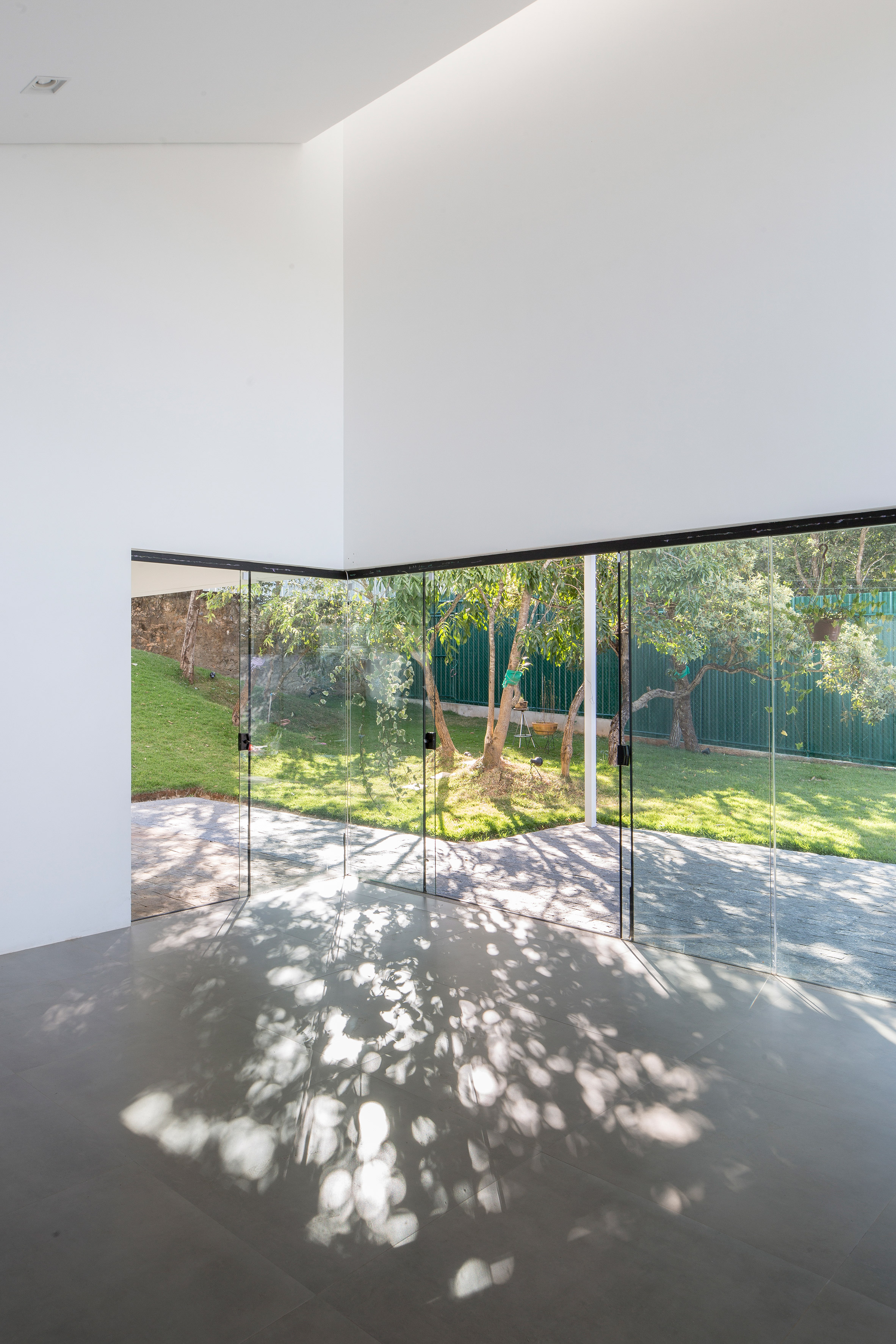 Although completely white all over, the building’s front and rear facades look vastly different.

From the road, it appears as a series of blocks stacked irregularly upon one another, with glimpses of the butterfly roof that tops the lower portion. No windows are visible on this side of the house, affording its occupants some privacy.

At the back, the elevation is much more simple, and includes large sections of floor-to-ceiling glazing, which slides open to the garden and balconies.

“The abstract character of the front facade is opposed to the back facade,” Bloco Arquitetos said. “The different inclines of the roof were manipulated to adapt it to the resulting topography, in order to ‘compress’ the internal ceiling heights towards the centre… and ‘expanding’ it towards the backyard.” 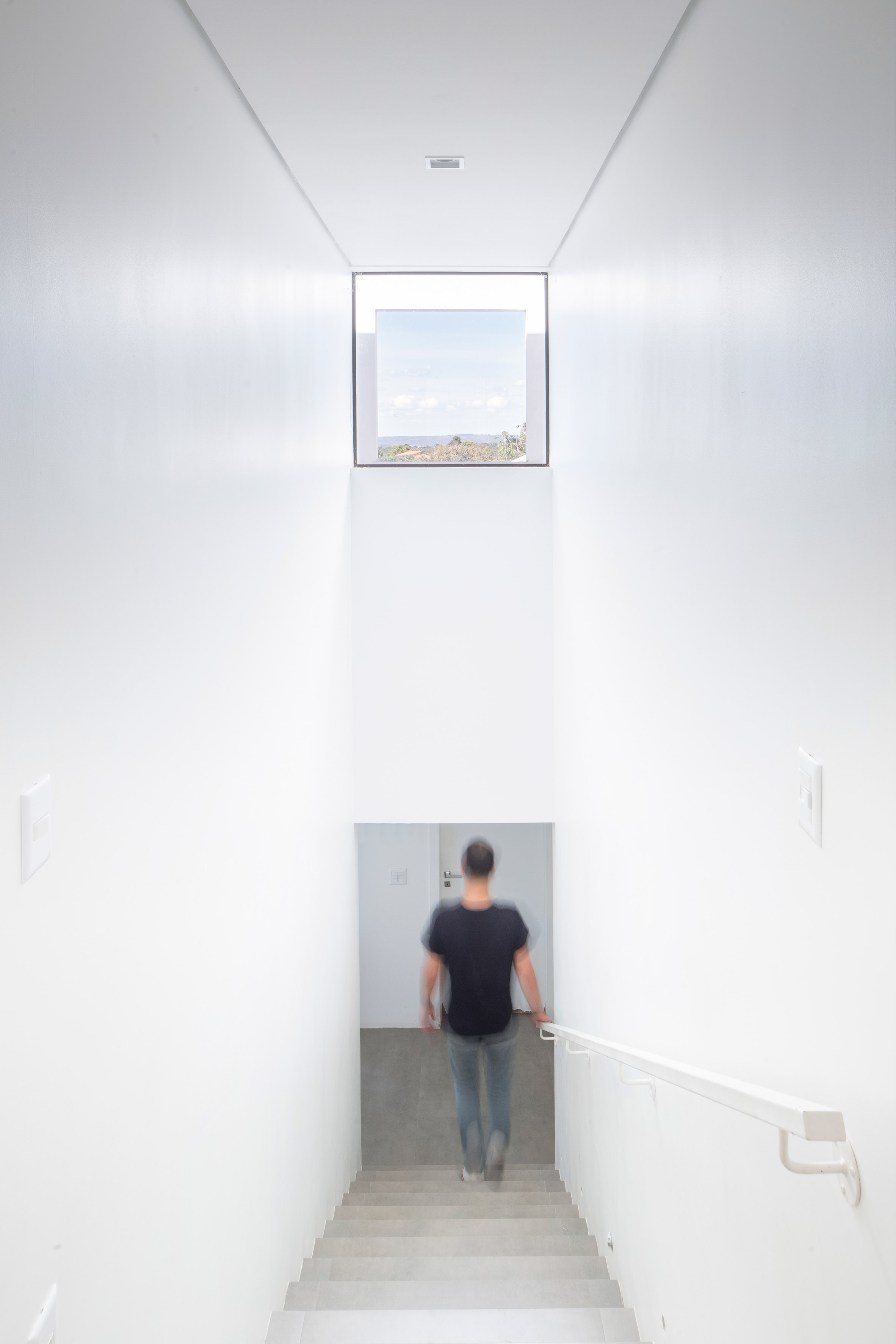 The main living area is positioned at the back of the house, in a double-height space facing a covered patio and the garden beyond.

Towards the front on the same level is a galley-style kitchen, tucked behind which are a service room, a small bedroom and a bathroom – presumably for a live-in maid. 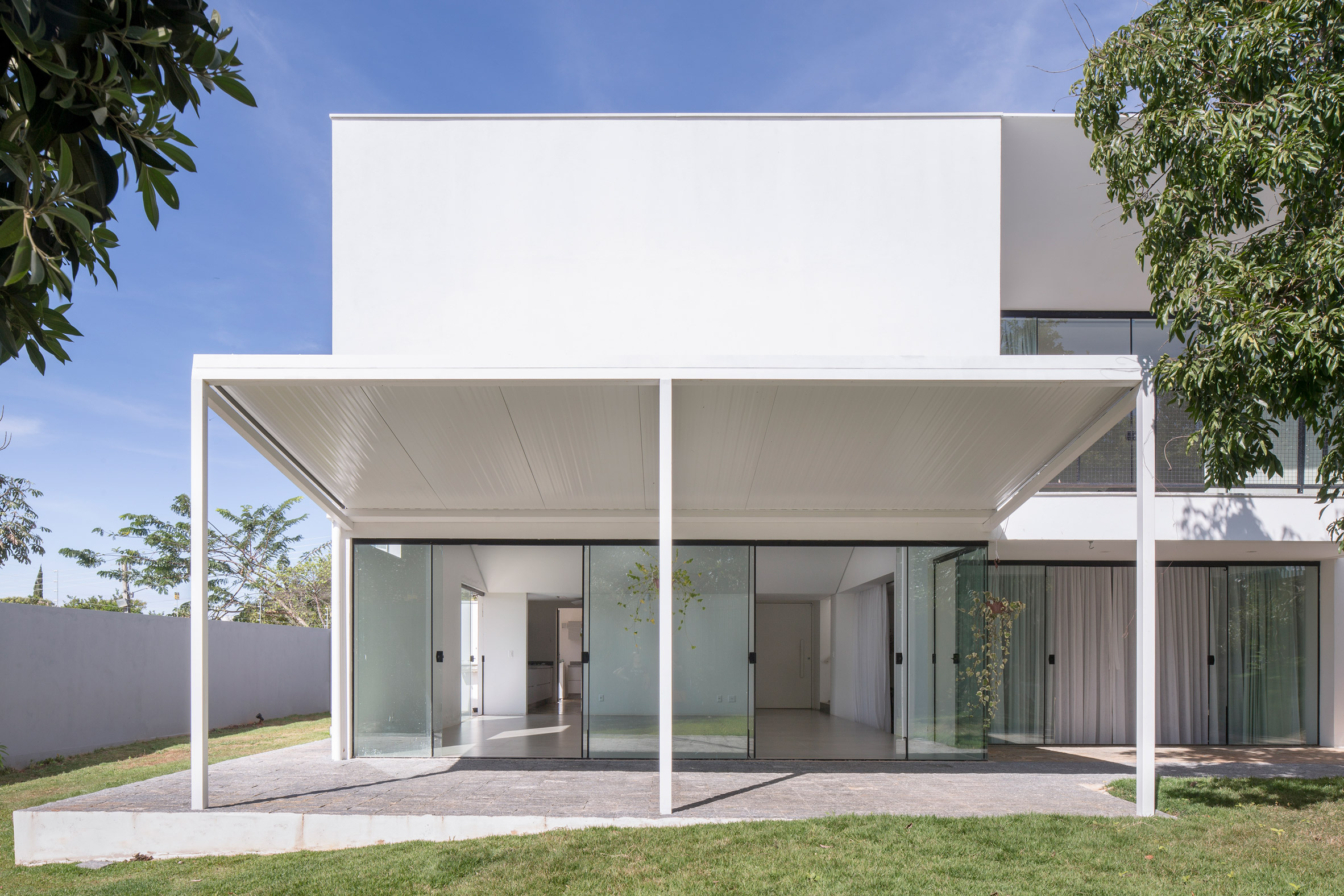 A staircase following the slope of the hill connects to the upper level, which contains three bedrooms. Two of them face out to the back garden, and have access to balconies overlooking the trees, while the third branches towards the street.

Skylights help to illuminate the bedrooms and adjoining bathrooms, as well as improve ventilation. 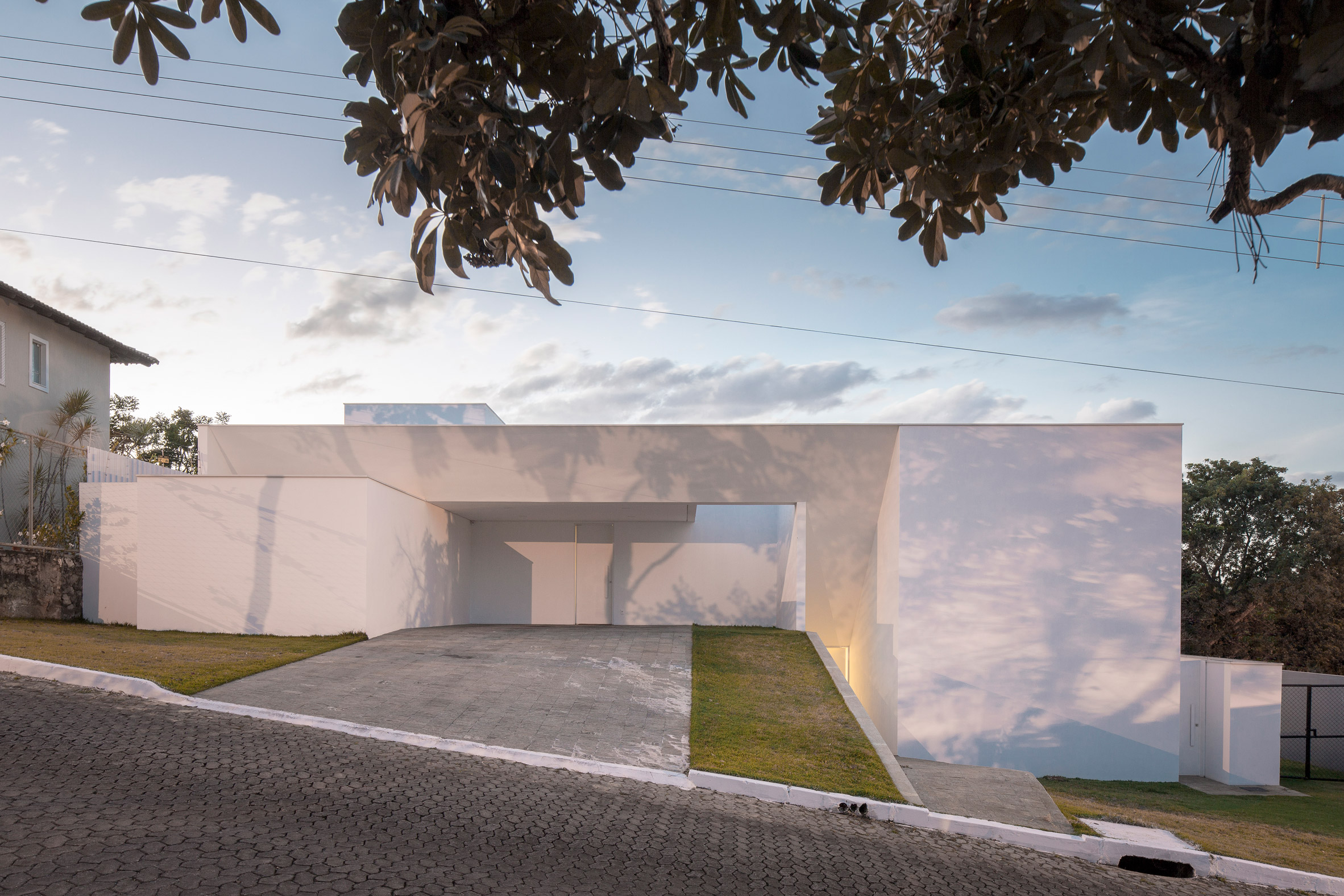 Bloco Arquitetos has recently designed two other houses in Brasília, including a brick-and-concrete residence exposed to the outdoors and a narrow house with a slanted roof for a compact plot.

Photography is by Joana França.