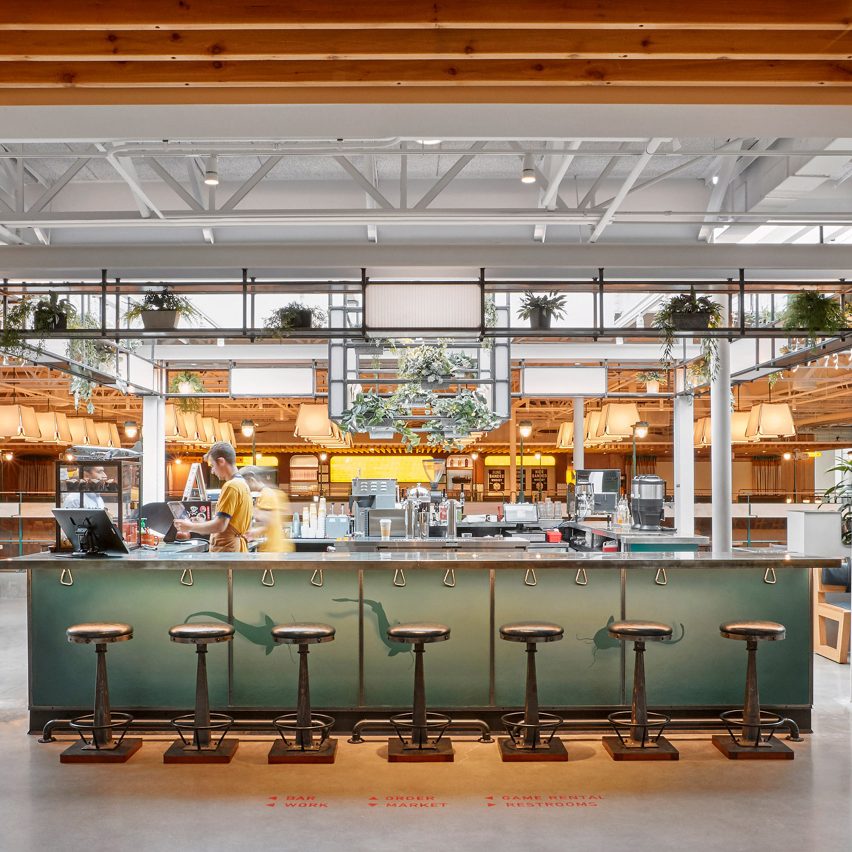 American studio Brand Bureau employed a “slightly cheeky camp and wilderness feel” for the conversion of an industrial building in Arkansas into this venue for co-working, dining and playing shuffleboard. 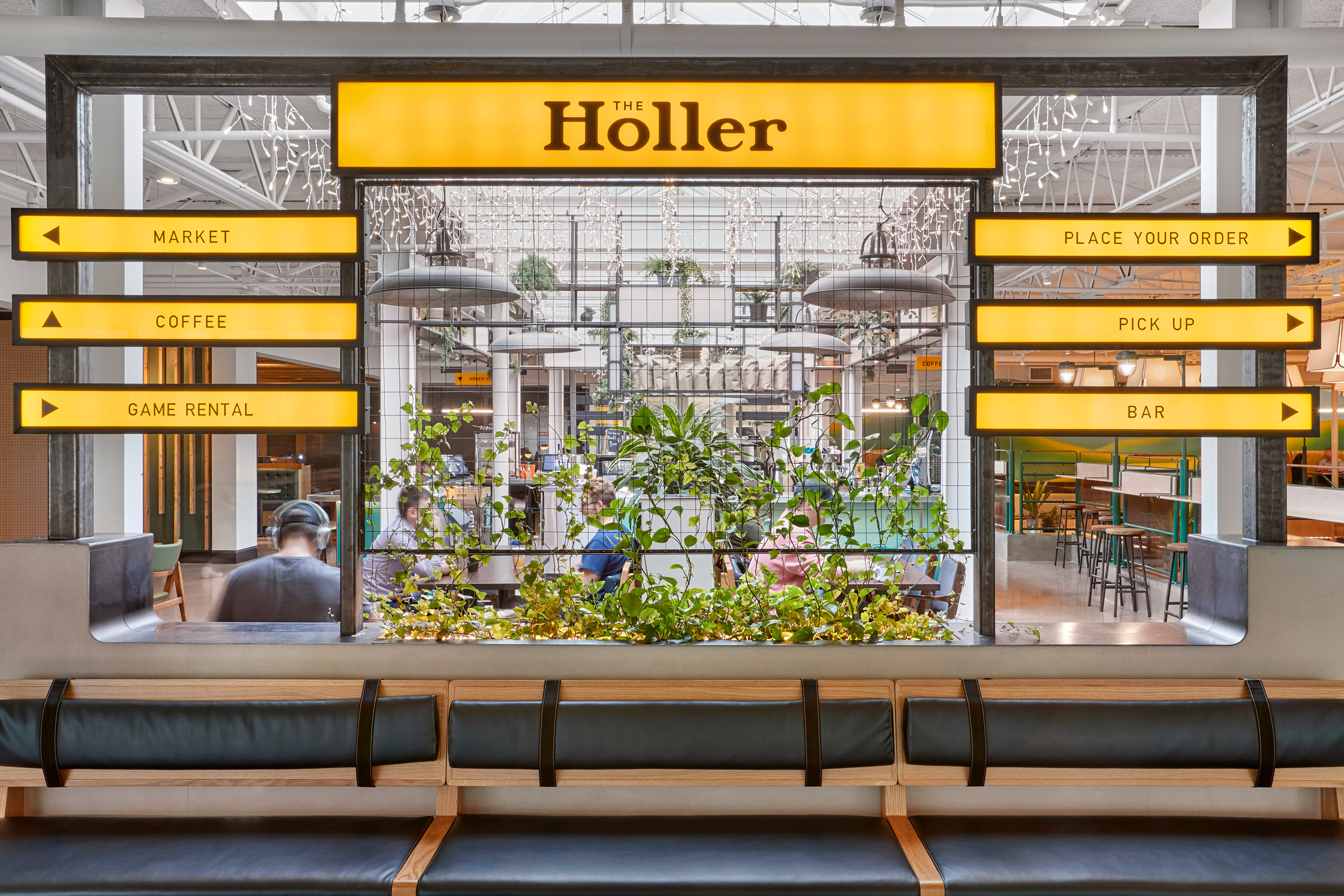 Called The Holler, the multipurpose venue is located within a former food processing plant in northern Arkansas town Bentonville. It forms the centrepiece of new culinary hub 8th Street Market. 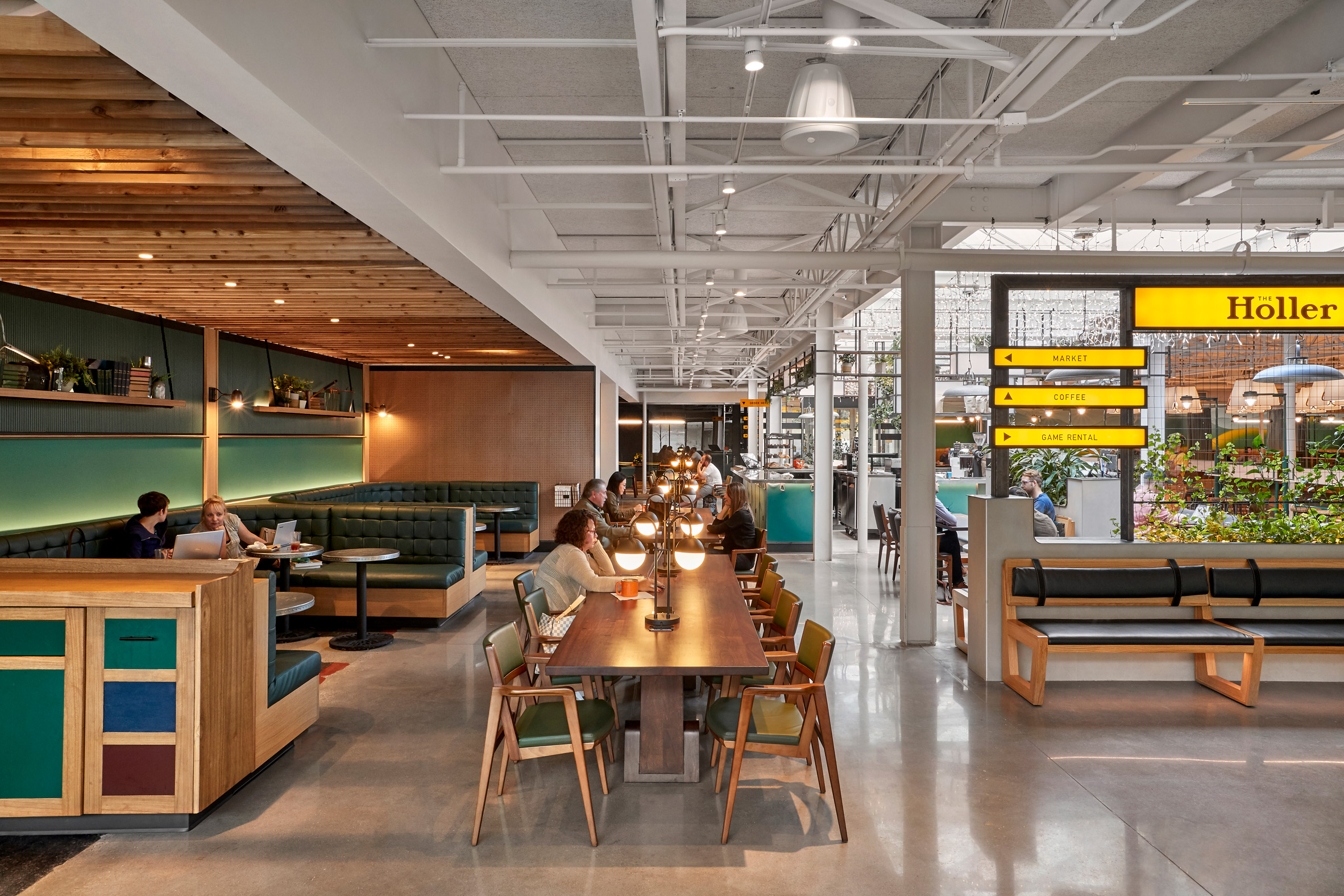 Open from early morning to late night, The Holler is meant to serve as an “all-in-one local hangout” that can be used throughout the day for co-working, dining and socialising.

The interior design and branding were conceived by New York-based studio Brand Bureau, which forms part of the hospitality design firm AvroKO. 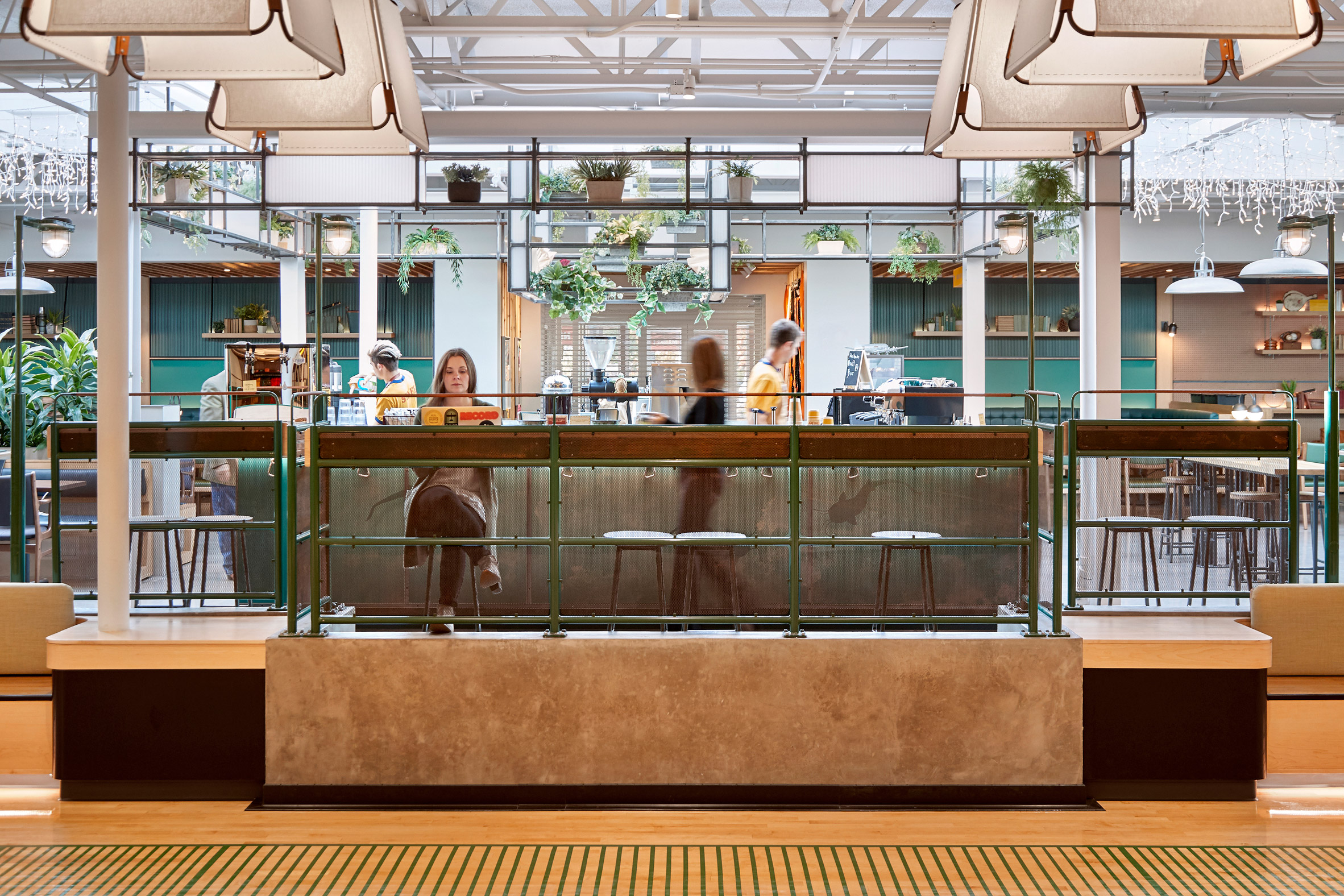 Square in plan, the 10,000-square-foot (929-square-metre) venue contains a bar, a coffee shop, a full kitchen and shuffleboard courts. Ceilings and columns are left exposed, paying heed to the site’s industrial history.

To add warmth, the team used design elements that allude to the region’s flora, fauna and topography – particularly the Ozark Mountains. 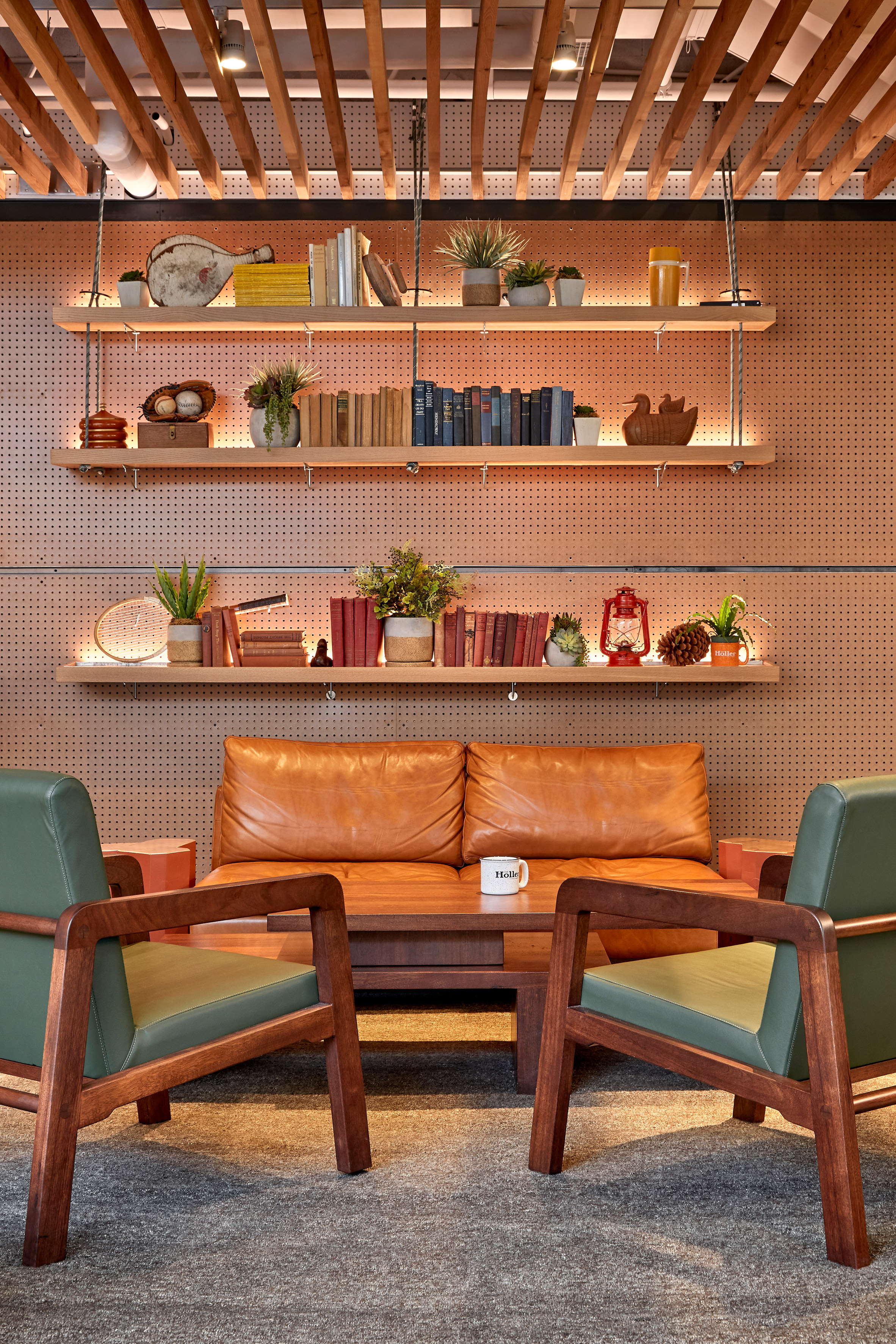 “We developed the brand and the interior design using a slightly cheeky camp and wilderness feel,” said Brand Bureau in a project description.

“The most striking manifestation is the vast mural of the Ozarks, which stretches across the entire back wall of the space.” 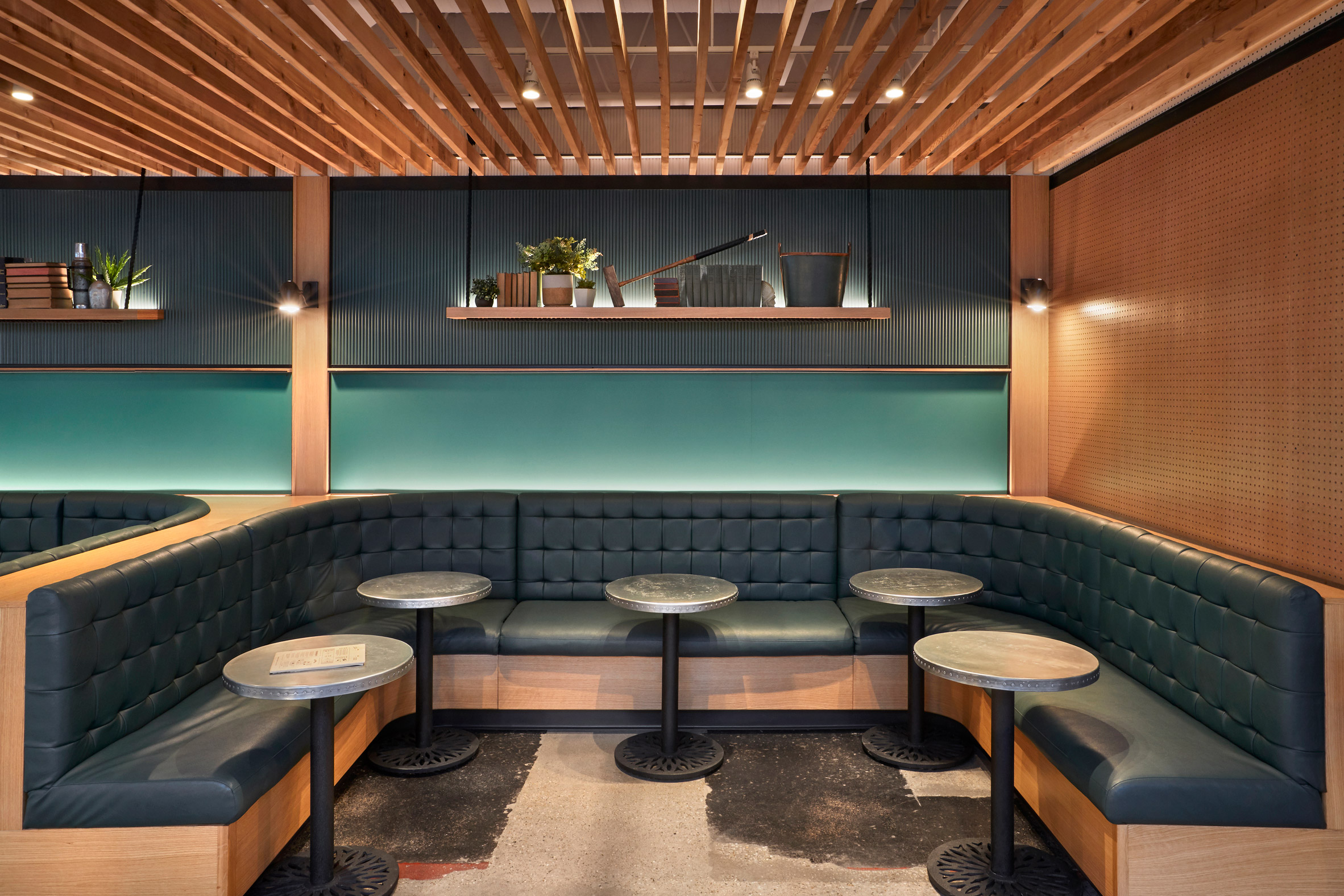 Natural wood and potted plants, along with earthy colours like blue and green, help underscore the connection to the great outdoors. In the centre of the venue, a pointed skylight stretches overhead, bathing visitors in natural light. 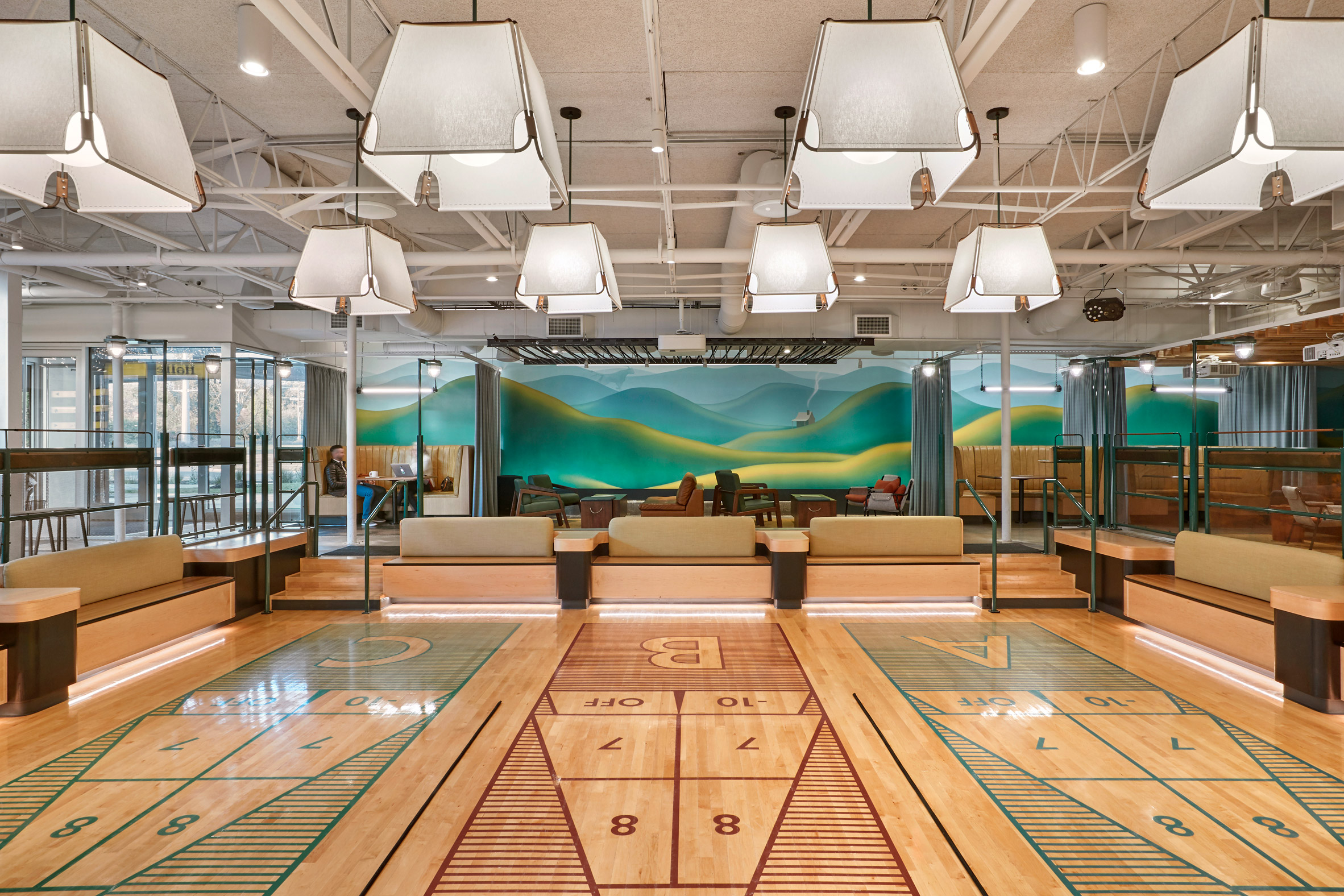 A focal point of The Holler is the shuffleboard area, which is sunken into the ground. Highly polished courts are lined with wooden booths with tan cushions.

Hanging overhead are white, boxy light fixtures produced by GoodShop Manufacturies, an industrial design and fabrication company that is also owned by AvroKO. 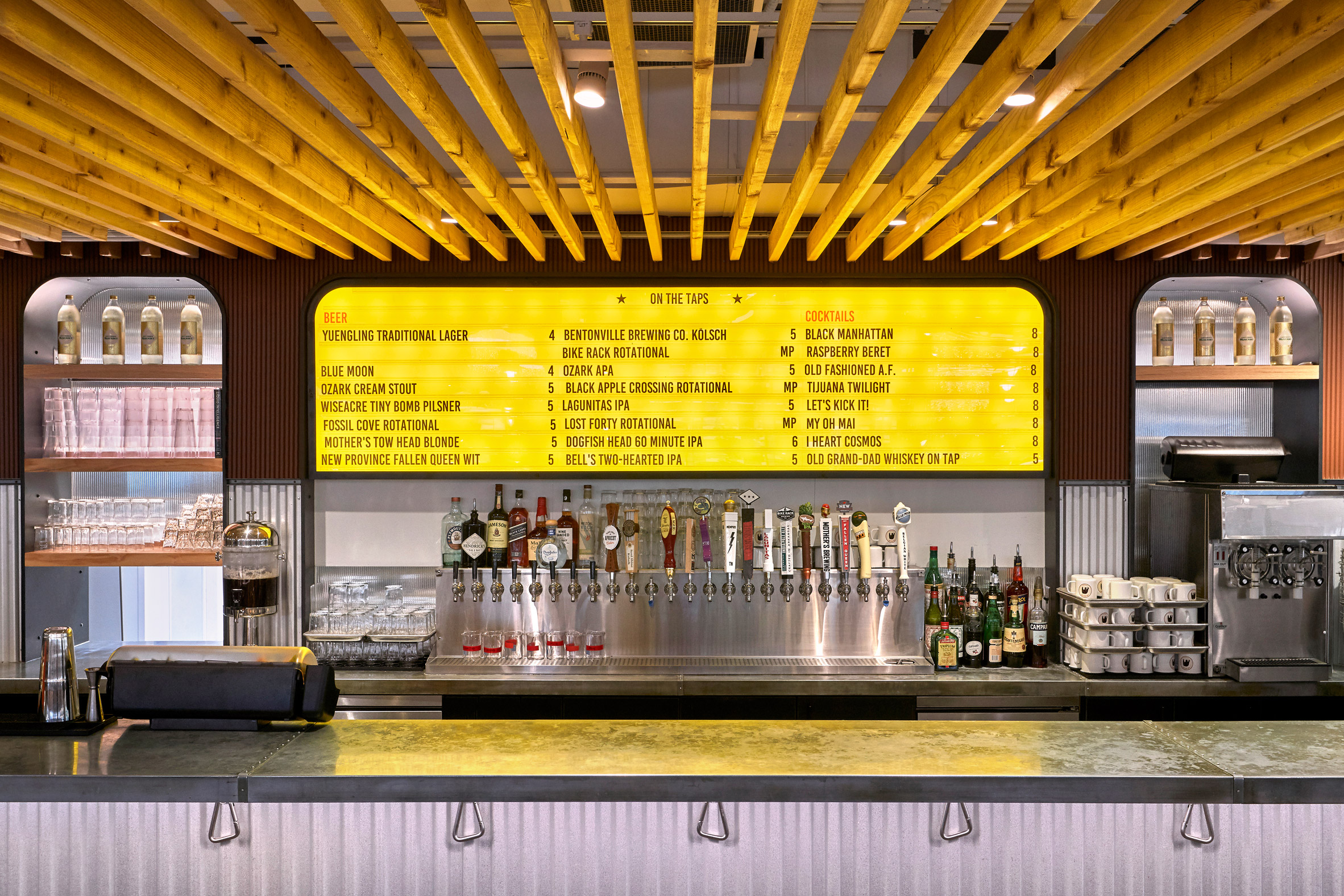 A range of seating options are offered throughout the venue, including long, communal tables and comfy sofas. One nook features U-shaped leather booths with metal cafe tables. Overhead, a slatted wooden ceiling lends a cosy feel.

“Nearly all of the lighting and furniture was custom designed and developed in our studios,” the team said. 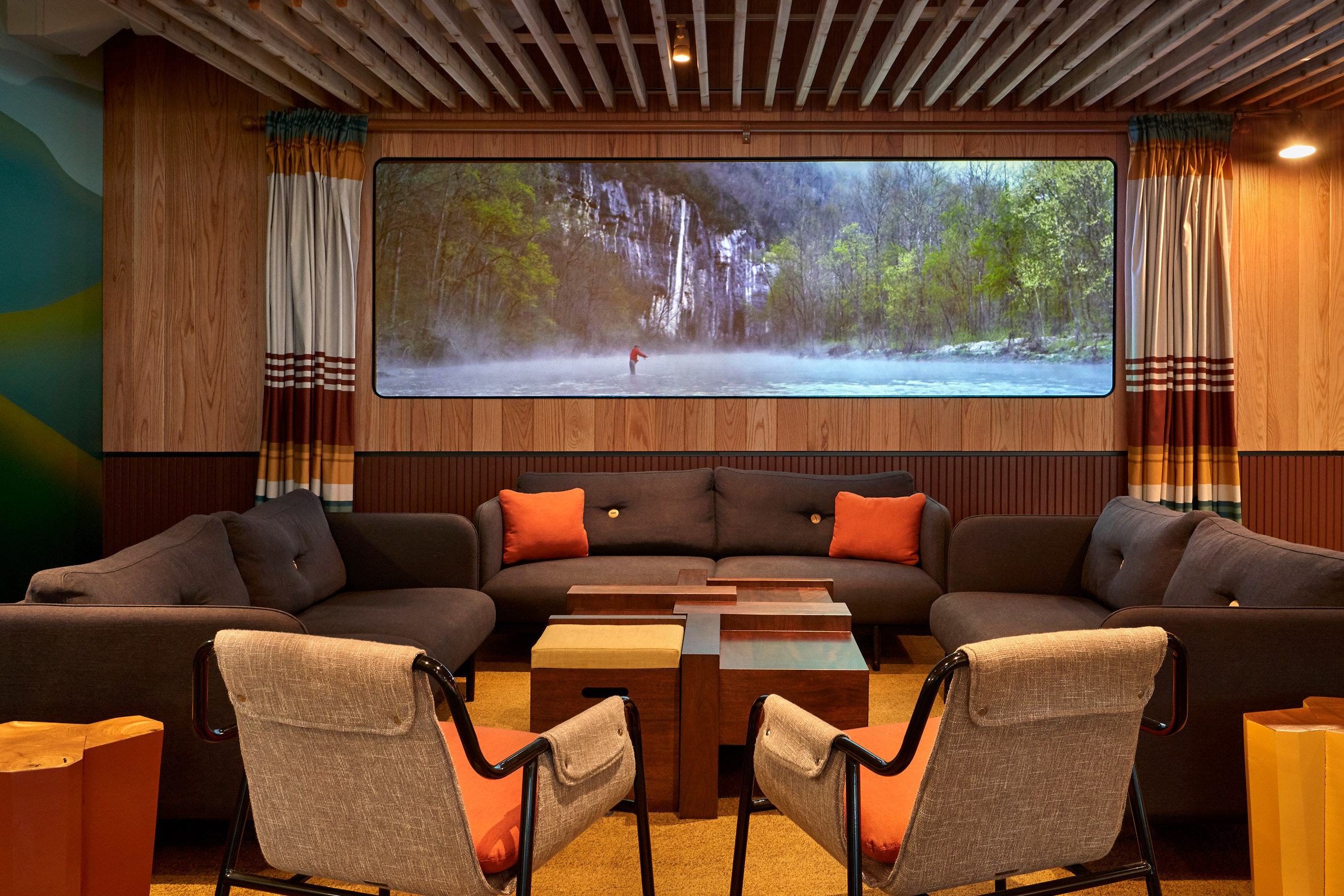 In addition to the interior space, Brand Bureau designed merchandise such as coasters, sew-on patches and enamel mugs.

The team emphasised that there is no one graphic for The Holler but “rather an array of fonts and designs that reflect the space’s eclectic mix of offerings and functions, allowing the brand to evolve with time”.

Bentonville, which is known for being the birthplace of retail giant Walmart, is near the University of Arkansas in Fayetteville. Other projects in the area include a repurposed warehouse that serves as an educational facility for the School of Art – a project by El Dorado and Modus Studio.

Photography is by Garrett Rowland, unless stated otherwise.