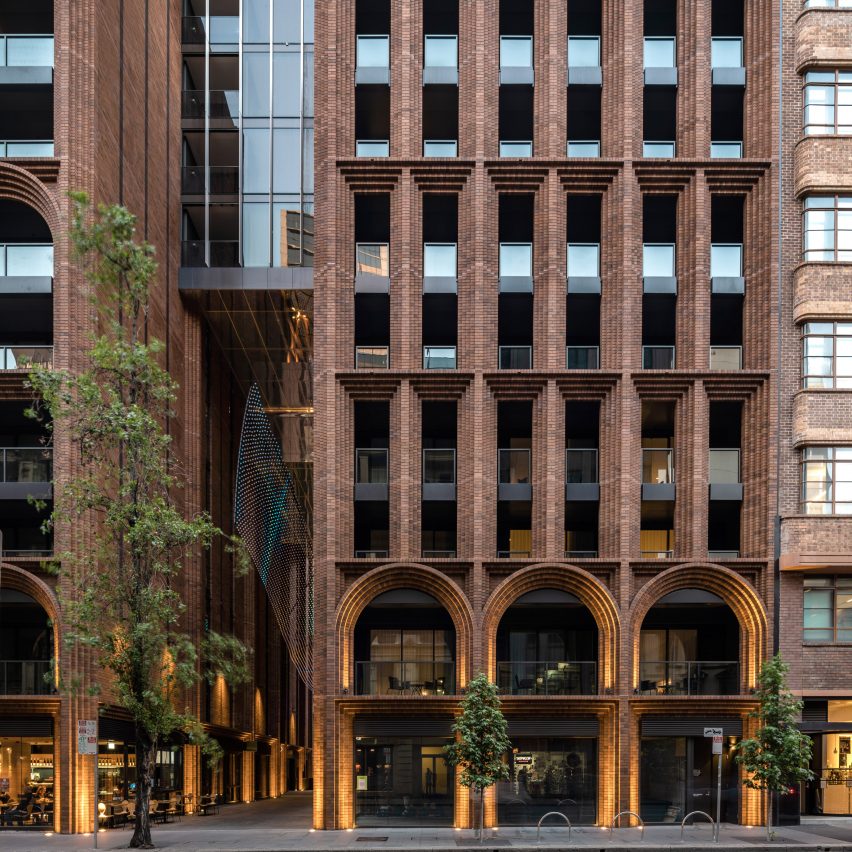 Koichi Takada Architects has designed a podium fronted with brick archways as the base of the glass and steel Arc tower in Sydney, Australia.

The mixed-use scheme for developer Crown Group is in a historic area of Sydney’s central business district.

“A duality is introduced to the facade and represented by the varied aesthetics of the podium and tower,” said the architecture studio about the tower, which is located near two historic brick buildings – the Red Cross Building and the Andrew Bros Warehouse.

“[This was] inspired by the masonry component in the significant heritage buildings next door, and their characteristic arches,” continued the studio.

The building is split in two by the publicly accessible Skittle Lane, a pathway from the 1980s that has been incorporated into the project. 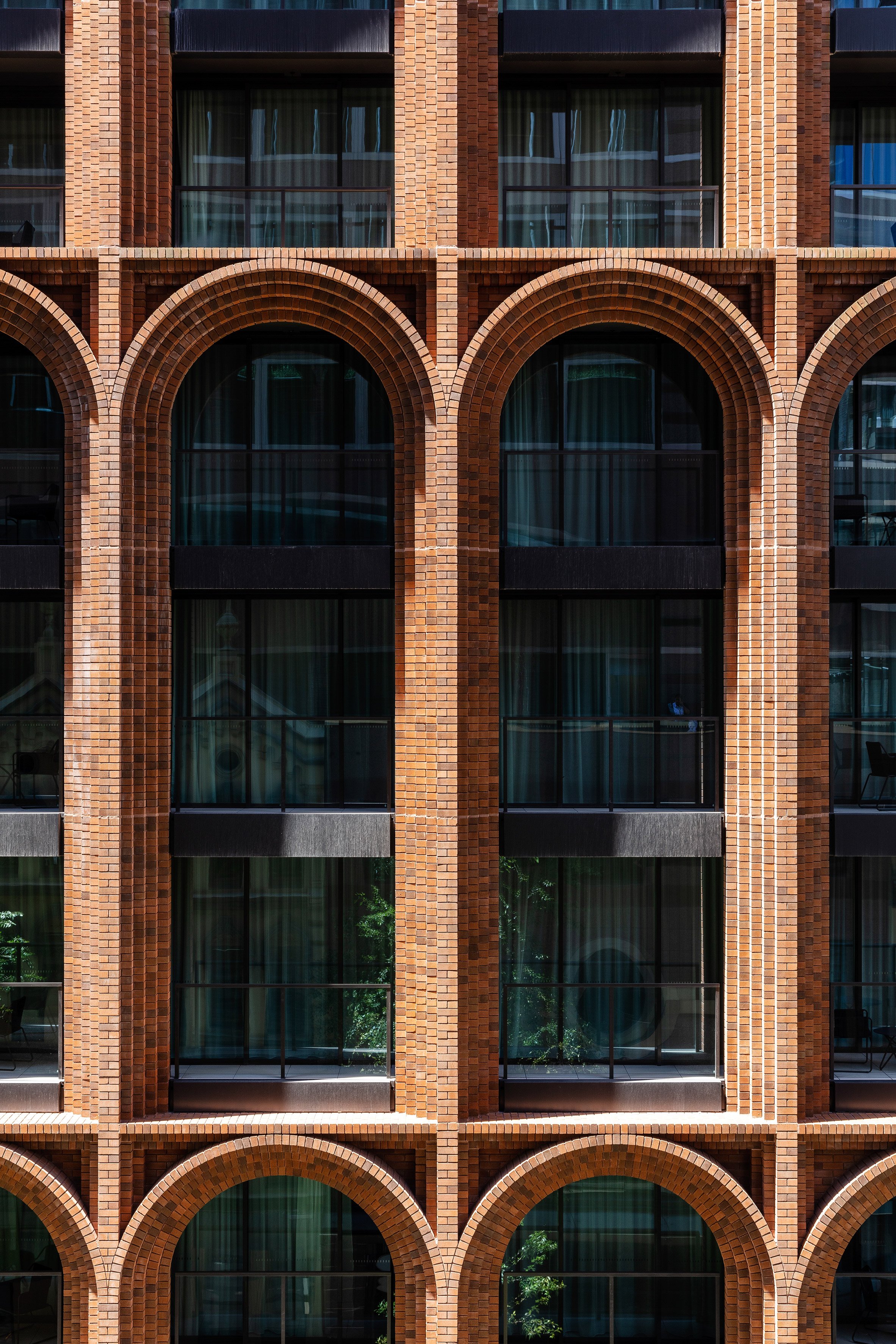 The podium is articulated by a series of double-height, stepped brick openings, some square and some arched.

These two brick sections sit either side of Skittle Lane, each with a glass tower above. The towers are linked above the alley, where the main entrance is located.

The two towers are formed by a series of arched steel sections that increase in height towards the centre to create two vaulted rooftop spaces which are open to the public.

“In Sydney the majority of the city has flat-topped buildings, where the roof is generally only used for plant rooms,” said Koichi Takada Architects.

“Arc is a celebration of the architectural roof feature, an opportunity to celebrate the great outdoor lifestyle that Sydney is famous for.”

Retail units occupy the ground level, while the sky suites above all benefit from balconies overlooking the street and shielded by the double-height arched reveals.

For the apartments in the brick block, a large atrium helps provide natural ventilation as well as drawing light down into the retail units at ground level. 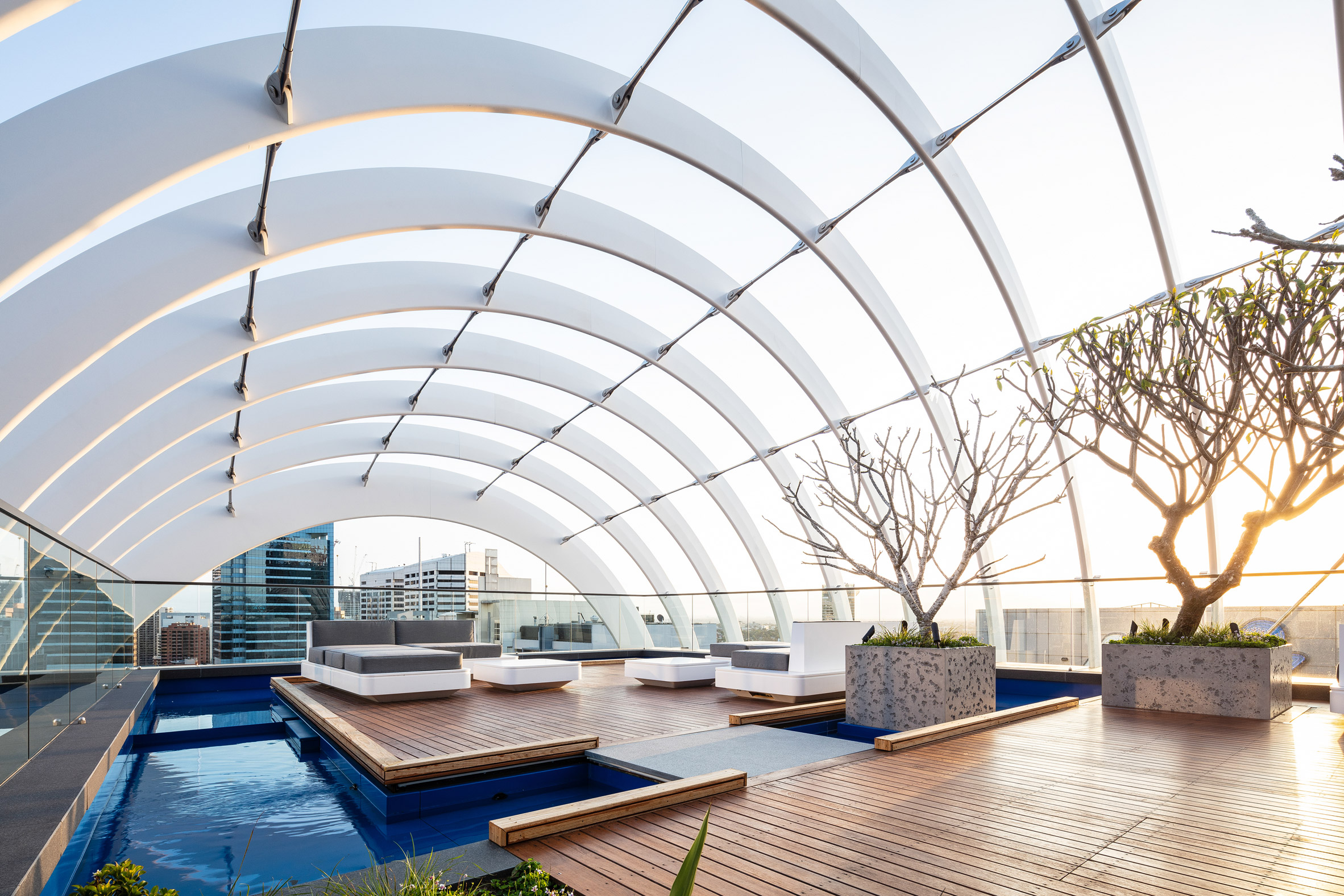 At the top of the towers 12 luxury apartments are accessed via two private lifts, including the three-bed “super penthouse”.

In the central lane, a light sculpture by Ramus Illumination has been installed, with thousands of LED lights stretching across a 12-metre atrium.

Several major architecture projects are currently underway in Sydney, including a redesign of the city’s landmark fish market by Danish firm 3XN. Düsseldorf-based Ingenhoven Architects and Australian practice Architectu have won the competition to design what will be Sydney’s tallest building.

Photography is by Tom Ferguson unless otherwise stated.