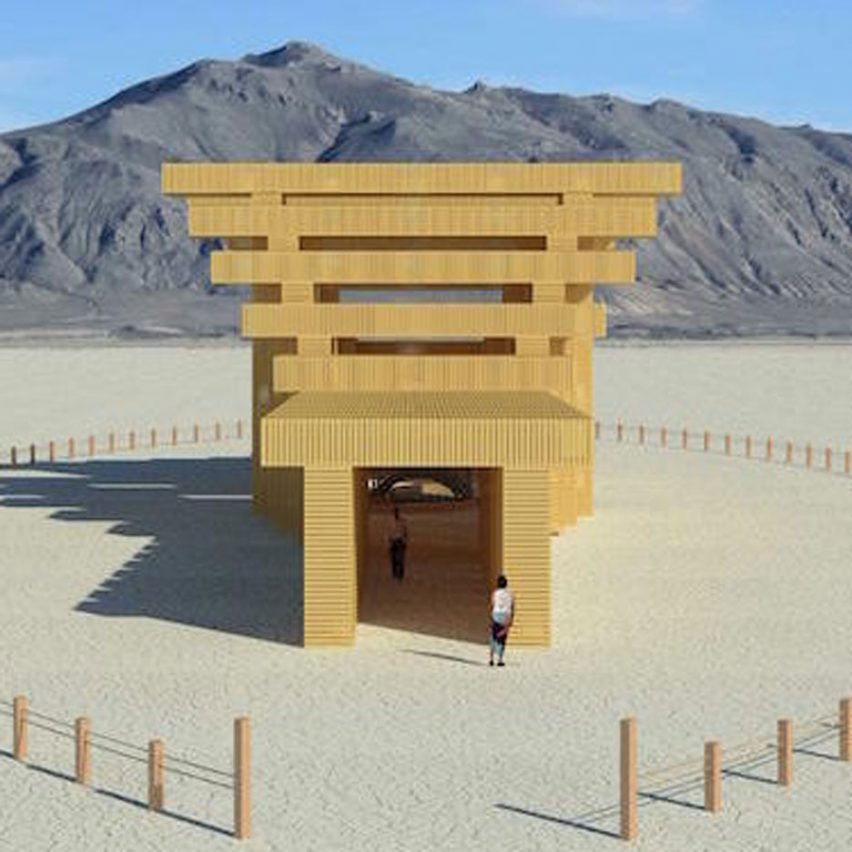 The temple for the next Burning Man event in the Nevada desert will be a linear structure influenced by Japanese torii gates.

The Temple of Direction by Geordie Van Der Bosch was chosen “for its elegant simplicity” by the Burning Man committee.

The design will form a centrepiece of the temporary Black Rock City during the annual gathering, which attracts around 70,000 attendees each August.

Comprising a series of wooden gates, based on those at the Fushimi Inari Shrine in Japan, the pavilion will form a passageway that steps upward from both sides to create an open central hall.

“The linear lines form a passage that expands into a large hall, eliciting both a physical experience and a metaphorical journey,” said a blogpost by the Burning Man team. “It’s a space that responds to the openness of the playa by creating a framework that encourages you to travel from end to end.”

The structure will measure 180 feet long, 37 feet wide and 36 feet high (55 by 11 by 11 metres), and be oriented so its four entrances will align with the cardinal points.

“This linear form reflects the passage of life with its beginning, middle, and end,” said the Burning Man team. “Throughout the structure there are areas that reflect this journey: narrow and wide spaces, bright and dark spaces, and tunnels that create intimate physical settings.”

Lanterns will decorate both the interior and exterior of the wooden frames, and the hall will feature an altar and plenty of shelves for the offerings attendees will make.

At the end of the event, the temple will be burnt down along with the namesake “man” and other structures built across the surrounding “playa”.

Burning Man has issued a call for volunteers to help build the temple, which will be primarily fabricated in Oakland, California, and for fundraising efforts to help realise Van Der Bosch’s project.

The San Francisco-based architect has also lived in England and Japan, and has attended Burning Man seven years previously.

Burning Man 2019 will take place 25 August to 2 September. Van Der Bosch’s temple will follow last year’s swirling structure by Arthur Mamou-Mani, which was captured from above along with other installations around Black Rock City by photographer Alex Medina.

In 2017, the temple by artist Marisha Farnsworth was built from 100 dead trees to emphasise “dramatic changes occurring in our forests”.

The event was first founded on a San Francisco beach in 1986 by Larry Harvey, who died earlier this year. In a 2015 interview with Dezeen, he spoke about the need for urban design as the event grew to its current size.