American firm Butler Armsden has designed this residence in northern California as a series of cedar-clad volumes, which are each accessed from a large outdoor area at the centre. 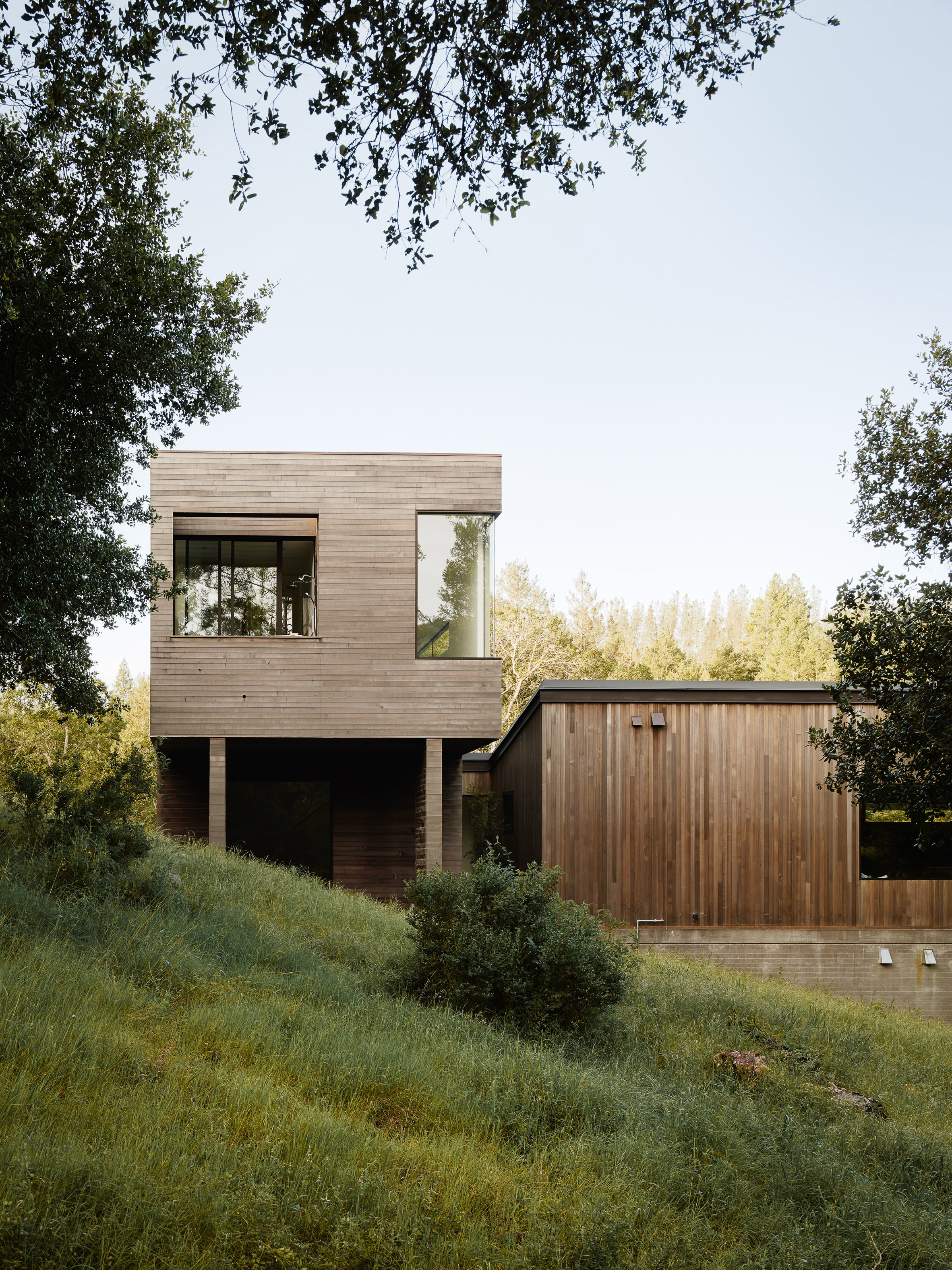 The project is named Valley of the Moon as a reference to the ancient name given by Native American tribes to Sonoma Valley, which the residence overlooks. 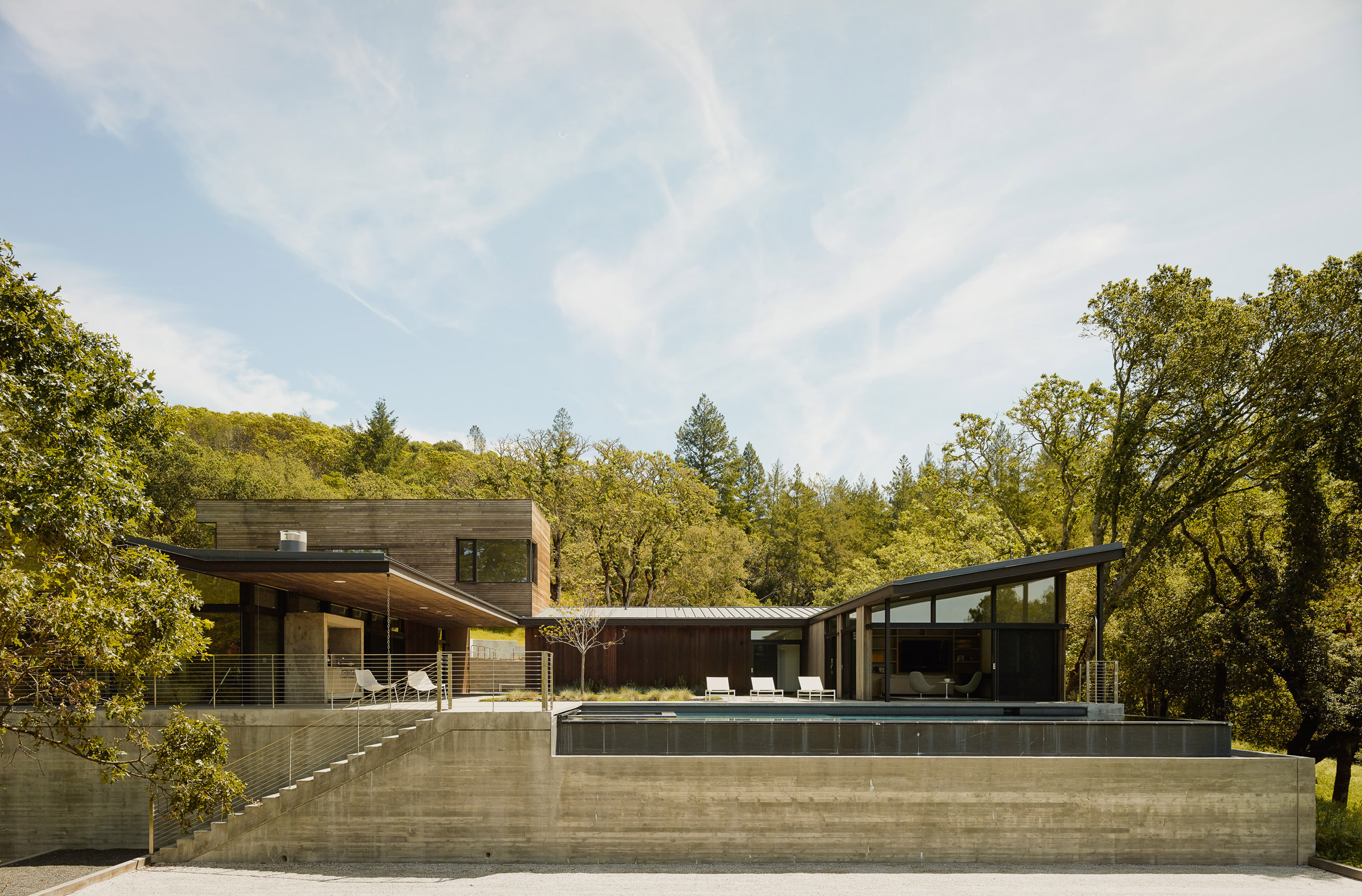 The entire complex is square in plan, with the rectilinear volumes organised around a courtyard in the rear, featuring a bocce court and saltwater lap pool. This arrangement draws on the haciendas that emerged in California during the 18th and 19th centuries, as the region became populated with Spanish missions. 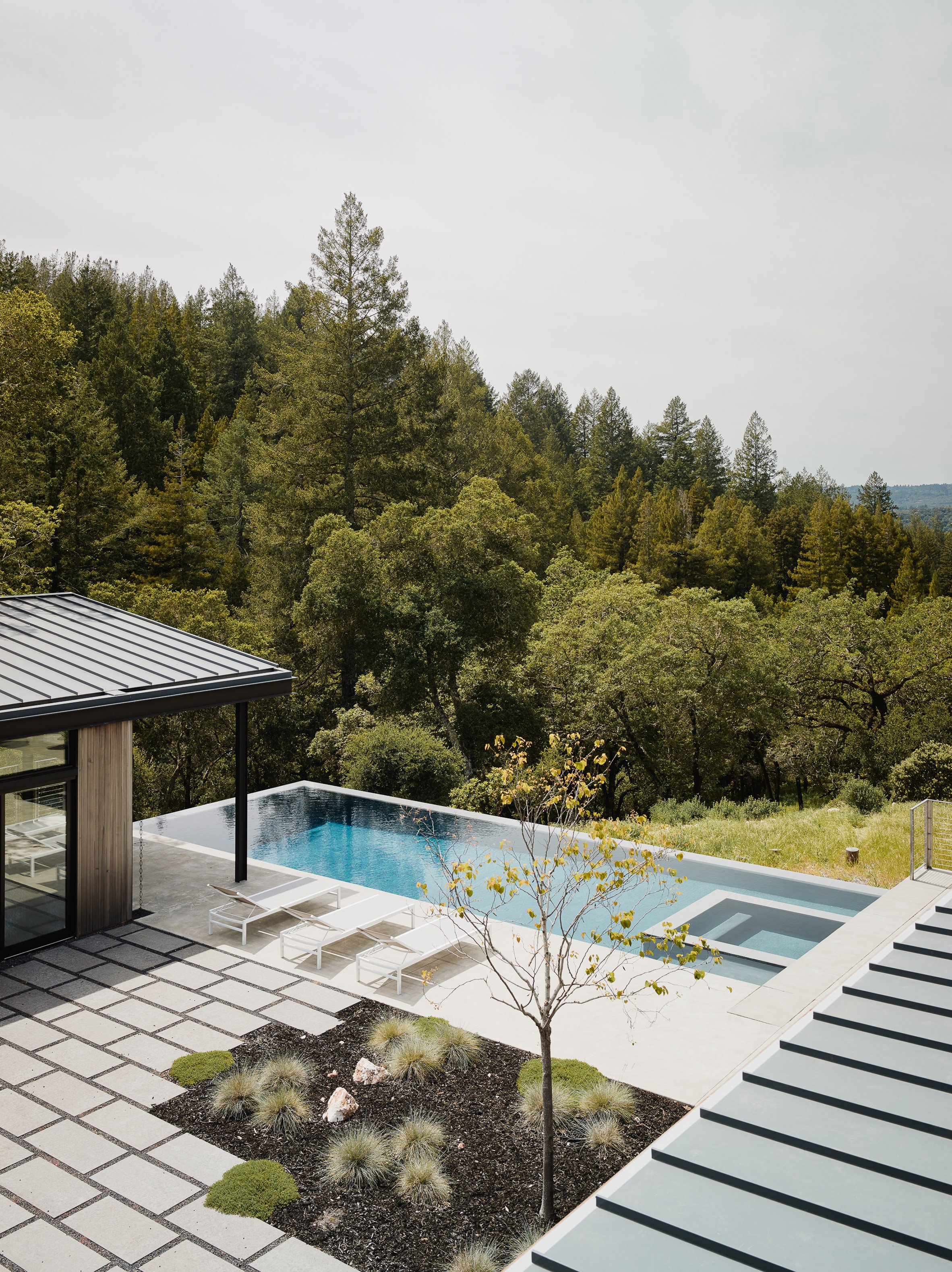 “The home adopts the courtyard model popularised by the early architecture of the area to allow the home to spill into its environment, while still offering the same sense of refuge provided by the valley,” said San Francisco-based Butler Armsden in a statement. 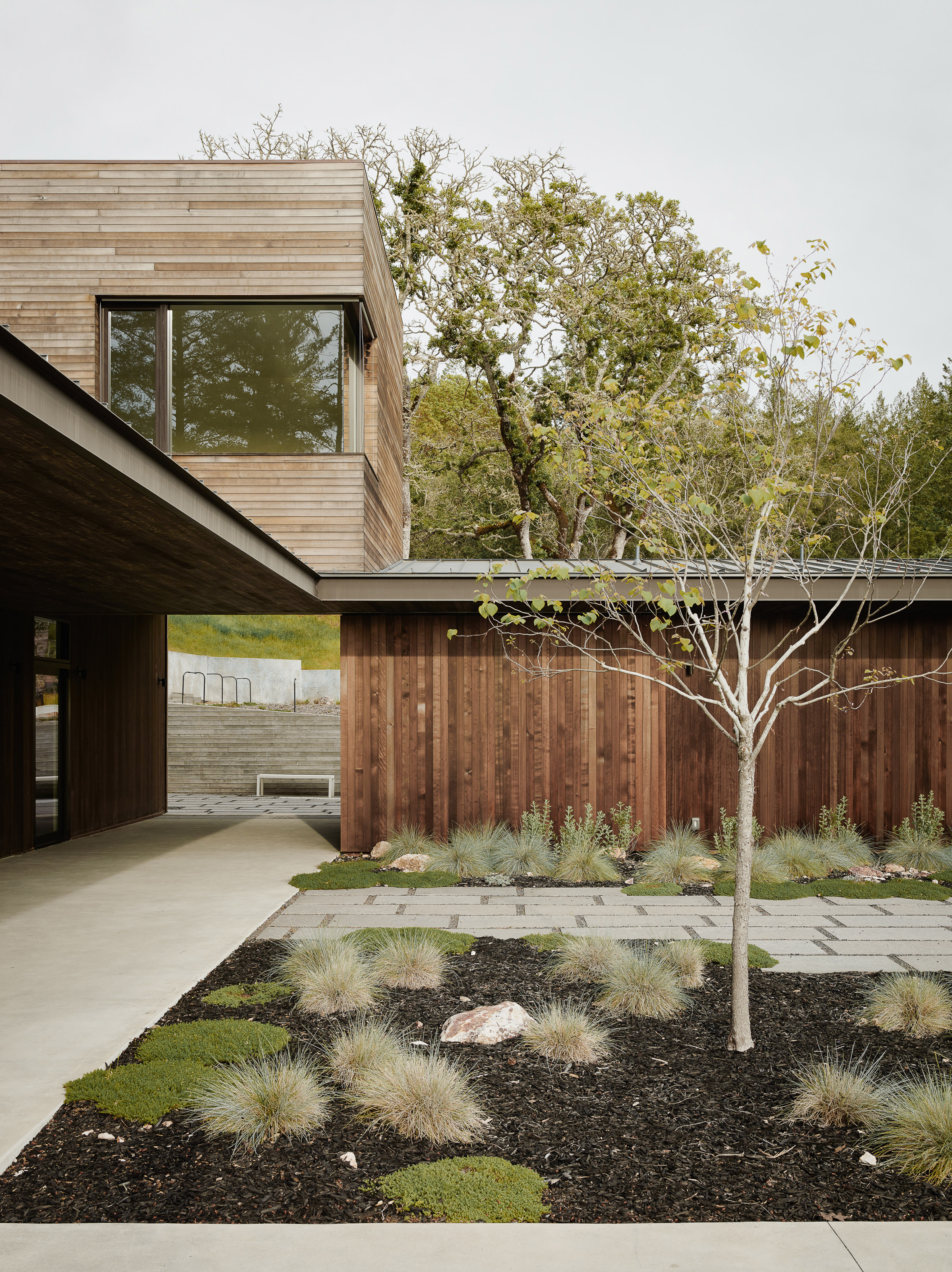 There is no formal front door. Instead, access is provided through a covered walkway that leads to the outdoor space.

“From there, each section of the home has its own entry,” the team said. “This allows the house to function equally well if it’s being used just for the immediate family or for larger gatherings.” 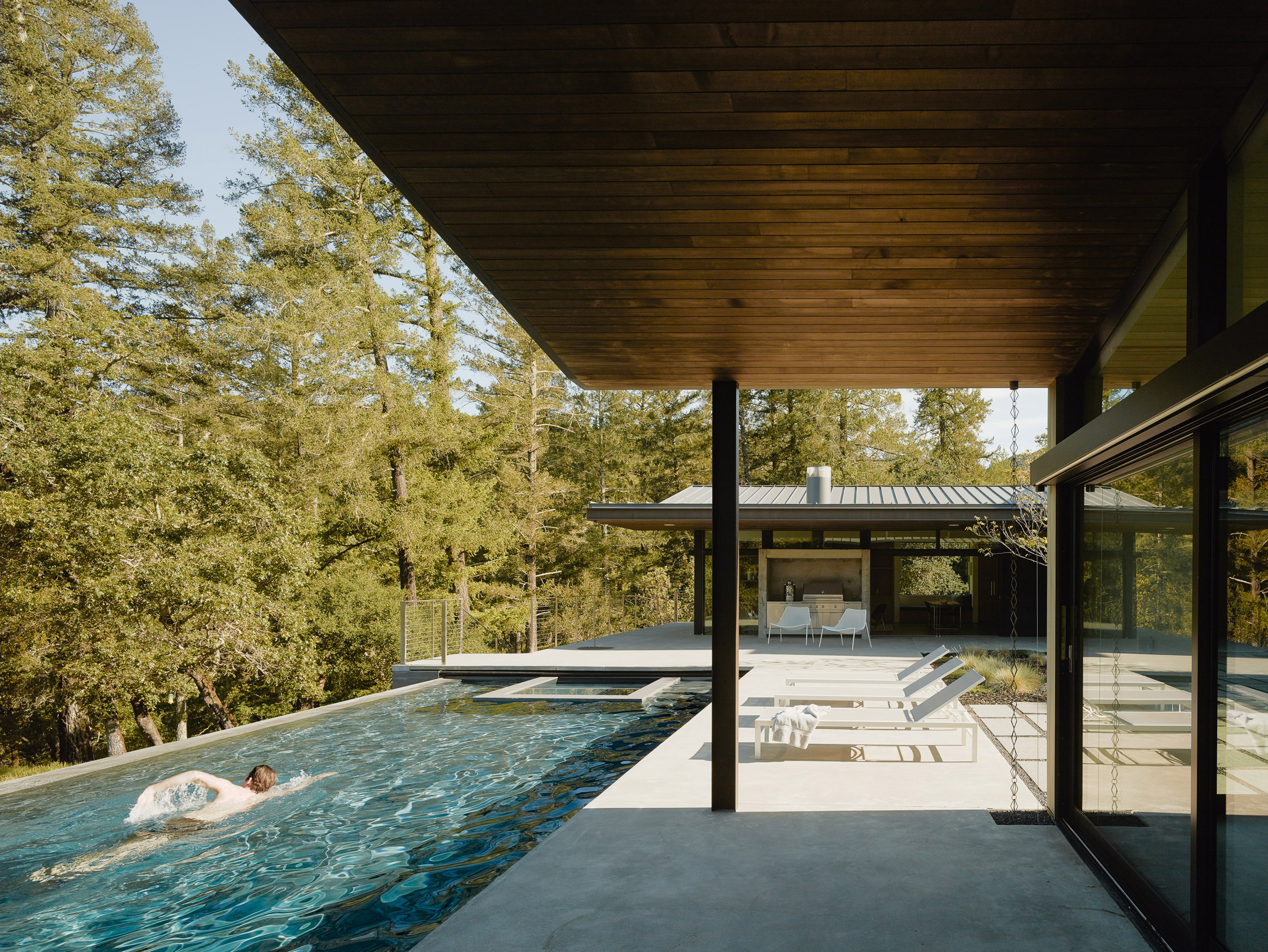 Designed for a couple with two children, the dwelling sits on a gently sloping, three-acre (1.2-hectare) site within a larger area of dedicated open space. 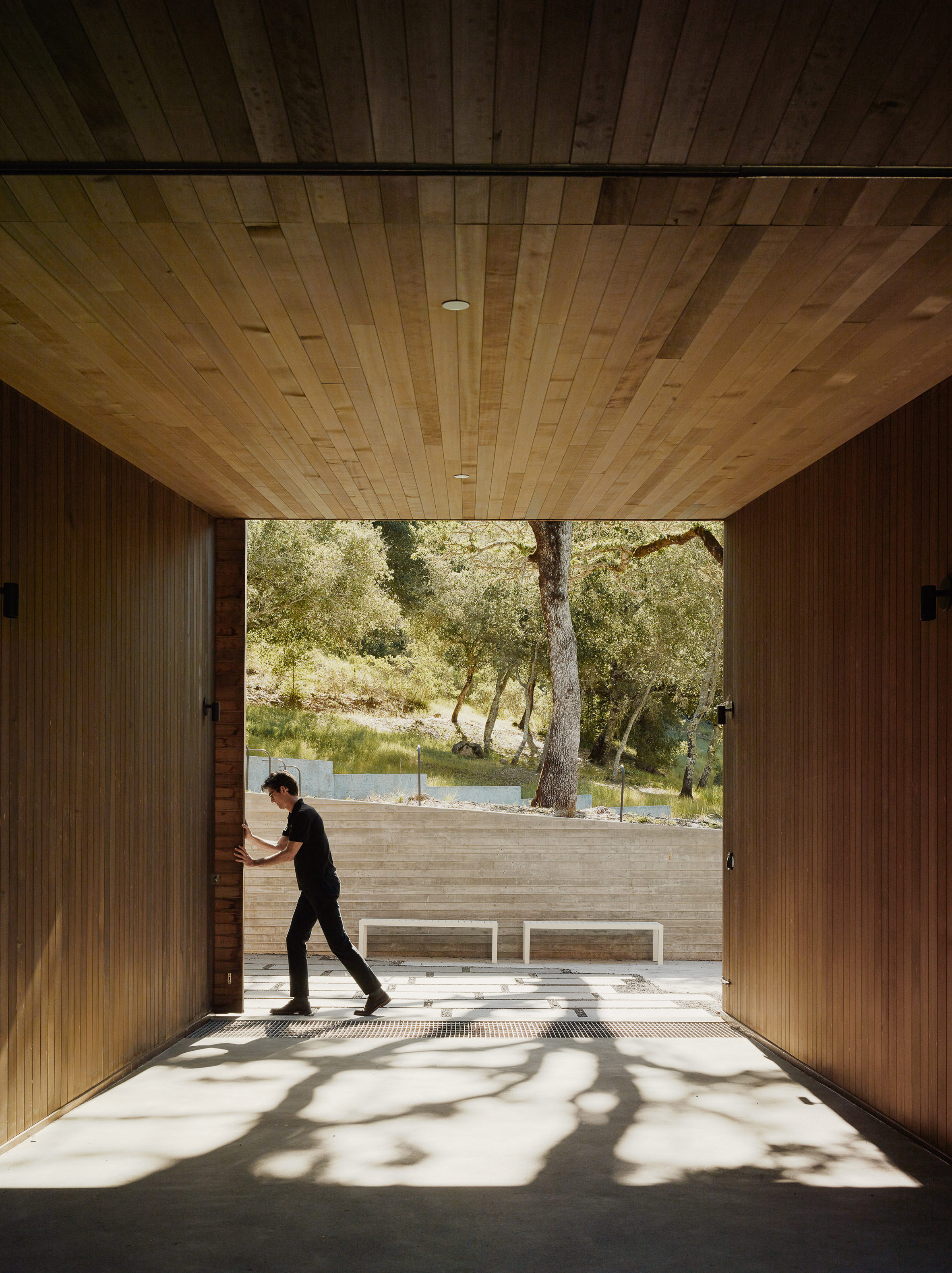 “The property is secluded and tranquil,” said Butler Armsden. “Its only neighbours are native oaks and redwoods.”

The exterior cladding helps the home blends into its site. Facades are wrapped in Alaskan yellow cedar, a low-maintenance and durable wood that weathers over time to a light grey. 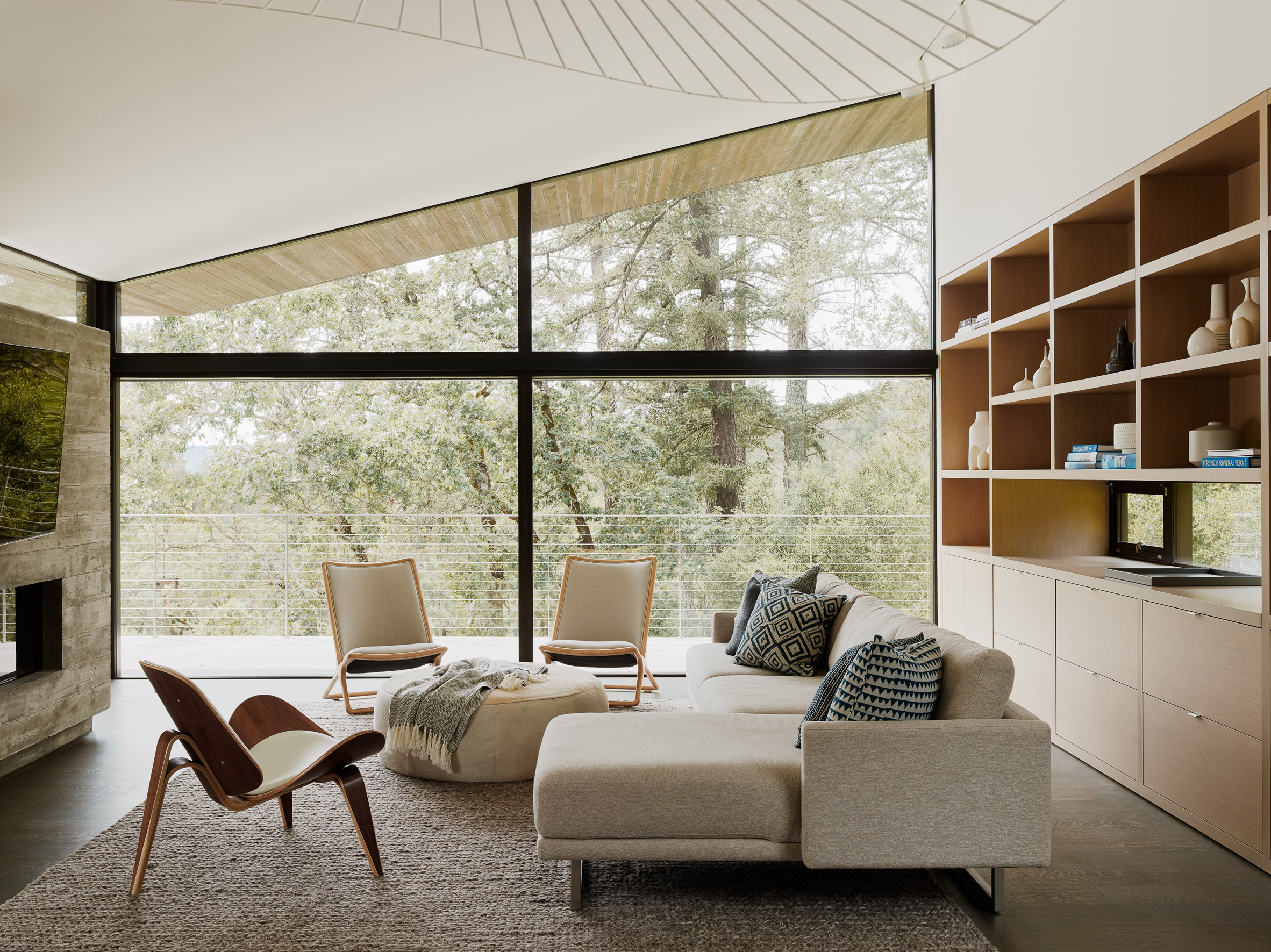 The northern portion of the home rises two levels and is wrapped in horizontal siding, which is meant to visually anchor the building to the landscape. The other side, which is one level, is clad in vertical siding that takes on the “rhythm of the surrounding trees and grasses”. 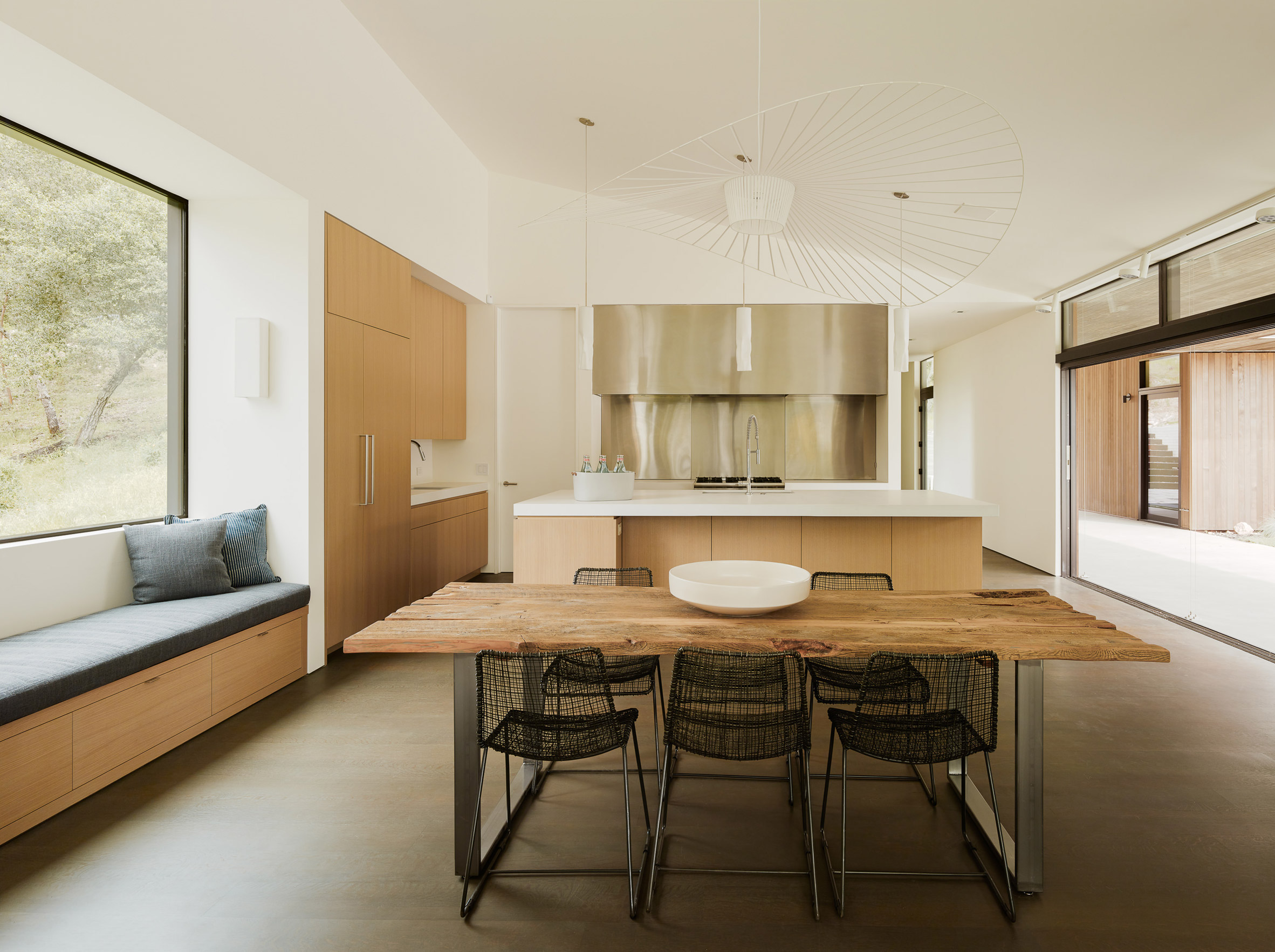 Inside, the team used neutral colours and a restrained material palette, with carefully positioned windows offering curated views of the wooded terrain.

“In moments, a window seamlessly spans a corner, the home again calling into question the boundary it draws between itself and its surroundings, breaking the frame,” the studio said. 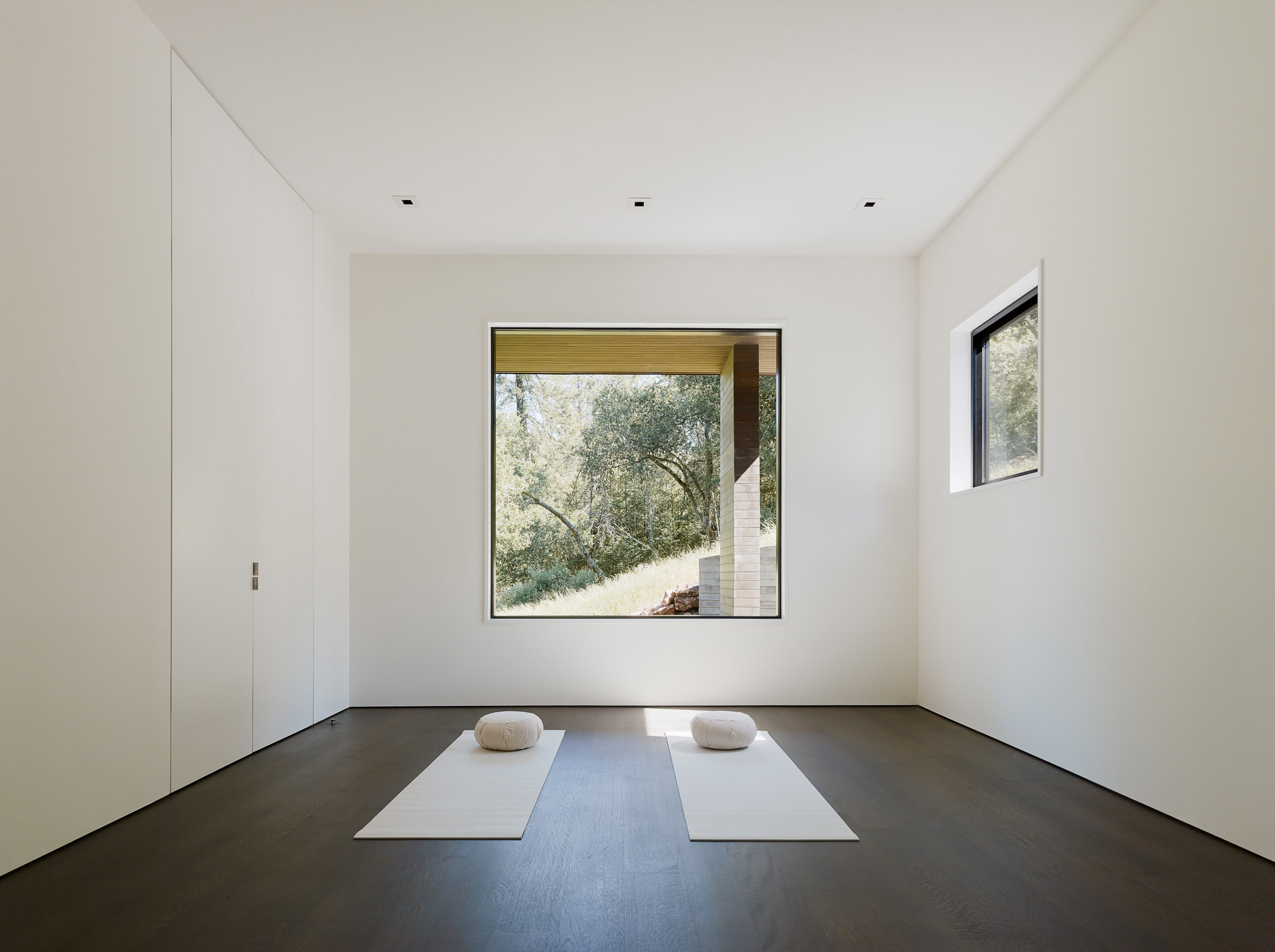 A number of sustainable elements are also incorporated into the design. The home generates its own electricity and hot water, while deep roof overhangs help reduce energy use. 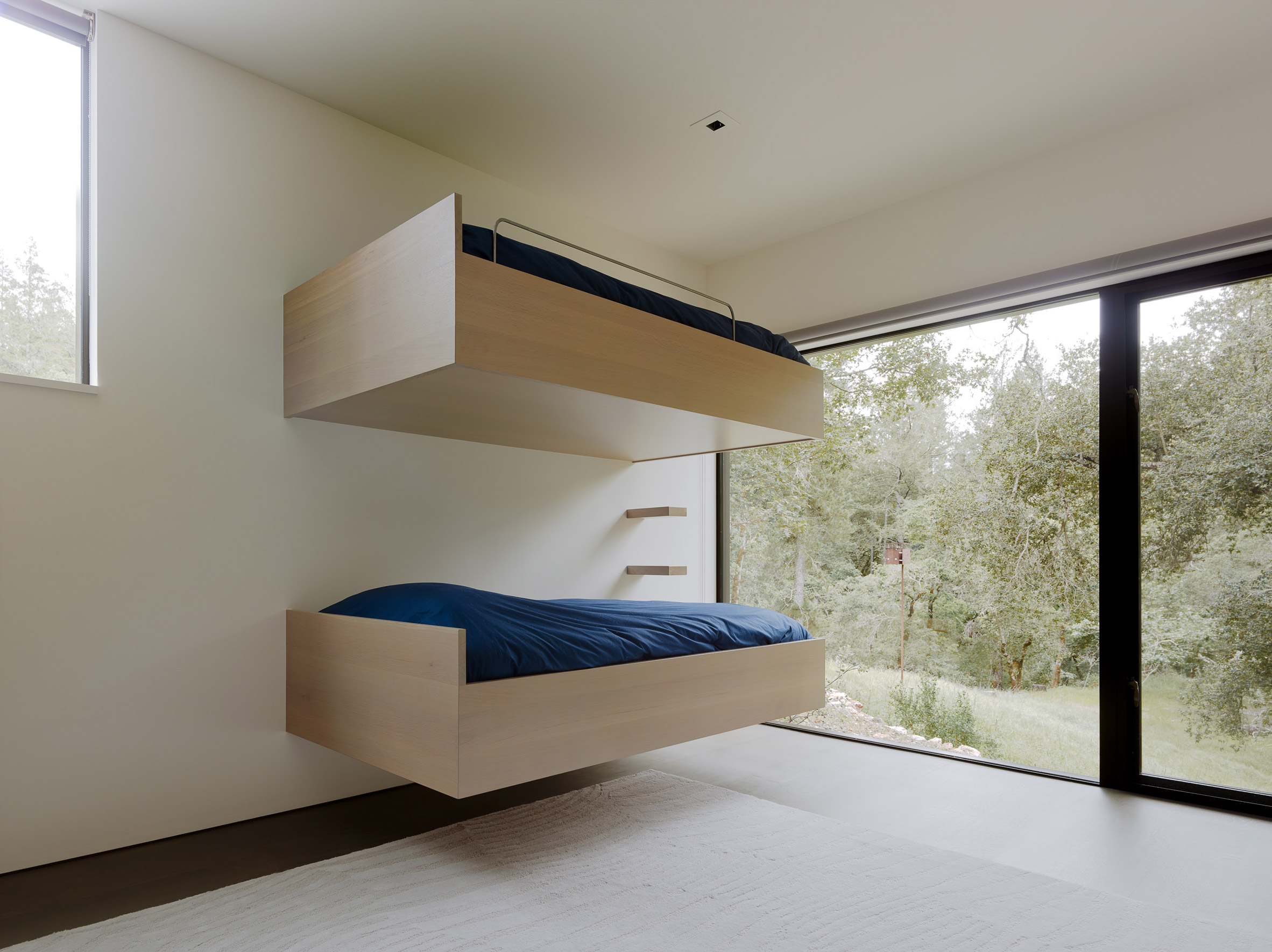 Moreover, the house is positioned so that it captures prevailing breezes. The project earned a Silver Leadership in Energy and Environmental Design (LEED) certification from the US Green Building Council, in recognition of its environmental performance. 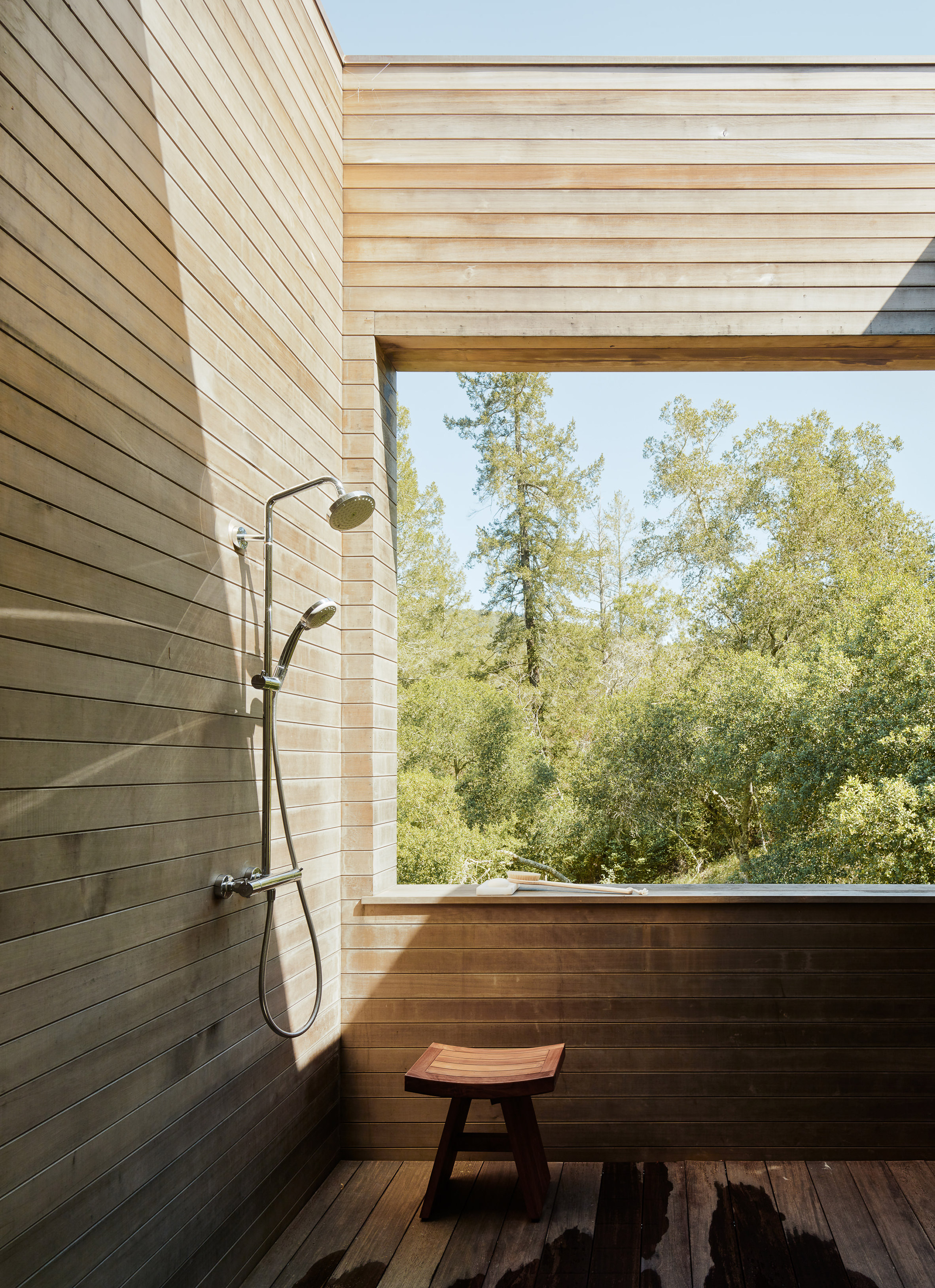 Founded in 1985, Butler Armsden is led by the husband-and-wife team Lewis Butler and Catherine Armsden. Other projects by the firm include Bluff Reach, which involved updating and expanding a 1970s, wood-clad residence overlooking the Pacific Ocean.

The post Butler Armsden’s Valley of the Moon house in California has no front door appeared first on Dezeen.