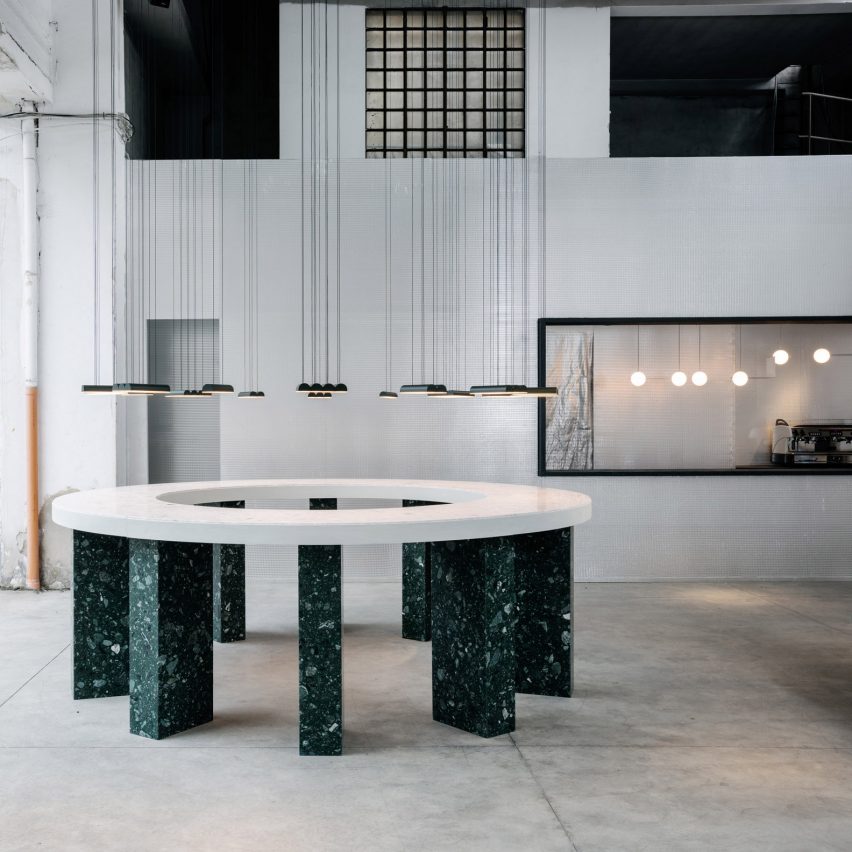 Montreal design studio Lambert & Fils has worked with Milanese DWA Design Studio on a six-day pop-up cafe for Milan design week, with the aim of sparking dynamic conversations over food.

Based in the Alcova exhibition, which launched at Milan design week last year, Caffè Populaire will host dinners throughout the week. Against the backdrop of the industrial venue – a former panettone factory – Frederik De Wachter and Alberto Artesani of DWA Design Studio have created a dining space that celebrates “raw but refined materials”, rather than digital technologies.

“It’s anti-digital, because we wanted people to talk to each other, and to gather around food and talk during the Salone, rather than just being on their computers and taking pictures of things,” explained De Wachter.

“We wanted to make this very relaxed atmosphere without adding the pressure of being digital, so you won’t find screens in this space,” he told Dezeen. 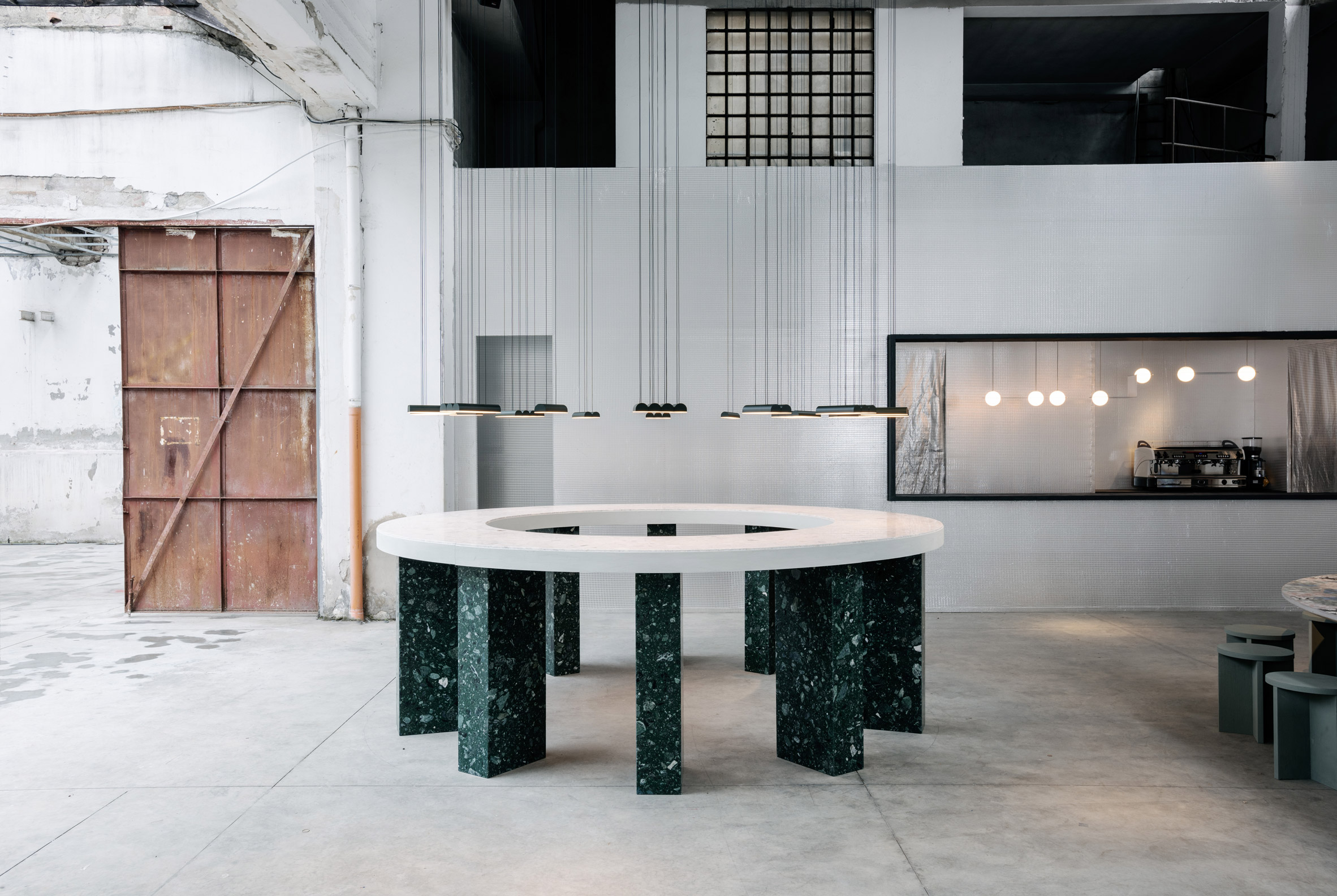 The designers see the project as an antidote to the usual stand at a furniture fair, which neither DWA Design Studio or Lambert & Fils have found to be a useful way to talk to people about their work.

“In the beginning we were thinking about Alcova’s location on Via Populi Uniti which means ‘united people’, so we wanted to do something for the people, which gave us the name,” said De Wachter.

“We wanted it to be a very social place, very open and not posh, a really friendly place. The idea of bringing people together with food was the natural conclusion.” “The inspiration came from an 18th-century painting of a dinner at a U-form table, and we liked the idea of it, as it’s an imperial table, but with a bend,” said De Wachter. “It was something we’d never seen before.” The table is constructed from a material called Silipol, first created by Italian architect Franco Albini. It is made by mixing and compressing marble and granite dust with coloured pigments, and forming these into slabs. Albini clad the walls of the Milanese metro with Silipol – a connection the designers were keen to convey.

The table is surrounded by a set of pea-green stools. The stools and the base of the table have been finished in the same tactile green by Belgian architectural finishing expert Antoine.

Antoine was responsible for many of the surfaces in the cafe, including a dramatic red backdrop in lime plaster that responds to, and contrasts with, the walls of the former factory space, and a neutral lime plaster wall adjacent to the main table. Food is plated on porcelain by French manufacturer Revol. 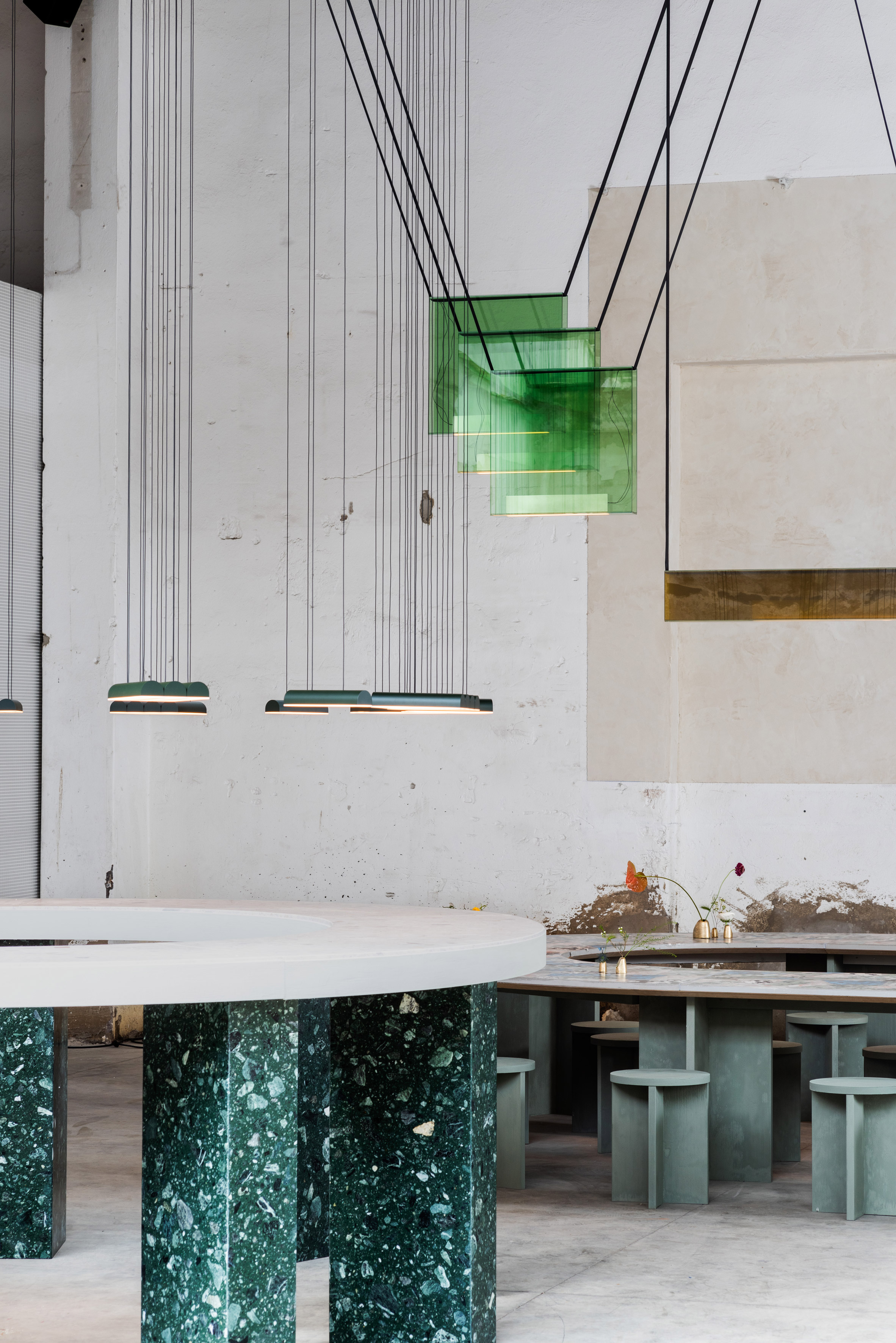 Lighting is provided by Lambert & Fils, including the two latest collections Sainte and Hutchinson. Inspired by archways and Roman terracotta roofs, the Hutchinson pendant lights have scalloped tops and are made from aluminium with a matt painted finish.

The lights come in single, double, triple or quadruple elements and hang on long deliberately visible black wires above the circular bar.

“For me the alphabet of this light is one, two, three four,” said Lambert, who isn’t intending to add further arches to the design.  The studio are also not planning to make the delicate lights in larger sizes. Lambert & Fils’s founder Samuel Lambert initially sketched the arched design because he was bored of seeing generic arches at design fairs and wanted to see how he could update the shape.

“For me it’s an architectural reference,” he told Dezeen. “It’s the archetype, to play with the simple archetype of arches and extrusion. And it’s also the tile of the European roof.” The Sainte lights, which hang above the communal table, are made from suspended slabs of coloured glass and hang in mid-air from thick black straps. The lamps have three elements, the rectangular extruded glass surround, the block of aluminium that contains the lighting element and the straps that hold them up.

“The whole process was about not adding anything unnecessary. We had to figure out how to get the wire to the top of the glass element as discreetly as possible,” said the designer.

This is the first time that Lambert & Fils has shown the Sainte lights, the scale of which were designed with the Alcova space in mind.

“It’s nice to have lamps that take up a lot of space without visually taking up a lot of space,” said the designer. “To have a presence without taking away from the surroundings. We were always thinking about where the lamp would be placed and how it would interact visually with everything around it.”

The circular bar, which stand adjacent to the communal dining table, has a white terrazzo top and stands on chunky green terrazzo legs. The white marble is Carrara, while the green marble was sourced from the Italian Alps.

“This is the past and the present,” reads the project text. “Because after all, food is the oldest way to socialise and to host is to celebrate. This is not an Instagram wall, or photo-booth. In a sense, this is the anti-digital.”

Other designers venturing into hospitality during Milan design week include Tom Dixon, who has opened a permanent base in the city, the restaurant and showroom The Manzoni, and Maarten Baas, whose Bar Baas is a tongue-in-cheek take on the popular Milanese drinking hole Bar Basso.

The post Caffè Populaire is an “anti-digital” pop-up bistro that encourages you to put away your phone appeared first on Dezeen.