Carmody Groarke has unveiled plans to erect a see-through hood over Charles Rennie Mackintosh‘s Hill House in Helensburgh, Scotland, to help protect it from the elements during conservation works.

Mackintosh, a key figure in Britain’s Arts and Crafts movement, designed and built Hill House as a home for the publisher Walter Blackie between 1902 and 1904.

Located around 40 kilometres outside Glasgow in the coastal town of Helensburgh, the house has been subjected to decades of exposure and its striking Portland cement render has suffered moisture damage.

The house was left in the care of the National Trust for Scotland in the 1980s and the preservation organisation is now undertaking work to restore the building that is described stylistically as a mixture of “Arts and Crafts, Art Nouveau, Scottish Baronial and Japonisme”.

London architects Carmody Groarke have been brought on board to create a weather-proof envelope to protect Hill House during these restoration works.

“The National Trust of Scotland is adopting a very bold approach to the conservation of the Hill House; one that is radical and experimentative in seeking new methods to extend the lifespan of our heritage, and one that invites public interaction and interpretation of these processes,” said architect Andy Groarke, who described the restoration project as pioneering. 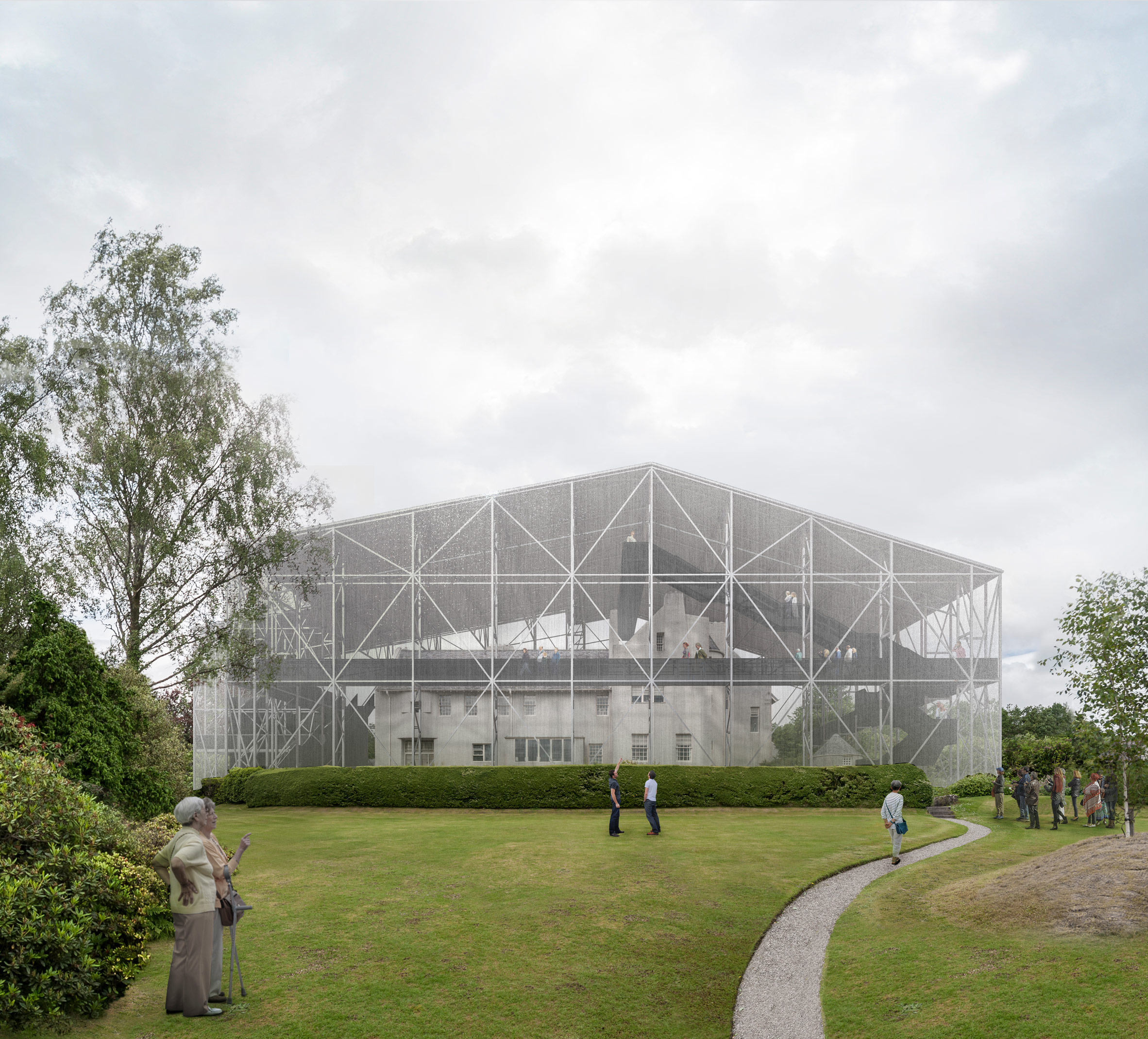 The transparency of Carmody Groarke’s enclosure will mean the house remains on view and open throughout the restoration process. Stairs and gangways inside the see-through skin will permit visitors close-up views of the exterior of the house, and to watch the restoration work progress.

Dutch studio Oving Architecten employed a similar design to help protect the former home of an SS commander at the Nazi concentration camp Westerbork against the elements, preserving it as a memorial to the holocaust.

“We are building what amounts to a shield around and above the Hill House to keep wind and rain out and give the building a chance to dry,” explained Simon Skinner, chief executive at National Trust for Scotland.

“The new structure is effectively a porous cage, albeit a beautifully designed one, that still allows some movement of air and a degree of moisture penetration.” 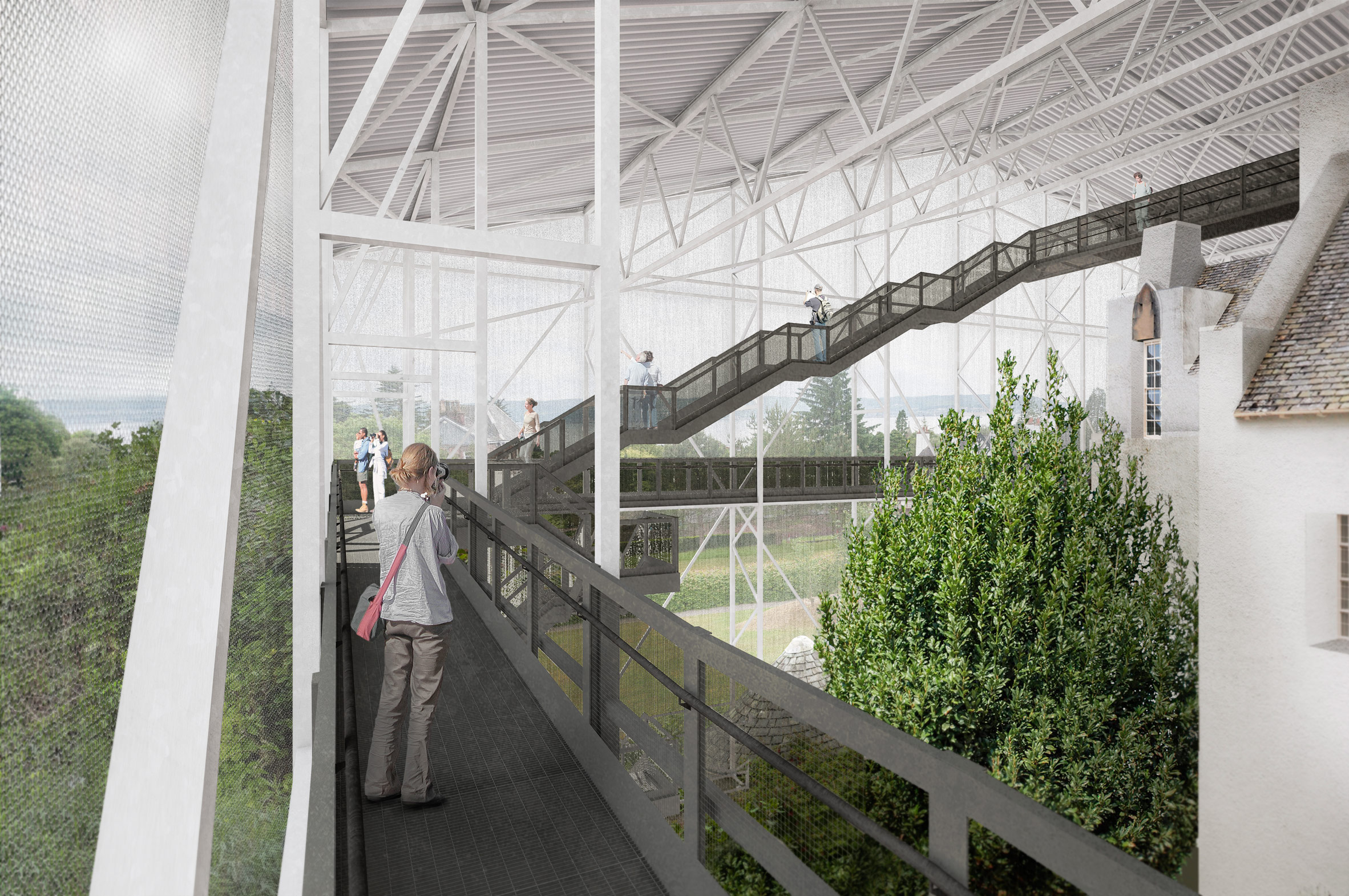 The house also includes interiors – from furniture to textiles and artworks – designed by the architect and the artist Margaret Macdonald, Mackintosh’s wife.

Mackintosh is perhaps best known for his Glasgow School of Art building, which – like Hill House – was commissioned as a complete design and features interiors by the architect. The building is also undergoing restoration works after a fire ravaged the building in 2014.

“Charles Rennie Mackintosh was in the vanguard of using the materials and creating the kinds of buildings that became the vernacular in the 20th century,” said the trust’s general manager Richard Williams.

“As the 21st century progresses, more effort is being made around the globe to preserve important structures from the preceding century and the lessons we learn can be applied by others.”

National Trust for Scotland will be launching a fundraising drive in 2018 to help finance the restoration works, which will cost millions of pounds. A significant donation from the Getty Conservation Institute has already been secured.

Carmody Groake, which was founded by architects Kevin Carmody and Andy Groarke in 2006, is also currently working on plans for an art gallery and a suite of studios at the brutalist Park Hill estate in Sheffield, England, and a skyscraper in London’s Paddington.