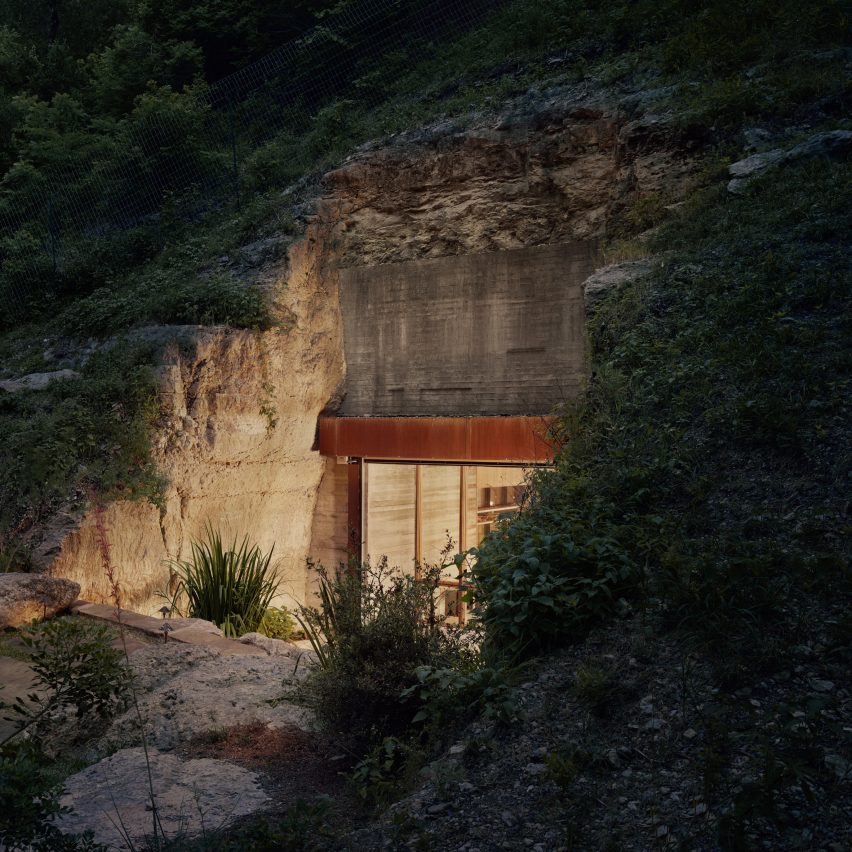 San Antonio architecture firm Clayton Korte has nestled a wine cellar into the rolling hills of Texas, tucked away in a limestone cave so it disappears into the surrounding landscape.

The cave is located in close proximity to the owner’s ranch, in the rugged countryside around Austin.

The wine cellar includes a tasting room, bar and restroom, as well as a collection of 4,000 bottles stored at an optimal temperature thanks to the colder, subterranean climate.

When local practice Clayton Korte, formerly Clayton & Little, came on to the project, the owners had already excavated a tunnel into the hillside, measuring 18 feet (five metres) tall and 70 feet (21 metres) deep.

Within this opening, the firm inserted a wooden module like a “ship in a bottle”, to create an interior that is both waterproof and human-scale.

“We started with a 3D scan of the existing excavation using our Matterport Pro2 camera and three-dimensionally mapping all of the irregularities of the existing cave,” Clayton Korte principal Brian Korte told Dezeen.

“By carefully manipulating the solids and voids of the wooden box insert, the cave could be concealed and revealed to the occupant, leveraging the good qualities of subterranean construction while protecting from unwanted moisture and darkness.”

The entrance is capped with a board-formed concrete portal, which helps to hold back any loose stones or gravel while melding the wooden volume with the irregular surface of the limestone.

Eventually, this will be overgrown by native moss and ivy to help the intervention, which is already concealed behind tall oak and elm trees, to further merge with its setting.

Limestone boulders collected from the original excavation form a small entry courtyard, terraced planting beds and several slab steps that lead down into the cave.

A wall of windows framed with steel and wood allow daylight to filter into the interior while providing a visual connection to the outdoors.

“It maintains one’s sense of subterranean occupation without the overwhelming environmental conditions that would make one seek to leave,” said Korte.

Inside, the dropped ceilings are panelled in vertical-grain Douglas fir while the walls are clad in either raw or ebonised oak.

The walls of the original cave, which are lined with sprayed concrete, are strategically exposed throughout the interior and contrasted against the warmth and tactility of the timber.

The same custom-insulated glazing that lines the entrance is also used to separate the lounge from the chilled cellar beyond.

Set at the very back of the plan, this opens up to reveal the tall, vaulted ceilings of the original cave and offers flexible storage for the owner’s growing collection.

Several of the furniture pieces throughout the interior, including the tasting bar and floating restroom vanity, are custom-made from reclaimed cedar wood sourced from a local sawmill.

“They originate from felled trees in the area as a result of a major 200-year river flood that decimated some amazing Cedar and Cypress trees. We were happy to be able to give these slabs a new life,” Korte explained.

Formerly known as Clayton & Little, Clayton Korte recently changed its name to reflect a change in leadership and ownership, with co-founder Emily Little staying on as partner emerita.

Previously, the firm has created a barn from reclaimed oil field pipes and weathering steel panels for a California winery and renovated a mid-century residence in Austin.

Photography is by Casey Dunn.