A garden within a water tank is raised up on colourful geometric columns to form this pavilion, built by Studio Weave alongside the new US embassy in Nine Elms, London. 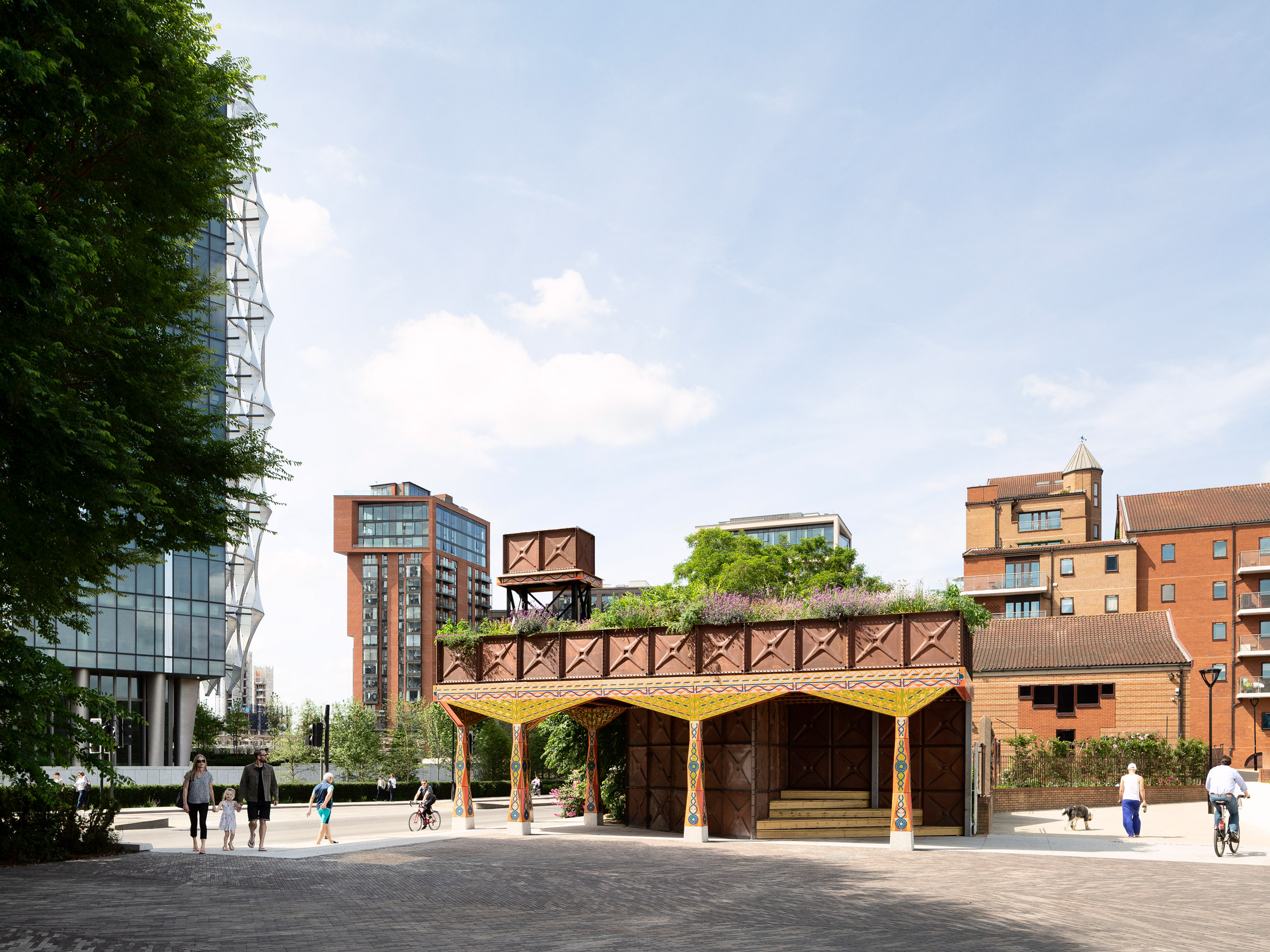 Set on a small square, the pavilion provides seating and shelter for those using the recently reinstated Thames Walk Path and nearby offices. 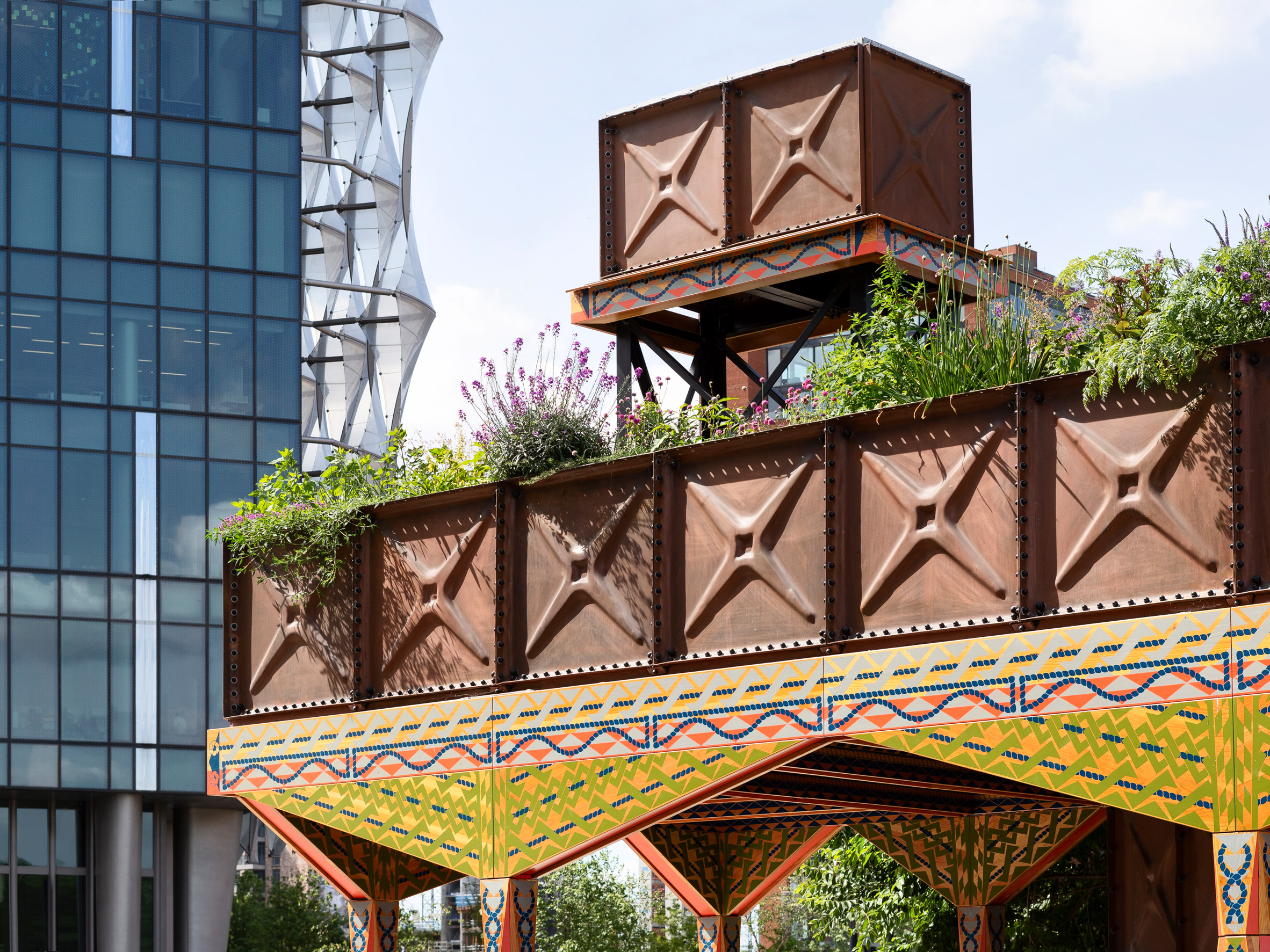 The raised garden, which contains hawthorn trees, a “rainbow” of grasses and perennials plants, is contained with a watertight structure made from copper-coated panels, typically used to construct water tanks.

This garden is supported above the ground on a steel structure, covered in colourful wooden panels that are designed by print artist Linda Florence. 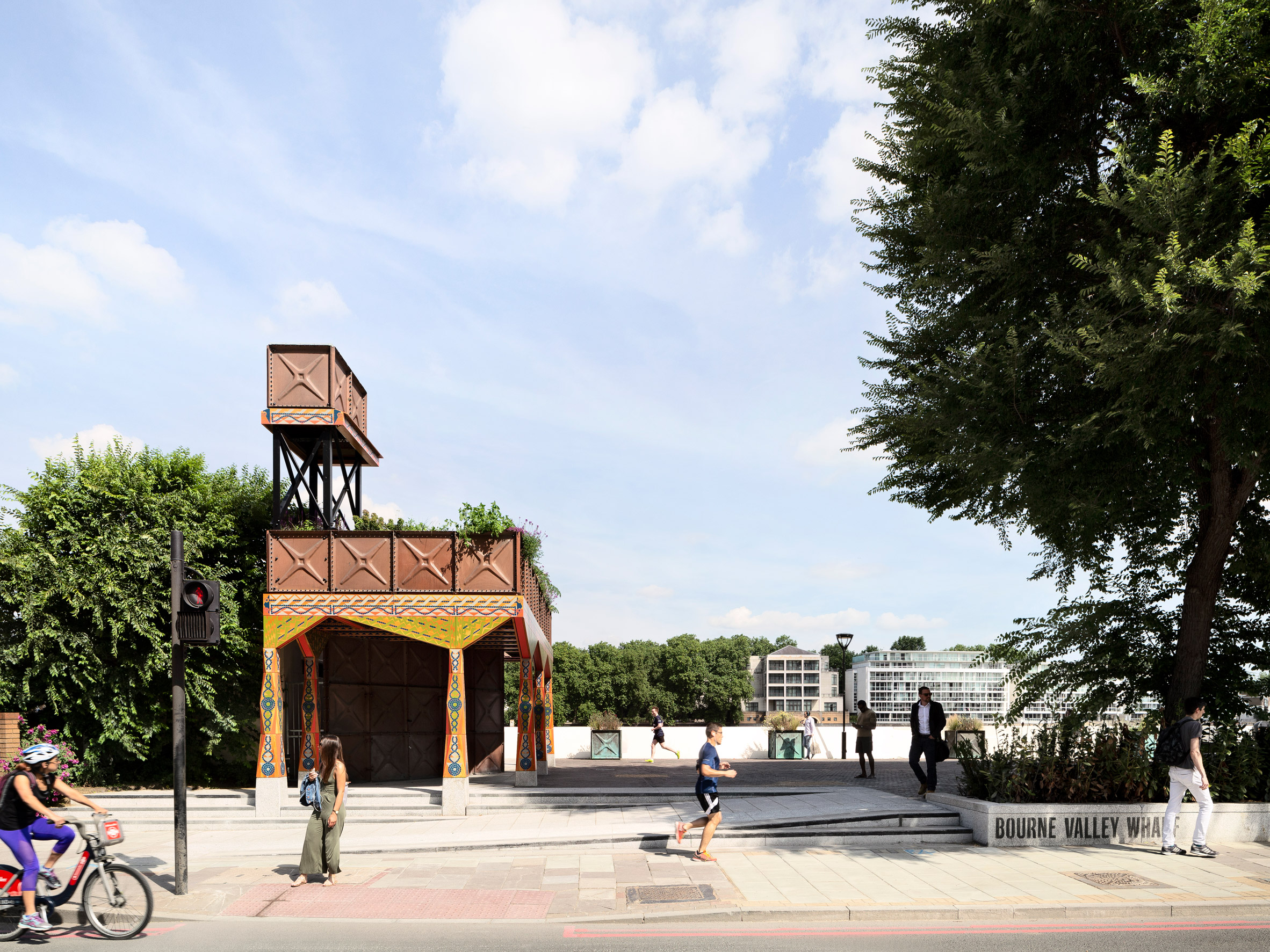 “There was a need for biodiversity as part of the site’s development requirements and we also wanted to create a canopy for people to sit under,” said Je Ahn, a founding director of Studio Weave and a judge of the Dezeen Awards.

“Seeing the water tower at New Covent Garden Market was moment when things clicked into place of how we could achieve both aims within limited budget and space,” Ahn told Dezeen.

“Using water tank panels allowed us to create a raised garden that was watertight, as the system is designed to hold a vast volume of water.” 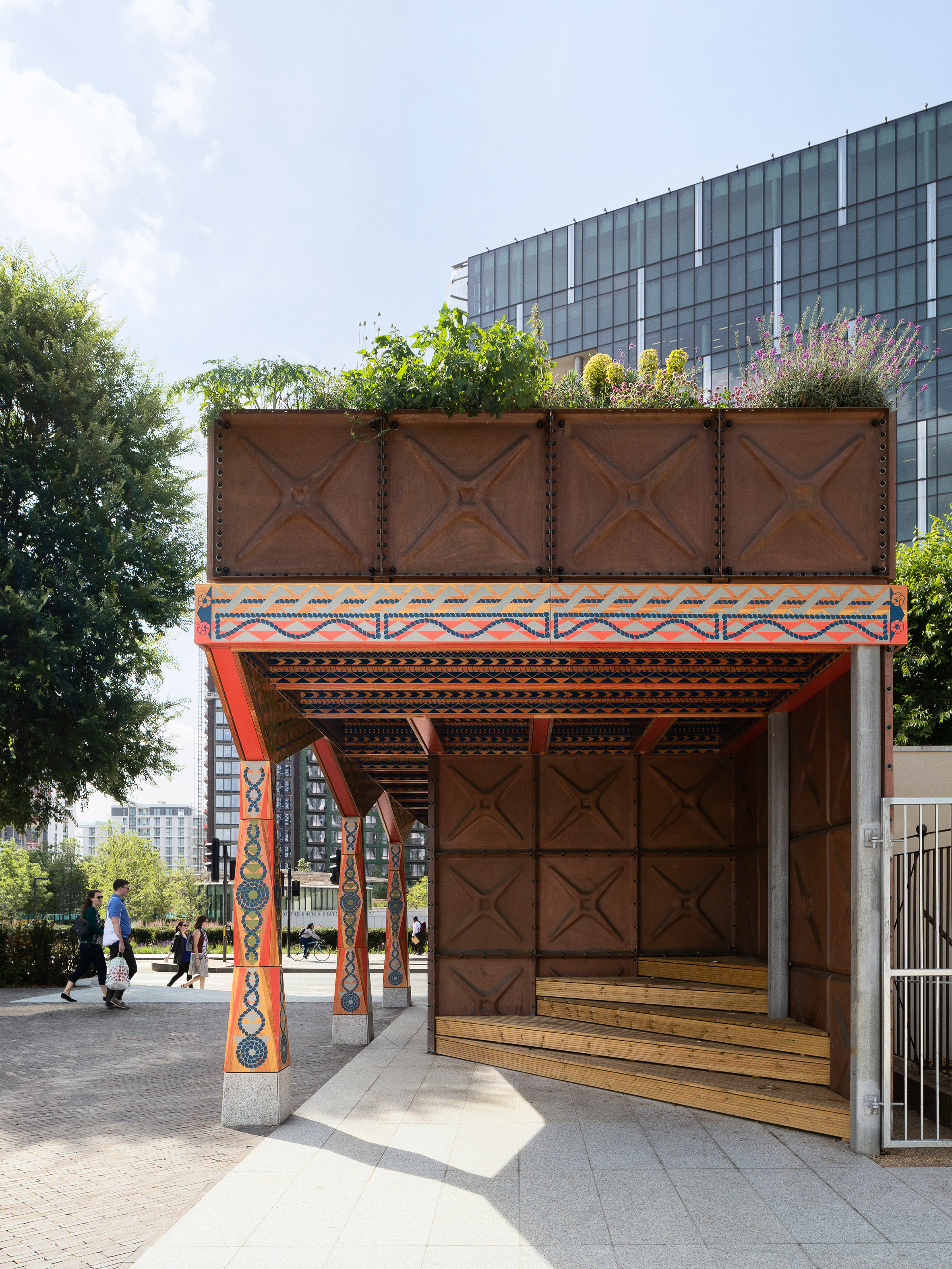 Both the water-tank panels and the support structure reference the area’s industrial heritage and the quay structures that have now largely been removed from this stretch of the Thames.

The colourful patterns are a reference to bridges built during the industrial revolution that were often painted in vibrant colours. 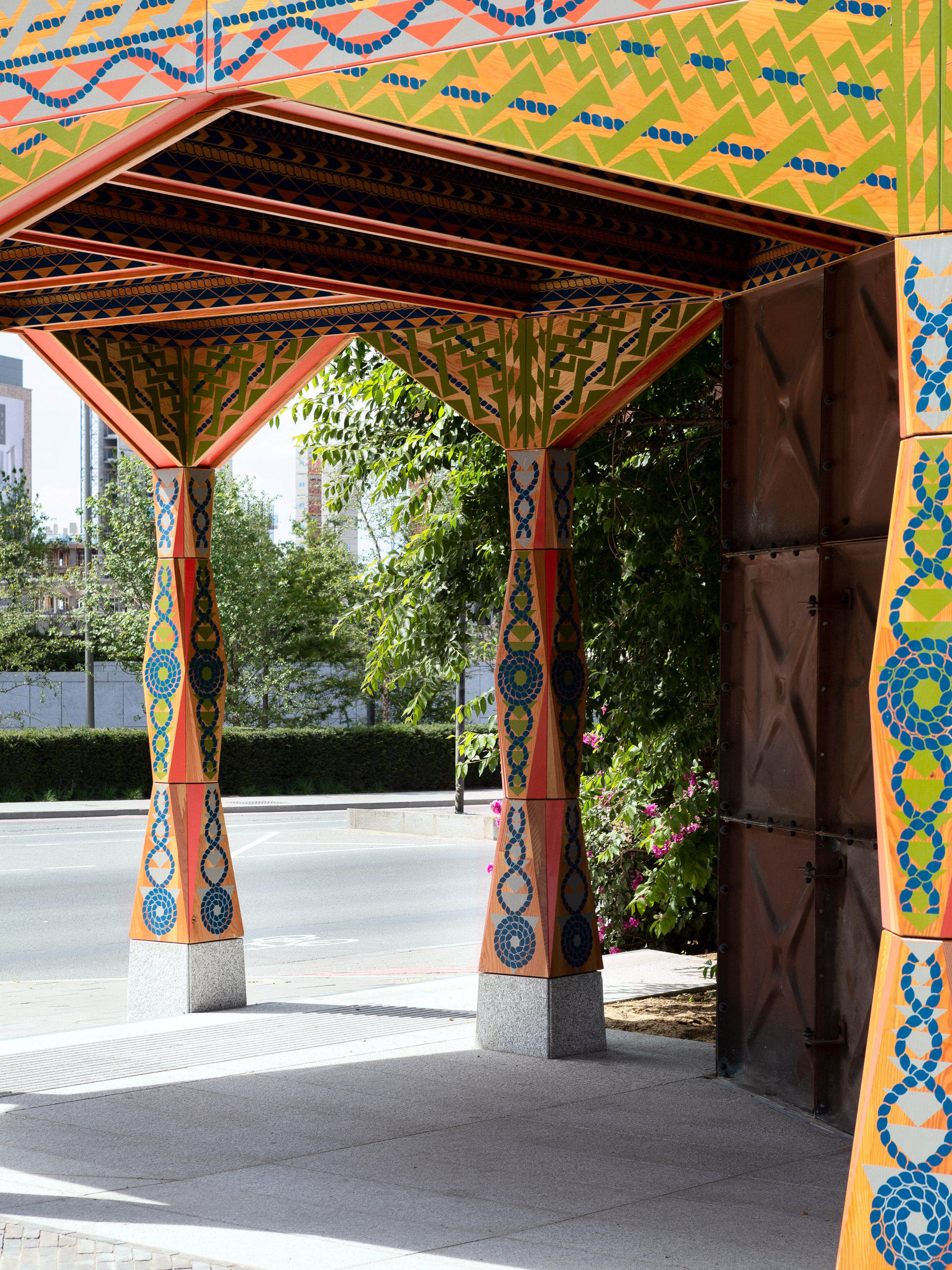 The bright pavilion is also designed to be a celebration of the re-opening of the Thames-side path, which has been closed while Nine Elms – including the nearby Kieran Timberlake-designed US embassy – was developed.

“The colourful support structure is a celebration,” said Ahn, “a celebration of the opening of the path after much needed renewal, masterfully designed by Churchman Landscape Architects, and Nine Elms’ historic structures that were once painted in vibrant colours.” 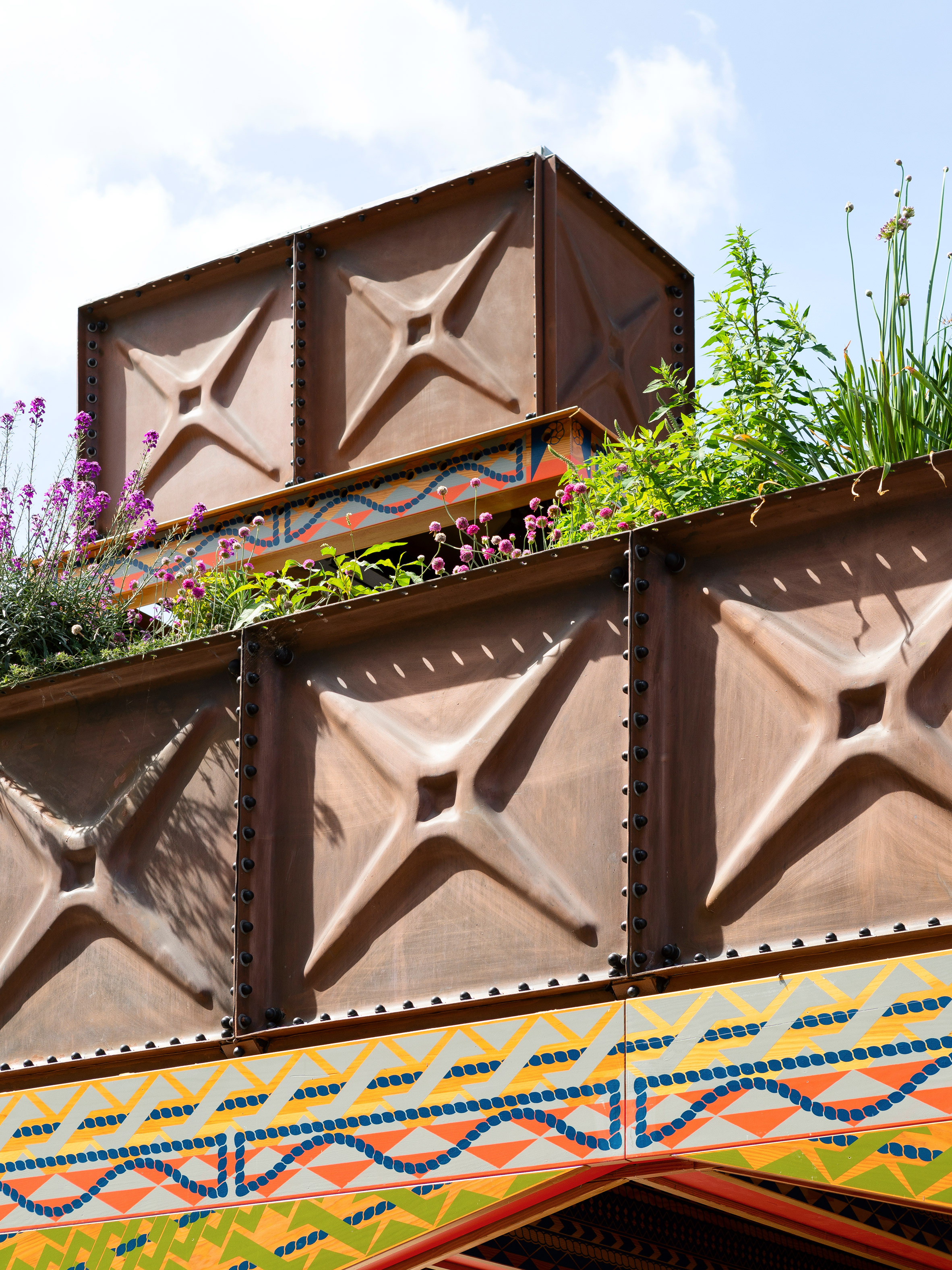 The project was completed in collaboration with Churchman Landscape Architects, which has been enhancing the Thames Riverside Walk that stretches from Lambeth Bridge to Battersea Park.

Along with the pavilion, planters made from the same copper-coated water tower panels have been installed along the path. 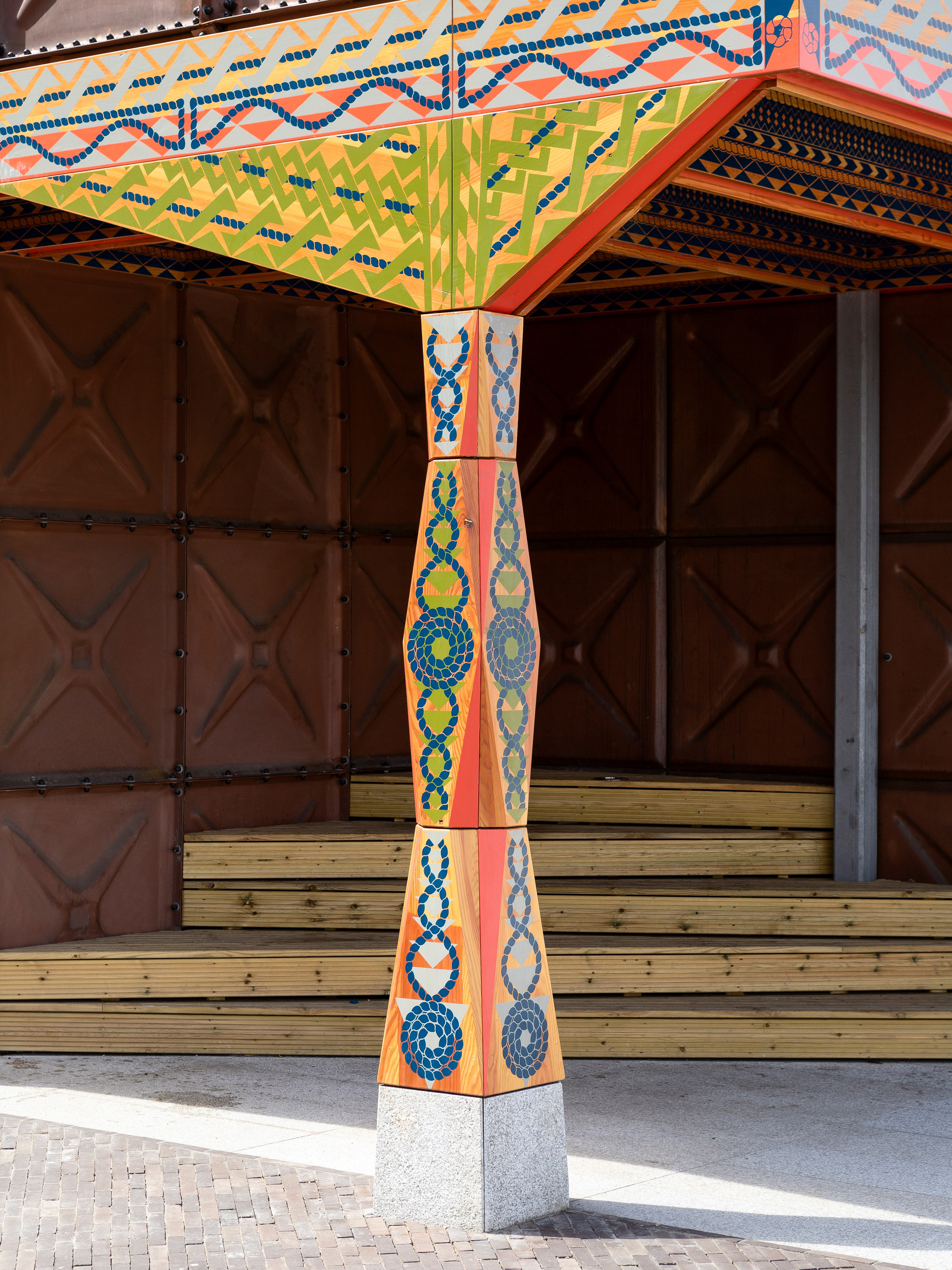 Studio Weave recently completed a school with double doors that slide back to connect the classrooms with its woodland setting. For the Olympic Games in 2012, the practice created a latticed timber hut on stilts in Hackney.

Photography is by Ollie Hammock.